How to make png maps after bike trip

I’m talking about how to make maps like this one that I often post after a bicycle tour: 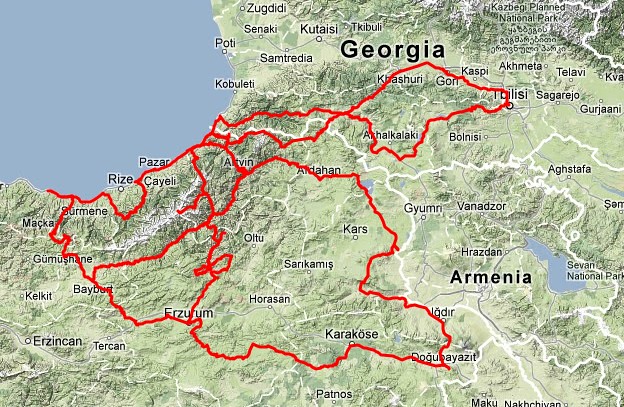 I’ve been making these maps for years, and I’ve gone through many different processes/workflows to produce them.  There are even some old notes written in the comments of that photo/map.

Make a track of the route

At the end of each day when I’m bicycle touring, I mark on a map with a highlighter the route that I’ve taken.  I used to use those maps to make the digital track of my route.  However, now I’ve started saving my route with a gps.  Still, unless you’re quite organized, you’ll probably be missing part of your route (because you forgot to turn the gps on, the file got corrupted, your battery ran out (all these happened to me on the very first trip where I recorded my route), whatever).

I use gpsies.com to the make the tracks of the entire route or whatever portion I’m missing.  That website has a “follow roads” option which you can turn on and off as needed.  You can output as either kml or gpx (or other options).  I used to do all kml, but now that I’m recording gpx files, I use gpx files.  There’s a short bash script on this page to combine multiple gpx files into one with gpsbabel.

Bring the gpx into gpsvisualizer.com to create the image that you want.  Note that gpsvisualizer.com has a 10MB limit for the (total) size of the gpx file(s).  If you need to simplify/remove nodes/reduce the size of your gpx, you might try something like this:

where error can be thought of as fuzzy tolerance — as it goes up, the line loses more nodes, and the file becomes smaller.  0.001k is one meter.

For the background map in gpsvisualizer.com I usually use “google terrain”, but there are other interesting options like

This can be problematic if your screen is small.  Abduction works well (or at least used to) in Firefox.  I’m currently using Nimbus with Opera.  Now you can save your screenshot, crop it, or whatever in your favorite photo editing software.