Turks like to travel, and many have travelled a lot in their own country.  When I ask about their favourite place to visit, their eyes light up, they smile, and they start gushing about Artvin.

Before we could get to Artvin, however, we had to climb another pass.  Actually Sage pointed out roads on the map that go around the mountains.  She’s never been on such a squiggly bike tour before where the apparent goal is to find the roads that climb the highest.

Don’t worry!  Just ’cause she showed me roads that don’t climb so much doesn’t mean we actually took them.  She likes the climbing as well, and after a couple warm-up descents on her new bike, she’s now barrelling down the hills faster than I am.

Sage, however, isn’t a big fan of lightning and gets particularly scared when the thunder and lightning crack simultaneously.  This phenomenon has been disappointingly difficult to avoid the last week.

Before the big climb to Artvin, we took a side excursion to Tortum Gölü and Tortum Şelalesi.  The long, skinny lake along the river was naturally dammed by a landslide somewhere between 200 and 2,000,000 years ago.  Geologists aren’t sure.  Part of the reason to visit was for Sage to see the tourist scene in Turkey.  She’s been a little surprised how few tourists we’ve seen.  Well, the lake had none, but there were groups of Turks picnicking at the waterfall. 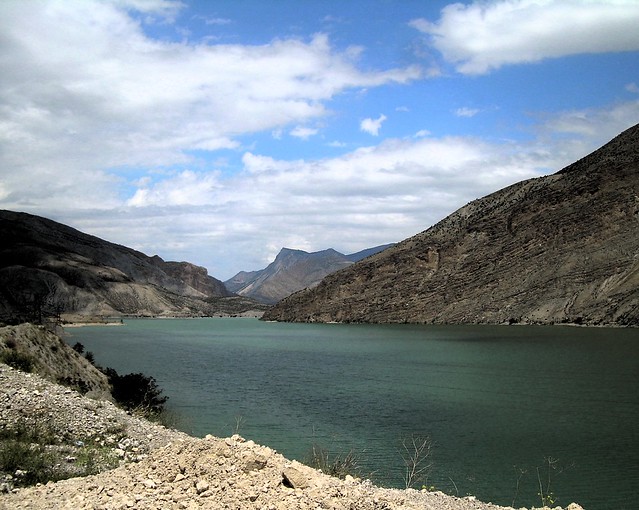 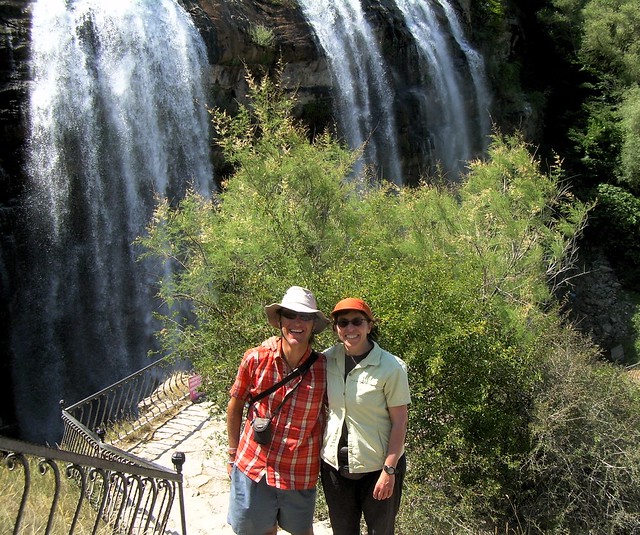 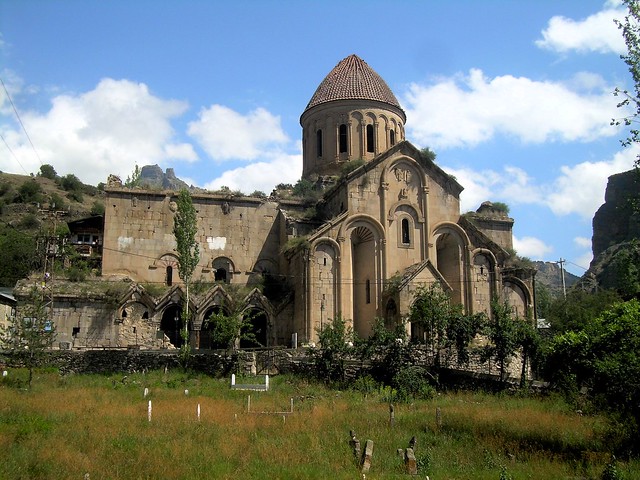 From there the climb started — up, up, up we went.  From the fertile valley to the dry hillsides, to the pine forests, and up to the alpine where a cold wind was blowing. 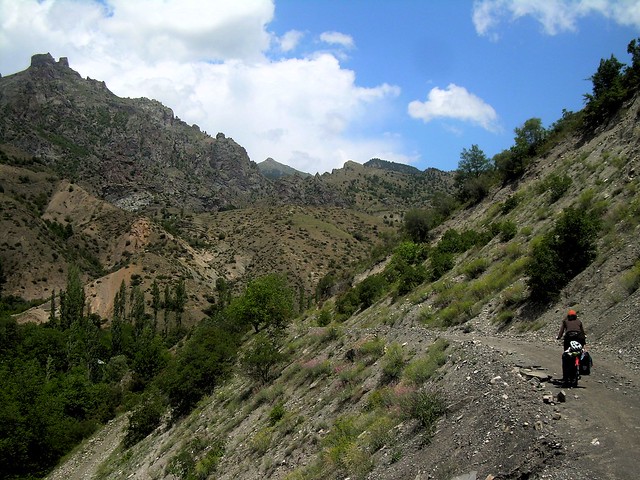 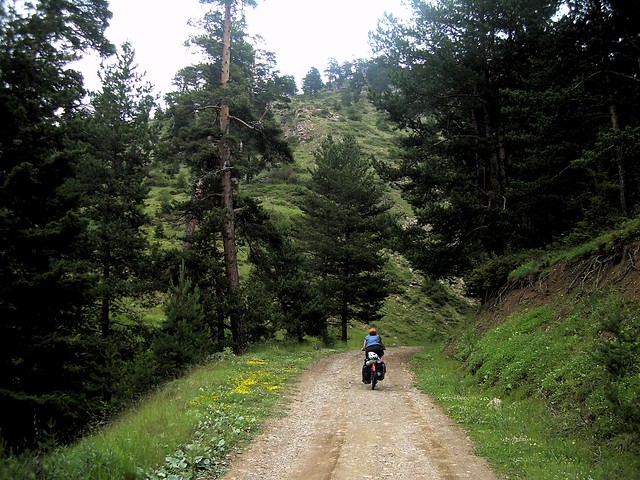 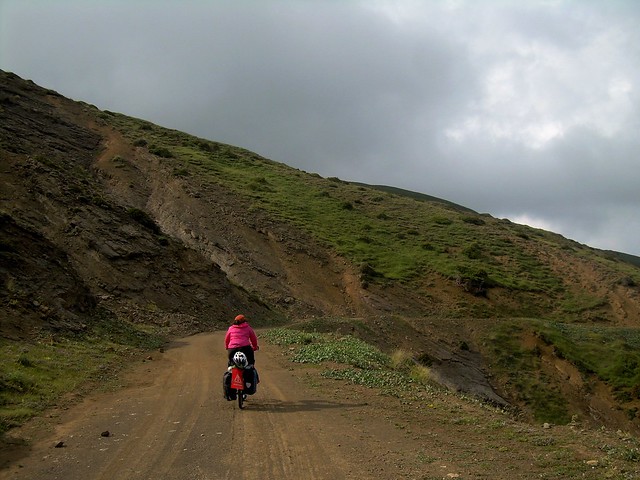 Anticipating a fast 1800m descent to Yusufeli, we took such a leisurely morning that we got caught in the afternoon thunderstorms as soon as our bikes were packed.  Lots of lightning and 15 minutes of hard hail.  I knew that bike helmet would come in handy.

The first 500m (vertical) of descent was fast and beautiful.  We came to an intersection, consulted our map, and went straight.  The next 200m (horizontal) took two hours.  As we wallowed in the mud, a shepherd came by and assured us we were on the wrong road.  We had already decided that.  He pointed us down to Kılıçkaya, an alternate, non-muddy way to Yusufeli. 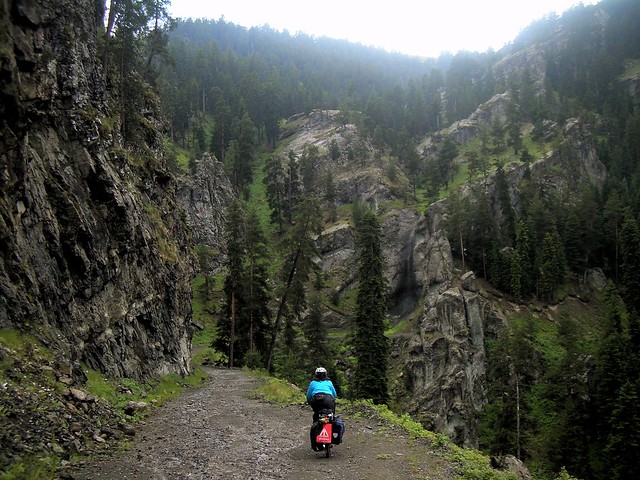 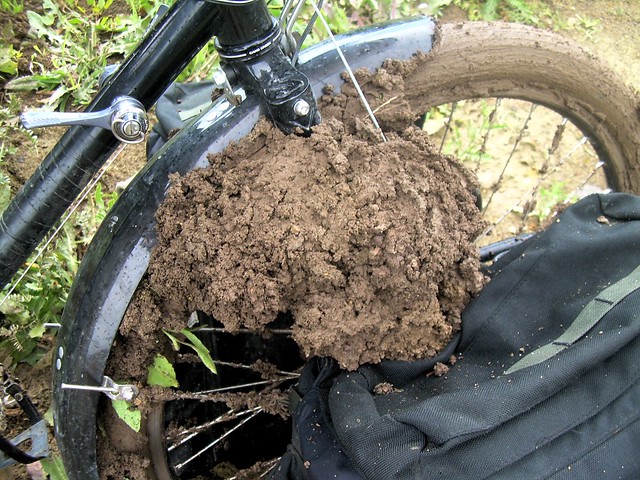 What a spectacular descent it was.  On and on and on.  Sage can’t understand why cyclists haven’t discovered Artvin.  There are so many cyclists on the incredible routes of Central Asia that she’s ridden.  She’s compared landscapes and roads we’ve been on in Turkey to those in Mongolia, Pakistan, and Kyrgyzstan and is surprised we’re the only cyclists out here. 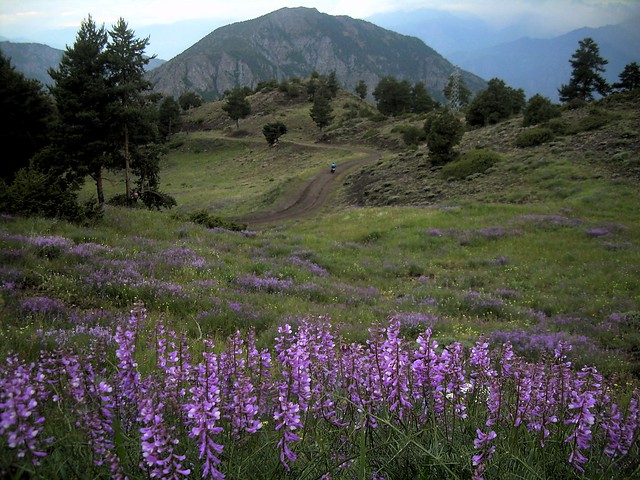 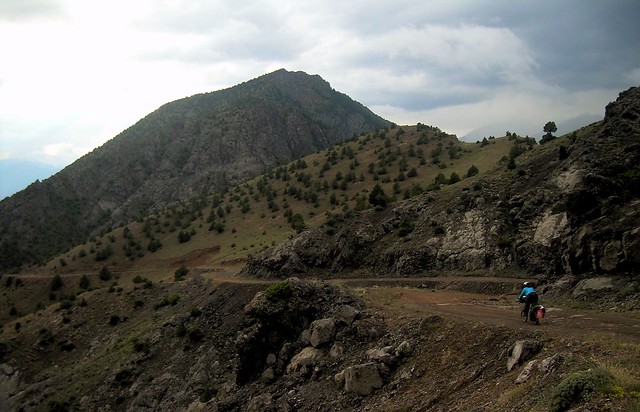 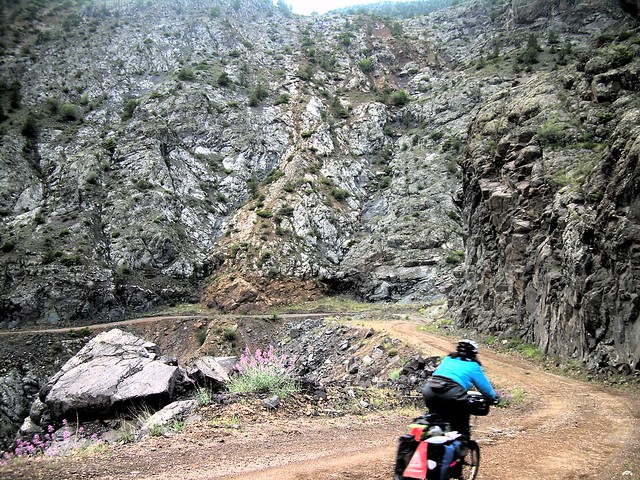 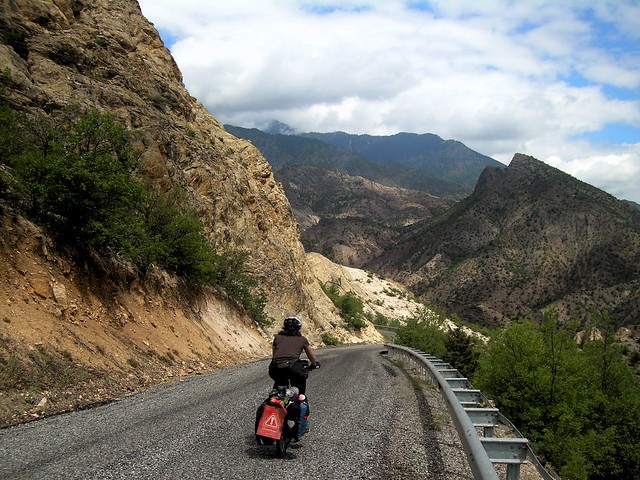 And then we got to the Çoruh.  If Turks’ favourite province (İl) is Artvin, well their favourite place in Artvin is the Çoruh Valley.  The mountains are big, the canyons deep, and the colours spectacular. 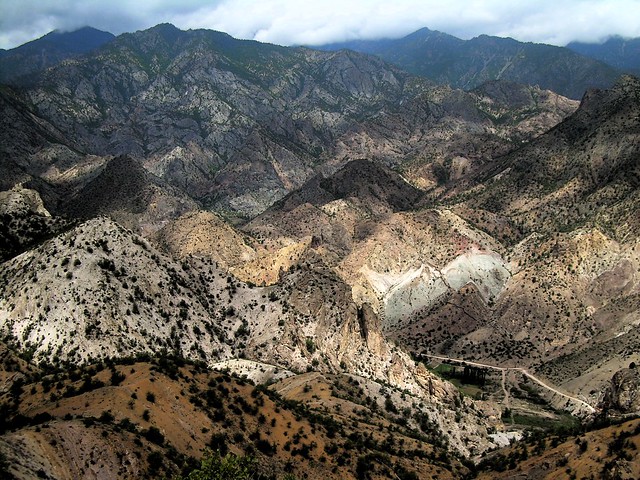 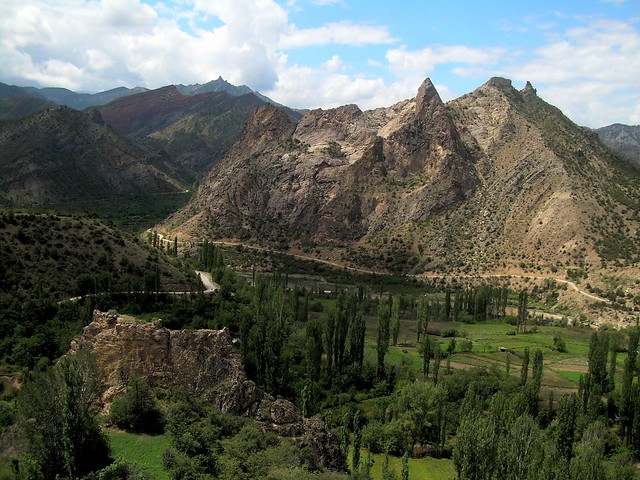 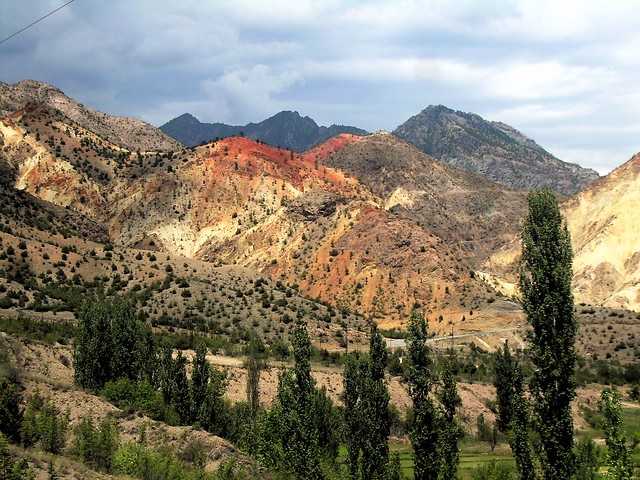 1800m down from the cold mountains to hot Yusufeli.  Obviously time to climb again…

I found the huge landscapes and endless mountains very difficult to photograph.  In some places the photos look more amazing than the real thing.  In Artvin the opposite is true. 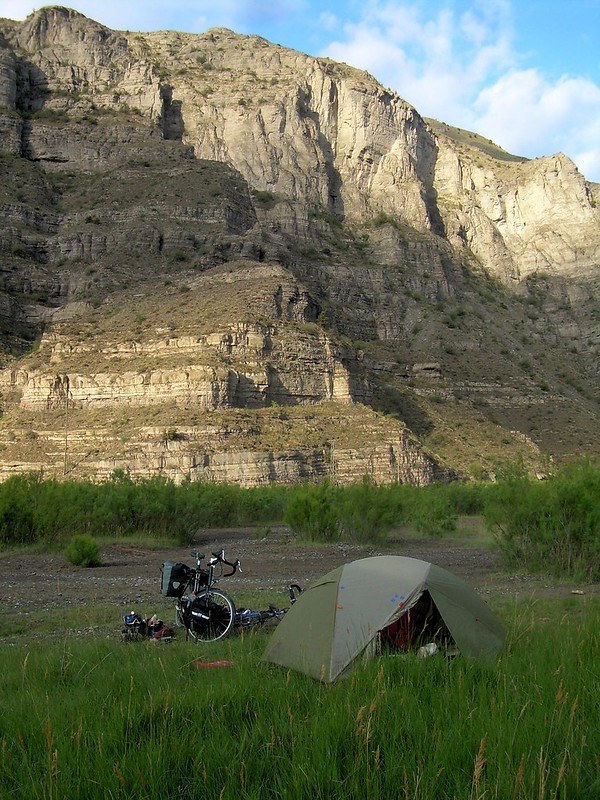 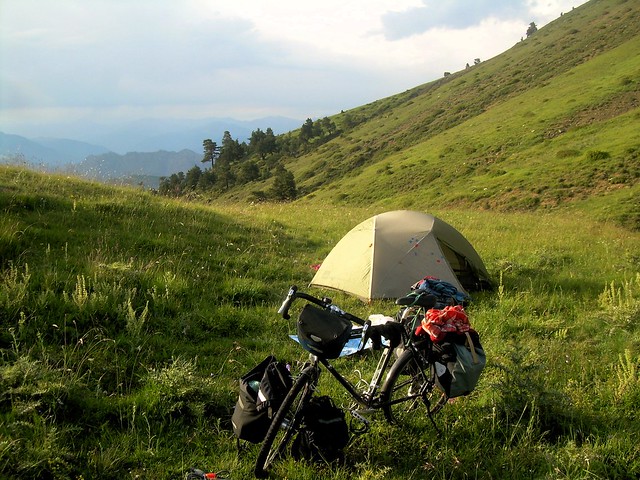 3 Responses to Artvin’s worth the effort!