Riding into a fairy tale

After buying a large stack of maps in Berlin, my plan for leaving the city was to not use a map at all.  I simply headed south looking for roads that looked friendly to bikes.  Berlin is a city of bikes with infrastructure to match.  I was on dedicated bicycle lanes or paths almost the entire way out of the city.

South of Berlin is flat with lots of roads and villages so I just continued south in the direction of Dresden.  I sat in the small park in the middle of Trebbin for the first of many, many lunch stops and was treated to a full orchestra concert.  The philharmonic was rehearsing at the concert hall next door for an upcoming performance.  Off to a good start, I’d say.

I crossed the bridge to Dresden a day or two later and was blown away by the restored old part of the city.  The reconstruction here reminded me of the impossible task of rebuilding the Tell Halaf statues.  OK, in Dresden they didn’t use the same rocks in the same places, but they rebuilt an entire historic center from rubble.  Tourists love this place of course, and there were swarms about on this beautiful sunny day. 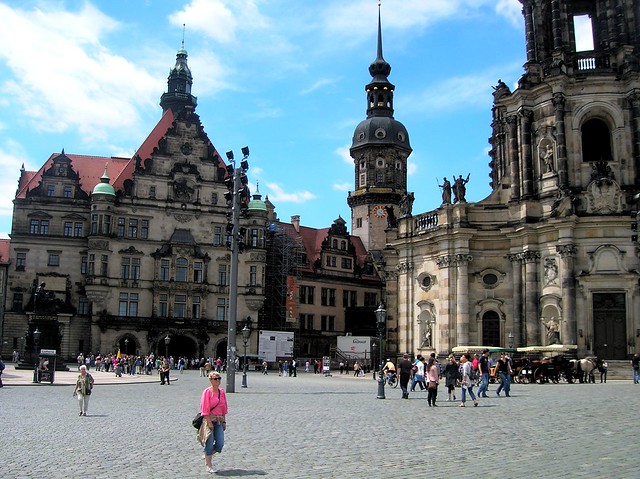 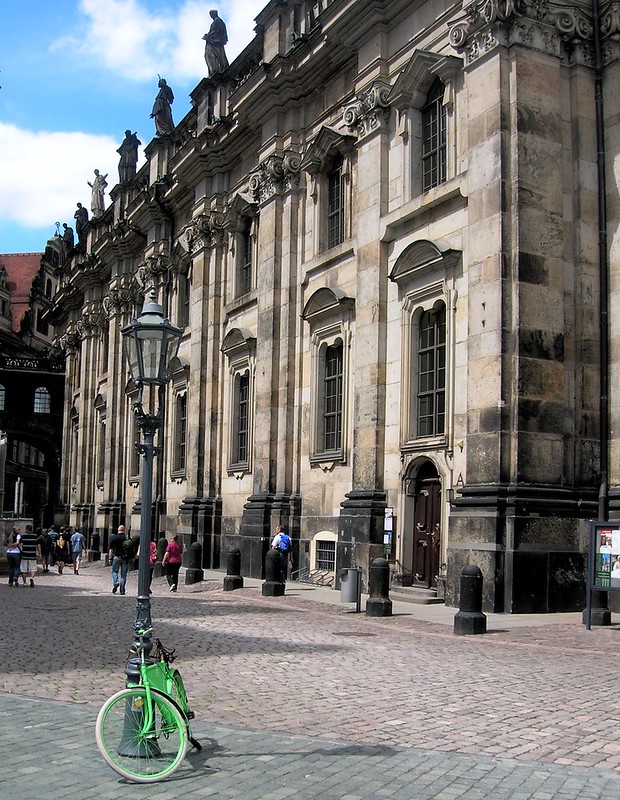 From Dresden it was SSE to Prague.  Not paying any attention to topography I stopped in Kreischa after a climb.  Manfred pedaled up as I was studying the map.  He learned I was going to Prague and chastised me for not taking along the Elbe cycle route.  “Das ist best,” he insisted.  He bought me a beer at a nearby café and pulled me right back down the way I had come.  So I found myself doing the first drafting of the trip on a fast, narrow downhill with a bit of traffic after gulping down a beer.  It was great.  In no time we were at the Elbe.  Manfred said goodbye and took off toward Dresden while I went in the other direction.  To Prague.

Manfred at the Elbe: 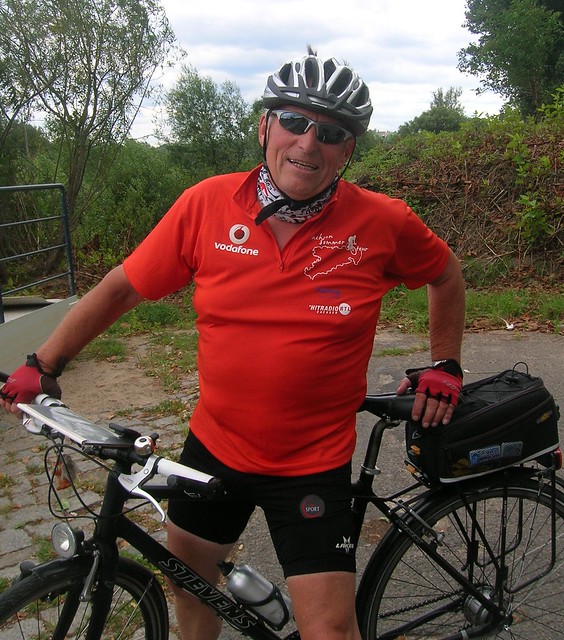 I ended up following the Elbe/Labe (depending on which side of the border you’re on) all the way to Roudnice.  I’ve been all excited about this non-automobile border crossing between Ukraine and Romania that I’d like to take, and lo and behold I crossed from Germany to Czech on a bike path! 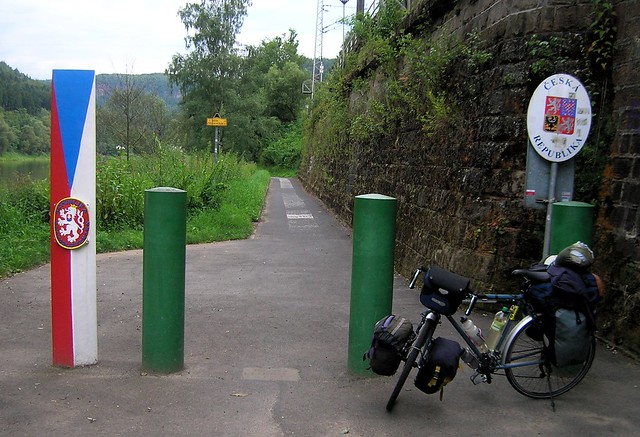 It was a warm Friday afternoon when I crossed the border.  The following day was perfect weather as well.  It was wonderful to see so many Czechs out walking, jogging, roller-blading, and cycling.  On the river they were canoeing, paddling, rowing, water-skiing, and sightseeing on larger boats.  There were fancy bikes, helmets, and spandex, and also young and old couples out for casual picnics.  I saw more bicycle helmets in Czech than in Germany, and I’ve been continually surprised by the number of kids in Czech. In spite of Europe’s falling birth rate, they’re still reproducing here. 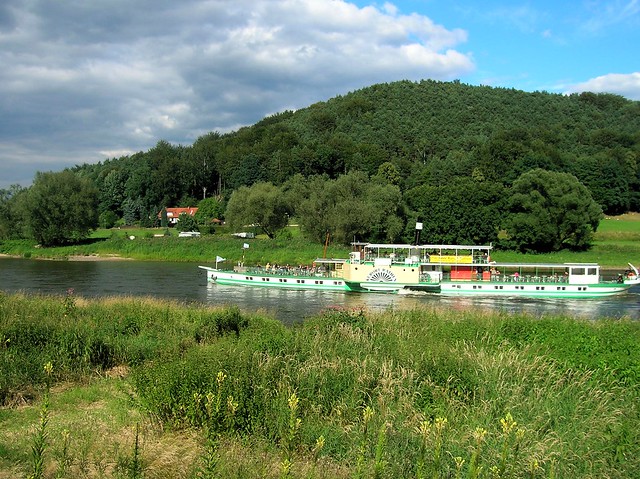 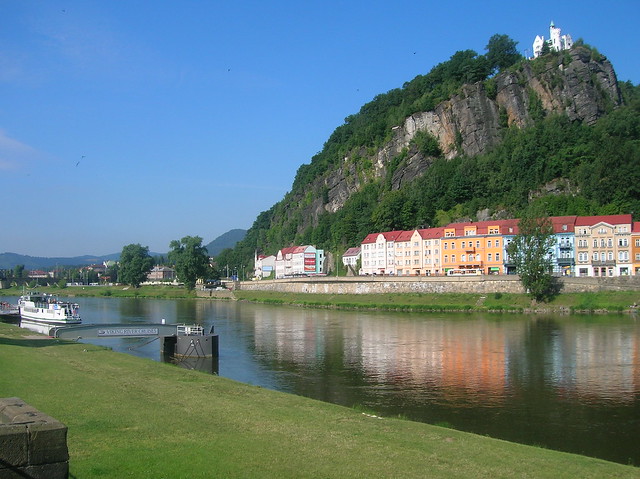 Another day or two brought me to Prague.  My first impression of this magical city was that it was a hot, crowded construction disaster.  I was tired after the quick trip from Berlin so I couldn’t see the good things that day.  The Charles Bridge was so crowded I couldn’t even see it: 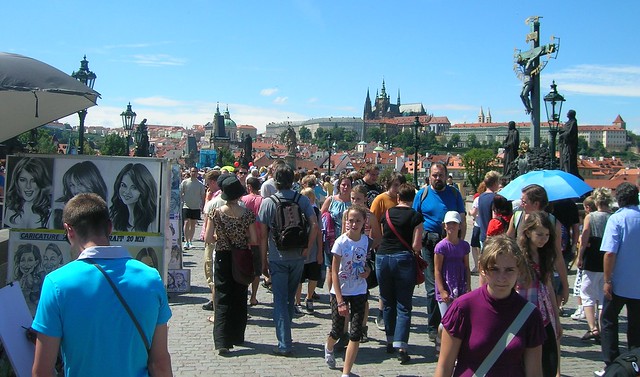 In the afternoon I made my south to Ondrej’s house.  He was so welcoming that it made for an easy decision to stay another day.  I needed the rest day, but I did manage to get out and explore the city some more.  That was fantastic because I can see why people fall in love with Prague. 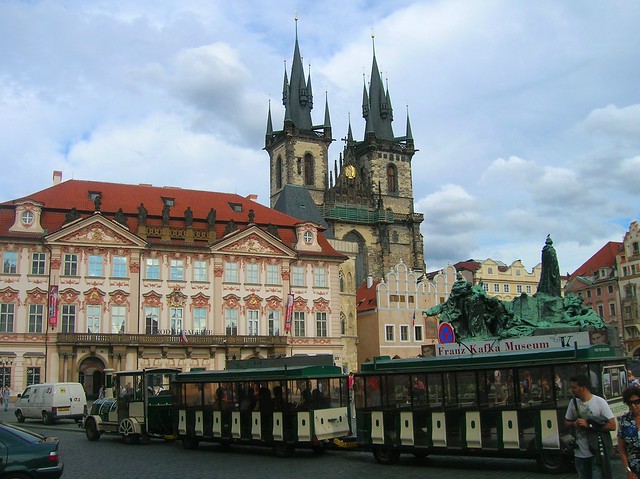 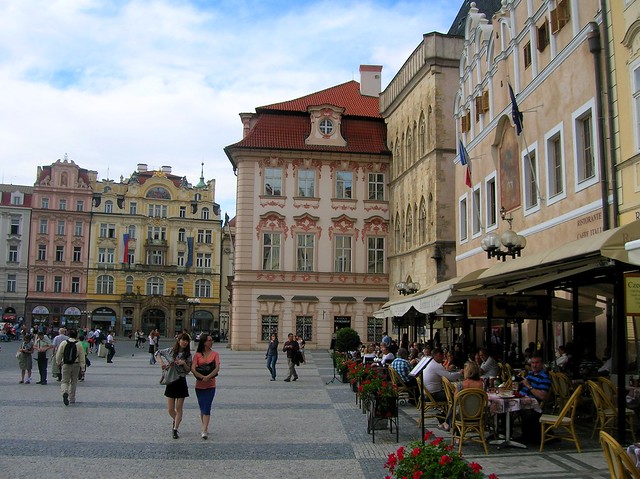 For starters, being Monday, it was much less crowded, and it was also much cooler than the  day before.  But seriously all those old incredible buildings lined up one after another on street after street after street.  Sometimes I had to pinch myself to remind me that it was real and not some fairy tale dream.  I went on a quick tour of the grounds at Vyšehrad with some nice city views, and then I spent most of my time poking around the large pedestrian area in the middle of the city which includes a couple of Prague’s most famous plazas.  That’s all I had time for during my short stay.  There’s certainly more to see, but that’s always the case.

Touring through the Czech countryside is pretty fantastic.  There are marked bicycle routes throughout the country that often go on roads with almost no traffic.  The big highways (orange and red on my map) are to be avoided, but there’s a great network of fast secondary roads (yellow), often without much traffic.  Then there are the small roads connecting villages.  I often took these roads between villages without a single car passing.  The marked bike routes frequently end up on farm roads or forest roads.  I’m not even sure if I’ve seen a car on any of those yet.  Villages are closely spaced — population density seems high — and often have a restaurant and pub where cyclists have stopped to have a beer.  Fairy tale land! 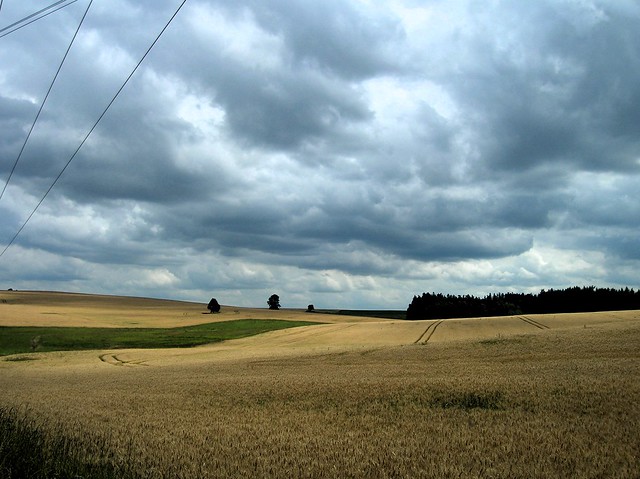 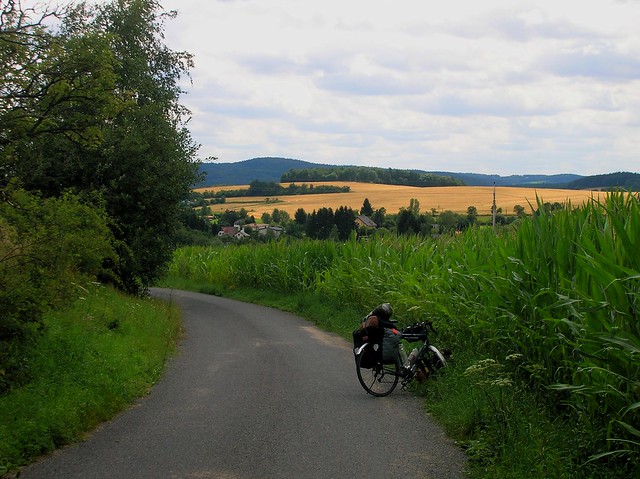 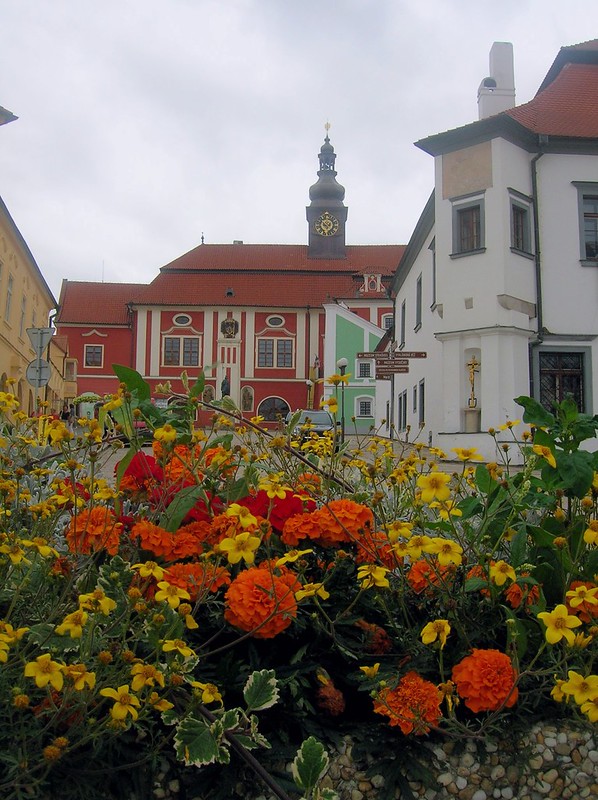 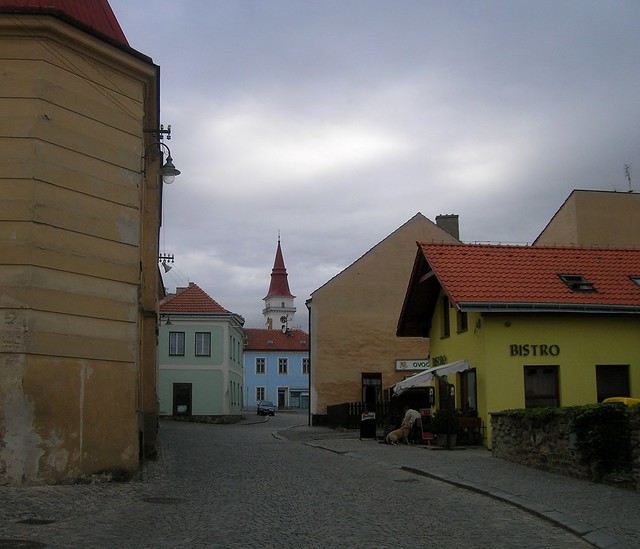 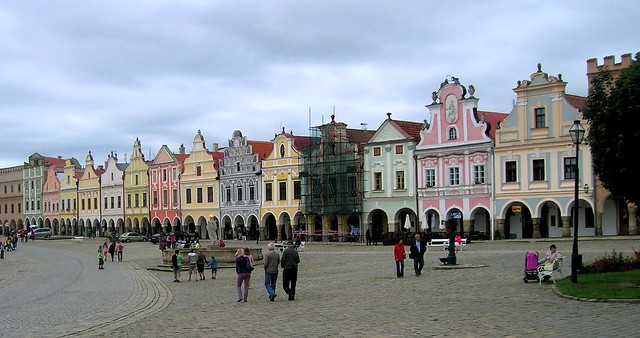 4 Responses to Riding into a fairy tale