Children stood by the side of the road, smiling, waving, and greeting “ahoi” when we rode by.  Long climbs over a pass followed by long descents reminded me of the mountain riding that I love to do in Colorado.  6 UAH for a beer, 80 UAH for a room in a guesthouse in Rosluč, 5 UAH/hour for internet in Staryj Sambir: sounds like prices in Thailand, not Europe (US$1 = 8 UAH).

Although the mountains felt wilder than in Poland or Slovakia, the views weren’t spectacular.  The Carpathians are not the French Alps or the Colorado Rockies.  But the biggest problem, I think, is that the towns were depressingly, consistently ugly.  I didn’t see one beautiful square, picturesque village, or lovely church.  Ok, maybe a couple nice, old wooden churches. 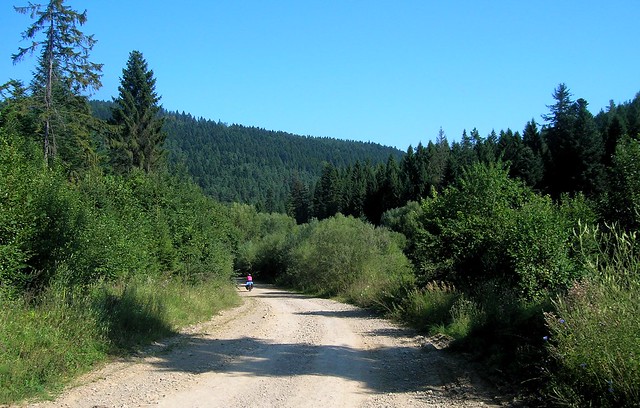 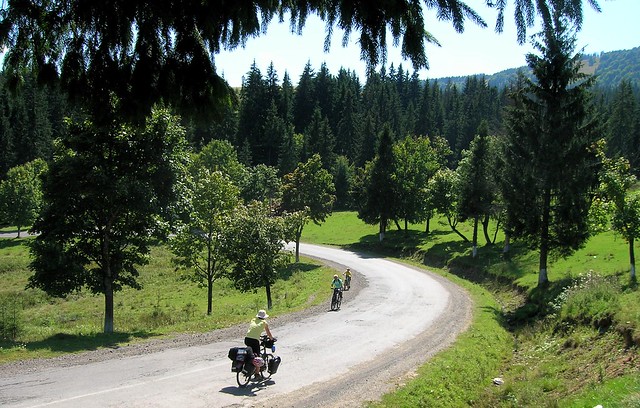 About two days after the border crossing at Krościenko which, by the way, doesn’t allow cyclists — it’s necessary to flag down a vehicle and get in it to cross (bah!!!) –, we were again very close to the border with Poland.  Three times in less than 24 hours in this area, I was asked for my passport by Ukrainian border patrol agents.  Each time they looked for the entry stamp.  They were polite and business-like.  I couldn’t help thinking about the Ukrainian woman who I sat next to on the bus from Atlanta to Orlando.  On our next leg to Miami, she was taken off the bus and handcuffed by US border patrol agents at an internal check near Ft. Lauderdale.

Rarely have I seen such dramatic changes across the border.  Going from Poland to Ukraine was like crossing from the US to Mexico or Thailand to Cambodia.  Good paved roads turned into pot-holed disasters.  Buildings were crumbling, old, half-constructed, unpainted. 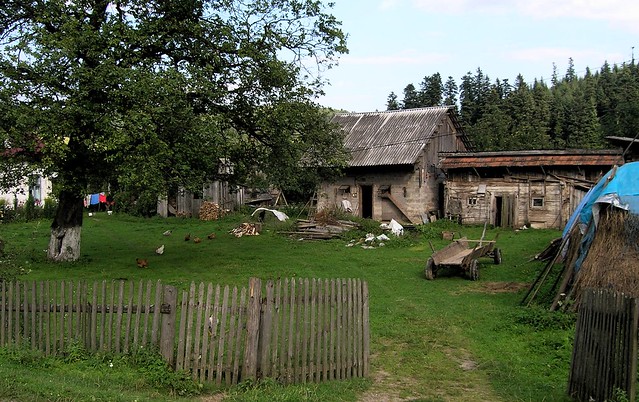 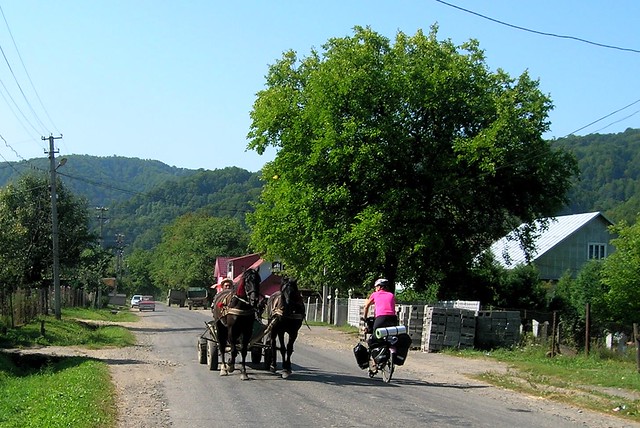 Many (most?) intersections were unmarked, but larger, better roads did have roads signs.  This optimistic sign: 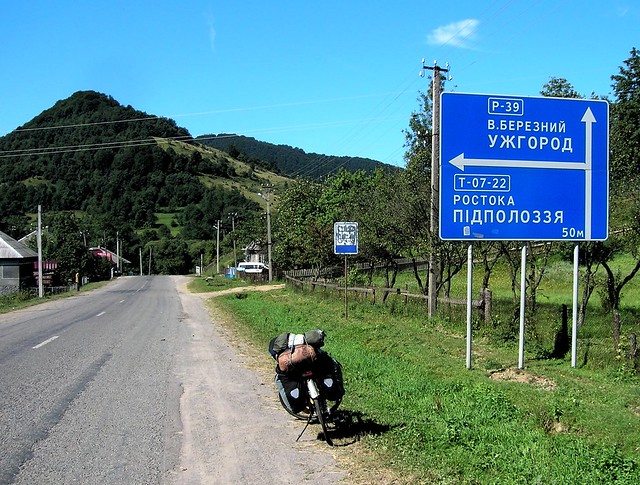 indicated the turnoff to this road: 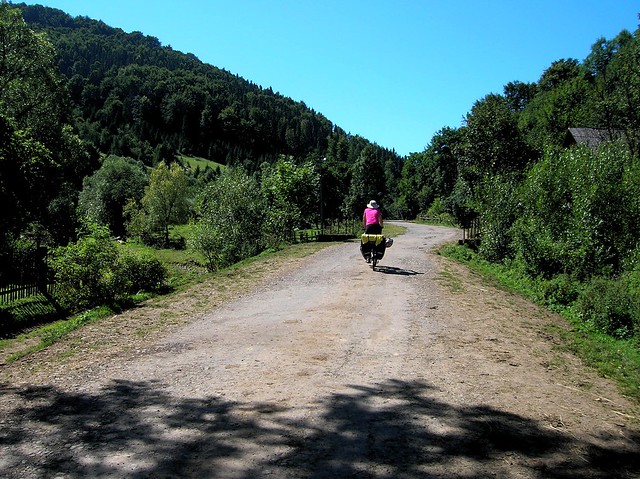 which soon deteriorated to this: 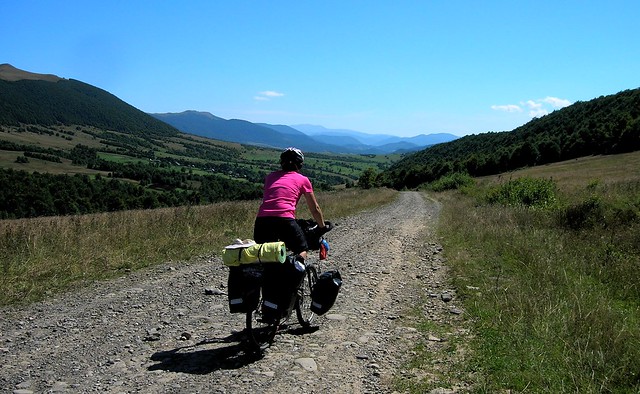 Over that pass I think I saw one cyclist, a group of Polish tourists wondering if they could get their two low-clearance vehicles through one of the rockier sections, and one local motorist in a boxy Lada. 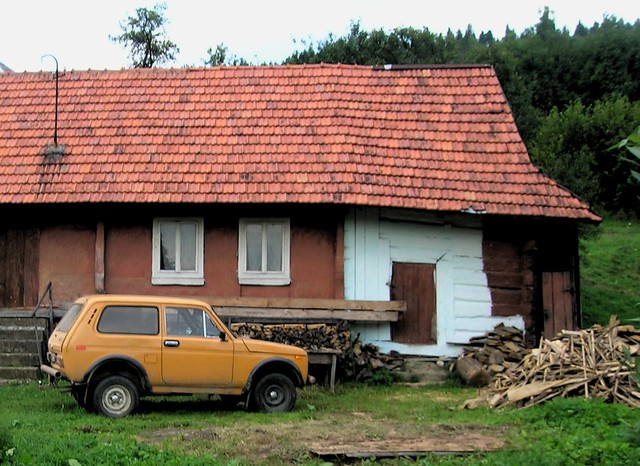 The heat was a surprise.  Every day was hot, and we rested in the shade for a few hours in the middle of each day.  Occasionally we found pleasant places to hang out for lunch, but more commonly we ended up in some dirty town, amusing ourselves by watching the traffic go by while sampling the local kvas and beer.  It was, at times, hilarious.  I couldn’t help laughing when a 10-year-old scooter driver wasn’t even strong enough to push the scooter onto the kickstand.  I had no idea that so many WW2 transport trucks were still in use, and the 30-year-old boxy police cars with a single siren on the top driven by a couple men in funny hats looked like they were straight out of a cartoon.  Sneki and I laughed out loud and asked ourselves, “is this for real?” 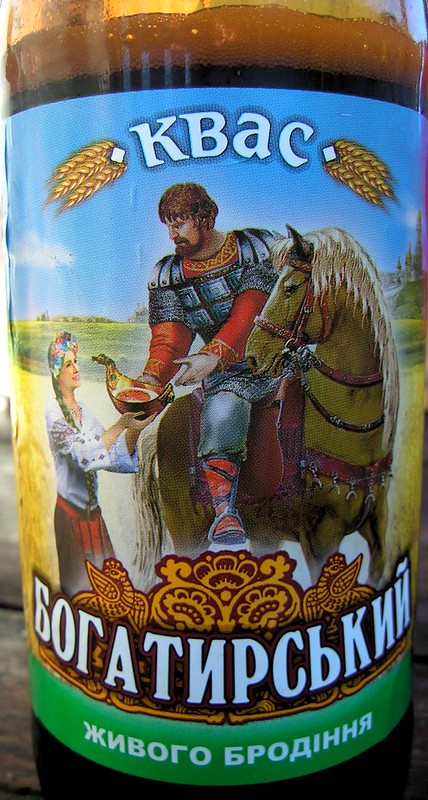 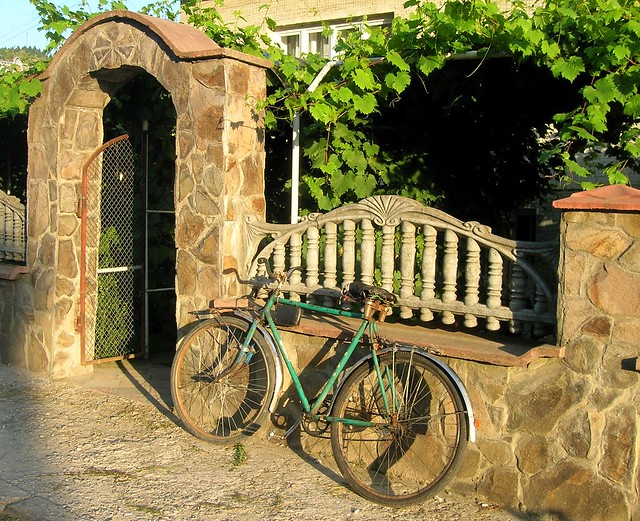 After one week, I feel like I never really went anywhere in Ukraine, just sort of floated through.  Seems like something interesting or significant should have happened, but it never did.

I was so looking forward to the no-vehicles crossing into Romania at Sighetu Marmaţiei, but, alas, it doesn’t exist.  I’m not sure where I got my information.  The bridge is wide enough for cars, and cars are allowed.  Hello, Romania. 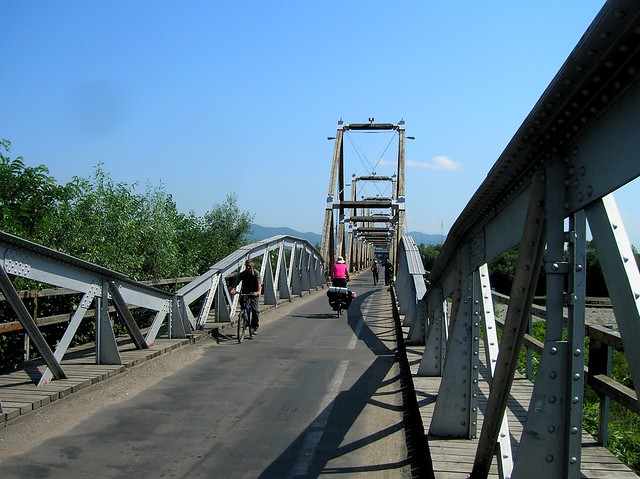 This entry was posted in Bicycle touring, Ukraine and tagged Ukraine. Bookmark the permalink.