A great first impression in Romania

Well, I haven’t been in Romania long, but, wow!  I’m quite happy that the largest part of the Carpathians are in Romania.  So far so good.  It’s a land of enchantment, a fantasy world à la Tolkien.  Sometimes I feel like Bilbo Baggins going from cute village to cute village, then up the rivers and into the wild mountains with views of more mountains fading away into the mist. 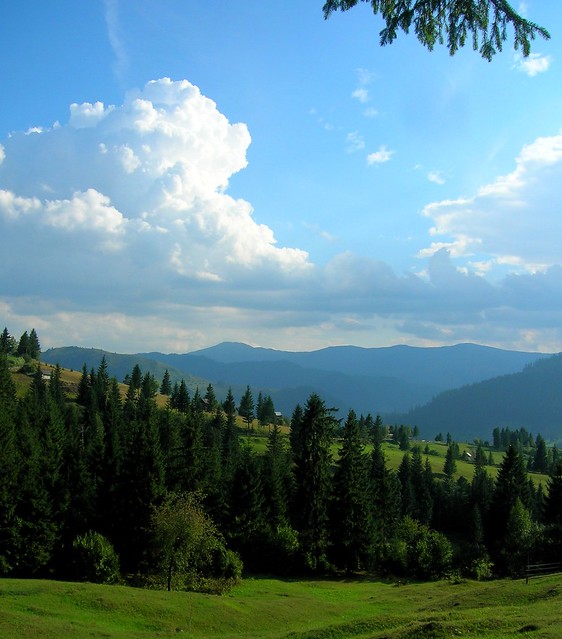 We’ve met a number of characters:

A chatty roadside mushroom seller.  Well, she was quite talkative once she found out Snežana was from Serbia and then she wouldn’t stop talking (in Serbian) about her Croatian friend (lover?).  It must have been Sneki’s longest conversation in Serbian since we left Bratislava.  Oddly, in the end she wouldn’t sell us any mushrooms.  I never did understand why.

Grigori and Mihali, the farmers from Borşa who welcomed us when I asked to camp in their yard.  That night they treated us to fresh milk.  I mean really fresh: 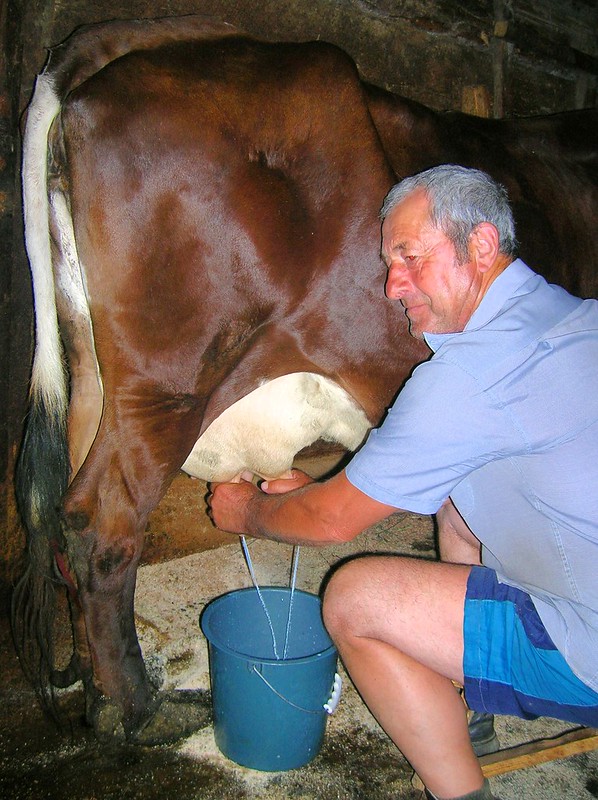 and the next morning they treated us to a large pot of polenta swimming in oil and full of cheese.  Mmmm, so good.  Then Mihali insisted that Snežana wear the traditional women’s village outfit for a photo shoot.  This was funny.  A day or two earlier I was wondering how there could possibly be so many old, short, fat Romanian women.  Well, it’s only old women who wear the traditional outfits, and these outfits somehow make even a tall, skinny cyclist look short and fat! 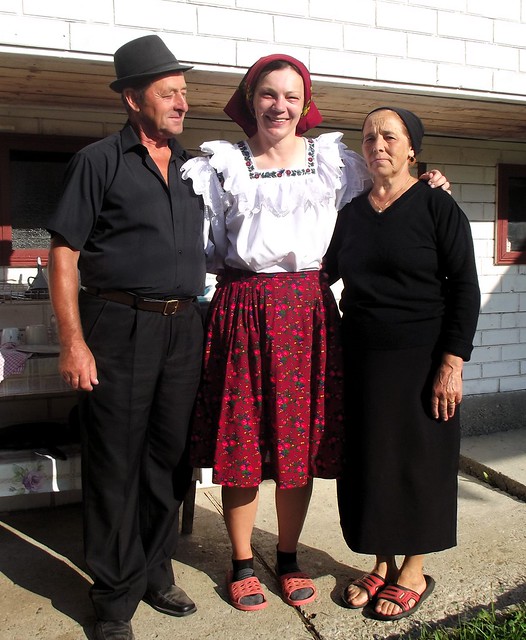 Vladimir, another talkative character and a great cook.  After dinner and much ţuică (too much?) and a few beers, he tried to teach me some basics of Romanian pronunciation.  I don’t think it was all lost on me.  A (pronounced as in Spanish) is different from ă and â, both of which apparently have sounds that don’t exist in English or French (the languages in which Vladimir and I most successfully communicated).  For now I’m going with a gutteral u.  I also spent way too long trying to pronounce i at the end of a word.  When I decided to ignore it completely, Vladimir declared the pronunciation perfect! 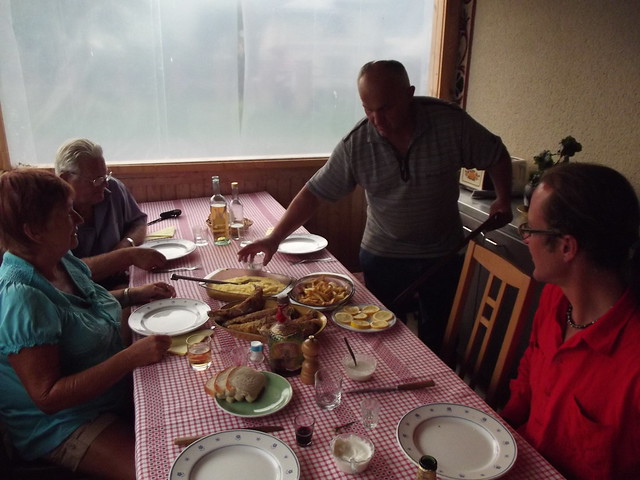 The old, fat man in Vatra Moldoviţei who replaced 10 pitted bearings in Sneki’s front hub.  He could barely walk, and I doubt he could ride a bicycle.  When I tried to ask what he was going to do with 10 5mm bearings (the original good ones) and 10 4mm bearings (to replace the bad ones), he smiled and said, “I’ve been repairing bicycles for 28 years!”  He said other things too, but I’ve been practicing the numbers so about the only sentences I understand have mostly numbers…

You can’t actually see the mechanic in this photo, but we were discussing ball sizes when this traffic came by:

I did manage to find mushrooms sellers who actually sell mushrooms.  In Vama, when I showed the slightest interest, I was suddenly surrounded by 5-10 young women pushing buckets of mushrooms at me.  I picked my vendor who ended up being baffled that I only wanted 300 g of mushrooms.  In the end she gave 500 g which went well with eggs that evening. 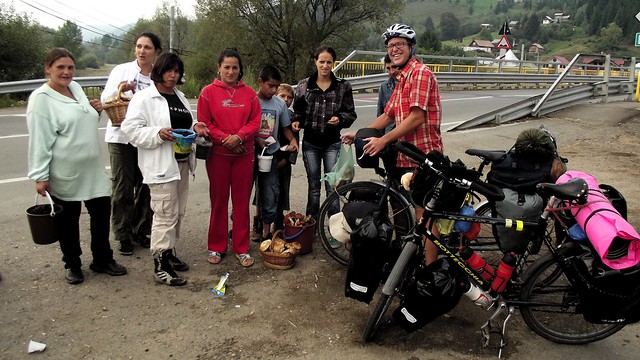 In addition to the colorful people there are green, forested mountains and — things that were lacking in Ukraine — beautifully painted churches, monasteries with amazing flower gardens, and picturesque houses.  Someone ought to take a photo of every house in Ciocăneşti and publish them in a book — gingerbread houses straight out of a storybook, one after another.

After a week in Ukraine, I was oddly thrilled by the clean, colorful buildings and order of Sighetu Marmației, and then, oh my gosh, what a meal one can put together with access to a giant supermarket! 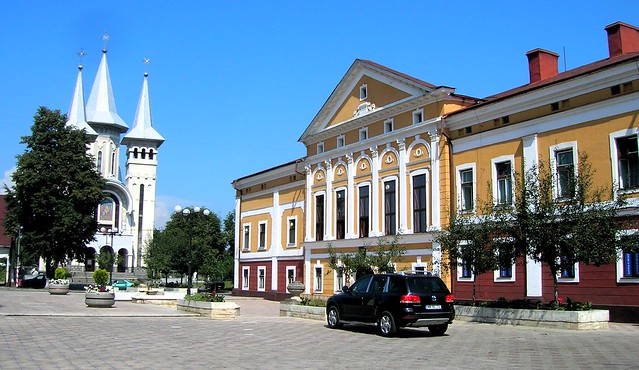 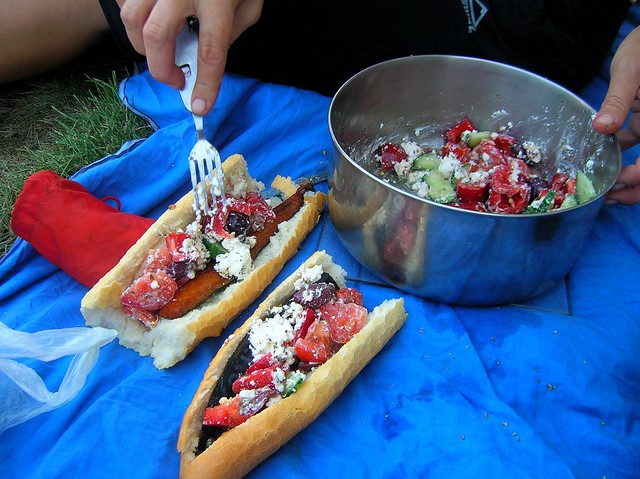 A day or two later we stopped and visited the beautiful grounds of the Bârsana Monastery: 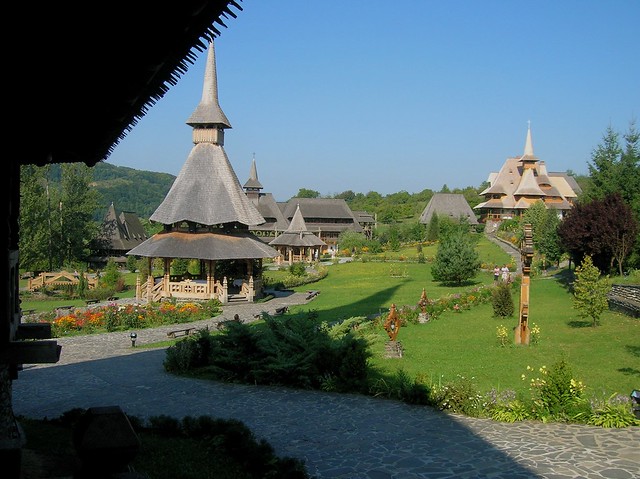 Next on the list after a few, fun mountain passes were the famous (UNESCO World Heritage) Painted Monasteries in Bucovina.  Two were enough for us. 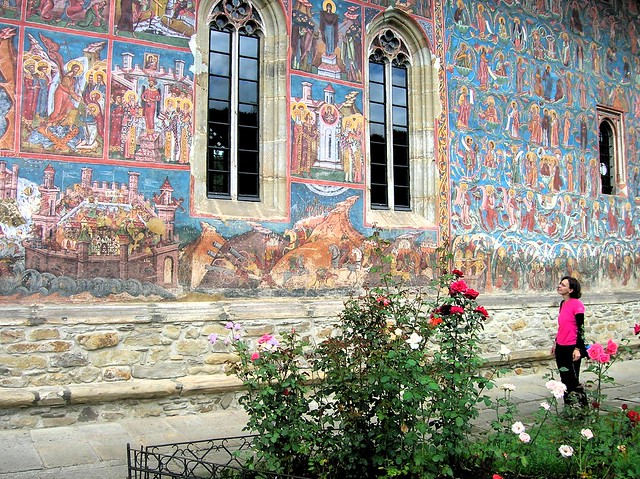 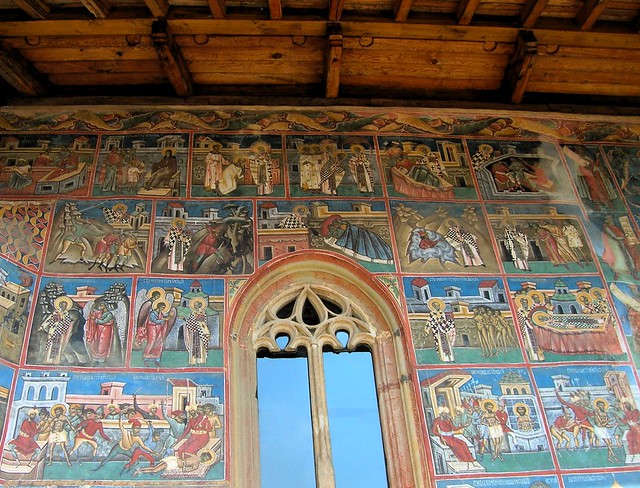 OK, let’s see, if I have to complain about something, it will have to be the trash and the dogs.  I saw river banks lined with plastic bottles, a woman toss a plastic bag out of the window of her car, a child toss an ice cream wrapper on the ground next to her parents.  It will take a big campaign to change attitudes here.  And the dogs, well, a massive eradication effort is in order — wild, barking dogs everywhere.

I certainly can’t complain about the campsites. 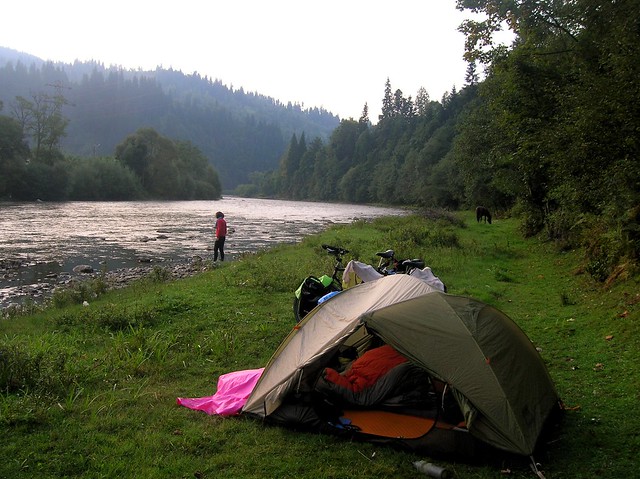 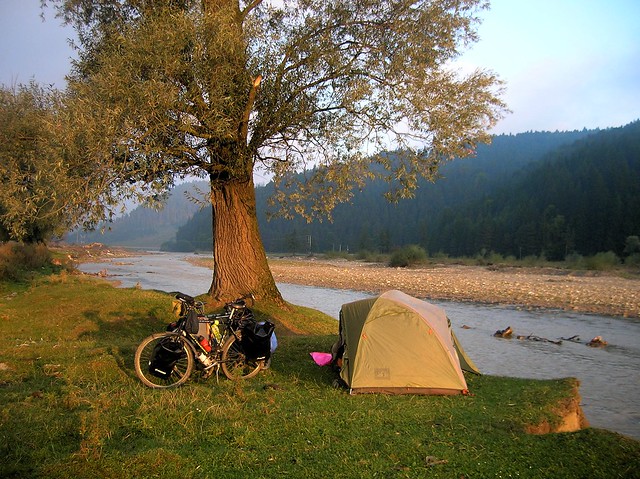 3 Responses to A great first impression in Romania