A small corner of Kurdish Turkey

I’m not sure where everyone started speaking Kurdish.  If it wasn’t Ardahan, it was certainly Kars.  Kurdistan on our route continued through Kars, Iğdır, Ağrı, and onto Karayazı and Tekman İlçes in Erzurum.  Back now in the city of Erzurum, it’s nice, given my language skills, to hear Turkish spoken on the street.

Being Kurdish for some people is specifically not being Turkish while others are happily Kurdish and Turkish as part of the Turkish Republic.  Still other Kurds will barely even acknowledge that they’re Kurdish instead insisting that everyone is Turkish, and it doesn’t matter.  I’m not sure how directly these attitudes correspond to political support.  I certainly felt more comfortable dissing Erdoğan in the Kurdish parts of the country.  No one seemed very fond of him.

The Kurds are mainly represented by the Barış ve Demokrasi Parti (BDP; Peace and Democracy Party) in parliament.  Some folks in Kurdistan (a term that Turks generally disapprove of) voiced support to me for the PKK, which is officially a terrorist group according to the Turkish government and has no members in parliament.  How analogous the BDP and PKK are to the PLO and Hamas is unclear to me.  In Dağpınar I happened to meet the only member of parliament to represent Kars, a tall, skinny woman, dressed in pants and not wearing a headscarf.

The superb, famous Turkish hospitality continued.  However, there was a twist, a dichotomy, let’s say.  No where else in Turkey have I been greeted with “money, money” by the boys.  Telling them it was shameful (ayıp) almost always got them to stop and often look embarrassed.  A couple times adults even asked me for money or, once, for chocolate!  If others folks heard this, they would often apologize for their neighbour’s behaviour.

On the other hand people would give us food and once even a beautiful bottle of olive oil, cheese, bread, basil, homemade jam — I can’t remember what all was in that bag.  That in the same village where young men had persistently followed us pestering us for money.  In one tiny village, Işıklar, a small boy offered me one of his treasured cakes that he was carrying around.  How touching!

In Karabağ a couple kindly invited us to stay at their house where we enjoyed iftar (breaking the daily Ramadan fast) together at the end of the day.  In the morning, however, the man wanted us to fill his motorcycle with petrol — not an inexpensive treat with petrol running around US$9.33/gallon.  Such odd behaviour. 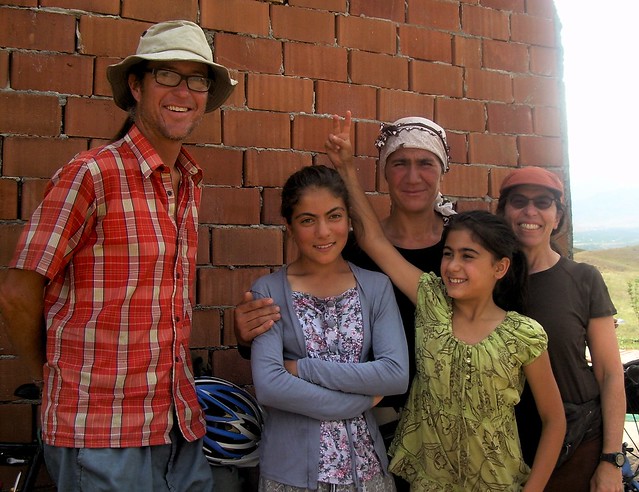 The worst was in Ağrı, where after being treated so kindly at a bicycle shop, a boy approached Sage with a menacing broken glass bottle in his hand.  Not a hundred meters further a boy spit in her face.  What the fuck?!  She was dressed quite modestly in a hat, skirt, and long-sleeved shirt.  Where do some boys learn to spit and others learn to offer their food to travellers?

It’s always boys causing the trouble.  In Alaca one boy in a group tried to stick a wooden pole into my spinning bicycle wheel.  Oh, he got a mouthful from me (in Turkish which almost all Kurds do understand since that’s what they speak in school), getting the attention of some nearby adults who came over and apologized.  This was just minutes after a couple had invited us to have dinner together and spend the night in their house.  Dichotomy indeed.  In the next village over the pass, Oyuklu, it was all girls, some of the sweetest I’ve met and hardly any boys around. 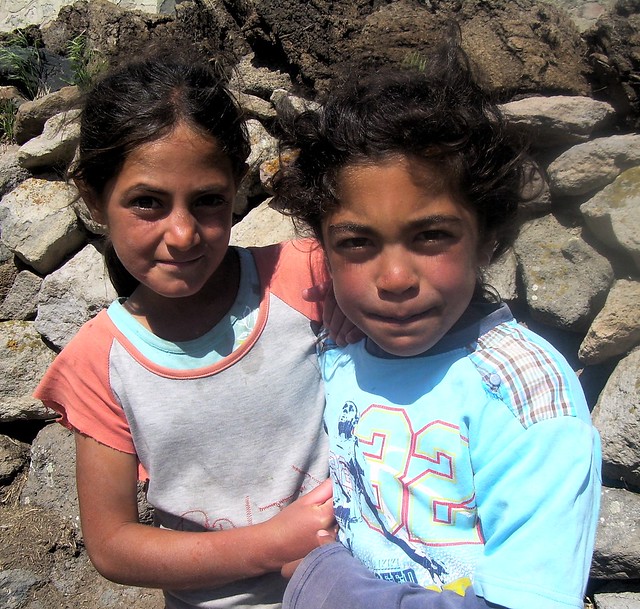 These somewhat out-of-the-way villages see few tourists.  People could hardly believe that we were there simply for tourism purposes.  Certainly we must have some old maps showing where the fleeing Armenians (at the time of the creation of the Turkish Republic?) buried their gold treasures?  In village after village people asked me this!  In Akçakale one man did show me a large, completely intact pot that he had found nearby and illegally collected.  He claimed it was Byzantine and that he could get US$10,000 for it.

There was old Armenian stuff just lying around.  Check out the carved crosses on these rocks that were haphazardly piled in a wall at our campsite at the site of an old Armenian church in Alaca: 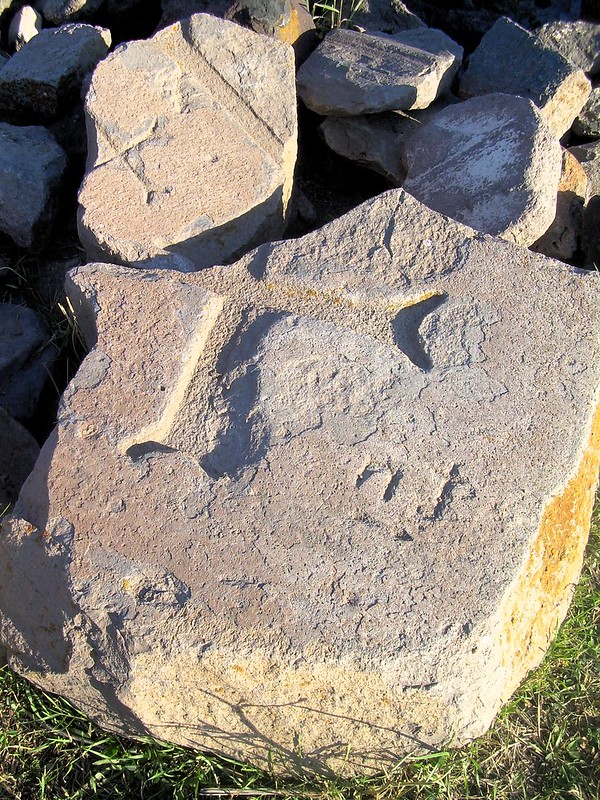 The riding was good, not great.  We had some hard climbs and deserted roads, a spectacularly steep descent and at times pleasant camping.  Bugs and heat were a persistent problem. 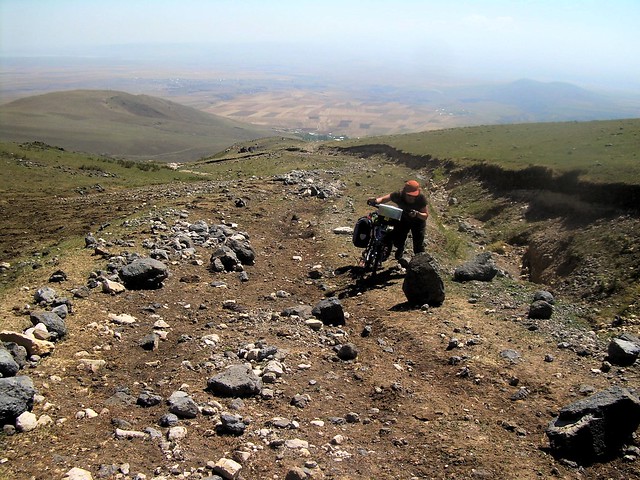 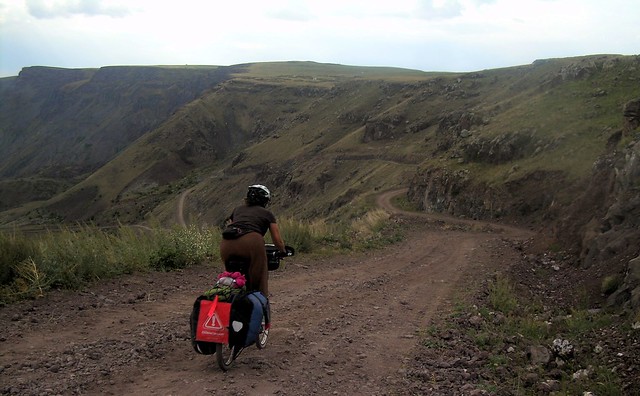 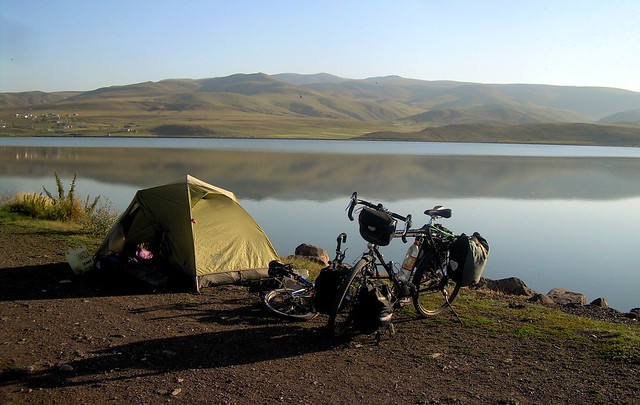 Doğubayazıt has been on travellers’ radar for years.  It was on the old overland hippie route to India, is now the main crossing from Turkey into Iran, and has always boasted Mt. Ararat (Ağrı Dağı) as its backdrop.  Trekkers take off from here to bag the summit.  The mountain was hidden in clouds for the three days we spent pedalling around its west side.  However, in the afternoon as we were turning our backs on the peak to head west from Doğubayazıt, the clouds cleared, and we got this hazy view: 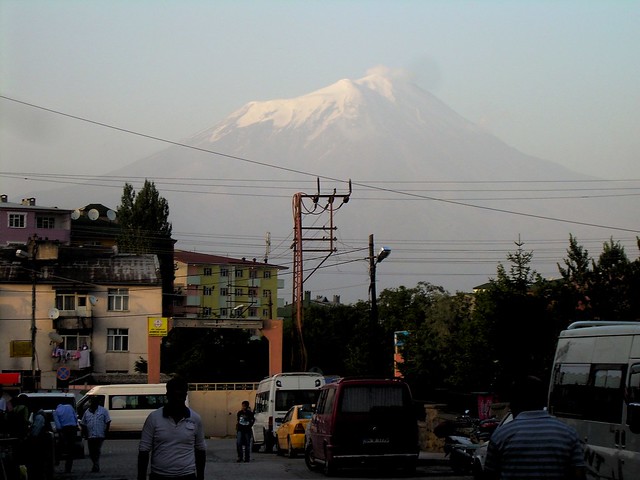 For me Doğubayazıt’s highlight was not Ararat but nearby İshak Paşa Sarayı, a hillside palace straight out of 1001 Arabian Nights.  I was also pleasantly surprised by the downtown shopping area, one of the nicest I’ve seen in Turkey. 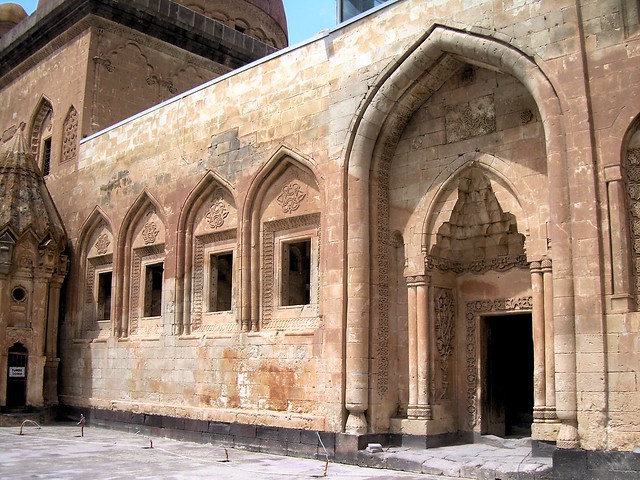 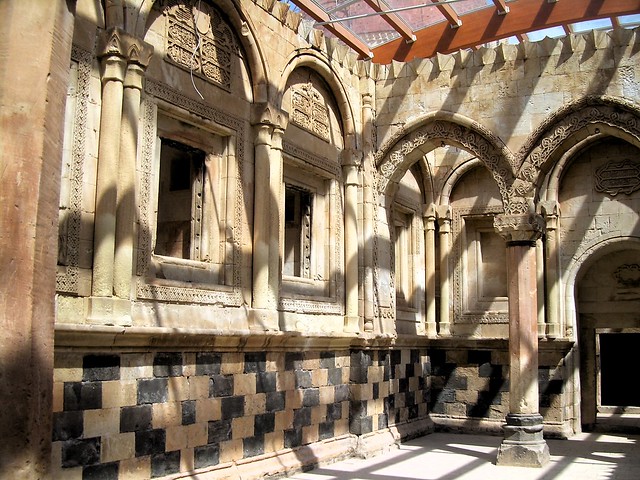 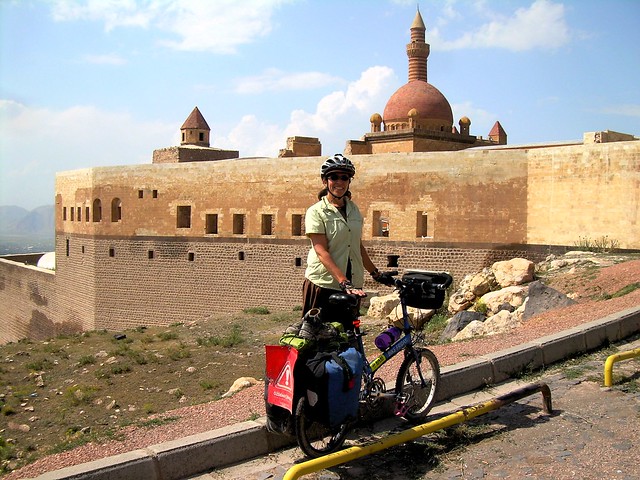 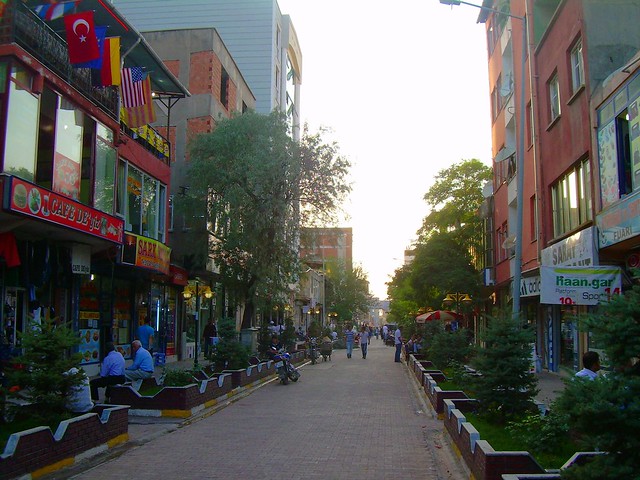 Just before Erzurum Sage and I were surprised to cycle above 2900m, my highest pass of the trip!  Now she’s is in the air — Erzurum-Istanbul-Munich-Boston-Houston-Seattle-Anchorage.  I’m on the ground, and the road rolls on. 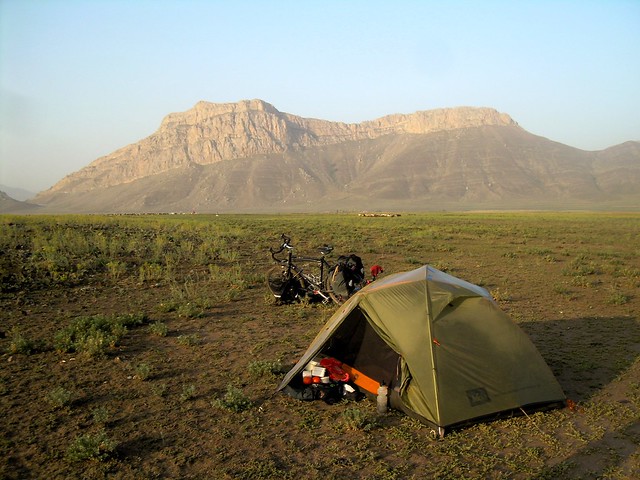 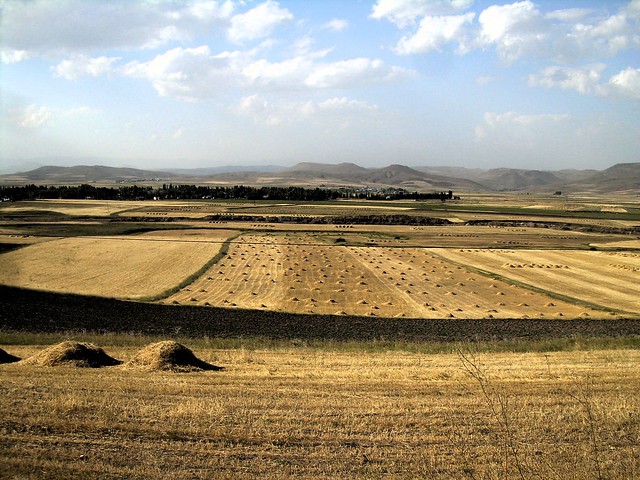 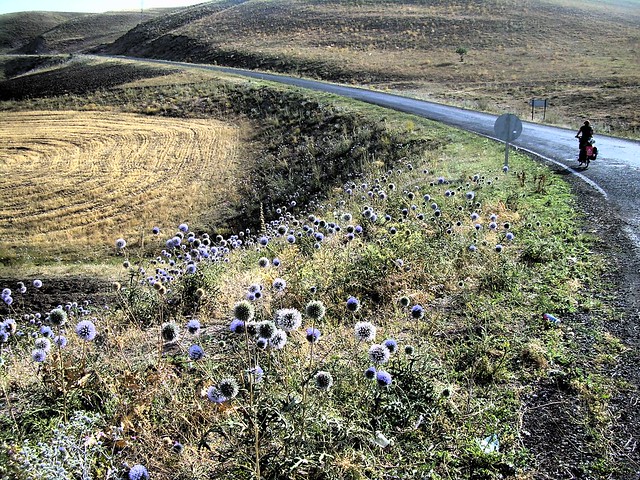 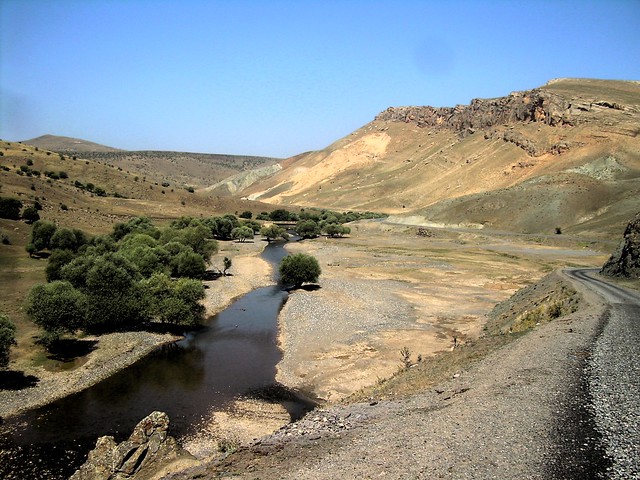 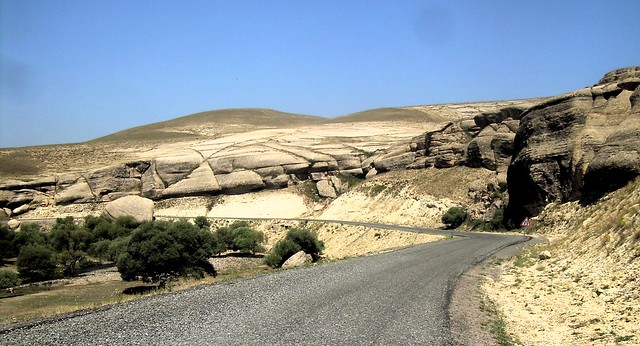 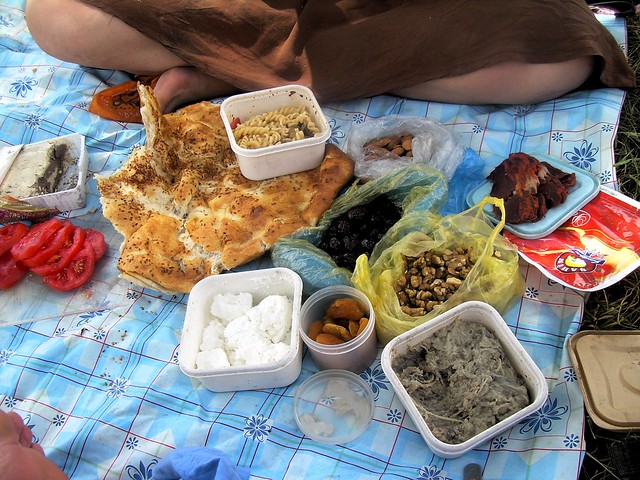 5 Responses to A small corner of Kurdish Turkey