Water, water everywhere.  Fully one-third of Mexico’s fresh water is in Tabasco.  With water come mosquitoes.  Heaps of them.  So bad that we huddled in the tents during the twilight hour when they were at their worst.  A couple nights we even resorted to eating a cold dinner in the tents to avoid getting out and cooking in the mosquitoes.  Breezes were welcome but rare. 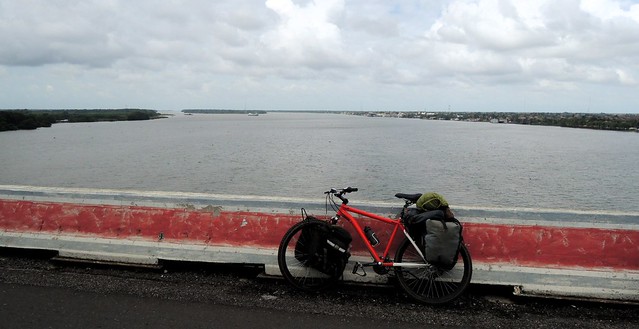 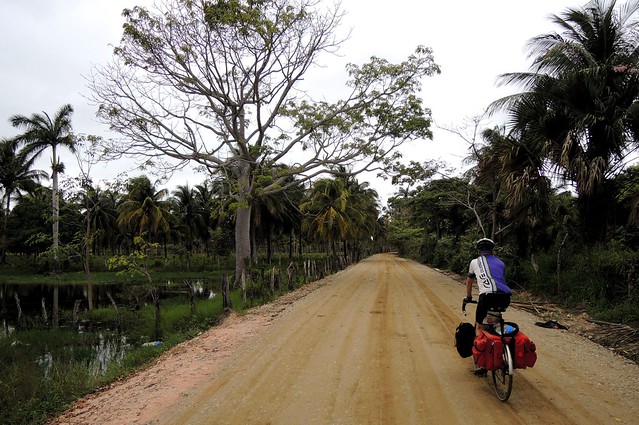 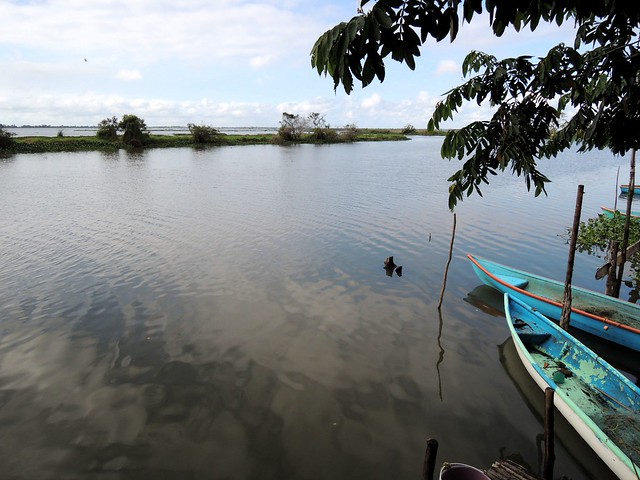 Actually Tabasco had a bit of everything — water, floods, and mosquitoes, alligators in the city, modern-looking Mayan ruins, and decapitations, kidnappings, and assaults at night.  In ten days only one person pulled a knife on us.  Don’t worry, we made it to Chiapas.  What I’ll remember most about Tabasco, however, is the wonderful hospitality from our couchsurfing hosts: Fabian in Villahermosa, Alex and his mother in Comalcalco, and Luís Alejandro and his family and friends in Huimanguillo.

But first the water.  In 2007 80% of Tabasco flooded. It seems like an incredible statistic… until you’ve been here in the dry season. “Dry” is certainly a relative word. In this dry season one cold front brought about 5cm of rain.  “Cold” is also a relative word.  The temperature at night, as reported in the paper: “plunged to 16°C.” 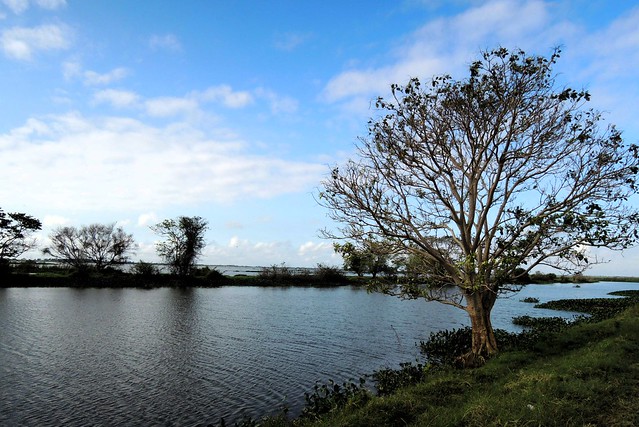 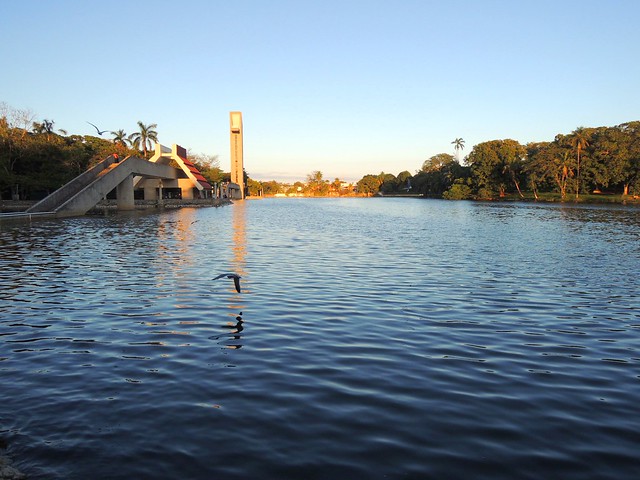 It is completely flat, and there is water everywhere.  I was amazed that so many trees can grow in standing water.  We cycled through long stretches of mangrove swamps but also fields with cows and grass, and yet everything’s under water.  A kayaker’s paradise perhaps. 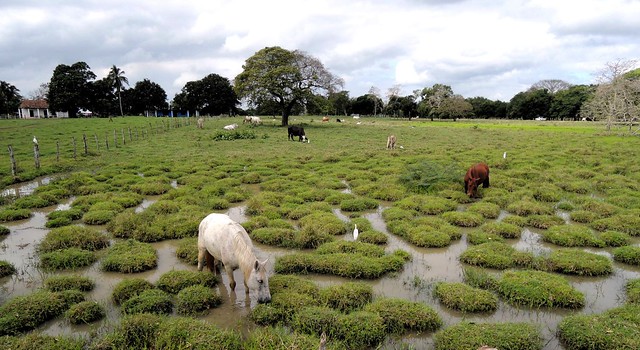 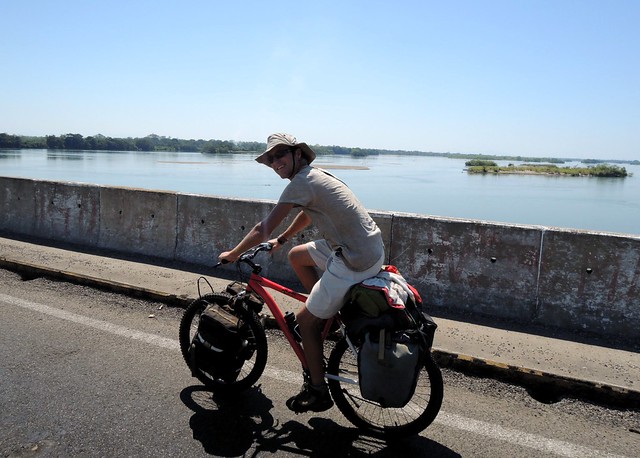 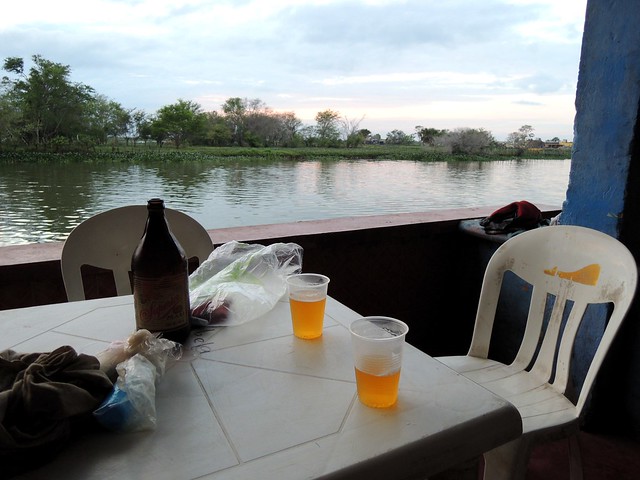 In fact during our short stay in Villahermosa Fabian took us out kayaking in La Laguna de Las Illusiones, the incredibly large, multi-fingered lake in the middle of Tabasco’s capital.  We saw iguanas on shore and got very close to large alligators in the water.  Jack once spent a whole week sea-kayaking in Florida and said he never got so close to alligators as we did right in the middle of an 800,000-person city! 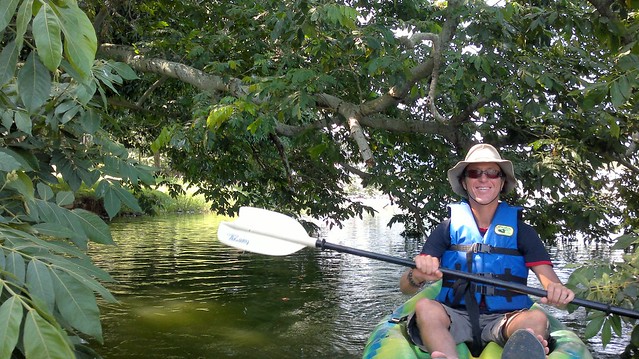 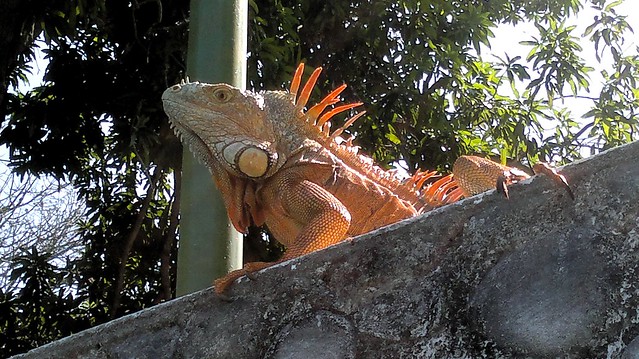 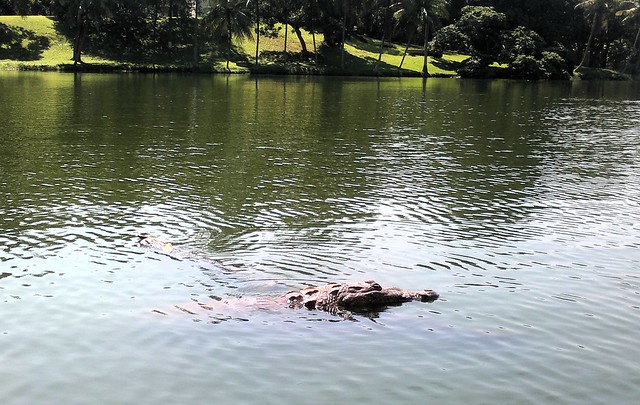 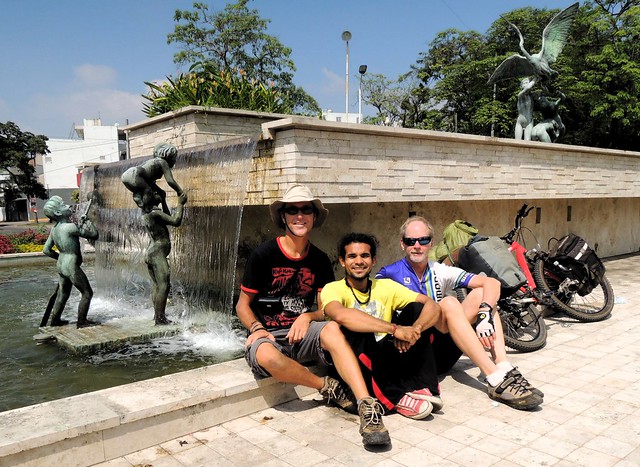 From Villahermosa we pedalled a couple short days to Comalcalco where Alex and his mother treated us like royalty.  Certainly they made sure we didn’t go hungry: Tabascan tamales (different in that they often mix something else into the masa (e.g. beans or chipilín, an herb)), cecina (thinly-sliced salted beef), ribs.  I’m starting to wonder if I’m doing enough cycling to deserve so much food!  Both Alex and his mother are keen travellers.  He’s off to China and SE Asia in April, and she’s trying to get in a trip to the Monarch Butterflies in Michoacán before they flutter off north shortly. 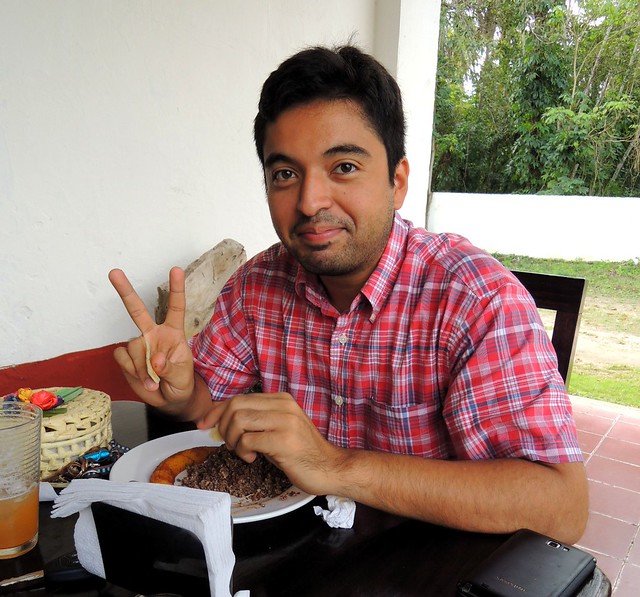 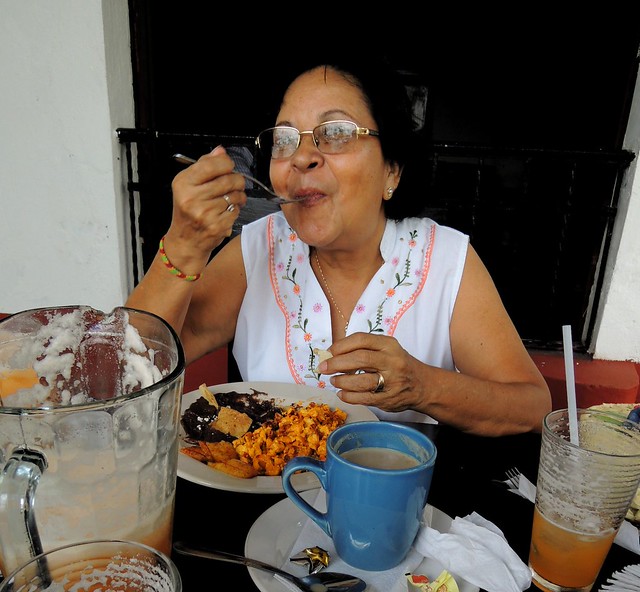 During our rest day we visited two of Comalcalco’s most famous sites, the eponymous Mayan city and a small-scale chocolate production factory, Hacienda Jesús María.  The Mayan ruins at Comalcalco are unusual in that they’re made of brick instead of stone.  Unlike in Yucatán and Guatemala there are no stones in Tabasco so the Mayans made bricks from clay to build their temples.  Since the bricks look quite similar to the ones we use today, the pyramids seem more like recent reconstructions.  At the chocolate hacienda I learned about cacao and cocoa and how they make white, dark, semisweet chocolate and everything in between. 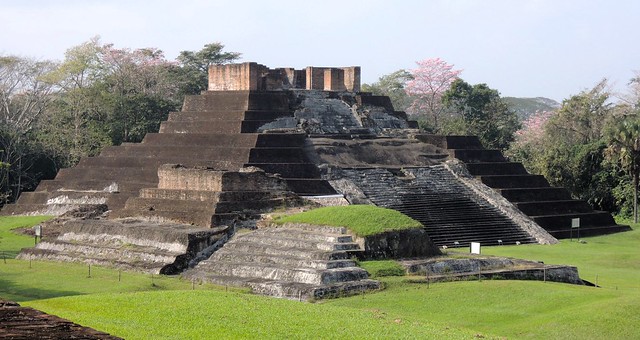 As varied as Tabasco is, the most variety we had in hospitality experiences was with Luis in Huimanguillo — a late night party at Wendy’s house, a fantastic bike tour with Joe, and conversations covering a wide range of topics — php, mysql, and web development with Luis, Mayan cosmology with Luis’ father, and linguistics with Andrés.  Andrés speaks excellent English and has studied Japanese.  We had fun comparing Japanese and Turkish which, until recently, linguists considered to be in the same language group.  Later I reflected on how over the course of our 1-2 hour conversation we switched seamlessly between English and Spanish.  It’s not obvious to me what triggered the changes in language.  Fun. 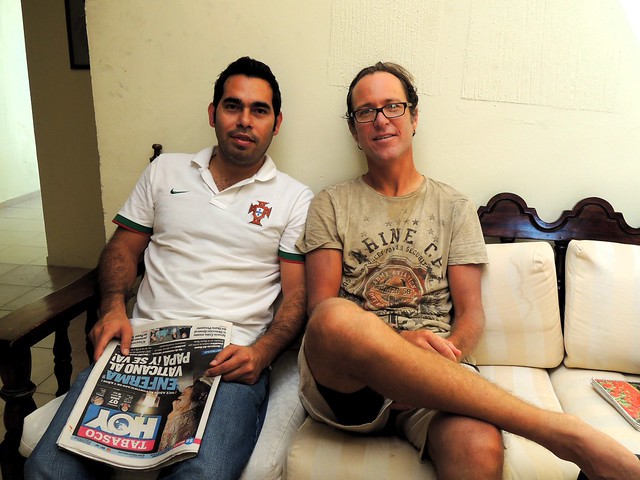 When Jack and I had left Comalcalco (yes, this narrative is going backward), Alex’s brother, Rodrigo, warned us about security concerns on the route we had chosen.  This was the first we had heard about the problems in the region around Cárdenas and didn’t take it too seriously.  On the road that day every single time Jack and I stopped people gave us similar warnings.  Like Rodrigo they recommended getting on the main highway instead of the back roads and to be especially careful at night.  Rodrigo had warned of drunks who get aggressive as the afternoon wears on.  It took our first such encounter (this was not the knife-threatening incident, btw; that was a number of days earlier at a cheap bar in Villahermosa) to get us to make a bee line for the national highway and a decision to spend the night in a hotel in Cárdenas.

When Jack and I arrived in Huimanguillo a day later, these security concerns were fresh on our minds.  We asked Luis’ father, Luis El Doctor, his opinion, and he told us, yes, there was daily violence in Cárdenas and its surroundings.  Surely, however, “daily” must be an exaggeration, we suspected.  However, as I read firsthand, violence was reported every day in the papers.  Beheadings seemed to be a favourite of the photographers (how do you photograph a kidnapping anyway?) and were often featured on a full page spread next to a barely-dressed woman with fake boobs.

In one of our conversations el doctor used a word that I learned in Medellín in the early 90s (when that city had one of the highest murder rates in the world) and have hardly heard or used since: sicario.  It means hired assassin or hit-man.  Hmm, vocabulary review in Tabasco?  On a brighter note (?), most people indicated that the violence was limited to those involved in the drug trade, but still, it wasn’t the kind of thing that gave you a warm, fuzzy feeling.

Our exit from Tabasco was stunning.  Luis introduced to his friend Joe, a fellow cyclist, kayaker, and adventurer.  He took us on a great route, across the huge river (500m wide) from Huimanguillo, across a smaller river marking the state border, and into the short, steep hills that are just a taste of what’s to come in Chiapas. 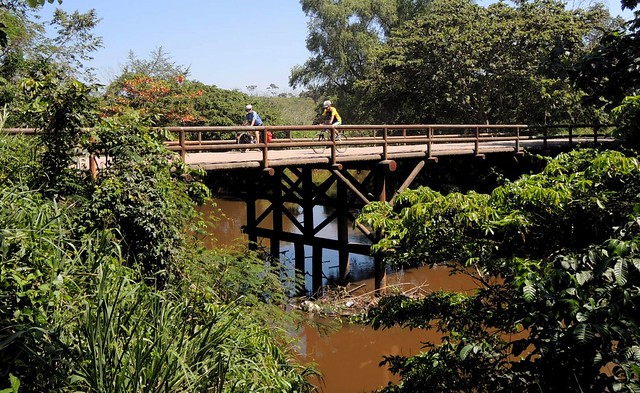 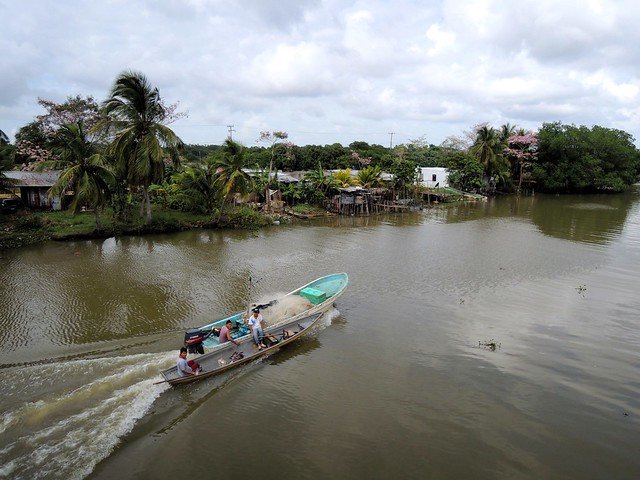 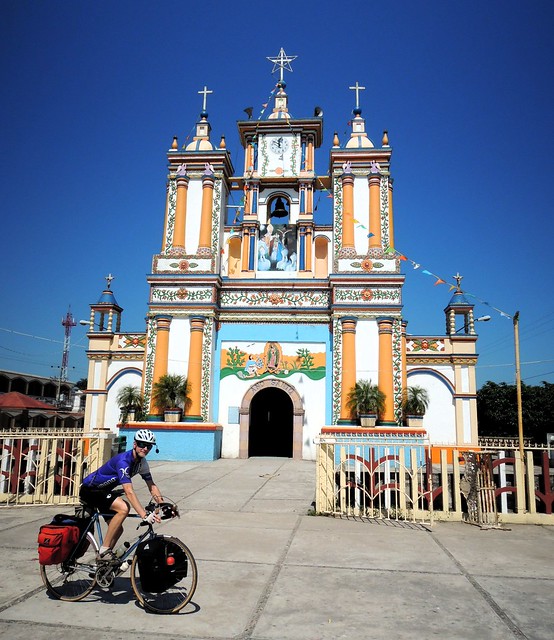 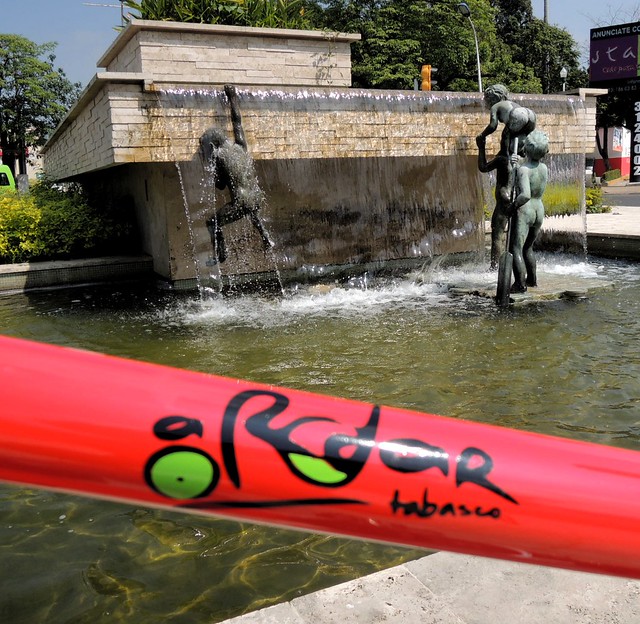 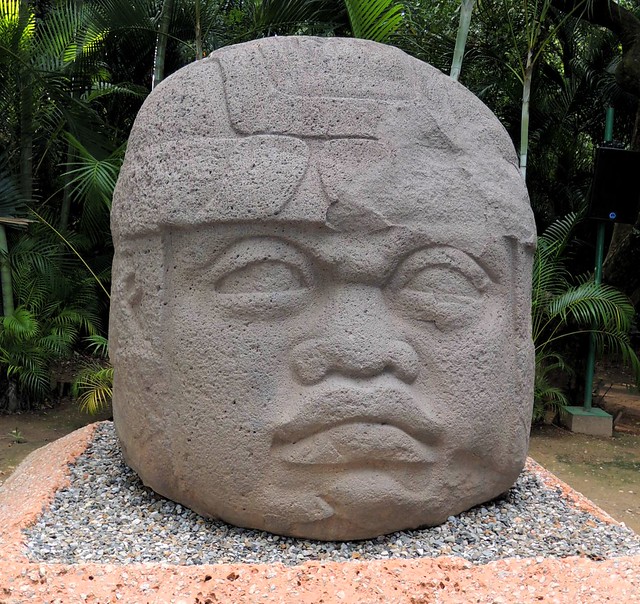