When Wendy came to Mexico, she brought an Outside magazine for me to take a look at.  Consisting mostly of automobile ads I definitely felt like I wasn’t their target audience.  However, after wading my way through the gear reviews I did manage to find a couple interesting paragraphs.  It was in their “best of” section.  You know: best lightweight headlamp that can signal help if you’re lost on the moon and best tire for your SUV to navigate the Walmart parking lot.  Indeed more wading and eventually I found: “best off-the-beaten-path destination”: Chiapas! 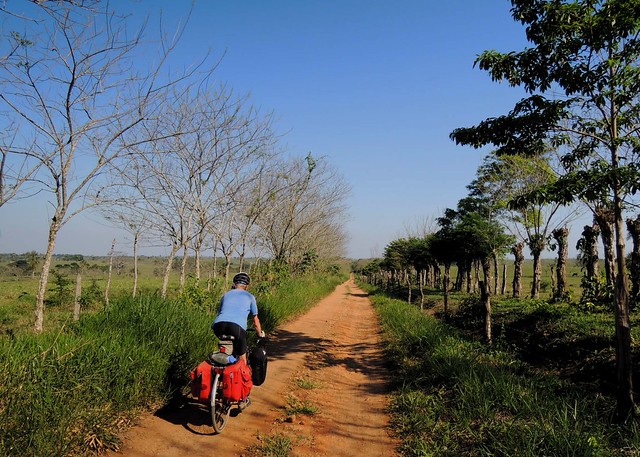 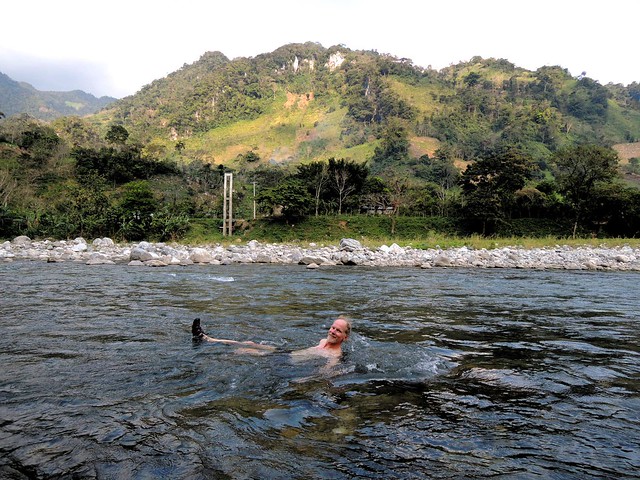 Runner-up, by the way, was Turkey’s Black Sea Mountains!  Oh yes, I’ll definitely have to get back there!  They warned, however, that you might want a guide as even in the hotels English isn’t spoken.

Wait, back to Chiapas. 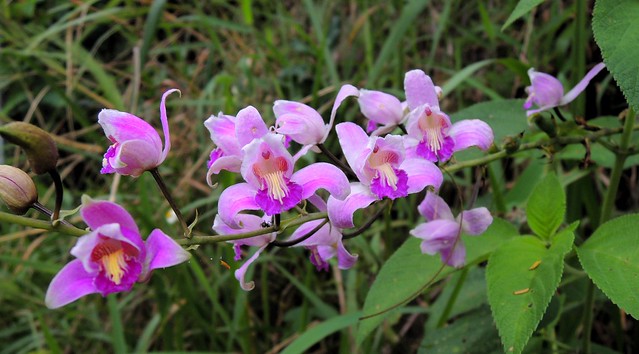 Joe from Huimanguillo guided us out of Tabasco and onto a hilly dirt road for the start of our tour through Chiapas.  After a pancake-flat four weeks in Yucatán, Campeche, and Tabasco, we knew to expect hills in Chiapas.  One of the reasons that Jack and I chose to cycle from Mérida to San Cristóbal de Las Casas was because of the tremendous diversity of this route in a fairly short distance.  There’s a variety of people and food, but it was the change from easy flat riding to tough hill climbs that we noticed first in Chiapas.  We started with steep, short hills, and we ended up with long, steep mountains.  The day before we finished our tour, from Mitontic we pedalled up an unexpected 1000m climb, topping out at about 2700m.  Yep, these are real mountains.  The cool pine forests seemed a long ways from the steamy jungle just down the road. 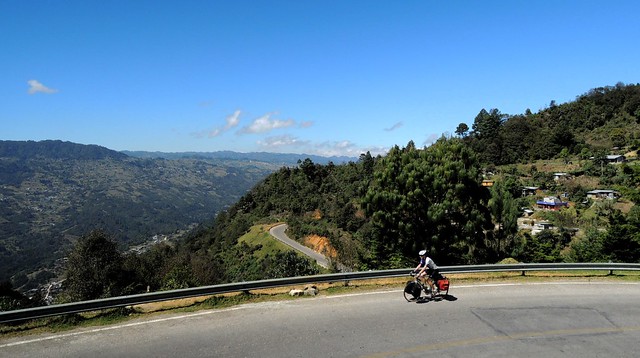 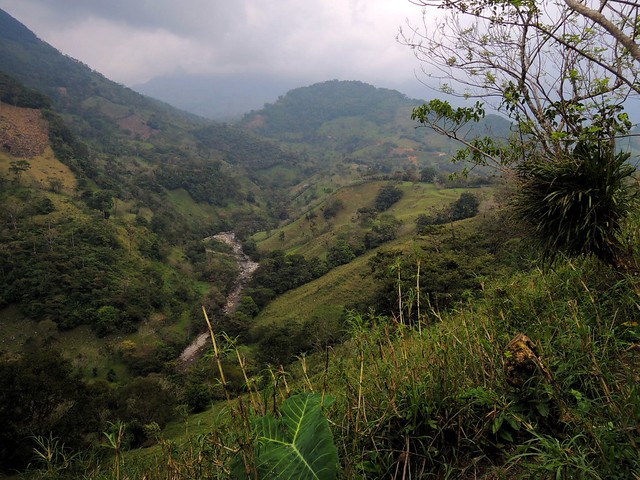 Chiapas has a few large indigenous groups, but in the area where we rode it was all Tzotzil.  Like in Yucatán these are descendants of the Maya.  The Tzotzil Mayan language is, however, a distinct language from the Yucatec Mayan.  They aren’t mutually intelligible according to the few people I asked.

The Tzotziles aren’t keen on outsiders, and that probably made for the difficult part of travelling in Chiapas.  People usually answered our questions (albeit minimally), perhaps a couple times I was ignored, but except for the drunks no one approached us to find out what we were up to.  It wasn’t the friendly warm welcome like in so many other parts of Mexico.

In Las Ollas we asked a Tzotzil man who had worked in the US if we could camp in his yard.  Although he didn’t say no, he seemed quite reluctant to say yes.  We pushed on.  In another spot off a dirt road with very little traffic I asked a passing pickup driver about camping there.  He didn’t say yes, but his only warning was about the cold night.  We camped there without incident and surprised some women who walked by in the morning taking their kids to school.

One of the best and most comfortable conversations was with a family of coffee growers on the outskirts of San Cayetano.  Although they said “tons” when I asked them how many beans they harvested annually, this was truly small-scale family coffee growing.  This family grew nothing else, using money from the coffee to buy even staples like corn.  In front of their house they had a shaded area where they started new plants and kept them about three years before transferring them to the shaded hillside fields.  The family dries the beans and removes the husks (or shell or whatever it is) with a gasoline-powered machine that’s not much bigger than a blender.  They then sell the beans, and they’re further processed (roasted, ground) at a factory in Tuxtla Gutiérrez.  This whole coffee growing region seemed quite small.  Even in the next valley over at what seemed to be the same aspect and elevation, they weren’t growing coffee. 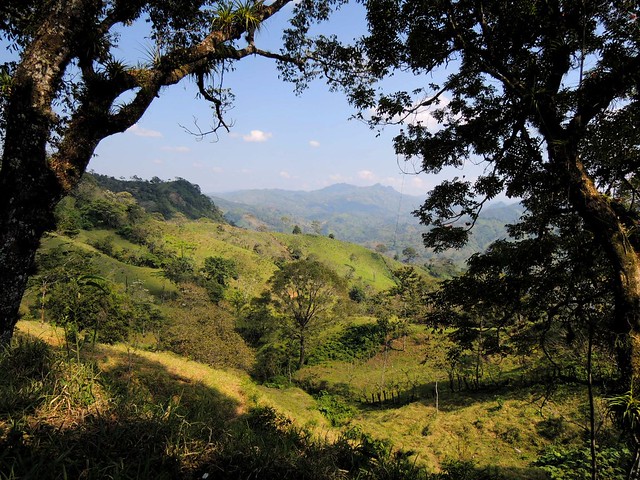 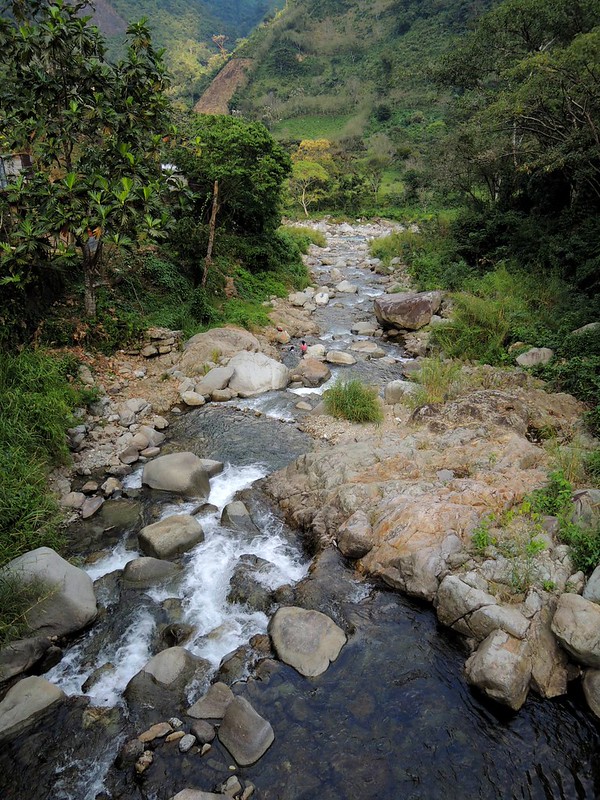 Twice we decided to stay in hotels because of safety concerns being out at night in remote areas, once in Cárdenas, once in Pichucalco.  Both times we happened upon carnival celebrations that of course we would have missed had we been ensconced in our tents in the forest.  Cárdenas had a small parade with music, fairly typical stuff.  Pichucalco, however, had an unusual Fat Tuesday celebration.  About ten people dressed entirely in black with tall black conical hats paraded through town.  The costumes looked like KKK costumes that I’ve seen in movies, only these were black instead of white.  Some individuals carried torches while a small group carried a large wooden box that looked like it could be a coffin.  Instead it was full of explosives — firecrackers and some fireworks.  A bit later, while Jack and I were sitting at the side of the main square eating tacos (yes, always eating, it seems), this box was ignited in front of the church.  Boom, boom, boom.  Noise, fire, lights, flames and burning material flying through the air in all directions.  It was a great example of typical Mexican disorganization with no apparent concern for public safety, yet no one was hurt. 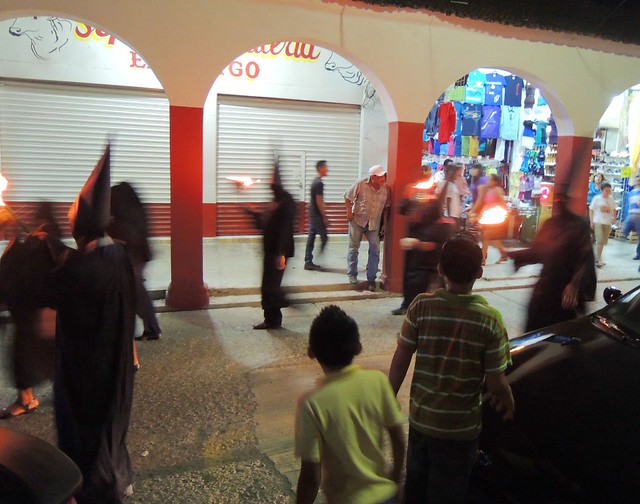 They didn’t have torritos, but their explosion seemed every bit as dangerous.  If you’ve never seen a torrito, that’s something to experience.  These are the men laden with fireworks, sparks flying in every direction as they run through crowds during festivals.  Also, isn’t it somewhere in Mexico where they have a running of the bulls like in Pamplona, the difference being that in Mexico the bulls run in both directions??!!  Yes, I’ll miss this place.

Like Outside Magazine said, Chiapas did seem like an off-the-beaten-track tourist destination until we got to San Cristóbal de Las Casas.  It’s a high hippy hangout filled with colonial churches and surrounded by mountains.  Travellers are attracted by the colonial center, colorful outfits, cheap prices, and year-round pleasant weather.  Shoeless hippies toting credit cards walk down trendy pedestrian streets next to Mexican tourists and natives hawking colorful artesanías.  There’s plenty of people watching to be done in San Cristóbal. 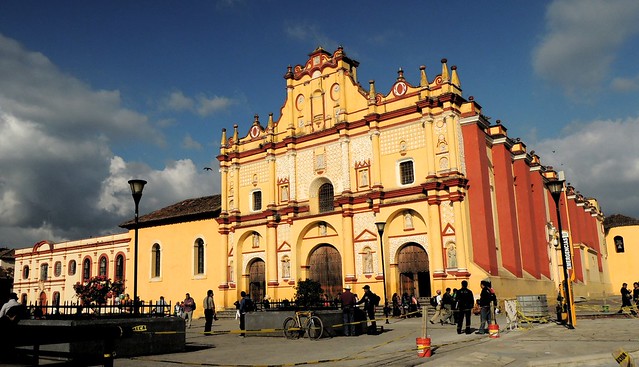 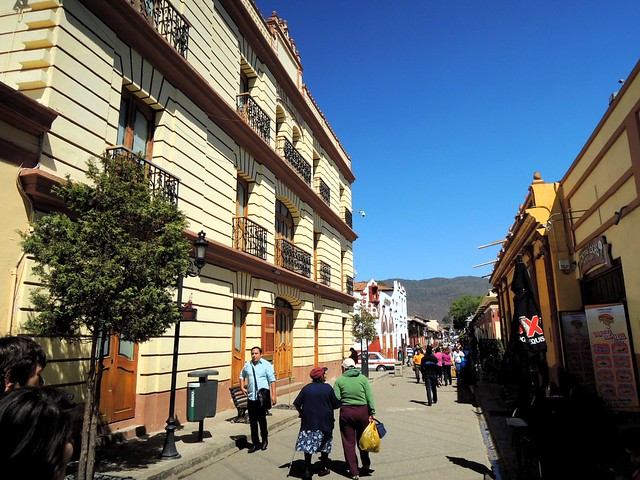 Jack and I took a day trip on the bikes to the nearby villages of San Juan Chamula and Zinacantán.  The highlight was the ordinary-looking (from the outside) church in San Juan Chamula.  Inside was empty of chairs or any place to sit (except the floor).  There were a few tables absolutely stuffed full of burning candles.  The floor was covered with long green pine needles.  Worshippers cleared away the needles from a small area to perform their ceremonies which consisted of burning lots of candles, chanting, and drinking some soft drinks.  A day or two later at a museum of traditional Mayan medicine, I read a list of the exact number, size, and color of candles that you need to cure a whole host of diseases and even other wishes like promoting harmony within your family or ensuring a good harvest. 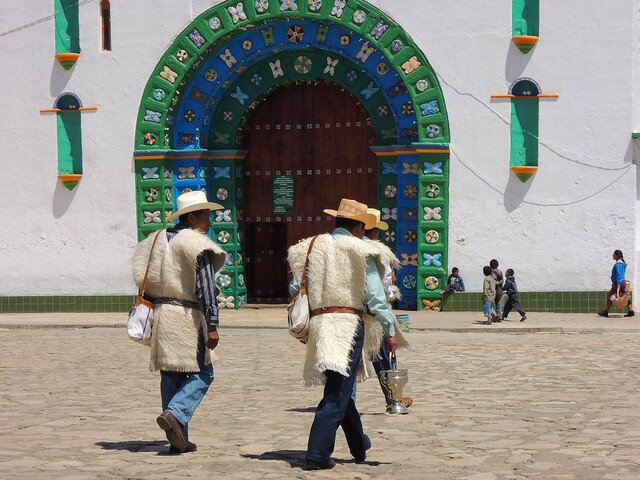 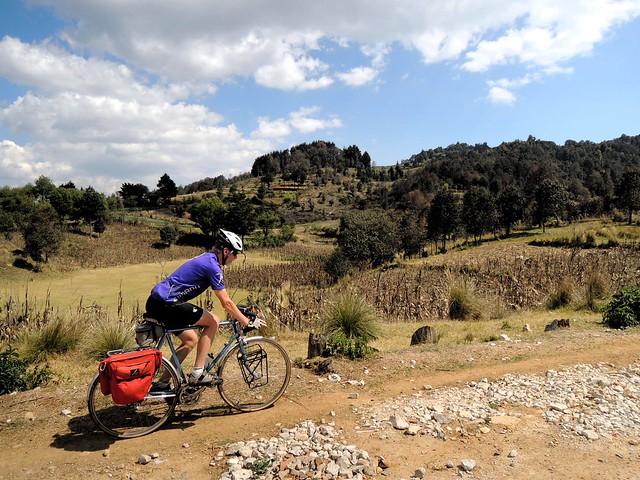 Jack and I finished our tour together in San Cristóbal de Las Casas.  From there he took a bus back to Mérida and is back in Colorado by now.  We picked a restaurant with a mariachi band for our celebratory lunch.  It turned out to be Jorge’s birthday.  When I went over to wish him a happy birthday, he ended up buying each of us a tequila.  When we went to say goodbye at the end of our meal, it was two more tequilas each.  By this time he had had lots of tequilas and kept repeating how great it was that people like us come to visit his city.  Thanks, Jorge!

P.S. How often do you get to eat fried pig skin and pickled pig skin in the same meal? 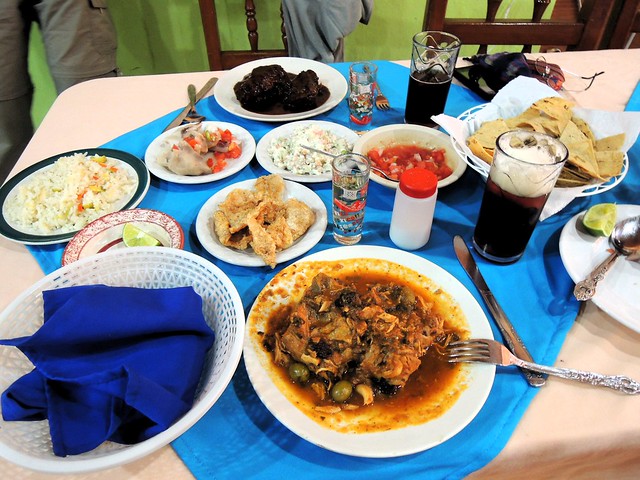 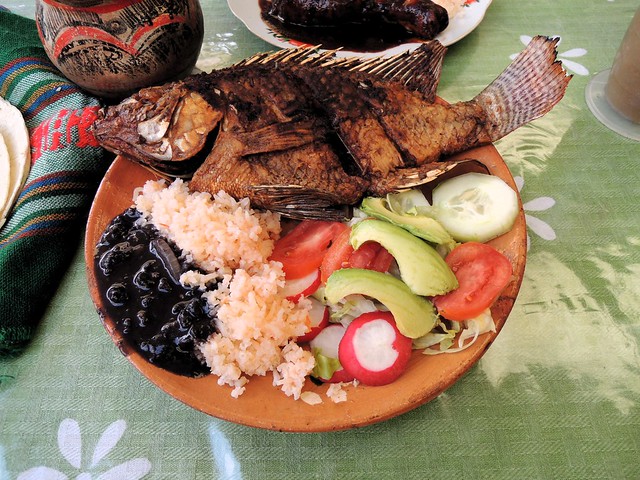 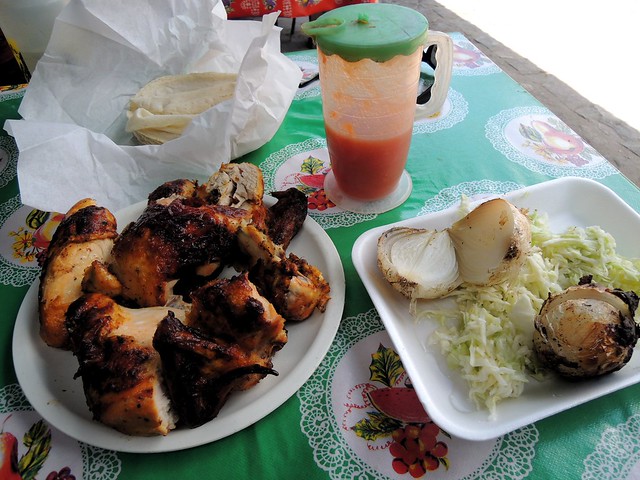 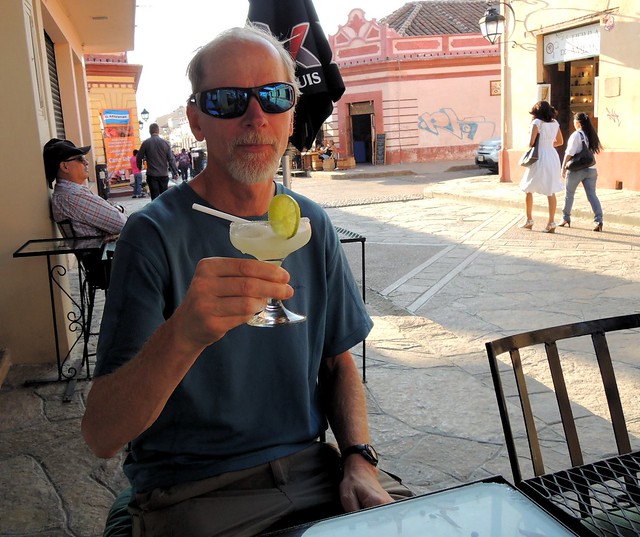 1 Response to Rambling through Tzotzil Chiapas