The flight to Tel Aviv wasn’t long, but then I was delayed for three hours in immigration.  I’m not sure what answers I gave that aroused so much suspicion.  Delays at immigration are, sadly, not uncommon.  In the holding area I talked to two people who had been detained longer than I was.  There was also a young couple from Singapore, like me living in Turkey.  Perhaps that was the problem.

Finally through immigration I quickly found the shuttles to Jerusalem — 64 NIS/person plus an extra seemingly arbitrary 25 NIS for the bike, easily accommodated in the normal luggage space.  Welcome to Israel.

Thankfully Shimshon’s welcome was much more friendly.  He was at Kikar Tzion as planned and quickly got me something to eat since I was famished.  I don’t know Shimshon well.  We met at a “tree-hugging event” (his words) shortly before I left Colorado three years ago.  He suggested we do some cycling together in Israel.  Ok. 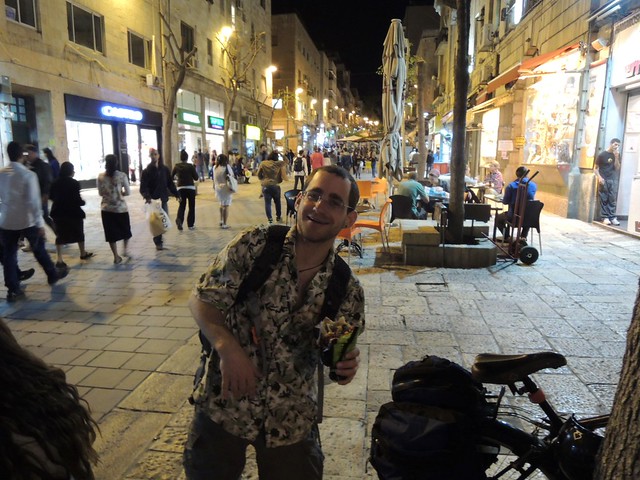 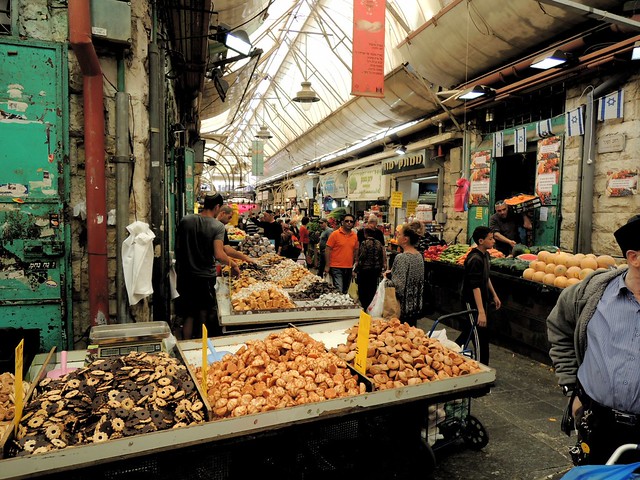 After building my bike, we cycled a short distance to his parents’ house.  I met his mother that night, and she explained her kosher kitchen to me.  Utensils, dishes, pots, anything that’s in contact with meat must be kept separate from anything that’s in contact with dairy.  There are even separate sinks and dishwashers for the meat and dairy dishes.  Seems to me it could just be easier to be a vegetarian and be done with it.

I had a couple days in Jerusalem before Shimshon and I left on our bicycles.  There’s a whole spectrum of religious nuts/wackos/fanatics/believers.  I met a guy who found the Arc of the Covenant; I saw of bunch of bearded Jews with black hats and long ponytail things by their ears praying in front of Judaism’s most sacred site, a stone wall; on Saturday for the Christians god sent a flame down from the heavens; at the entrance to a mosque a Muslim accused my Jewish tour guide of lying; and later a Jewish guy ranted that the guide’s info was just “his story, his story, his story.”  History mixed with religion — no matter how you tell it I’m sure you can’t win. 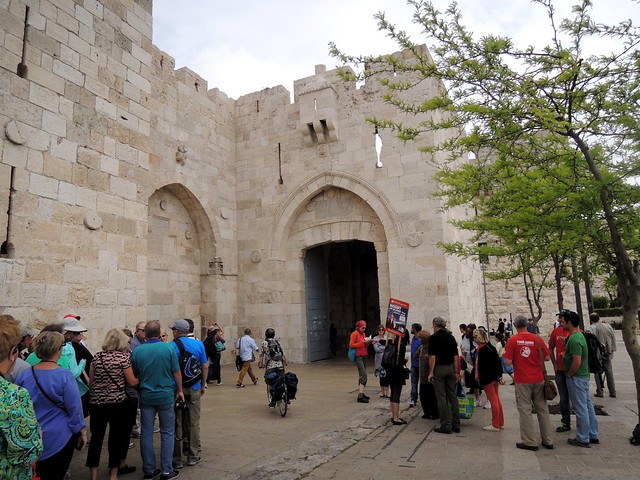 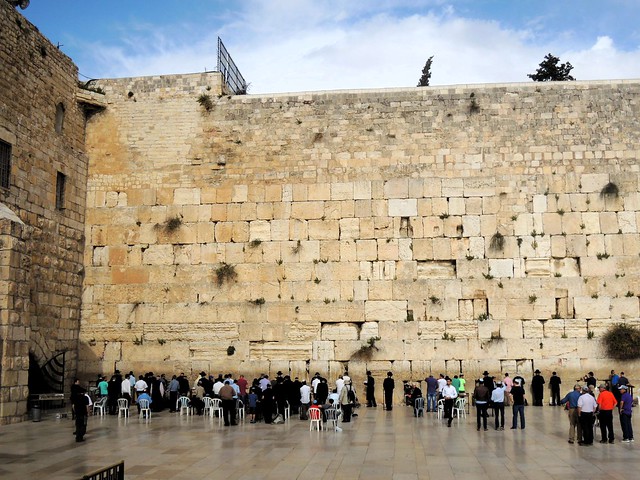 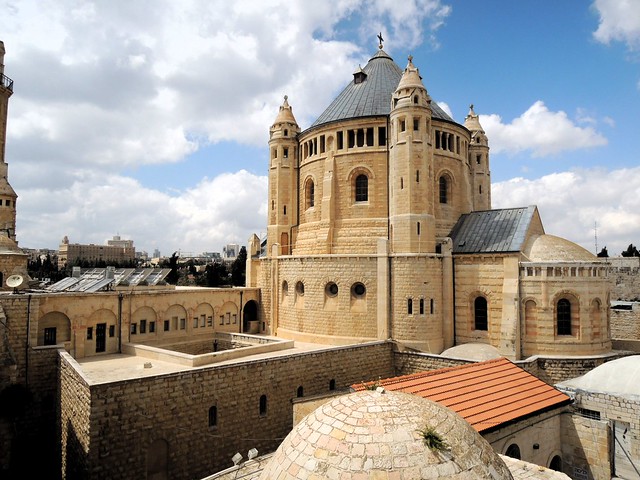 Walking around the Muslim Quarter of the Old City with Shimshon, he noticed a tension that I didn’t pick up on.  I felt like I was in the tourist bazaar in Antalya.  However, one evening after watching the sunset from Mount of Olives (where there’s a huge Jewish cemetery because the folks here will be the first to be resurrected…), I rode into East Jerusalem listening to the call to prayer from the mosques.  I stopped to look around, and a kid ran into my bicycle.  His older brother threateningly said to me in English, “well, at least you can apologize.”  What?  Because your brother wasn’t watching where he was going and ran into me while I was standing here?  I apologized and certainly felt the tension. 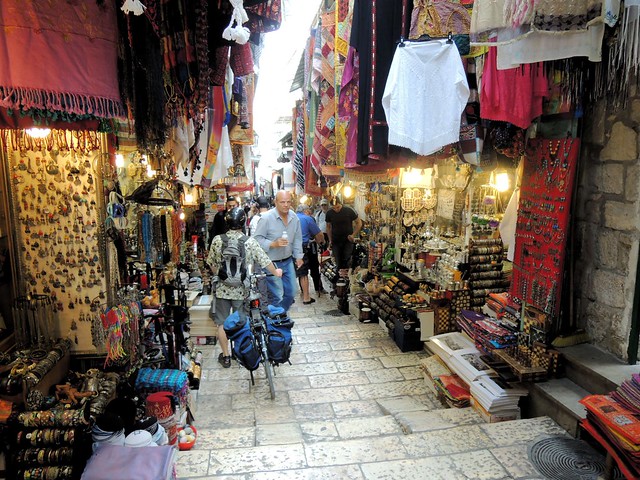 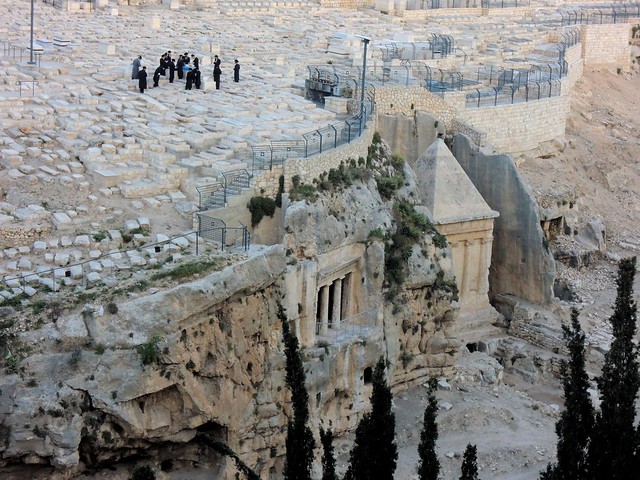 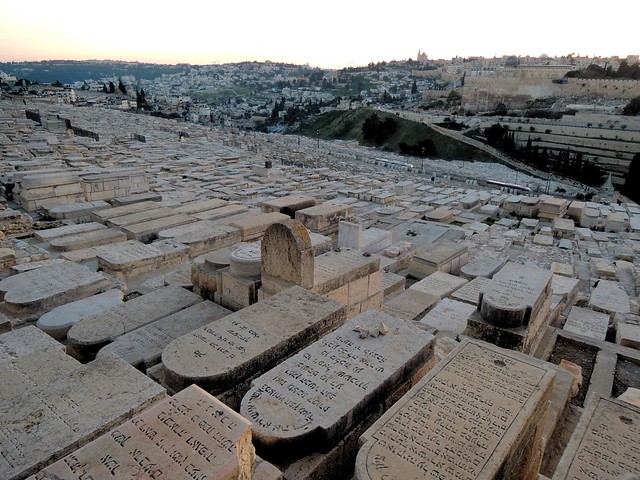 Jerusalem at about 800m (amsl) is not far from the Dead Sea at -400m.  If you stick to the main roads you don’t have to pedal much, but of course I found dirt tracks with plenty of up and down!  We got a late start and found a pleasant camping spot in the desert along the way.  I was rather excited to see camels (not realizing how common this would be) and the following day had the obligatory float in the super salty sea.  It’s like I could walk on water. 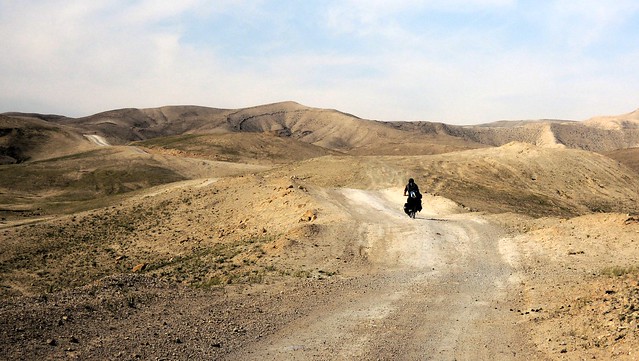 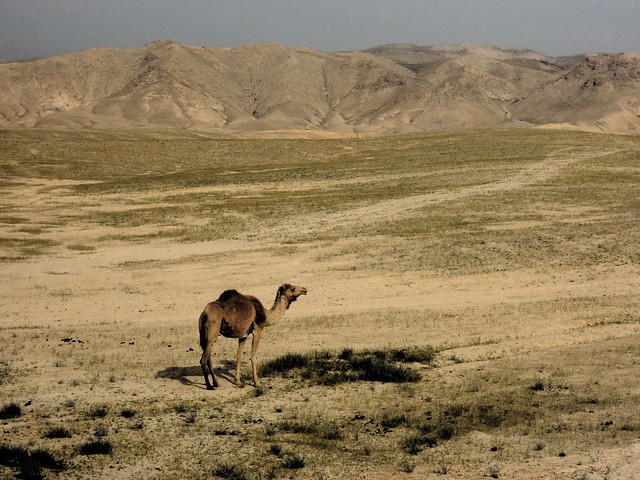 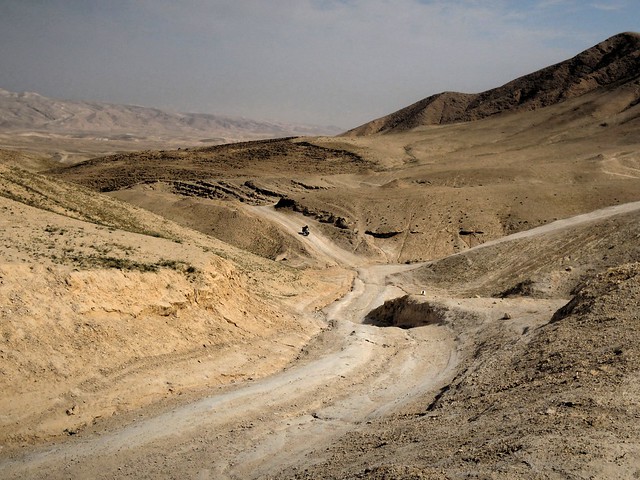 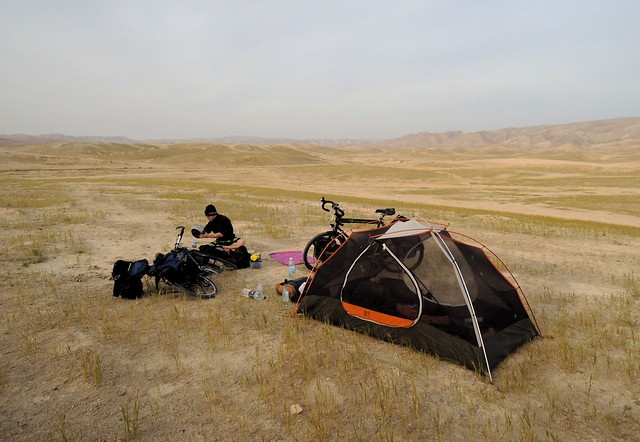 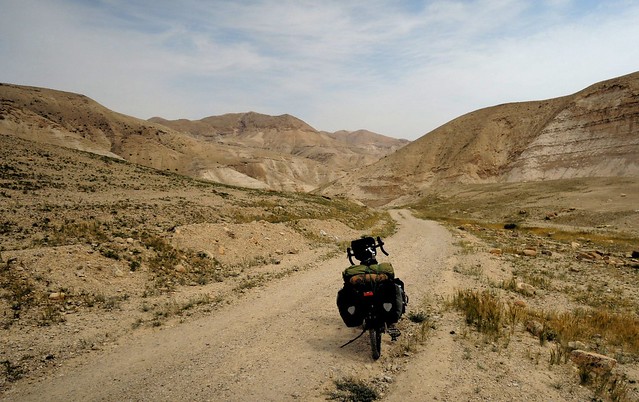 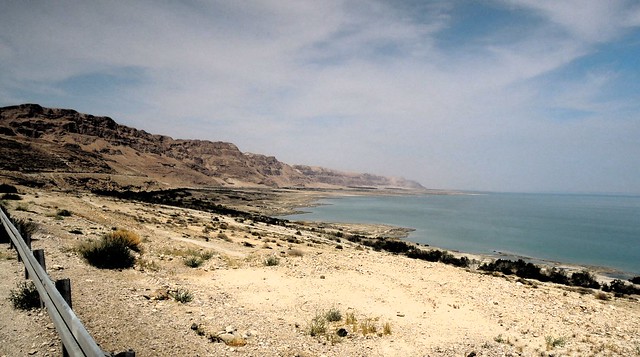 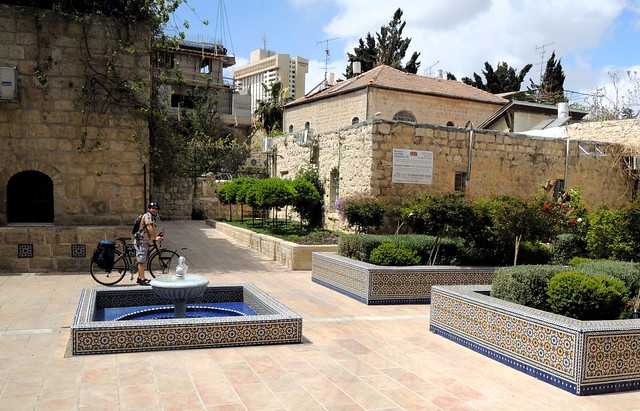 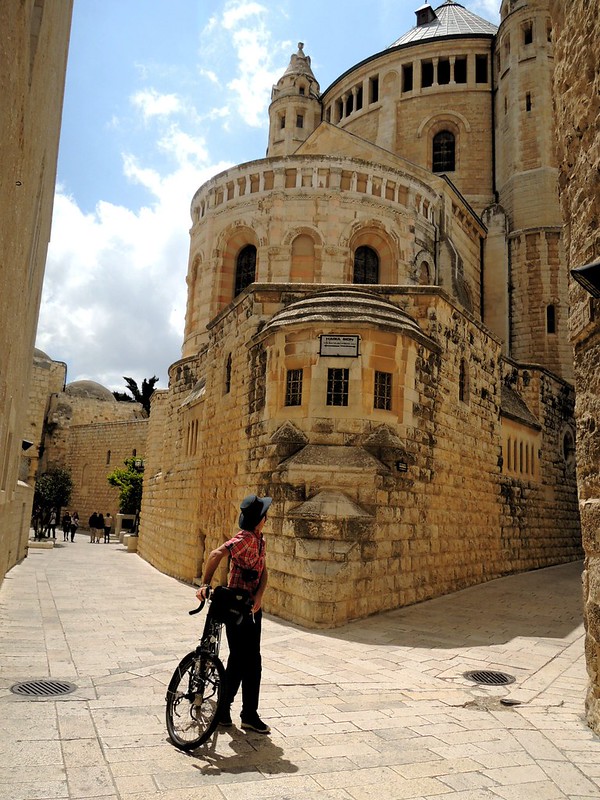 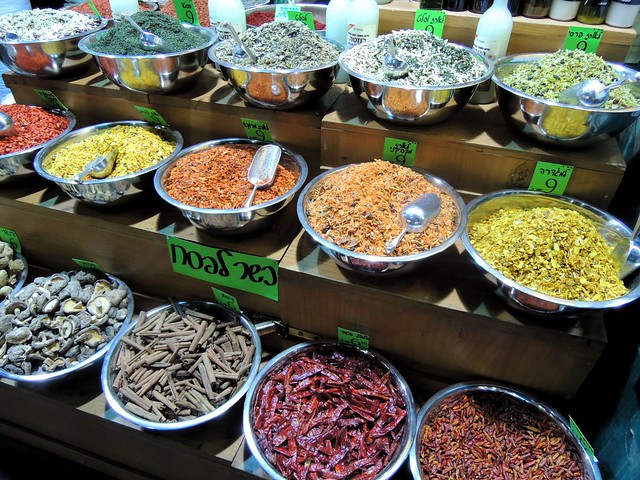 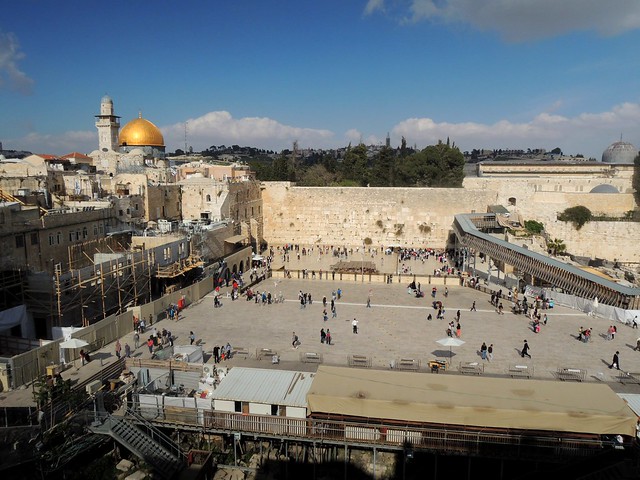