An overnight trip to Ovacık Dağı

Last December I signed up for a weekend trip to climb Ovacık Dağı with TODOSK.  I was hoping to use crampons and an ice axe so I was a little bummed to learn that at that point it had hardly snowed up there.  Last winter Turkey received much less snow than normal.  In the end the trip was postponed, and when TODOSK finally did climb the peak in May, I had other plans that weekend (cruising around Antalya on a tandem bicycle!).

Two and a half weeks later Cemalettin, Nazif, and I set off to climb Ovacık on our own.  We set our tents up at a low yayla below the west flank of the peak, a bit passed Etler Köyü (Serik).  The normal thing to do is to take a good trail to a higher yayla and climb the peak from the NW.  Instead we talked to a couple locals who recommended we go straight up the steep west face.  Once you get to the ridge they explained, it’s a straight shot to the summit. 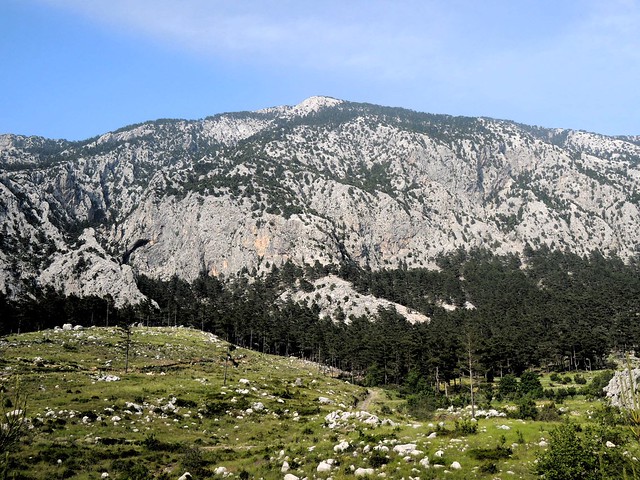 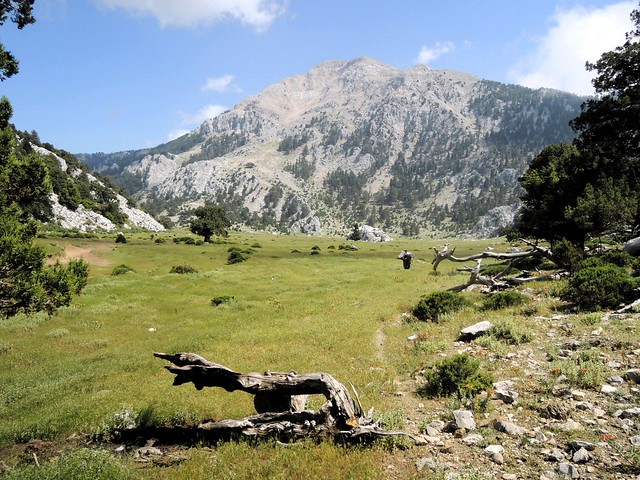 Well, sure, everything they said was probably true, except maybe that the young guy could get from where we were camped to the summit in 45 minutes.  Given the 1200m elevation difference, I find that hard to believe.  However, on the steep west face we made a couple wrong choices and ended up getting cliffed out.  One time we turned back and chose another route.  Another time we persevered and by attaching two poles together were able to hand our packs over a vertical section so we could do the climbing unencumbered.  Nazif, being the least experienced in the group, managed this well, but his energy was sapped, and he didn’t get to the summit.

None of us were very keen on descending our steep ascent up the west face.  We managed to find a route down the NW side of the mountain, but I was surprised we didn’t come across a good trail until just before arriving at the yayla.  Ocavık is a massive mountain, but I guess it doesn’t get climbed so often.  It’s low (just over 2000m), is mostly tree-covered, and doesn’t have great summit views which is a bit surprising considering that it’s visible for quite some distance in every direction.  The interesting trees might have been the highlight of the hike. 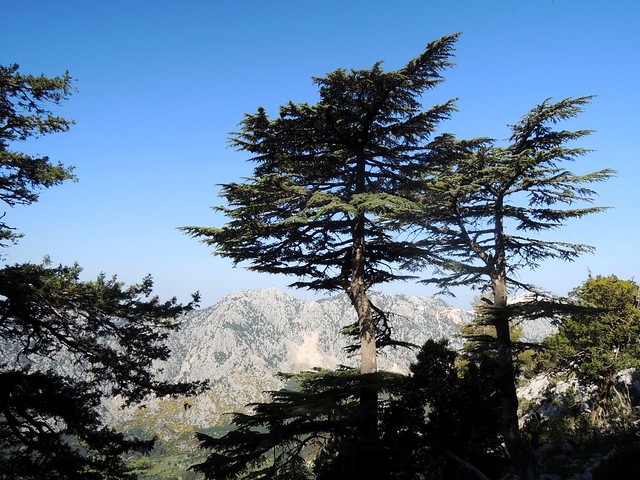 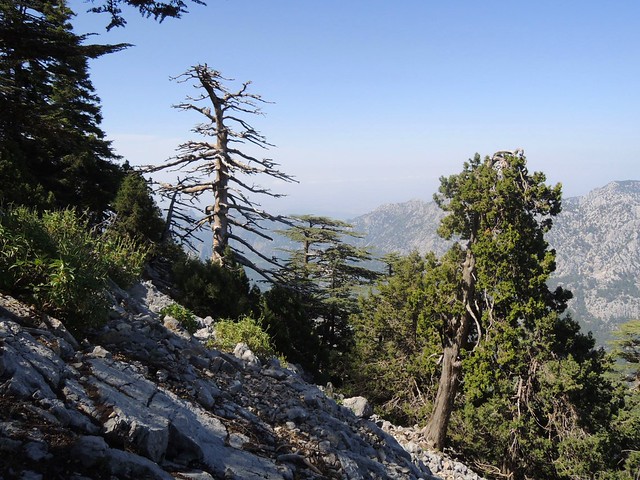 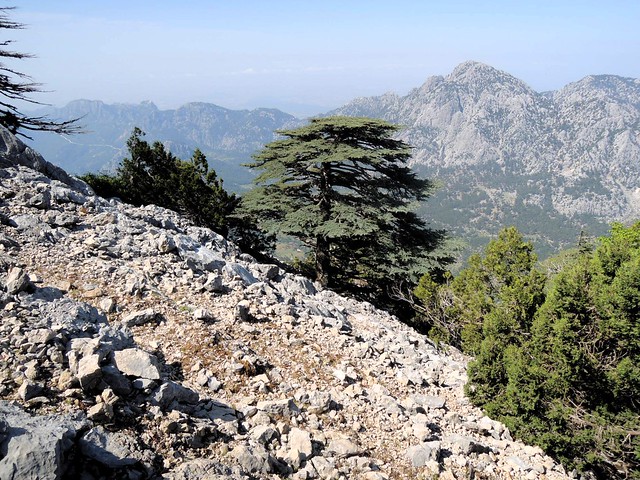 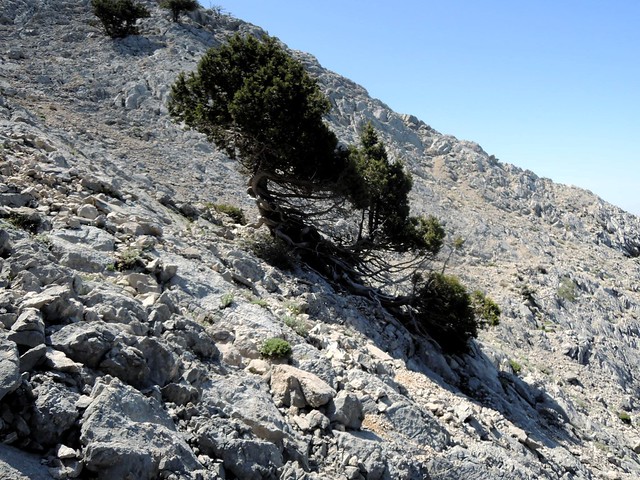 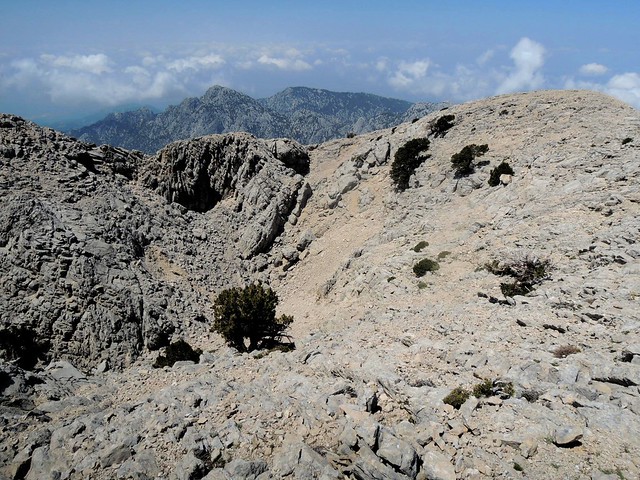 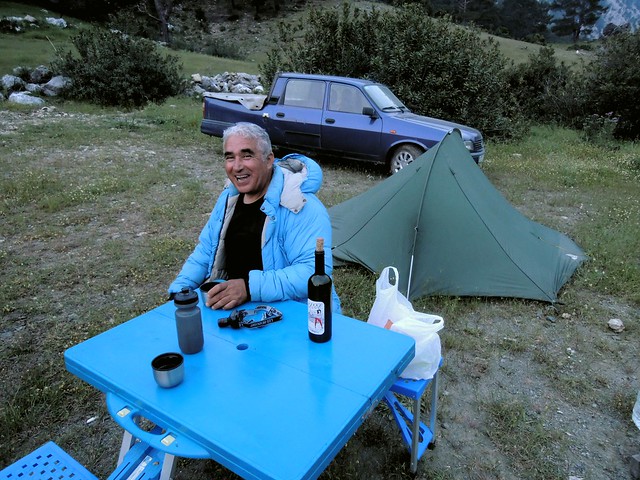 This entry was posted in Trekking, Turkey and tagged Etler, Ovacık Dağı. Bookmark the permalink.