Mexico City is my favourite big city.  I always enjoy visiting and staying with Isaac.  Why is Mexico City my favourite?  I started thinking the reason was that I really hadn’t been to that many big cities, but that’s not so true — Tokyo, Jakarta, Delhi, Guangzhou, Shenzhen, Mumbai, Wuhan, Kolkata, Istanbul, London, Los Angeles, Xi’an, Paris, Rio de Janeiro…  According to Wikipedia, I’ve been to over a third of the cities with over 10,000,000 inhabitants.  So what’s so great about Mexico City?  Partly, along with Los Angeles and Istanbul, it’s one of the big cities that I know the best, and partly it’s because Mexico City is just a whole bunch of different towns, neighbourhoods, villages in one urban mess.  San Juan de Aragón where Isaac lives, Tlatelolco, Centro Histórico, Tepito, La Basílica, Coyoacán, Ciudad Universitaria, Xochimilco — they’re all so different from each other and interesting in their own right.  I was hoping Ferda would like it.

We spent the first day visiting some of the highlights in the center with Isaac.  Ferda really wanted to see Frida Kahlo’s house in Coyoacán so we headed out there another day.  However, this was the week between Christmas and New Year, and the line to get in was incredible.  It looked like the wait could be hours, and that’s not how we wanted to spend our afternoon.  I had hoped we’d have a chance to get back there when we came through Mexico City again at the end of our trip, but it didn’t happen.  Because of the way the tickets work (and the long distance from San Juan de Aragón), it makes sense to visit Anahuacalli and Frida Kahlo museums on the same day.  Because of museum closures and weekend crowds, that has to be Wednesday, Thursday, or Friday.   We didn’t make it, but now we have an excuse to go back.  Isaac thinks it’s amusing that Frida Kahlo has a worldwide cult following, but many of these followers don’t even know who Diego Rivera is! 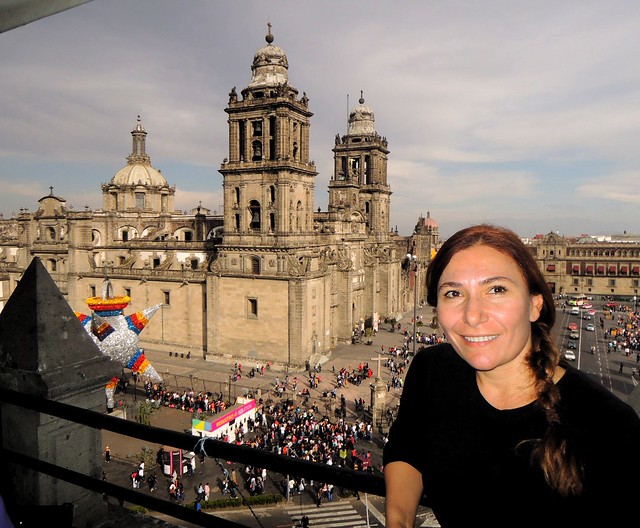 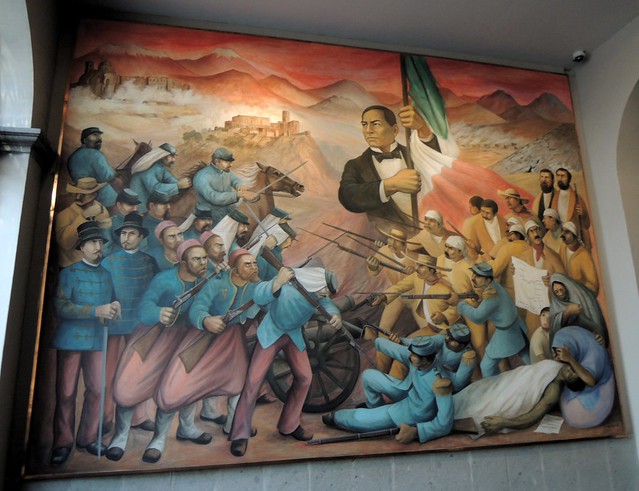 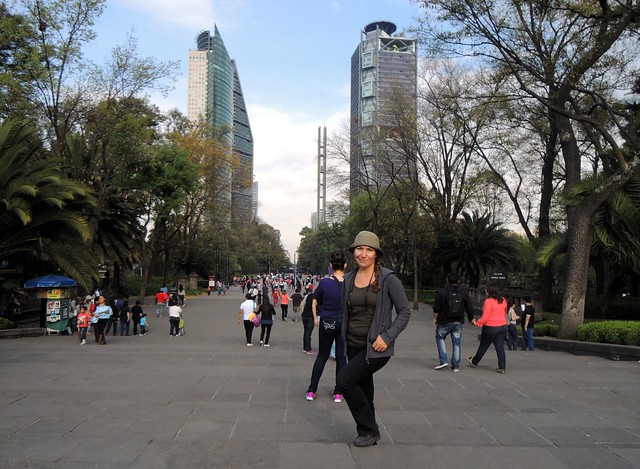 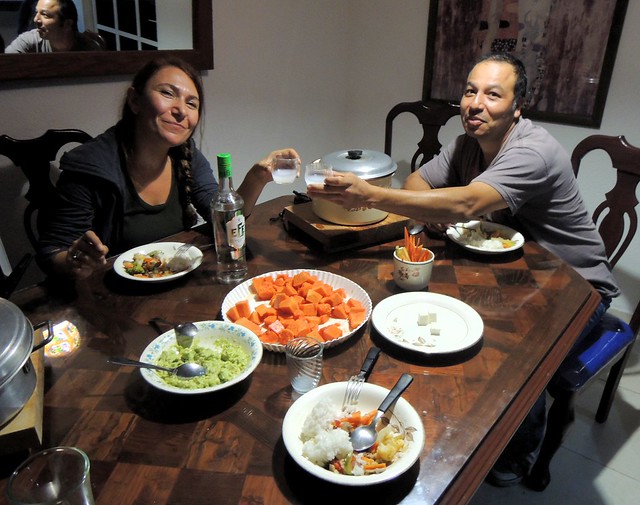 I did get back to the Anthropology Museum for the first time in 20 years.  How have I managed so many visits to Mexico City and had only been to that museum once?  It’s huge and worth a visit every time.  We timed it to start our museum tour with one of the excellent free tours (visitas guiadas — only in Spanish, I believe).  Our guide, Rosaria, gave an easy to understand overview of civilization in Mesoamerica from the advent of agriculture to the arrival of the Spanish. We spent a couple more hours on our own after the tour, but we just scratched the surface.  It must take a week to do that museum justice. 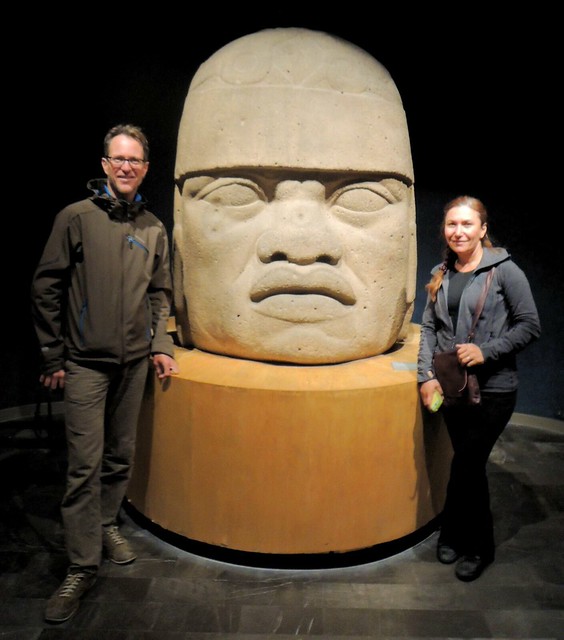 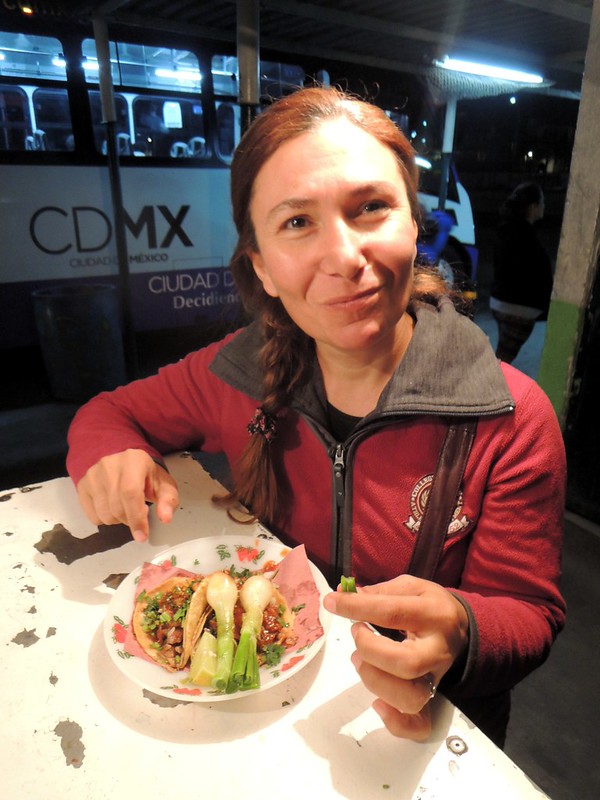 One evening we met Isaac’s friend, Ayax (and another friend, Luis, who I hadn’t met before), in Coyoacán where he took us to a favourite restaurant with good pizza and excellent beer.  By consensus the best beers were from the Minerva Brewery in Guadalajara.  I was excited to see a craft beer movement emerging in Mexico. 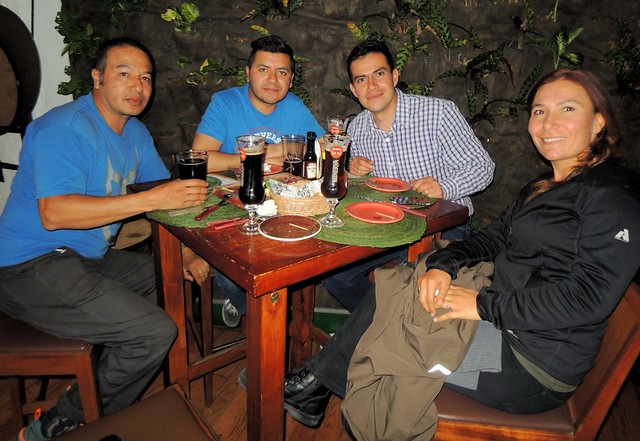 Ostensibly our reason for meeting Ayax that evening was to borrow a second rope for a climbing excursion to Hidalgo the following day.  Isaac took Ferda and me to Las Ventanas where we did a multi-pitch climb to the top of La Ventana Mayor followed by a couple single-pitch sport routes at a lower crag.  We quit a little early to get to Mineral del Monte before dark.  Isaac was rather surprised to hear I had never been there before.  It’s another Pueblo Mágico and fully deserves that designation.  Even though it was crowded, it was fun to walk around, and we especially enjoyed their culinary speciality, enchiladas mineras, after a day on the rock. 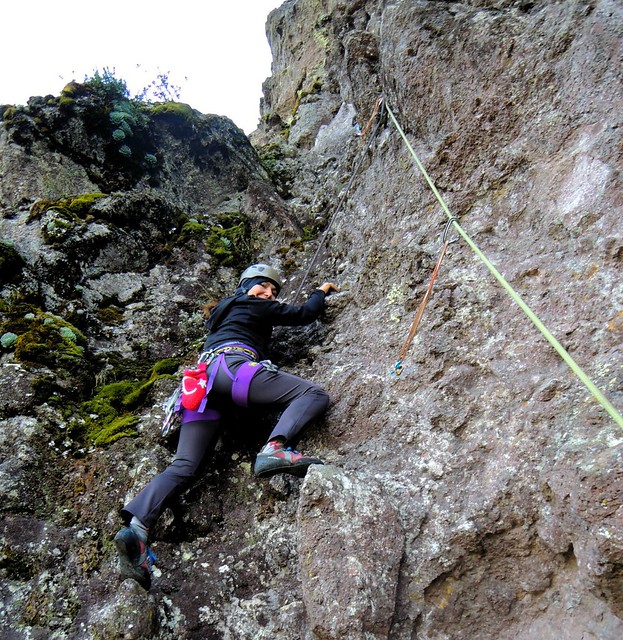 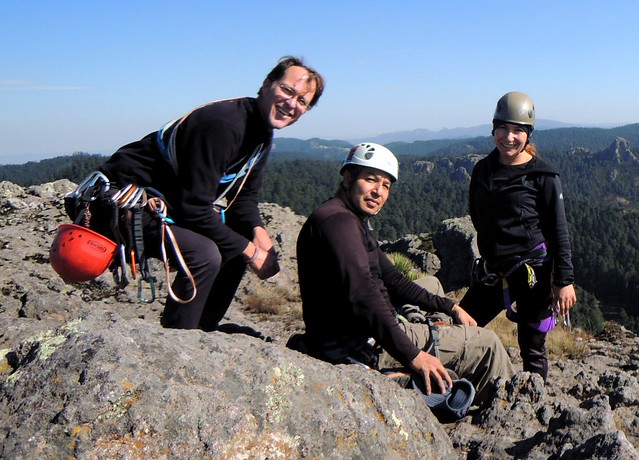 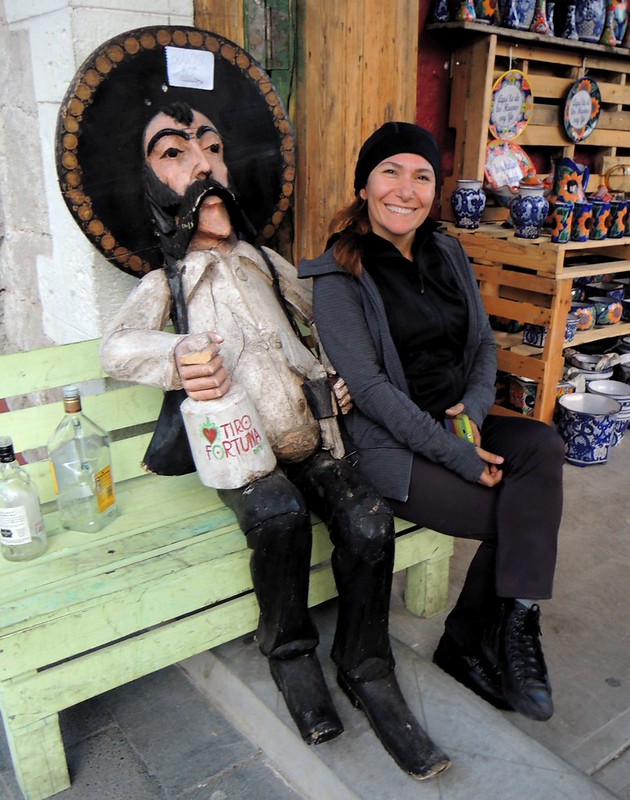 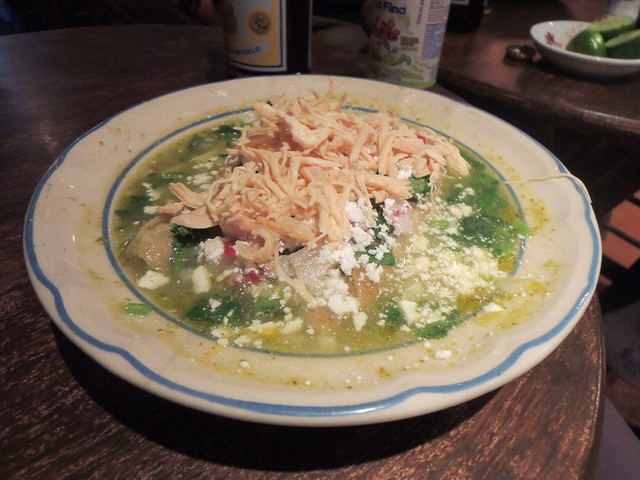 The last climbing that Ferda and I did in Mexico was way north in Monterrey with both Isaac and Ayax at the famous Potrero Chico.  Ferda loved these mountains and especially liked being there with Isaac and Ayax who were great guides.  We climbed a couple small pinnacles the first day… 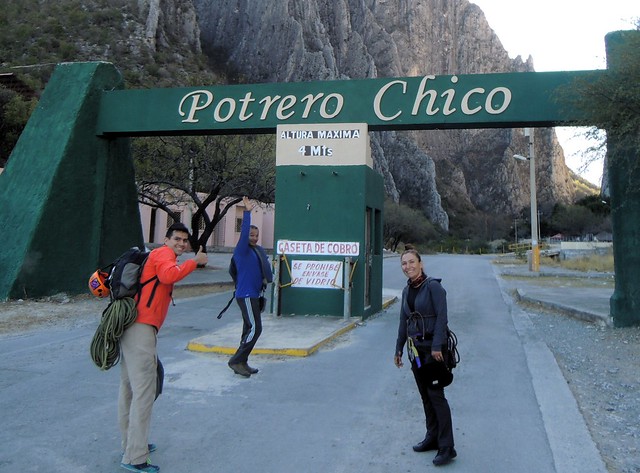 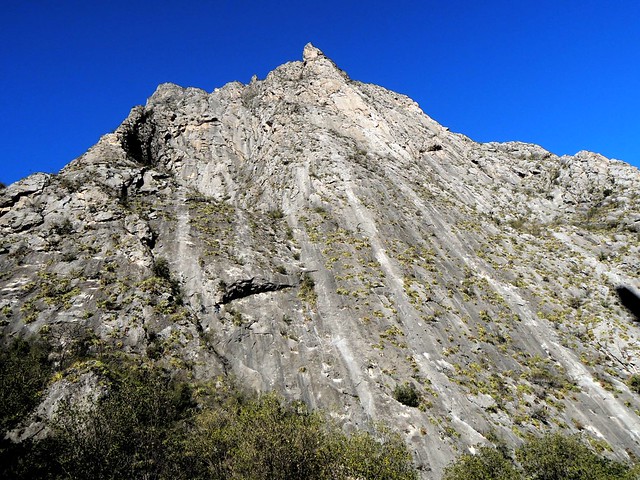 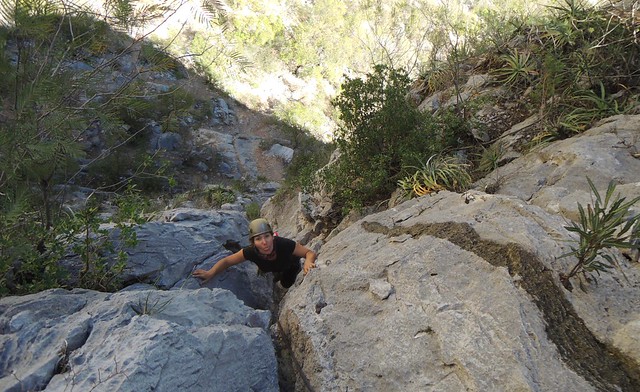 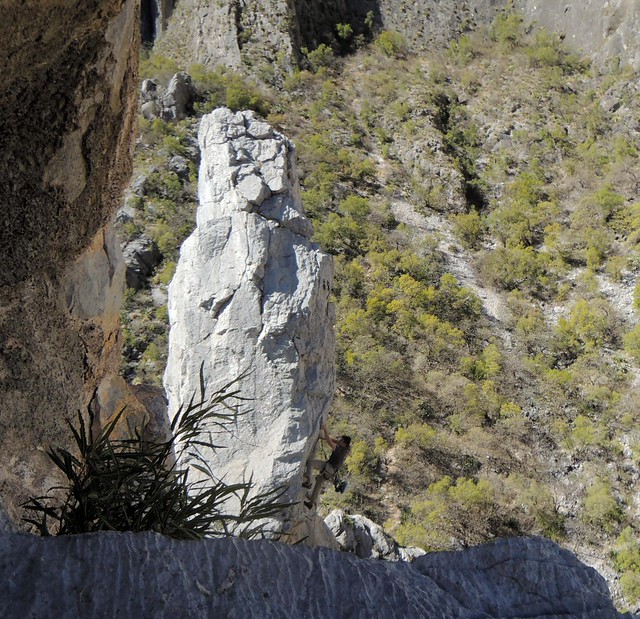 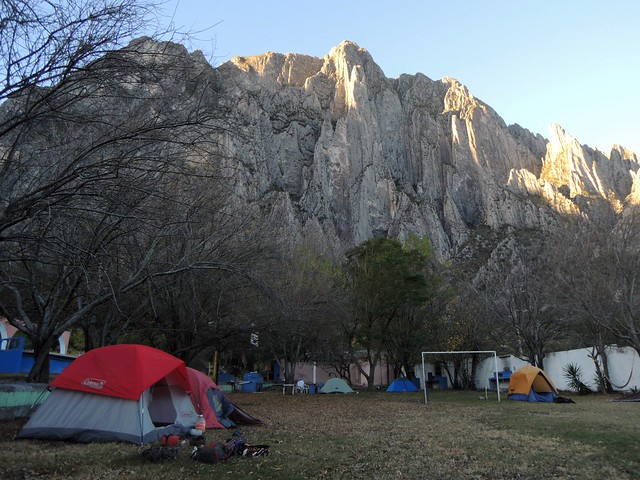 and then had our sights on the 240m 5.11a Super Nova for day two!  Most of the climb is 5.8 so if you can scratch your way up the first pitch (I managed), you’ll be fine.  Sport climbing in Potrero Chico and in Mexico in general is rather burly compared to Turkey since the Mexicans put in about half as many bolts.  The 5.11a first pitch of Super Nova is thankfully an exception.  With eight 30m pitches, Super Nova is still the longest route Ferda has done. 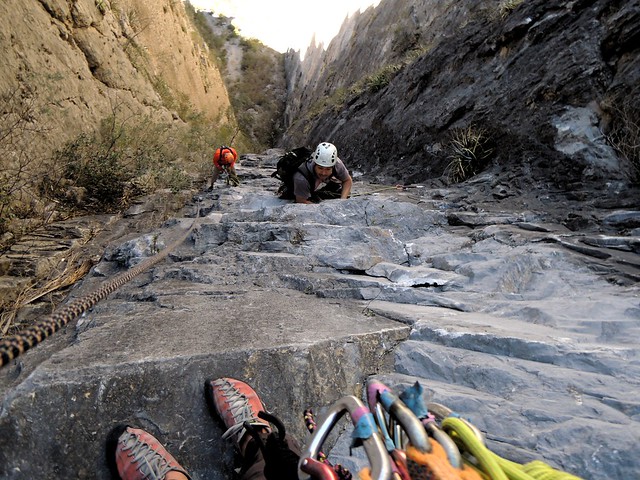 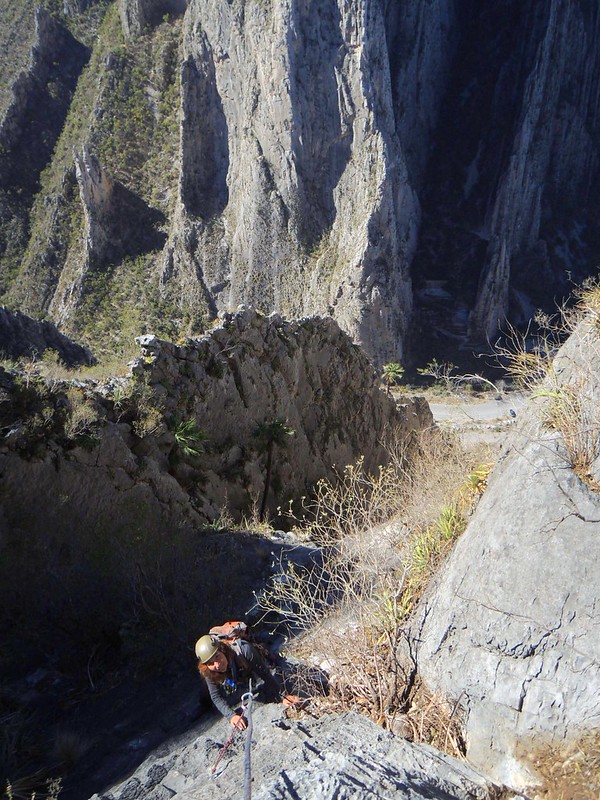 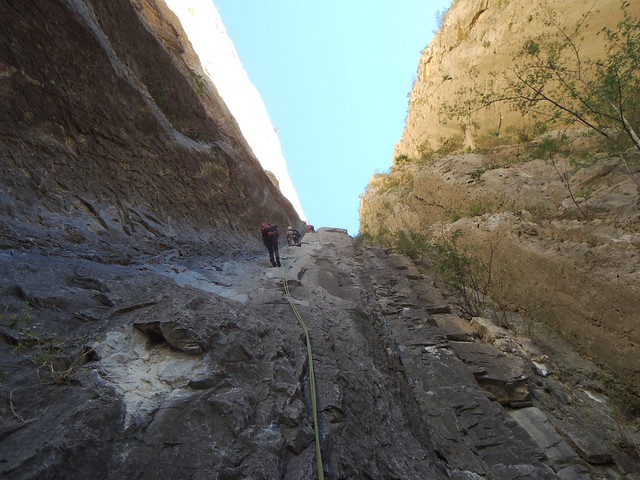 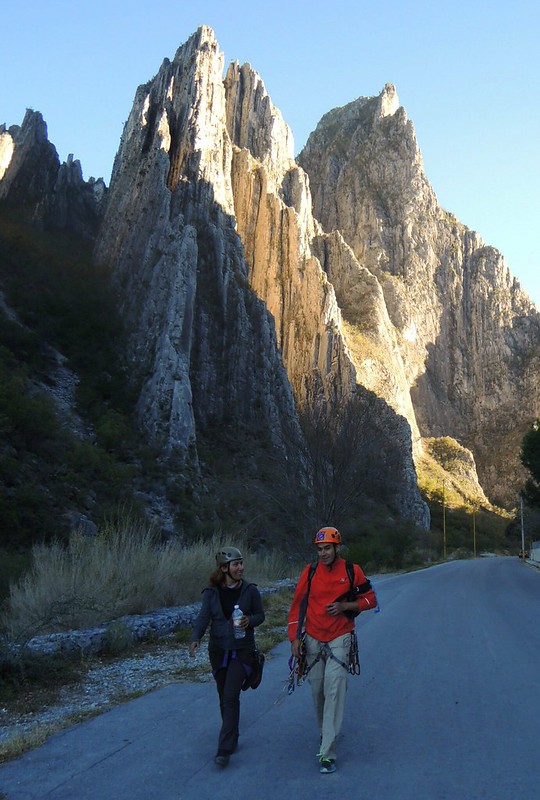 In comparison our final day of climbing was pretty casual.  “Potrero Chico casual” that day included a three-pitch 5.9 plus a couple single pitch routes.   Mostly we were looking forward to getting back to camp a little early to fully enjoy our farewell bbq.  The grill started with squash followed by costilla (ribs).  Next came bell peppers stuffed with cheese and spices followed by more and more cuts of meat.  According to my notes, by the end of the evening the four of us had managed four 1.2l bottles of beer, two 750ml bottles of wine, and almost 3kg of meat.  Thank you, Isaac and Ayax, for a super first trip to Potrero Chico.  Let’s do it again. 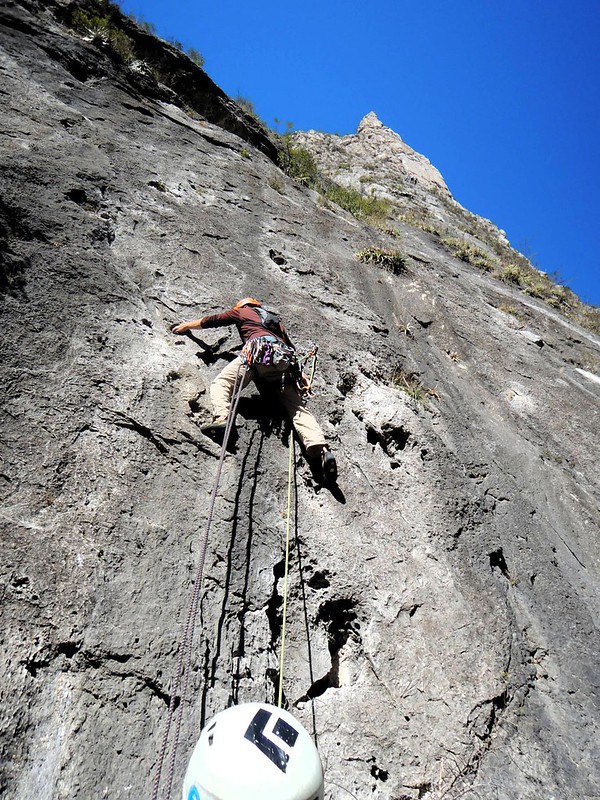 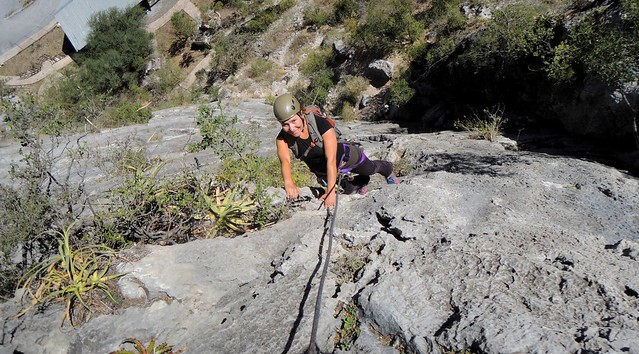 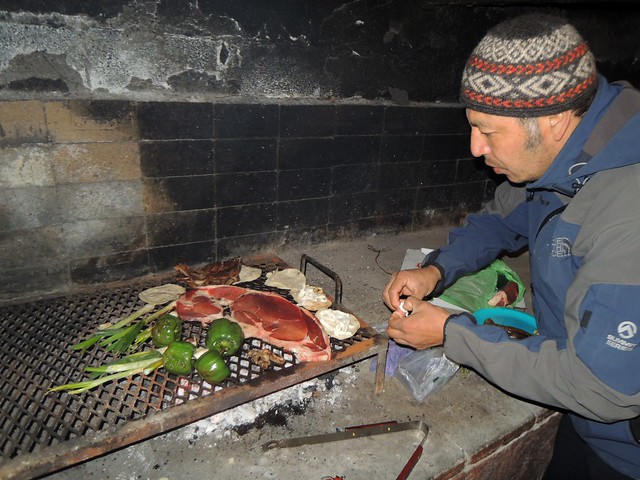 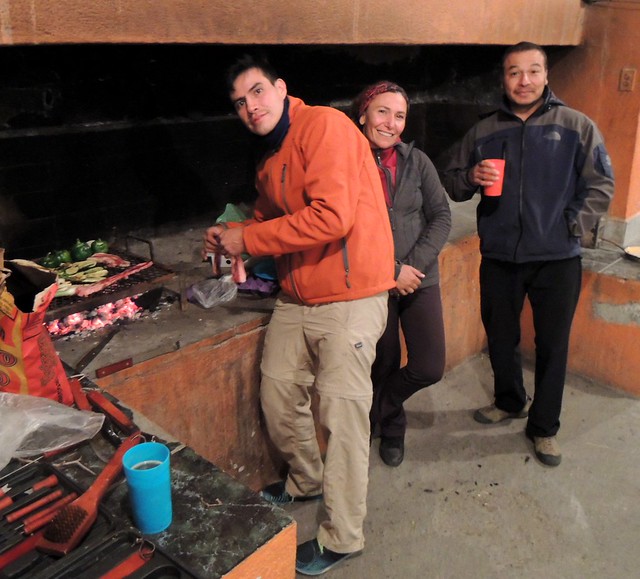