Five winter days in Kaçkar with İsmet and the Bulgarians

I wanted to call this post “skiing in Kaçkar”, and, well, the week started with skiing, but it didn’t end with skiing.

I took an overnight bus from Niğde to Erzurum, went straight to the hotel where I always stay in Erzurum, and was able to check into a room in spite of the early hour (7am).  It was a 15-hour trip from Recep’s place in Martı Mahallesi to the (famous?) Kervansaray Hotel in Erzurum.  Zekeriya, the manager, recognized me, but I didn’t recognize him at first — he lost weight, grew a beard, and had on a spiffy pink dress shirt.  Looking good.

As arranged by İsmet, I met Yılrıdım at his shop and picked up some rental AT (aka randonnée) gear — boots, skis, and skins.  Before heading off to the (somewhat remote) Kaçkar Mountains for five days, I took a taxi up to Palandöken to test the equipment at the local ski resort. 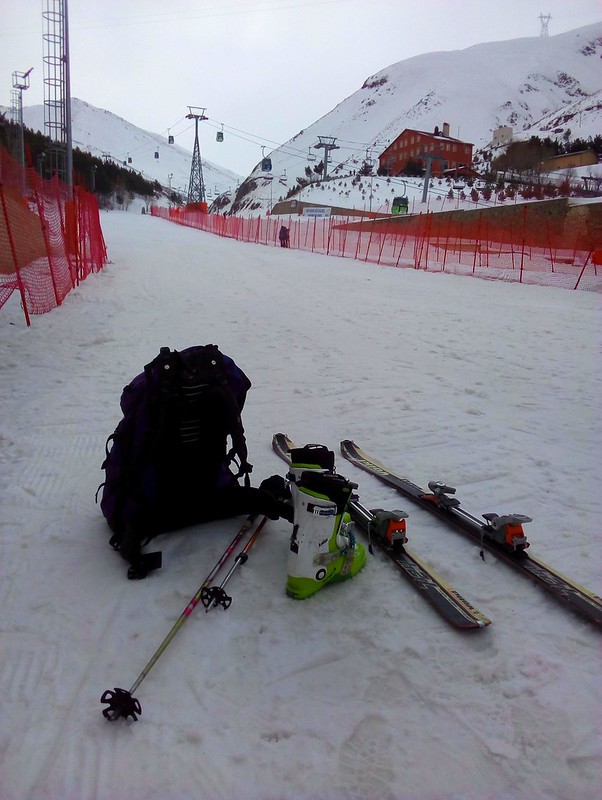 This is what one might look like after spending three hours skinning up 900m to just over 3100m. 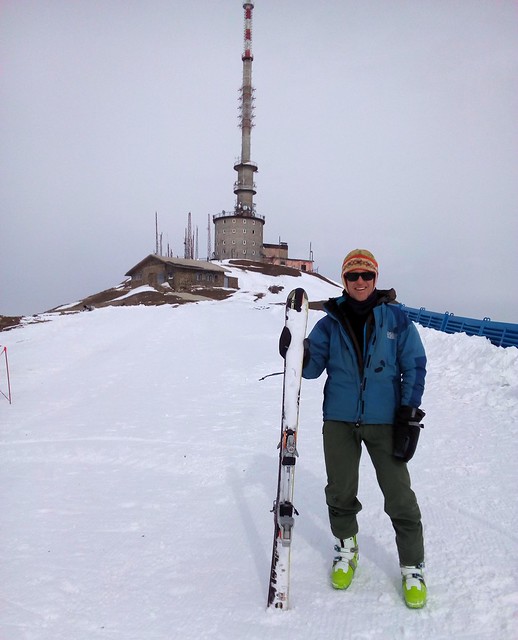 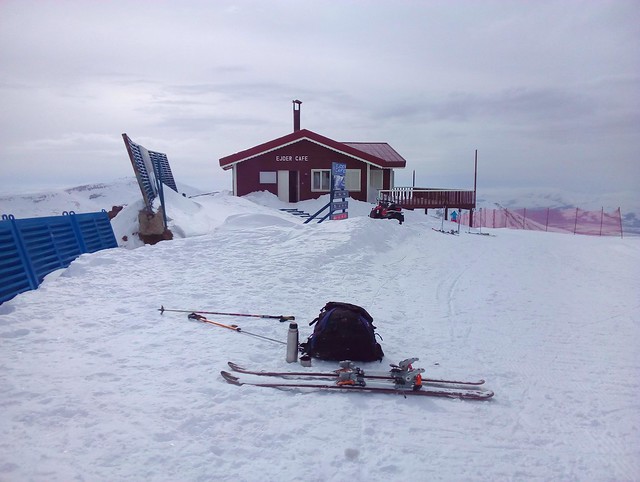 The ski down in plastic boots and locked heels was easier than I expected.

A group from Bulgaria had booked a tour with İsmet as their guide.  Like a parasite I hopped onto their ride to Yaylalar.  Their driver was İsmail who I’ve hired at least twice to get me to and from Yaylalar.  This time we stayed at Naim’s place (Naim is İsmail’s brother), Çam Yuva Pansiyon in Yaylalar, a first for me.

I joined the group for their first day — a short, warm up day (does an 1100m climb count as a warm up day?) — straight up the north facing drainage from Yaylalar.  I had never been up this valley before. 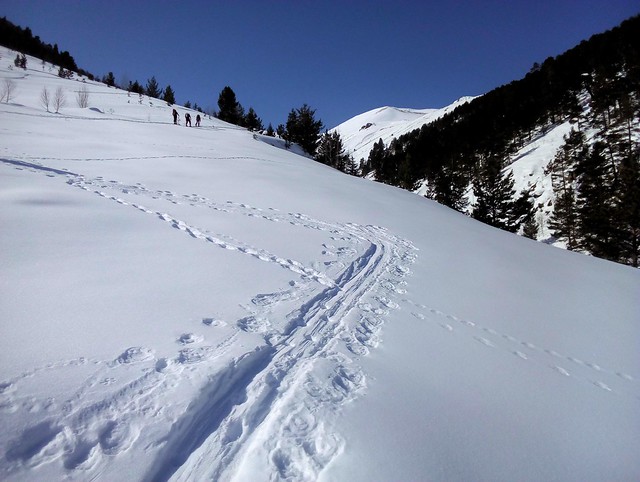 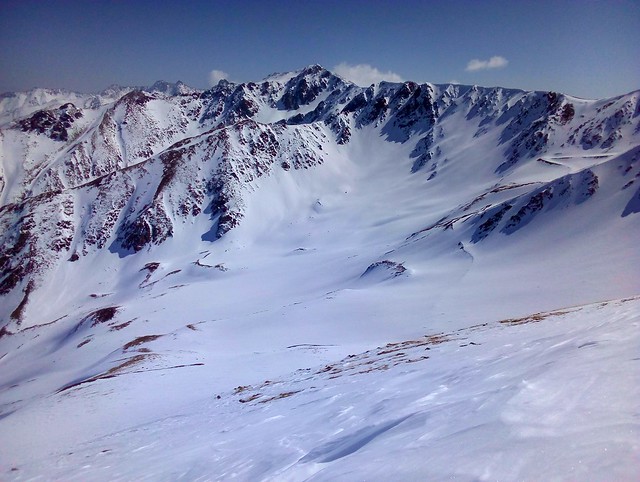 We topped out on the ridge to the west and dropped into a smaller valley north from there. 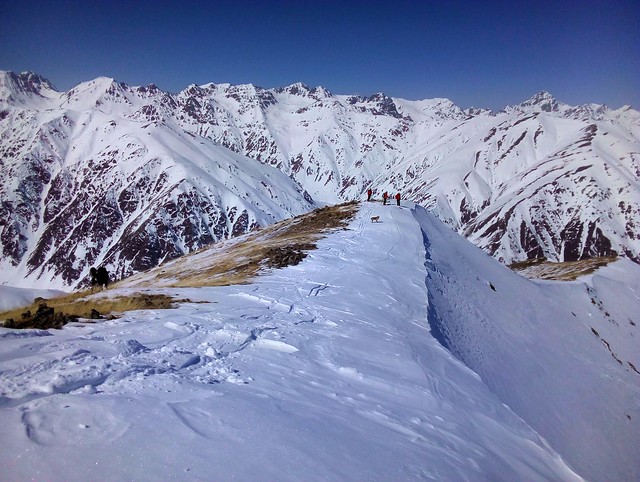 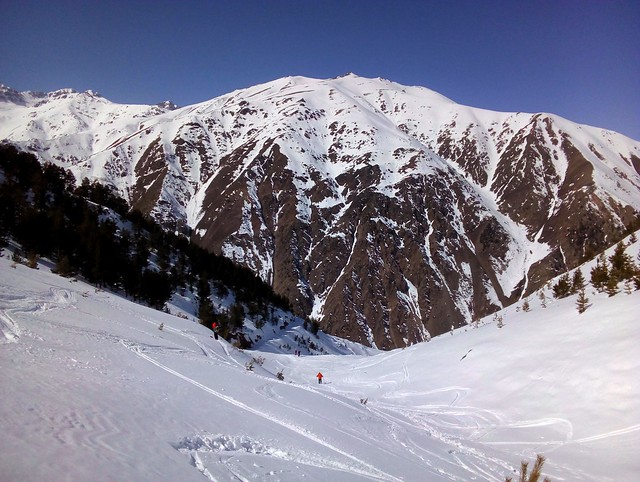 It was my 4th winter trip to the Kaçkar and certainly was the least and worst snow I’ve experienced there.  What to do?

The following morning I took off at the same time as İsmet and the Bulgarians.  They ended up doing the very fun loop north from Olgunlar to Satelef Yayla, a route that İsmet and I did last year in a white out.

I, on the other hand, took bivy gear and spent eight hours to ski (and later walk) up from Yaylalar to Deniz Gölü.  The route climbs 1500m over 13km.  It doesn’t get steep till the last bit passed Dilberdüzü.  Up there I decided kicking steps in my plastic boots felt safer than sliding around on my skins on the steep hard-packed snow. 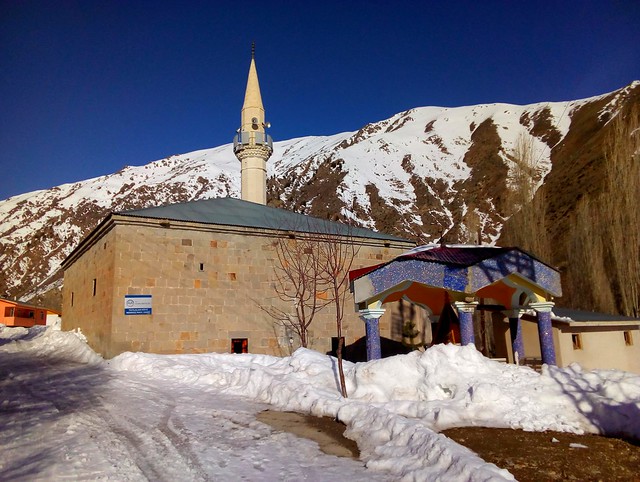 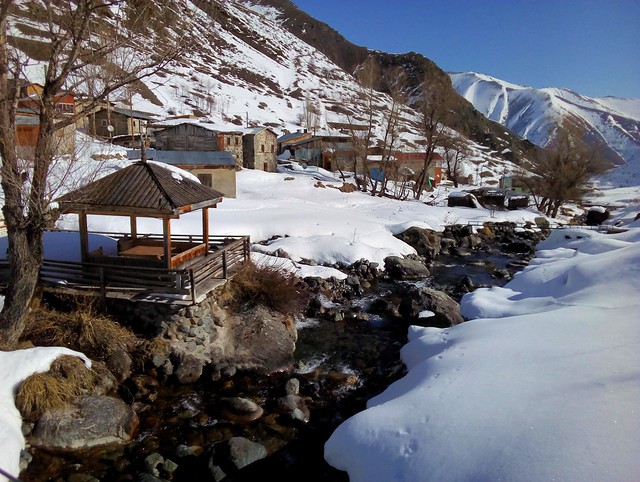 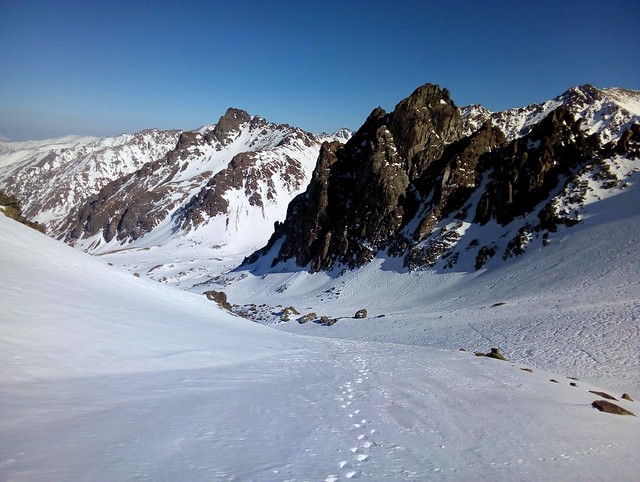 Does it look like a comfortable place to spend the night? 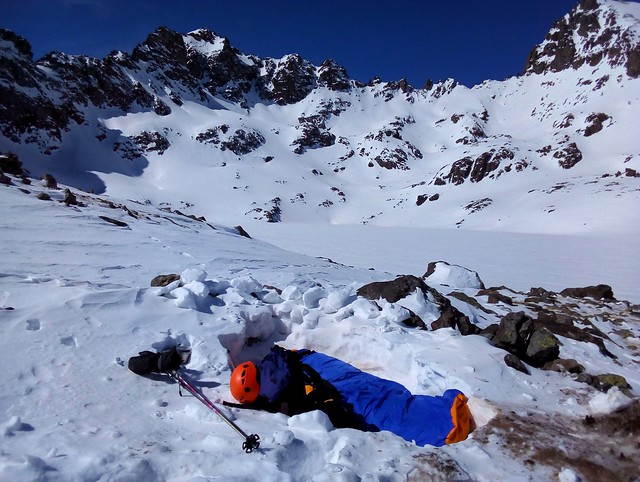 The last of the sunlight lit up my goal for the morning. 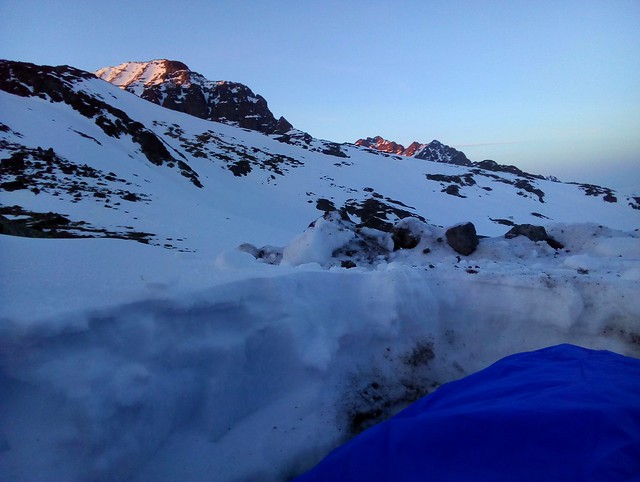 And the route was even more clear in the morning. 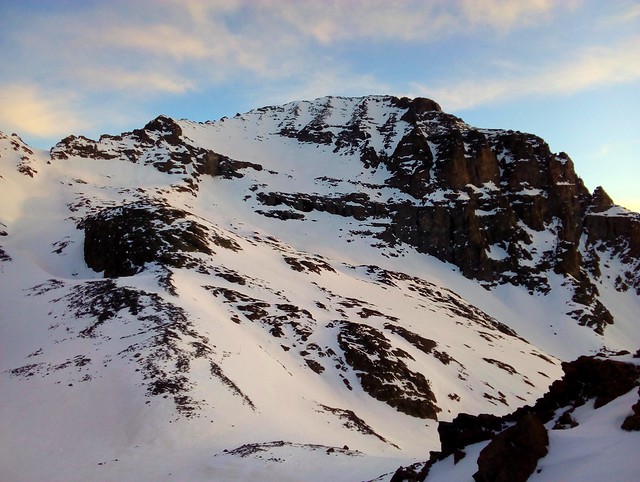 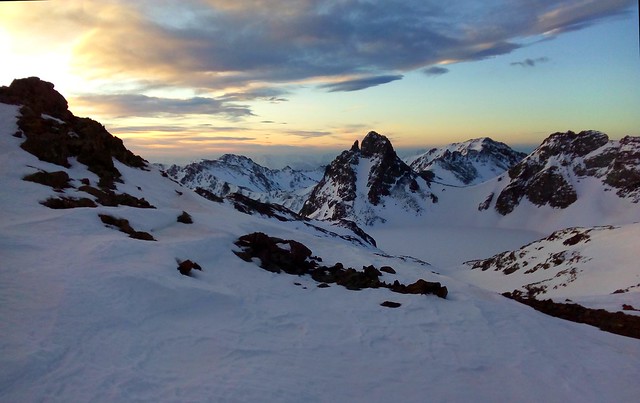 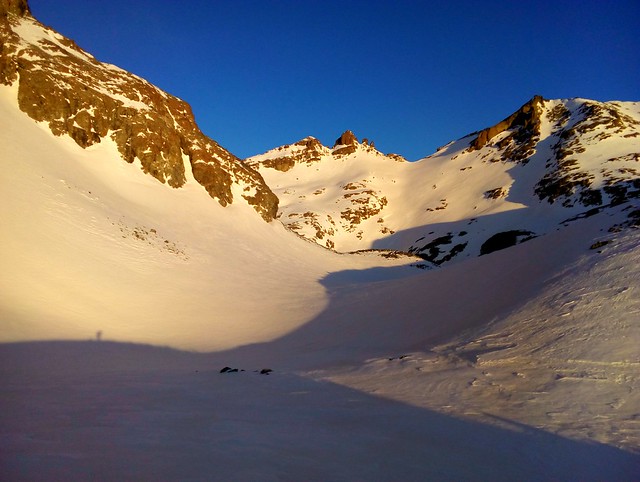 With crampons on the whole way it was about three hours from Deniz Gölü to the summit. 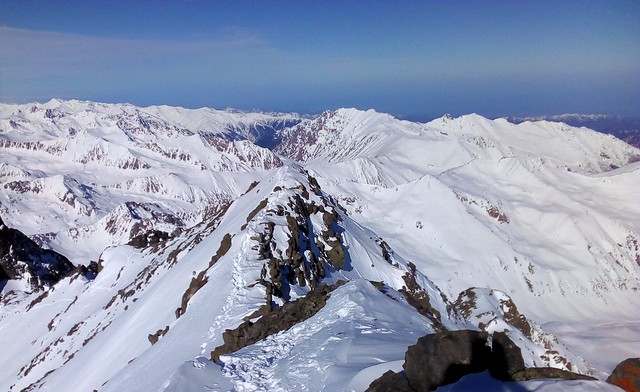 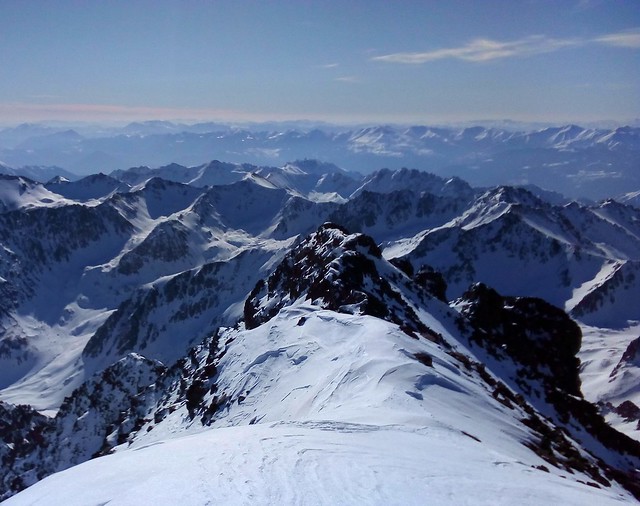 I knew when I rented the boots from Yıldırım that they were a bit too narrow, but I took them anyway because he didn’t have any others.  I didn’t realize quite how bad they were until this day.  Making my way down from the summit of Kaçkar Dağı was rather painful.

I was happy to see Olgunlar: 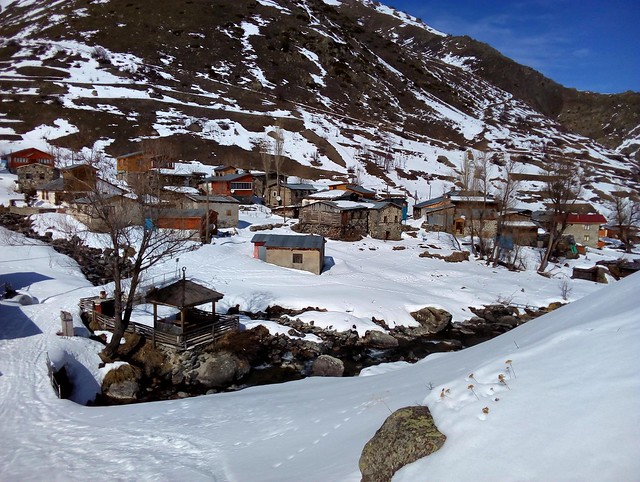 and even happier to see Yaylarlar: 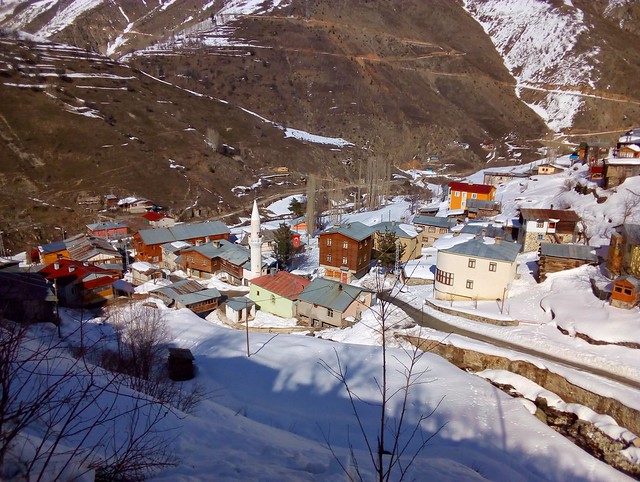 My left foot in particular was pretty swollen and beat up.  Even now, 10 days later, as I’m writing this, my left foot has some pretty good scabs and a thick line of discoloration extending from the middle of the arch all the way to the heel.  It’s still sore.

I took a (foot) rest day the next day.

For my last day in the Kaçkar I put on my comfy leather telemark boots and walked up the unnamed 3001m peak ~4km NNE of Yaylalar, an 1100m climb (for a warm down day?).  I walked down to the stone bridge and headed up the valley through the village of Karamolla. 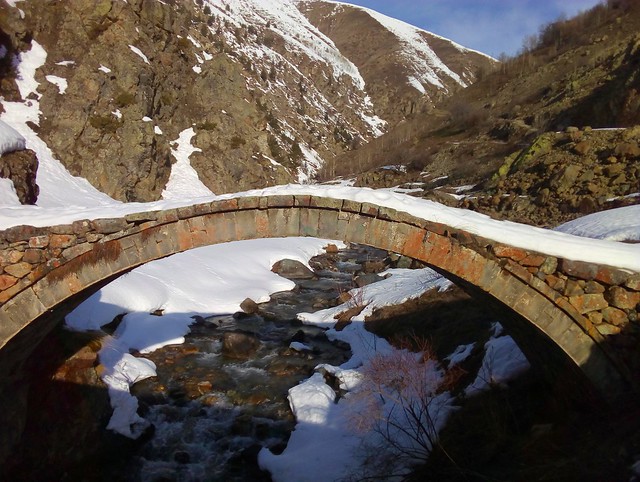 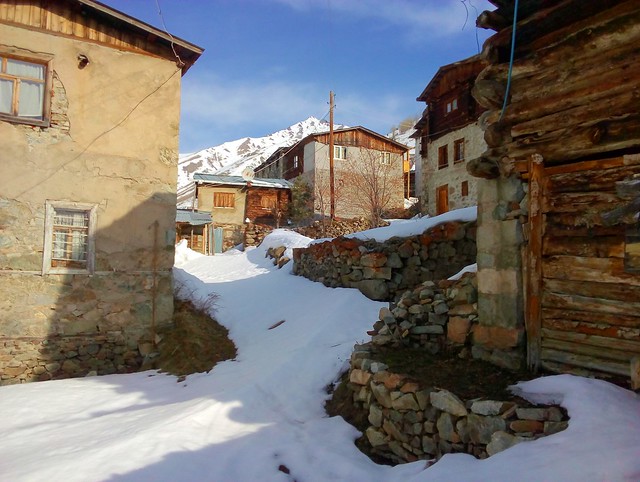 Körahmet is a particularly handsome village, but I turned off for my climb just before arriving at that village since the morning’s hard snow required crampons (that I didn’t bring) to safely arrive.  Here’s Körahmet from across the small but steep valley:

I hung out for about an hour on the summit enjoying my last day in the mountains.

Little did I know what was coming.  The following day I couldn’t understand why the Erzurum bus station was so crowded.  I then learned the government had just closed schools as a covid 19 prevention measure.  The bus station was busy with everyone returning home.  A couple hours later I learned Nepal stopped issuing tourist visas.  All that training just for fun! 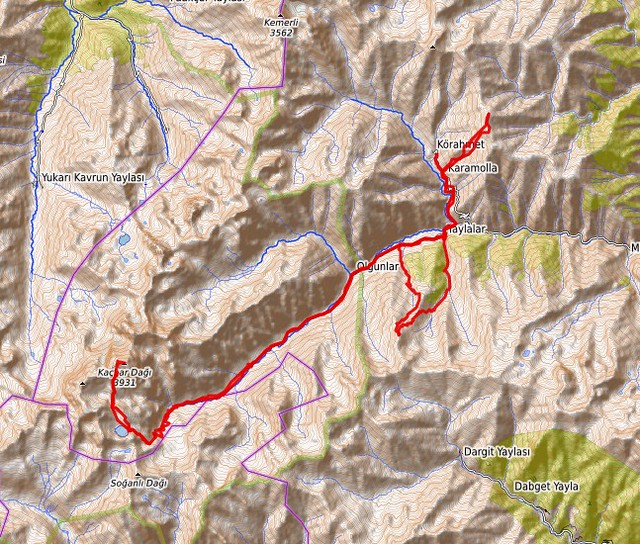