Auto-touring the eastern Sierra with Megan

From Anchorage Ferda and I flew to southern California and managed to fit in a short car camping trip with Megan while she still had a few days off.  Growing up in southern California, both Megan and I have made many trips through the eastern Sierra, but there’s still a lot to see.  The main goal of this trip was to visit the bristlecone pines in the White Mountains, but we also stopped at Fossil Falls, Alabama Hills, Manzanar, and Gardisky Lake — all places that none of us had been to before.

Fossil Falls was Chad’s recommendation and a place my grandma enjoyed visiting as well.  It’s a short detour off 395 near Little Lake.  An ancient river sculpted a small canyon through the basalt leaving interesting rock formations.  Supposedly there are Native American grinding stones and petroglyphs around, but we didn’t have any luck finding these.

The short walk to the canyon reminded me of the area around Palm Springs. 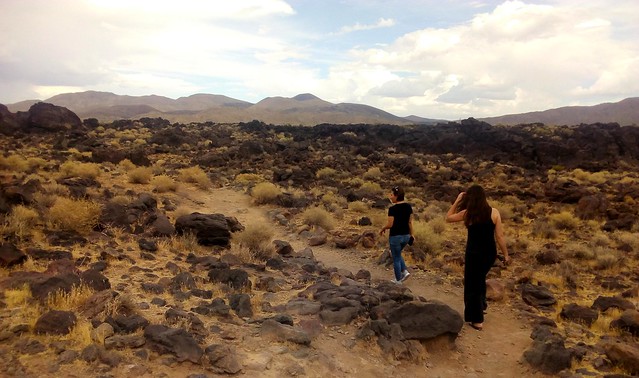 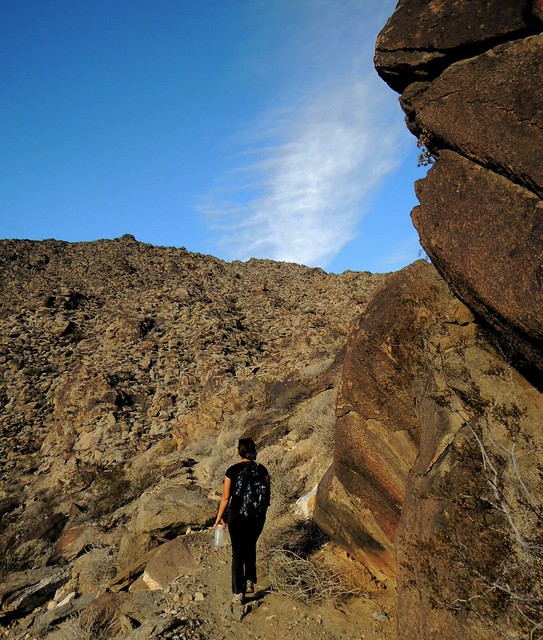 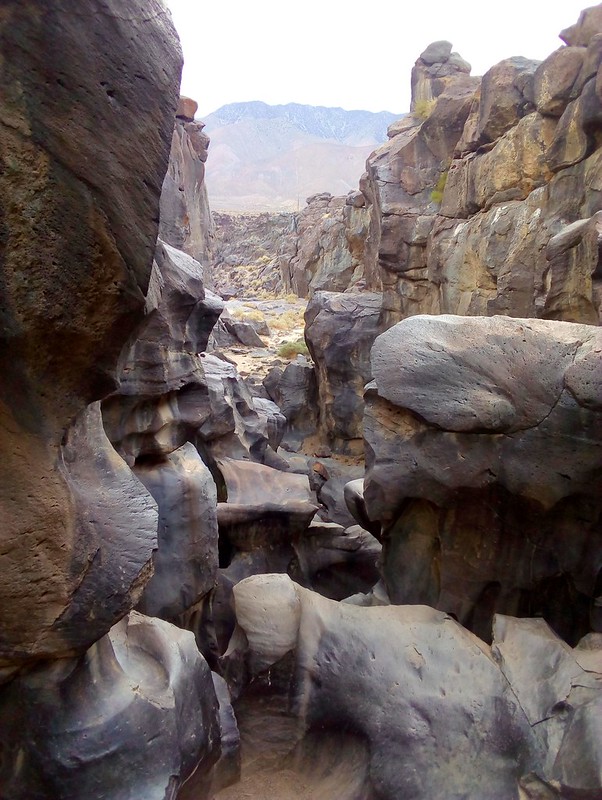 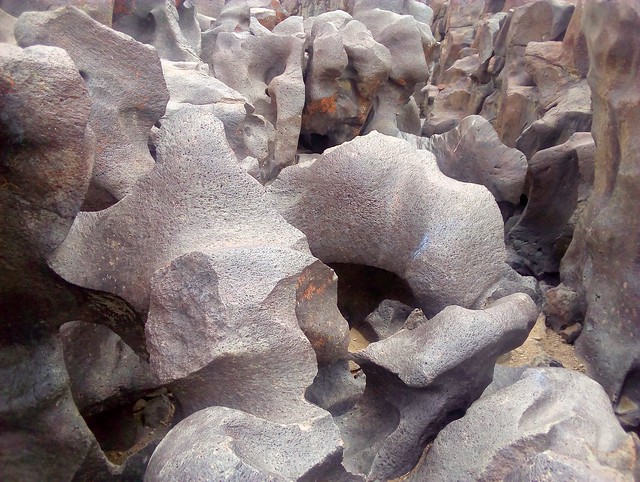 There’s a campground at Fossil Falls, but we pushed on that afternoon to Alabama Hills where we found good camping among the granite boulders. 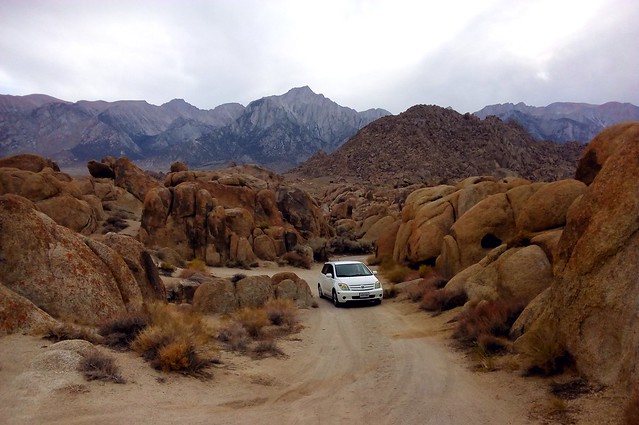 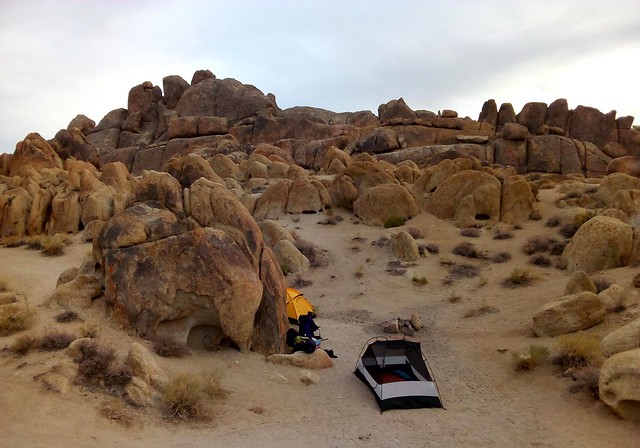 The BLM-administrated Alabama Hills Recreation Area was first made famous as the filming location of many old Westerns (imdb lists 370 movies filmed at Alabama Hills!).  Now it seems like the popular thing to do is take short hikes to look at the numerous arches and enjoy the beautiful views of the Eastern Sierra. 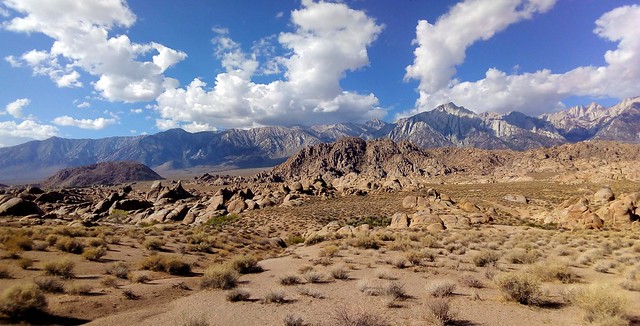 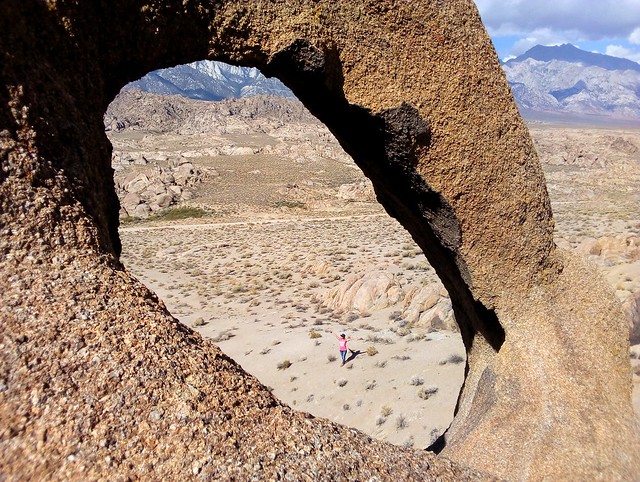 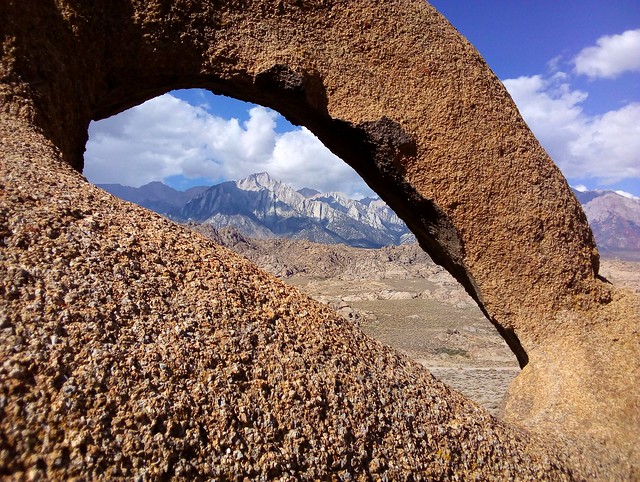 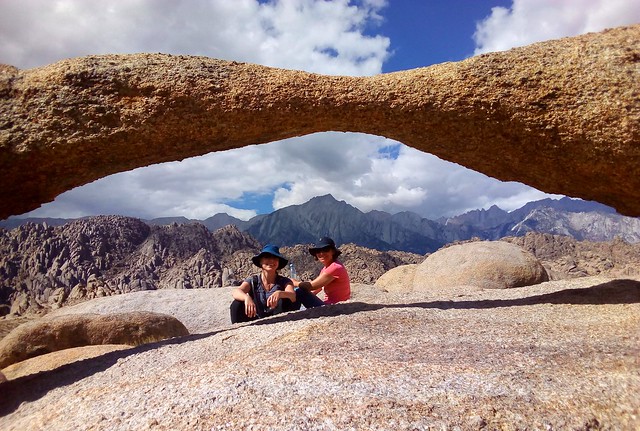 and the aptly named Mobius Arch: 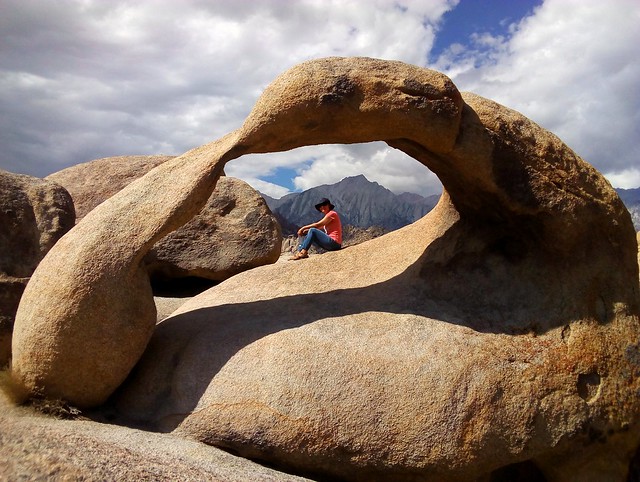 A bit further north is more federal public land, the Manzanar National Historic Site, where we learned about a very grim episode in US history.  Manzanar is one of the concentration camps where US citizens and newer immigrants were detained during WW2 for doing nothing wrong except having Japanese ancestry.  The site is well done and certainly worth a stop.

That afternoon we drove up to 2600m to spend a couple nights at the Grandview Campground, certainly the closest facility to the Ancient Bristlecone Pine Forest in the White Mountains.  To really see the bristlecone groves (that are still quite a ways from the campground) you really ought to spend at least three nights at the campground there.  However, we managed to see the Schulman Grove, Methuselah Grove, and the Patriarch Grove in one long day the following day.

The bristlecones are the oldest living trees in the world.  They grow at high elevations (starting at 3000m) in areas of highly alkaline soil where nothing else can survive.  The oldest known bristlecone is over 4800 years old, somewhere in the Methuselah Grove, and the largest known bristlecone is in the Patriarch Grove.  By correlating tree ring data from live trees, standing dead trees, and fallen dead trees, dendrochronologists have found 7000 years of climate record from the ancient bristlecones. 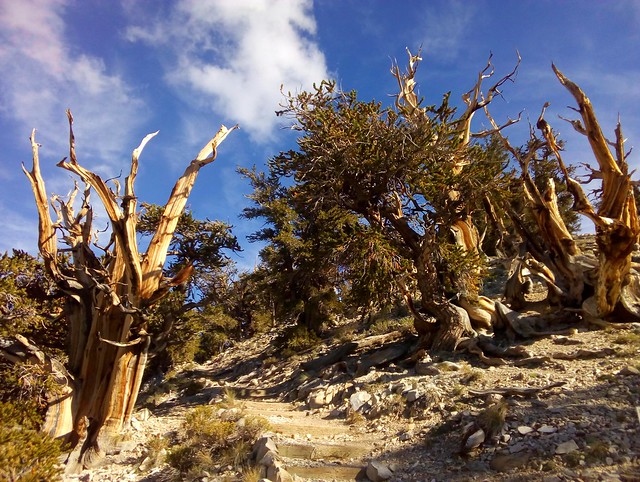 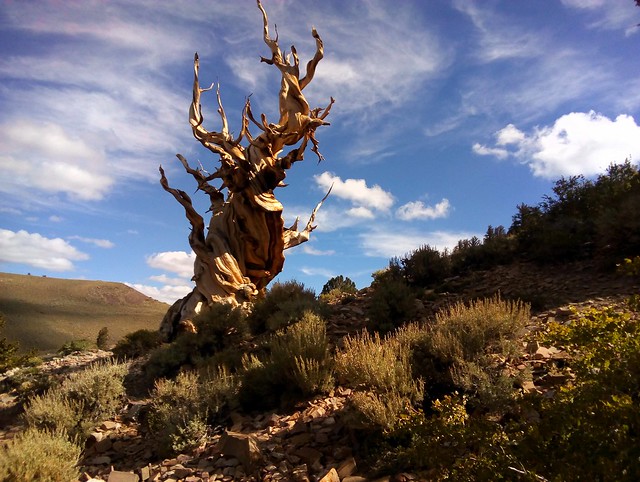 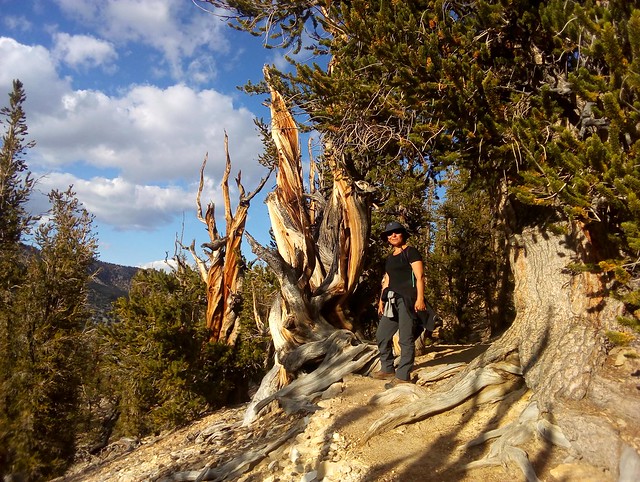 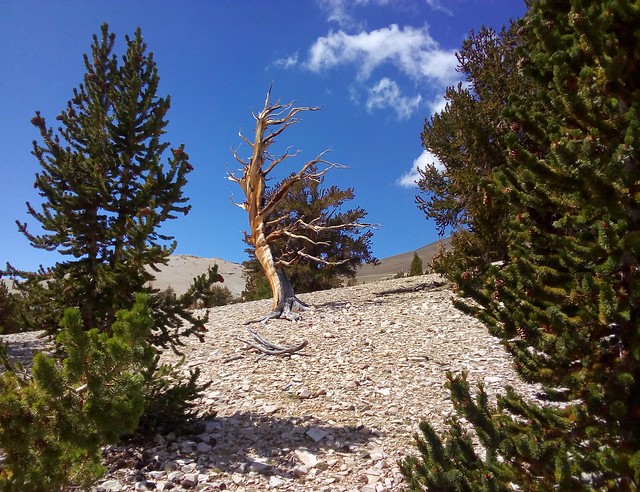 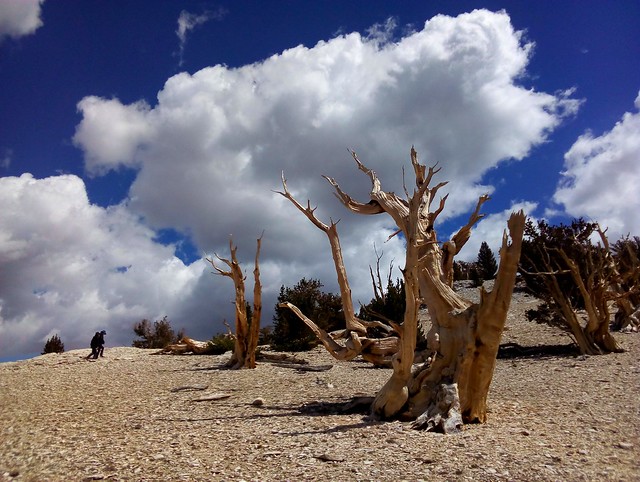 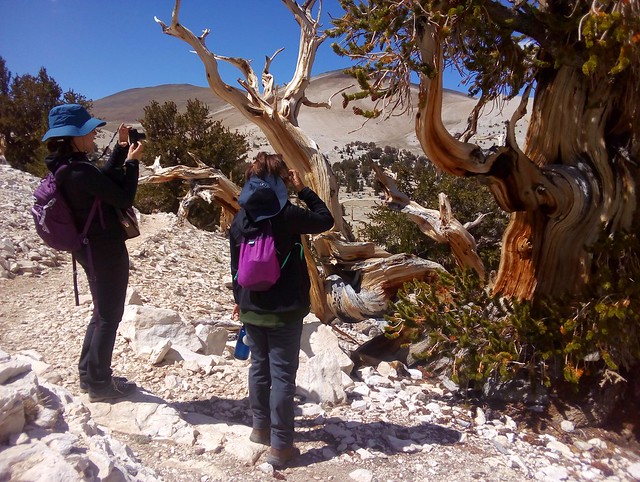 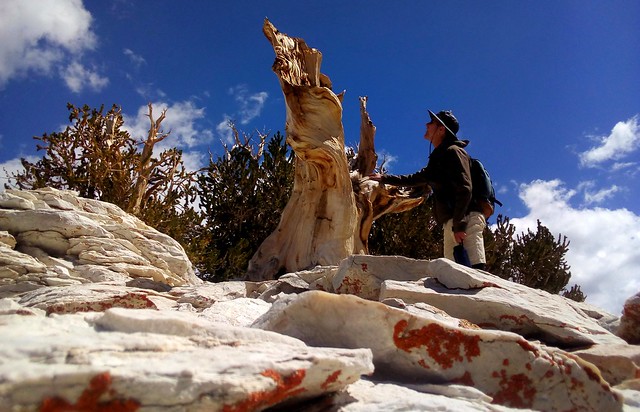 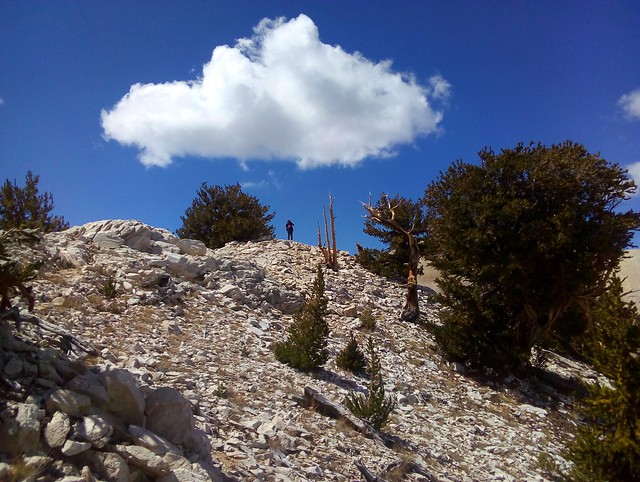 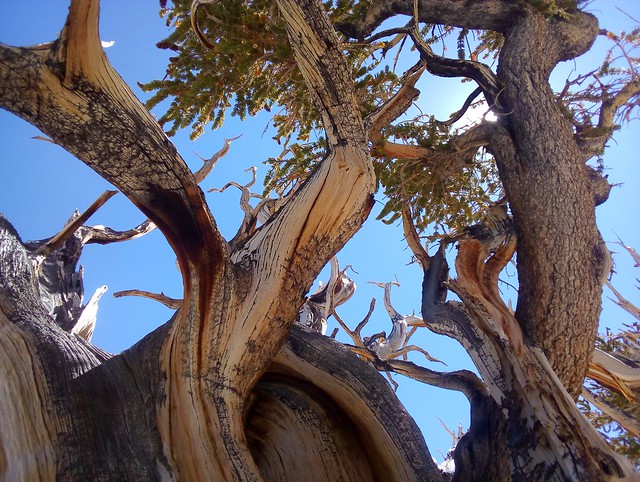 What I didn’t realize is that the “grand view” of Grandview Campground has nothing to do with the mountains or the trees, but instead with the big open fairly flat area in the middle of the campground that allows for a grand view of the night sky.  Completely coincidentally we happened to arrive just a couple days before the new moon when many astronomers were setting up their huge telescopes — so big that we had to step up onto a stepladder to look through the view finder of the largest telescope.  That one is considered the largest “portable” telescope in the world.  The astronomers were friendly and used to gawking tourists like us.  Before it got really, really dark, they showed us a few of the tourist highlights of the night sky.

Even without the telescopes we saw Venus, Saturn, Jupiter, and Mars all in the sky at the same time.  With the telescopes we were shown two galaxies including Andromeda, our closest neighbor.  We also saw two dead stars/planetary nebula — one donut shaped and one apple core shaped.  Finally, we saw two star clusters, the Rose Cluster (NGC 7789) and my personal favorite of the evening, the Owl Cluster (NGC 457).  The night sky was a great unexpected bonus to our tree adventure.

Our last stop before Megan dropped Ferda and me off in Yosemite was a short hike to Gardisky Lake (in the Hoover Wilderness) on the road out to Saddlebag Lake, just north of the Tioga entrance to Yosemite NP. 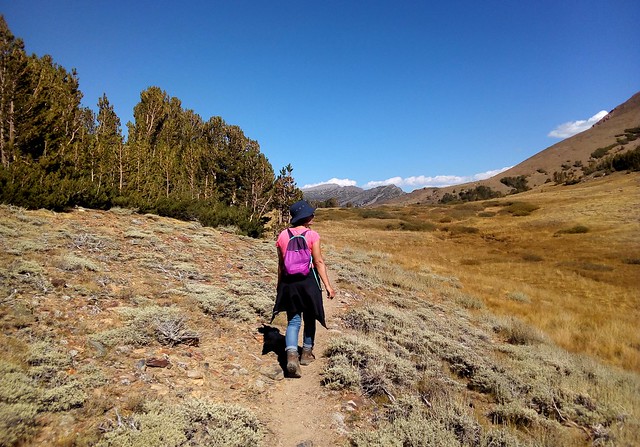 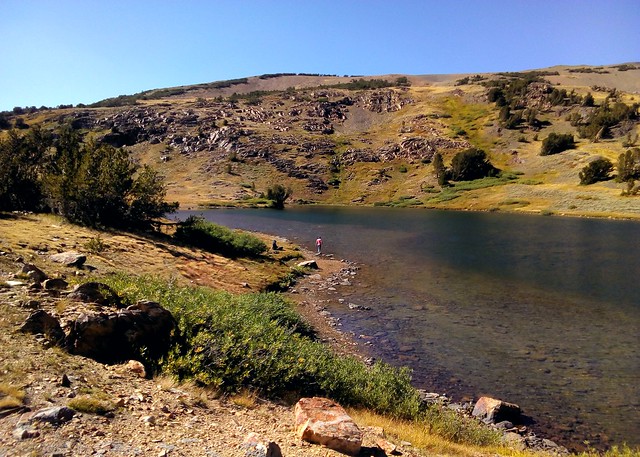 All these amazing site are on public land, in these cases federal land, something we need to be continually vigilant about protecting.  What the heck’s going on with Grand Staircase-Escalante NM and Bear Ears NM??!!  🙁

4 Responses to Auto-touring the eastern Sierra with Megan