Wow, three weeks cycling in South Korea went by really quickly.  I’ll try to give a bit of the best and worst that we found during this short visit.

It’s easy for me to succinctly summarize the highlights: the food and the generosity of the people.  Local cyclists often approached us during breaks, offering small snacks, apples, coffee, energy bars.  As I mentioned in my last post, a group of motorcyclists even invited us to join their bbq lunch one day.  The most generous Korean we met turned out to be Mac who we met a couple days before arriving in Busan.  When we tried to stop at a small shop that turned out to be closed, Mac guided us into the nearby village, found a small restaurant, and treated the three of us to tasty bowls of noodles. 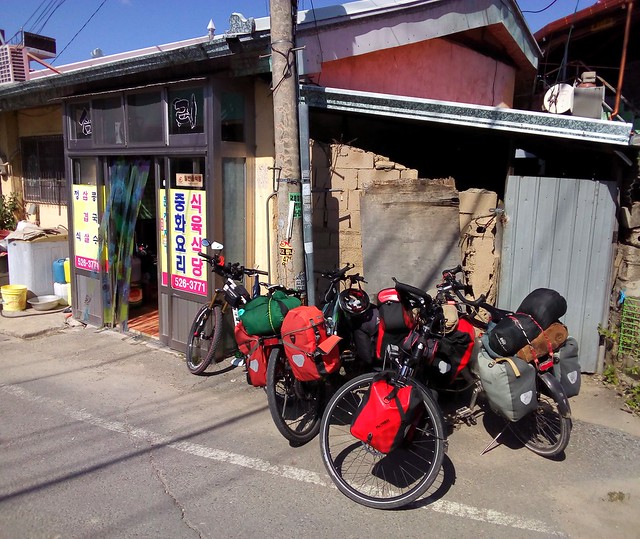 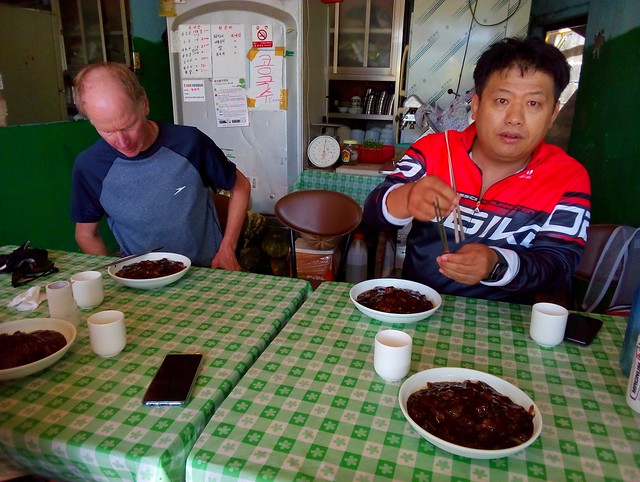 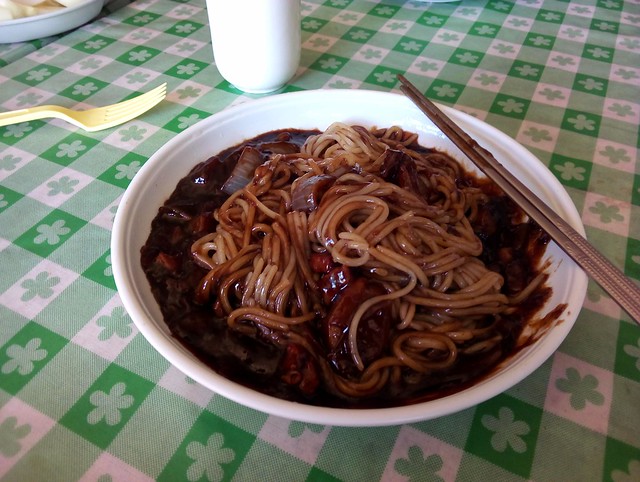 Mac led us the rest of the way to Namji, got back us on the bicycle path, and made us promise to call him when we arrived in Busan. 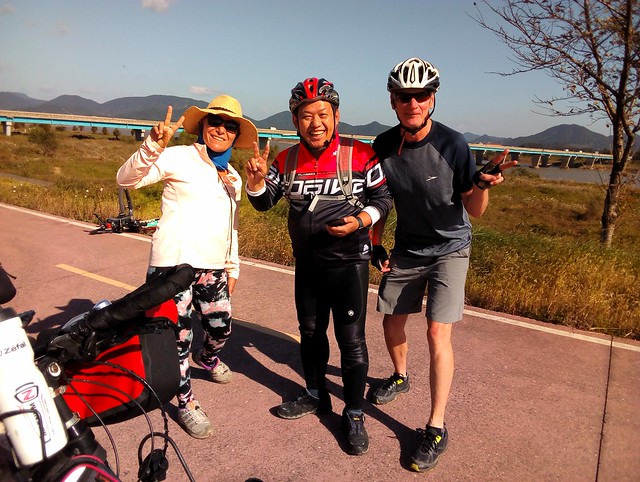 We met his wife, Jenny, and spent a very fun evening in Busan eating, drinking, talking, and laughing. 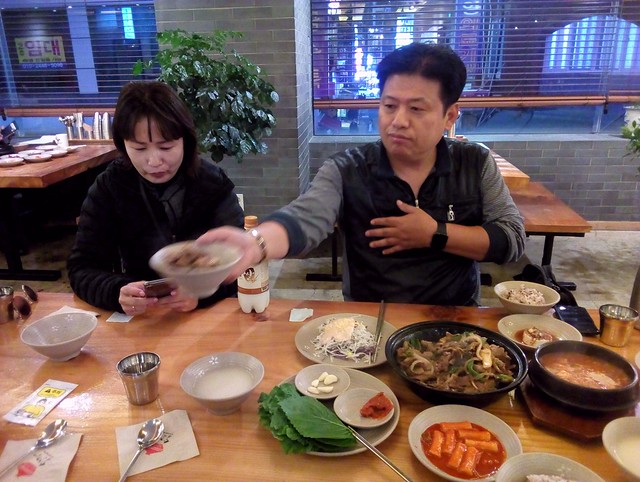 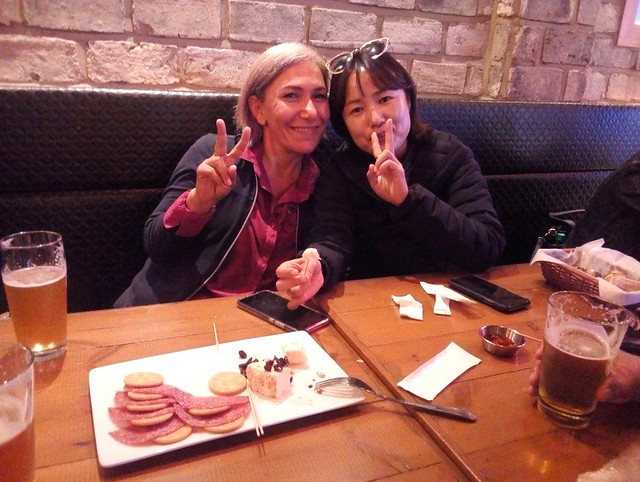 Thank you, Mac and Jenny.  Hope to see you in Antalya.

As for disappointments, well, the historic sites.  There doesn’t seem to be a lot preserved, and it felt to us like we were seeing the same buildings over and over. 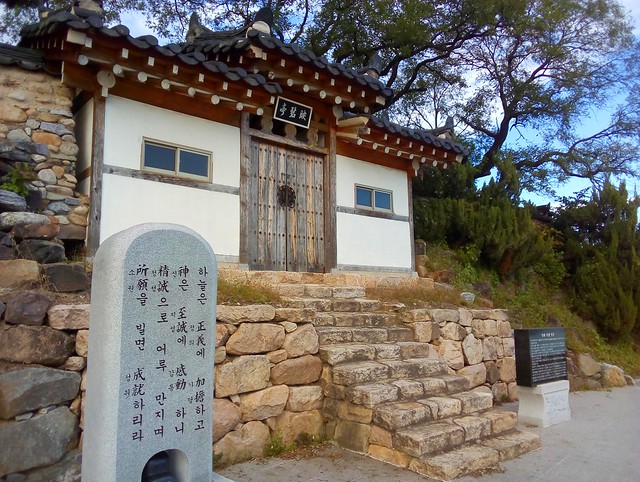 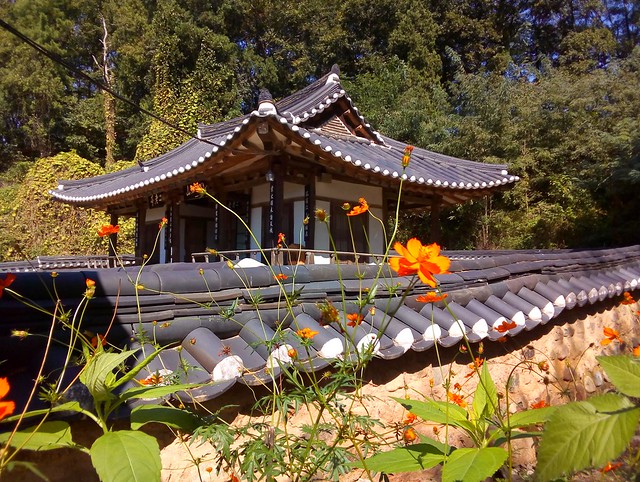 The thing is that the Joseon Dynasty lasted 500 years, and pretty much all the historic stuff is from that period.  Whether it’s old palaces, shrines, houses, or the Dodong-seowon Confucian Academy (the below photos), the architecture is similar. 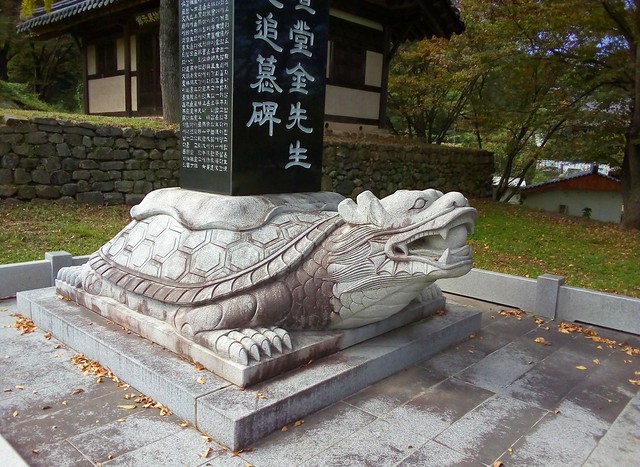 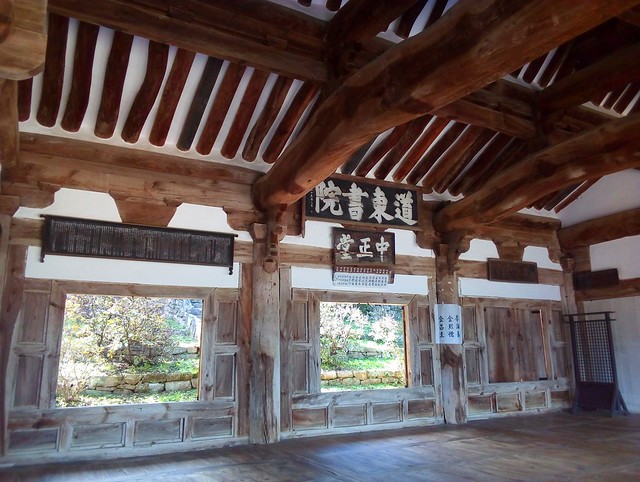 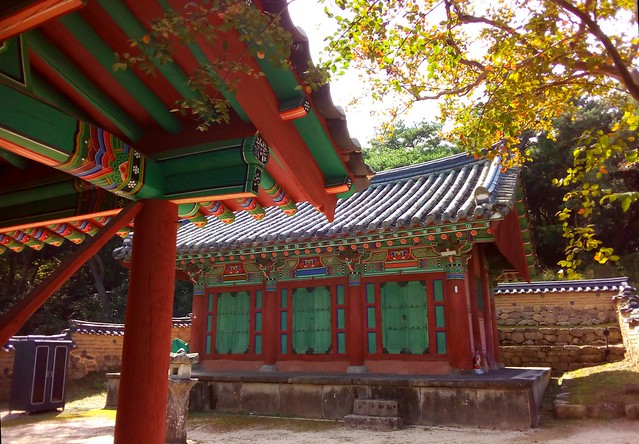 The bicycle path did live up to my high expectations.  Mostly it’s amazing infrastructure, but be warned if you’re expecting 100% off-highway riding, you may be disappointed.  We estimated that 10-15% of the Four Rivers path from Seoul to Busan was on roads shared with cars.  Another thing to note is that cars do not yield for bicycles or pedestrians.  Cars often do not stop at red lights even when pedestrians and cyclists are present and have a green light.  This is a problem in the US as well, but I’ve never seen it as common as in South Korea.  Even with that issue, I found the urban riding in both Seoul and Busan reasonable and sometimes fun. 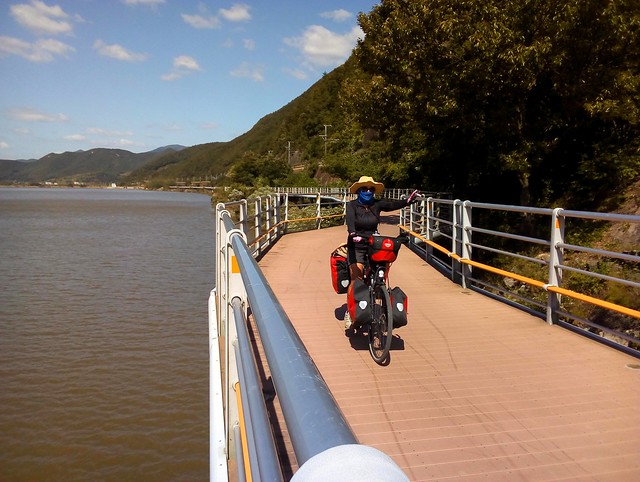 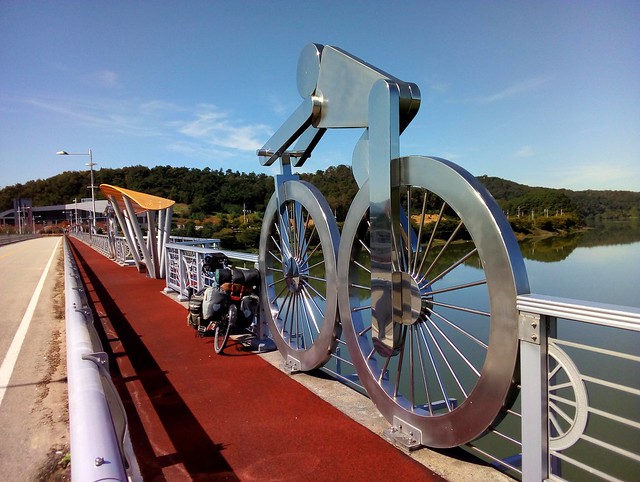 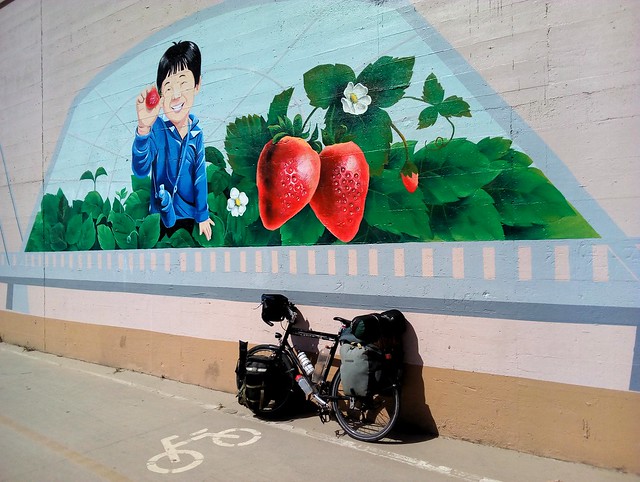 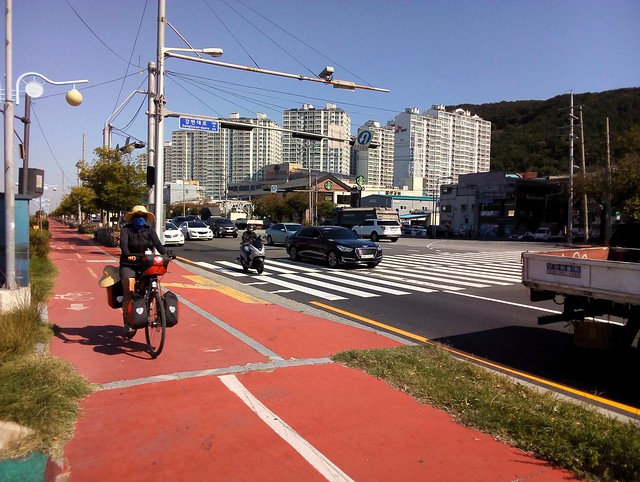 As an unusual souvenir you can buy a bicycle passport covering much of the Korean bicycle network.  Along the way are red booths where you stop and get another stamp in your passport. 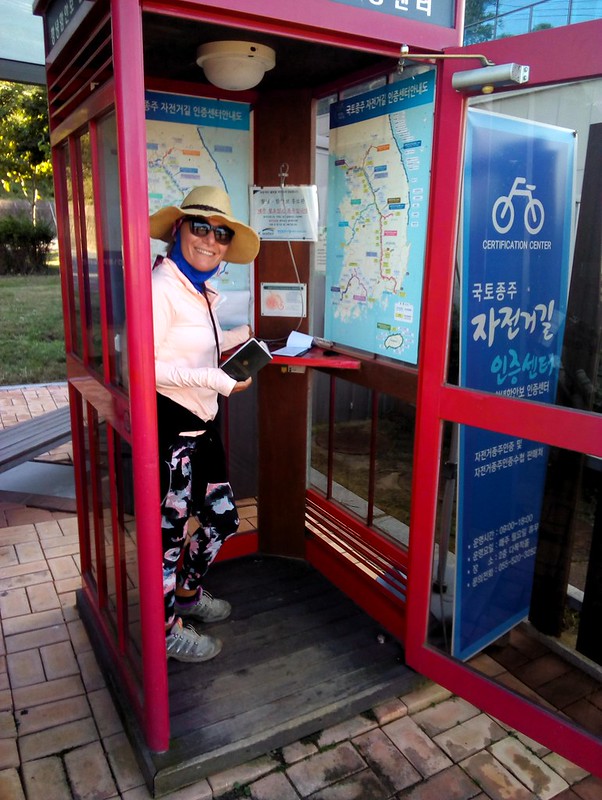 At the end (for us) of the Four Rivers path in Busan was a special station where Ferda showed her stamps and got a certificate showing that she’s now a “Korea cross-country cyclist”. 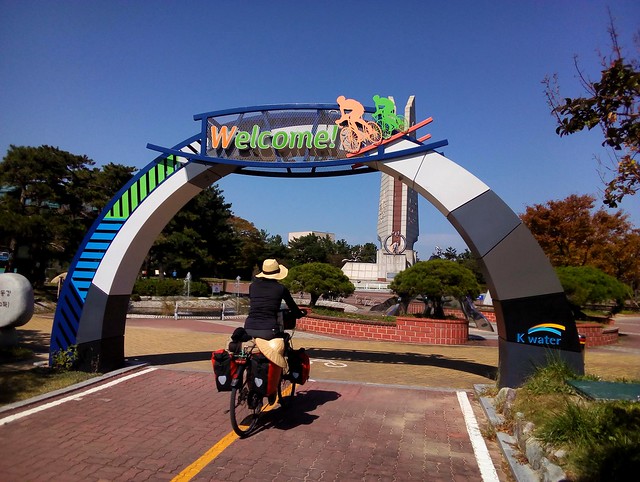 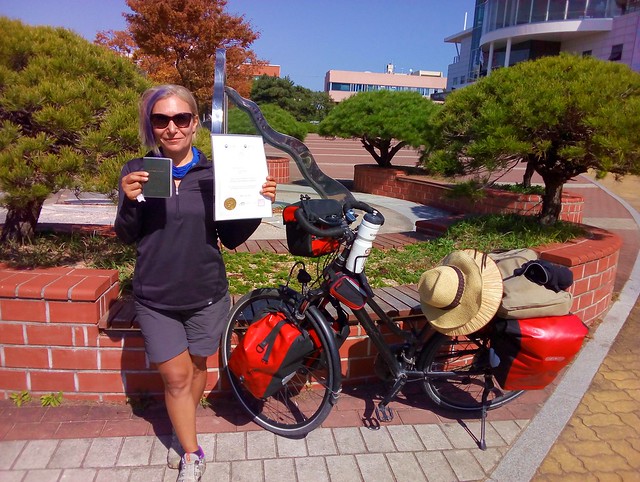 Before arriving in Korea we thought we’d often be able to find public bath houses called “jjimjilbang”.  In practice, however, these were very difficult to find, and it wasn’t till the end of the trip that we realized that perhaps that’s not the right word at all.  In Mulgeum we found something that definitely wasn’t jjimjilbang but was a great place to wash up at the end of the day, complete with a sauna and tubs for soaking.  If this is the kind of thing that interests you, try to learn the words before you go.

Camping was usually not hard to find, but the places can seem a little bizarre.  I think this one was a free public municipal campground: 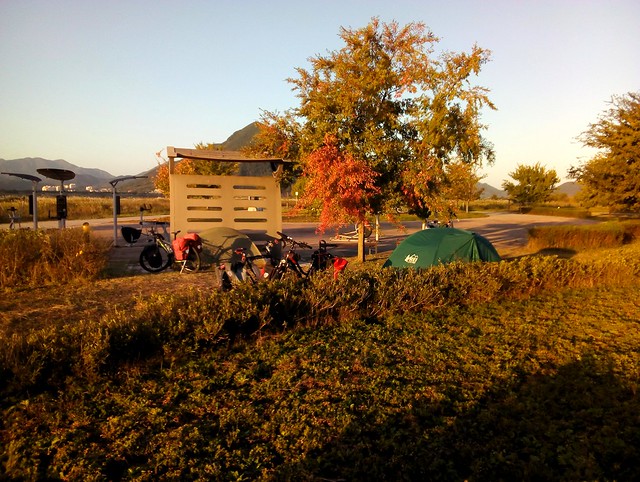 At this park, however, we were turned away from the campground (because we didn’t have a car?) so we just camped next to the beach volleyball court. 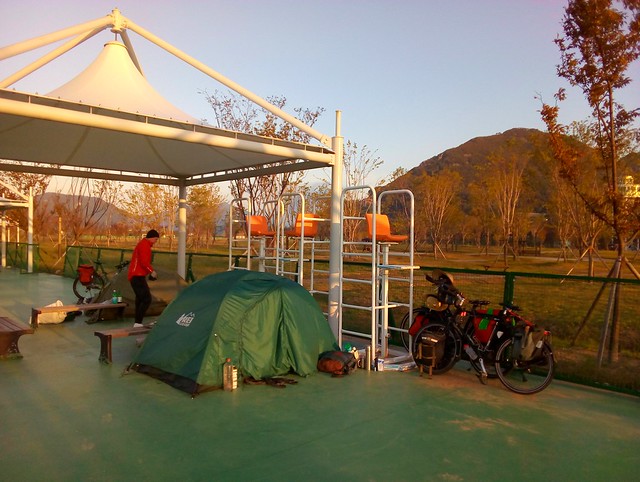 Mostly we just pitched our tents near the bicycle path like this: 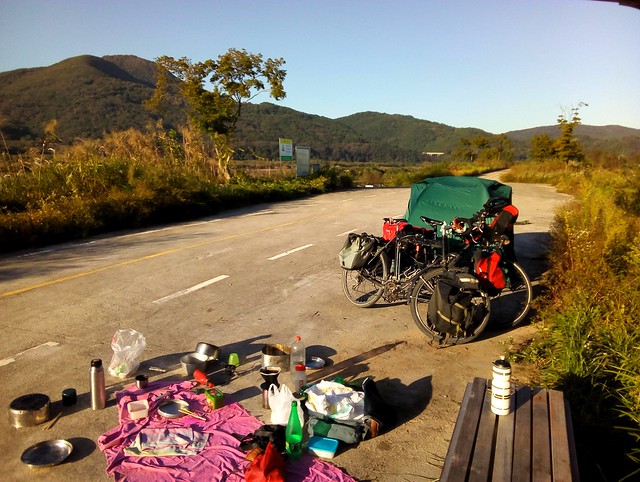 We never had a problem.

Another expectation I had was to see fall colors.  Turns out end of September to mid-October was mostly too early for colorful leaves this year.

In three weeks we saw lots of churches but only a couple Buddhist temples.  Is Korea really more Christian than Buddhist?  Religion does not seem to be an important part of life in Korea from what I was able to see. 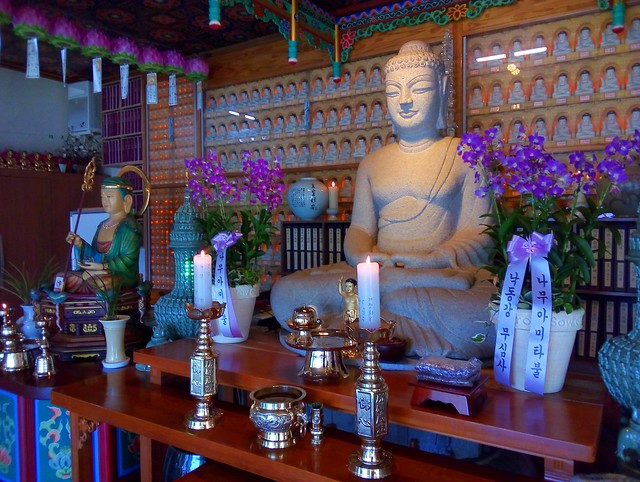 I really want to emphasize how highly I recommend a bicycle tour to South Korea for the food.  Almost every meal comes with an ever changing array of side dishes — pickled (fermented?) cabbage, fresh and pickled radishes, tiny anchovies with peanuts, raw garlic, hot green peppers, tiny salty shrimp, seaweed, perilla leaves — both fresh and pickled (these are super tasty), broccoli, tofu, onions, greens, squash, and many things that we couldn’t figure out what they were.  The list goes on and on.

Beef ribs at lunch one day: 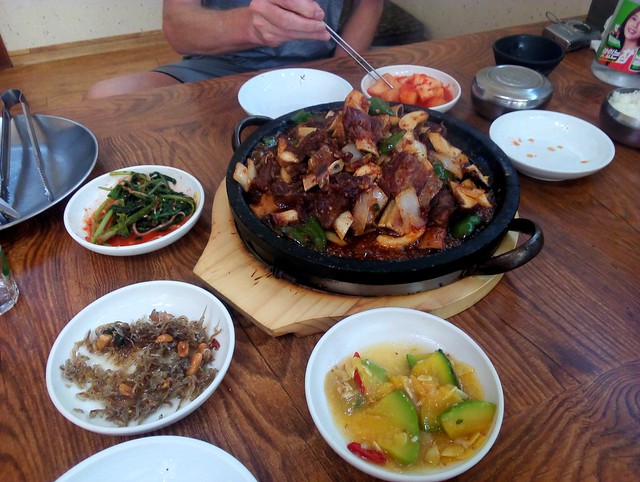 We had seen these hoods at a restaurant one day and were excited to try it once.  We cooked the pork right at the table (thankfully with help from the staff since we didn’t know what we were doing): 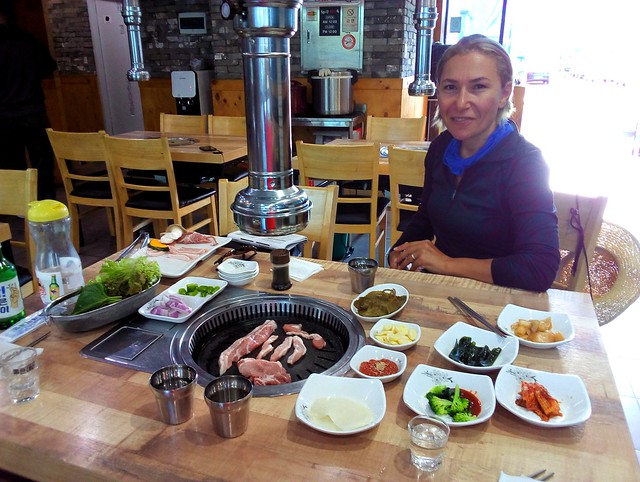 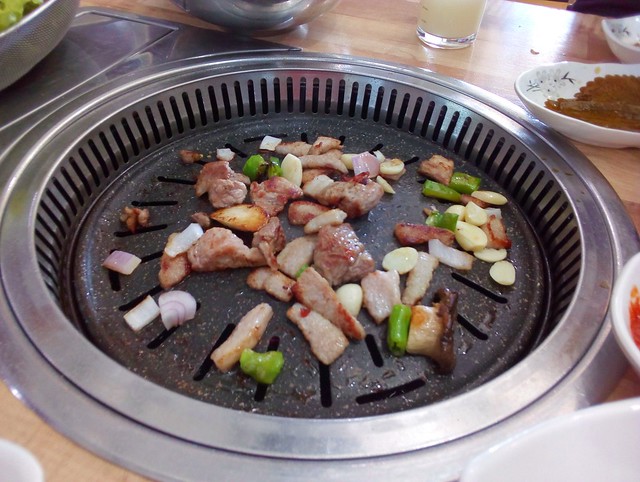 For Jack’s farewell dinner we happened upon Korean style sashimi in Busan. 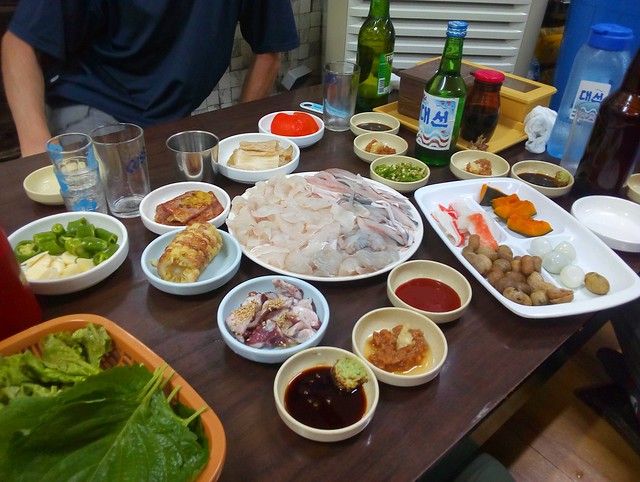 Jack’s now on the plane to Denver.  Next up for Ferda and me … Kyushu! 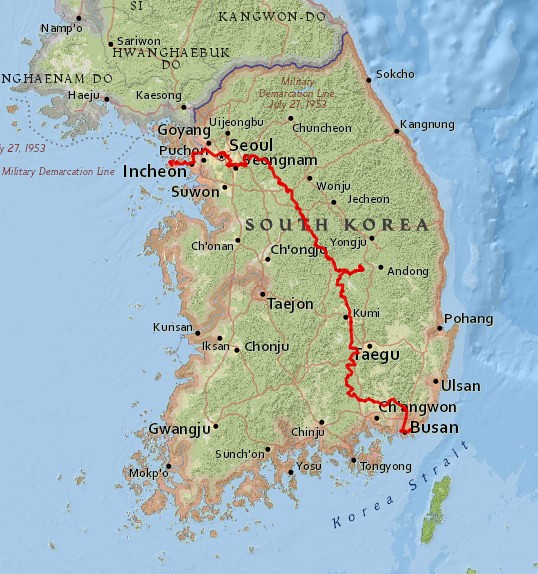