Saudi Arabia has huge plans for tourism.  According to an article in the January 2020 issue of DirectionsKSA (published in Riyadh), Saudi Arabia plans to be “among the top five tourist destinations in the world by 2030”.  They predict “the number of domestic and international tourists will reach about 100 million by 2030”.  I’m guessing that includes Umrah and Haj visitors as well, but still it seems wildly optimistic.

If you read anything about where to visit in the Kingdom, well, the area around Al Ula, including the Nabatean site of Madain Saleh, is often the first place mentioned.  Oddly for their first winter with the country open to tourism, the sites there were mostly closed this year for a big tourism development project.  That’s why I didn’t go.

The second place on these lists is mountainous Aseer Province in SW Saudi Arabia, bordering Yemen.  I have some photos of the steep mountains and the schist architecture in my last post.  The crown jewel of Aseer is perhaps Rijal Almaa.

During my rest day with Hassan at his house in Sumeri, Hassan’s brother-in-law, Hasan Ali, wanted to take me by car to Rijal Almaa.  No, thank you, I said, I’ll be arriving by bicycle in a couple days.  He insisted.  It is, I suppose, the only reason anyone comes to this area.  It’s not hard to see why. 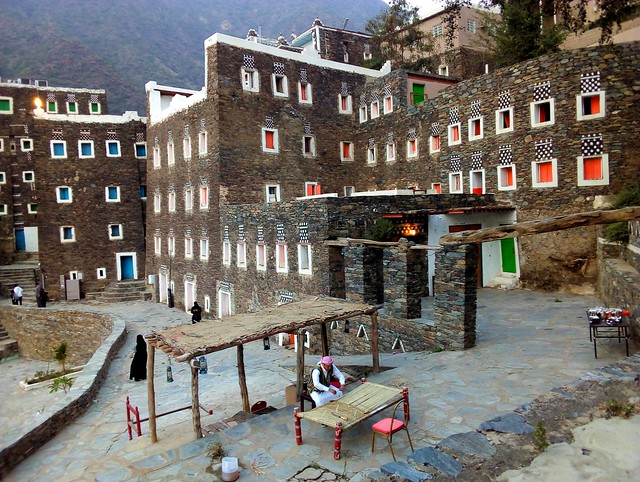 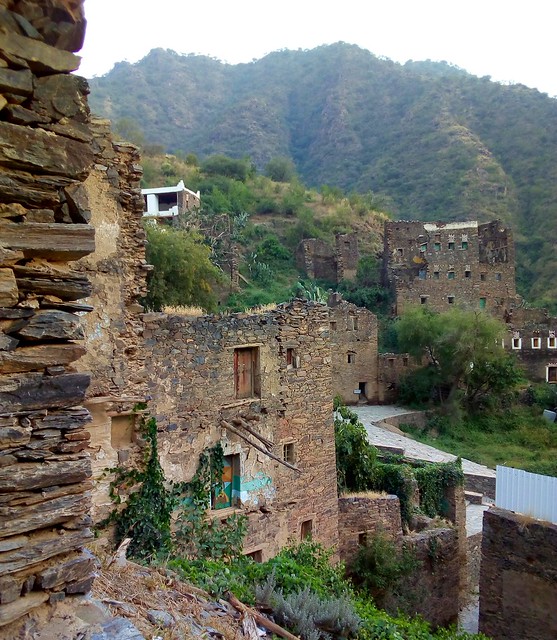 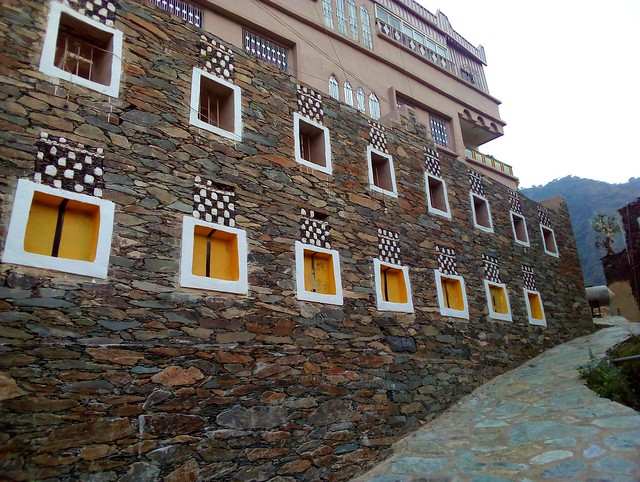 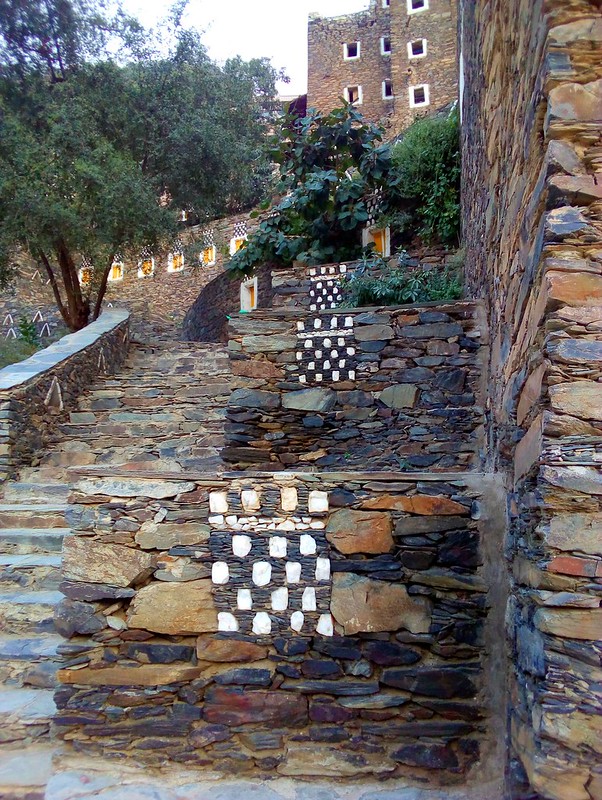 Hasan had driven me there and back on the main busy road from Sumeri (and Muhayil).  When I left Sumeri by bicycle, I took a longer and less busy road around via Al Batilah (and an extra pass).  It was a good route with lots of my beloved schist buildings.  Two days later I was in Rijal Almaa again, this time with my bicycle. 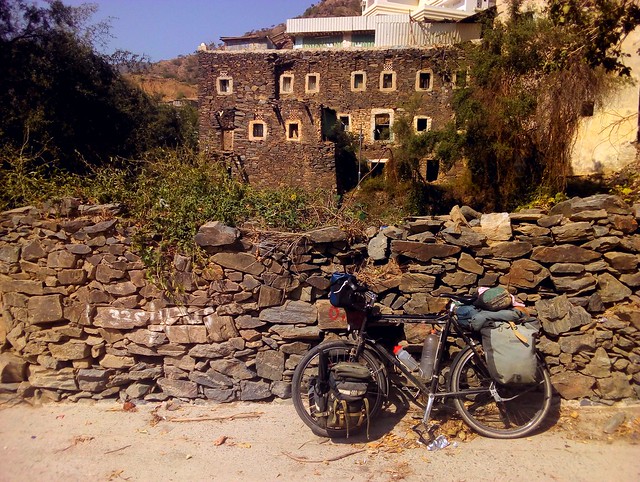 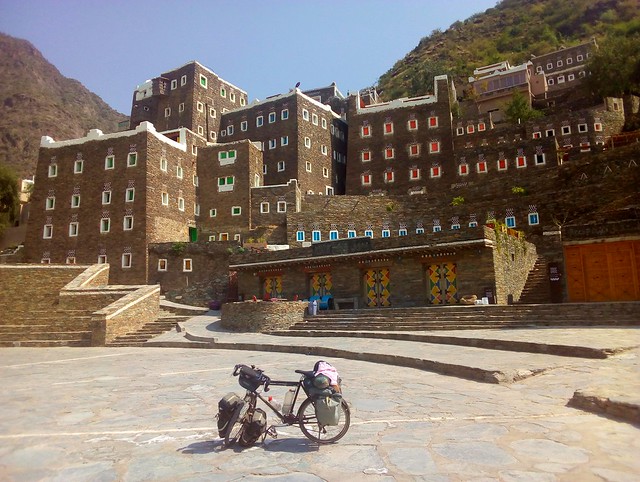 It looks much better with a bicycle, doesn’t it?  😉

Here’s the entrance to the museum (up the green steps): 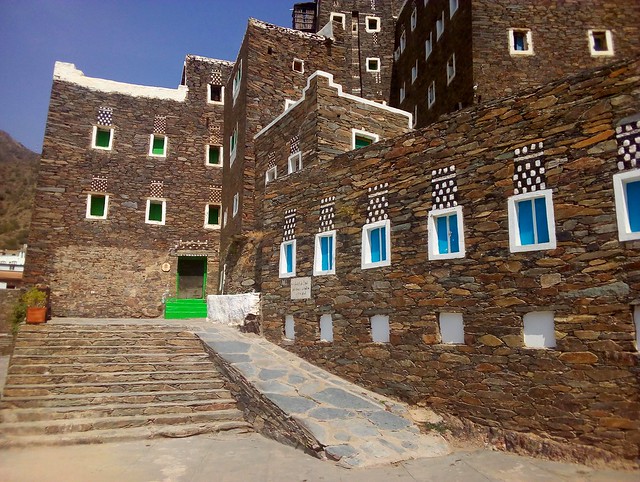 Throughout Aseer I had seen many modern examples of Aseer’s colorful geometric wall painting, an art form called Al Qatt, recognized by UNESCO as an Intangible Cultural Heritage of Humanity. 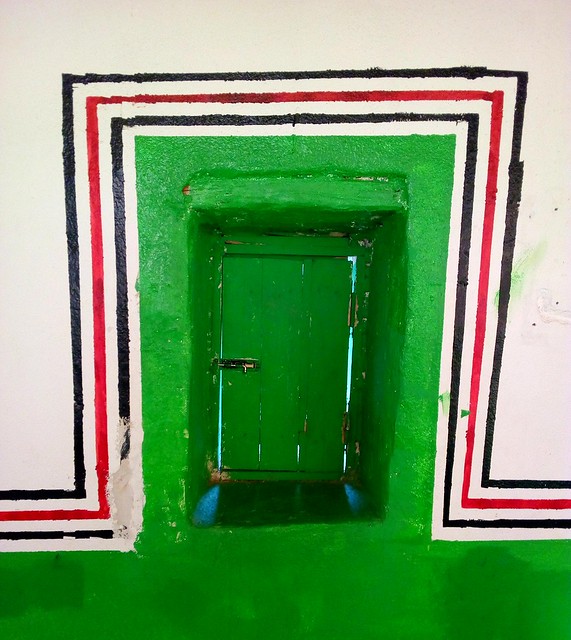 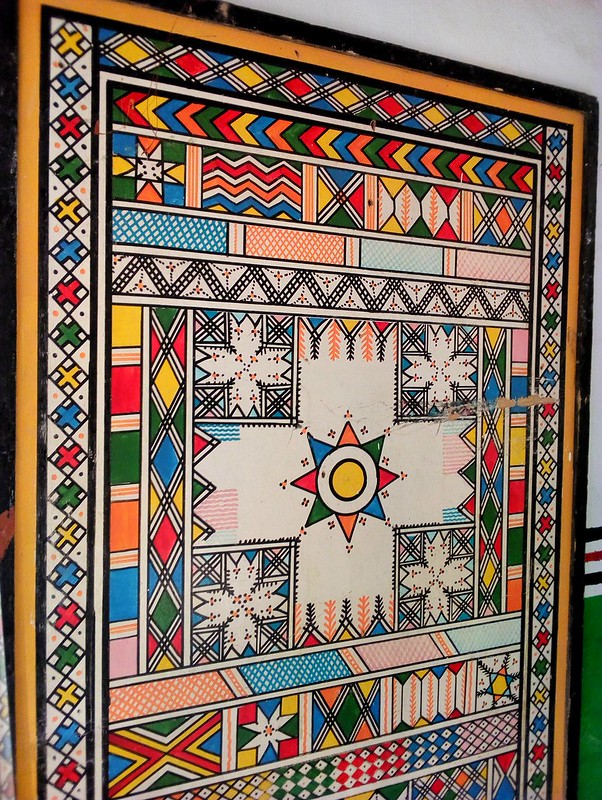 The museum preserves some older examples: 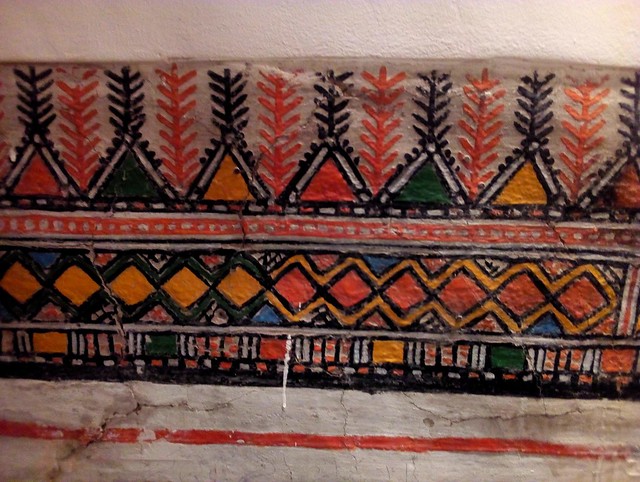 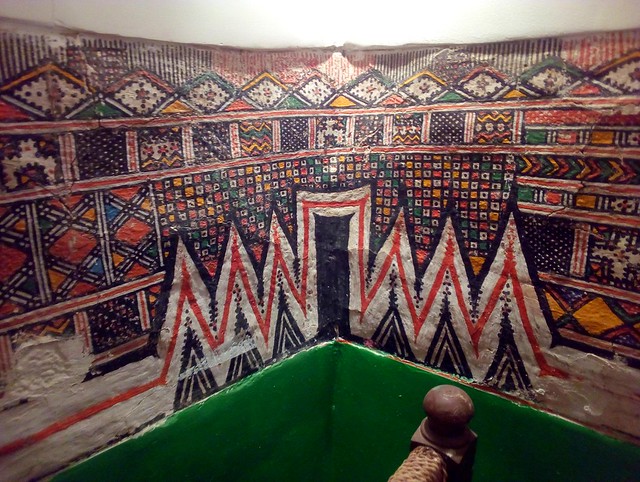 It took me a couple more days of mountainous riding to reach Abha, Aseer’s provincial capital.  Again I avoided the crowded main highway by taking the (very hilly) route via Hesua and Raidah Sanctuary.

At the end of my Saudi trip I had planned on spending an evening in Riyadh with my friends, Jennie and Derek, who were also on their first tour of Saudi Arabia.  Unfortunately schedules changed, and we weren’t going to overlap in Riyadh after all.  We stayed in contact, and it turned out that, on my rest day in Abha, Jennie and Derek were passing through the city on their way to Rijal Almaa.  Their guide, Khalid, kindly invited me to join them.  That’s how I ended up back in Rijal Almaa for the third time (and by yet a different route)!

Here we are at the Aljehl Archaeological Museum in Arhwah: 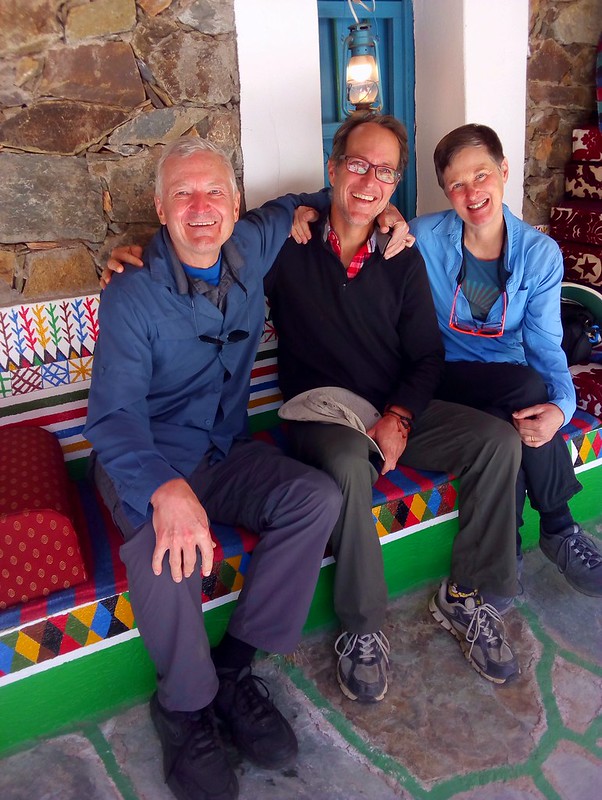 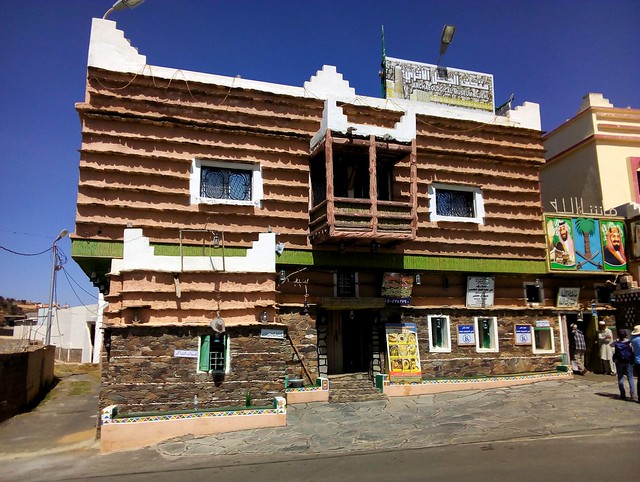 And back in Rijal Almaa: 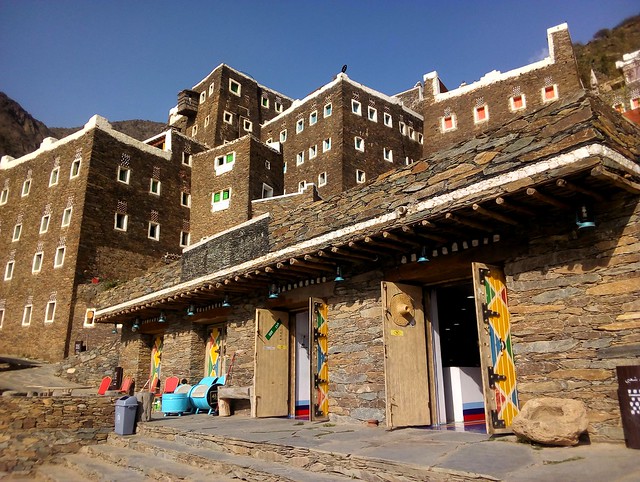 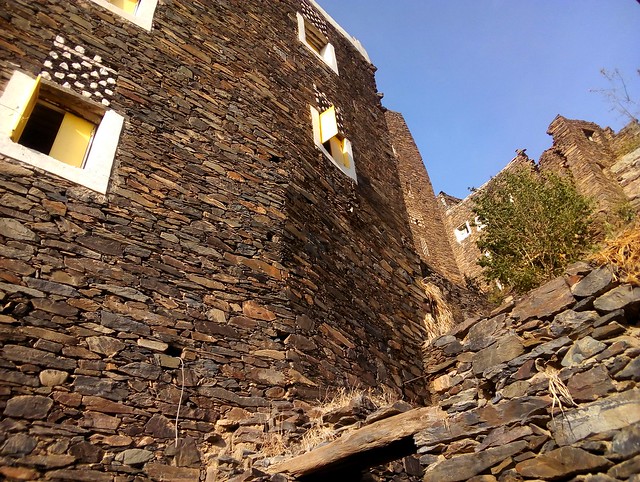 Khalid explained to us that, in the Aseer tradition, men build the houses with occasional artistic flare over the windows and doors while the women work inside, developing the Al Qatt art form. 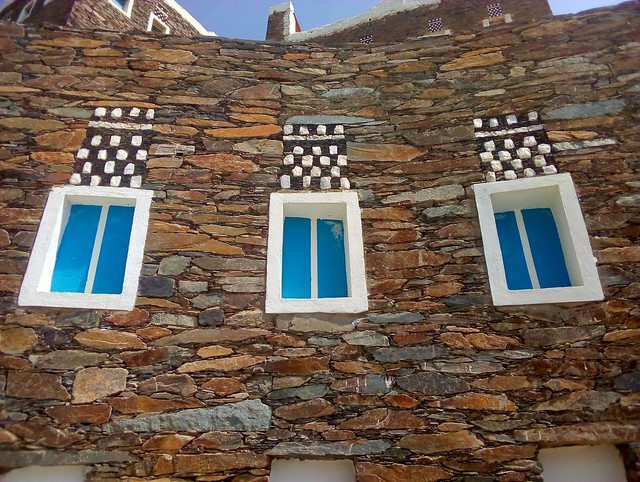 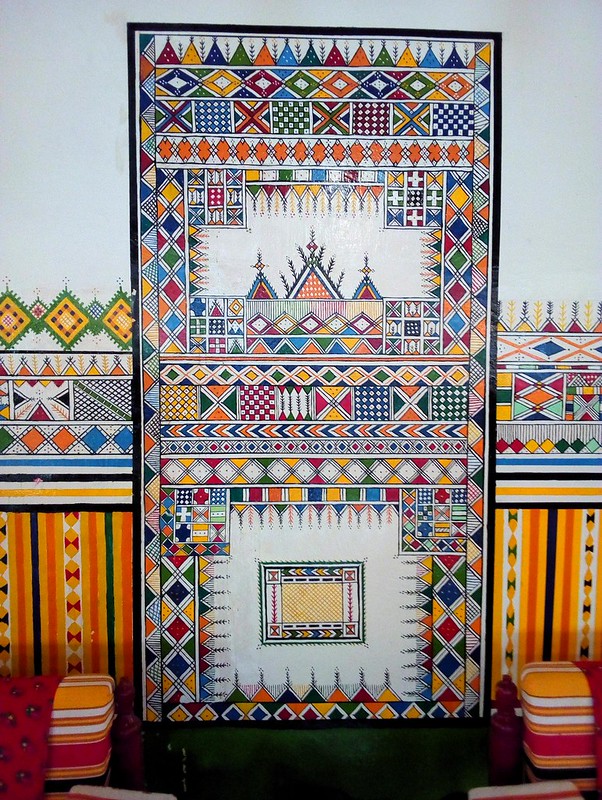 Rijal Almaa is certainly a must-see destination if you’re in Aseer, but be warned, that, unlike Portugal’s Schist Villages, historic Rijal Almaa is a museum, not a village.  There are no more people living in the historic part of town.