I feel like the last time I wrote all I could do was gush enthusiastically about Romania as I ran out of superlatives.  This has to stop, really.  Then after crossing the beautiful rolling hills of Transylvania, I arrived in Sighişoara.  I ought to have a whole blog babbling on about this charming town, and I ought to have enough photos for an entire album.  I can see why someone might come to Romania just to visit Sighişoara. 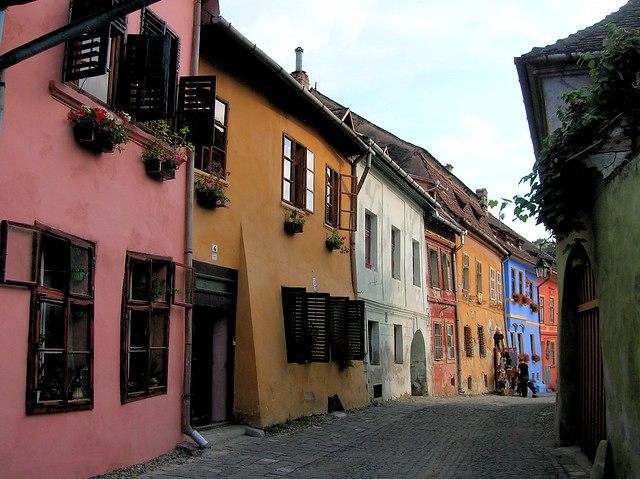 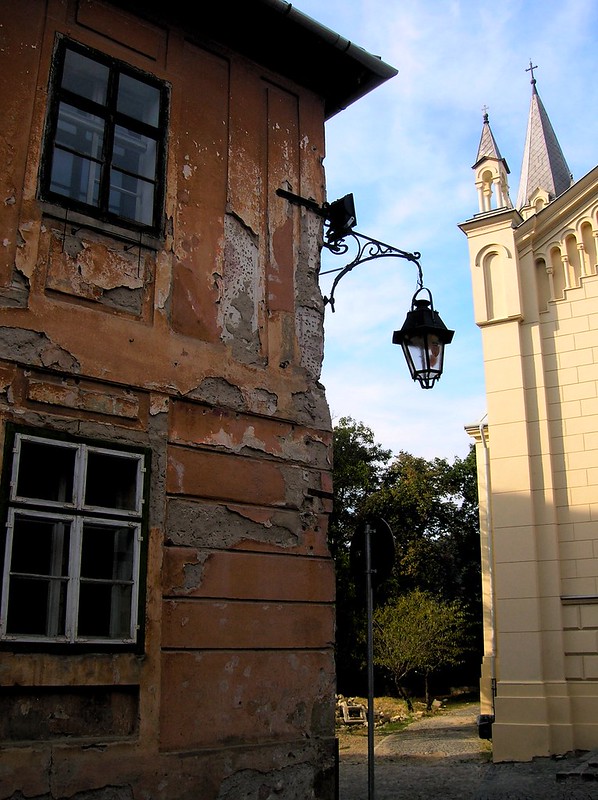 Ouro Preto, Chichicastenango, Trinidad (Cuba) — all charming towns that tourists have discovered.  Sighişoara was a step above.  The walled center of the city, built on a hill, is the attraction.  The winding cobblestone streets are lined with colorful houses — some falling down, others in fine shape, many with historical designation.  As I rounded every corner, I wanted to take another photo.  Sure, tourists have discovered Sighişoara, but I was surprised not to see more tourists.  Locals still live in the center.  I listened to a grandmother sing to her granddaughter as they walked home. 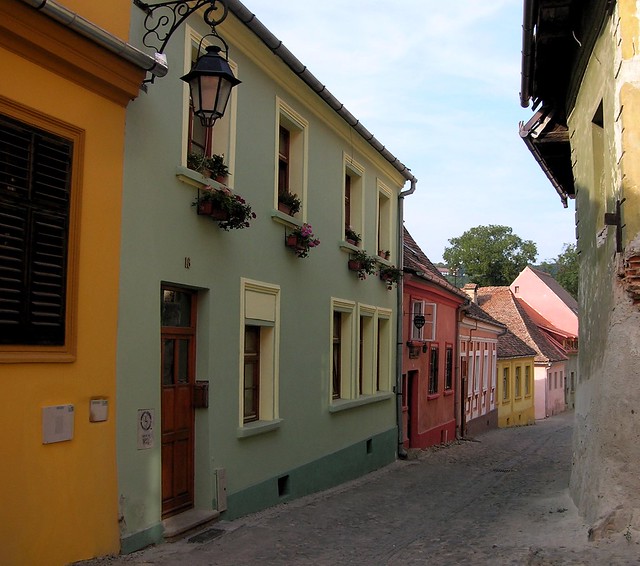 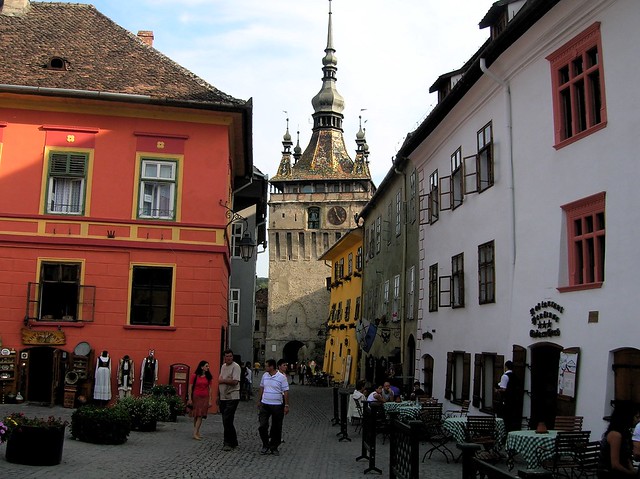 In Sighişoara we met the most enthusiastic bicycle tourer, a single Polish woman.  She was so sad to be at the end of her ~two month trip. 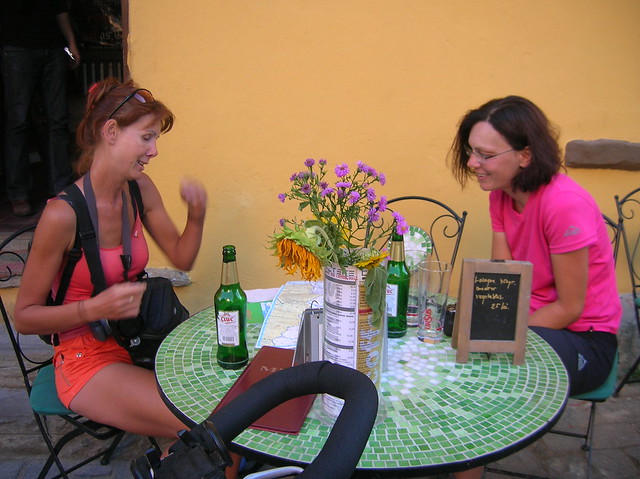 Some tourists may come to Romania for Sighişoara, but it was photos of the Transfăgărăşan Highway that first got me thinking about a bicycle tour in the Carpathians.  Trolling the web for mountain passes to pedal, I came across fantastic photos of the switchbacks of the Transfăgărăşan and knew I wanted to ride it.  Even with such high expectations, I was not disappointed.  Even after seeing so much overwhelming scenery in Romania (Bicaz Gorge, the mountains above Bran, Sicaş Pass, the pass south of Ostra in the Munţii Stânişoarei), Transfăgărăşan awed me. 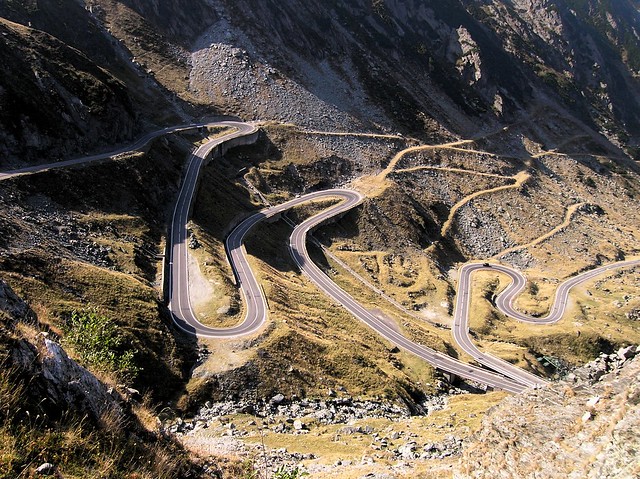 It really does take someone crazy (Ceaușescu) to think it’s reasonable to build a road through there.  I guess a healthy fear of the Soviets helped as well.  The climb was a hard 25 km.  The highlight is the last 10 km where it’s above treeline and the switchbacks start for real.  The road climbs into a craggy alpine cirque.  There’s no place for a pass at all, and what’s amazing is that the tunnel to get to the other side is only about a km long.  There’s still hundreds of meters of steep rock above. 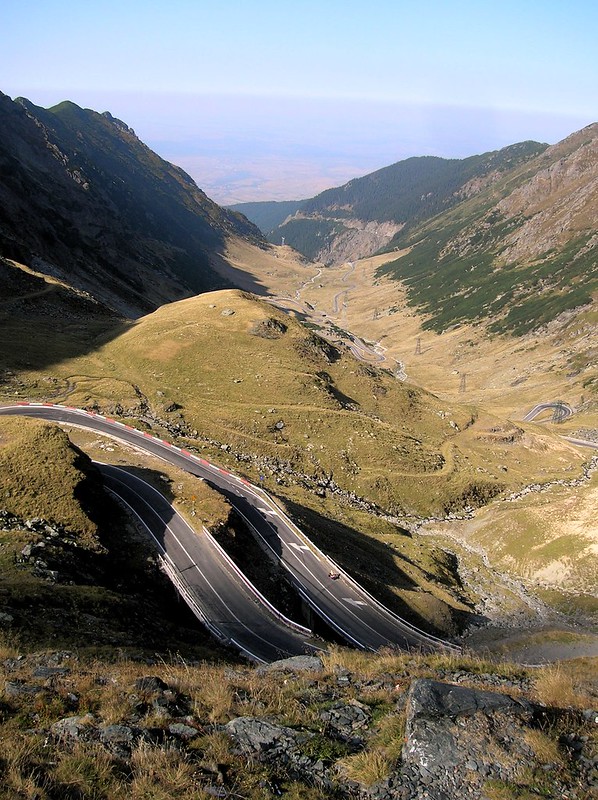 At the top of the climb we met our most enthusiastic fan, a single Polish woman, future bicycle tourer.  She was so excited for us and our trip and couldn’t wait to do a bicycle tour of her own.

Well, I don’t have a photo of her, but here’s a photo of a farmer with a headless chicken shortly after I purchased it for dinner: 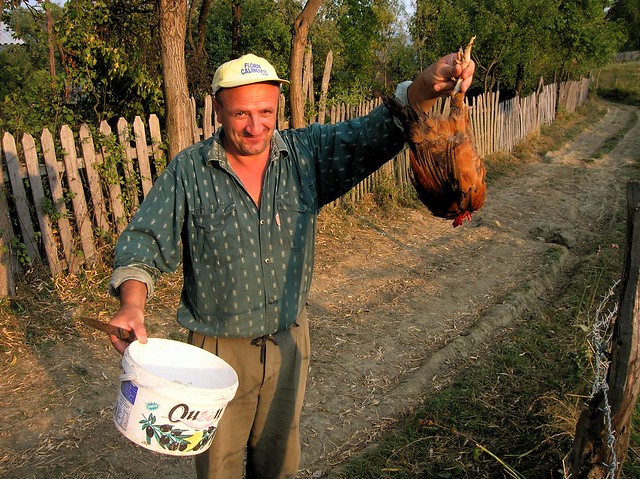 If I had two roads on my “must-ride” list for Romania, one was Transfăgărăşan and the second was Urdele Pass, the highest drivable pass that I know of in the Carpathians.  From the south side, it’s a 1700m climb — one of the big ones!  The first 15km climbed about 1100m.  Yikes!  Then there was a break through Rânca, an under-construction resort disaster, the ugliest town I’ve seen in Romania.  With unmanaged development and horrid architecture, that won’t change soon.  Urdele Pass is only recently paved (and now called Transalpina), and I saw the result.  Watch out, Guanella Pass!  Should have been here five years ago. 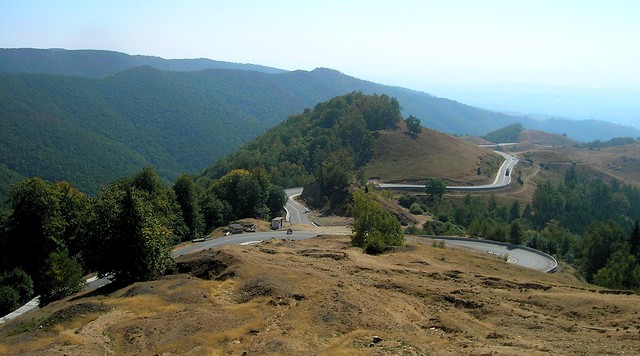 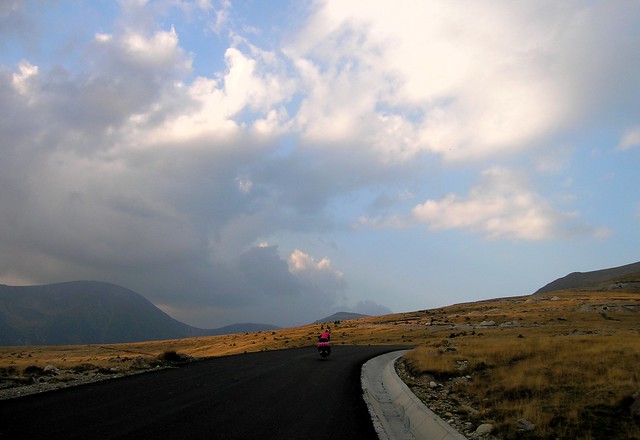 Oh, it would have been an effort without the pavement.  As it was, we were able to spin and enjoy the alpine views.  Stunning mountains and a ridiculous place to put a road.  Ceaușescu might not be the only crazy one after all.  Blame the Romans? 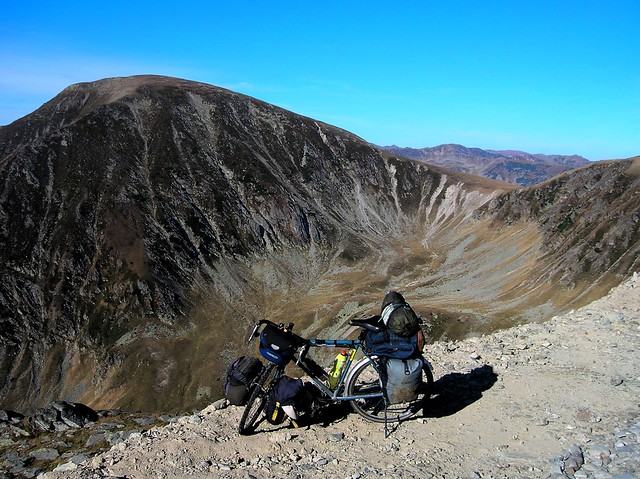 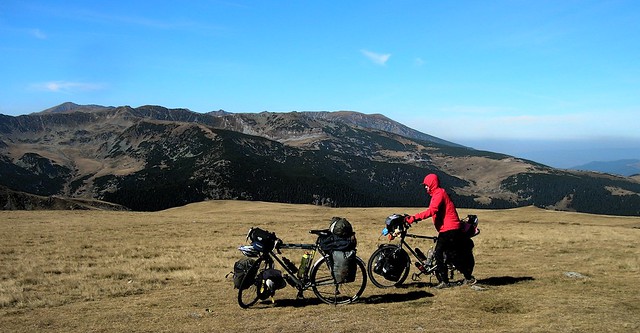 Just like the Transfăgărăşan descent, the Transalpina descent was a bit of a bummer because of all the construction.  At times it felt like an industrial disaster.  However, lower down below Tău I pedaled through a fantastic valley with the best fall colors I’ve ever seen.  I had seen photos of stuff like this.  Appalachia?  The Gunks?  Romania, a surprise around every corner, and they’re usually great. 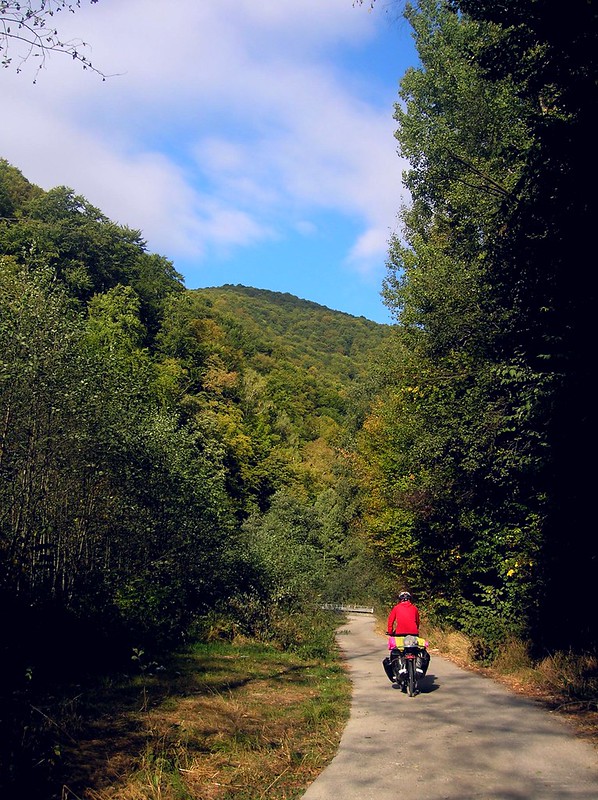 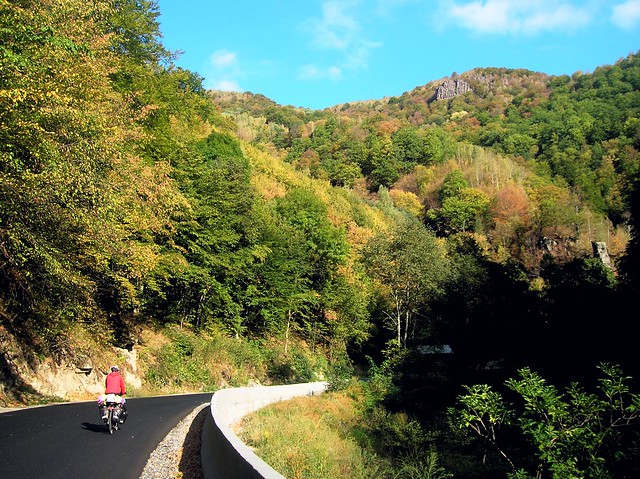 But wait!  That’s not all the mountain eye candy.  In order to connect the Transfăgărăşan and the Transalpina, we choose the route that wasn’t even on my map.  Even with the internet I still can’t find the name of the pass between Cieutegu and Polovragi.  It passed through two steep, narrow gorges and followed a dirt road that felt like the most remote area I’ve visited in Romania. 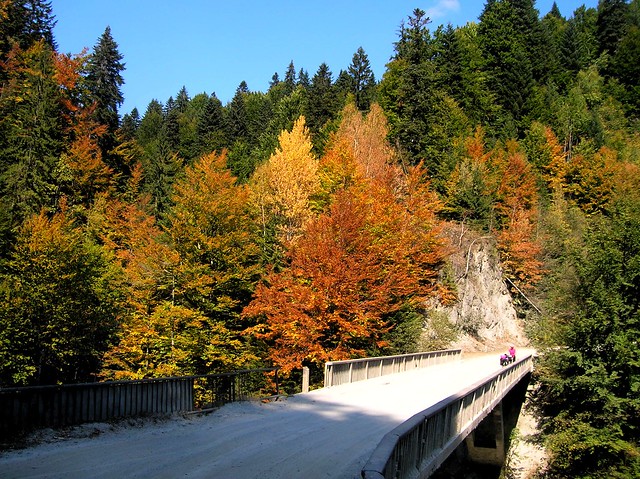 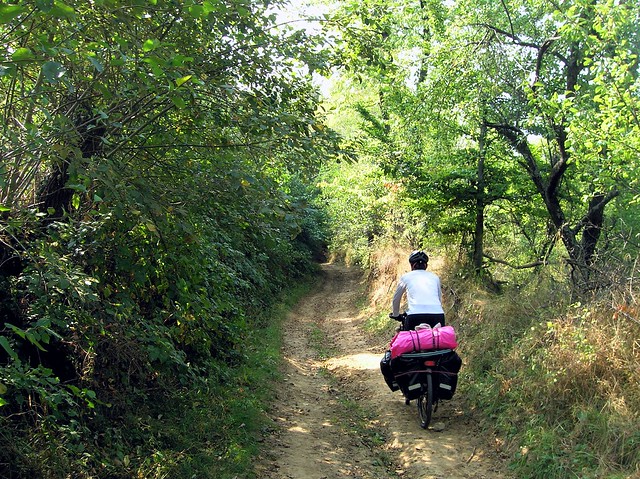 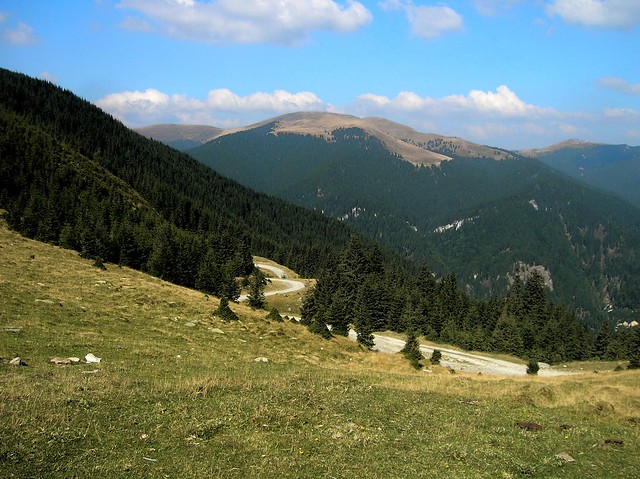 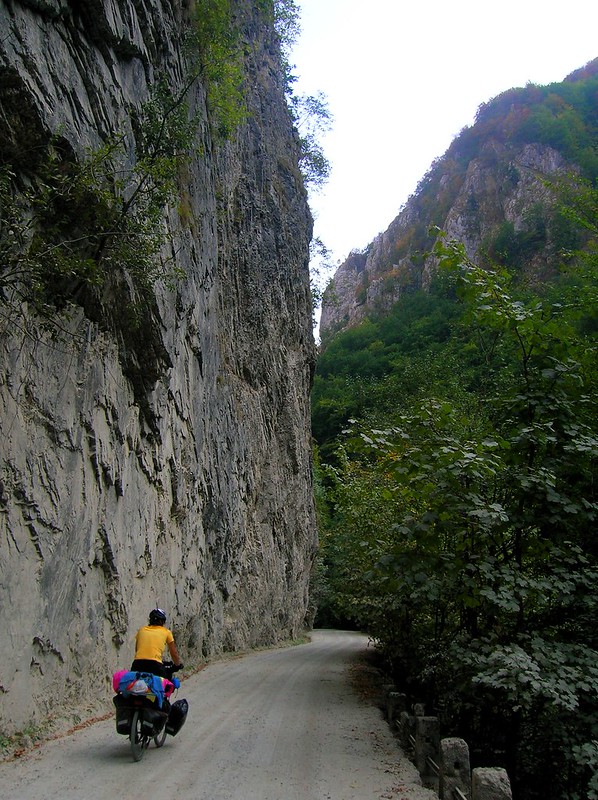 4 Responses to The highest Carpathians