A short loop SW of Antalya

My first pass through Antalya with Kurt was a quick and busy one.  Since he was on a short (one-month) tour, Kurt was ready to leave after two nights.  I could have easily stayed twice that long.  I was tired from our fairly fast, somewhat challenging ride from Mumcular, and our 48 hour “rest” in Antalya wasn’t restful for me.  On my first evening in the city Snežana and I had a difficult, emotional meeting where we decided (for sure this time?) that we won’t be traveling together anymore.

I spent much of the next day running around interviewing potential language schools.  The one I had had the most communication with seemed rather flaky so I’m glad I looked further.  I’m liking my teacher, the area of the city where I’m staying, and the family I’m living with, but, wait, I’m getting ahead of myself.

Just like the meteorologists forecasted, it was pissing down rain the day Kurt and I had planned to leave Antalya.  We waited till the afternoon and pedaled away with the sky looking like this: 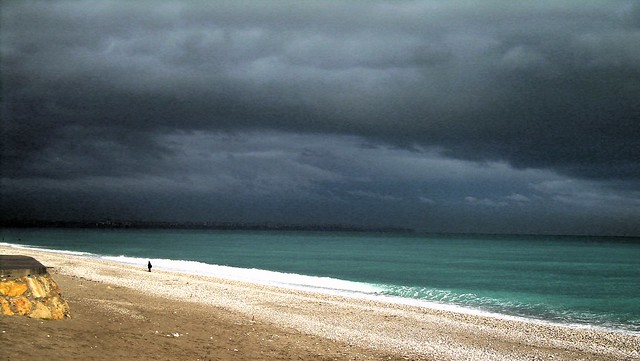 We had barely left the city when we were in an area of orange orchards surrounded by steep dramatic mountains.  Some farmers put us up in their barn that night which was colder and wetter than the aforementioned experts expected. 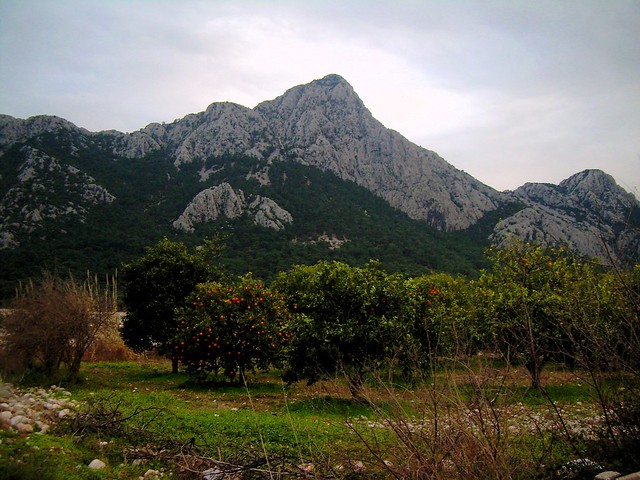 At least the following morning would dawn clear and warm, right?  Well, not so clear and certainly not warm.  There was new snow on said nearby dramatic mountains.  It was still February after all. 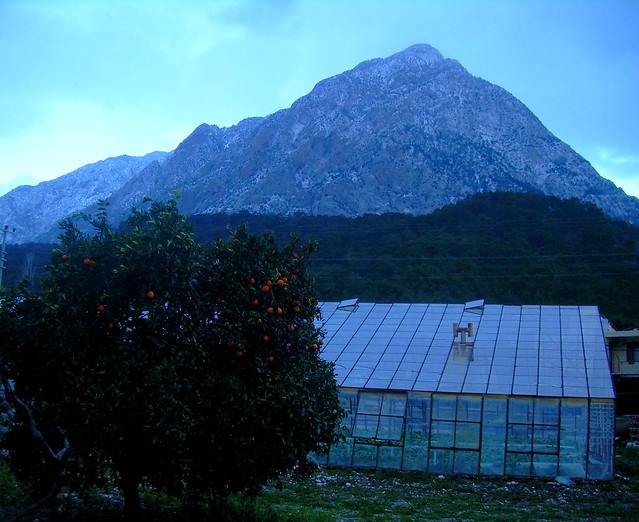 The farmers, warning us of snow, closed roads, and failed bridges, put the kibosh on Plan A which was to head up the Çandır River canyon toward of the village of Yorbaşçandır.  A few hours later and the wind thwarted Plan B.  We climbed about 400 m (in 10 km) up the smallish Altınyaka highway, but the wind got so bad the gusts were blowing us all over the road.  Snow was streaming off the surrounding mountains. 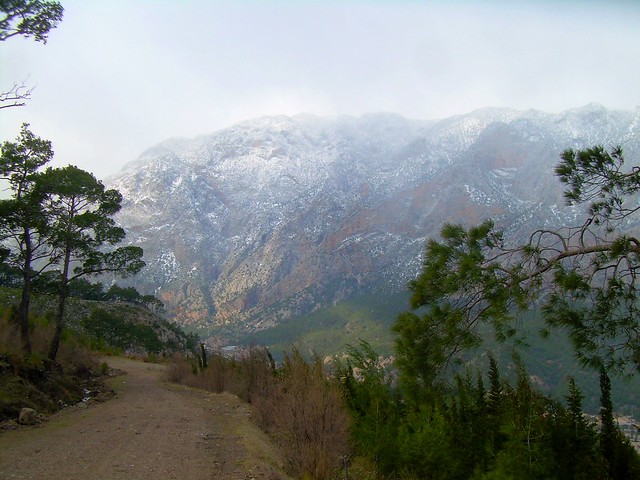 This photo, taken shortly after our decision to turn around, looks like it could have been taken on a pleasant riding day.  It wasn’t. 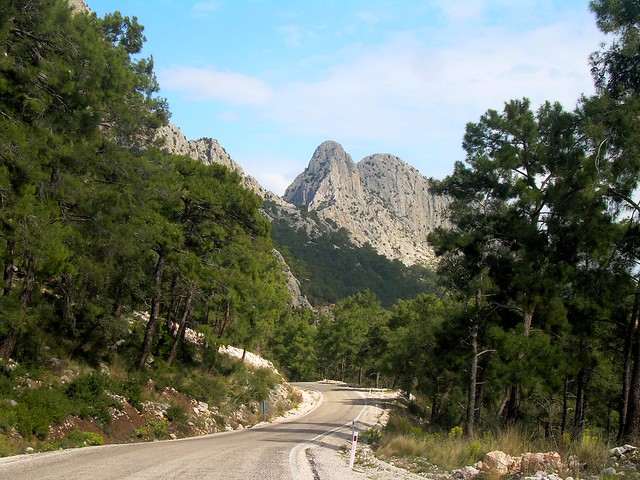 On to Plan C, the big, nasty highway on the coast.  We rode back down to the western edge of Antalya, found a place out of the wind for lunch, and started toward Kemer.  The wind was still howling down there, a rather dangerous situation with so much fast traffic.  There were a few longish (~1 km), wind-free tunnels which Kurt pointed out was the best riding of the day.  Uh, yeah, not a day to be riding.  Before long we found an official (state?) campground (3 TL each) with friendly employees, fixed a well-deserved dinner, and hoped for a sunny, warm, calm morning.  It was now March after all. 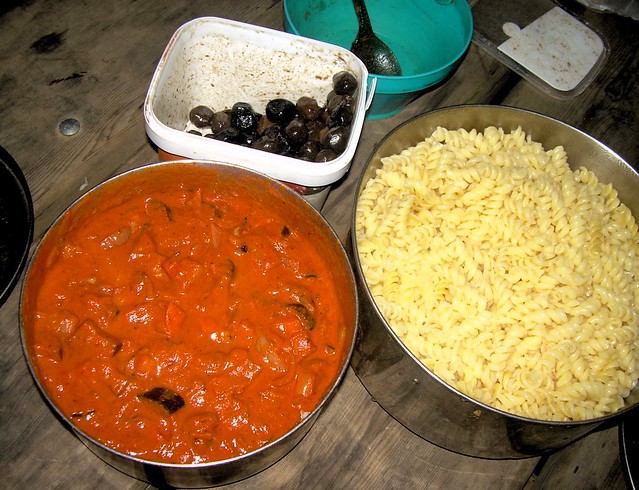 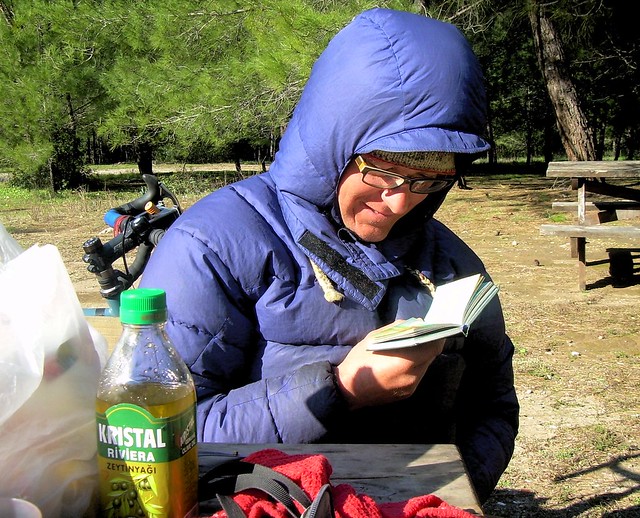 The rest of our tour ended up having some quite spectacular riding though it was hardly what one would call warm.  We continued along the coast to Kemer largely on the smaller road though the Russian tourist towns of Belbidi and Göynük.  Kemer has a spectacular setting on the Mediterranean.  This whole coastal area is part of the famous Turkish Riviera and has more fantastic scenery (and similar endless tourist development) than the French, Mexican, or Mayan rivieras. 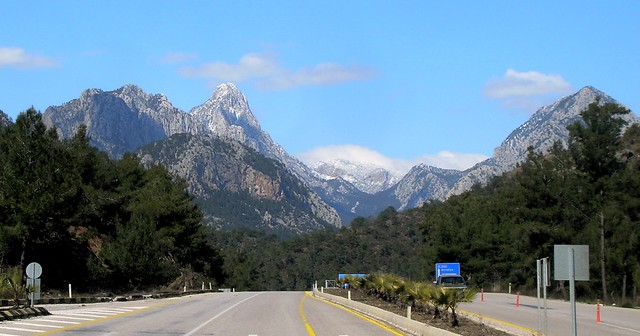 From Kemer we headed up.  Up and up and up in search of the snow that the farmers were talking about.  It wasn’t hard to find.  Those two days of riding from Kemer to Antalya were some of the most amazing scenery of my entire trip.  I’ll have to let the photos do the talking as I’m out of superlatives.  What a way for Kurt and me to end our time together in Turkey. 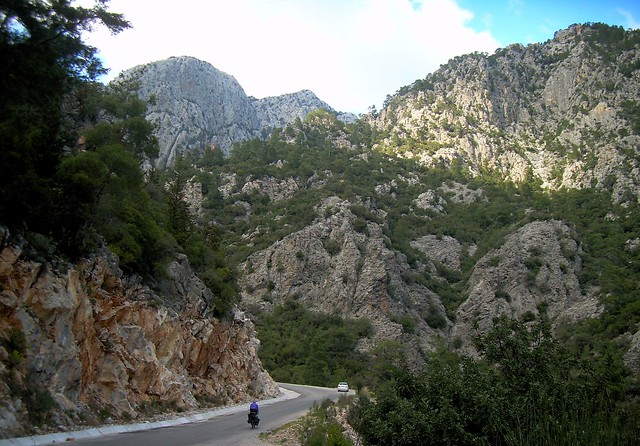 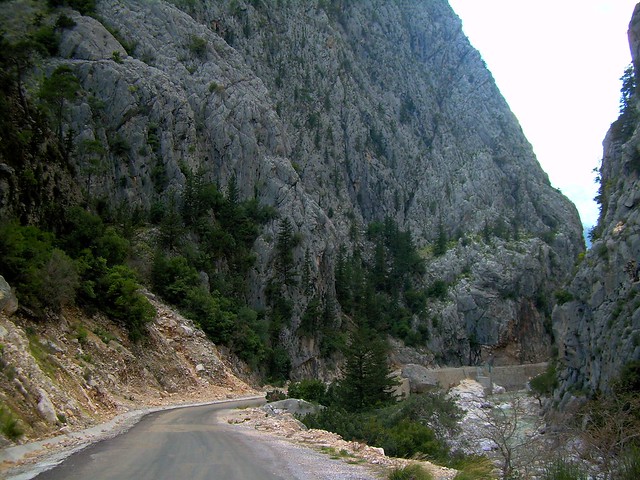 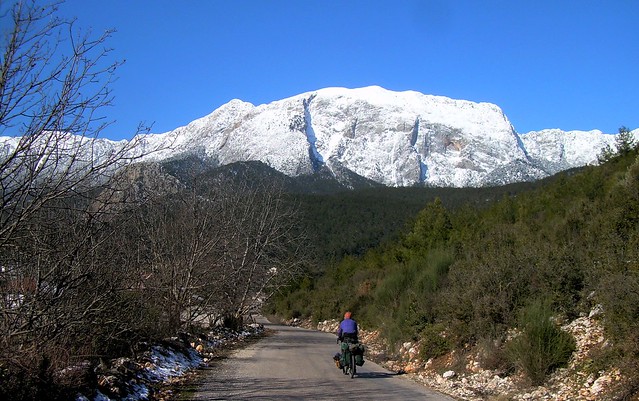 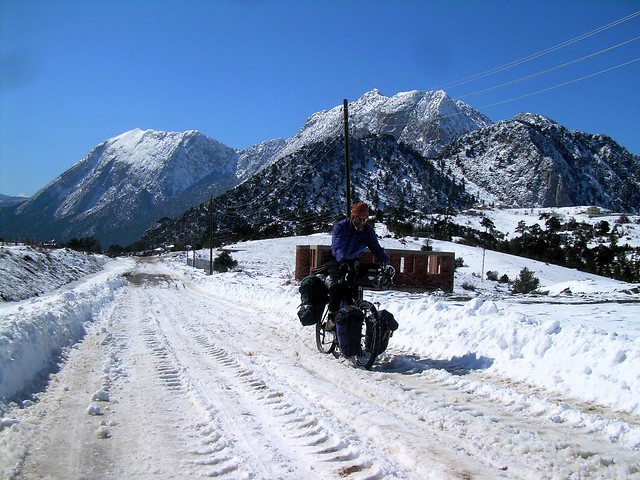 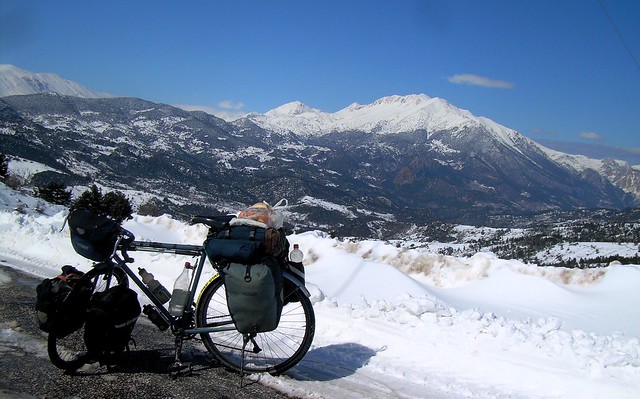 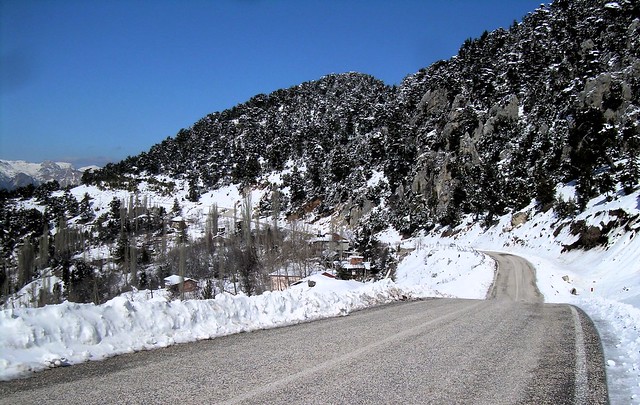 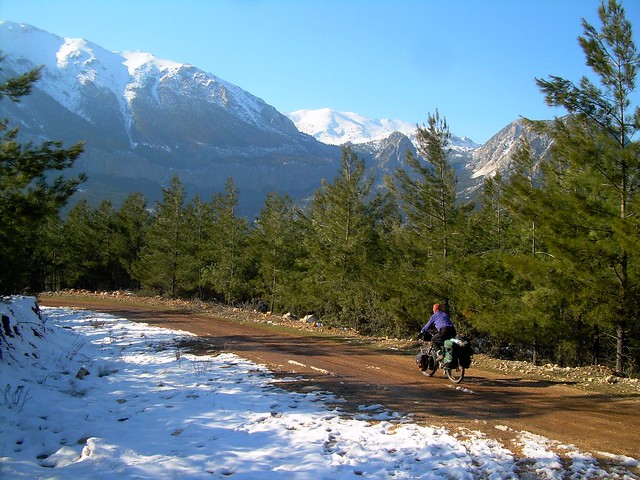 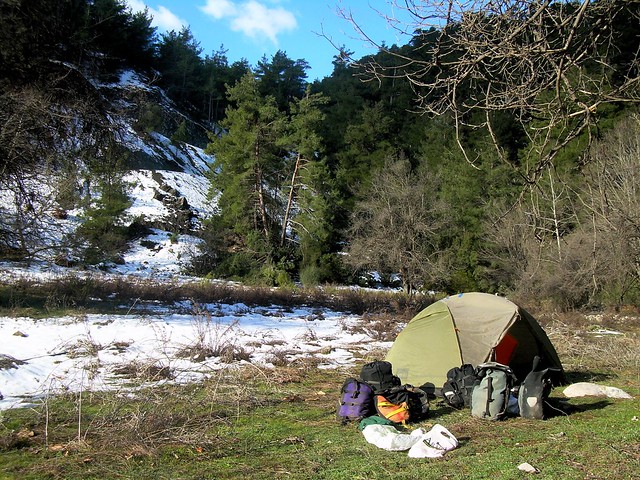 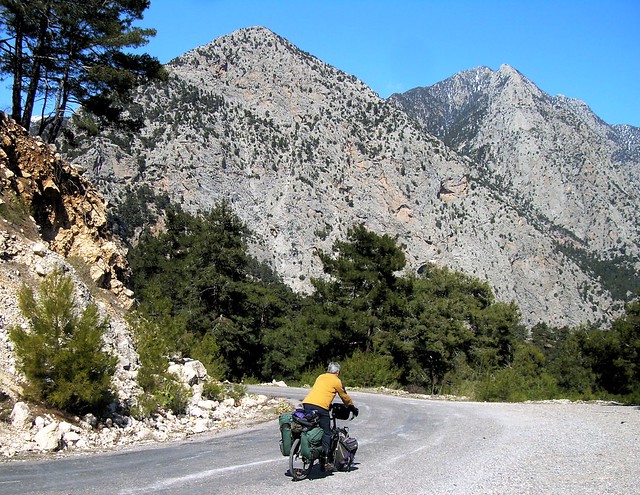 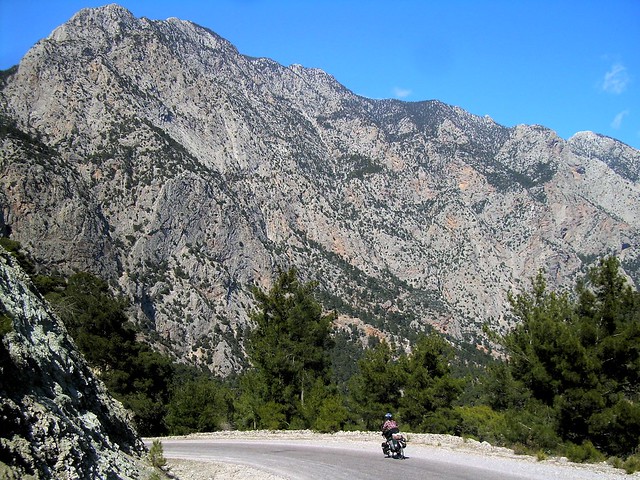 1 Response to A short loop SW of Antalya