I’m honored to be chosen as this week’s guest blogger. Rather than specifics of our route or experiences, I’ll talk here about the big themes of my month-long shared slice of Bryan’s adventure.

The Turks we met were almost universally friendly, welcoming, curious, and eager to talk. This didn’t surprise me a lot, based on reports from other travelers to Turkey, and on the cultural history in the region of generosity to guests that stretches back at least to Homer’s time. The tea and food we were given came from the heart every bit as much as the silver bowls Odysseus collected on his travels, and they were a good deal more practical for bike tourists. Lots of people wanted to talk about American politics — there’s no doubt that esteem for the US has risen since the 2008 presidential election. They didn’t want to talk so much about Turkish politics, at least in the southwest, said to be the most liberal and Westernized part of Turkey.

The one disappointment was that because of residual, de facto gender segregation, we talked mostly with men. It was discouraging to get surrounded by a throng of curious villagers and see that every last one of them was male, or to see not a single woman in a crowded teahouse. It also got a little old for me to always be a spectacle, at least outside the big cities. From their perspective we were a novelty, in villages where there hadn’t been much novelty since the domestication of chickens. Still, I got tired of it. 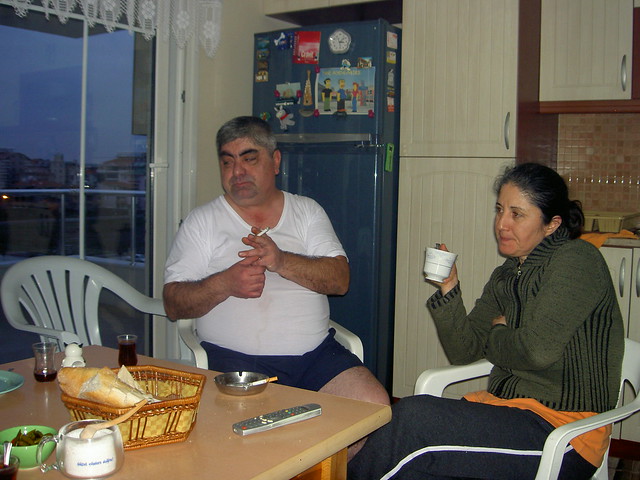 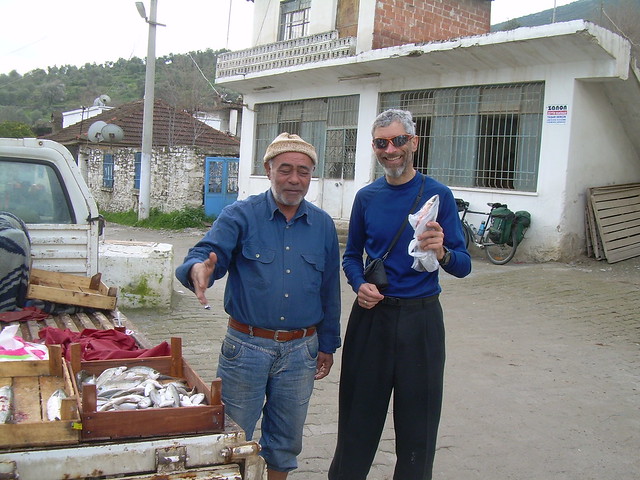 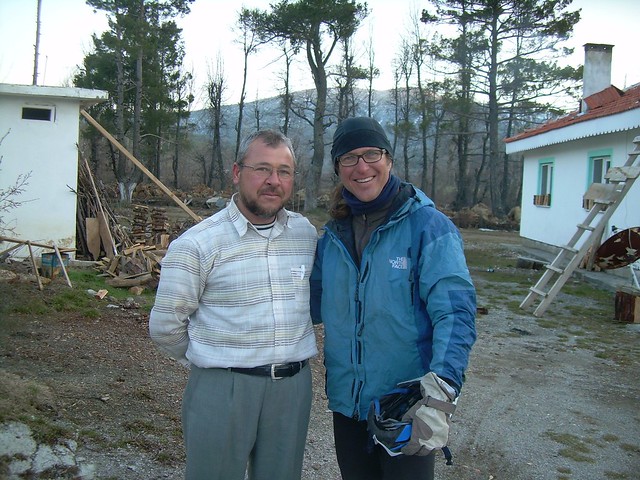 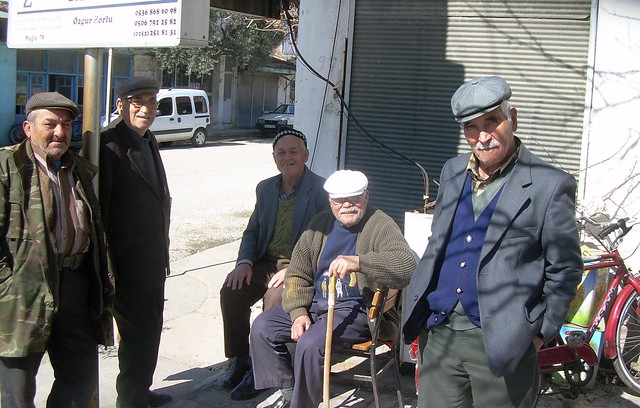 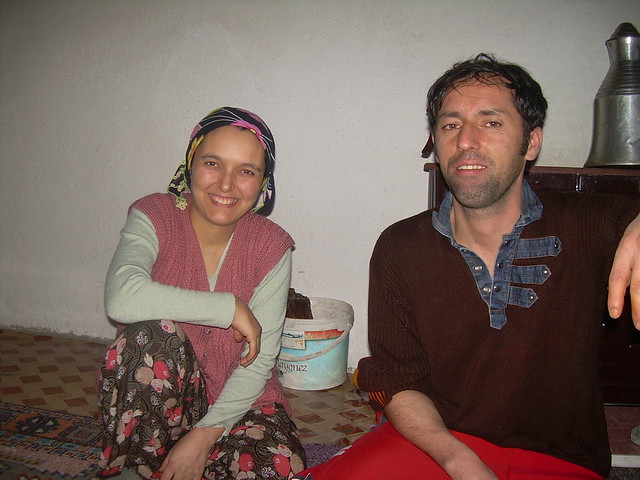 For someone who loves riding empty, unpaved mountain roads, the bicycling was a dream — much better than I’d anticipated. Turkey seems to have an endless supply of roads like this, even in February when a good portion of them were snowbound. You could spend years and not begin to hit them all. The lack of traffic was a particular surprise, given how relatively densely populated the country is. Thanks, $9/gallon gas! 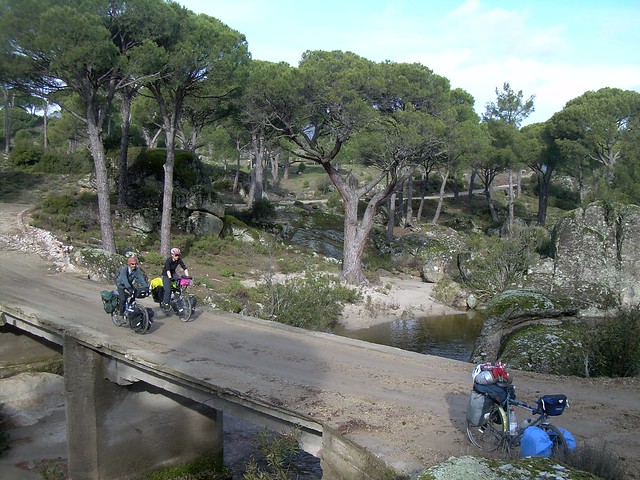 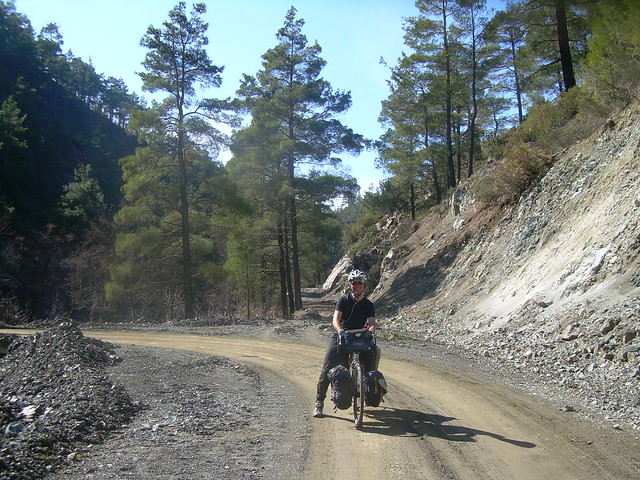 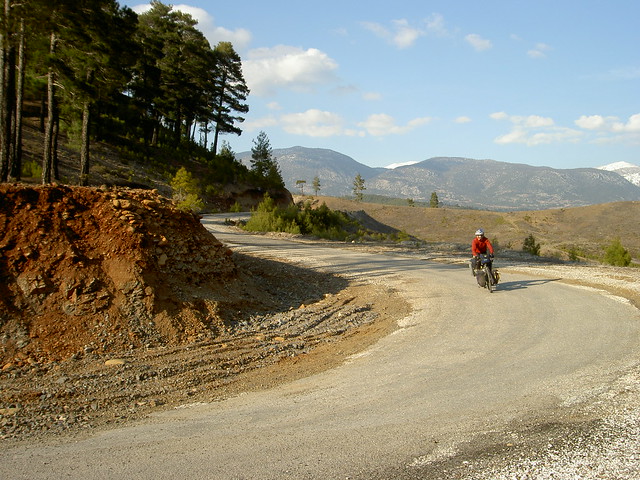 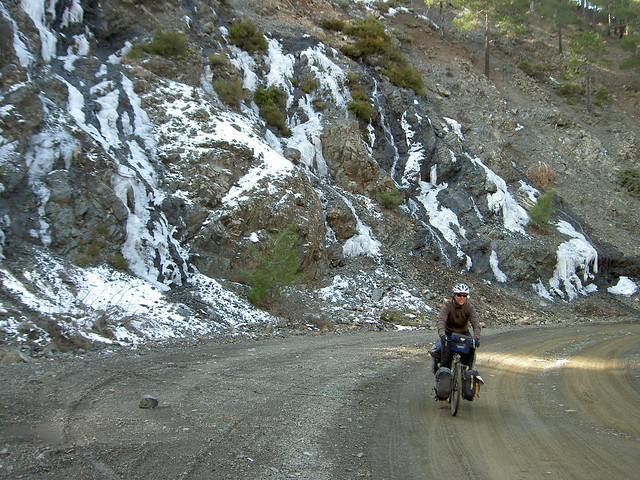 Mountains, mountains everywhere — not always snow-capped peaks, but at least hills — meant the topography was always entertaining to watch. And lovely villages, invariably with a minaret or two piercing the line of tiled roofs. Mountain background, village foreground: I never got tired of that combination. 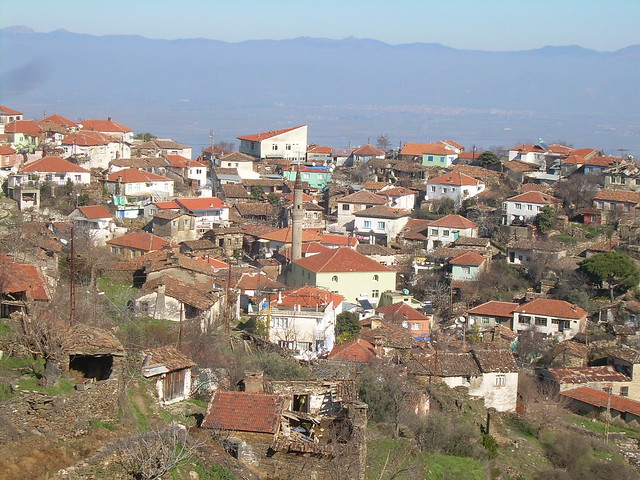 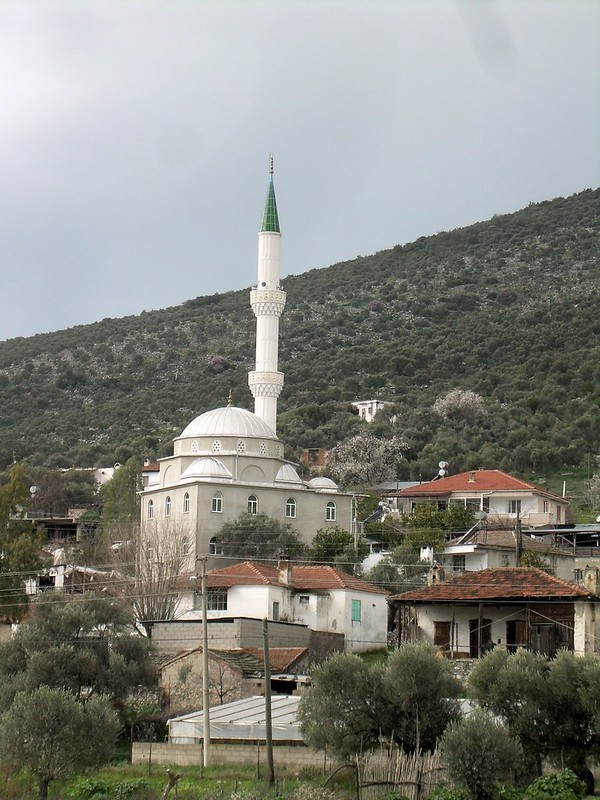 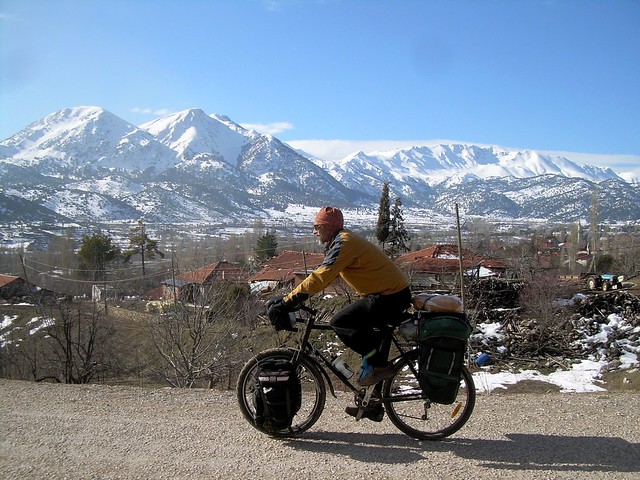 Food is inevitably an important theme in any bike tour, because you need so much of it and it tastes so good. I was expecting to be wowed by the food in Turkey, based on the raves I heard before I left. We certainly found good, flavorful produce at the weekly village “farmers’ markets”, though the smaller ones had very limited variety. Stores had little or no produce, but they had fresh bread and olives, tahini, and cheese. But the restaurants we went to were a disappointment: mostly what we saw were kebab and chorba places, and the couple of times we ate at them, the food was nothing to write home about. They also seemed on the expensive side, at least to us who had grown accustomed to paying 40 cents or so for a loaf of bread, and picking oranges up off the ground.

I can’t leave the subject of food without extolling the delights of Burçak. Like a cross between graham crackers and shortbread, they became my favorite dessert. When we were out of Burçak, we were out of food. 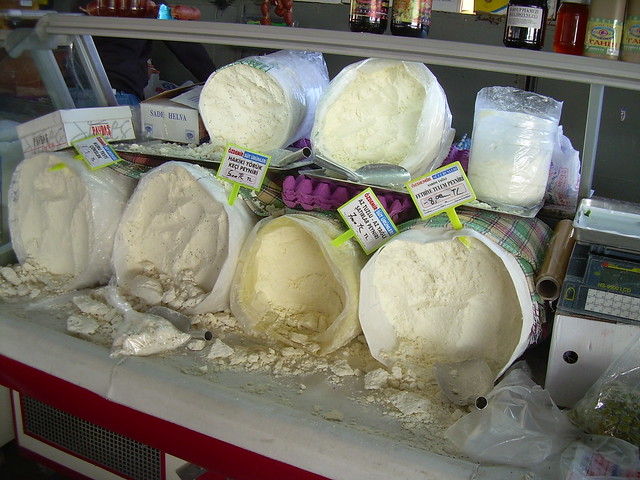 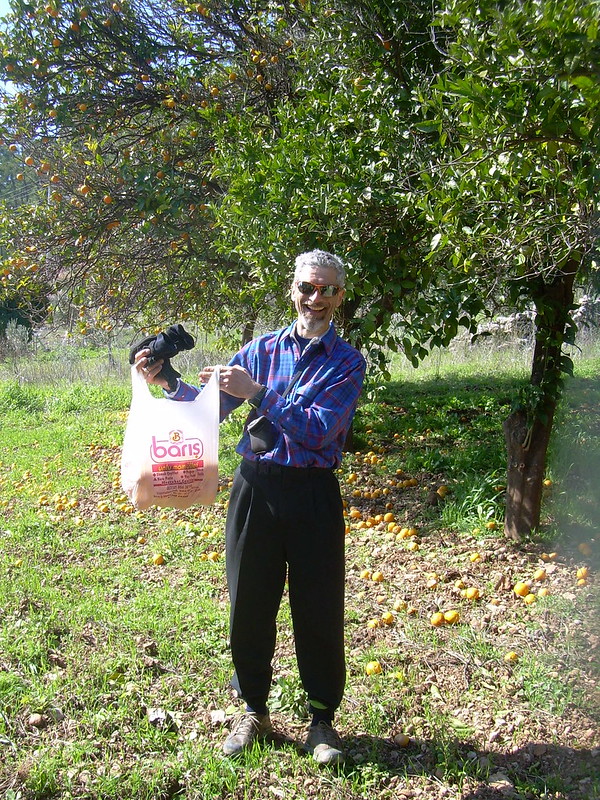 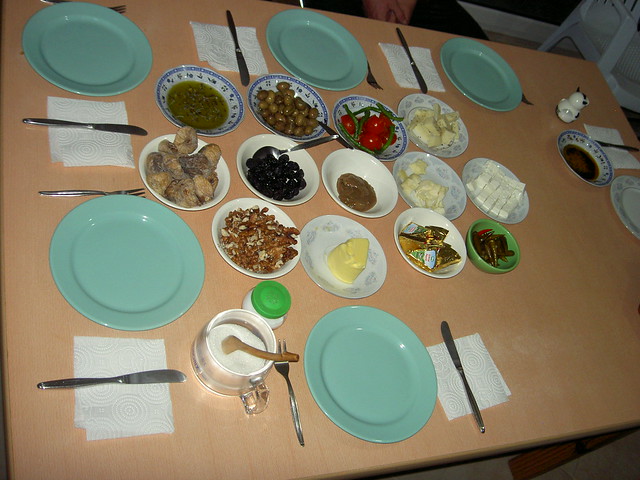 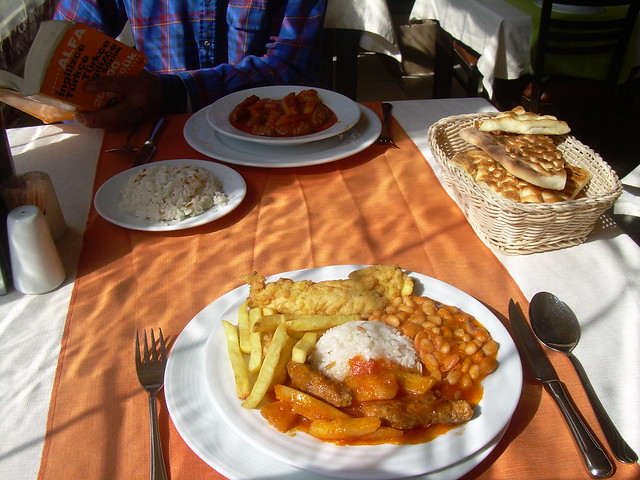 I’ve known Bryan for about twelve years now, and we’ve each done a variety of bike tours during that time. We’ve taken rides together, and we’ve done ski trips together, and assorted other adventures, but ironically, we’d never actually bike toured together until this trip. It worked out great, and I’m not just saying that because otherwise Bryan wouldn’t let me post on his blog. We had similar riding paces, and similar interests (such as: the steeper and more remote the road, the better), and when there were things to be discussed or negotiated, we discussed or negotiated. I had worried before I left about how to handle it if we got sick of each other, but that was never an issue. I hope and trust that I’ll get to join him again some time.

And the funny thing is, I don’t have any photos of just Bryan and me from this trip. So you’ll just have to imagine it.

This entry was posted in Bicycle touring, Turkey. Bookmark the permalink.