Virgin de Guadalupe is about as Mexican as you can get.  You see her image all over Mexico, in houses, in shops, on buses, even burned into people´s cloaks.  The most important shrine in Mexico is the Basilica of the Virgin of Guadalupe.  People come from all over the country, by bus, by bicycle, and on foot to celebrate their patron saint´s special day, December 12.

I joined them for the last five kilometers as I walked from San Juan de Aragón to La Basílica.  It´s not unusual to carry an image of the Virgen of Guadalupe during the pilgrimage. 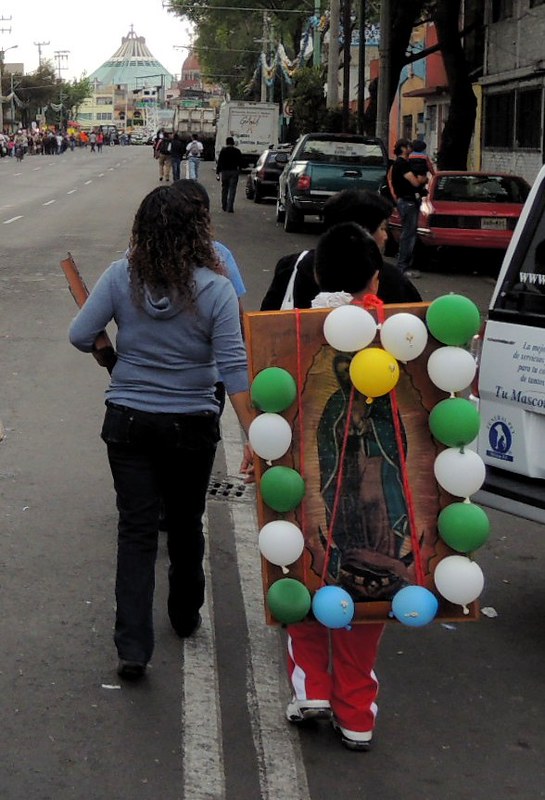 Of course if you didn´t bring your own virgin, they were plenty of places to buy one, but images of La Virgin weren´t the only thing for sale.  There was lots of food, including local specialties like chapulines. 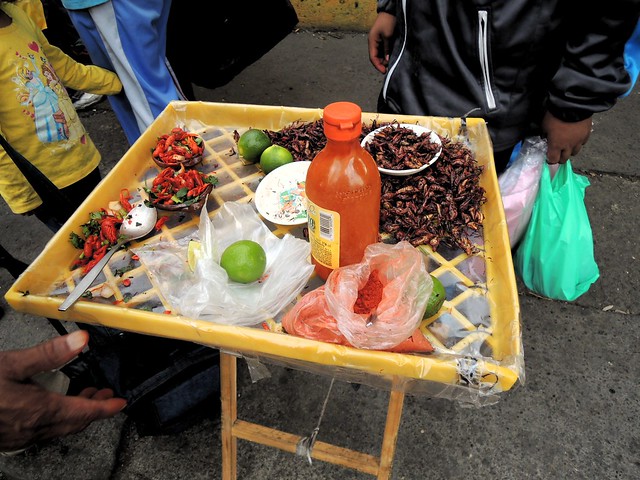 I think grasshopper is the best translation.  Once I got to the basilica I was treated to numerous Native American dances, full of colorful feathers and wild costumes. 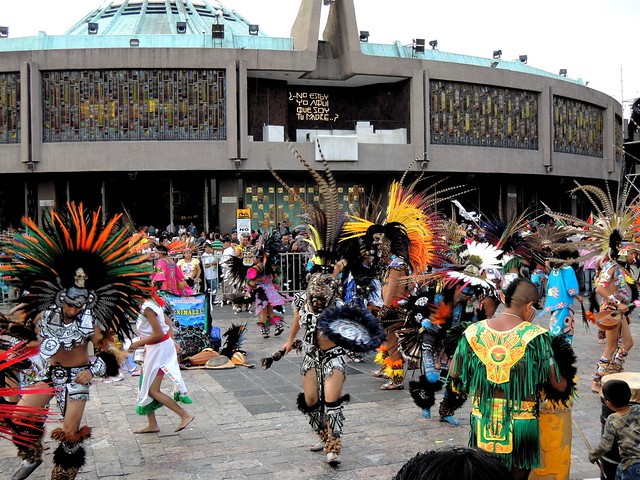 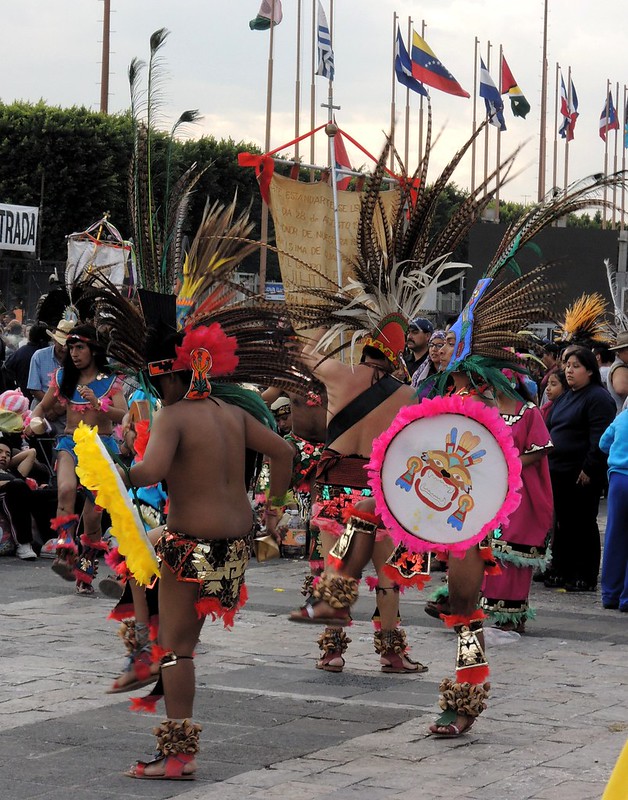 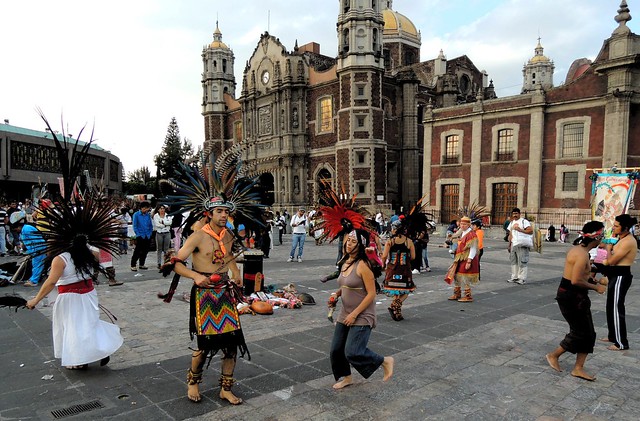 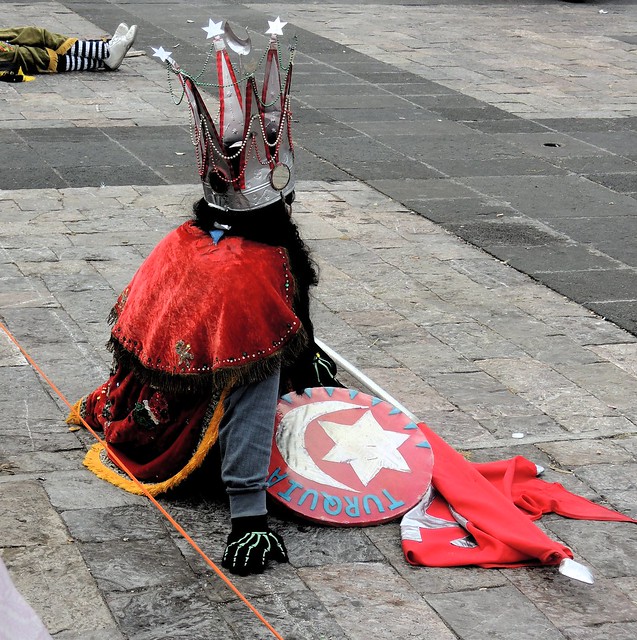 Coming from Turkey I wasn´t sure how to take this.  How would Turkey reenact the Crusades in a street dance?  Would they?  At any rate, what a great day to visit Mexico´s most important pilgrimage site.

From Mexico City I took a bus to Puebla where I stayed with Vicky, a couchsurfing host, for about four days.  Wow, what a packed four days.  Vicky was great and took me to all the main sites in the area, including Puebla´s magnificent cathedral with the tallest towers in Mexico; Museo Amparo which houses small but impressive collections of pre-Hispanic carvings, Mexican silver, and colonial-era furniture from some of Puebla´s rich families; and the world´s largest pyramid (by volume) in nearby Cholula. 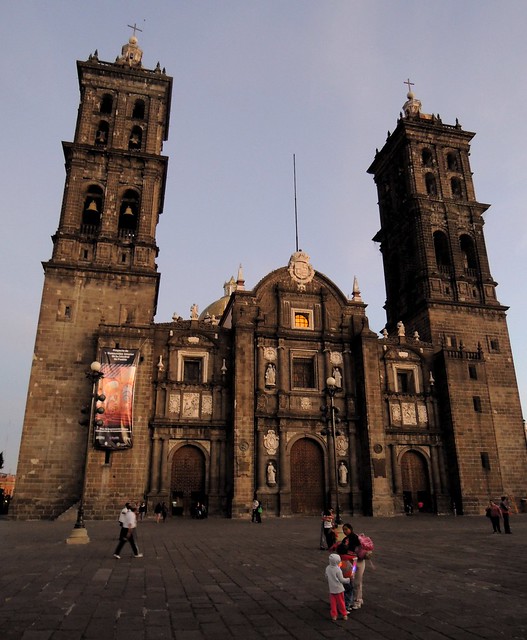 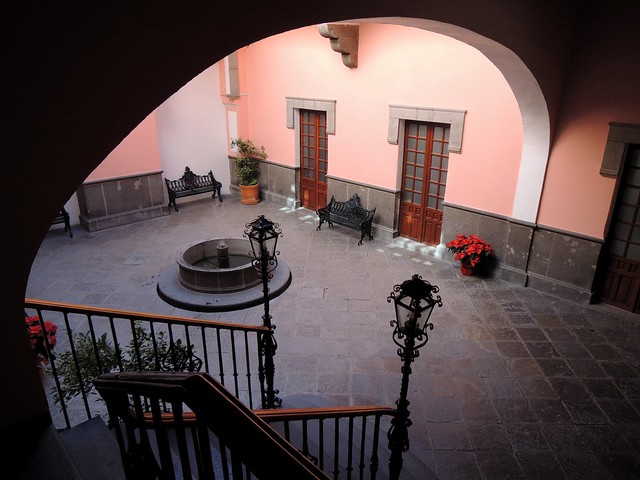 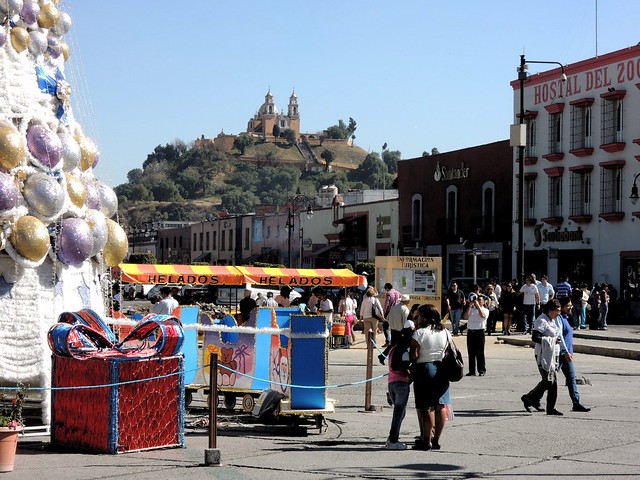 Cholula´s pyramid (above) looks more like a hill than a pyramid since it hasn´t been excavated. Even 500 years ago the Spanish didn´t recognize it as a pyramid and built a church on top.  It´s actually 6-8 pyramids built one on top of another.  INAH has excavated tunnels through the pyramid and inside they´ve excavated small alcoves so one can see the outer edges of the smaller pyramids on the journey into the center.

Both Puebla and Cholula are full of churches, and we visited quite a few, all impressive.  One in Puebla contains the fantastic Capilla del Rosario (photo), absolutely glittering from all the gold.  Inside Puebla´s main cathedral are three beautiful organs.  They sound terrific, according to Vicky.  One day with Vicky´s daughter, Jocelyn, we visited two churches in Cholula, Tonantzintla (photo) and Acatepec (photo), built by indigenous people and full of carved baby faces and bodies, representing innocence. 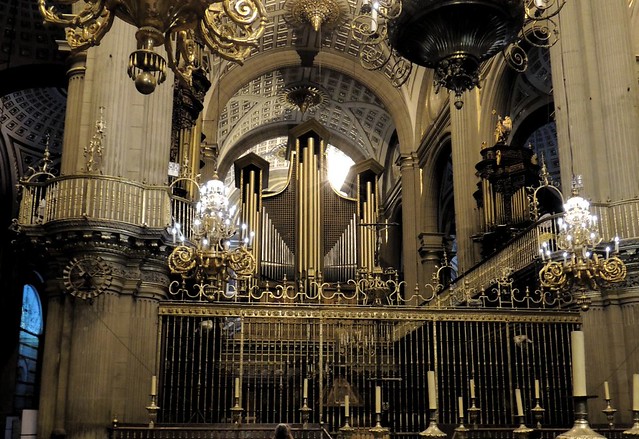 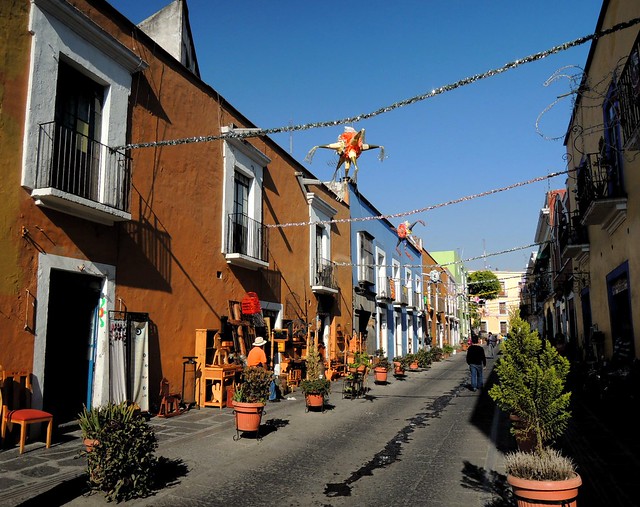 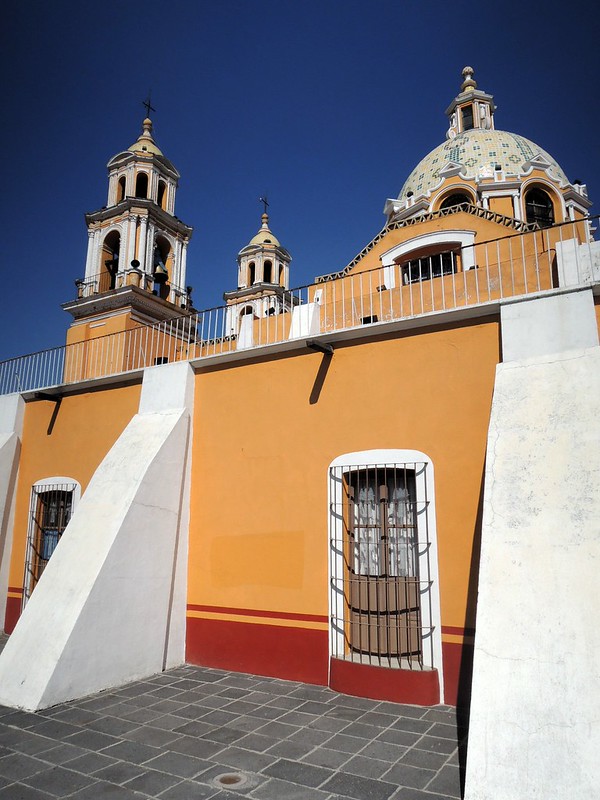 Jocelyn is married to a Swiss, Peter, who came to Mexico for a three-year contract 24 years ago.  They have two great kids, Davíd and Samantha.

I´ve been on the lookout for pulque during my last couple trips in Mexico and, with Jocelyn´s help, finally found some here in Puebla.  I bought a couple liters to-go and convinced Peter to join me one night.  At the first taste, he said, “well, I´ve tasted better pulque.”  “Have you tasted worse?”  He didn´t reply right away, but when he was ready to leave, he politely said, “I´m not sure if I´ve tasted worse pulque.”  Indeed, it wasn´t good, but I persevered and found a fun pulquería in DF a few days later. 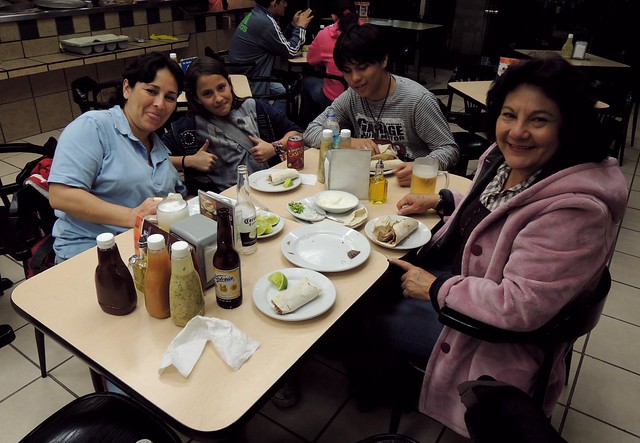 I passed a super four days with Vicky.  We talked a lot, but it seems like mostly what we did is eat, including some things I´d never tasted in Mexico before like cemitas, tacos arabes, and lahmacun.  The funnest meal was in Cholula´s market where we bought some meat from one vendor, handed them to another vendor to cook, and picked up salsa, guacamole, and tortillas from other nearby vendors. 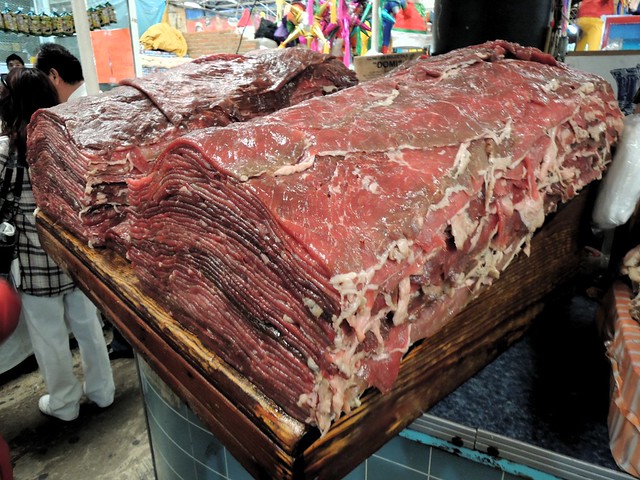 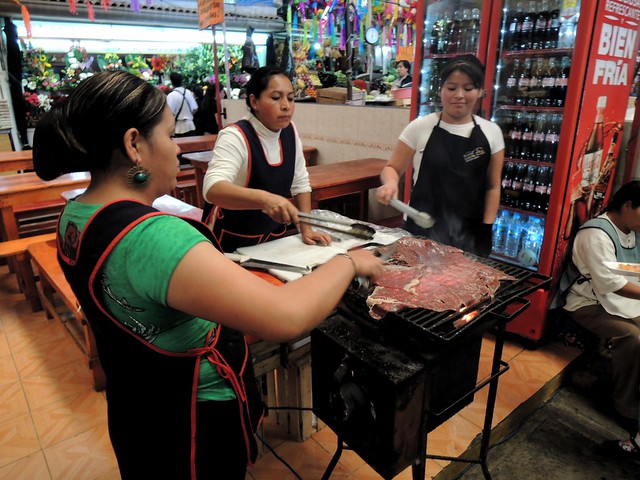 This entry was posted in Mexico, Traveling and tagged Mexico City, Puebla. Bookmark the permalink.

2 Responses to Playing tourist in Mexico City and Puebla