This is an e-mail that Wendy wrote just after spending the day with the butterflies, a couple days before Christmas.  I’ll only add that the “small city” is Zitácuaro, Michoacán’s third largest city. The reserve area we visited is called Cerro Pelón. Our trout lunch was in Macheros. I added the photos too.  Bryan

Hola from a small city somewhere in Mexico!

We saw the monarch butterflies today and I could come home right now a happy girl!  It was everything I dreamed it would be! 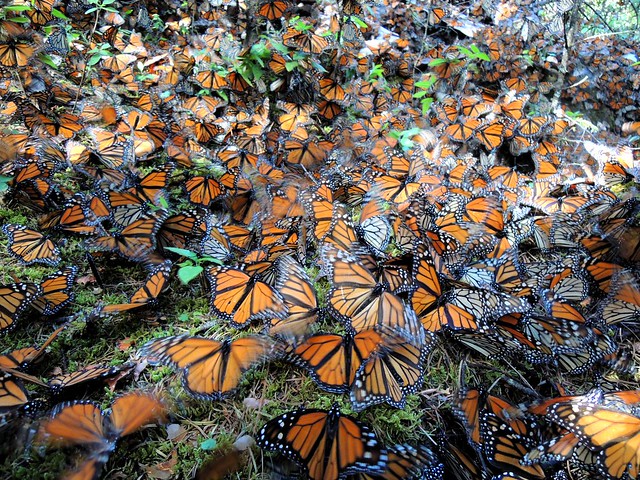 We chose to go to the least touristy of the five butterfly reserve areas: partly because it was the newest and had the best preserved habitat (no logging), and partly because… who likes crowds?  When we arrived at 8am after an hour of minivans and taxis, nobody was there.  No tourists, no employees, and NO ANNOYING SOUVENIR SELLERS!  In Spanish, the sign said it was open 9am – 6pm.  The same sign, translated in English, said 8am – 4pm.  It also said we must hire a guide.  Since there was nobody to pay, we started hiking up the trail – alone. 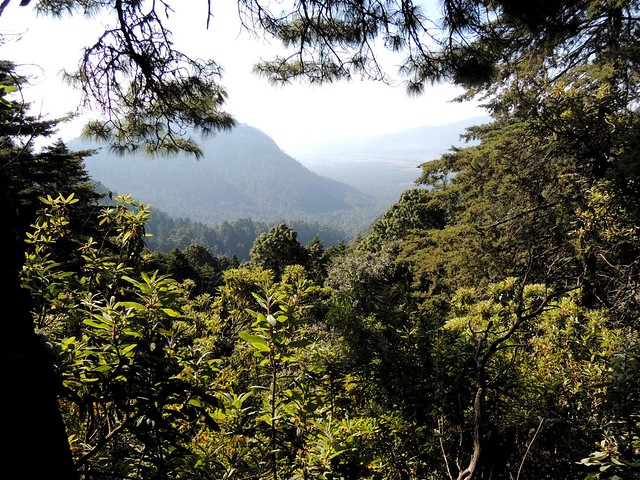 The guidebook said to expect to see butterflies after 1.5 to 2 hours, depending on your fitness level.  Of course, I was disappointed when we saw nothing after 1.25 hours!  At 2 hours, I mentioned ¨Plan B¨ to Bryan (meaning go to the ultra touristy site tomorrow).  At 2.25 hours, Bryan spotted 3 butterflies – and from then on, they were everywhere!  3 on a tree branch, 2 on a fence post, 6 darting around the sky – everywhere you looked… monarch butterflies.  We were ecstatic and took a gazillion pictures! 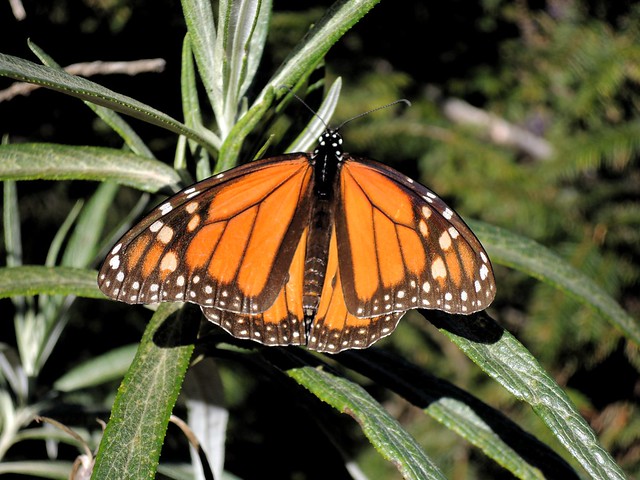 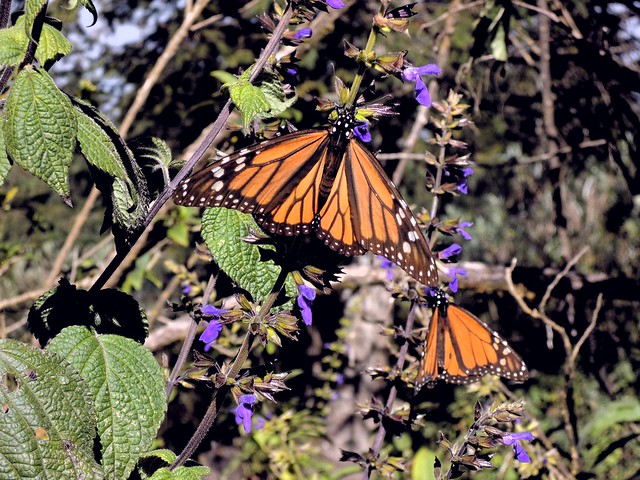 We sat down to eat, and 2 local boys (12 years old?) came up the trail with 2 tourists from Mexico City.  They were surprised we did´t have a guide, and told us to follow them.  We headed 5 minutes down the other side of the mountain and… 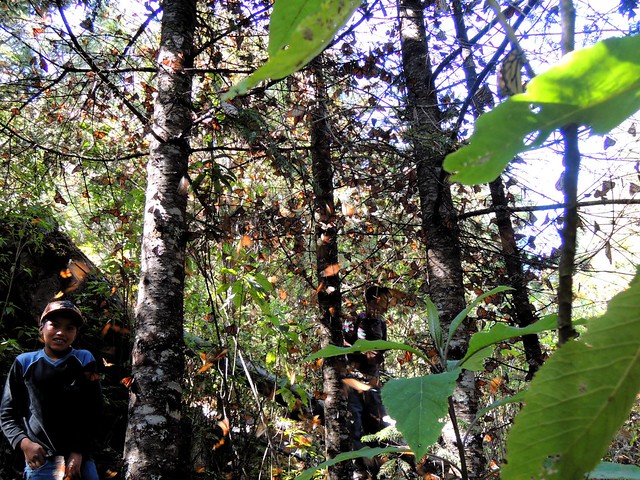 Wow.  WOW!  There were entire TREES covered with butterflies!  The branches were hanging down with them, and you couldn´t see the tree underneath!  I don´t know how many times Bryan said “Unbelievable!”.  We stood under these trees, being careful not to tread on any.  Suddenly, one of the trees came alive – and butterflies literally showered down and flew everywhere!  Some landed on us (!), many carpeted the ground, and most flew into the sky!  I had heard this was true, but didn´t expect to be this lucky… you could HEAR the sound of their wings flapping.  So, SOOOOOO cool! 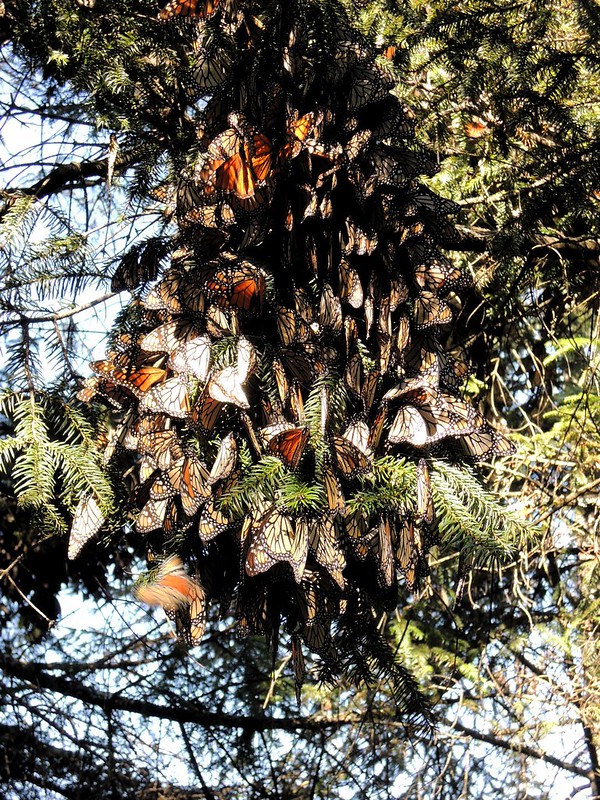 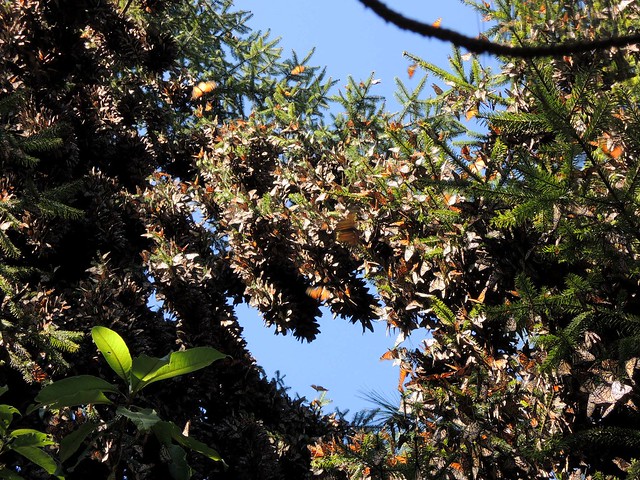 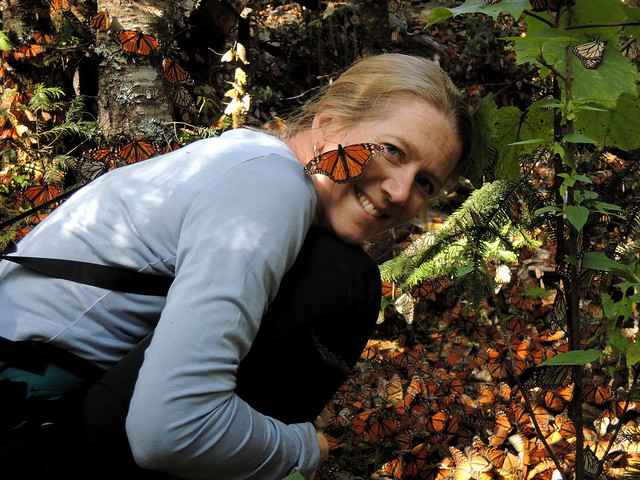 We stood there a very long time, taking photos, giggling like kids when they landed on our head and hands, and staring up into the sky.  When it came time to leave (it was chilly in the shade and we´d stood there for an hour!), you had no choice but to step on butterflies as you left.  I followed in Bryan´s footsteps so as to minimize the damage.  Unbelievable.  We tipped the boys as, without them, we certainly wouldn´t have found the most amazing sight of the day. 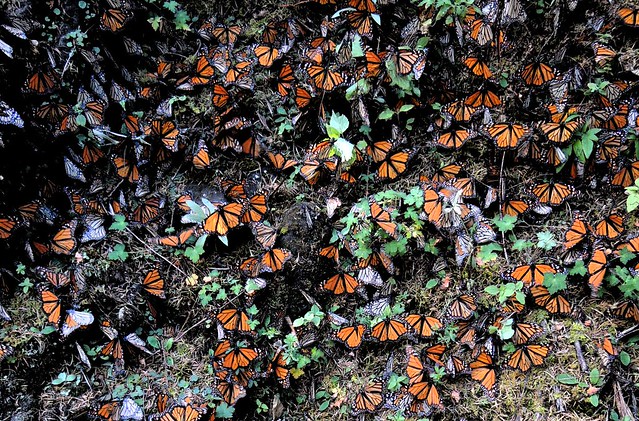 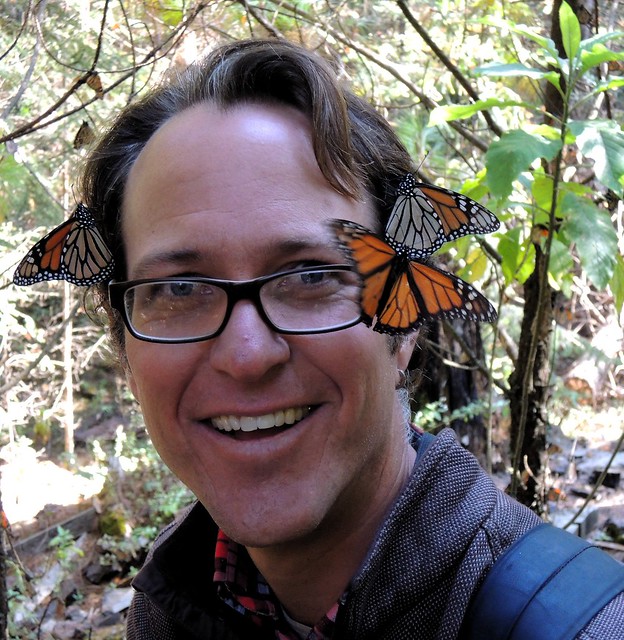 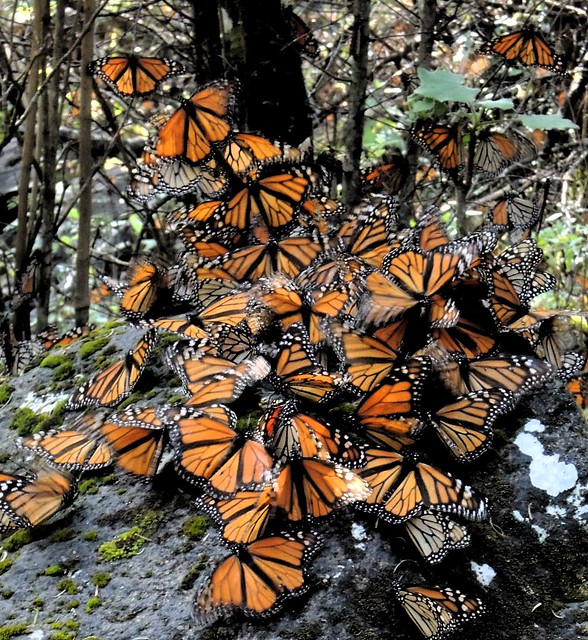 I learned about this place in Mexico several years ago while teaching the life cycle at school.  As soon as I made plans to come, I imagined myself lying on my back and watching the butterflies above me.  Bryan indulged me, and we lay in the grass for about 30 minutes after finishing our lunch.  It was so peaceful. 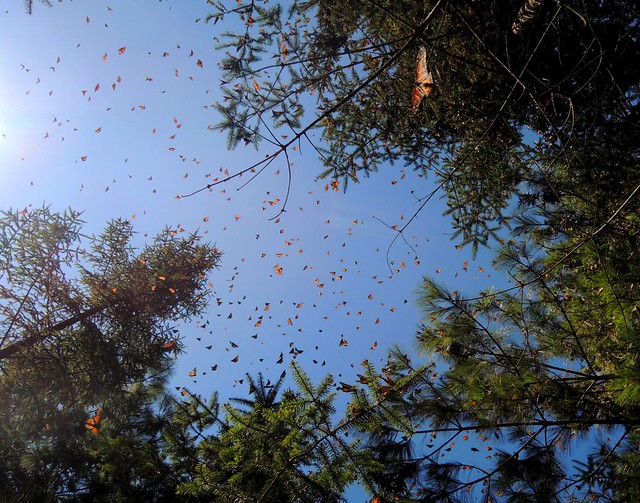 After spending 3 hours with the butterflies, we started our hike down.  There were quite a few tourists coming up – some hiking, but most were on horseback – and all were from Mexico (which was so cool to see!).  The hikers were certainly going to be coming down in the dark, but they had guides so…

On the way down, a 20 something guide started chatting with Bryan and invited us to his mom´s house for lunch.  I was a little nervous – not knowing how clean it would be.  It turned out that they are trying to start a B&B, and they specialize in trout (there was a trout farm in this little village).  We went, and for $13 US total, we had fresh vegetables, tortilla soup, grilled trout, dessert, and a drink (and none of it was spicy!).  It was refreshing to eat something different than tortillas, quesadillas, huaraches, and flautas – different Mexican dishes that basically include the same ingredients… and which I´m bored of already.  The son gave us a tour of the house his older brother is building to be the B&B.  The older brother arrived and spoke English – he had worked in the US for 11 years doing manicures and pedicures in Long Island!  He knew it was funny that a Mexican man was working there with the Asians, but he was good at it.  (In case any of you are wondering, there is no WAY this guy was gay.) 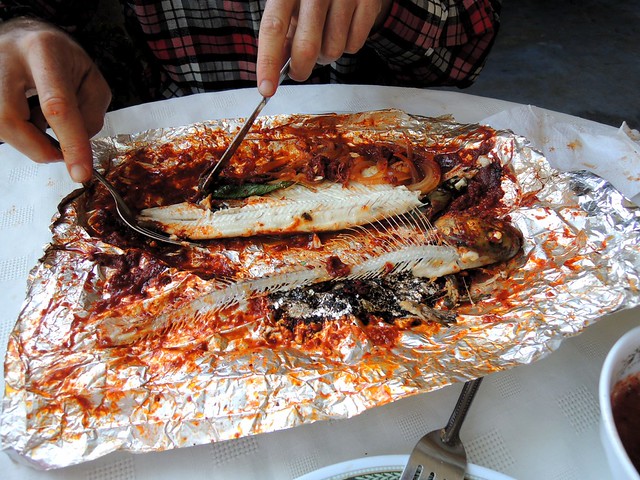 After lunch (4:30pm), we walked down out of the village.  On the way, I stopped to photograph some pretty flowers, and the owner invited us into her garden!  Her father (very old man) and daughter came over to shake our hands.  15 minutes later, we were on our way again. 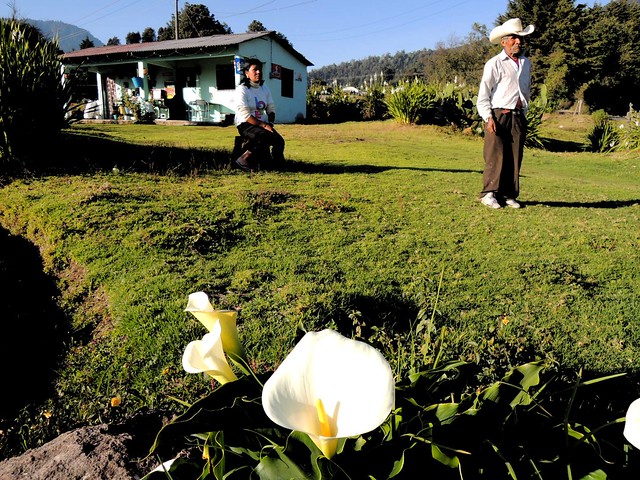 That´s pretty much it for our amazing day – except on the minivan ride back to whatever small city I´m in right now, the 20 something kid next to me was playing his music really loud.  (You sit on benches around the edge of the minivan – facing each other.)  He was a kid trying to look tough: pierced eyebrows, a scarf with skulls on it tied around his neck…  The song “Gangam Style” came on.  I started to show Bryan this “dance craze that´s sweeping the nation back home!” and did the horseback ride move, etc.  The kid next to me tried to hide his smile but broke out laughing at me! 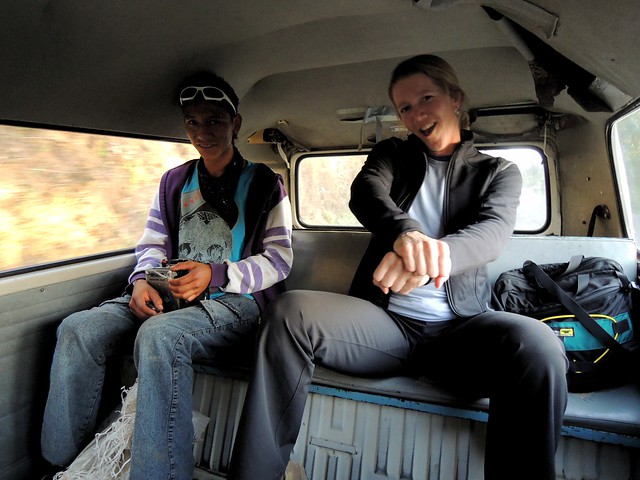 I don´t know what we´re doing for the rest of our trip, but honestly, I don´t really care.  New sights, new people, new experiences – it´s all good.

I hope you are all enjoying the holidays.  (Oh, each town has a zócalo – central square.  Right now, each one is decorated for the holidays.  None of the nativity scenes have a baby Jesus in them.  Baby Jesus will appear on Christmas Eve – when he is born, and not before.  How cool is that?!)

Thinking of you all.  Love, Wendy