I have now cycle-toured about nine months in Turkey, more than in any other country except maybe the US.  Much of that time has been spent in mountainous areas cycling on small roads connecting one village to the next.  Turks often ask me if I’m scared.  What’s there to be scared of, I sometimes ask.  Yes, I know how to fix a flat tire.  Yes, I get tired.  Yes, I might get hot or cold.  No, I’m not worried about bears, wolves, wild pigs.  There’s simply very little wildlife left in this country in spite of what many Turks believe.

In Romania also there was this concern about bears.  Indeed there are bears in Romania and Turkey but not many.  The Colorado mountains and the Sierra Nevada mountains in California seem devoid of wildlife when compared to Alaska or parts of Canada, but Colorado has heaps of wildlife compared to Turkey. 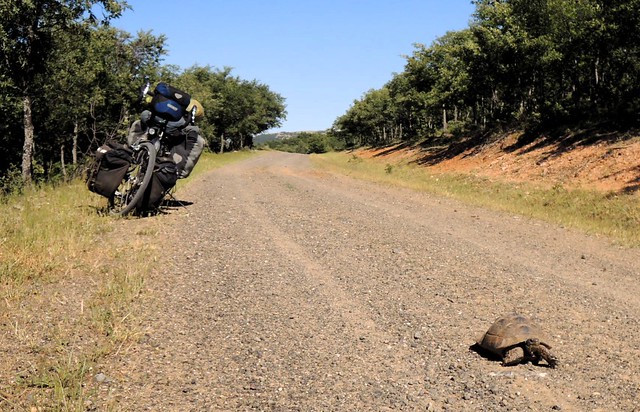 As far as animals are concerned, the biggest concern to cycle tourists in Turkey (excluding insects) is certainly dogs.  Dogs are a real menace in Turkey.  I’ve been bitten by dogs three or four times in my life, twice in Turkey.

A few weeks ago in Aslanbeyli (Seyitgazi), I started a typical conversation by asking which road led into the mountains.  I got the typical advice: don’t go to the mountains by yourself; it’s dangerous.  What’s there to be afraid of this time, I wondered.  Dogs, the man warned, they’ll bite you.  Wow, now that’s an unusual response for a Turk.  I enthusiastically agreed (katılıyorum); yes, what a menace dogs are in Turkey.  Oh, wow, this really ticked the man off who said no, no, no, Turks love dogs and took quite the offence that I didn’t like dogs.  That in turn pissed me off because less than minute after he warned me about biting dogs in the mountains, he was telling what great friends (dost) men and dogs are in Turkey.

It’s much more common for Turks to warn about pigs.  Indeed wild pigs commonly destroy crops near the forests in Turkey.  Supposedly it’s illegal to hunt them, but Turks send out posses in fruitless attempts to eliminate this menace.  In Artvin last summer some nights I heard what sounded like gunshots.  These are simply propane-powered noisemakers designed to scare the pigs and keep them out of the fields.

Finally one morning near Yenipazar (Bilecik) I got sight of my first wild pigs in Turkey.  I was camped down low between a small stream and a steep embankment that led to the road and the woods beyond.  I heard them first and since the fly was off the tent because of the heat, in the first light of the morning, I saw the pigs running up the embankment near my tent.  I went back to sleep.  Later that morning I climbed a pass (and crossed into Bolu) and near the top I came across two pickup trucks full of men with big guns.  They had killed 10-15 pigs that day.  I saw five dead ones where I caught up with the hunters.  From the pass I descended, climbed another pass, and camped at the top.  Again that evening pigs came by my camp.  Wow, what a day.  I haven’t seen or heard any pigs since. 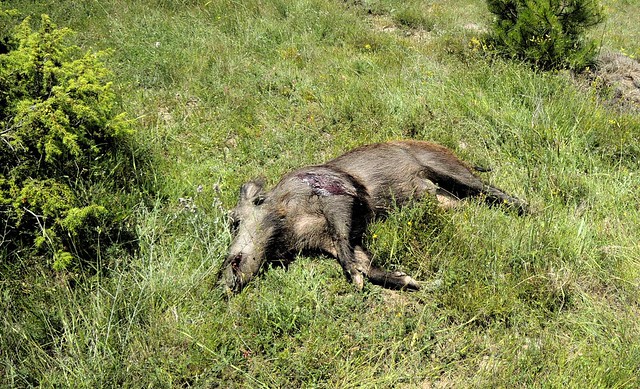 Of course I don’t have photos, but these are the two camps where I was visited by pigs: 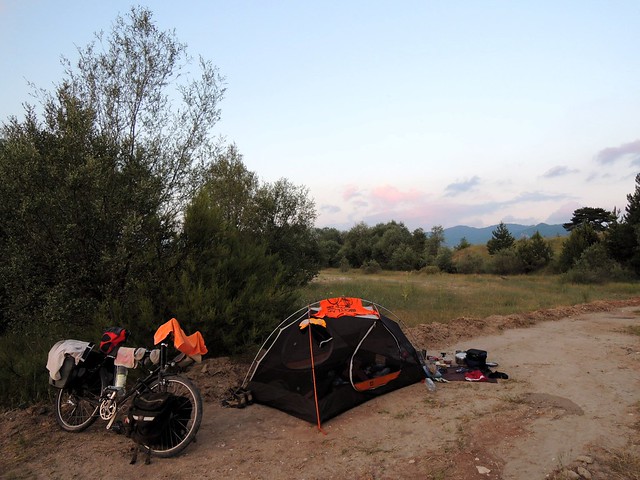 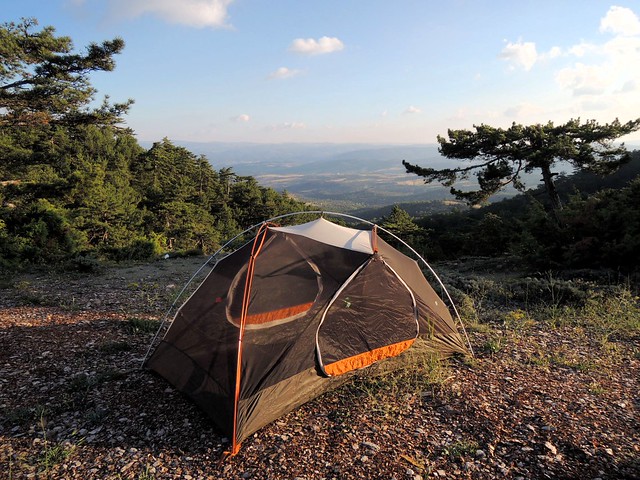 For religious reasons Turks won’t eat the pigs so they simply leave them dead where they’ve killed them.  Ah, yes, food for the dogs which of course I’m none too happy about.  I did eat wild pig in Antalya once.   A Turk had killed the pig and given the animal to some mutual (non-Muslim) friends who served me wild boar paté one evening.  Some foreigners really miss not eating pig and bring pork back to Turkey when they come from abroad.  I could take it or leave it.  When I went to Mexico last year, I brought back tequila…

Recently near Karabük I camped by a stream next to a cliff.  I set my tent up in a place that seemed quite safe from rockfall, but I wasn’t there long when I heard a rock tumbling down the steep slope not far from my camp.  I looked over and what??!!  Whoa, it’s a turtle!  I snapped a photo before helping it back on its feet.  Last I saw of it it was making it’s way back up the very steep slope, something I considered impossible before actually seeing it. 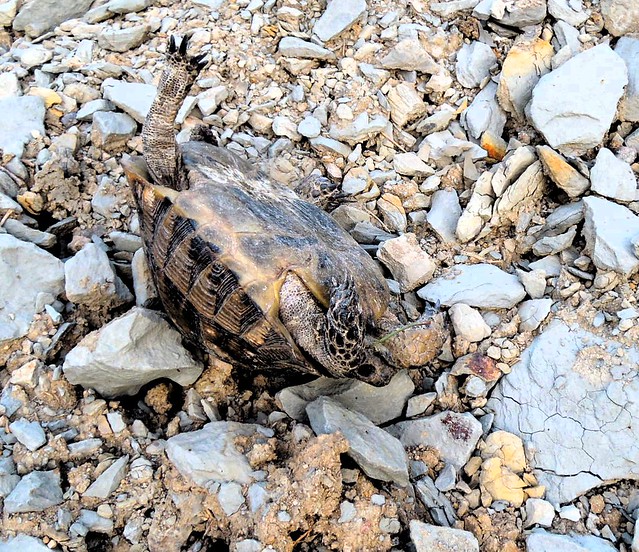 On the climb to Harmanköy I saw the smallest turtle I’ve ever seen: 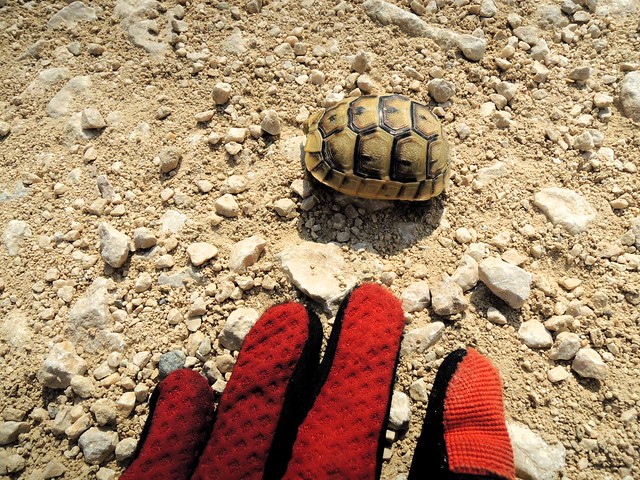 followed a day later by one of the largest snails I’ve ever seen (not the biggest snail ever, however; that honor goes to one Juile and I saw on the road in Malawi; it was the size of her foot!): 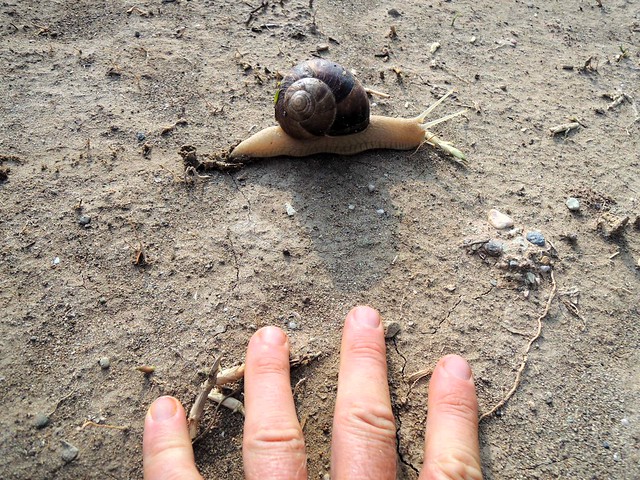 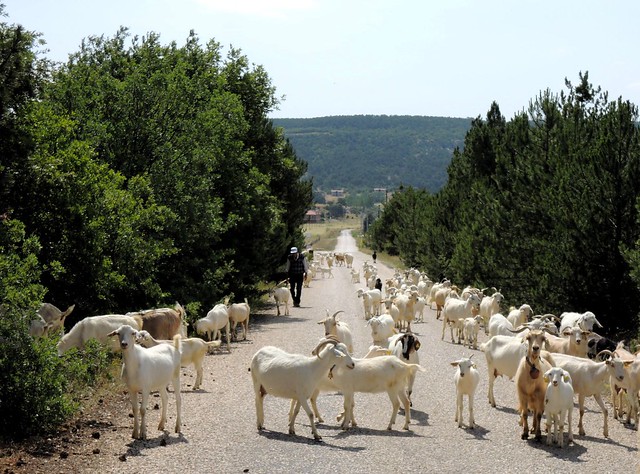 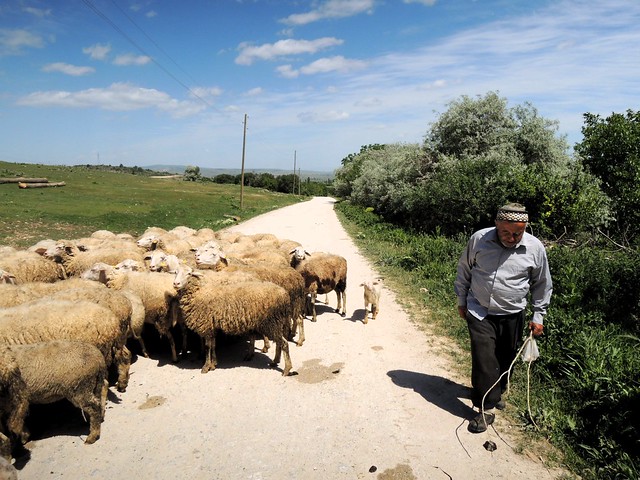 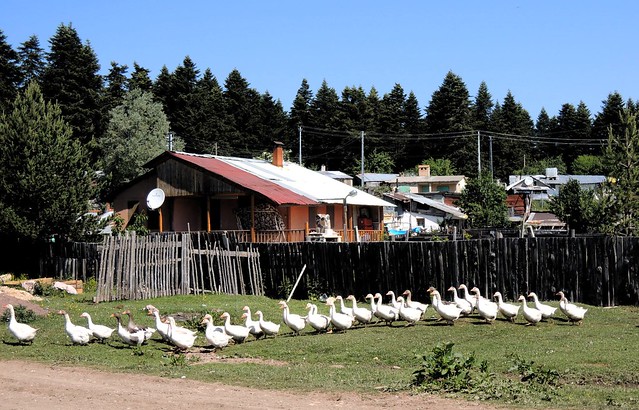 Or if I’m lucky fish: 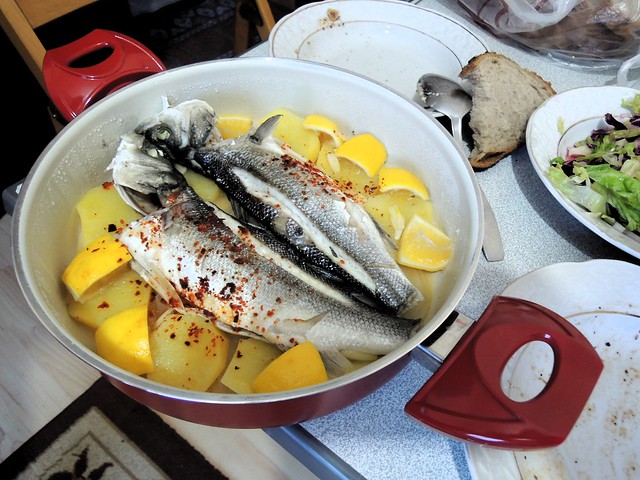 In case you think it’s really all about animals, my typical dinners at camp are actually tasty vegetarian meals: 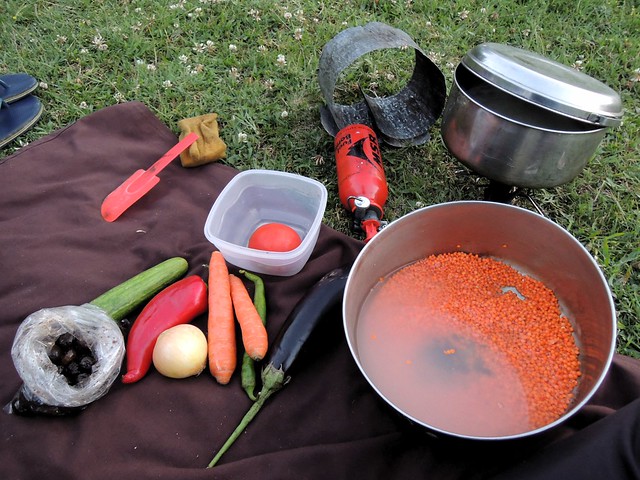 1 Response to Wild animals in Turkey?