A couple of weeks ago I had the fabulous opportunity to join a group of experienced canyoneers for a descent of Ahmetler Canyon (Akseki, Antalya).  We ended up being 10 people.  Six or seven of the folks are members of the Antalya branch of Turkey’s search and rescue group, AKUT.  I loved the way everyone worked well together, and everyone helped everyone else out.  It really was a super group/team.

We were five men (İbrahim, Ömer, Hamit, Kayme (sp?), me) and five women (Hatice, Nilüfer, Ayla, Berrin, Elis).  İbrahim was the leader.  He’s a fairly quiet, laid-back leader.  Also, his Turkish is extremely difficult for me to understand.  I feel a little better about this since even Turks have a hard time understanding his Turkish.  It’s amazing how much he’s able to say without moving his lips.  This is certainly not helpful for me.  As a leader, however, I can see that he’s quick to accurately assess people’s abilities, knew which people might have trouble and where, and set things up so the trip would go smoothly.  Here he is on the right: 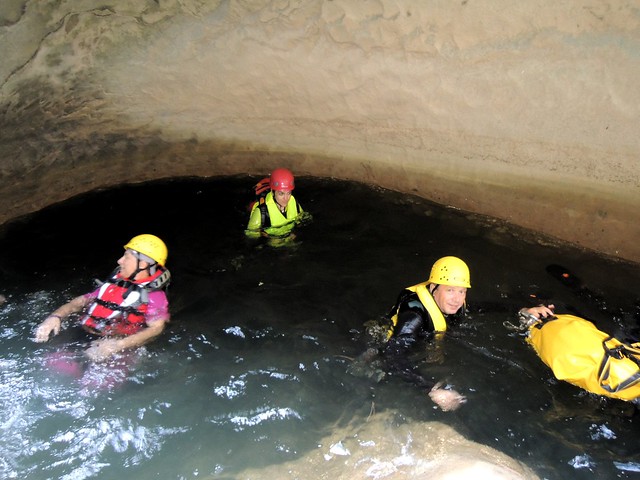 My only complaint would be that no one pushed us along to move a little more quickly.  We took our time and ended up paying for it by finishing a couple hours after dark and having to do one waterfall rappel in the dark.  Our progress in the dark was very, very slow (and careful).  Had we had one additional hour of light (by spending less time at lunch or less time getting ready at the start), we could have been out before dark.

At the small bus we geared up — wetsuit, climbing harness, helmet, life jacket.  Then we walked along a road for a bit before getting to the water.  For most people this meant intense sweating in their full-length wetsuits.  I had borrowed a short-sleeve, short pants wetsuit, and the walk was warm enough for me that I took off my beanie.  Staying warm was a bit of an issue for me.  The only other one in a shorty wetsuit was Hatice, and she also got a bit cold a couple times.  While others enjoyed the time in the water, I stayed out of it as much as possible. 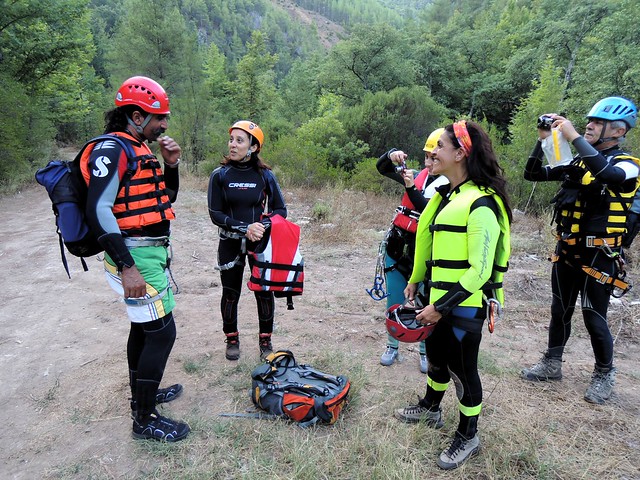 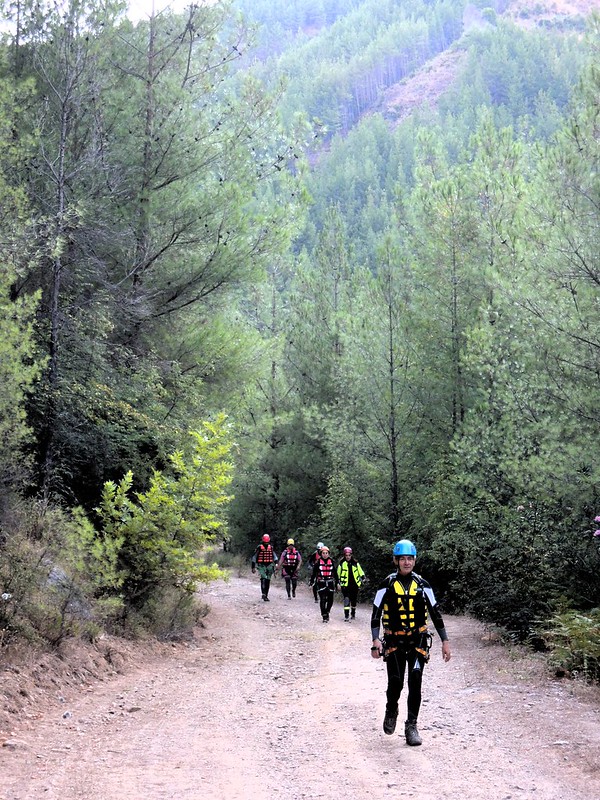 At the planning meeting before the trip — a fabulous dinner at Hatice’s house — İbrahim had said we’d be swimming in the water most of the time (80% maybe he said?).  Haha, I hardly believed that (this never happens in Utah…), but it was true.  Most of the time we were swimming through a deep narrow canyon like this: 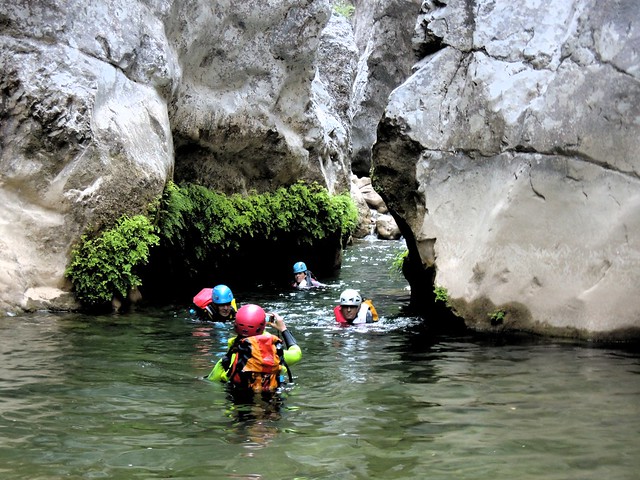 and most of the time I couldn’t get my camera out so I have relatively few photos of the swimming sections.

İbrahim and Hamit did most of the rope work — setting up the rappels and stuff.  However, after dark İbrahim asked if I’d rappel into a deep (4m) circular hole that had a waterfall going into it and no visible exit.  My mission was to retrieve one of the dry bags that had inadvertently made its way into this trap.  With a funky sideward-pulling hip belay from Hamit, I was able to climb back out.

The canyon started with a beautiful rappel that ended in the water next to a waterfall.  From there it was over twelve hours of swimming and climbing over obstacles.  There were few easy steps.  We almost always had to be careful.  It’d certainly be easy to slip and break an ankle. 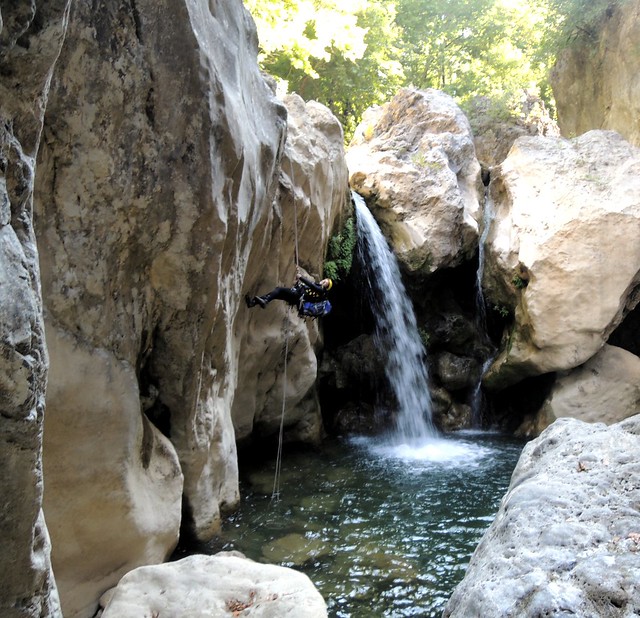 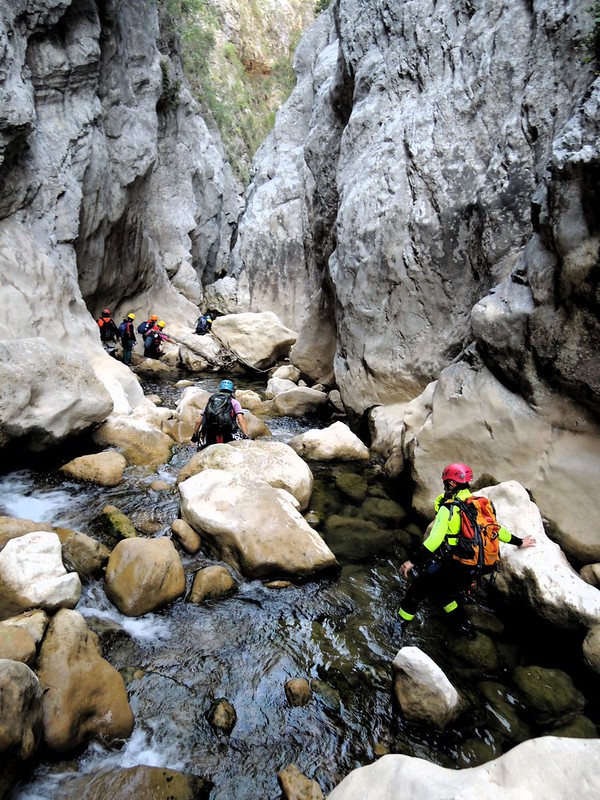 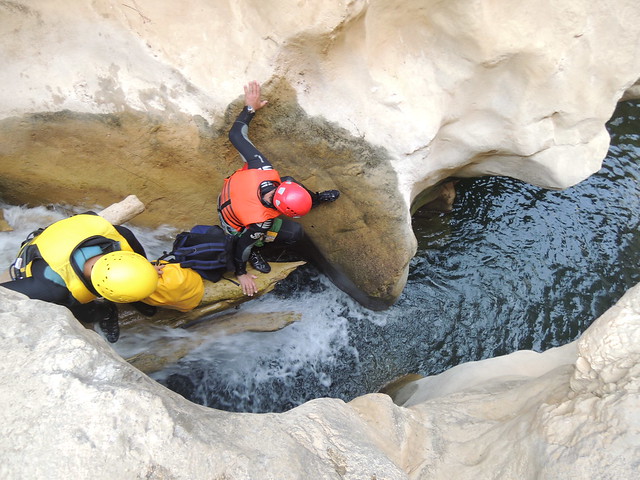 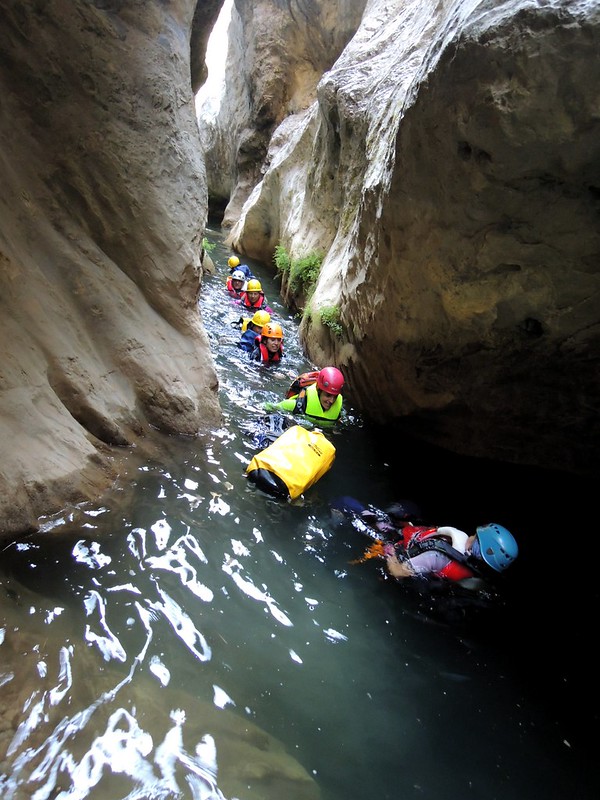 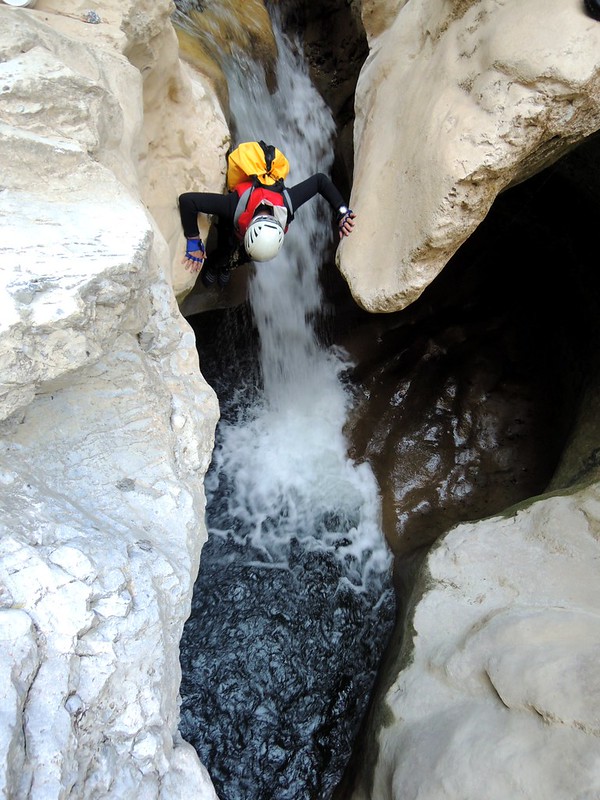 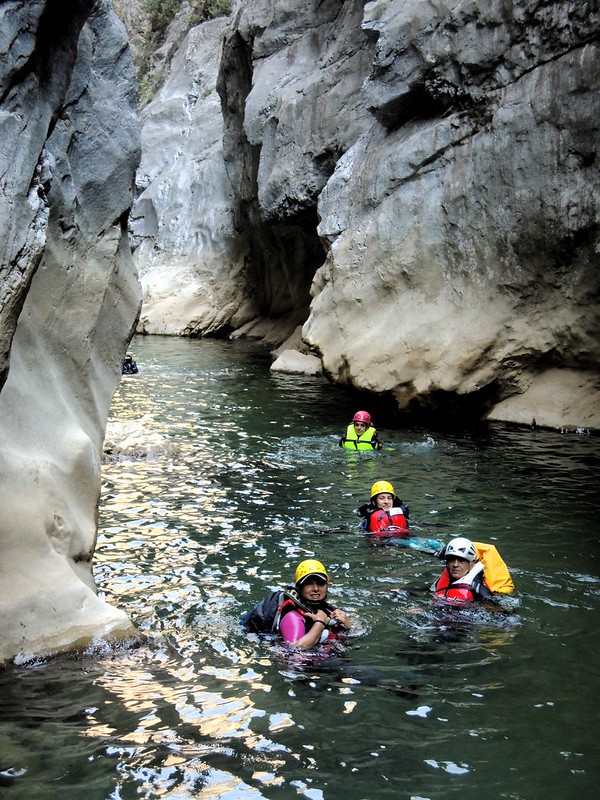 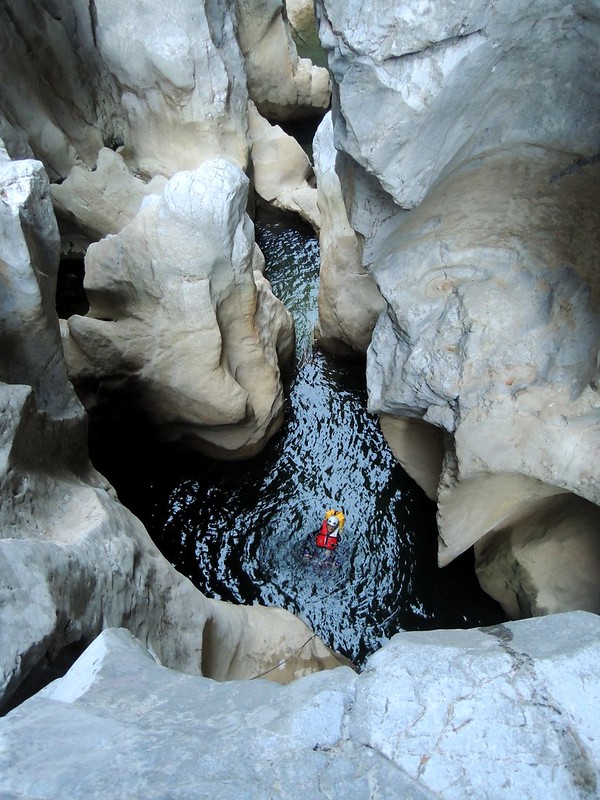 When it first got dark, I was genuinely scared.  The canyon was deep, loud, and black, and I was cold.  I imagined an uncomfortable night in the canyon.  Surprisingly for a such an experienced group, we only had two or three headlamps.  Like others I hadn’t brought one because I don’t have a waterproof headlamp — not really a good excuse as we were certainly happy to use Ayla’s non-waterproof headlamp and even managed to keep it dry.

However, we still worked together.  One thing I’ll remember is sitting on a rock in the pitch dark waiting for the rappel set-up.  There was no place to move.  We were surrounded by raging water.  I don’t even know who was sitting next to me, but she (he?) managed to get some dry food out of their pack and very carefully placed some dried fruit and nuts into my hand.  The darkness, the loud echoing canyon from the raging water, and the kind warm gesture of some nourishment…  I felt better, and we all managed to keep going and get out without injuries. 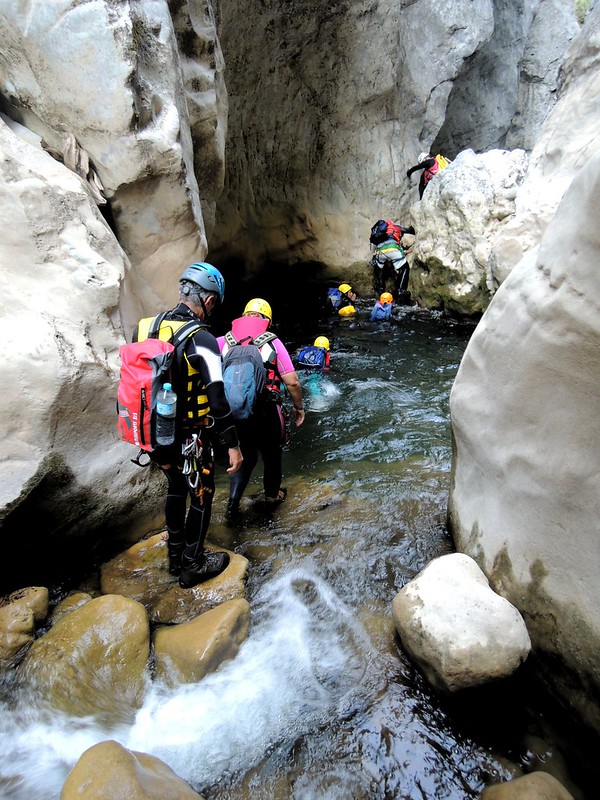 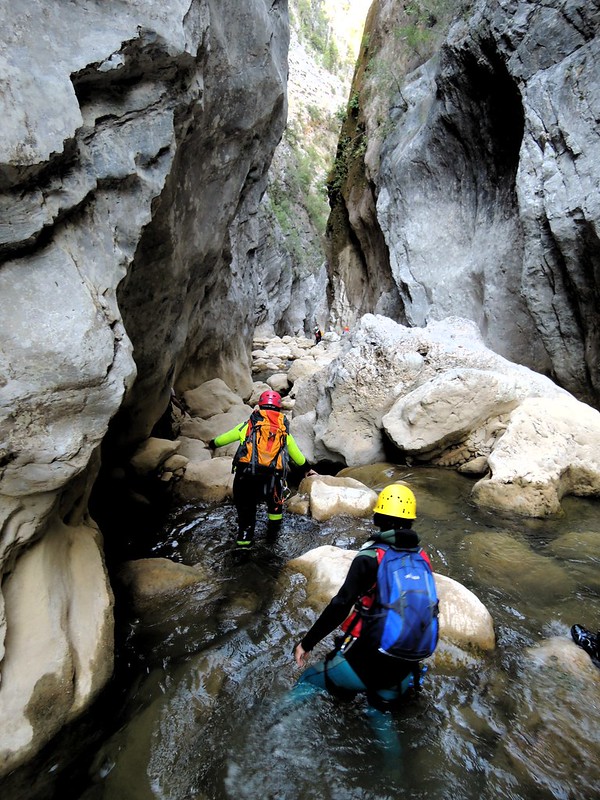 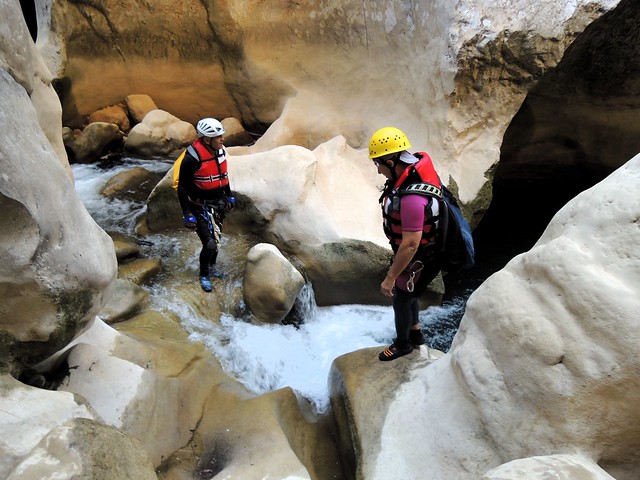 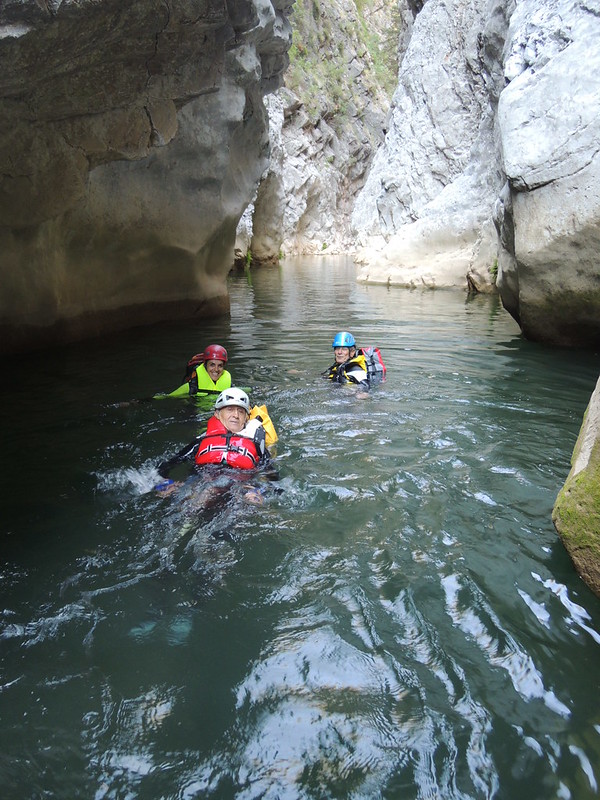 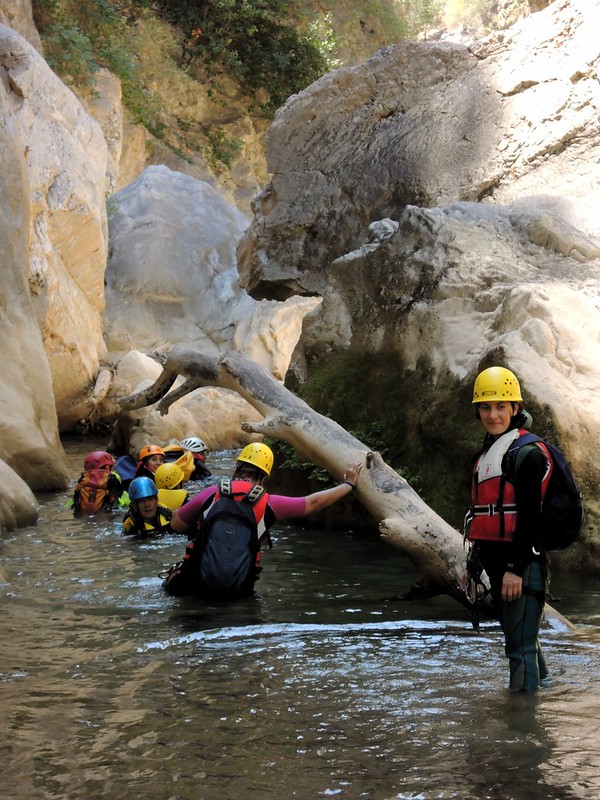 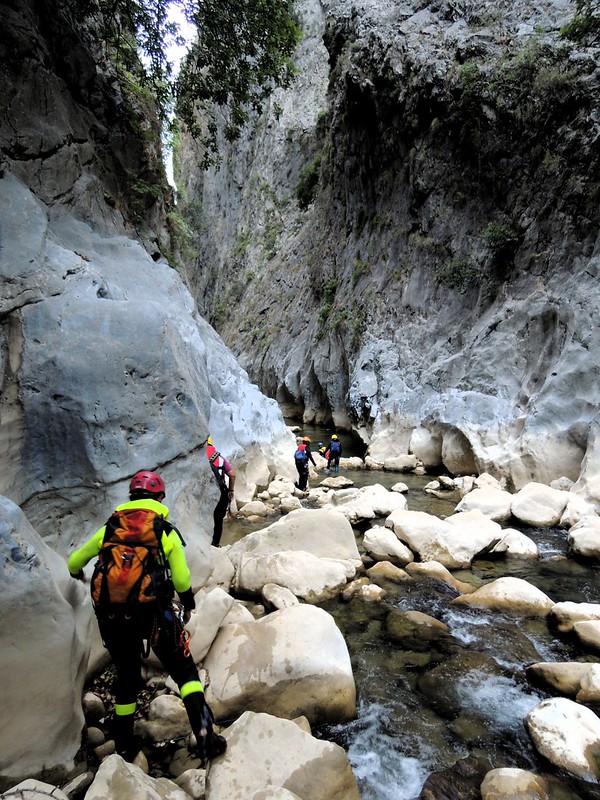 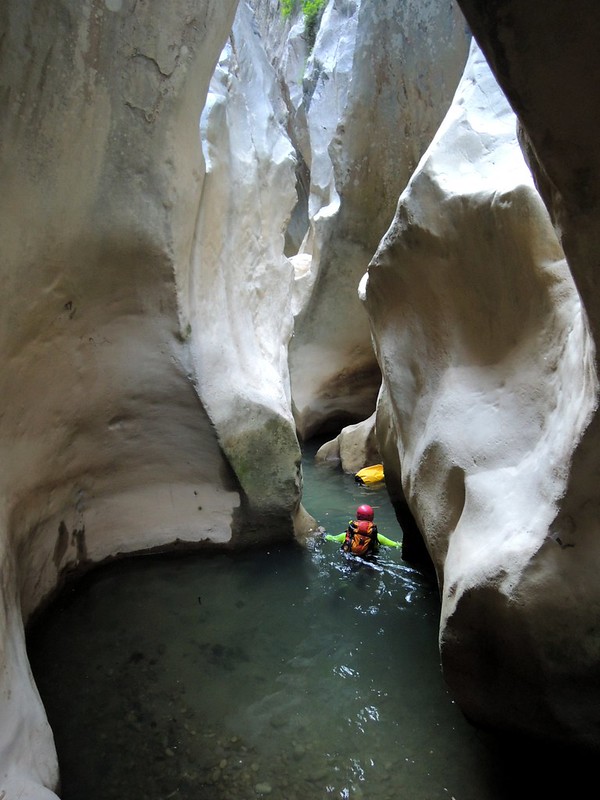 This entry was posted in Trekking, Turkey and tagged Ahmetler Canyon, Akseki, Antalya. Bookmark the permalink.

3 Responses to Canyoneering in Akseki