In spite of the rain we tried to get out climbing a couple of my weekends in Mexico City.  One weekend we went nearby to Los Dínamos, a national park in steep mountains that is literally at the edge of the city, not far from Copilco.  By the time we drove up there (stopping on the way for tamales and coffee of course), walked up to the damp/wet crag (there was some discussion as to whether it was mojado or simply húmedo), and climbed a pitch or two, it was raining for real.  We descended for beers and a yummy lunch, making it, I guess, a successful day.

A weekend or two later, however, we lucked out with the weather.  Or rather we drove far enough north of the city to get away from the storms.  We started on the way to Aculco but en route decided to drive even farther to Bernal (Querétaro).

Bernal is one of the popular Pueblos Mágicos.  It’s cute enough to walk around, but the attraction for climbers is La Peña de Bernal, one of the tallest monoliths in the world.  Wikipedia claimed it was the world’s tallest monolith until I corrected the entry (!); it seems like both Gibraltar and Pão de Açúcar in Rio are taller monoliths.  Isaac, Bigotes (Sergio), Fernanda, Ayex, and I climbed it in four pitches.  The first belay was hanging which makes one feel like a real climber once in a while. 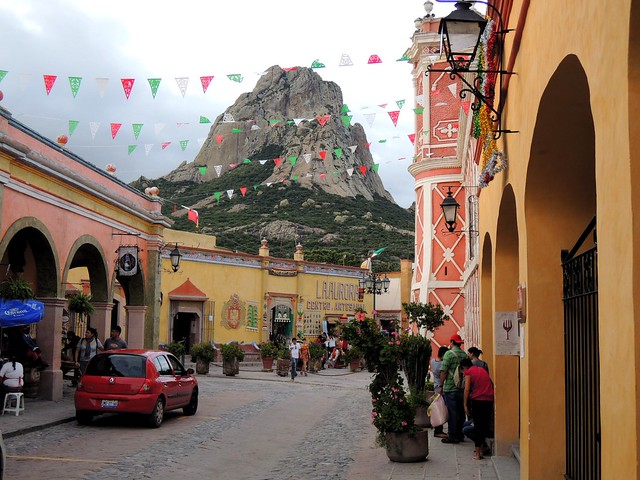 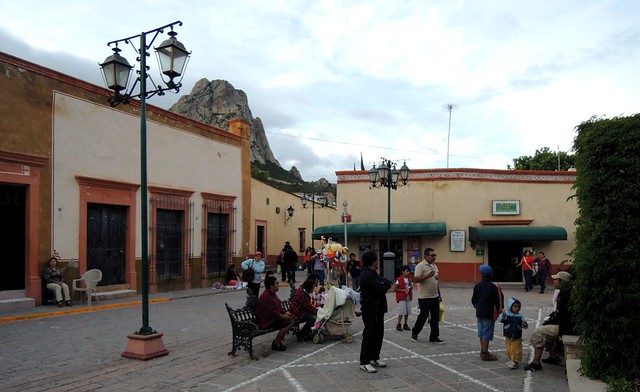 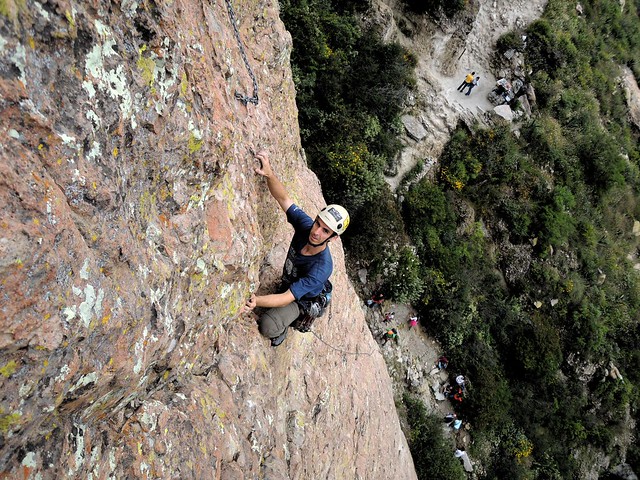 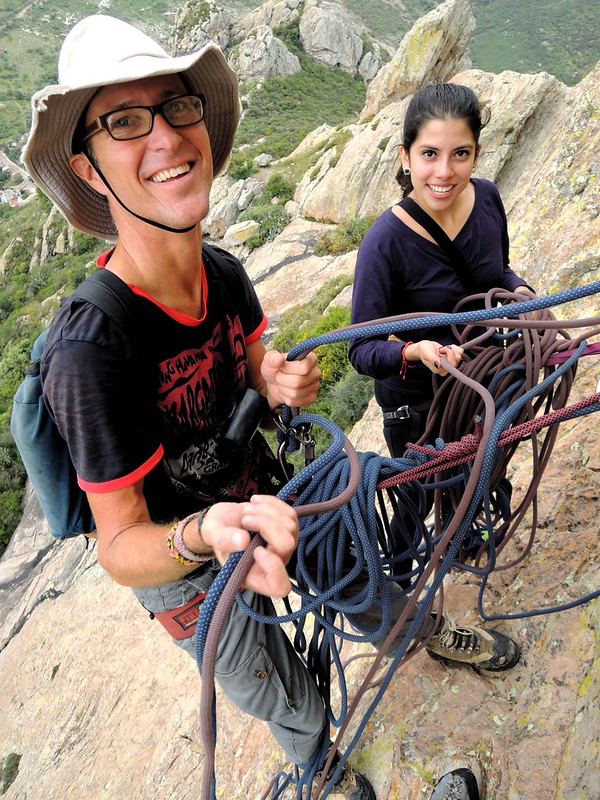 Lacking other options I climbed the route in the light hiking boots that I picked up used at Savers in Boulder for US$8 about three years ago.  The last pitch had me slightly worried.  It started out vertical, and at the same time it started with simul climbing since the rope didn’t quite reach.  I sure didn’t want to pull Isaac off the crag by making a dumb mistake at the beginning.  He had placed no pro on this pitch.  I hadn’t even bothered belaying him.  We were of course fine. 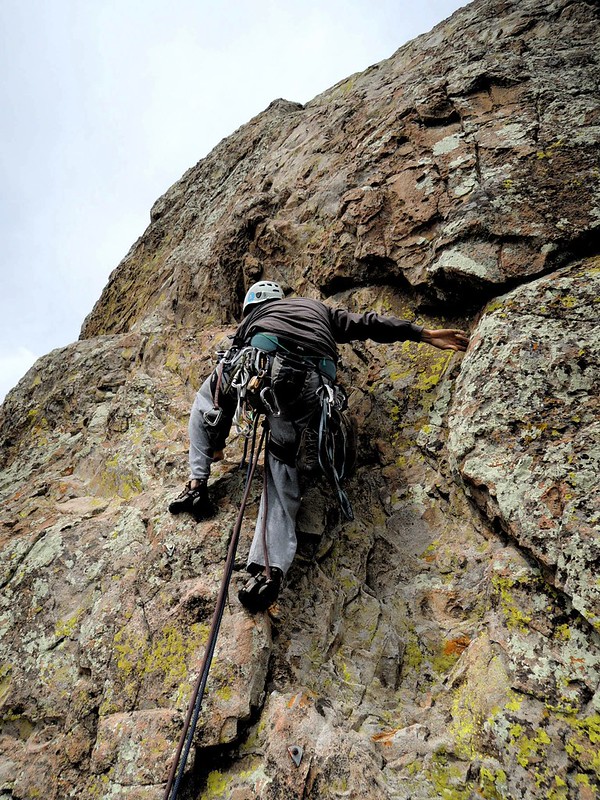 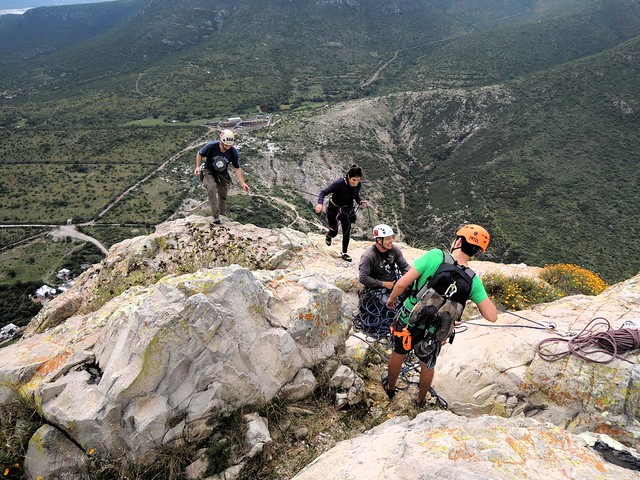 The descent was more exciting than expected.  Some people rappel it.  We took advantage of the beefy metal hand rails drilled into the nearly vertical sections of wall.  It’s a bit like Angel’s Landing (Zion) or the east side of Half Dome in that sense.  Incidentally those two features are also both monoliths, and both seem taller than Peña de Bernal. 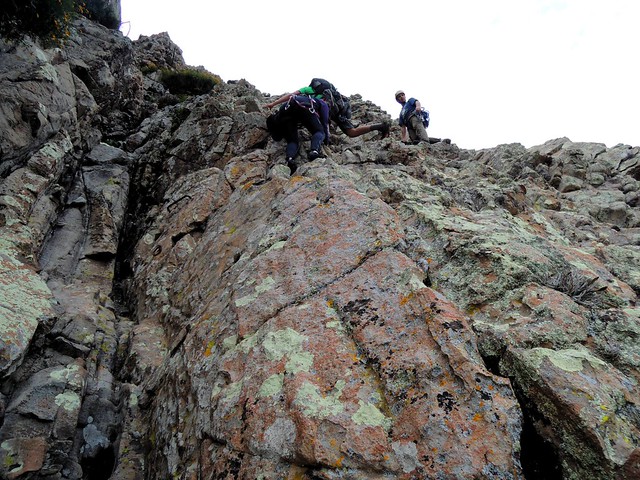 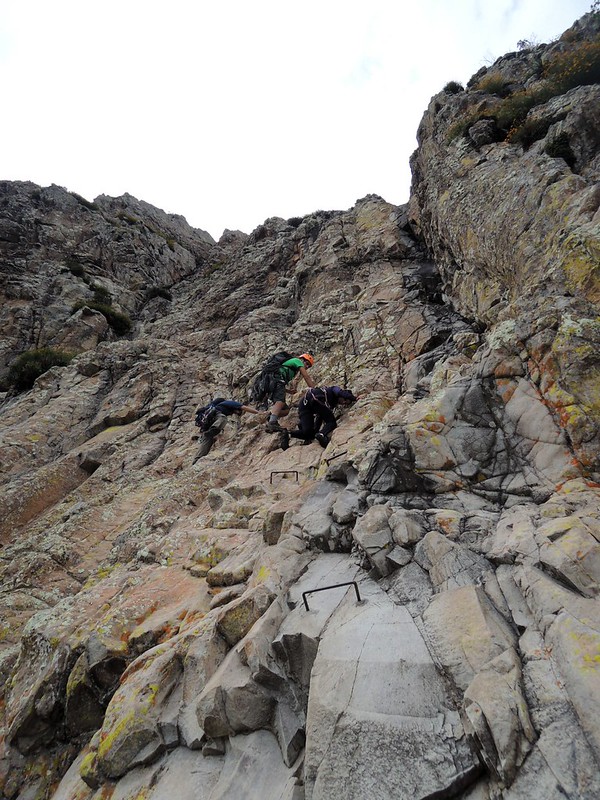 We celebrated our fun day in Bernal with an Italian dinner — pizza, gnocchi, some yummy salads, and a few beers. 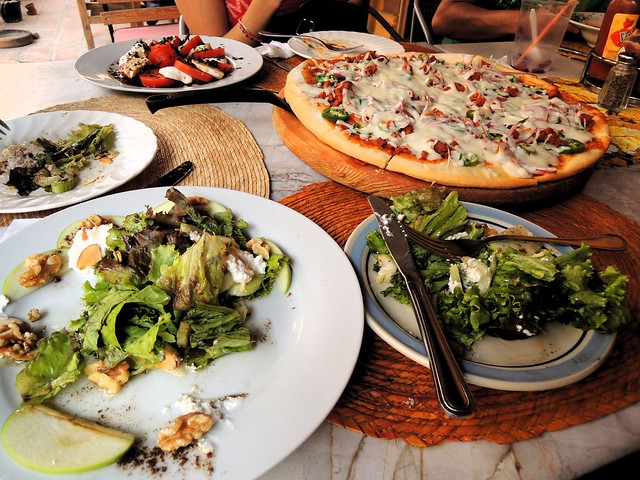 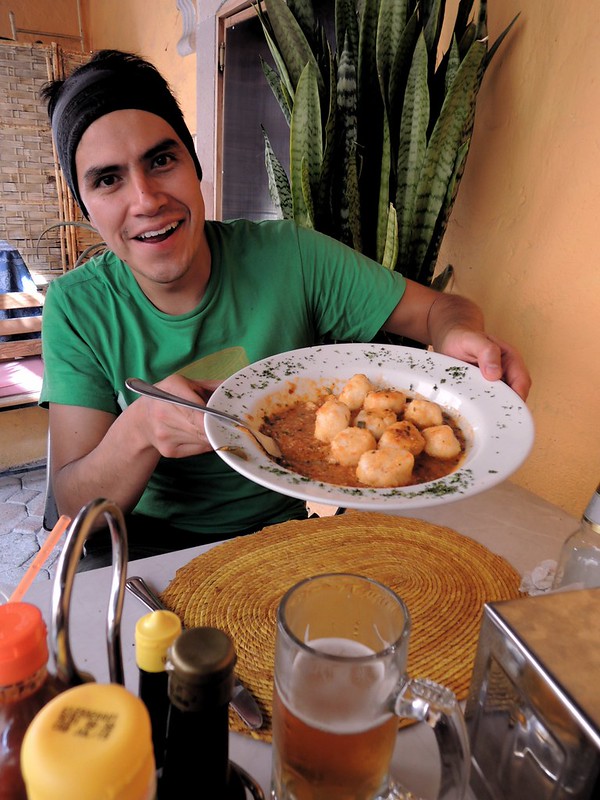 The rain held off until we got back into the Valle de México. 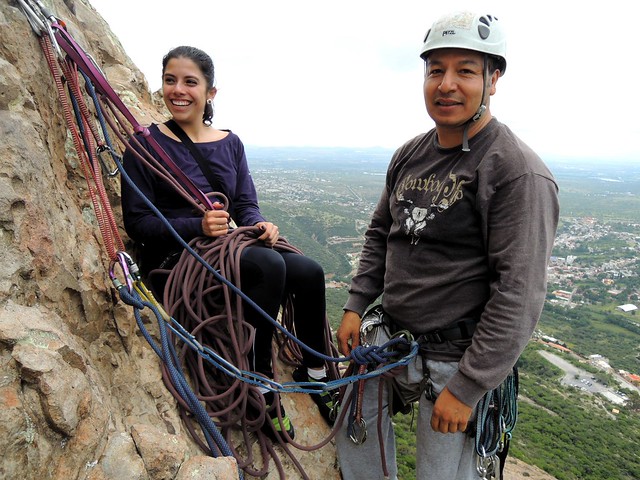 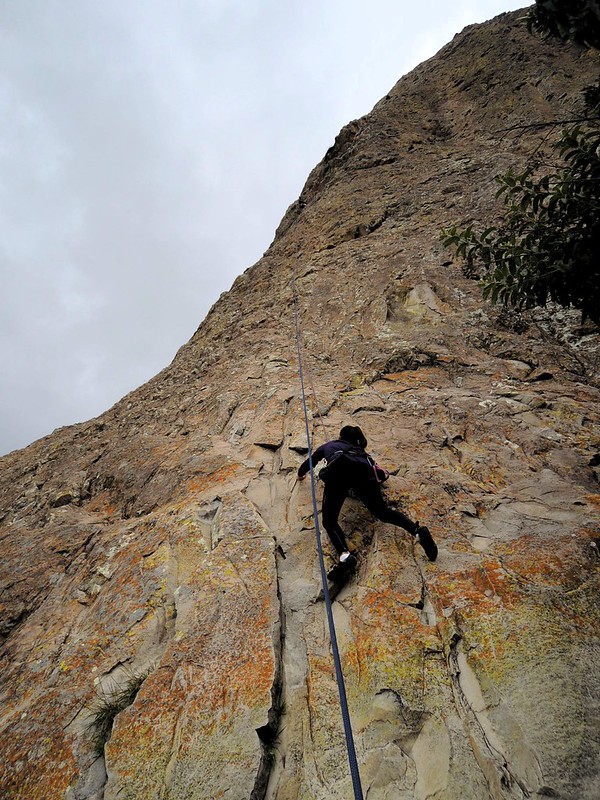 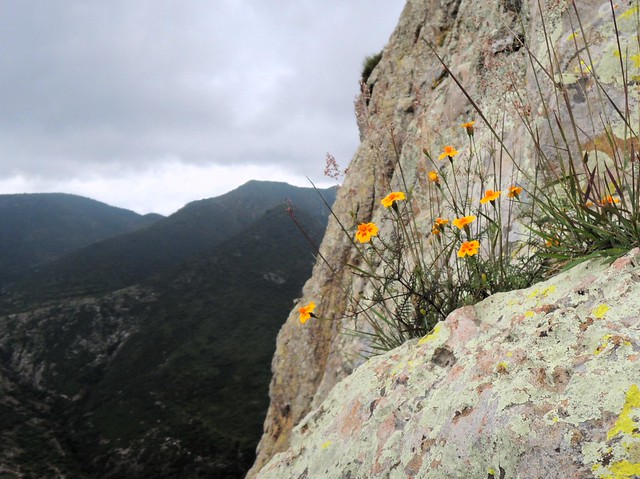 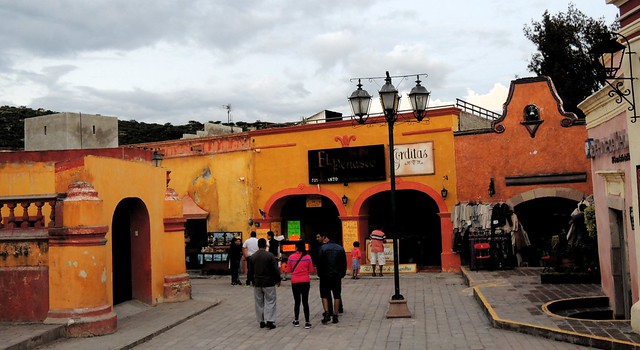 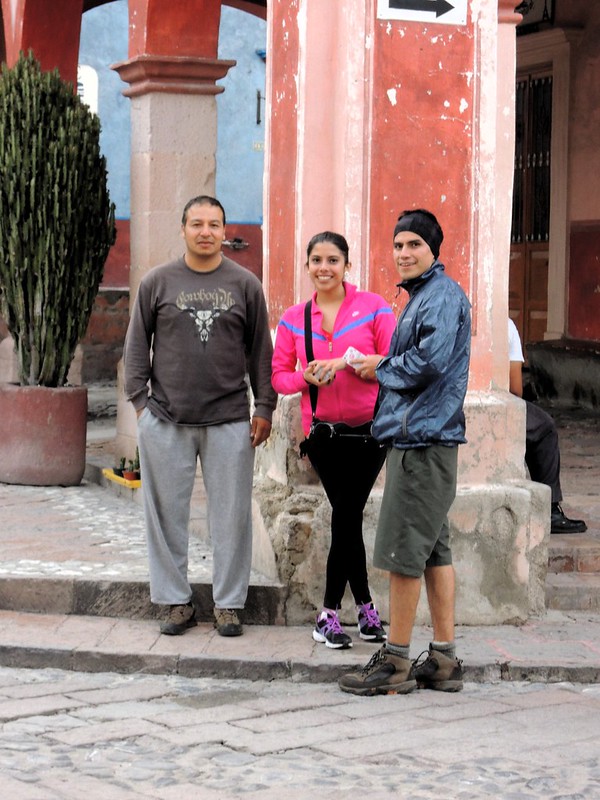 This entry was posted in Climbing, Mexico and tagged Bernal, Mexico City. Bookmark the permalink.