The real reason for my trip across the Atlantic was to help my parents celebrate their 50th wedding anniversary.  We all met in San Miguel de Allende, a city in Guanajuato that none of us except Elise had ever been to before.  San Miguel de Allende isn’t big but has an incredible art scene.  Its historic center is a UNESCO World Heritage Site, attracting wealthy weekend visitors from Mexico City, and the city houses “one of the largest American communities in Mexico,” according to Wikipedia.  Indeed at the Friday Art Walk in Fábrica La Aurora it seemed that most of the artists were from the US. 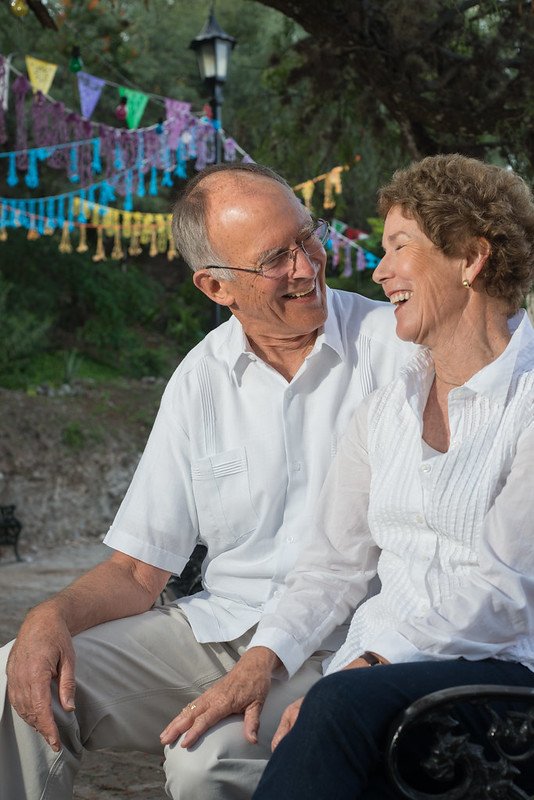 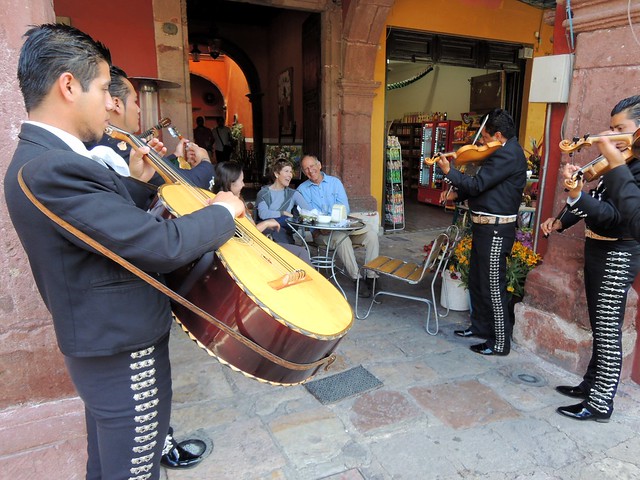 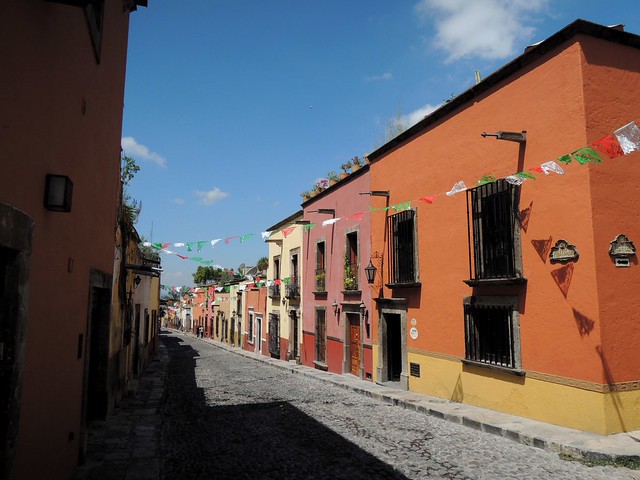 That’s not just a new trend, however.  After World War 2, American artists starting coming to San Miguel de Allende to study at the Escuela de Bellas Artes with Siqueiros (among others).  They found their GI Bill dollars stretched further in Mexico.  In addition to favorable prices when compared to many parts of the US, the climate, Mexican food and lifestyle, and proximity to the US still pull US citizens to charming, hilly, colonial San Miguel. 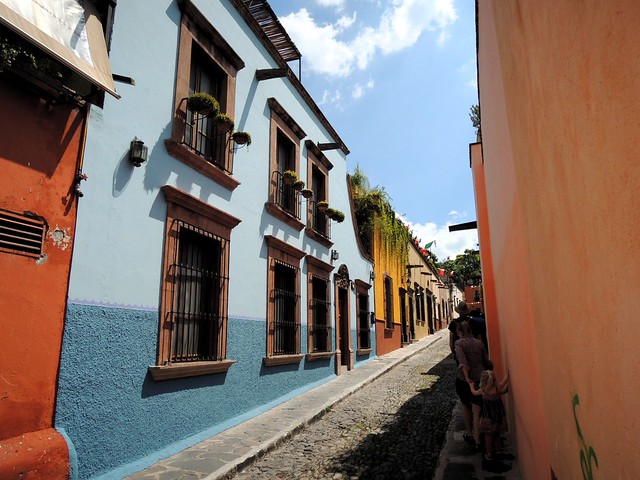 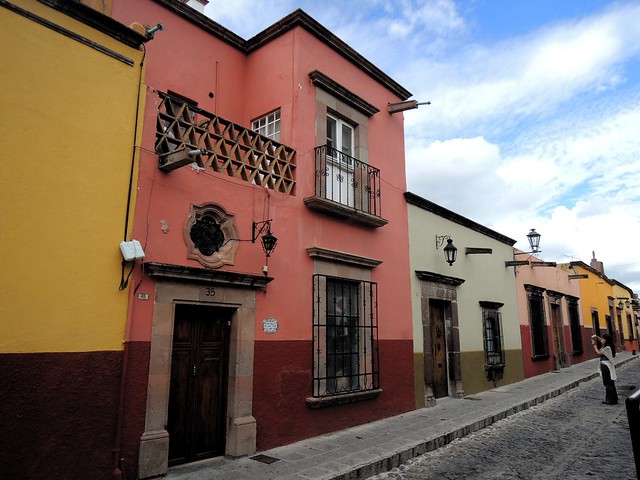 Most of our time was spent wandering through the cobblestone streets, visiting art galleries and shops that could be considered art galleries (I’ve never seen so much art anywhere, except, perhaps, as my Dad pointed out, in Santa Fe), and taking photos of Kevin and Elise’s kids. 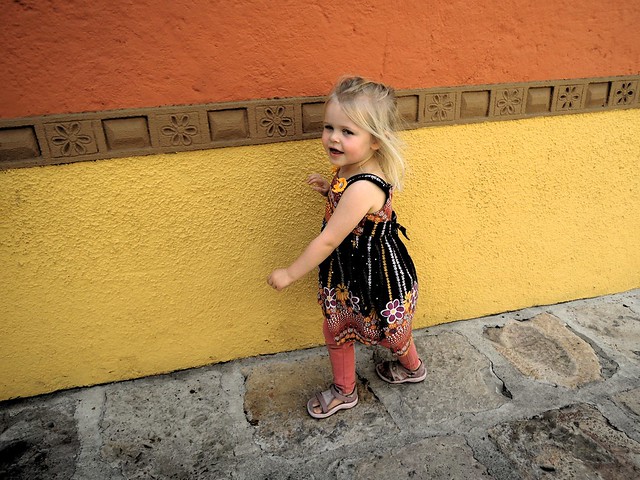 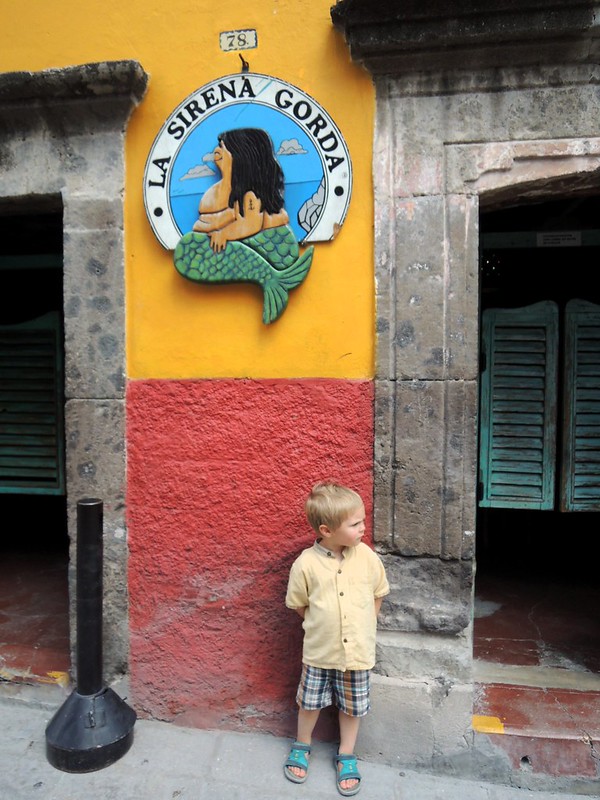 In a week we had three notable excursions: to Atotonilco, to Dolores Hidalgo, and to a bull fight.  In spite of all the time I’ve spent in Mexico, I had never been to a bull fight.  The bullring was just down the road from the house we rented.  On the chilly, slightly rainy Saturday afternoon of the spectacle, I could only convince my Dad to come out and see a few animals killed for the sake of audience enjoyment.  We didn’t have to brave PETA picket lines to get in (though I would have found that secretly enjoyable), but the audience was quite small.  A woman next to us explained that years ago the bullring would have been full for an event like this, but now everyone’s interested in football (soccer), she complained.  After having been to one bull fight, I must agree with the Mexican public on that point — a football match is more exciting. 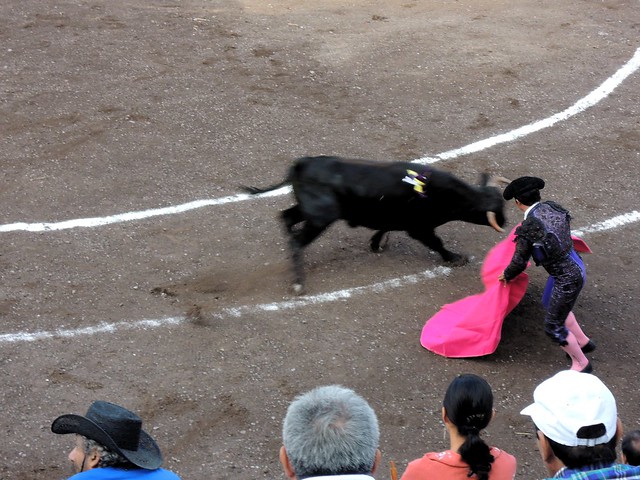 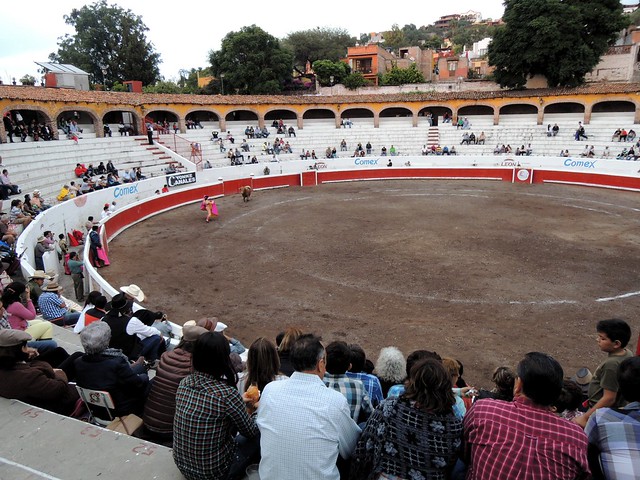 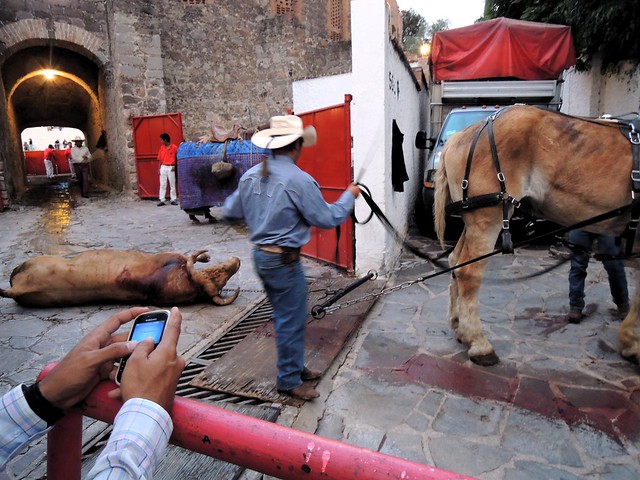 When San Miguel de Allende was added to UNESCO’s World Heritage list (and for that reason removed from SECTUR’s Pueblo Mágico list), Atotonilco was included as part of the World Heritage Site.  The paintings on the church domes in Atotonilco have been compared to those at Sistine Chapel.  Having seen neither I can’t comment on this.  That’s right, even having visited Atotonilco I still haven’t seen the most impressive of the paintings because that part of the church was closed for renovation.  Presumably they’re doing something to preserve this supposedly fabulous cultural treasure…

We saw a couple teasers in the side wings of the church: 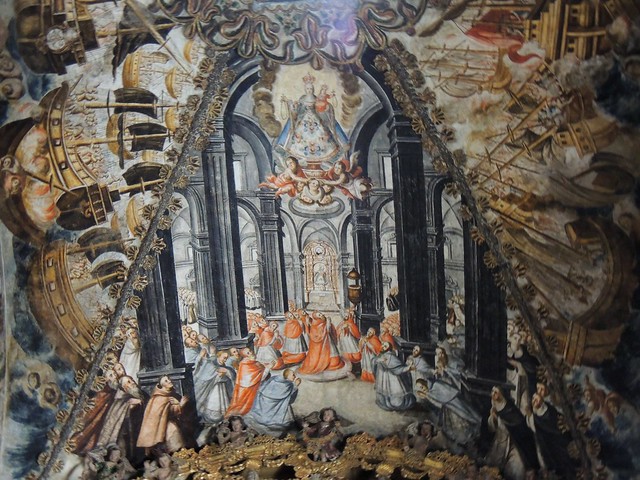 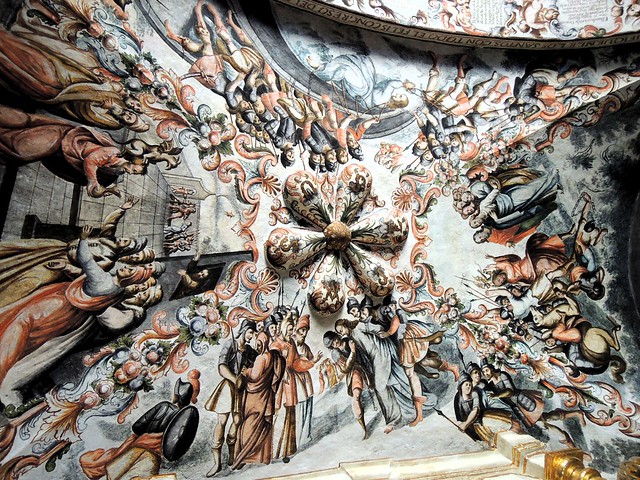 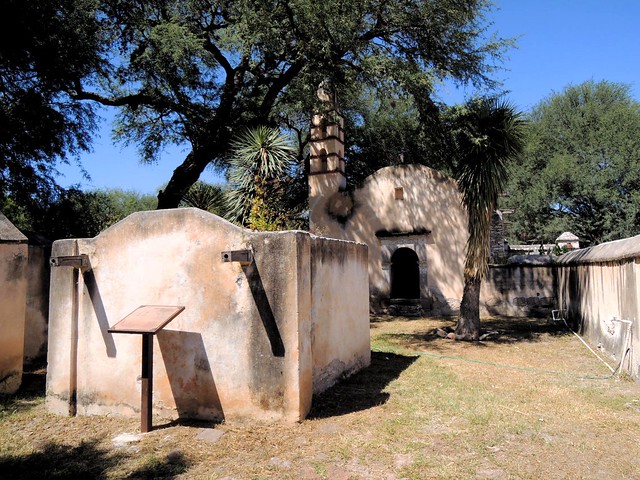 I’ve heard for years about the town of Dolores Hidalgo, the birthplace of Mexico’s independence movement.  It was here where Hidalgo issued El Grito de la Independencía from the steps of the church on the main square.  Incidentally both Dolores Hidalgo (formerly Dolores) and San Miguel de Allende (formerly San Miguel) altered their names after independence to honour the hometown independence heroes.  There’s not really much to see in Dolores Hidalgo, but my Dad and I had a nice tour with Juan José who detailed the events leading up to El Grito on the morning of September 16, 1810. 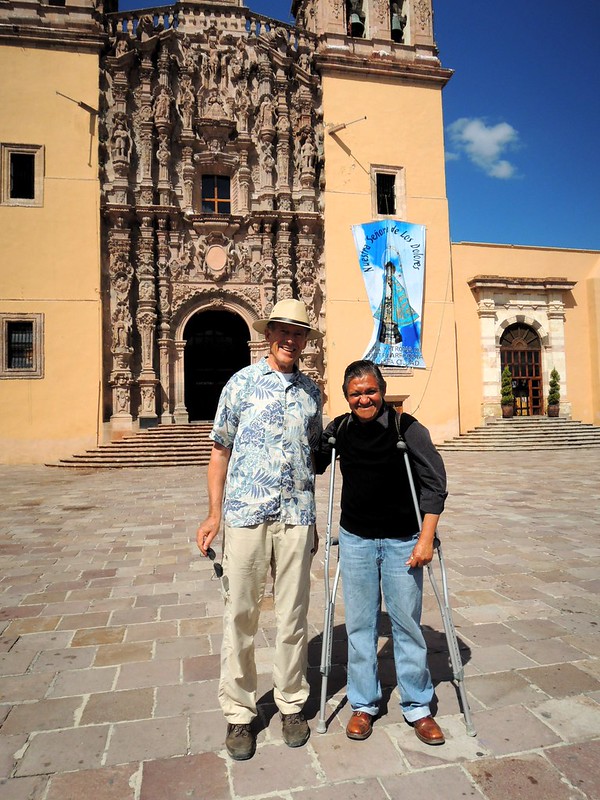 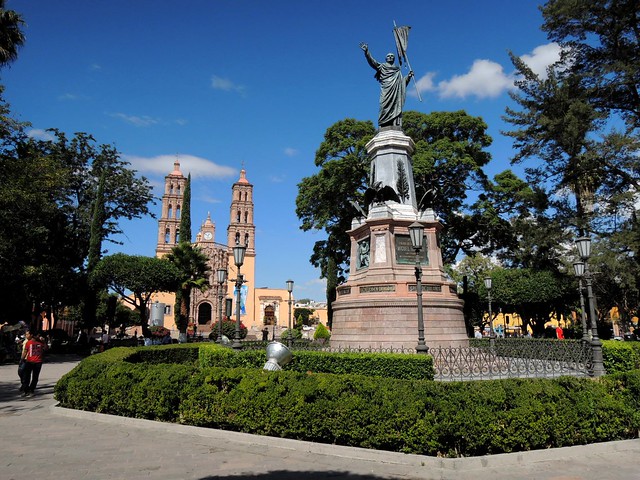 On one of our last mornings in San Miguel, we spent a fun hour and a half with a professional photographer.  We can thank Elise and Megan for organizing the photo shoot as the 50th wedding anniversary present for my parents. 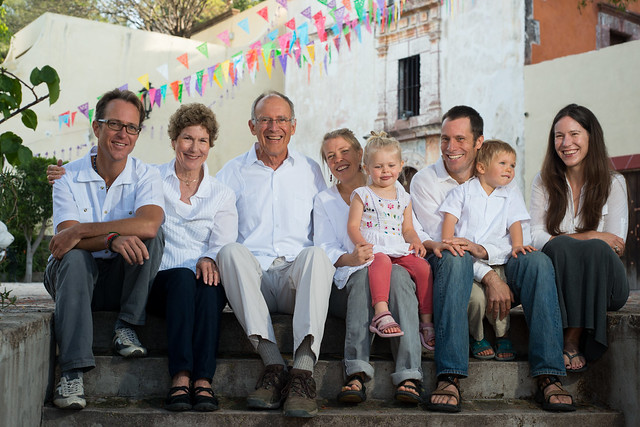 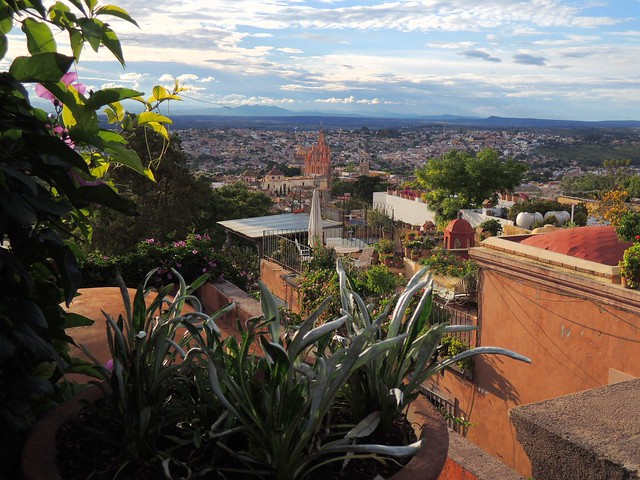 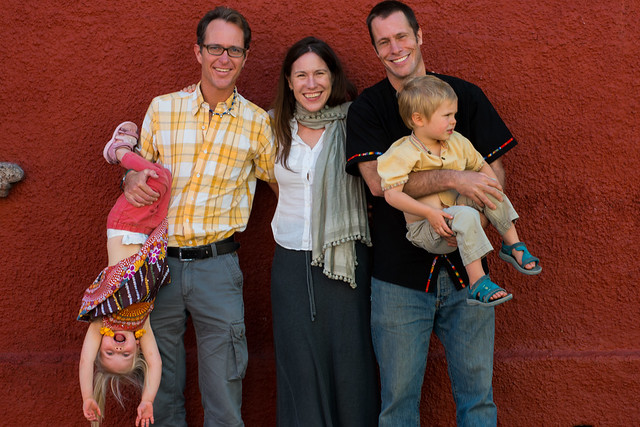 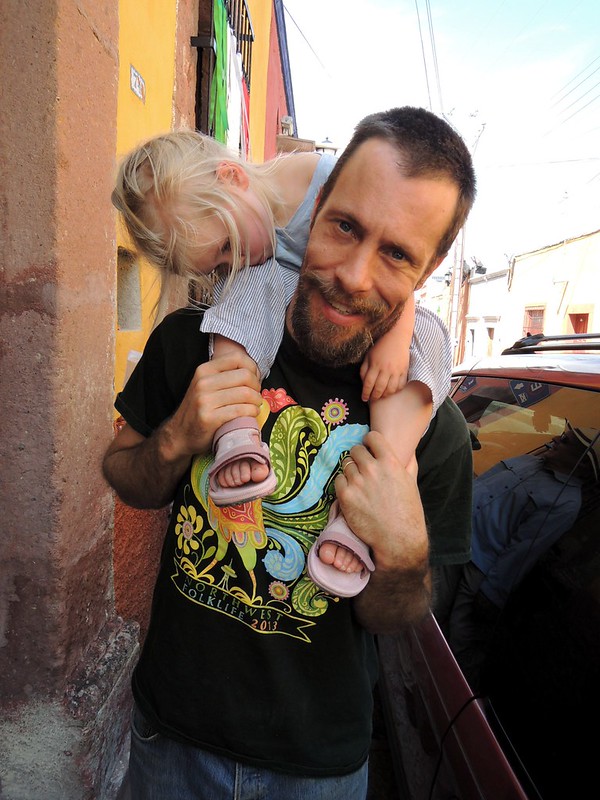