A couple sites near Antalya, Termessos and Aspendos

My parents spent about a week of their three weeks in Turkey, in Antalya, staying in Kaleiçi, the fun, old part of the city.  We did some of the usual touristy things here such as enjoying the views of the mountains across the bay, admiring heaps of Roman statues (mostly from Perge) at the archaeological museum, and, a first for me, checking out the small Kaleiçi Museum.  That museum houses some old photos of Antalya and also a small, restored church.  Upstairs in the church was a super display of photos from 1860s Turkey of all sorts of street sellers — ice cream, carpets, milk, eggs — everything used to be sold right on the street.  There were even cotton fluffers, and one of the most interesting to me were the people who buried (or covered?) the snow in the mountains in the winter to keep it from melting.  Then in the summer they’d take the snow from the mountains to the city, cut it, and sell it for people to use in their ice boxes!  It’s a good little museum, and I’ve already been back for a second visit.

Of course we enjoyed some good meals.  One day we enjoyed quick pizzas and beers next to the picturesque yacht marina at my friend Ahmet’s place.  We had a fish and rakı dinner at Volkan Hamsici next to the stadium — one of the places that Ferda and I have been to a few times.  And check out this spread that Tülin and Ferda put together for us one night: 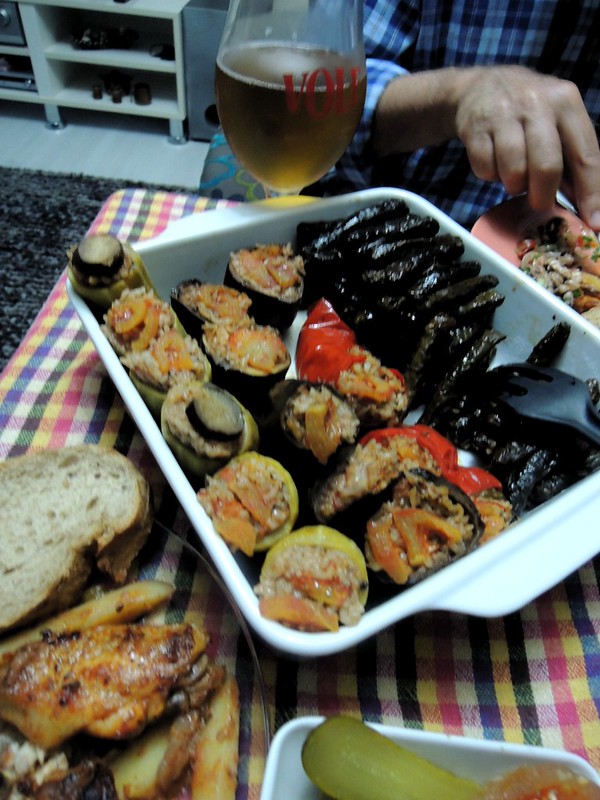 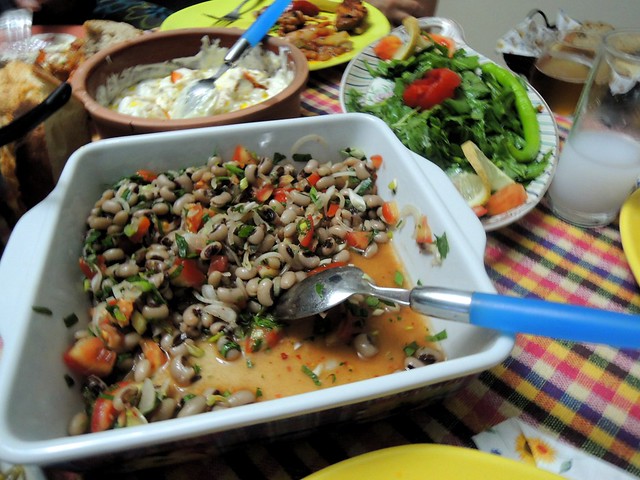 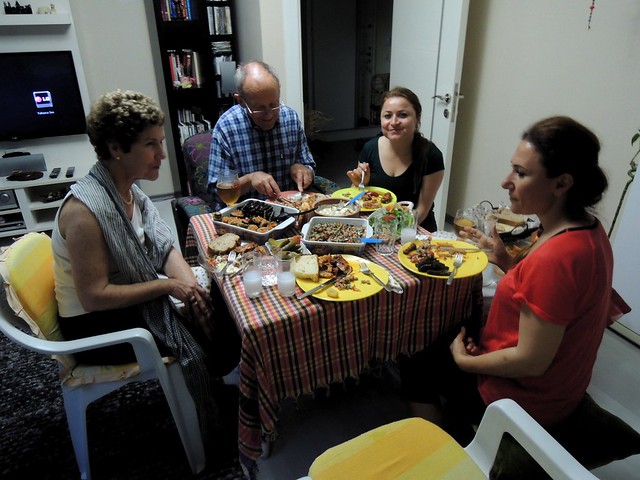 Our two big excursions from the city were to Termessos, one of my favourite ruined cities in Turkey, and to Aspendos, a place I had never been to before.

The highlight of Termessos are the two cemeteries (I actually think they use the word necropolis) which are literally littered with carved stone sarcophagi (lahitler). 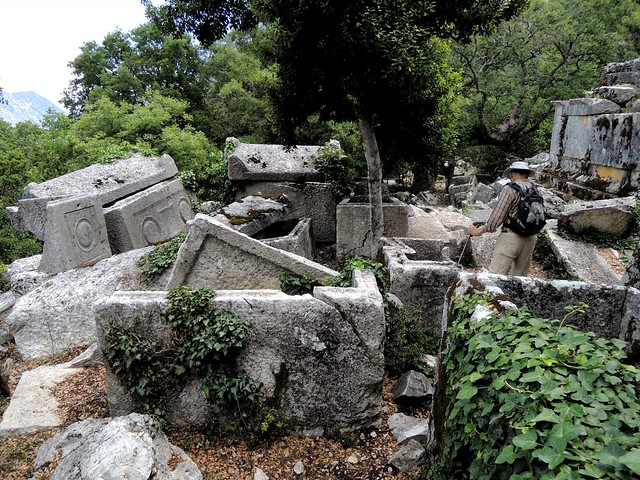 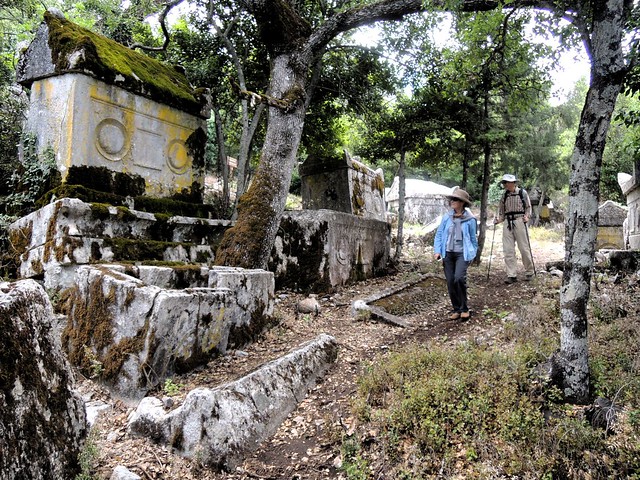 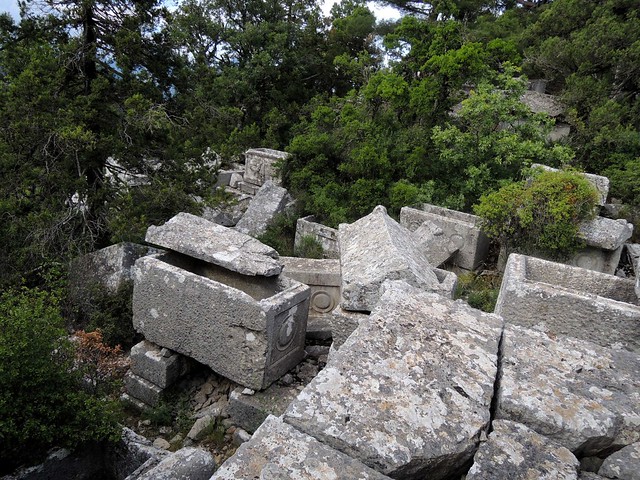 We made it all the way up to the fire lookout at the top of the hill where we met Sami who invited us in for tea.  This was great because after tea he took us to some of the best preserved sarcophagi on the site, an area I hadn’t been to before.  We also learned about the dog sarcophagus which we later saw at the Antalya Museum (and I don’t have a photo of). 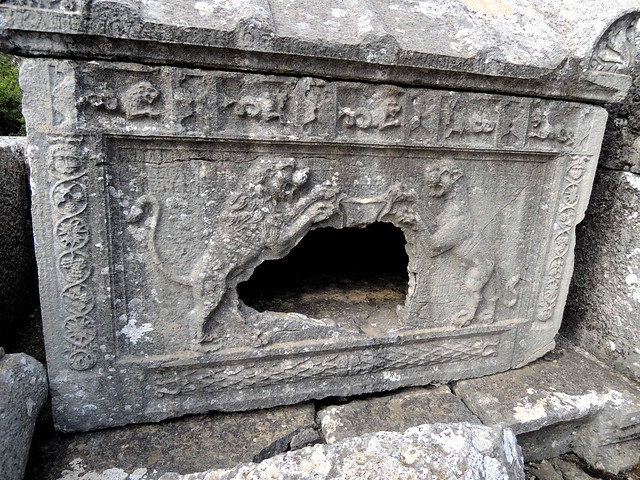 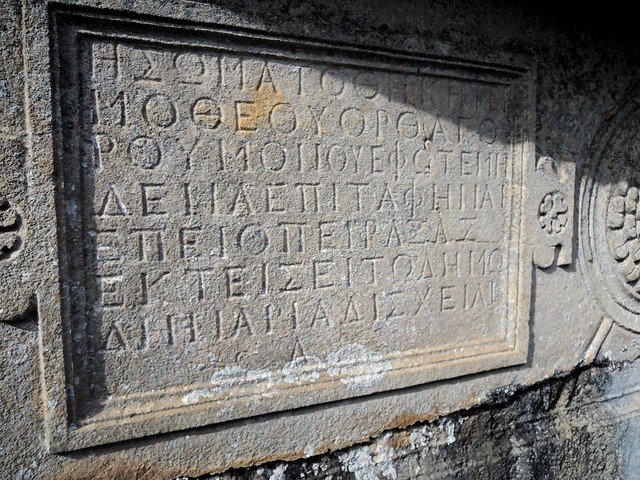 The theatre at Termessos isn’t bad either. 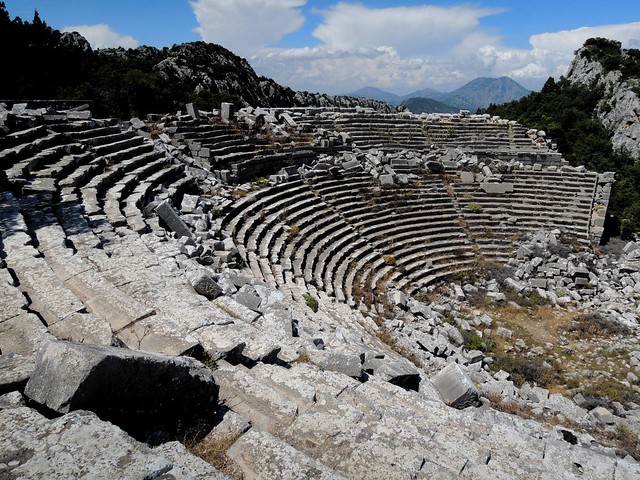 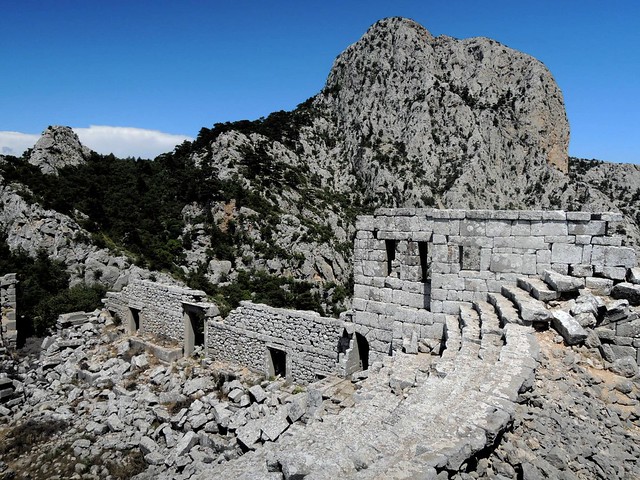 The other site we visited near Antalya was Aspendos, well-known because its well-preserved theatre is still used for performances today.  Or it was a couple years ago.  For now the performances are on hiatus while they do some restoration work.  They expect to be going again next season. 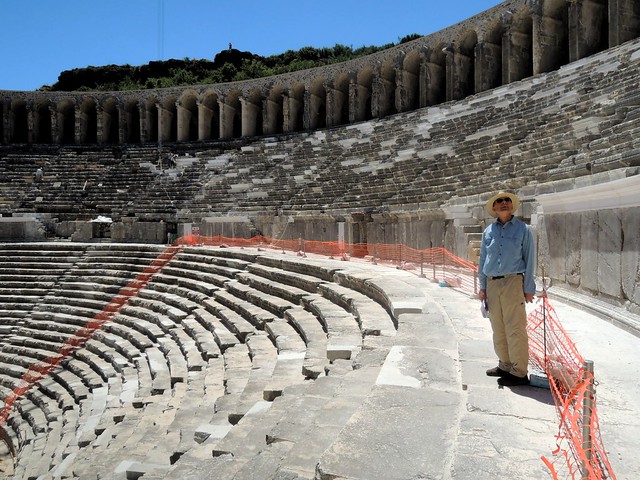 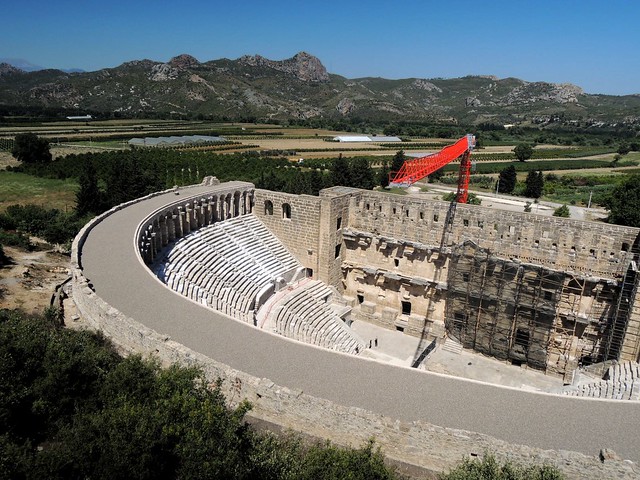 The theatre was actually less interesting than I expected (the modern crane used for the restoration work probably didn’t help), but I was pleasantly surprised by some of the buildings on the acropolis above the theatre including partial remains of what must have been an incredible aqueduct bringing water from nearby hills to the acropolis.  If you do bother going to Aspendos, I can highly recommend Ali Yılmaz’ Aspendos Büfe for gözleme, a savory Turkish treat not unlike quesadillas.  This was my parents first gözleme so I was happy to luck out and find a good place. 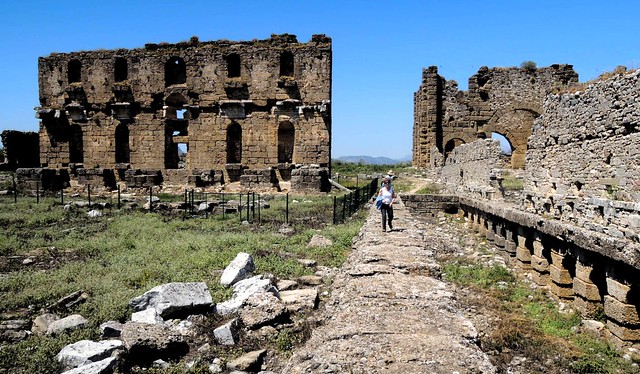 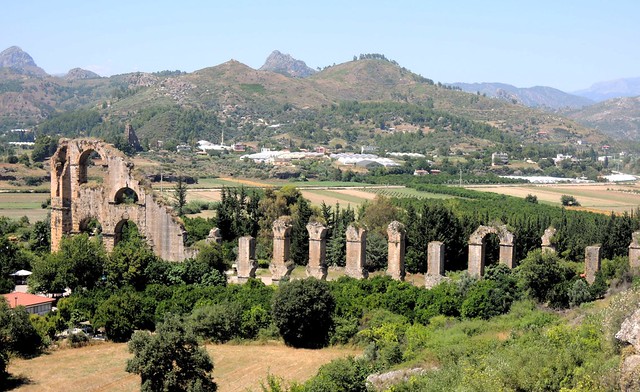 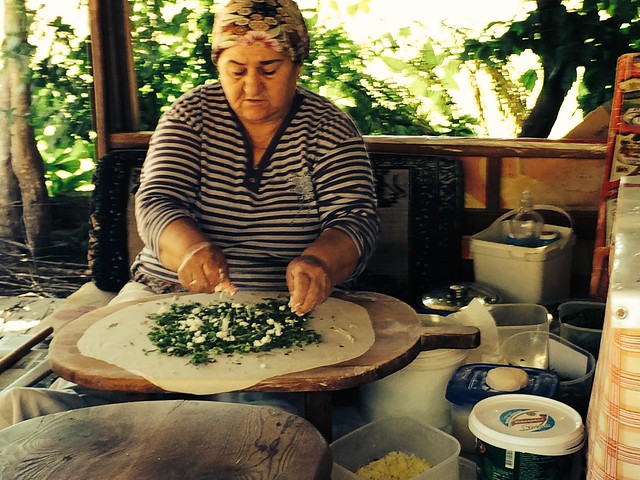 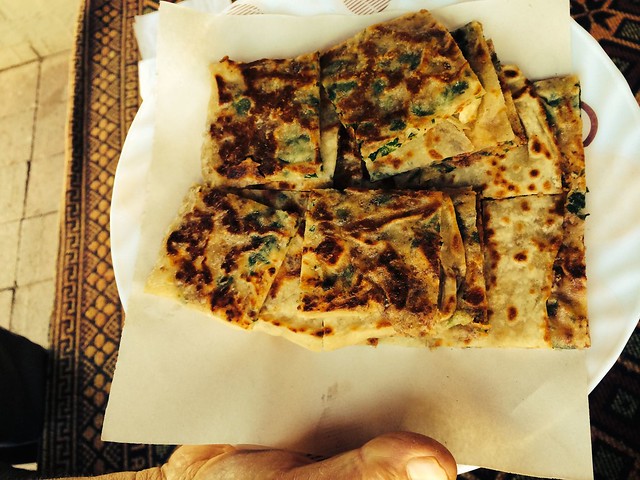 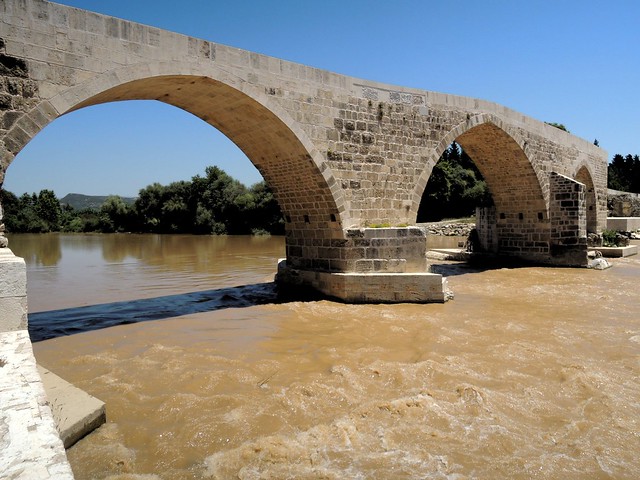 And back to Termessos: 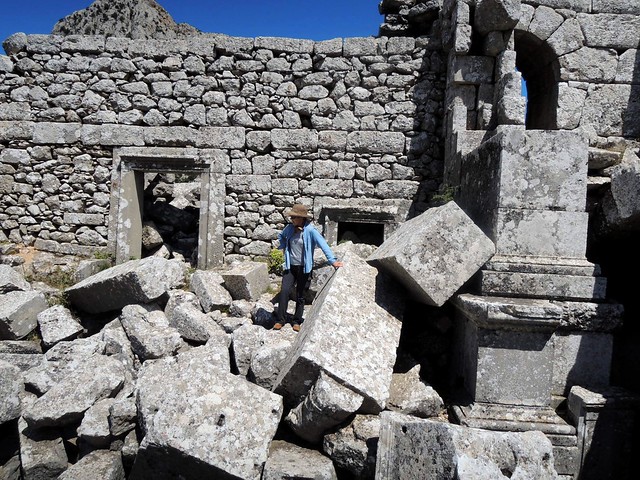 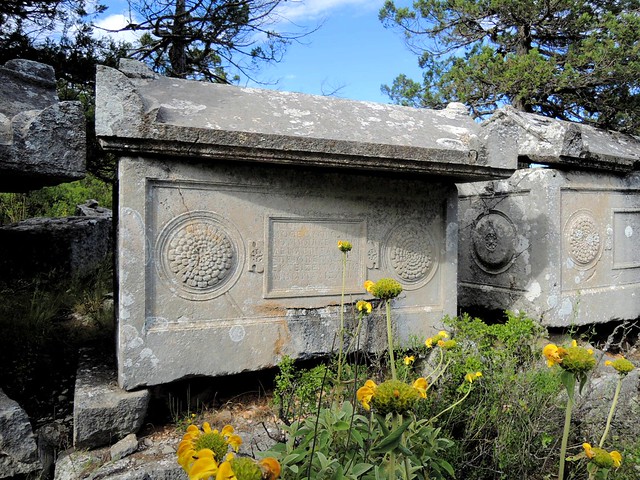 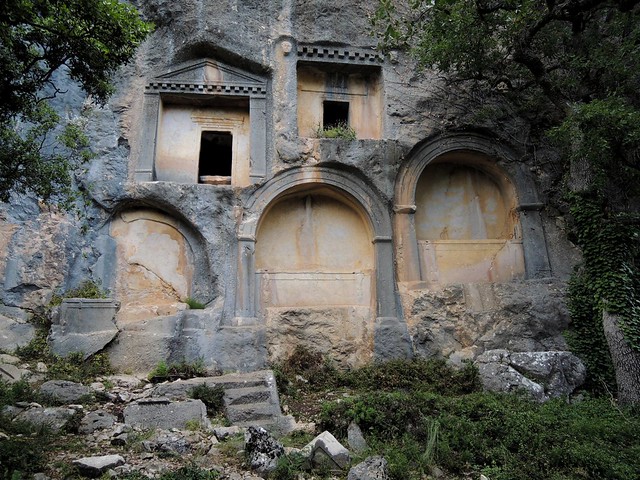 This entry was posted in Traveling, Turkey and tagged Antalya, Aspendos, Termessos. Bookmark the permalink.

3 Responses to A couple sites near Antalya, Termessos and Aspendos