Auto-touring southwestern Turkey with my parents

For my parents’ last week in Turkey, we rented a car and did a little road trip west of Antalya.  I planned the itinerary, so it included more ruins than most people can handle in a week — Arıkanda, Myra, Xanthos, Patara, Aphrodisias, Hierapolis.  Try to keep all those straight, and we had just visited Termessos and Aspendos the week before.  Since they’re my parents, they didn’t complain, and my Mom even kept good enough notes to pass the test at the end of the week.  Most of these are Likian (Lycian) sites so rock-cut tombs were once again a highlight.

It wasn’t all old rocks, however.  Ferda joined us for the first half when we returned to Adrasan, one of our favourite beach places.  Then we had two nights at the restored stone houses in Beymelek with Osman and his family.  Ferda took the dolmuş back to Antalya from there so she could go back to work.  My parents and I continued on to Gelemiş, visited the beach and beautiful sand dunes there, and I returned to Denizli for the second time to show my parents Pamukkale, Kaklık Cave, and Salda Lake.  It seemed like a good and varied itinerary to me even with all the ruins.

The place we stayed in Adrasan has tables set in the middle of the small stream in the summer.  Usually you’re sitting above the water, but for fun (and photos) one small table is actually in the stream.  Just a 5-10 minute walk away is the beach and bay. 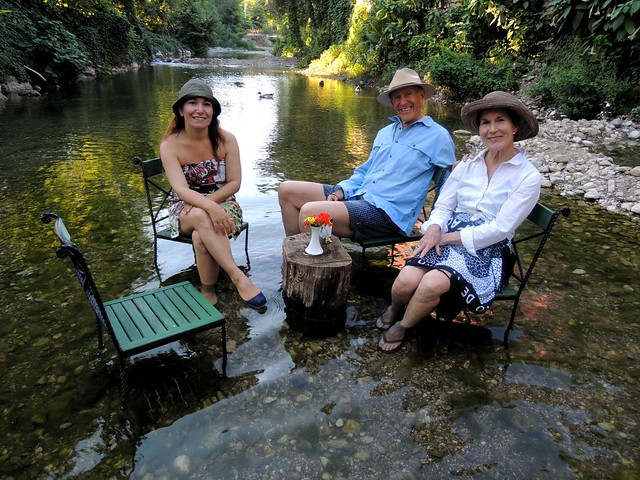 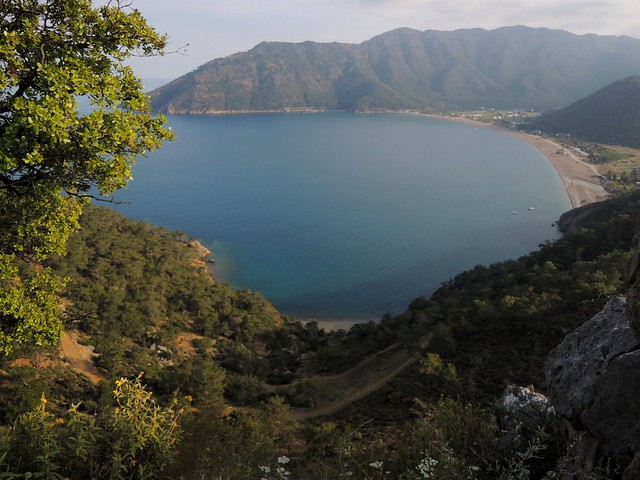 On the road between Adrasan and Beymelek we stopped and spent a couple hours at the ancient city of Arıkanda.  The city was built on five terraces on the slopes of a steep mountain.  It sounds like it could be well-defended, but if I remember correctly, the peace-loving, hedonistic inhabitants were quick to surrender to invading armies. 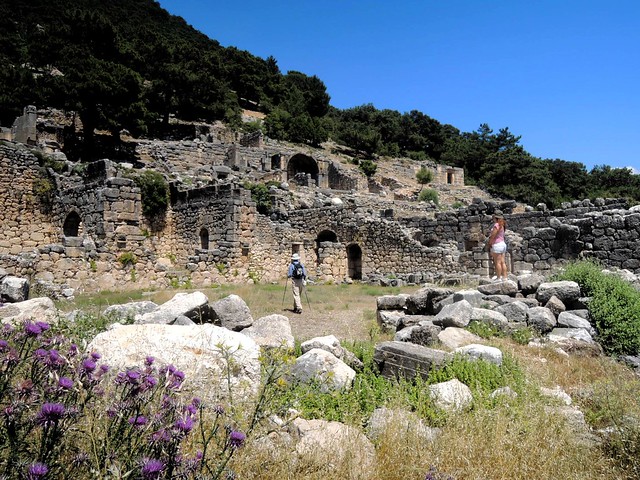 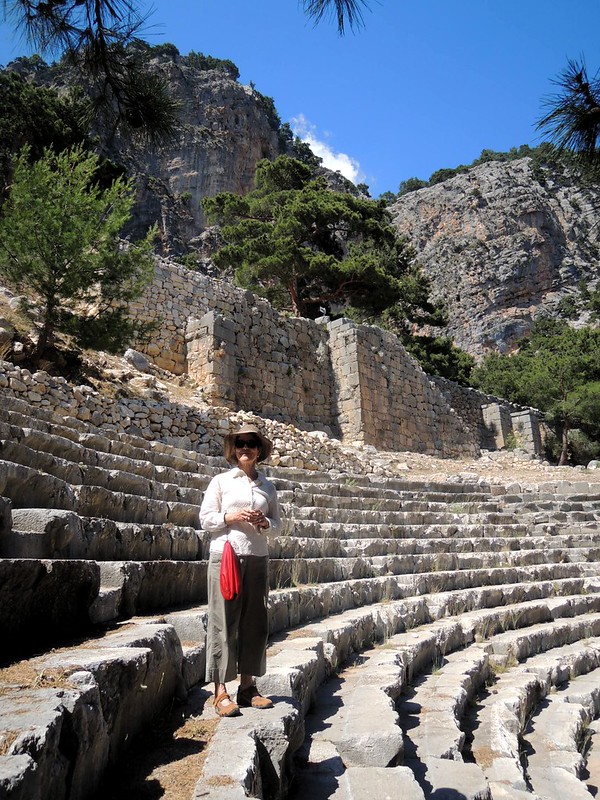 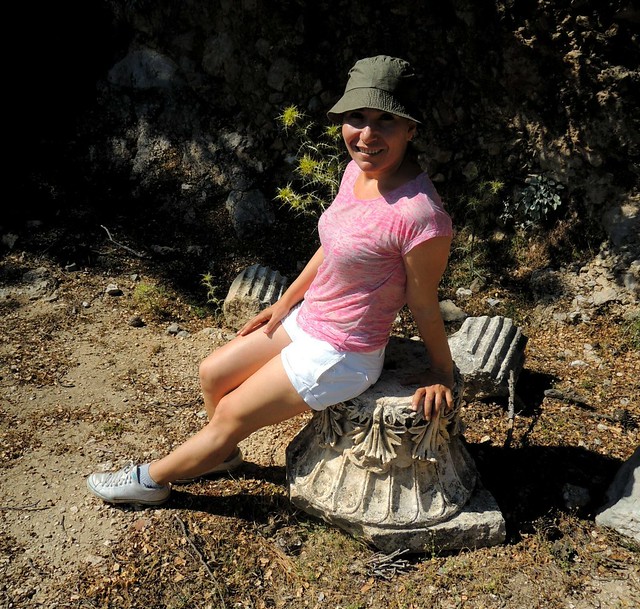 That evening we arrived in Beymelek where Osman was the mayor for many years.  He organized the stone house restoration project and has done a lot to promote tourism in the area, including publishing the Saint Nicholas Ways book about the old churches in the area.  He and his wife’s hospitality and excellent breakfasts made our stay. 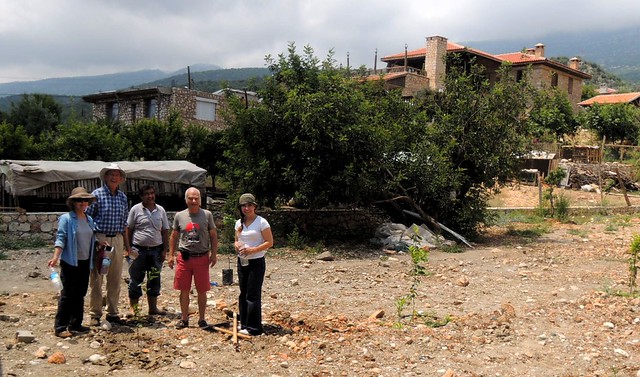 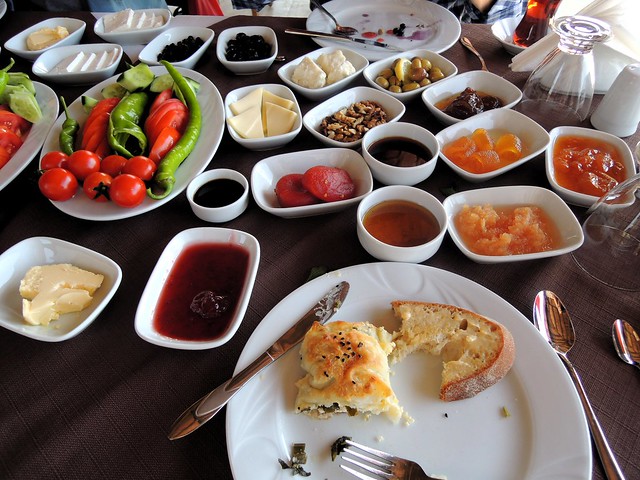 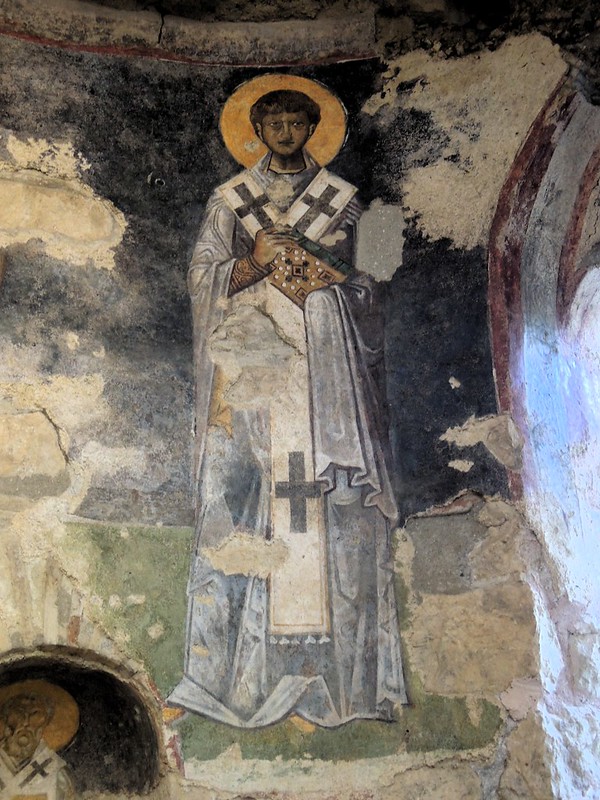 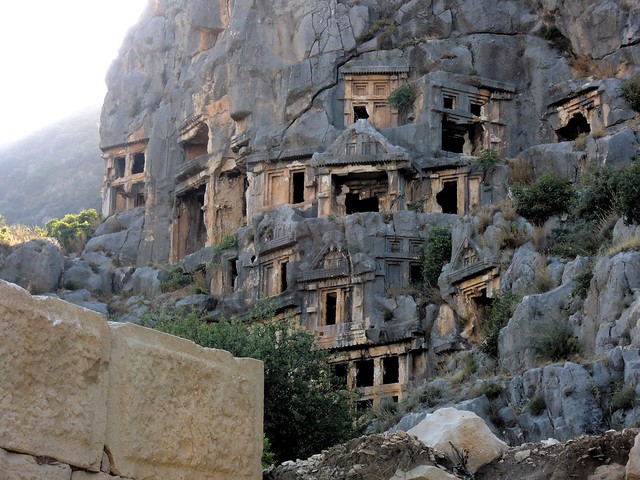 Osman also took us to the restored towers of İsion (Sion?). 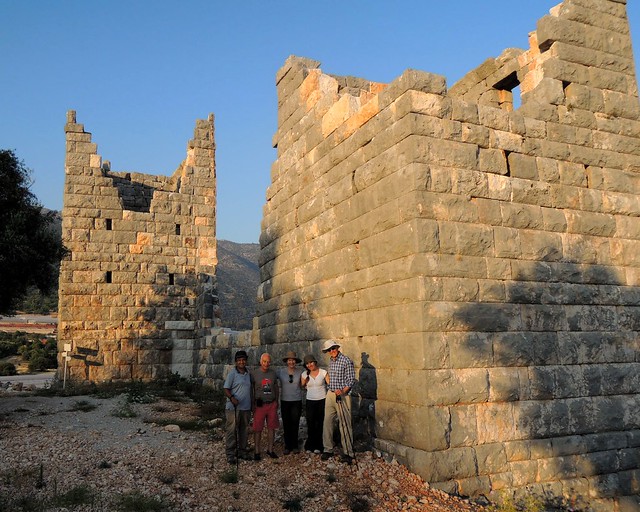 We said goodbye to Ferda and set off for Xanthos, one of Turkey’s few UNESCO World Heritage sites.  I guess the best stuff from here is now at the British Museum in London, but the tower-like rock tombs are kind of baffling. 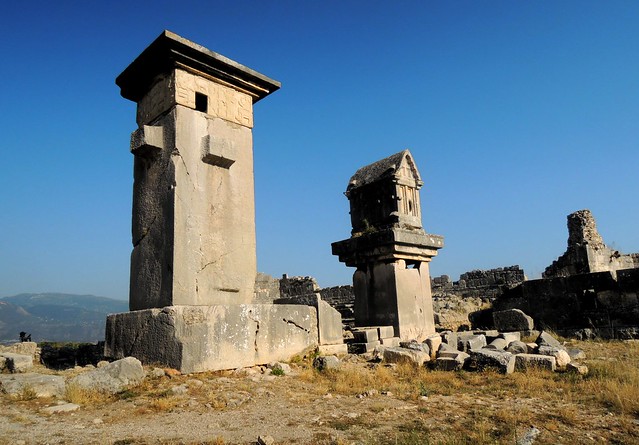 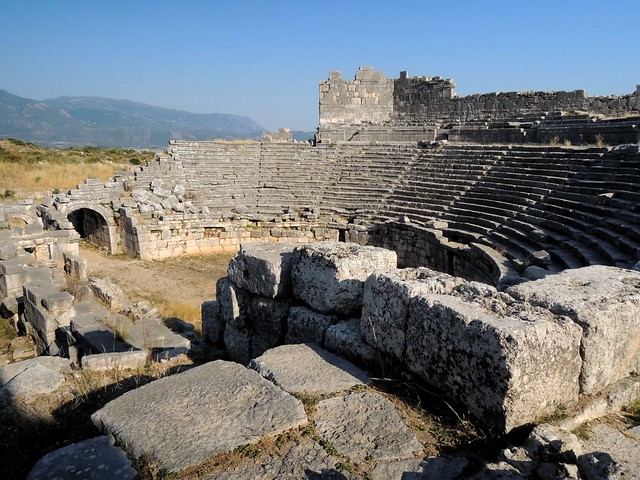 We stayed at nearby Gelemiş which is itself next to ancient Patara, known for being the capital of the Likian League, the world’s first democratic union.  The drafters of the US constitution used the Likian League as an example if you believe the (New York Times) hype.  My favourite part of our stay at Gelemiş was Kum Tepesi, the local sand dunes. 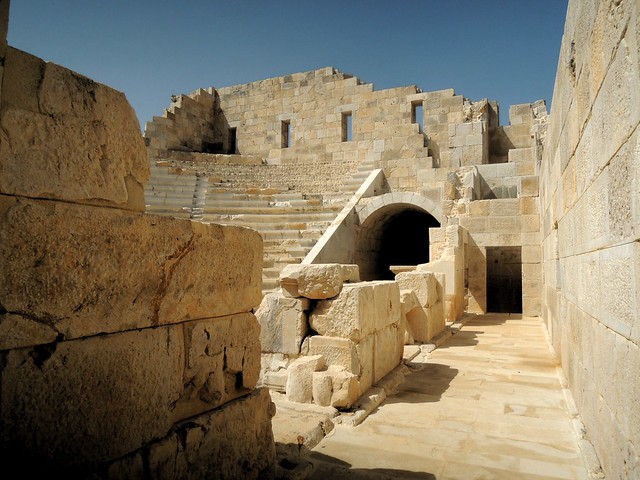 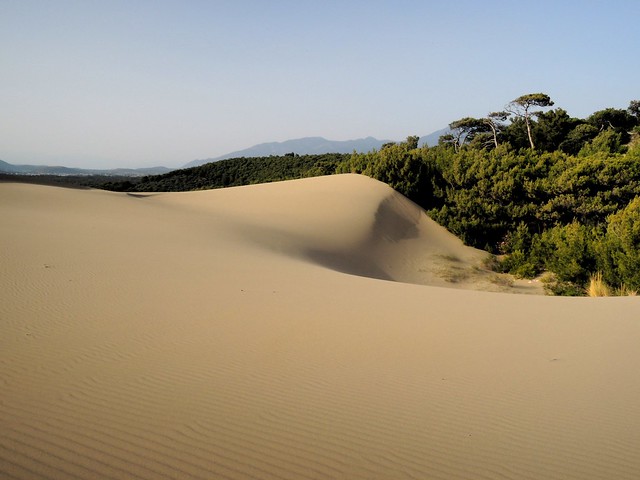 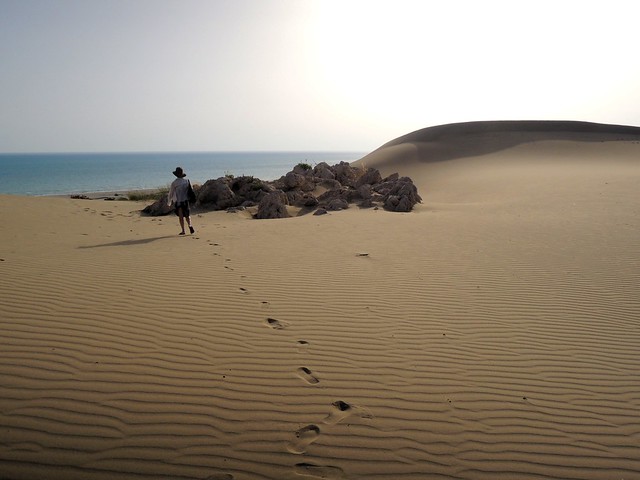 I know, I know, another ancient site, but Aphrodisias is super.  Known for its sculpture (think more rock tombs) and cult of Aphrodite, it now has a terrific museum right on site.  You don’t need to go to London (Xanthos), Berlin (Pergamon), or Antalya (Perge).  The rich sculpture of Aphrodisias is (almost, not literally) in situ.  The highlight could be the tetrapylon, or the 30,000 person capacity stadium (270m long!), or maybe the snakes that we saw mating between the two. 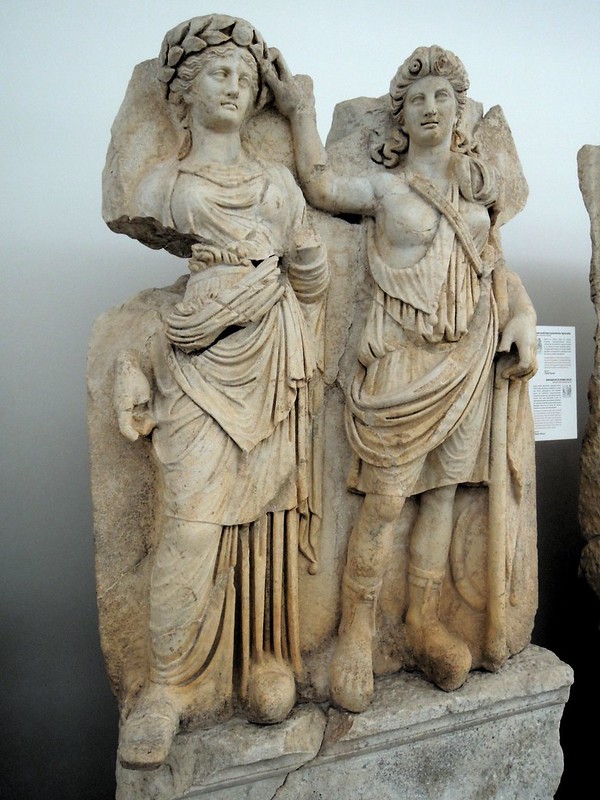 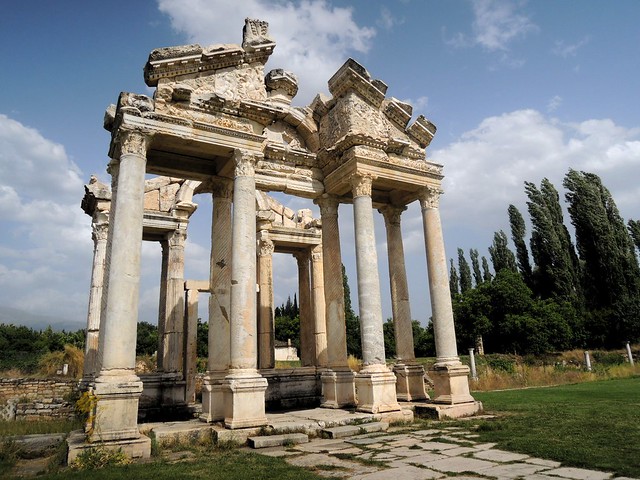 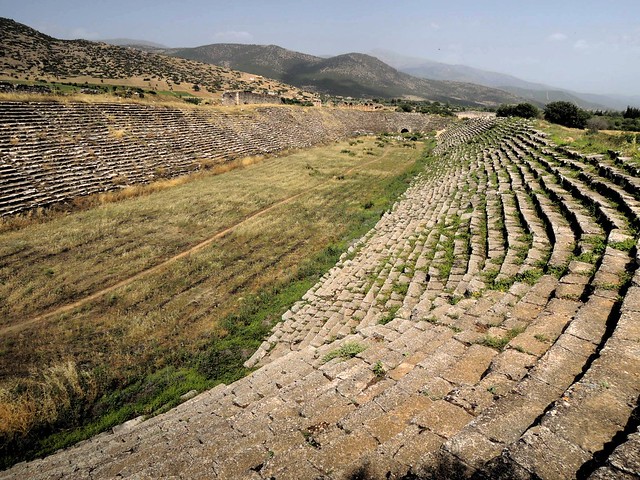 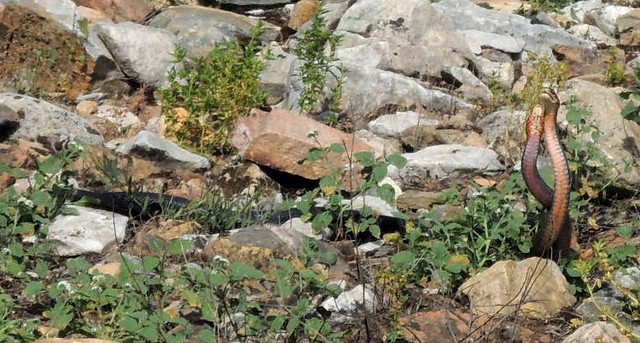 Our last overnight stop was Pamukkale, famous for the snow-white calcium deposits and the ancient city above, Hierapolis. 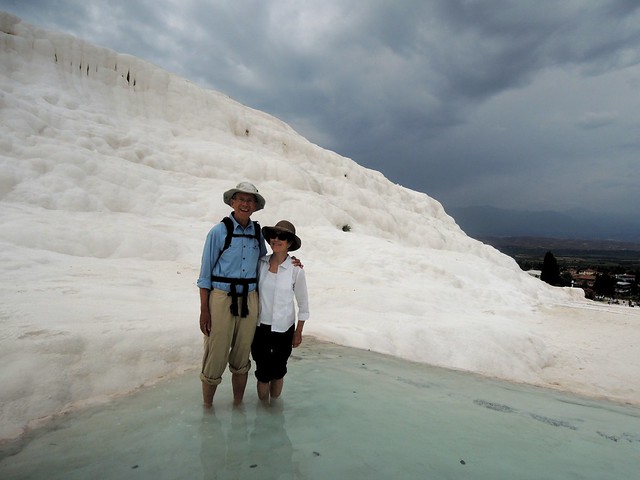 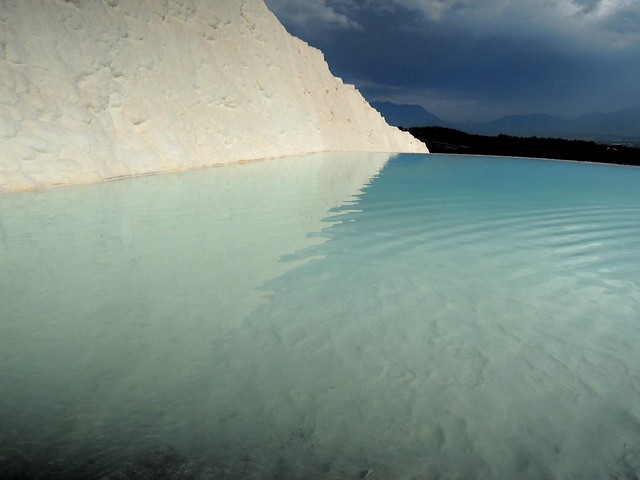 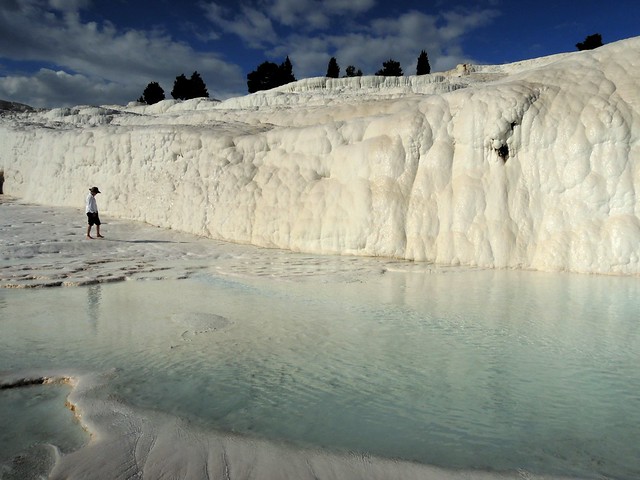 Ferda and I toured the stadium and some of the upper ruins when we visited Hierapolis.  We skipped those this time and opted instead for the necropolis and a 30-minute epidermis-eating session with kangal balığı (doctor fish). 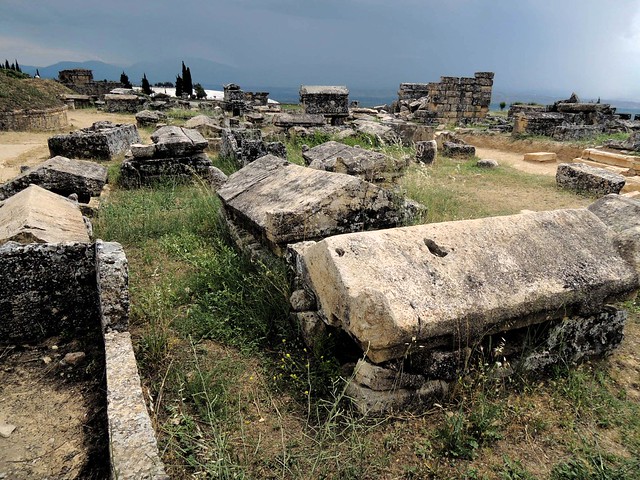 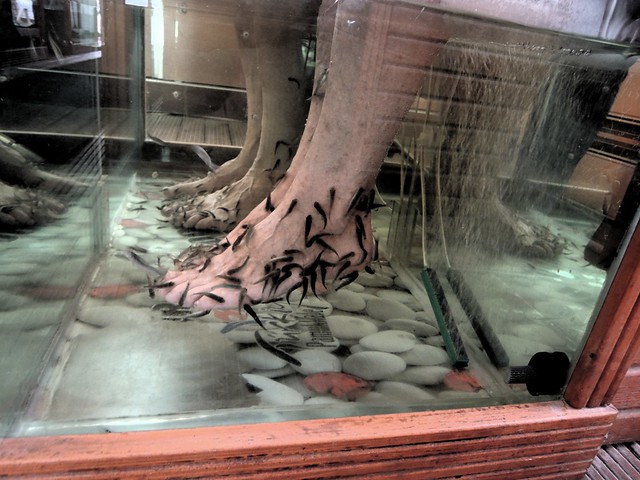 We broke up the final drive back to Antalya by stopping in Kaklık to visit Zeki and Meryem who hosted me when I biked through Kaklık a year earlier. 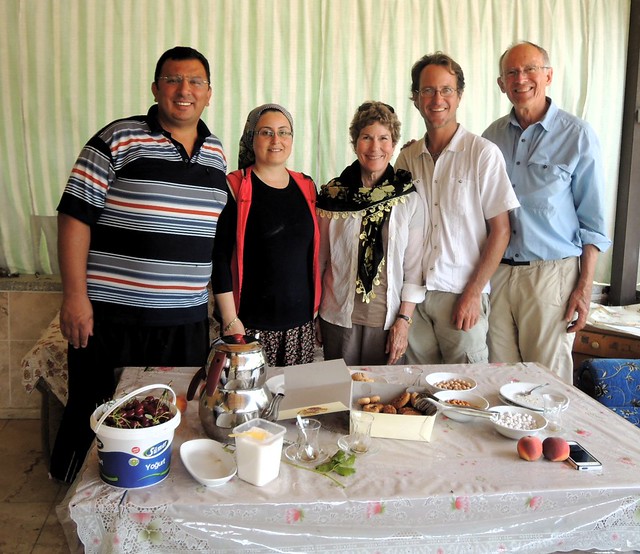 And to prove that Turkey is more than just old ruins we visited the geologic wonders of Kaklık Cave and Salda Lake. 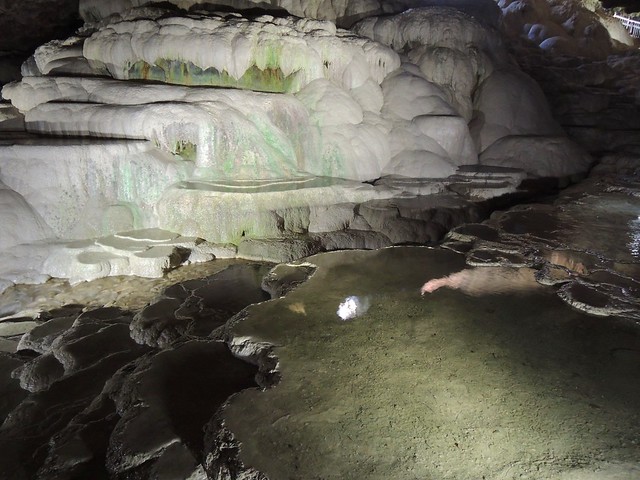 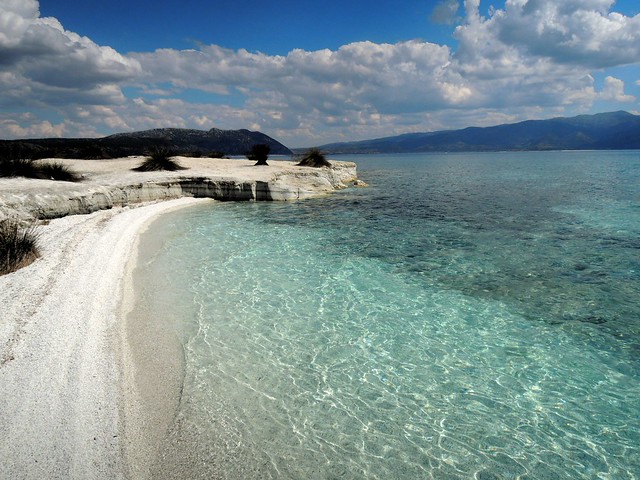 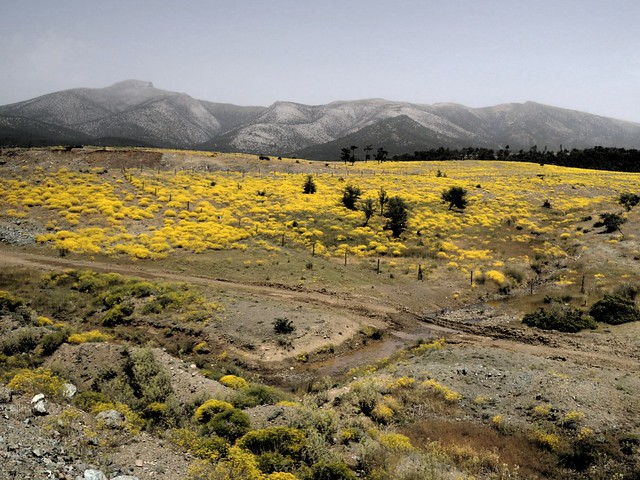 After three weeks in Turkey, I think my parents have a better understanding of why I like it so much. 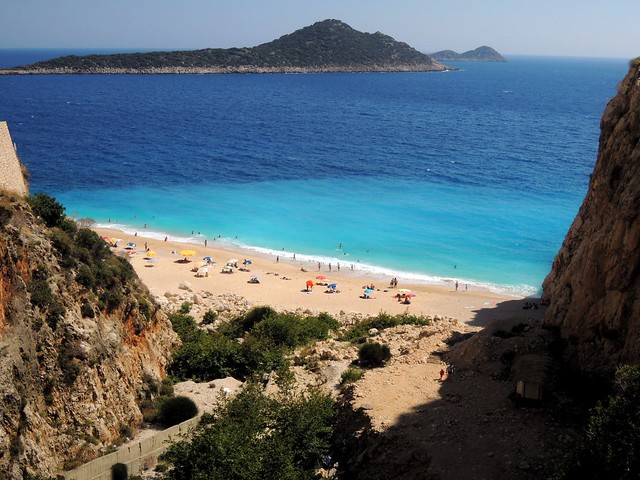 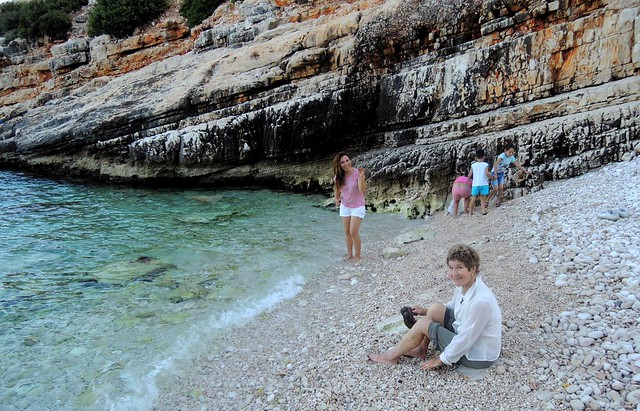 1 Response to Auto-touring southwestern Turkey with my parents