In April of this year (2014) Turkey passed a new law, changing how foreigners get and extend visas.  The extension process is more complicated and more expensive than before, and at the beginning no one seemed to know what they were doing — how really to implement the new law.  It’s just an excuse, but instead of dealing with the bureaucracy, I decided to go to Georgia and see if I could simply get another tourist visa when I reentered Turkey.

The real goal was to climb Mt. Kazbegi (Kazbek), a peak that I admired with my parents from Steppantsminda two years ago. 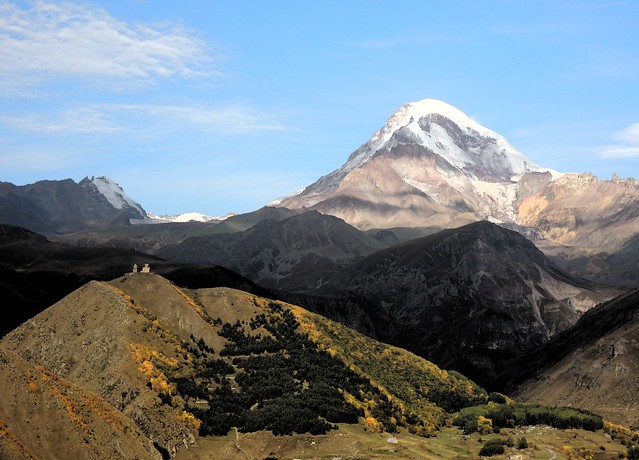 I left Antalya on Saturday morning and arrived in Tblisi the following afternoon (it’s a full 30-hour trip in spite of what the bus companies tell you) after the last marshrutka of the day had left for Steppantsminda.  I found a Russian heading to Russia (Steppantsminda isn’t far before the border) with extra room in his car.  Off we went in the pouring rain into the mountains.  When he wasn’t talking on the phone or chatting animatedly with the only other passenger, he was drinking water, smoking cigarettes, or messing around with the radio.  In the dark and the rain on the narrow, steep, curvy mountain road, he squeezed between the edge and big trucks with one hand on the wheel and I guess at least one eye on the road, once again confirming my thought that the most dangerous thing about mountaineering is getting to the trailhead.

I started walking about noon the following day from ~1700m.  Seven and a half hours later I made it to the Bethlemi Hut (former Met. Station; ~3600m), wet, cold, a bit tired.  It had rained off and on on the way up and then heavily once I got on the glacier.  Occasionally the clouds would lift enough to see where I was going.  After three days of bad weather, rumour had it that the following day would be nice.  Coming straight from sea level to 3600m I didn’t feel great, but I knew not to miss a good weather opportunity on Kazbegi.

I woke up at 2 the next morning to a heavy snowfall.  I checked again at 3:30 — still snowing, and the wind had picked up.  I decided to go back to bed, an excellent choice.  Once again, no one summitted that day.  I spent hours that day eating, reading, and sleeping.  As I improved, the weather did as well, and by 10pm it was the first cloudless sky I’d seen in Georgia.  I woke up at 2am, and not only were there still no clouds, but the wind had died as well!  A quick breakfast and I was on my way.

Just a couple minutes after I had passed all the groups that had started before me, two guys caught up with me.  It was Alex and Bardek, the Poles I had shared the room at the hut with.  We enjoyed the sunrise as we slowly curved our way around (illegally through Russia!) to the northern approach to the summit.  At about 4500m the tracks I’d been following ended.  The Poles again caught me at about 4600m and took over the trail-breaking for a bit.  Joined by a strong Russian guy a bit later, it was the four of us who broke the trail the rest of the way to the summit.

A bit before the final slightly steeper section those guys, ahead of me, chose a poor route.  I protested, but the decision had already been made when I caught them.  Straight up they were concerned of crevasses.  On their route I was concerned of avalanche danger.  I left them, went straight up, and was smiling on the summit about five minutes before they showed up.  The other groups that day followed my route up, and we all used it on the way down as well.  What they thought were crevasses were just some wind-blown snow formations.

I walked from 5000m all the way down to the village that same day with Alex and Bartek.  By noon the summit was socked in again, and it was probably snowing up there.  Just like on the way up we had rain off and on on the descent.  That 3300m descent was the longest one-day descent I’ve done, and I had the unfortunate opportunity to experience first-hand what shin-bite (or shin-bang?) is.  A month later I have pink scars on my shins, but they feel fine, ready for the next adventure.

Two days later (after a fun half-day in Tblisi) I was back at the border with Turkey.  Not only did I have no trouble with the visa, but no one questioned my four litres of chacha, Georgia’s high octane distilled spirit.  At one-sixth the cost of Turkey’s cheapest rakı, it’s, well, you get what you pay for. 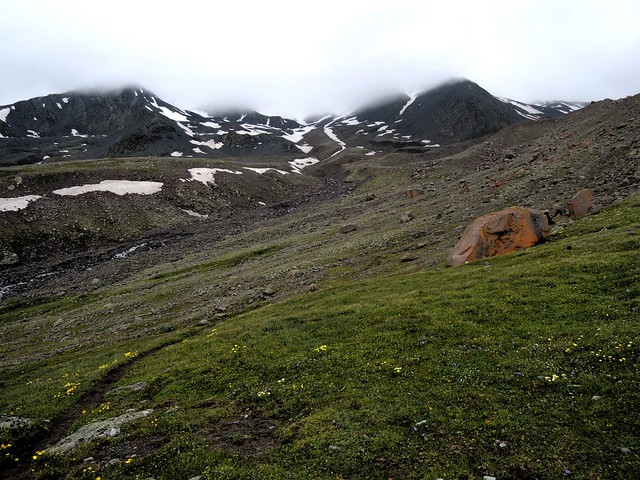 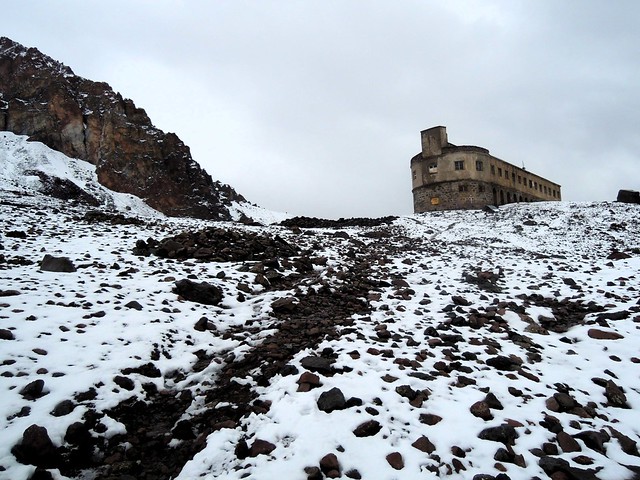 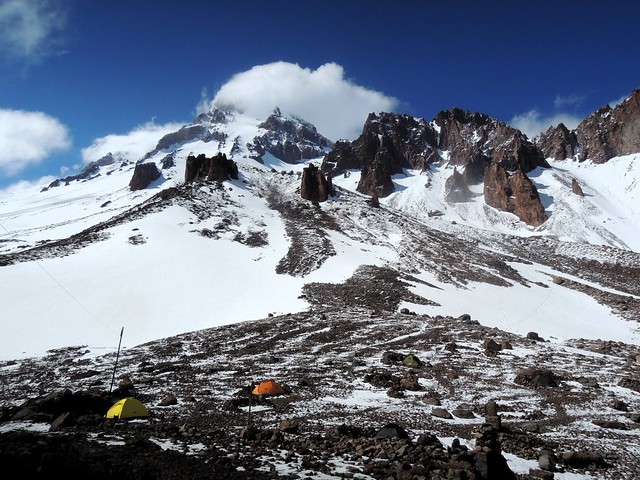 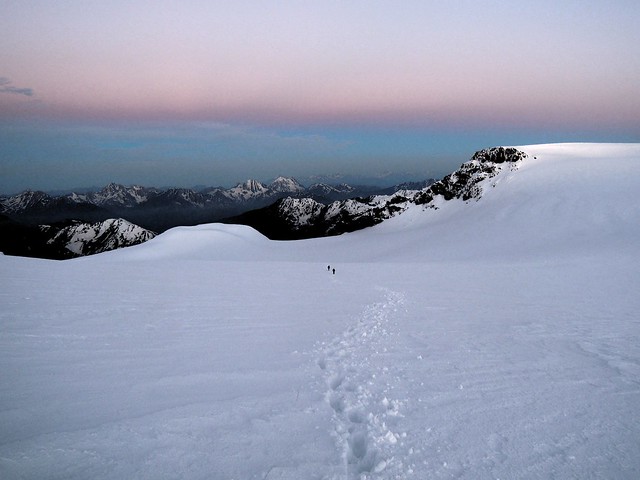 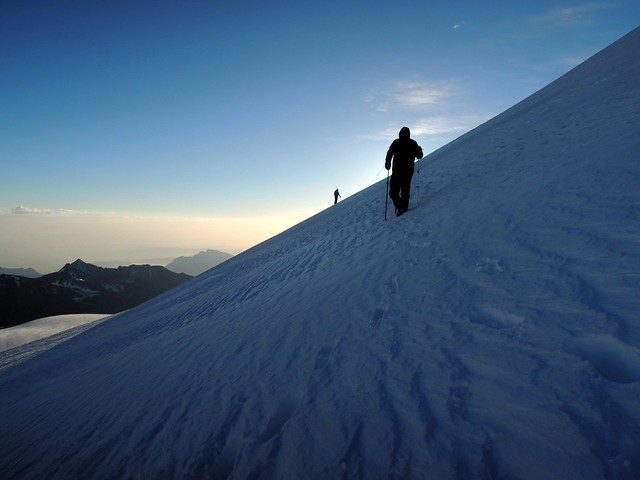 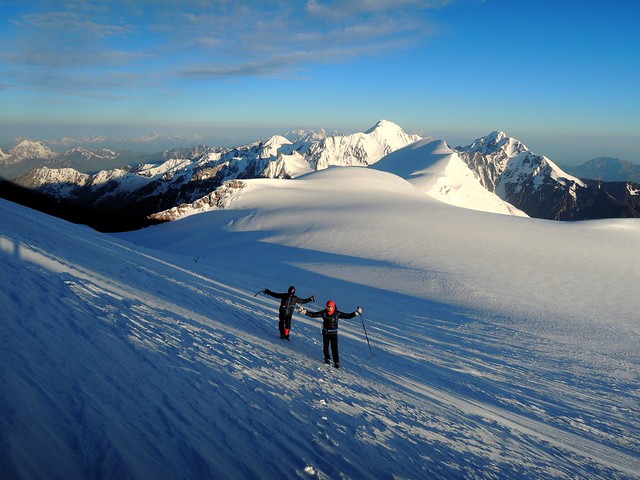 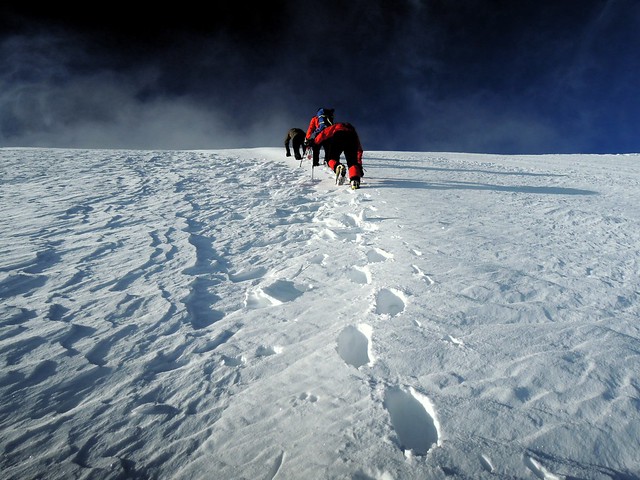 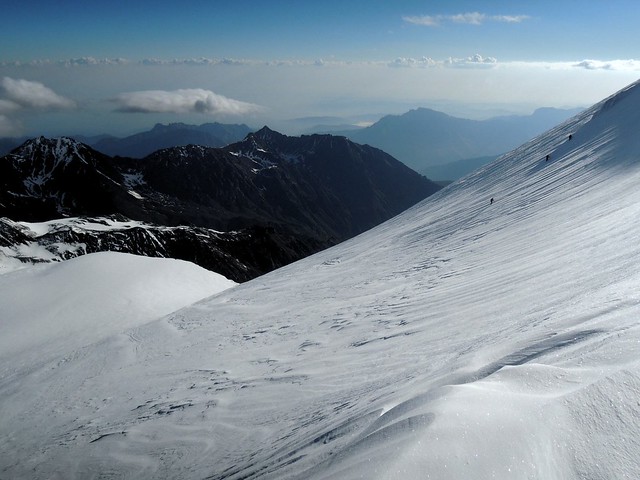 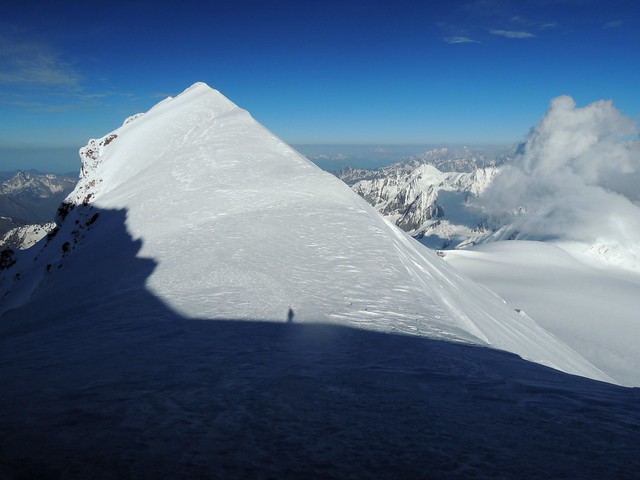 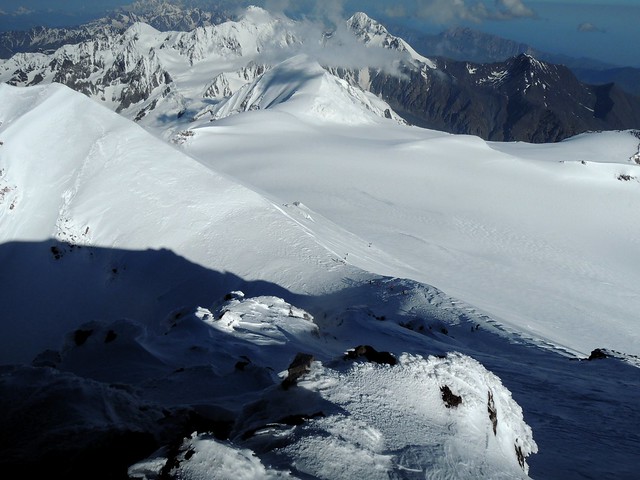 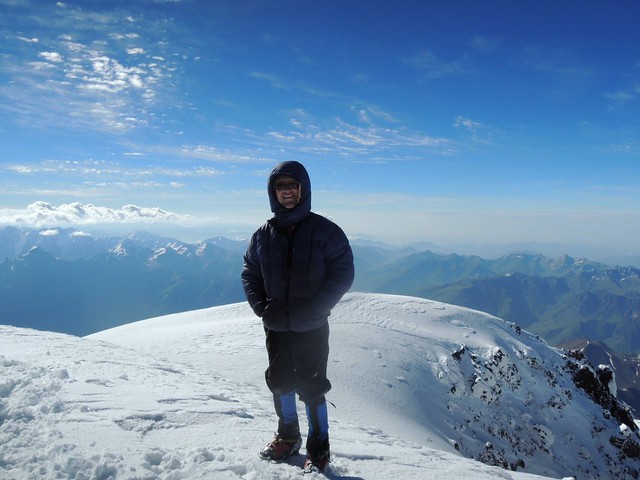 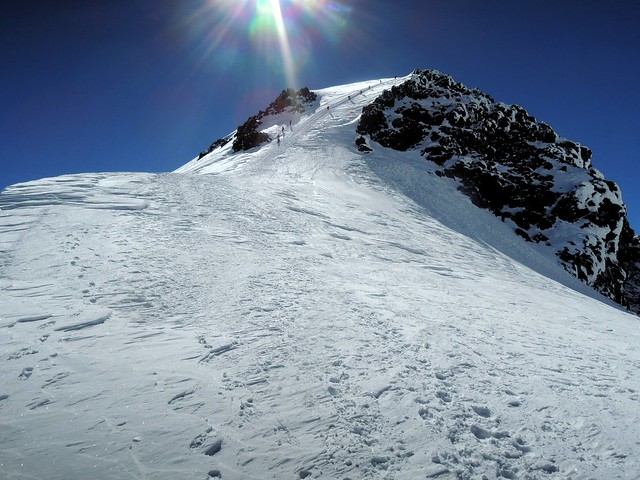 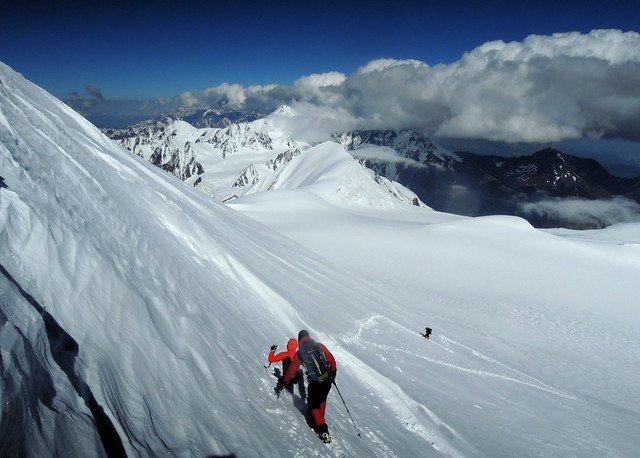 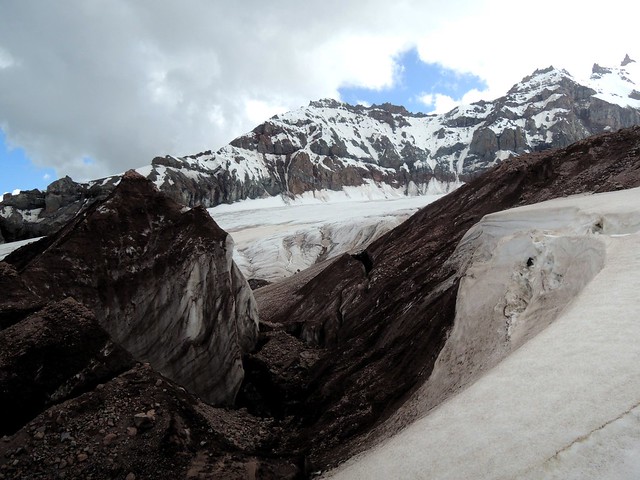 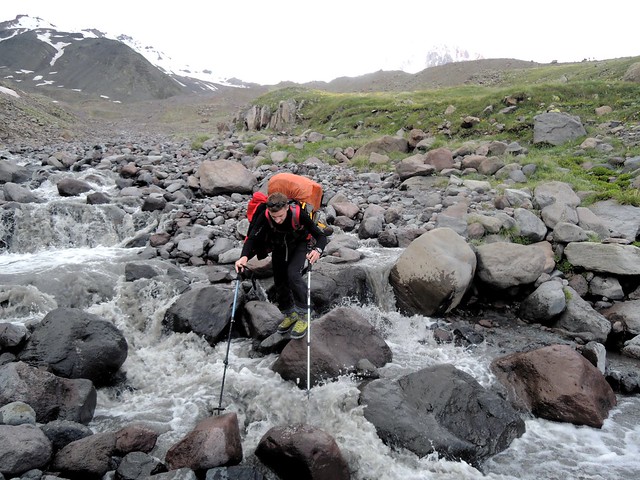 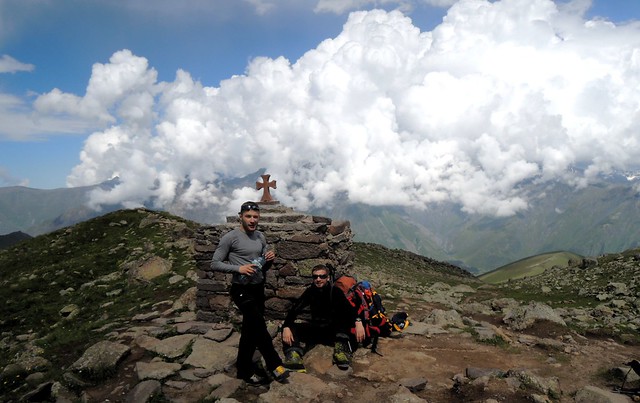 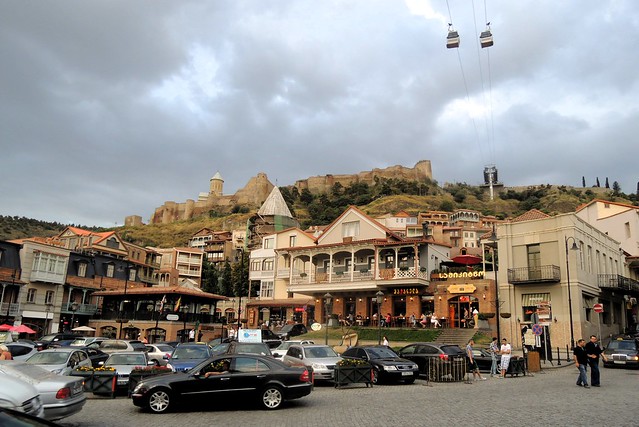 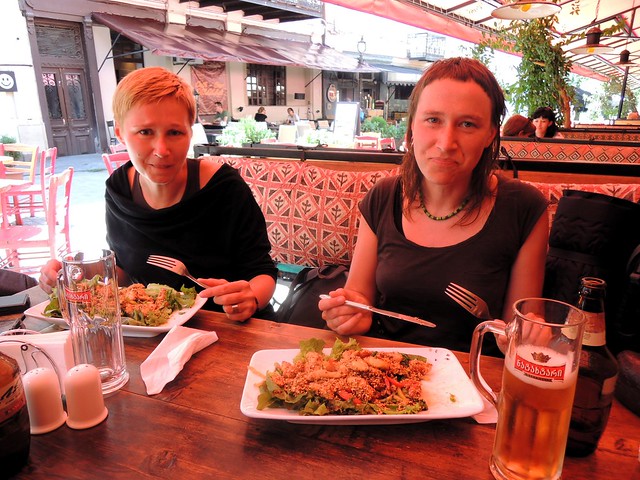 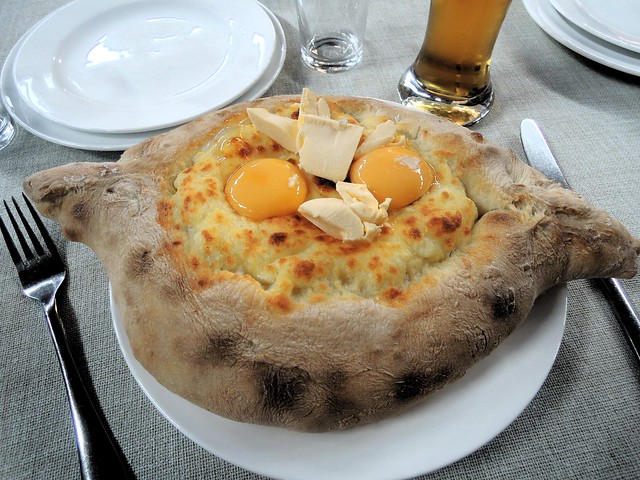 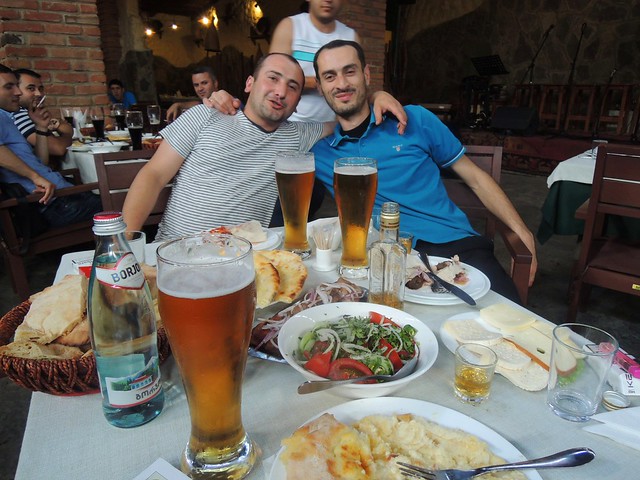 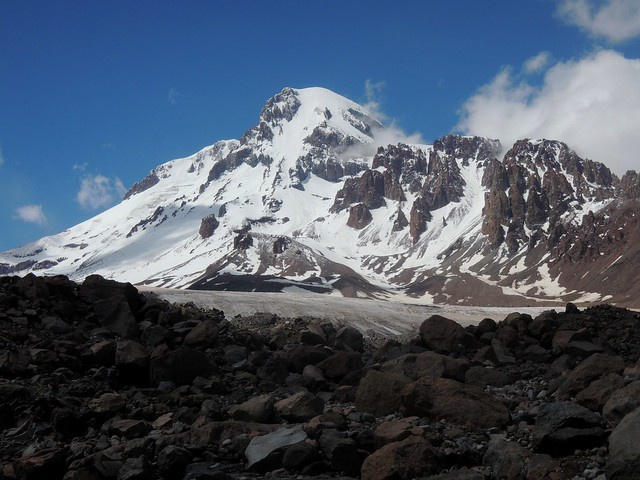 2 Responses to Visa run to Kazbegi