Nowruz with thousands of Iranian tourists

For our Iran tour my parents chose to go with Stanford Travel who they had traveled with before.  Stanford leads heaps of tours, usually accompanied by a Stanford professor, who gives lectures during the tour.  In our case Ed taught us a bit about Persian history and about how Persian culture has influenced European culture.  During one lecture Ed argued that the European courtly love tradition came from Persia via Muslim Andalucia.  He cited an 11th century Sufi poet, one Ibn al-Arabi, who was born in Sevilla.  Influenced by the Persian mystic Al-Hallaj, Al-Arabi wrote erotic love poems under the guise of an intense yearning for god.  Troubadours, in turn, took these poems to Provence, and so it goes.

Stanford scheduled this year’s Iran tour during the Iranian New Year, Nowruz, Iran’s biggest holiday.  As is obvious every year in Turkey, Iranians love to travel during that time.  There are more Iranians in Antalya during Nowruz, and the hotels in Erzurum were full of Iranians when I was there during Nowruz last year.  I was curious what special events Stanford had scheduled for us during Nowruz.  Oddly, nothing.  It even seemed as if they didn’t realize that we were coming to Iran during the country’s most crowded time for traveling.  Certain sites on our itinerary were closed because of the holiday and others, especially Shiraz and the nearby ancient sites of Persepolis, Pasargad, and Naqsh-e Rustam, were absurdly crowded.

We made the best of the crowds and enjoyed the interactions with curious and knowledgeable Iranians who were generally excited to hear that we were from the US.  I met Iranians from all corners of the country — Tehran, Tabriz, Bandar Abbas, the Caspian Sea, west near the border with Iraq, north near the border with Turkmenistan, and other places that I had never heard of.  One young man gushed to me about the nature around Kermanshah, making me want to go there during my next visit.  I’d also love to visit NW Iran where you can see Armenian relics in the mountains and Azeri is widely spoken.  It is, of course, a large country, but like in Turkey, by picking a small area, it seems there could be good opportunities for bicycle touring. 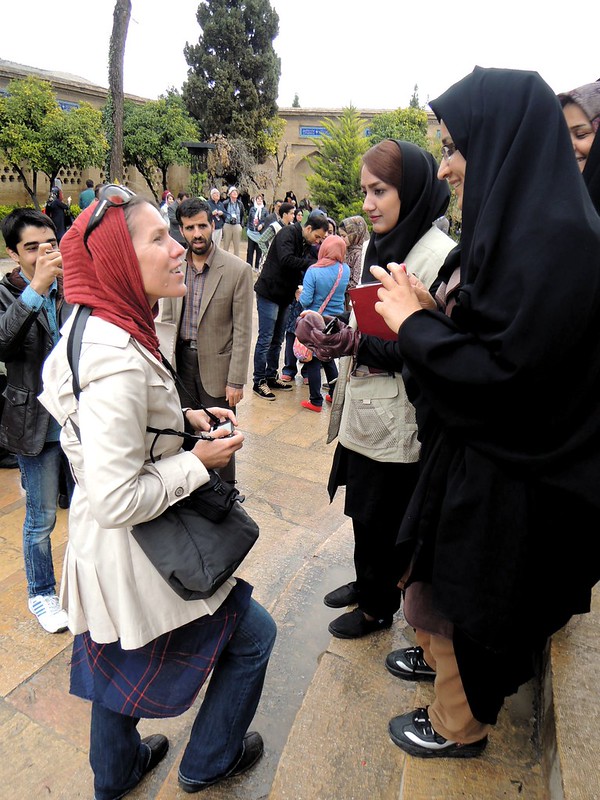 Nowruz is a secular holiday, pagan we might even say.  It’s the spring equinox that marks the beginning of the year in the Islamic Republic.  After the crowds, the most noticeable tradition is the Nowruz Haft Sin tables, which at a minimum are supposed to offer seven things that start with the letter s (in Persian/Farsi).  Some of these may be garlic, apples, coins, grass, fish, a mirror, dates, flowers.  In 11 days I took photos of 24 different Haft Sin tables. 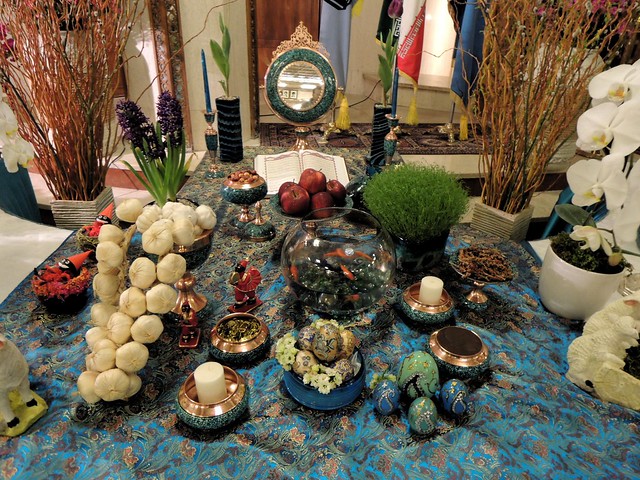 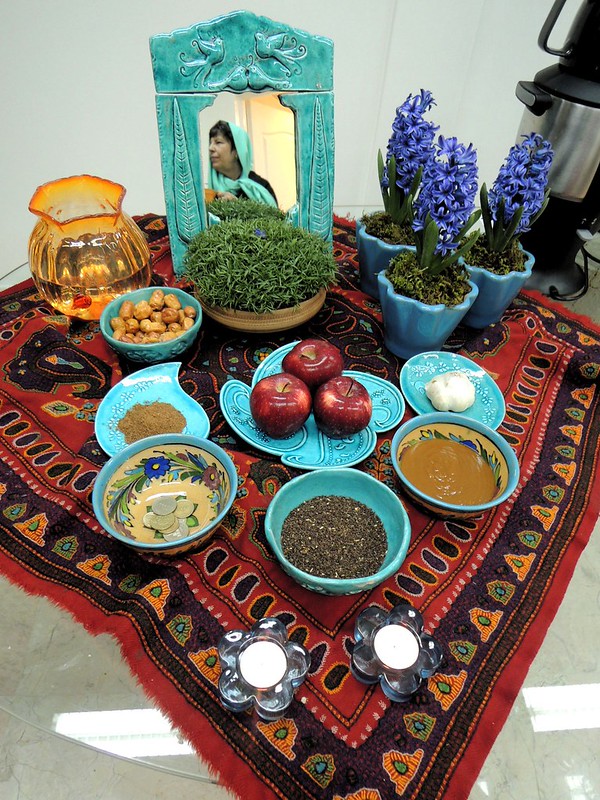 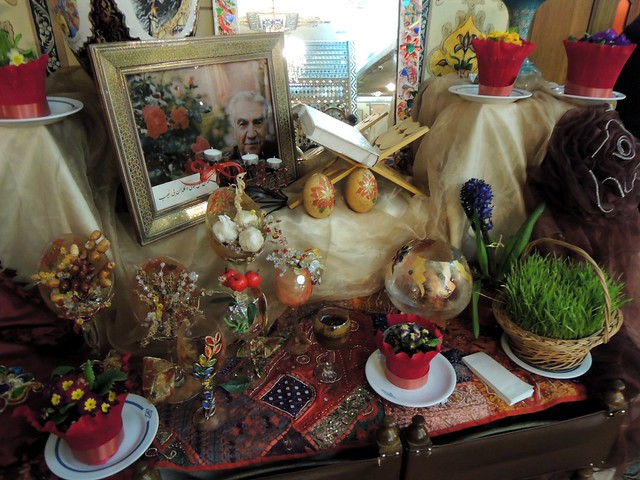 I also found it interesting that Stanford warned us about the heat in Iran.  Luckily no one on our trip took that too seriously.  Everyone had many layers for the cool, windy, often wet March weather.  Driving through the desert from Kerman to Yazd, the road usually followed gently sloping wide alluvial valleys, and we were treated to views of snow-covered mountains rising abruptly out of the valleys like in the Mojave Desert.  The snowy peaks in Tehran were even closer, sometimes visible through the pollution and clouds, and we walked by snow still melting in the streets of North Tehran in March.

Yazd, more known for its heat than it cold, was still pleasantly cool in March.  One can’t go to Yazd without being curious about the badgirs, or wind catchers, that make this small city’s skyline unusual.  The idea is that the badgirs catch the cool breeze and direct it into the house keeping it cool during the hot summer.  How effective they are I can’t say.  The world’s tallest badgir, 33m high at Bagh-e Dolat Abad, made its connecting room downright cold when we visited. 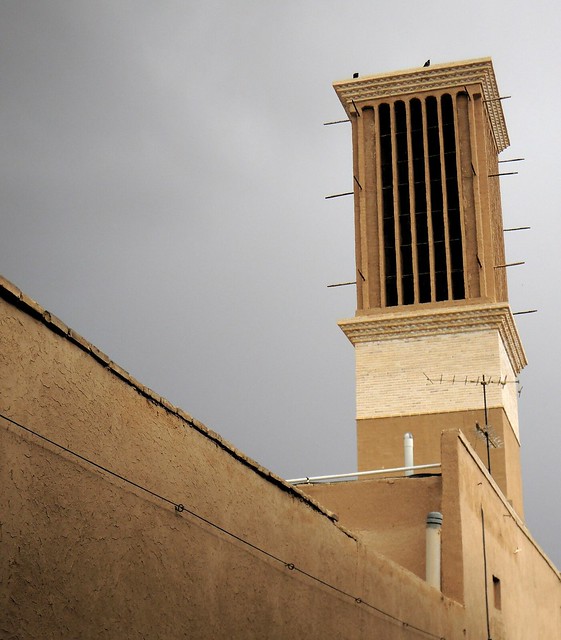 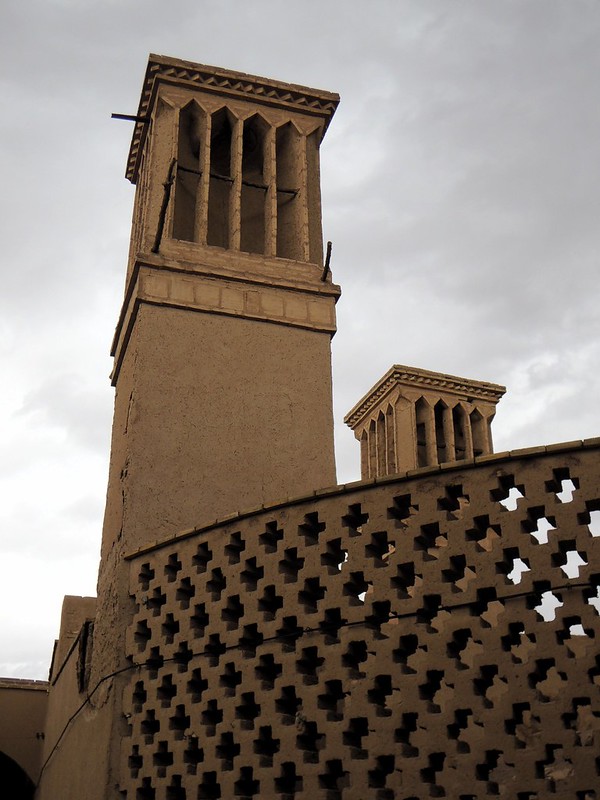 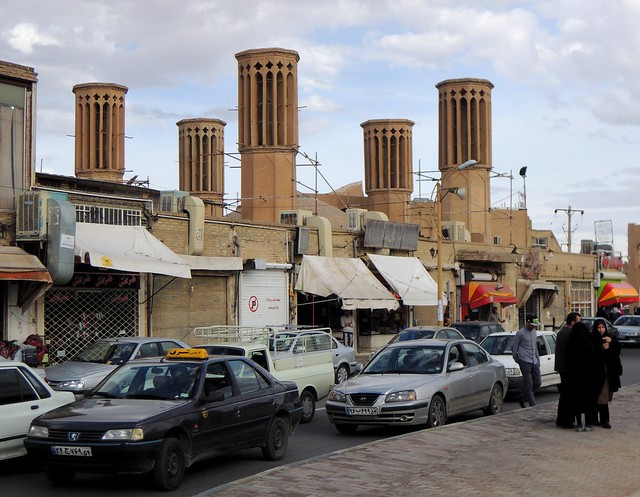 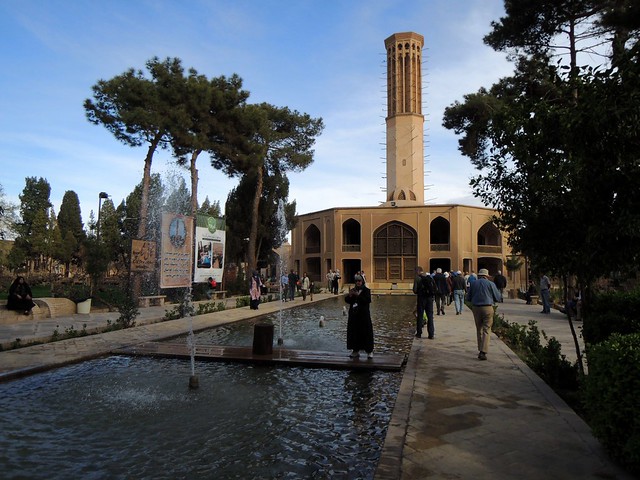 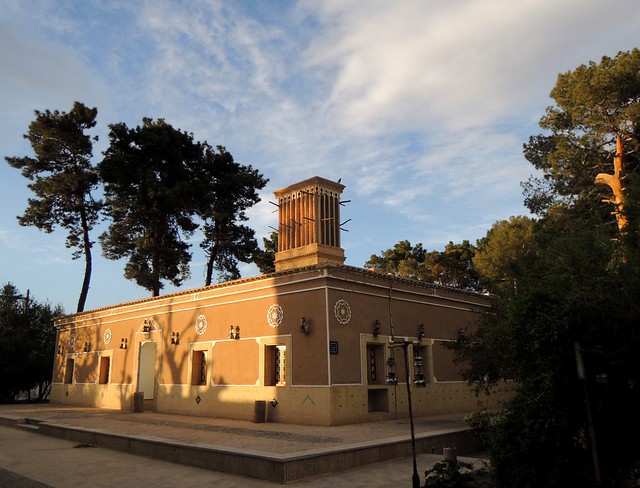 In Yazd I loved the Friday Mosque. 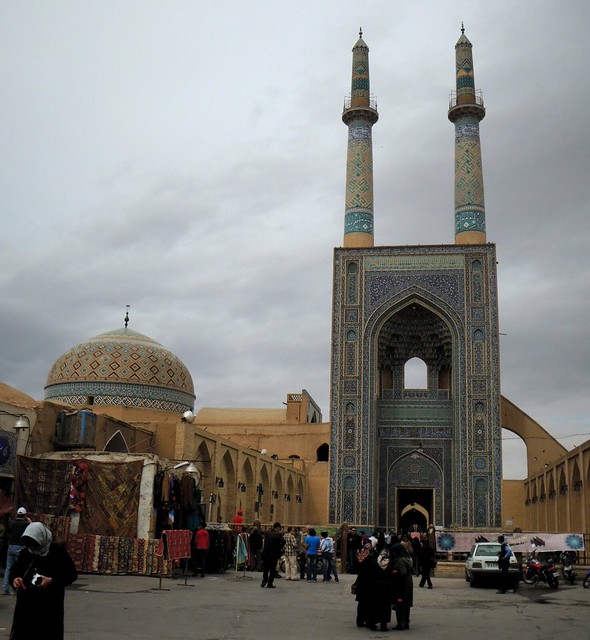 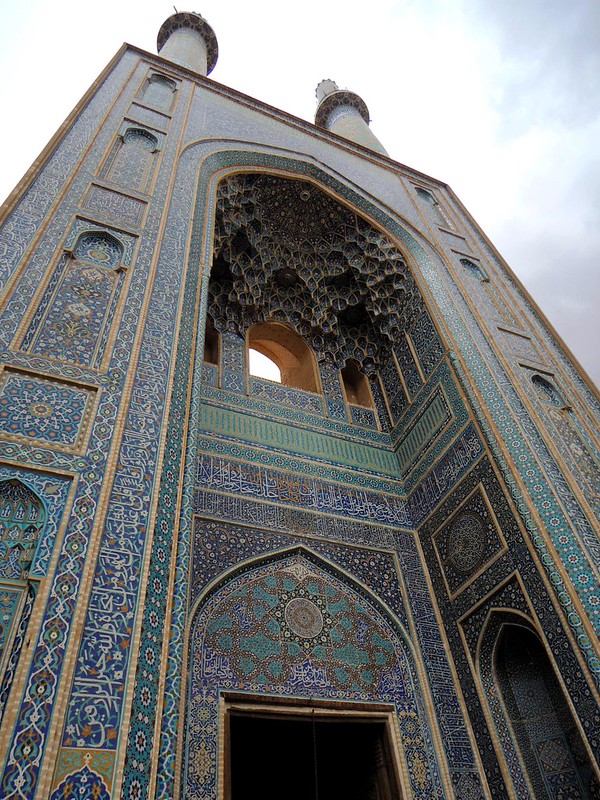 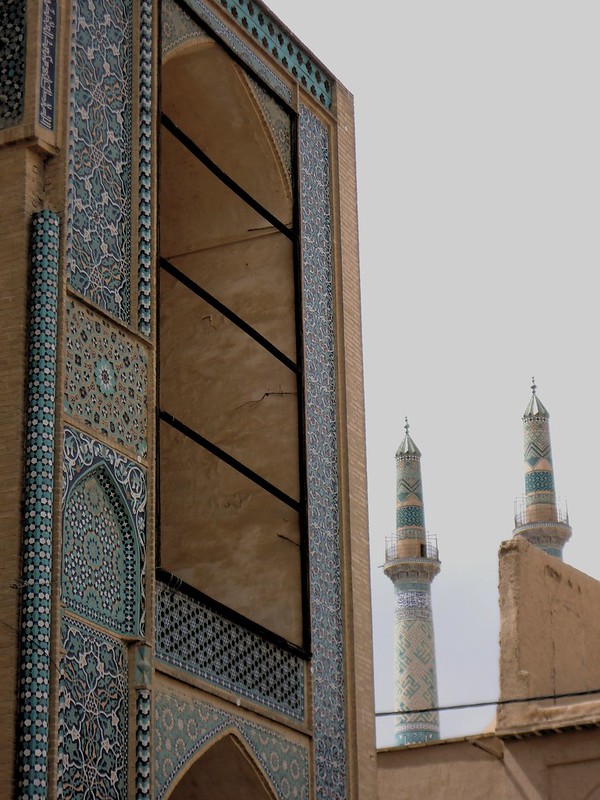 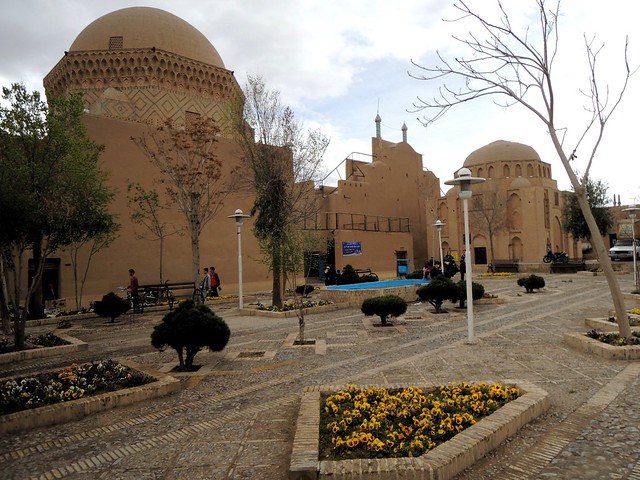 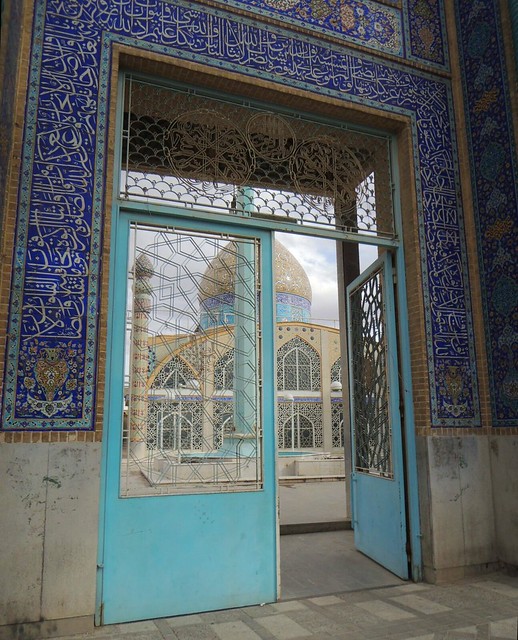 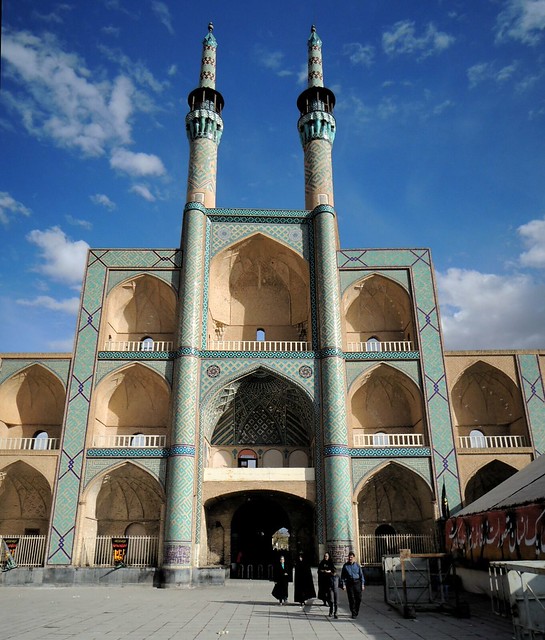 From Yazd we went by bus to Shiraz where we visited gardens, palaces, and perhaps Iran’s most famous site, the Persian capital 2500 years ago, Persepolis.  Of particular note are the carvings showing ambassadors (slaves?) from 23 nations bringing gifts to the Persian Emperor.  Persepolis isn’t jaw-dropping, but it’s extensive and had the largest palace in the world at the time.  The carvings are interesting and in very good shape. 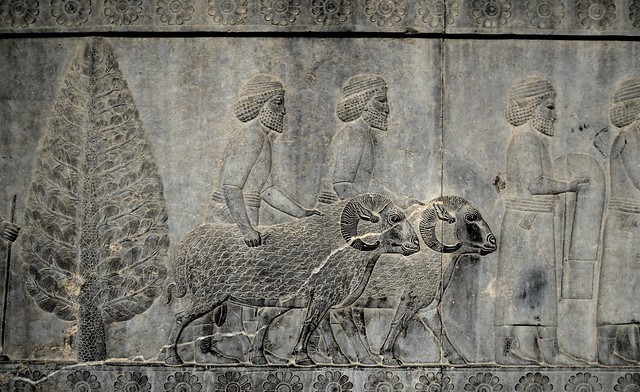 The first Persian emperor, Cyrus the Great, is buried nearby at Pasargad.  The tomb is Persian-style with the exception of the gabled roof, an influence from Anatolia. 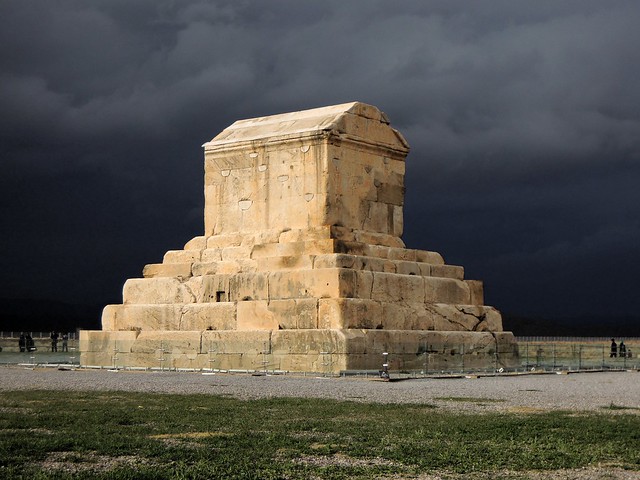 Notice the similarity to this Likian Tomb at Termessos: 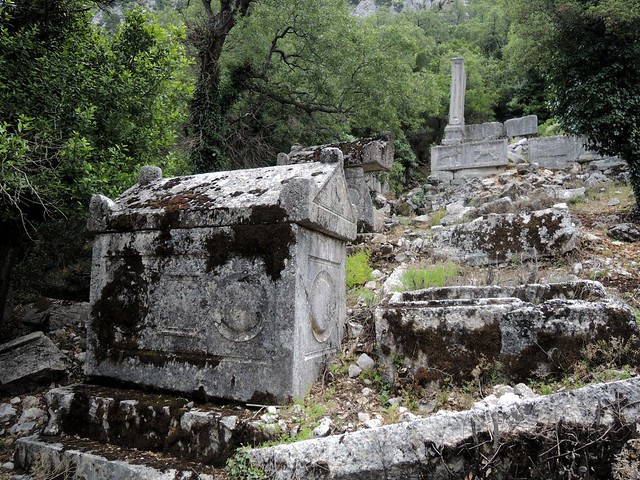 Other important folks are buried at another nearby site, Naqsh-e Rostam, where we saw yet more amazing carvings.  Historians and archaeologists learn lots from all this stuff, but I was starting to get overwhelmed with all the information that we were trying to digest in such a short time. 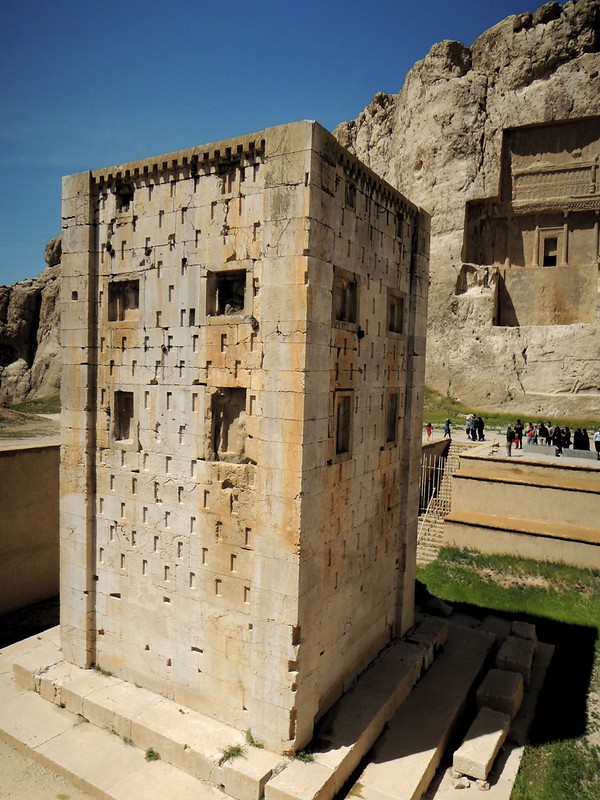 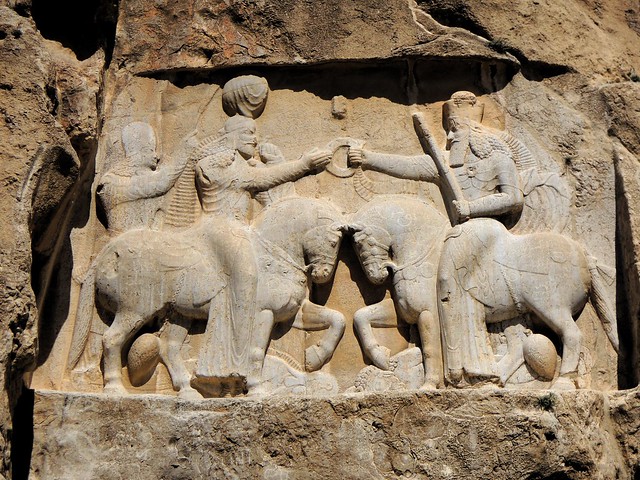 Nearby Shiraz is noted for its gardens and palaces.  I liked the Pink Mosque (Nasir al-Mulk Mosque) with its tile work showing Christian cathedrals.  Arriving early in the pouring rain kept the crowds at bay there.  Other sites were rightfully busy.  The most pleasant city we visited in Iran, Shiraz has a lot to offer tourists. 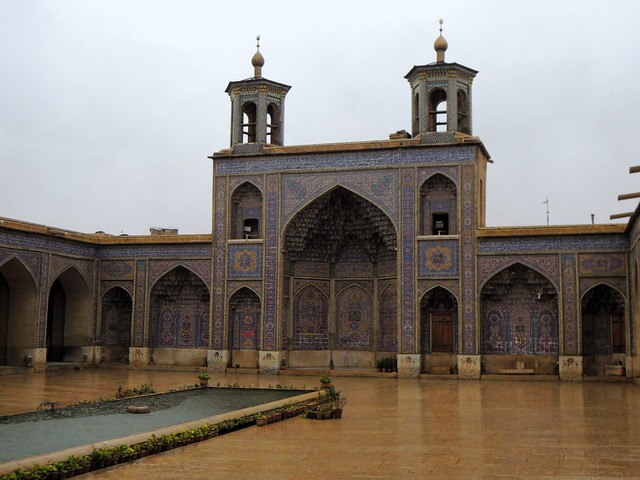 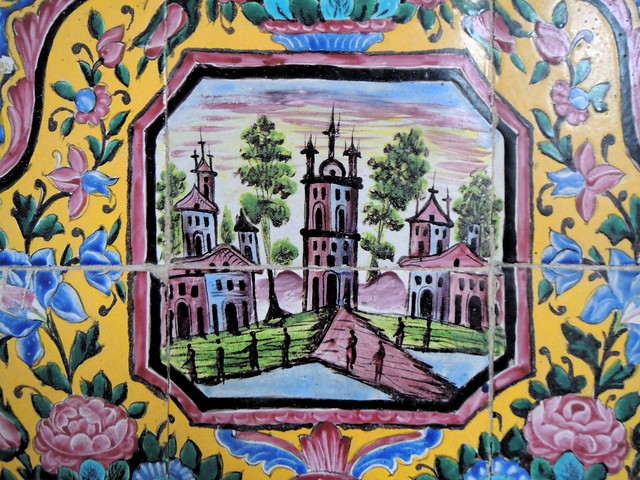 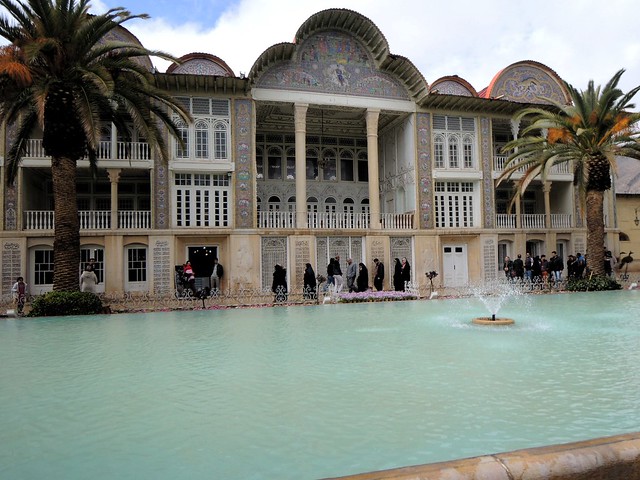 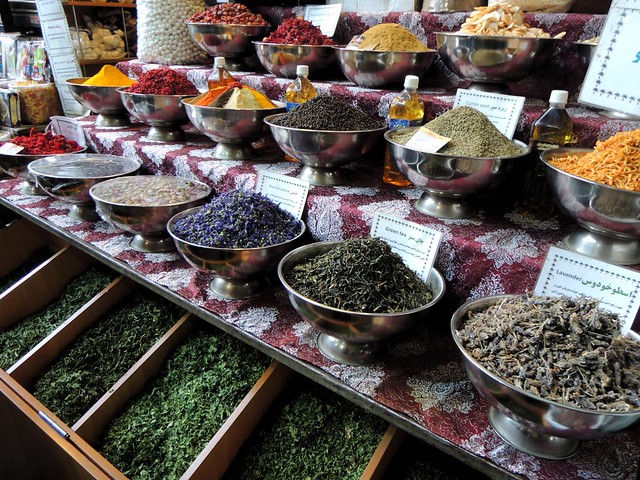 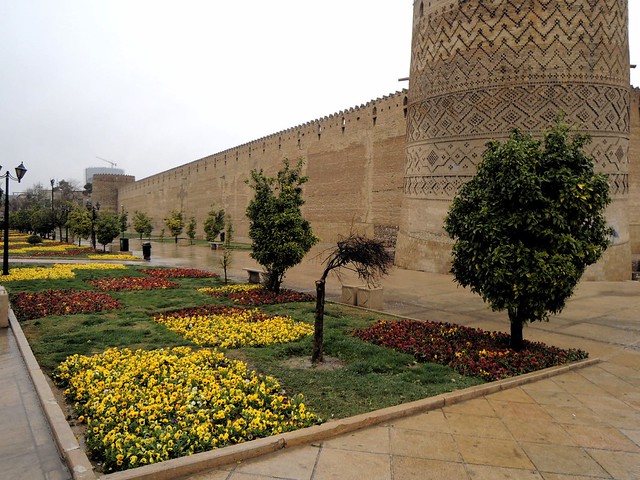 Perhaps the biggest surprise in Shiraz was the Tomb of Hafez, full of Iranians paying homage to Shiraz’s beloved poet, an advocate of good sex and good wine 600 years ago.  I think my brother’s six-year-old is also a fan, after completing the Tomb of Hafez 3D puzzle. 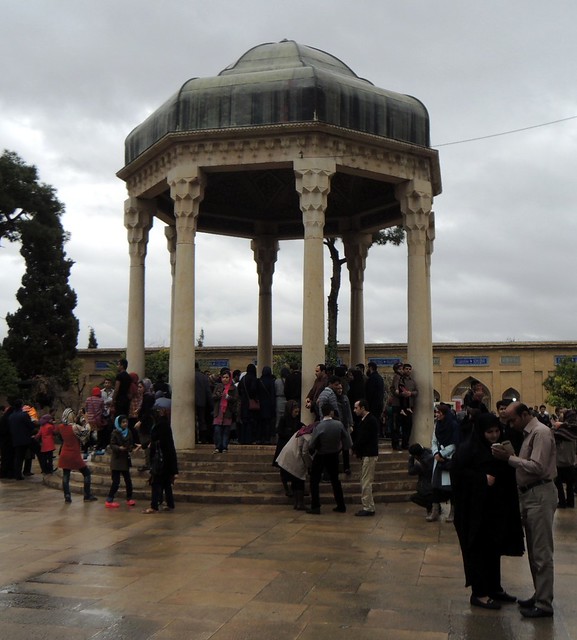 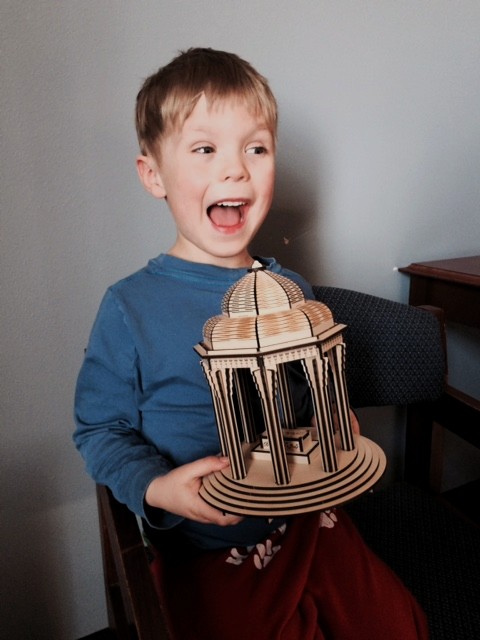 2 Responses to Nowruz with thousands of Iranian tourists