Two years ago I went with a Turkish AKUT group from Antalya on a descent of Ahmetler Canyon in Akseki, Antalya.  A couple weeks ago I joined a mountaineering group from Bursa on a descent of Harmankaya Canyon in Bilecik.  Our two guides were AKUT members from Bozüyük.  I guess it should be noted that AKUT (Arama Kurtarma Derneği) is really a search and rescue group, not a climbing or mountaineering group.  One thing notable about both these canyon descents with AKUT leaders was how slow we went.  In Colorado we talk about “speed is safety”.  I wonder if that’s something that ever comes across in all the mountain training that the Turks are so keen about.  It seems like more Turks take mountaineering courses than actually do any mountaineering.

I first saw Harmankaya Kanyonu from way across the valley when I was bicycling through Bilecik two years ago.  There was nothing on my map to indicate a huge canyon was nearby.  Seeing it from across the valley, I changed my route to go through Harmanköy and took a full day of riding to cross that valley to get to the bottom of the canyon.  There I parked my bike, prepared for a hike in the water of the canyon, found a walking stick to test the water depth, and was able to walk in about two meters before the water was above my head.  I wasn’t ready for that, but ever since I’ve been wanting to return and do the Harmankaya Kanyonu descent. 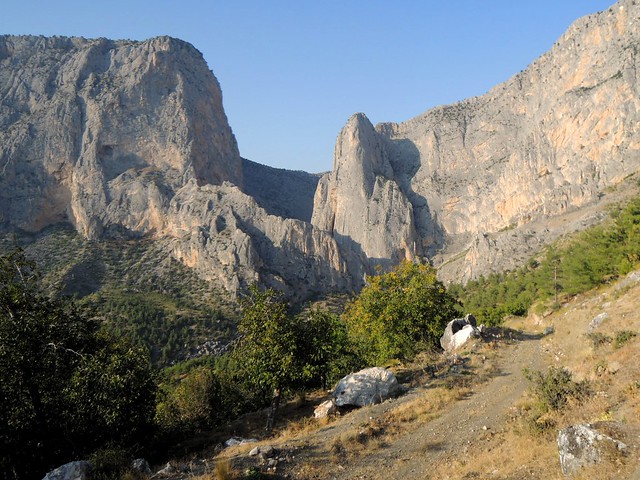 The group we joined came from Bursa.  Ferda had been visiting her family in İzmir, and I was in Antalya so we met in Bozüyük and waited for the group from Bursa there.  We camped near Harmanköy which really is a great village.  The views are incredible, and the locals are very friendly.  I felt that my first time in the village, and it’s certainly true.  Ferda befriended some of the old women at the fountain, and one of the them ended up inviting Ferda to her house and giving us some fresh cheese.  Even with groups coming almost every weekend in the summer to descend the canyon, the villagers still seem genuinely happy and excited that people come to visit.  There’s nice camping with fresh water and views of the canyon.  Apparently there’s some climbing on the walls at the bottom entrance (exit?) of the canyon. 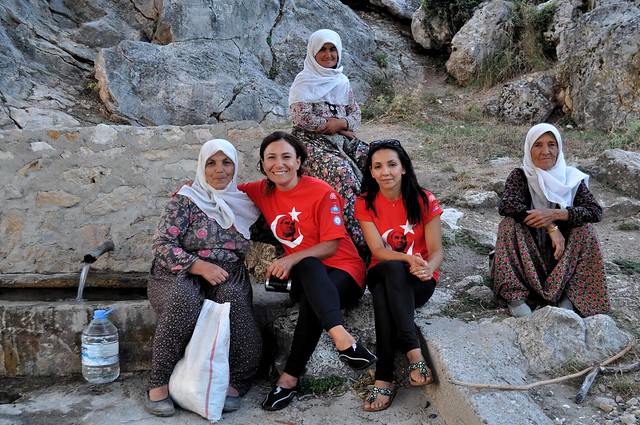 We had a campfire in the evening, but I didn’t stay up late as I was beat from the overnight bus from Antalya to Bozüyük.  In the morning a bunch of time was wasted making gözleme.  Sure, it was good, but we had a long day ahead of us.  The drive around from where we camped near the bottom of the canyon to the entrance at the upper end took about two hours.  We went through Yenipazar, a village (İlçe actually) that I really liked when I biked through there.

It was 10am by the time we entered the canyon.  That was plenty early as even with moving slowly we were out by 5pm.  My biggest concern before coming was the cold.  Don’t I need a wetsuit?, I asked.  Mehmet assured me that he had done it the year before without a wetsuit.  Well, he was with us at camp, but why did he choose not to come down the canyon?  Because of the cold!  I wish I had known that earlier.  I wouldn’t go back without a wetsuit and would highly recommend a wetsuit to everyone even though only two people in our group of 10 or so had one.  For most of the seven hours I was shivering uncontrollably.  I had trouble taking photos because I couldn’t keep my hands still. 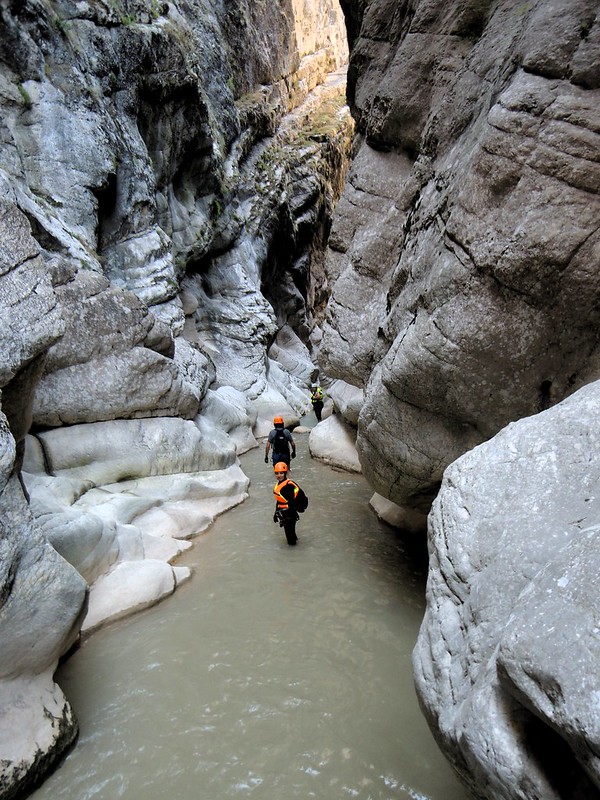 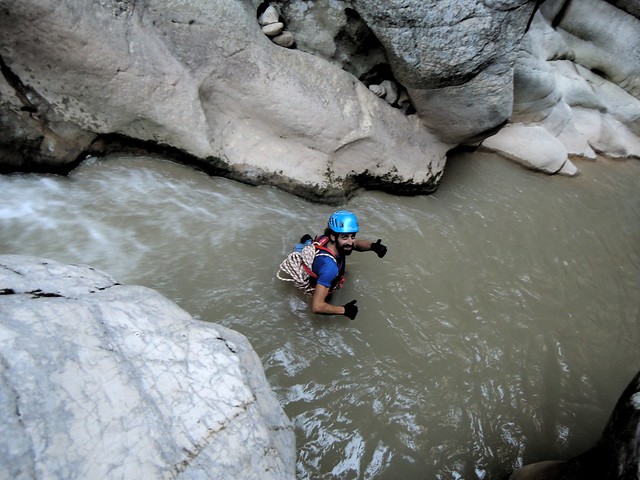 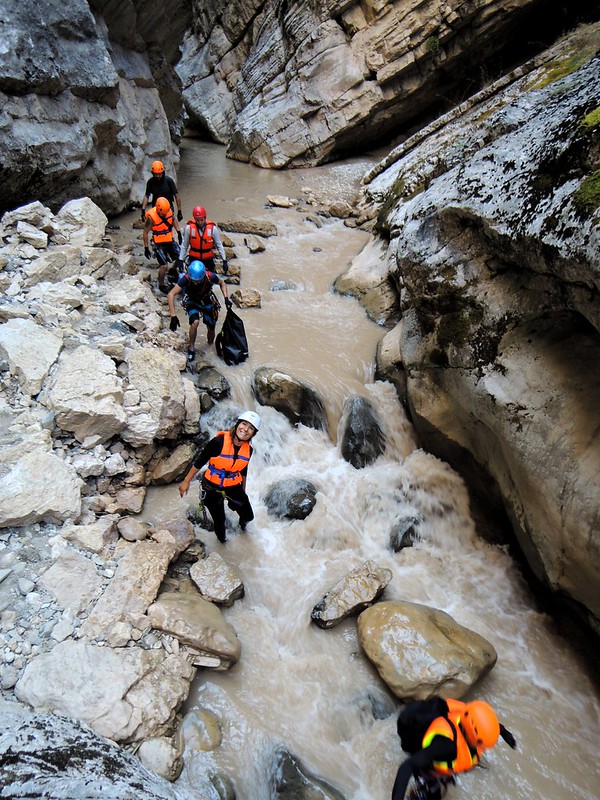 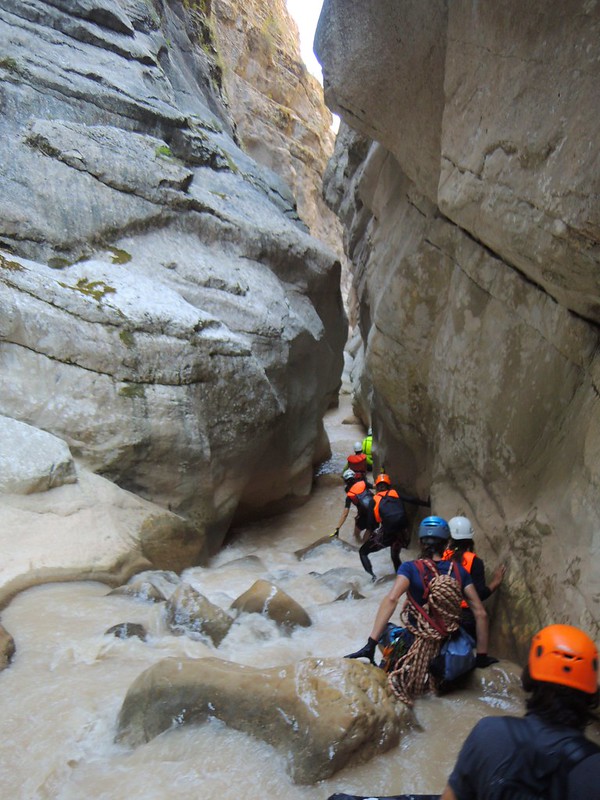 The canyon is beautiful, fun, not too difficult.  The water is brown so you can never see where you’re stepping.  Bambam, one of the guides, usually went first into the places where we had to jump down.  Then he’d indicate where we were to jump to avoid hitting rocks.  I’m not sure how he gets the confidence to do this since the canyon changes after every storm.  However, he did mess up his knee somewhere that day.  I have to wonder if it was on one of these jumps.  We had two rappels where we used our own rope, and two or three other places where fixed lines were in place.  That said, it’s an easy and short descent.  Gülşah took her eight-year-old (?) son, Alp, down the canyon last year. 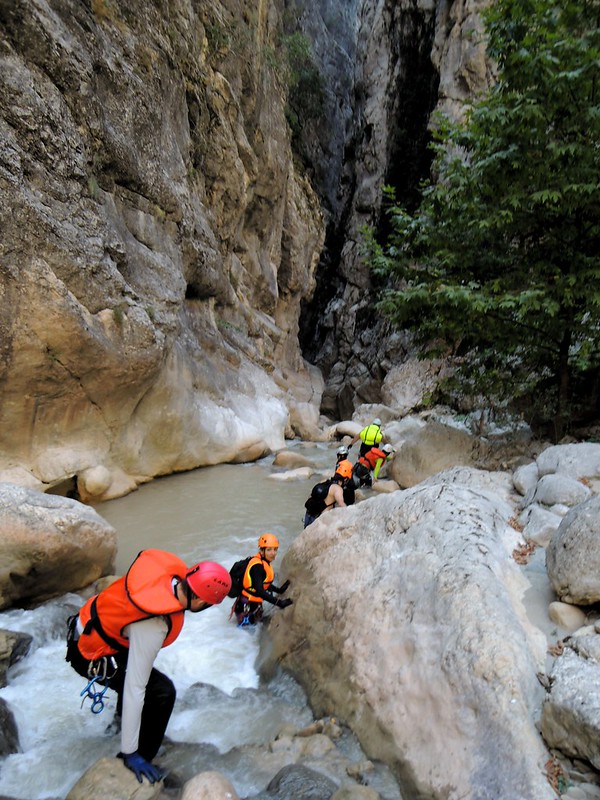 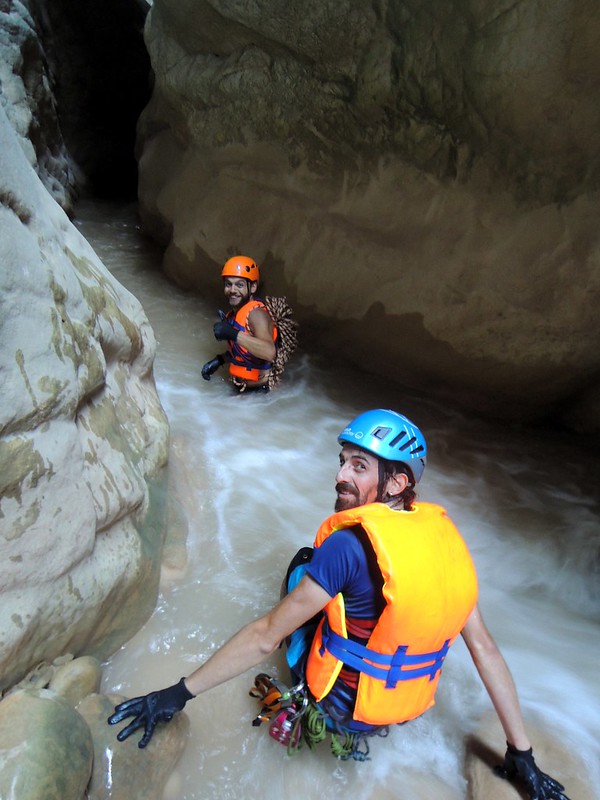 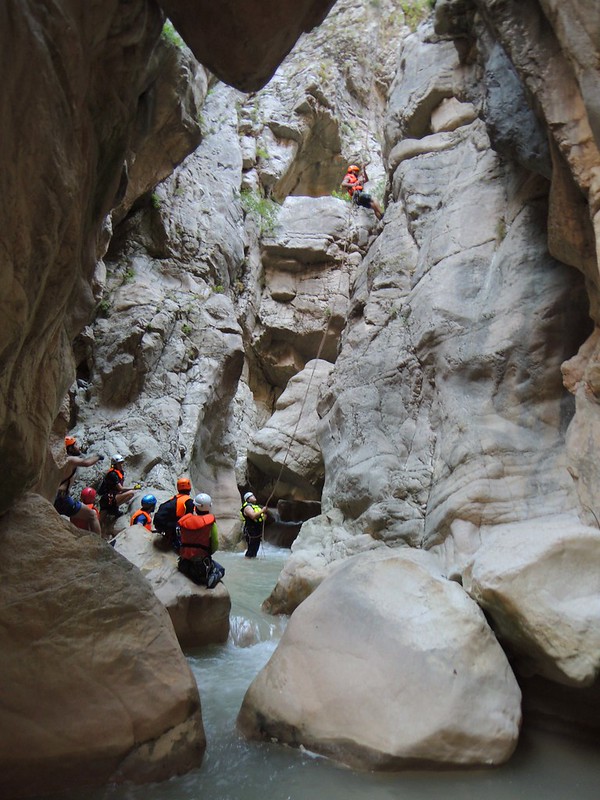 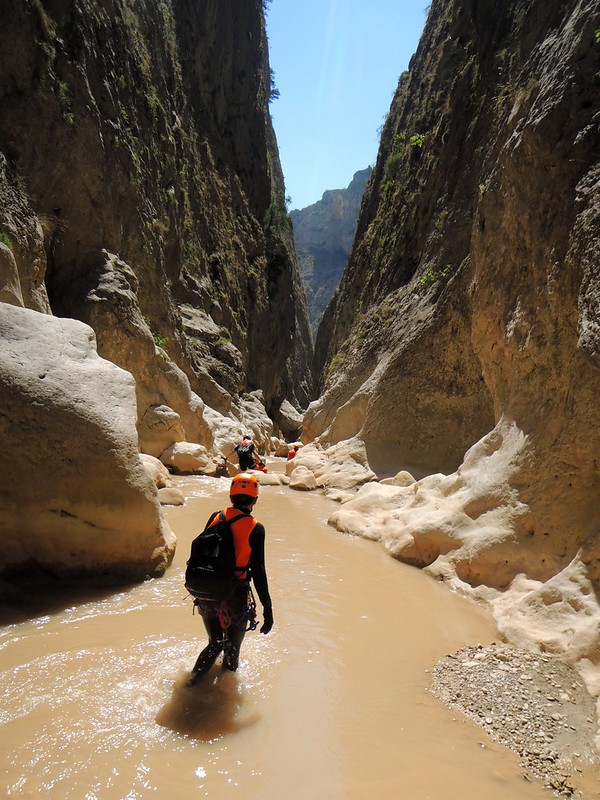 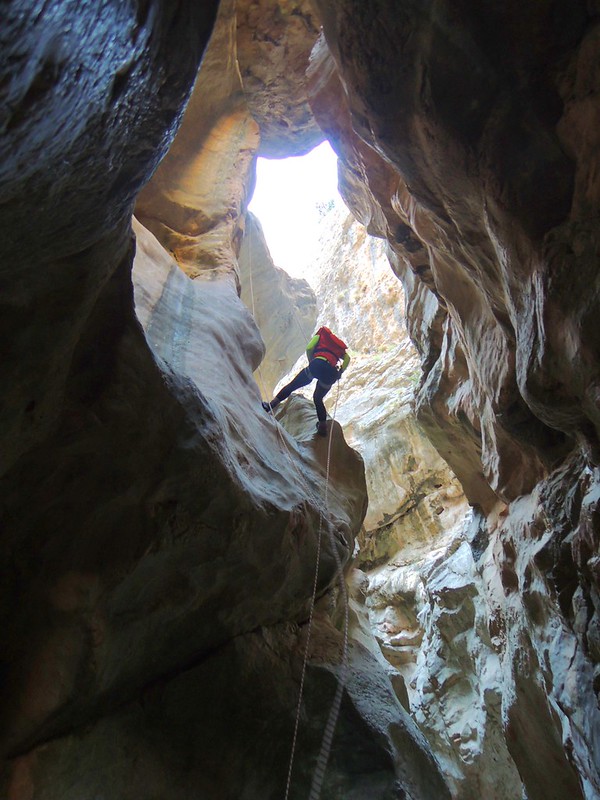 The group drove back to Bursa the same evening and dropped Ferda and me in Bozüyük for an overnight bus back to Antalya. 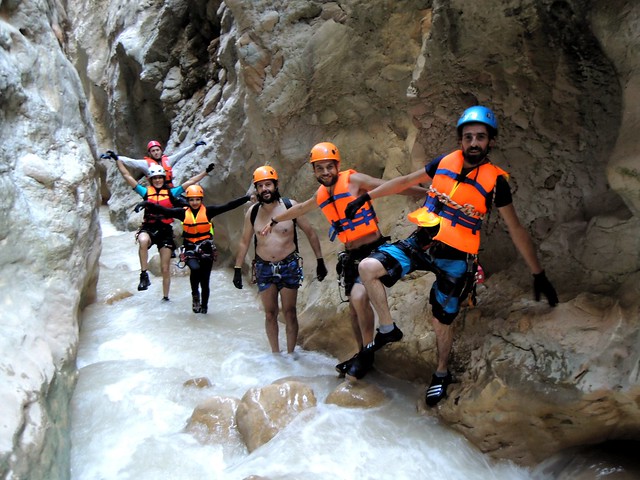 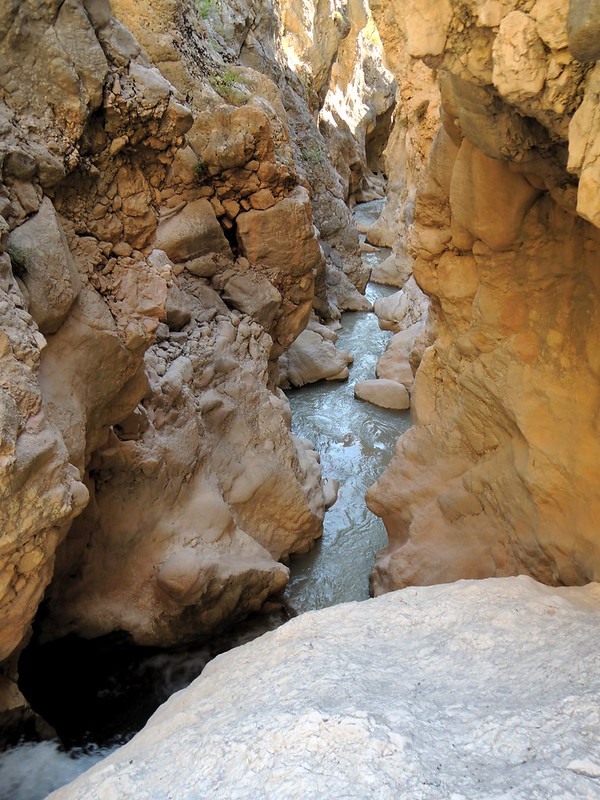 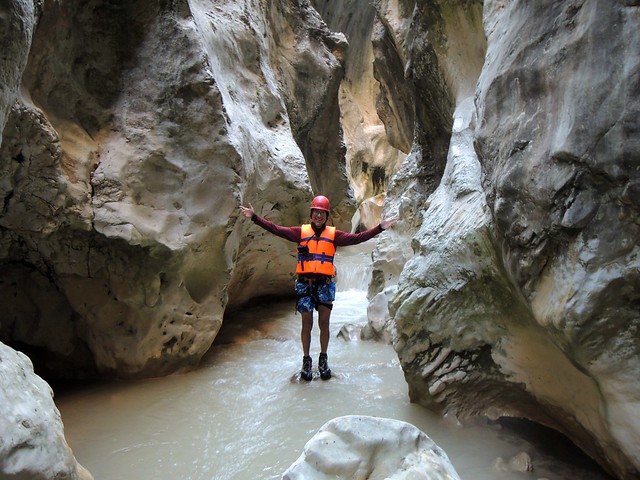 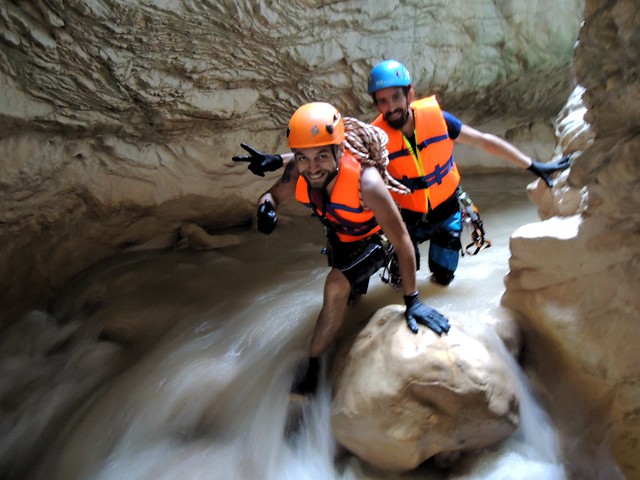 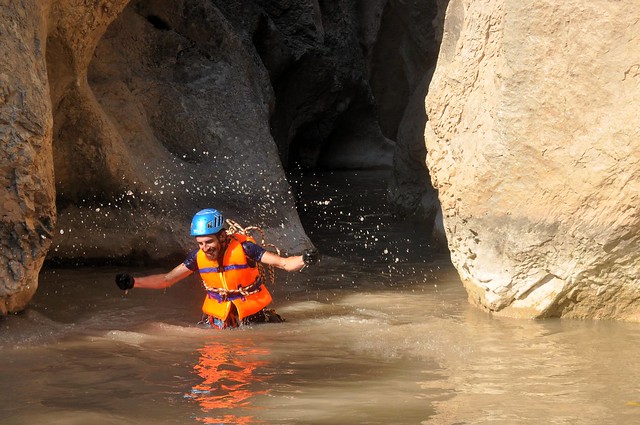