Oman: The Subcontinent in the desert?

In Oman the scenery didn’t look like anything I’ve seen in India, but culturally it felt like we were riding through the Indian Subcontinent, not the Arabian Peninsula.  It seems like foreigners do all the work in the country, and the majority come from India, Pakistan, and Bangladesh.  In Muscat we stayed with Stuart and Aslı, from England and Turkey, and their live-in housekeeper, Mary from Goa.

Our first tasks leaving Muscat at the start of our bicycle tour were to buy groceries, fuel for the stove, and a SIM card.  I didn’t see Omanis working at any of these places.  It was all Bangladeshis at the gas station, and Indians from Kerala got me set up with an Omani phone card.   In my notes from the first day biking in the country, I wrote, “Aren’t there any Omanis?” 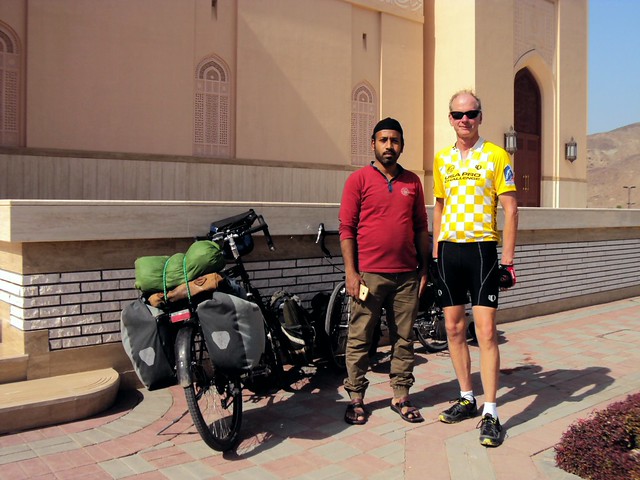 The Omanis we did see at shops were customers, not workers.  Omanis drive to the shops in their fancy cars (or Toyota Hilux pickups if the roads aren’t so good), honk the horn, and are served without ever leaving the car.  They sit in their air-conditioned bubbles while an Indian braves the heat to serve them tea, chips, and samosas.  Coming from the US, it seems incredibly rude.  Jack even saw this sort of drive-up service at a hardware store. 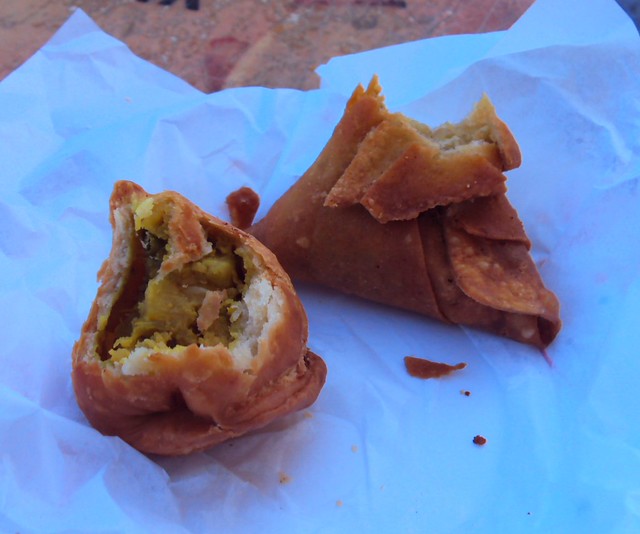 Almost all of the foreign workers are young, male, and married with kids, but come to Oman without their families.  They work in Oman and send money home to their wife and kids who they visit once a year.  It sounds horrible to me.

The issue of migrant worker exploitation is well-known.  We certainly talked to more foreigners than Omanis during our time in the country, and I asked quite a few people about their satisfaction being there.  Few migrant workers love Oman.  Indeed even as a tourist with money it’s a hard place to love.  Two groups of Bangladeshis were particularly vocal with their complaints.

On the road to Wadi al Arabiyin, we spoke with some Bangladeshi agricultural workers.  One man explained, after living expenses he ended up with 50-70 OMR/month to send back to Bangladesh.  It’s too little, he said.  I heard the same story with slightly more detail from one of the Bangladeshis we met collecting trash on the beach.  He made 100 OMR/month and has monthly expenses 10 OMR to his Omani boss (for sponsorship), 10 OMR for a place to live, and 20 OMR for food.  It leaves 11,000-12,000 Taka to send home, not enough, he said.

Pakistan workers outside a shop in Luzugh: 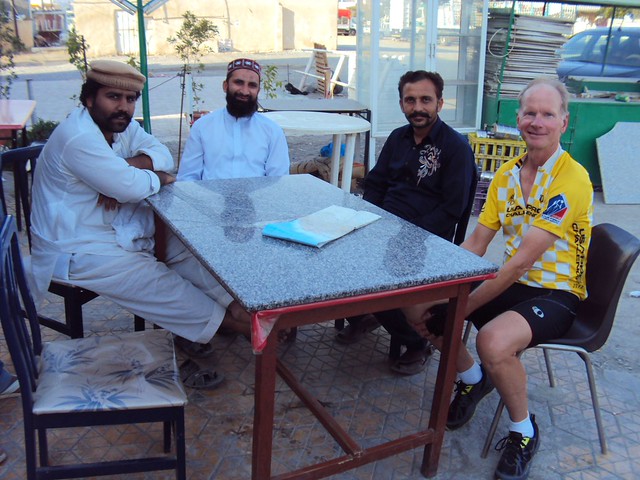 A high-school-age Pakistani woman who I met at the hot springs in Nakhl spoke excellent English. She was born in Oman, doesn’t have citizenship, and can’t get it.  She said there’s lot of discrimination in Oman (she didn’t elaborate) and the laborers (like the Bangladeshis mentioned above) have it particularly hard.

I did get some Omanis take on all this.  A group of young Omanis invited me for coffee and dates in the village of Hawmaniyah.  Mahoon finished university four years ago but hasn’t had a job because there are no jobs in Oman, he said.  “But there must be jobs,” I said, “there are so many foreign workers.”

“Oh, they work for 120 OMR/month.  If an Omani were to do that same job, he’d need 600 OMR/month.  So the companies choose to hire five workers from the subcontinent rather than one Omani.”  And then he laughed.  Sounds pretty screwed up to me.

As Jack and I learned more about migrant worker exploitation in Oman (and the GCC countries in general; UAE is worse, I believe), we were also learning how to find good places to ride in Oman.  We enjoyed traveling and bicycling in the country more and more each day so that by our last week together I really could begin to understand why bicyclists like the place so much. 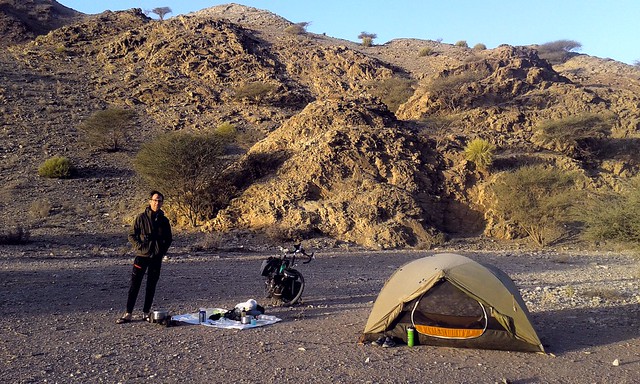 We continued to take advantage of dirt road opportunities off the main highway as we made our way north back to Muscat.  The road west of Dibab to Wadi al Arabiyin twisted through a stunning canyon and took us to a fantastic swimming hole. 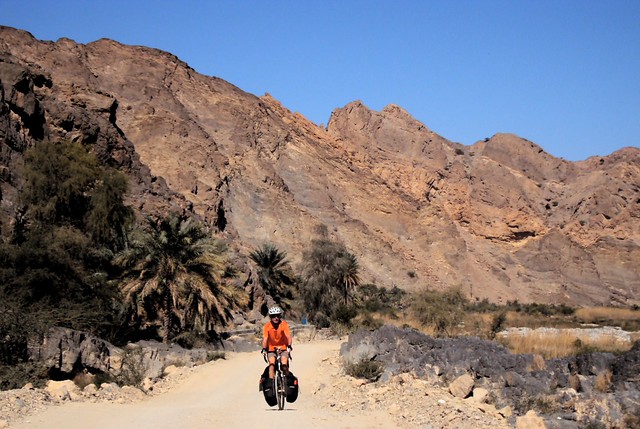 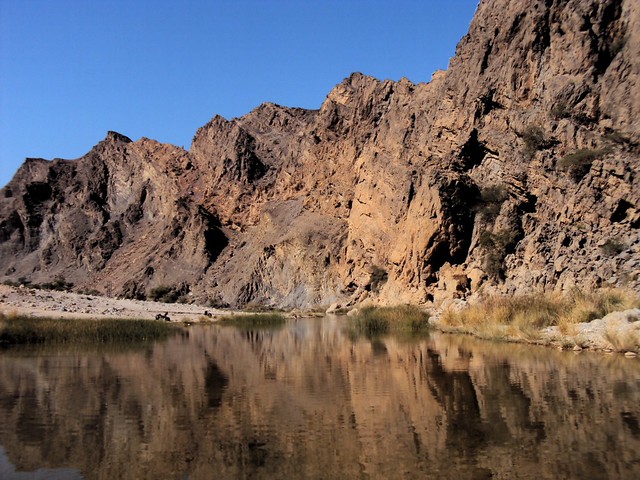 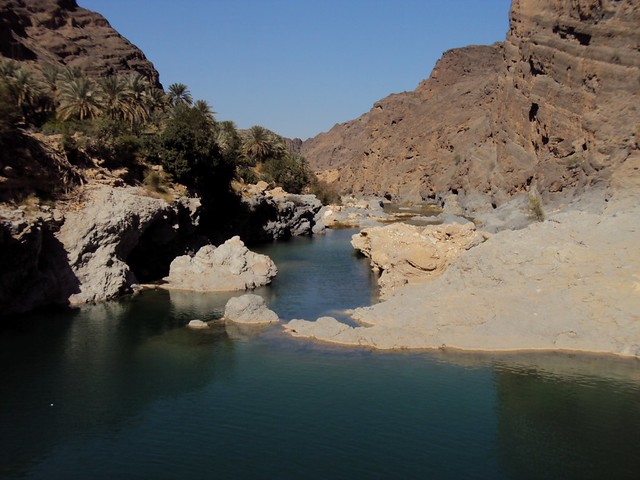 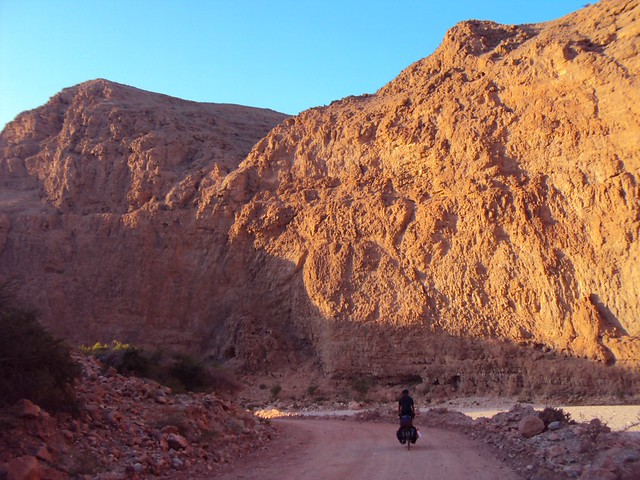 The riding wasn’t always easy and about halfway through that loop we got terribly lost and ended up on more incredibly steep roads.  After some sweat and toil and an extra night out, we were rewarded the following day with great dirt road riding to Al Mazari and the largest reservoir in Oman.  I felt a little vindicated of our navigation mishaps when I figured out that the osm data we’d been using was wrong.  A landslide had permanently closed the route we were trying to follow. 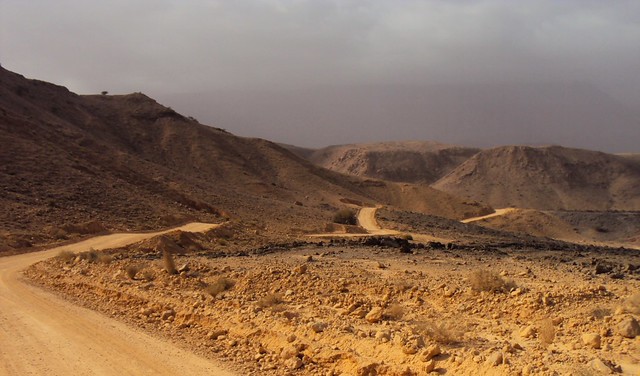 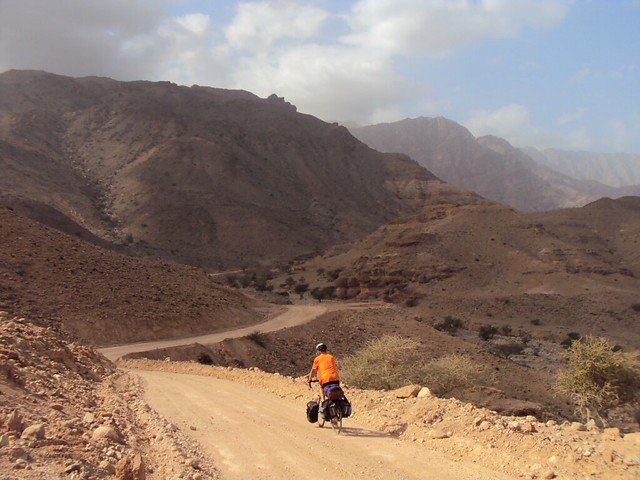 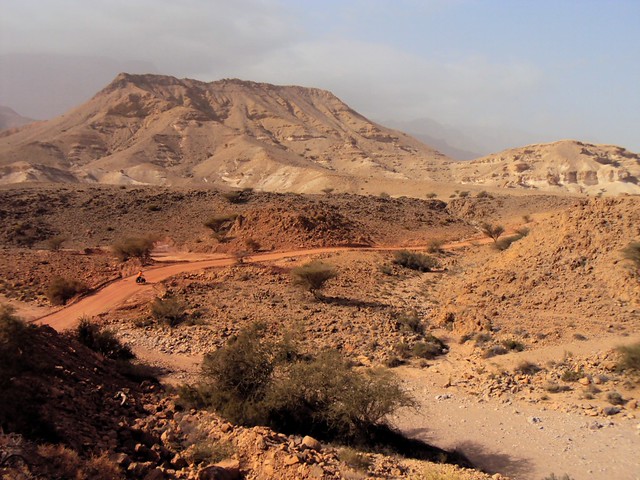 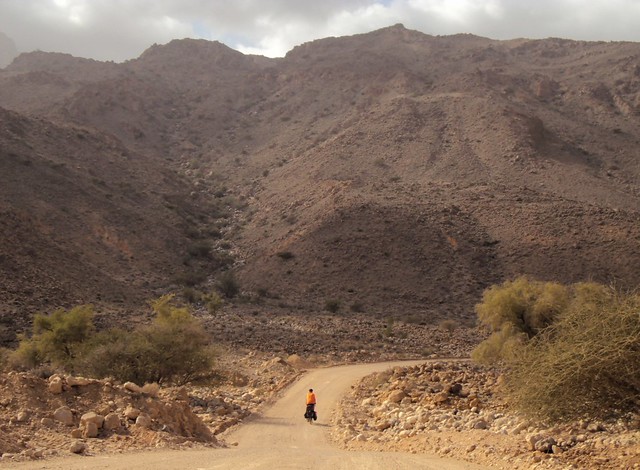 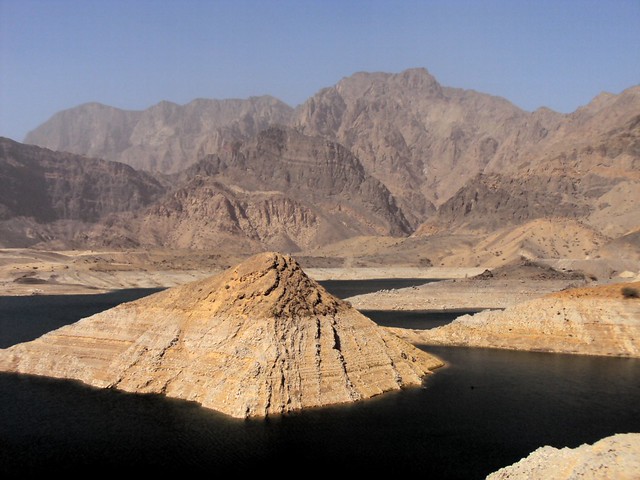 Even though we stayed at the Flamingo Farm, saw flamingos, and visited the fort with a fine, young guide, Rashad, it’s hard to recommend a visit to Qurayyat.  It is, however, one access point for beautiful Wadi Majlas, a short, fun ride.  Check out this melted layer-cake-like geologic formation referred to as “karstincation” on the explanatory sign. Water seeps into the limestone and dissolves it, causing the land to slip down. 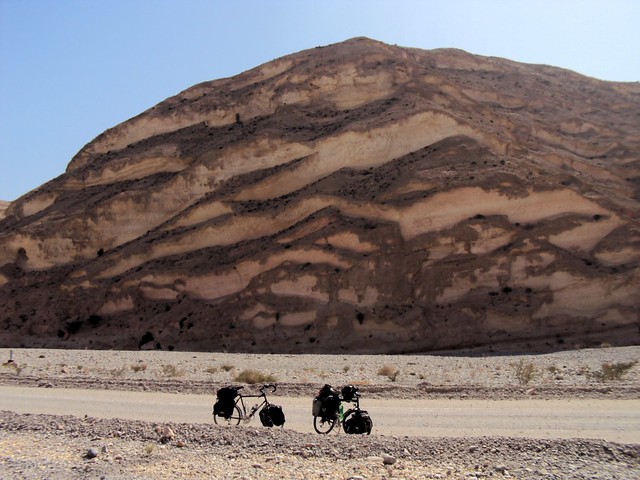 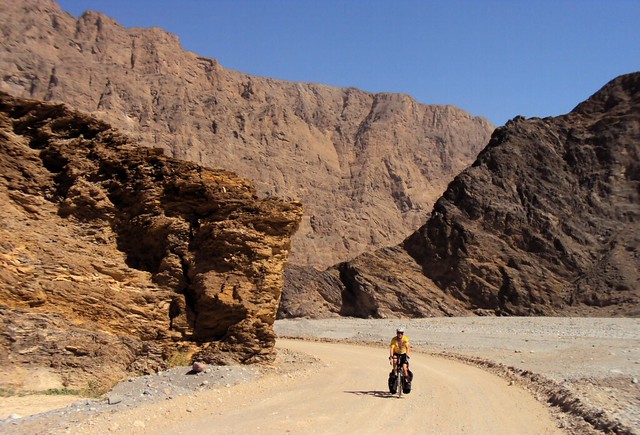 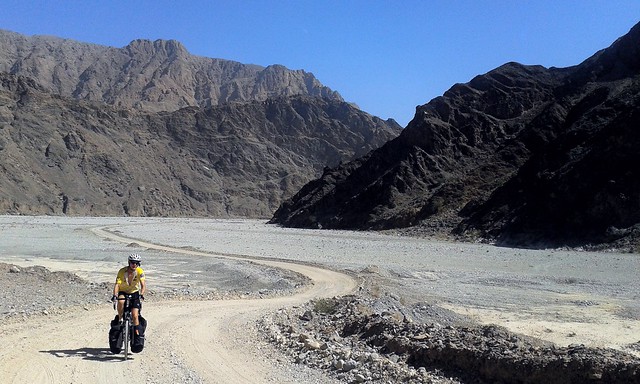 A little SE of Muscat at Al Khayran we found the good snorkeling we’d been hoping for.  We saw coral, sea urchins, sea cucumbers, lots of nudibranch, and even colorful tropical fish.  The highlight, however, was the bioluminescence.  At night we watched the small waves glowing a fluorescent green color as they rolled into shore. 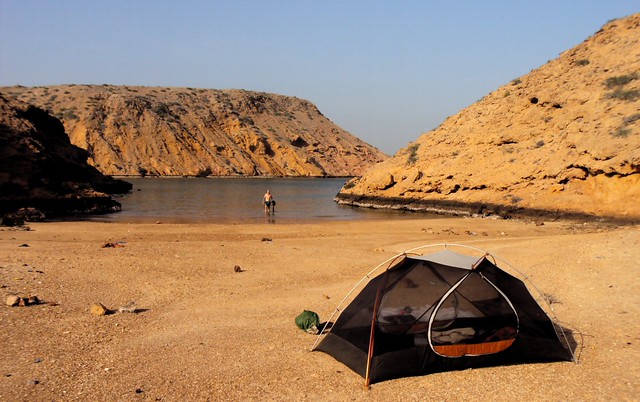 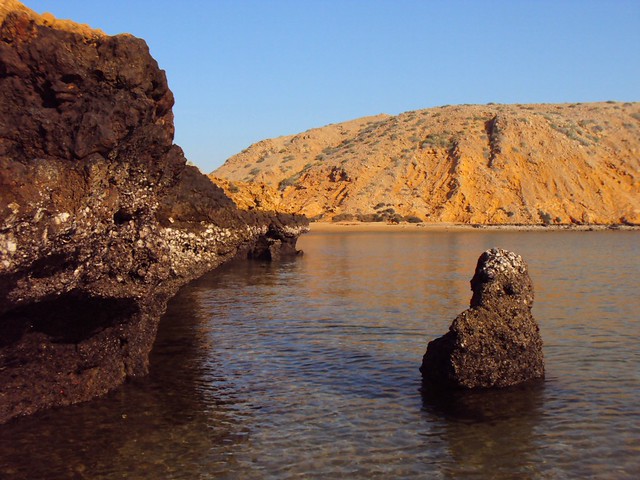 By this point Jack and I were having such great luck that we even found a quite, lovely road into Muscat, Oman’s largest city.  We visited the Sultan’s palace (from the outside only), took some photos of mosques, and enjoyed walking around the Mutrah souq and corniche before riding back to Stuart and Aslı’s house.  Jack flew back to the US, but I still had a little more riding before my flight to Turkey… 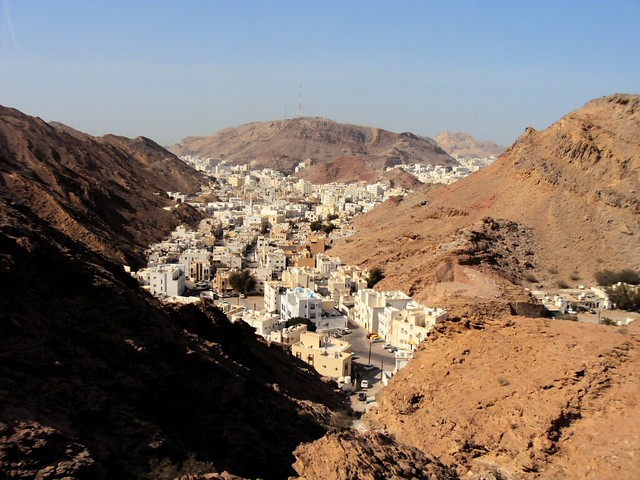 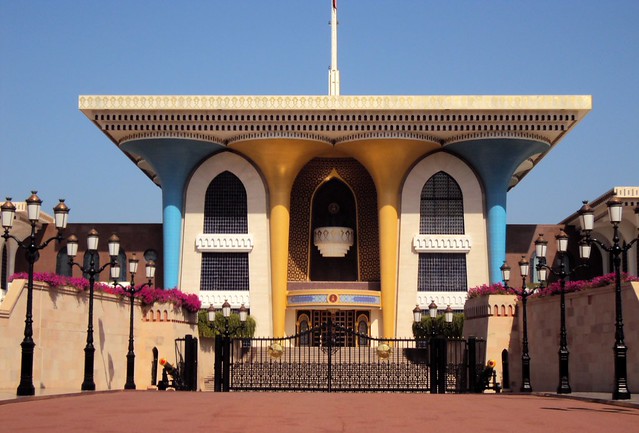 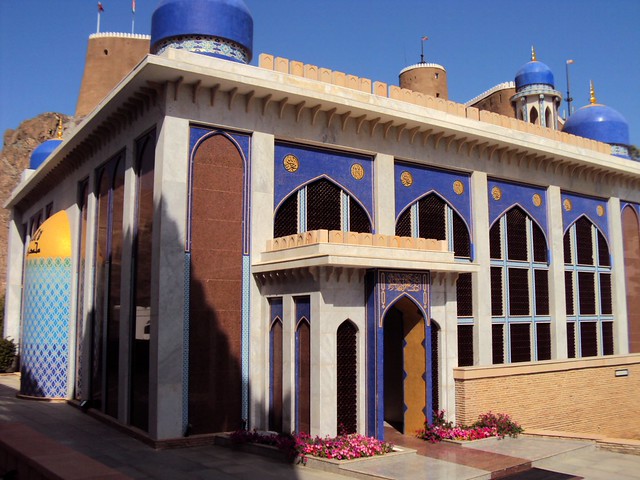 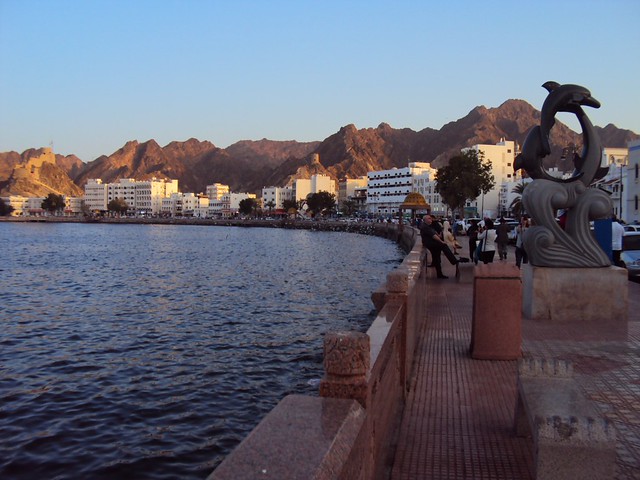