The United Arab Emirates isn’t on many folks bicycle touring bucket list.  Nor should it be.  It has all the problems of Oman that I described in my previous Oman posts — traffic, sprawling cities, migrant worker exploitation — but without the beautiful scenery and fantastic camping that are easy to find in Oman.

I crossed the border from Oman and spent my first day in the country visiting Al Ain, the fourth largest city in the UAE.  I was excited to be visiting a new country, and, well, the cultural sites of Al Ain even make it onto the UNESCO World Heritage list.  Why?, I wondered, after visiting the National Museum, Al Ain Oasis, and the Hili Archaeological Park.  The fort at the museum and the adjacent oasis felt a little Disneylandesque after having visited the real thing many times in Oman. 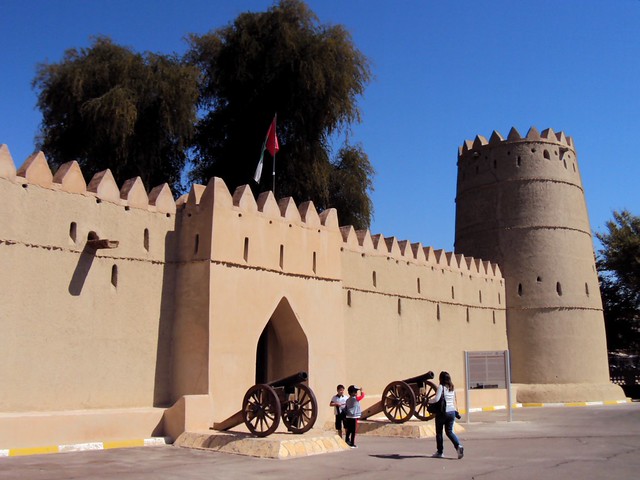 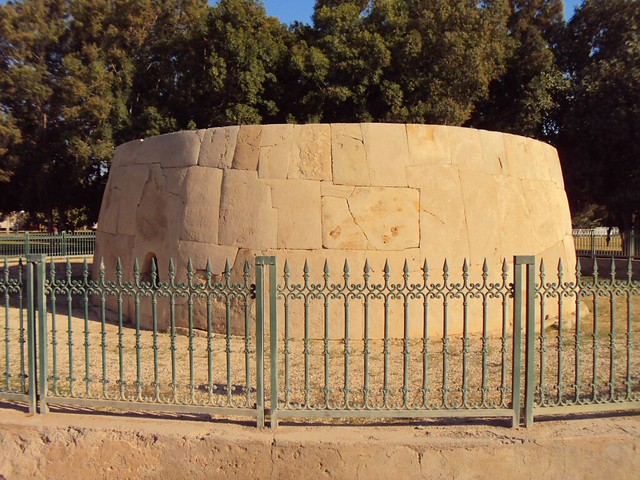 I pedaled a couple days through uninspiring desert before coming to the best thing I found in UAE, the small camel market at Al Liseli. 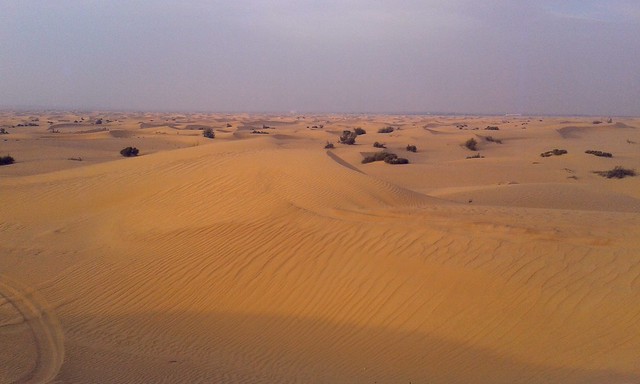 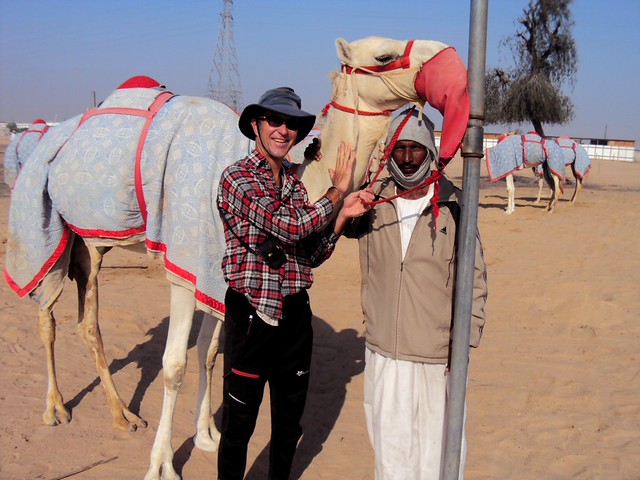 The Pushkar Camel Fair is Rajastan is so amazing that it could be worth planning your trip to India around the festival dates.  The camels at Al Liseli, on the other hand, were worth the 500m detour off my route.  I enjoyed the stop. 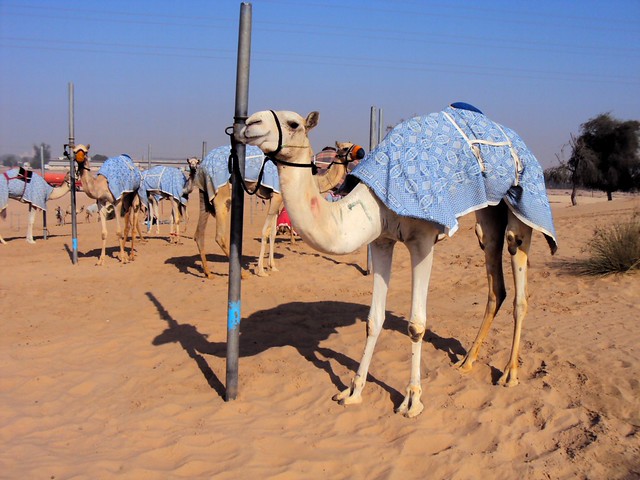 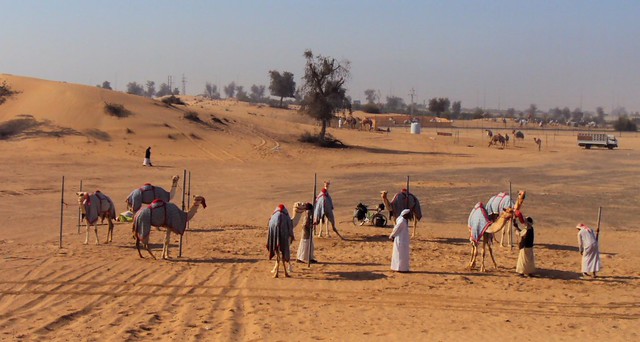 For my last night camping of the trip I was in the sand once again.  I started the next morning by following a promising bicycle path toward Dubai.  Nope, that was not to be.  After lots of meandering, often in the wrong direction, the path dumped me in suburbs with no option but to get on a huge highway to make my way into the sprawling city. 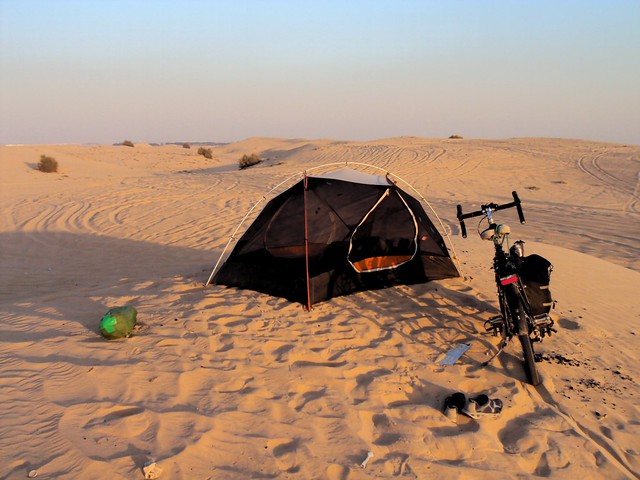 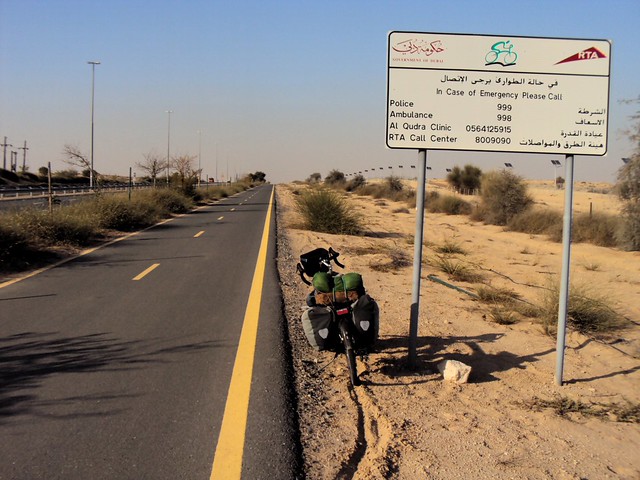 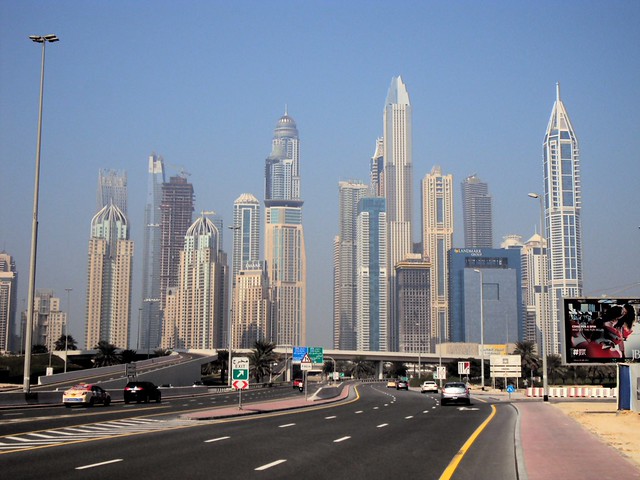 In my notes from my first day in the city, I wrote Dubai “is the most bicycle and pedestrian unfriendly place that I’ve ever seen.”  Indeed it’s really worse than anything imaginable.  Walking and cycling in Muscat and Los Angeles are pleasant by comparison.  If you don’t have a pocket full of dirham to take taxis everywhere, you’re pretty much stuck in your neighborhood.  So all those Indian construction workers that you see being transported in old US-style school buses from their housing to the construction sites?  Well, you’ll never see them anywhere else which could be exactly what many Emiratis want.

My short trip to the UAE was salvaged by the bicycle touring hospitality group, warmshowers.  I had hosted Silvio and Lena in Antalya last year and was hoping we might meet up in Oman.  We missed each other by one day in Yanqul, but Silvio insisted I contact Gautam, an Indian living in Dubai.  I never did meet Gautam, but I stayed four days on his yacht in the Dubai Marina, perhaps the most pedestrian-friendly neighborhood in the city.  The two Filipinos working on the yacht, Captain Jeff and JR, took great care of me.  I did some grocery shopping, and JR made tasty Filipino meals every night I was there — stuff like chicken adobo, beef bulao, and tinolo. 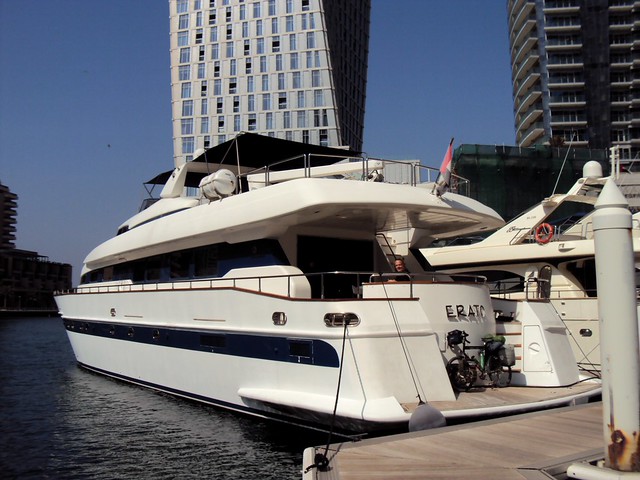 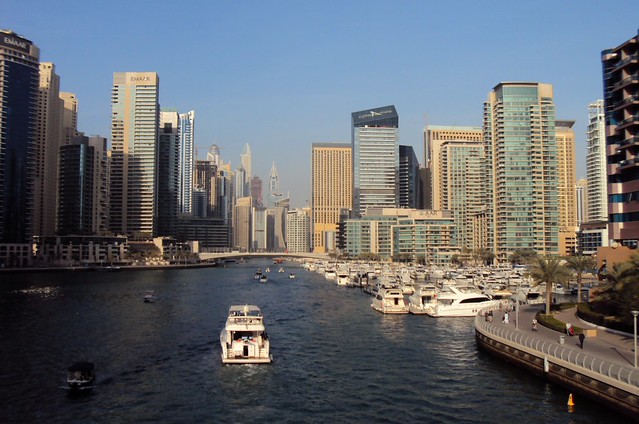 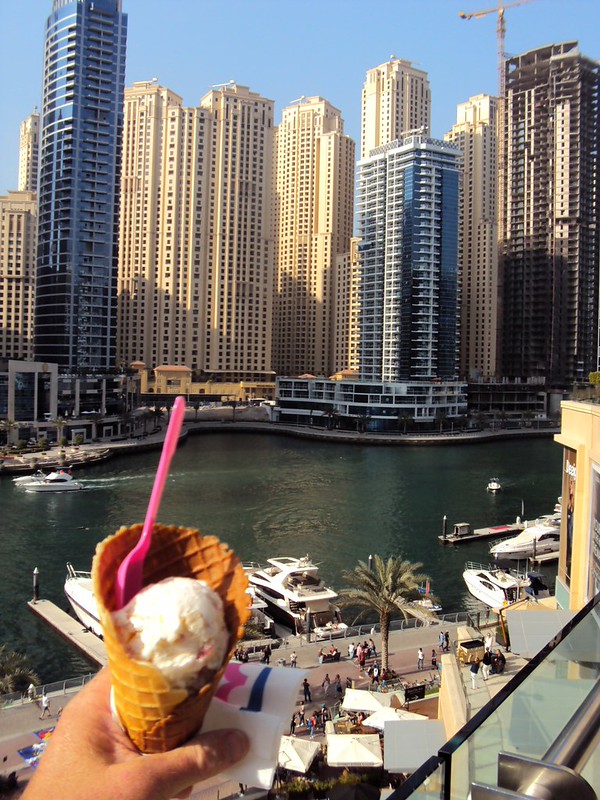 Of course I was curious what the famous Palm Jumeirah looks like from the ground — you know what I’m talking about, the palm tree island that’s so distinctive from the air.  Well, I found a public beach on the trunk, but the fronds are all private. 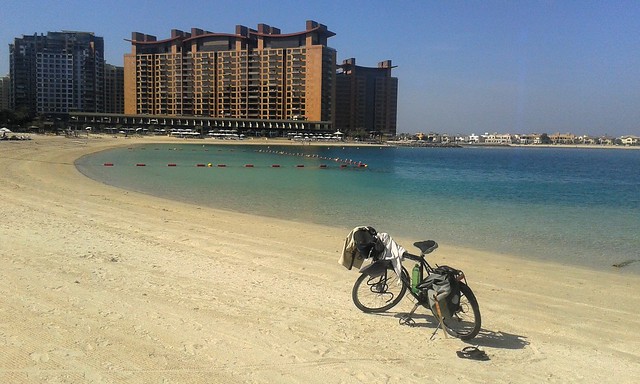 Here’s a view looking out from the trunk between two of the fronds: 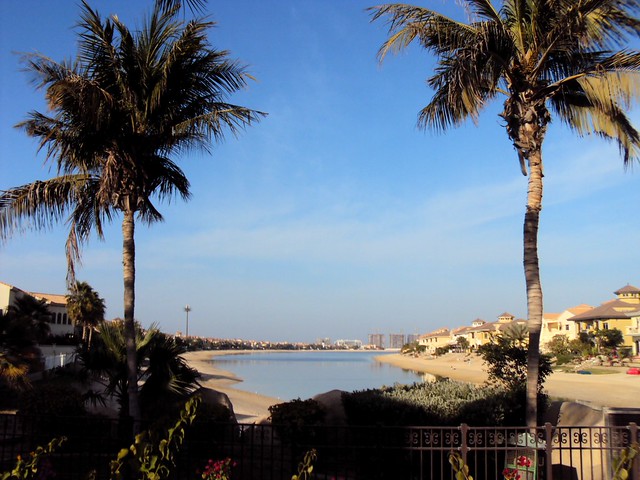 I rode my bicycle as far out the trunk as I could before I was turned around because of construction.  On the way back, however, I noticed that Frond N did not have a gate like the rest of them.  A bike’s pretty quiet so I was able to coast by the guard shack without the guard looking up from his smart phone.  That’s how you’re able to see this exclusive photo of Frond O as seen from Frond N: 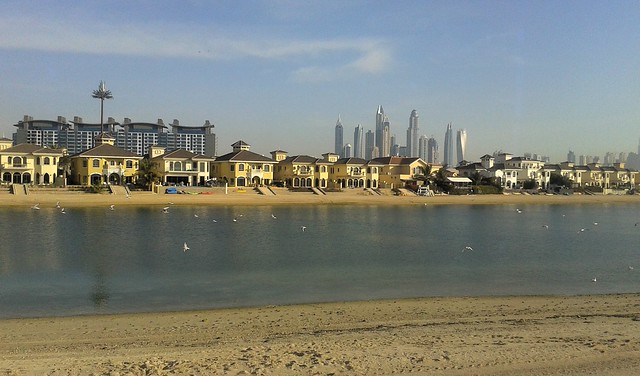 Wow, how exciting is that?!

And the last exciting thing is of this post is, of course, the Dubai Mall!

The mall is, well, a mall, though it has an ice skating rink and an impressive aquarium.  Next to the mall is the world’s tallest building, the Burj Khalifa, at over 800m tall.  I had heard mixed reviews, but I liked it.

And the best thing about Dubai?  Perhaps the underwater life photography exhibit at the Dubai Mall.  Check out this photograph from the Wakatobi Islands: 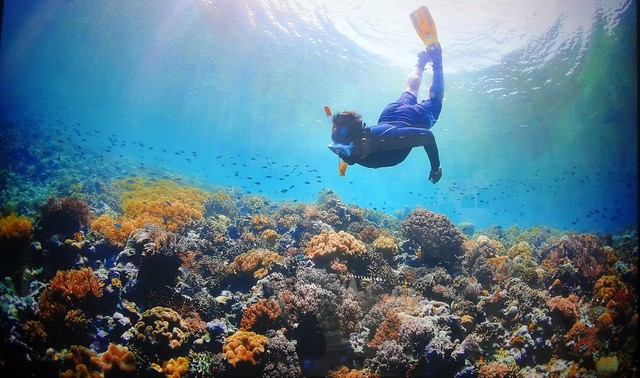 It gave me something to think about on my flight back to Antalya the next day. 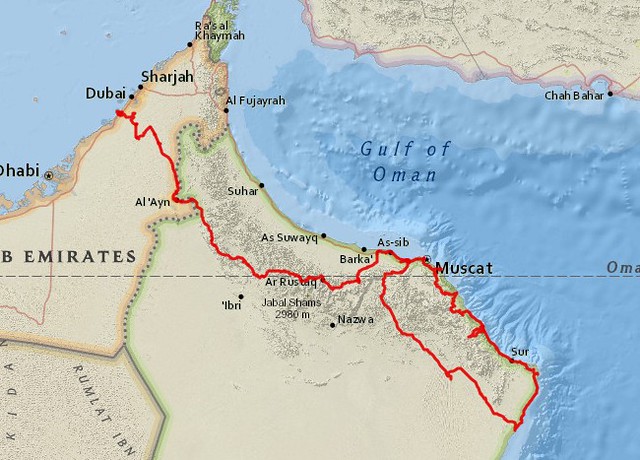