I’ve written before about bicycling around the rim of Güver Uçurumu, and my last post was about trad climbing at Kapuz Boğazı at the bottom of the Güver Uçurumu.  On this trip we decided to descend Güver Uçurumu Canyon directly.  It’d be possible and fun to follow the canyon all the way to Kapuz Boğazı, but you really need a dedicated driver to do that feasibly.  There’s no trail, and the road goes way around so even a bicycle shuttle would be rather inconvenient.

There were three of us this day, and none of us had done this route before.  Bekir and I had descended Ahmetler Canyon together.  We expected Güver Uçurumu to be much, much easier than that.  Well, it was easier than Ahmetler, but the Güver Uçurumu descent was more challenging and took longer than we expected.

The troubles started just finding the start of the route.  We ended up parking the car at Yukarı Karaman Mezarlığı which worked out fine.  However, I’m pretty sure there are better (closer) places to leave the car.  We weren’t far from the start of the route, but we walked quite a bit up on the rim of the canyon at the end of the trip to get back to the car.  As we started walking down the canyon, we expected to see the initial descent on our right.  Indeed it was, but even having been there before and keeping an eye out for the start, we managed to walk right past it!

We did this August, and there was no water flowing into the initial descent.  It’d be fun to do the route again when the start would be rappelling 50m down next to a waterfall.  We found the rappel bolts and were glad to have an extra 10m of cord to safely reach those bolts.  They’re well on the edge of the cliff.  I tied two 50m ropes together, threw one down, and was surprised that it didn’t hit the water in the pool at the bottom.  I knotted the end of the second rope and then pulled the first rope back up to put a knot in that end as well.  “Wasn’t the rappel supposed to be 50m?” we wondered.

Down I went, and sure enough with rope stretch 50m ropes are definitely long enough. 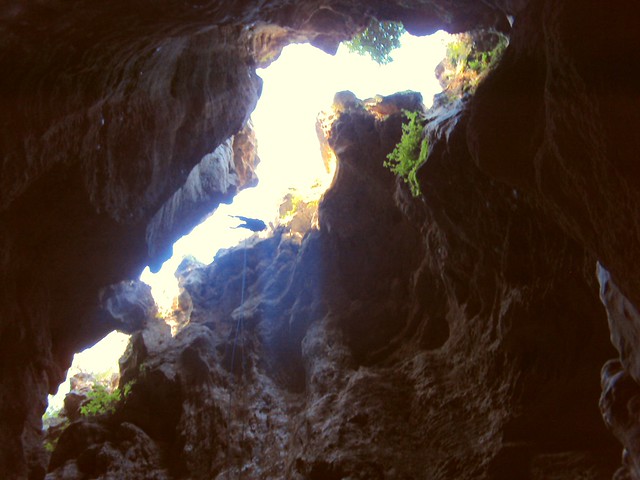 We started by rappelling into this pool: 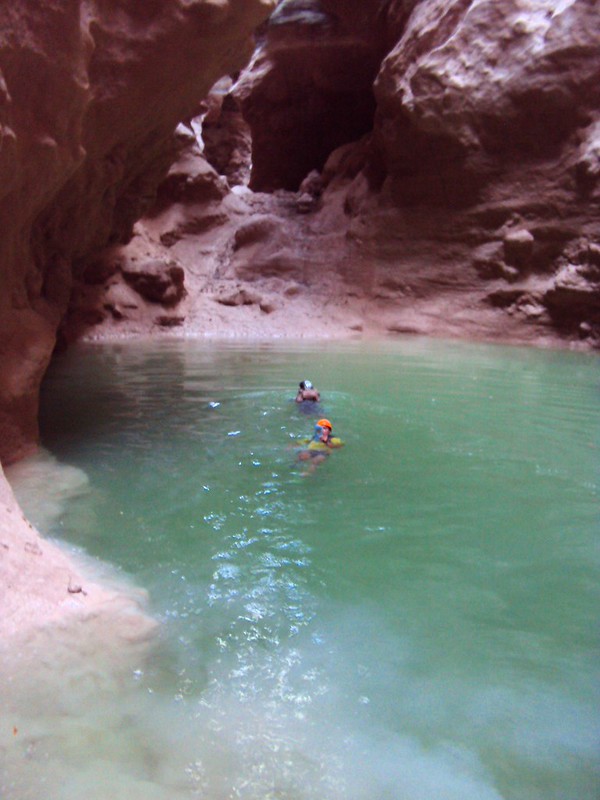 but the next couple hours were dry, hot, and at times dusty.  There was a lot of rock scrambling and careful down climbing.  I regretted not bringing better shoes. 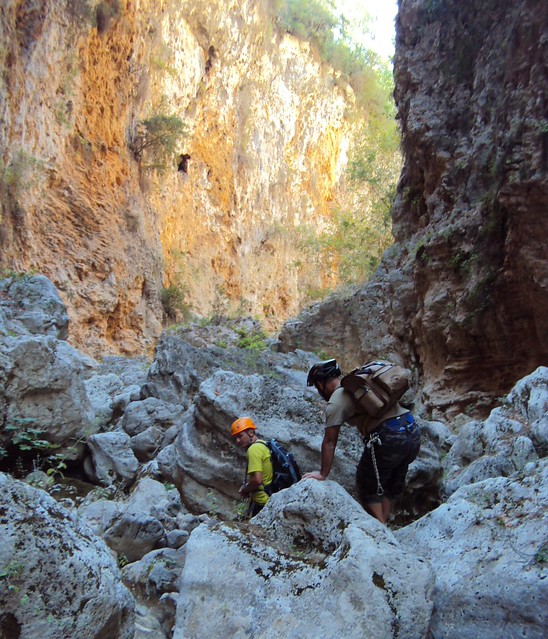 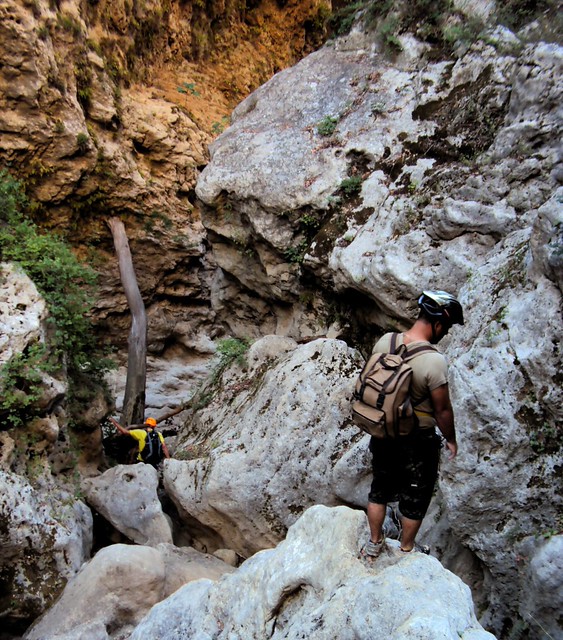 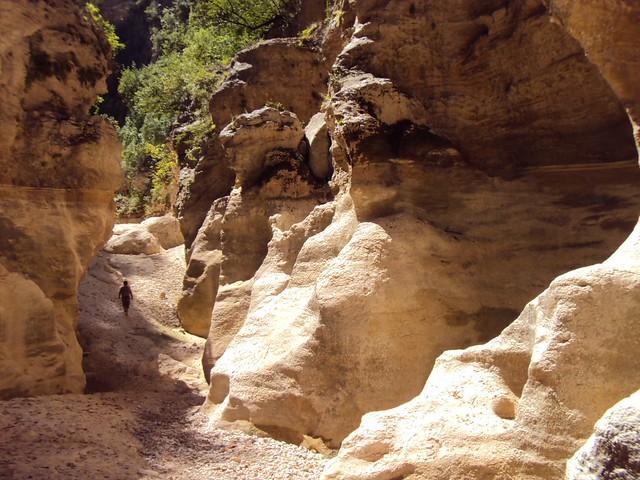 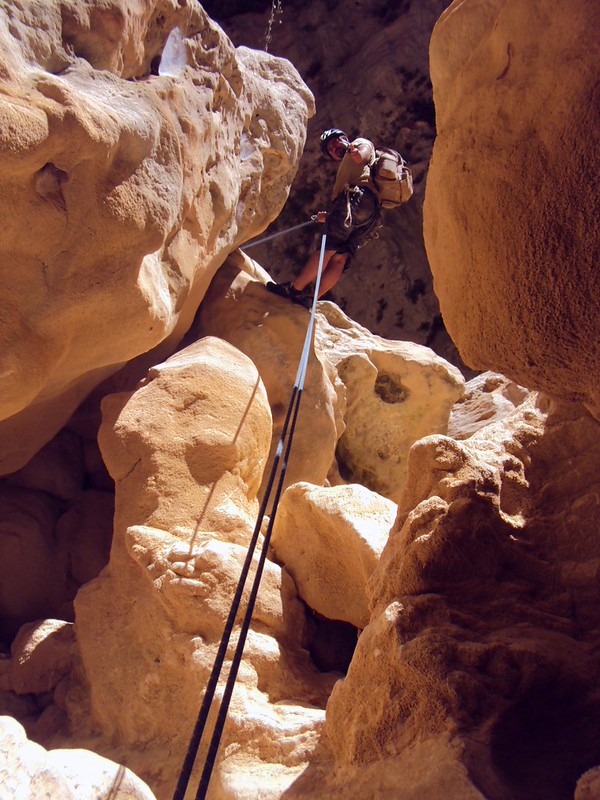 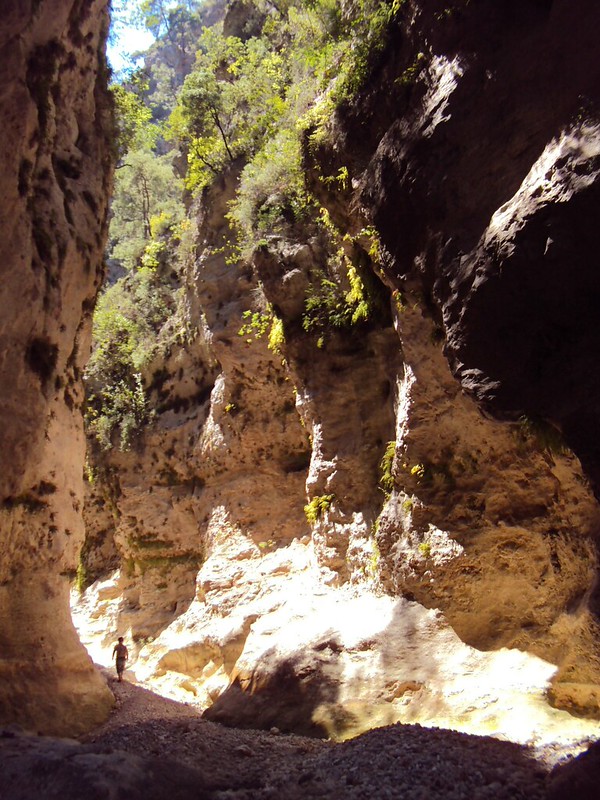 Eventually we came to water again, and that was some of the funnest part of the trip.  However, I have no photos since I had my camera in my dry bag the whole time.  We had to swim for a quite a long stretch, and the water was really cold.  The air temperature was 39°C that day, and I was shivering uncontrollably.  Once we finally got out of the water and starting hiking in the hot sun again, it took me half an hour to warm up!  Wow, I’d like to go back when there’s more water, but I won’t go again without a wetsuit.

Here’s a final photo as we’re walking along the old (Roman?) trail back to the rim of the canyon. 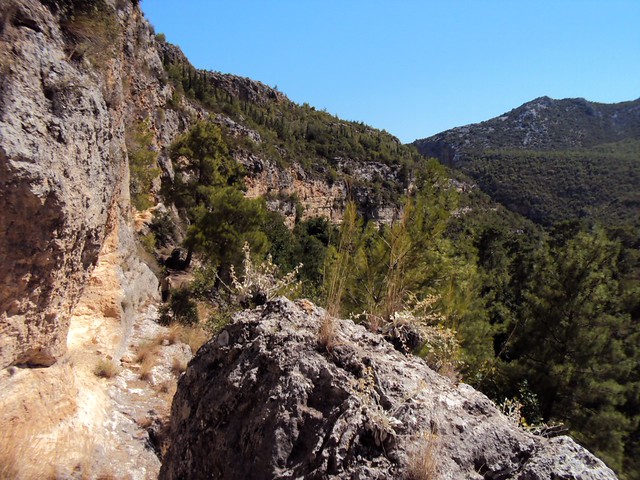 This entry was posted in Climbing, Turkey and tagged Güver Uçurumu. Bookmark the permalink.