The search “bicycle touring in sulawesi tenggara” yields only 30 results in Google, not one of which leads to a page where someone actually bicycle toured in Sulawesi Tenggara.  I guess maybe it’s “off-the-beaten-path.”  Given this dearth of information, we didn’t really know what to expect.  On the negative side, I expected heat and mosquitoes.  On the positive side, I was hoping for nice views, friendly people, and good food — pretty standard wishes for touring cyclists. 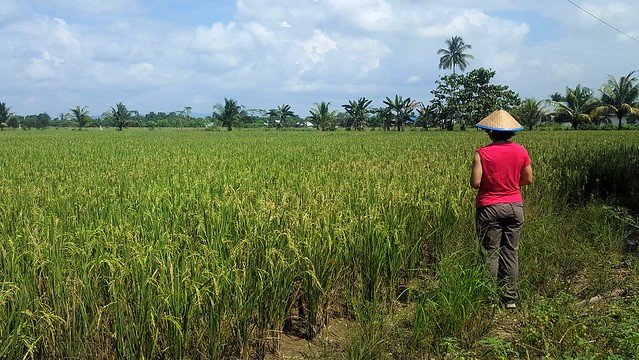 We were certainly pleasantly surprised by the lack of excessive heat.  It was hot between about 10am and 3pm if the sun was out, but that’s a big if — we had many, many cloudy days, keeping the temperature quite pleasant.  Mosquitoes were hardly ever a problem either.

As for the friendly people, well, we found lots and lots of them.  Many, many people wanted to take our photo.  An all too common greeting was “selfie, mister?” 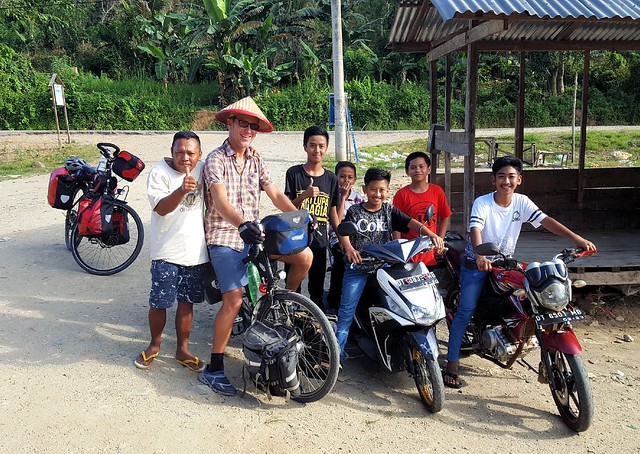 The biggest problem we encountered was the traffic.  The road network is poorly developed in Sulawesi, meaning that we were usually forced to ride on the main road.  I think often there’s not too much traffic, but we started our cycling on the last day of Ramadan fasting, in other words, the start of the busy Ramadan holiday.  In Turkey those are some of the worst days in the year for traffic, and I think Indonesia is no different in that regard.

Another problem during these first few days of our trip was that most restaurants were closed because of the holiday.  On the first day of the holiday, just before a climb over the mountains that run north-south down the Sulawesi Tenggara peninsula, we were happy to see an open restaurant.  In our broken Indonesian we asked about food and were showed to help ourselves to the prepared food already on the table, buffet-style.  We asked about drinks and a place to wash our hands as well.  After eating we hung out in the shade for another hour since that was one of the sunny days.  When we went to pay, the woman said, “no, no, no.”  Well, it turned out we weren’t at a restaurant at all.  It was the woman’s house!

That kind of generosity is common in Indonesia.  In two months I don’t think we met a single unfriendly Indonesian.  It’s only the constant photos, as if we’re celebrities, that can be hard, particularly when we’re tired. 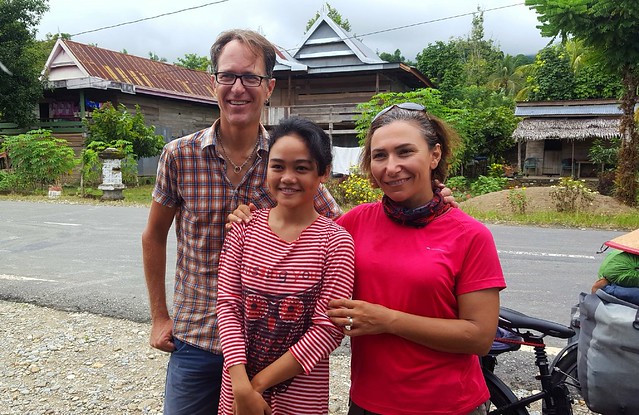 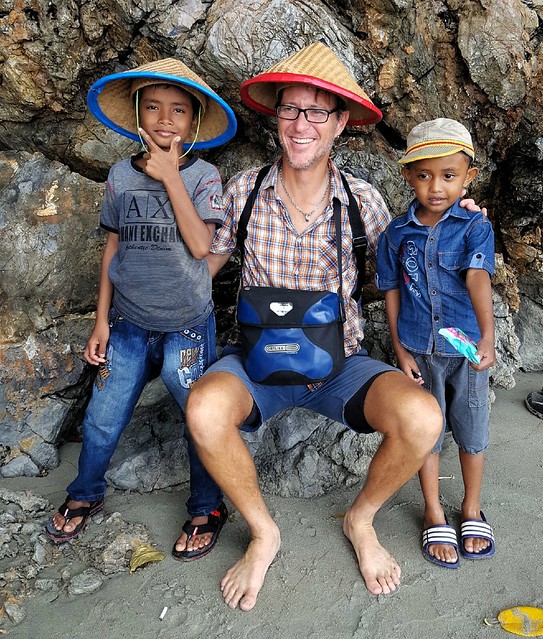 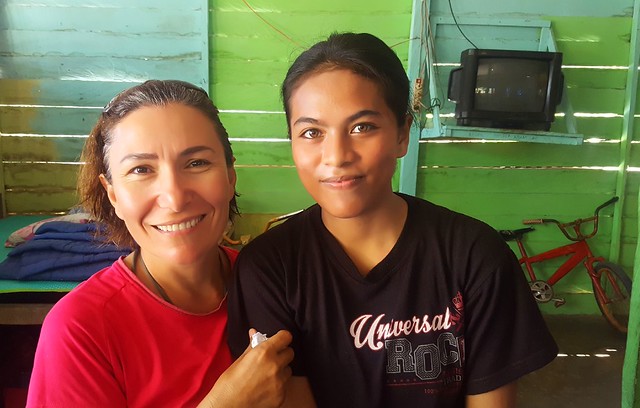 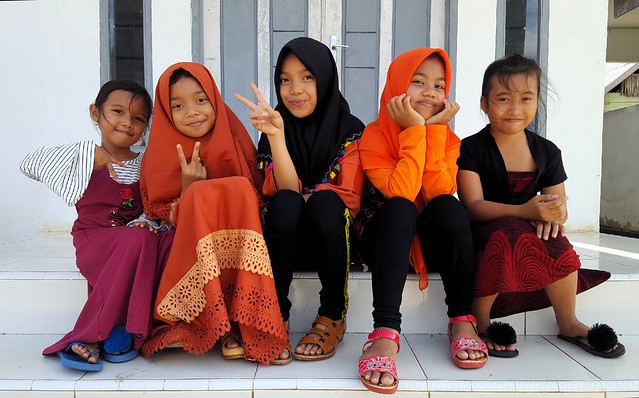 These two families helped us find places to stay for the night: 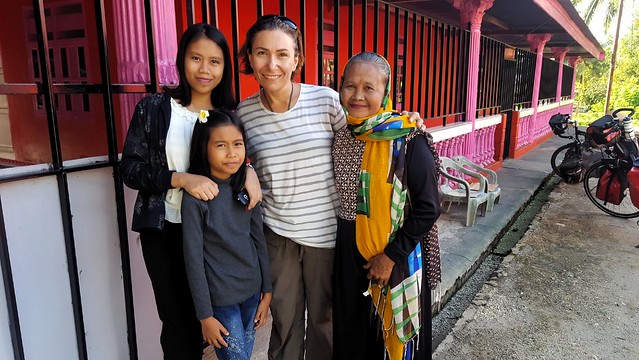 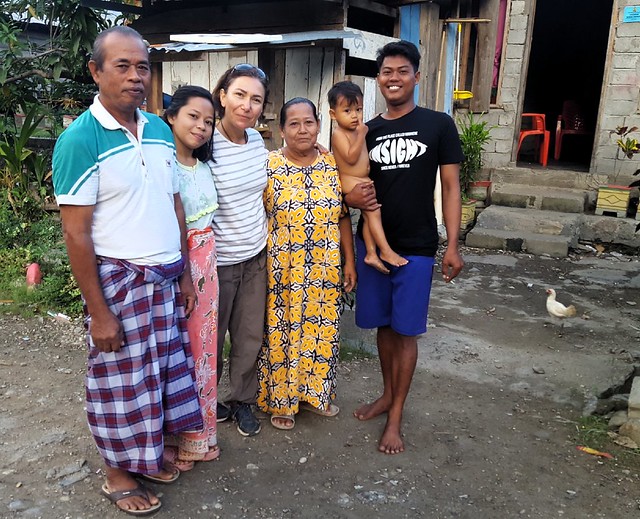 We had a pretty hard climb between the crowded (because of the holiday, I think) tourist sites of Tamborasi (the world’s shortest river?) and Danau Bira, a beautiful limestone sinkhole, like you might expect to find in Yucatán.  In our sweaty, tired state Ferda couldn’t deal when this group overwhelmed us with “photo, photo”.  “Wait, wait,” she said, visibly irritated.  I simply sat down and started eating everything they offered (which turned out to be a lot when I just kept eating!).  After filling our stomachs and cooling down a bit, we posed for the requisite photos. 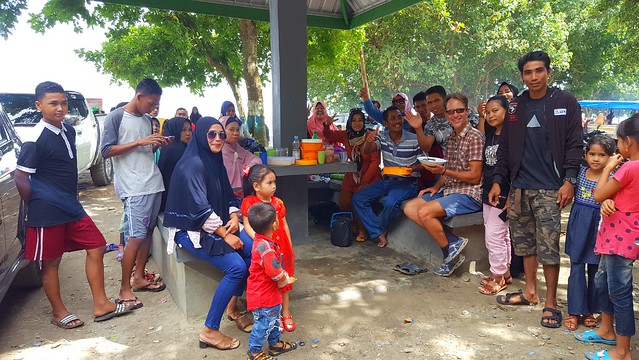 As for the good views, well, they were a bit more difficult to find than the friendly people.  Much of the road was continuously lined with houses.  It’s not like Turkey (or Tamil Nadu for perhaps a more fair comparison) where people live in compact towns surrounded by uninhabited land.  No, it’s largely built up along the road but only one building deep.  I was impressed with how intact the forest was in spite of the road and people.  We even saw large groups of monkeys in the forest right next to the road a couple times.

Of course, we tried to take photos of the best bits. 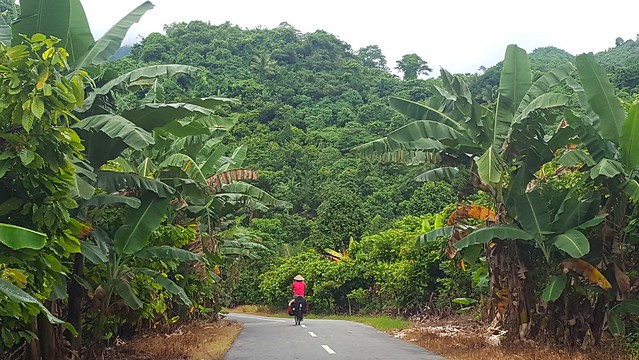 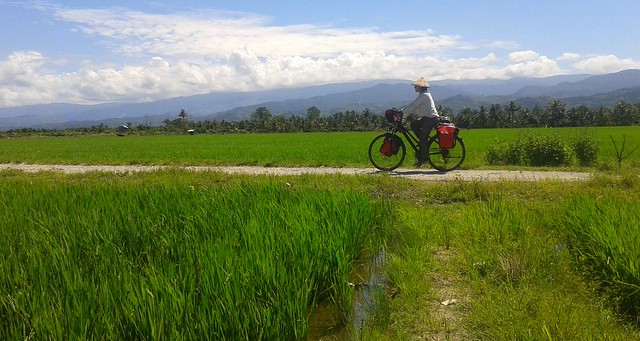 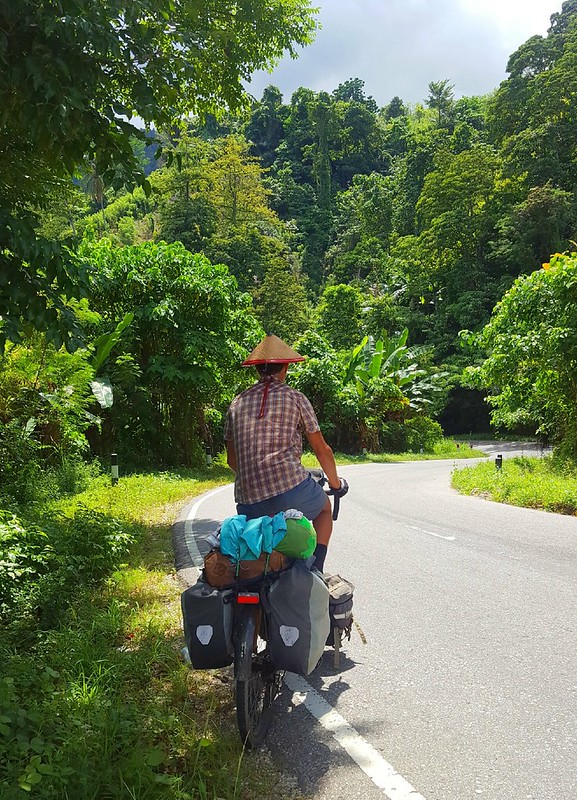 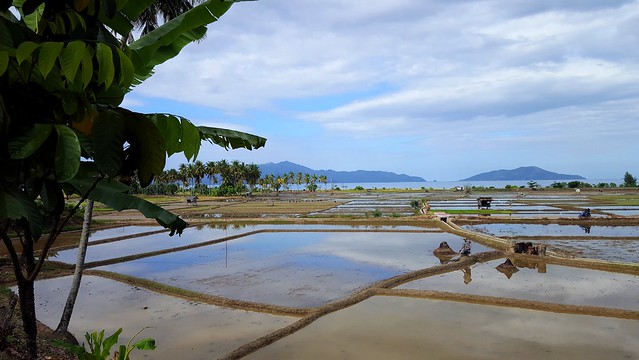 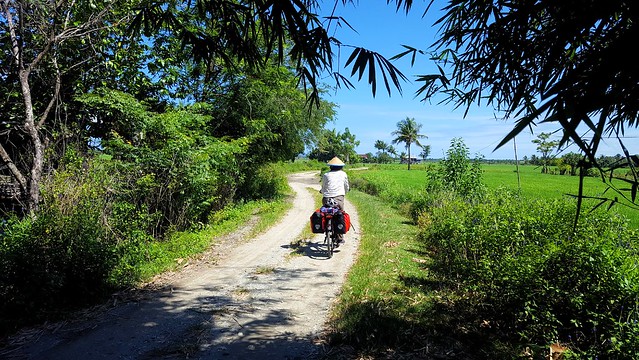 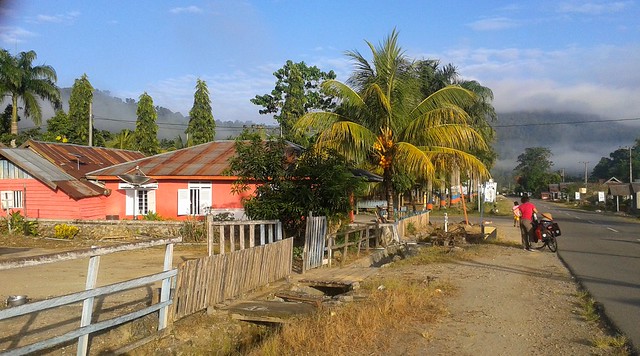 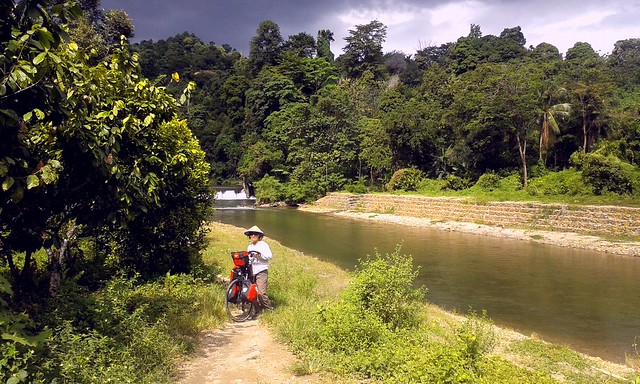 was some shade and a place to swim in the river.  We hung out for a few hours in the middle of this sunny day. 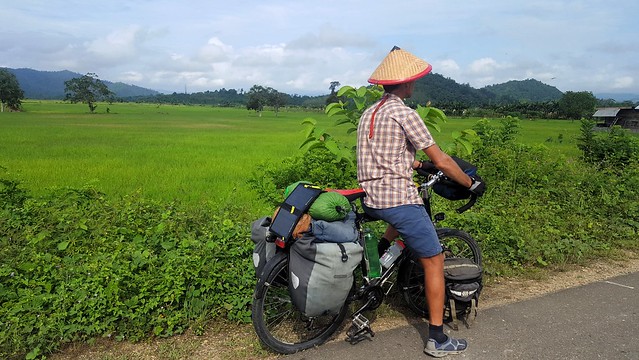 We passed countless rivers, many of which looked like they’d be fun to explore.  It reminded me of the Kerala backwaters, but tourism isn’t developed in Sulawesi like it is there. 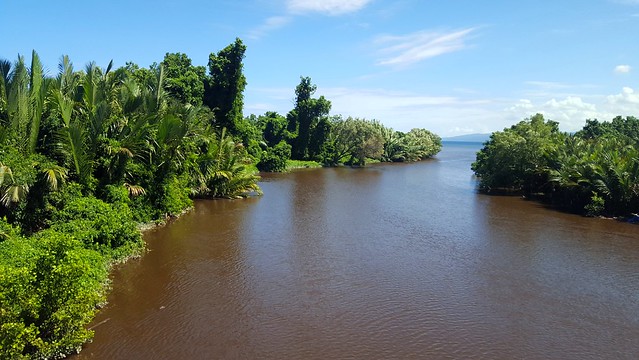 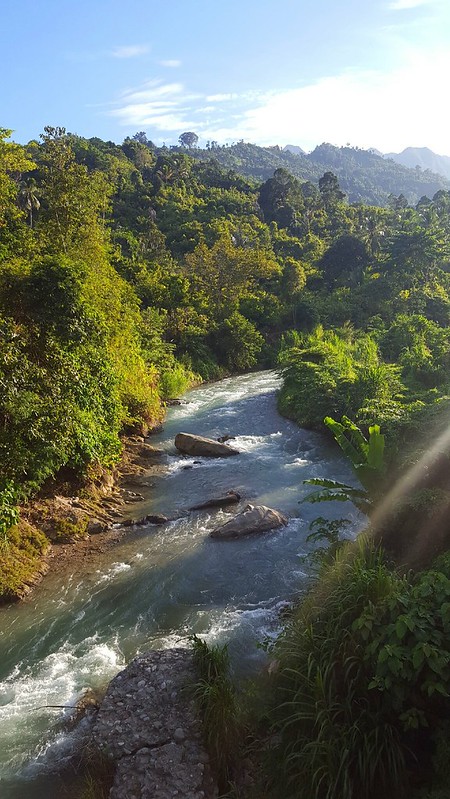 The food, like the views, wasn’t always stellar.  We did find this fantastic buffet at Mas Hadi in Lasusua: 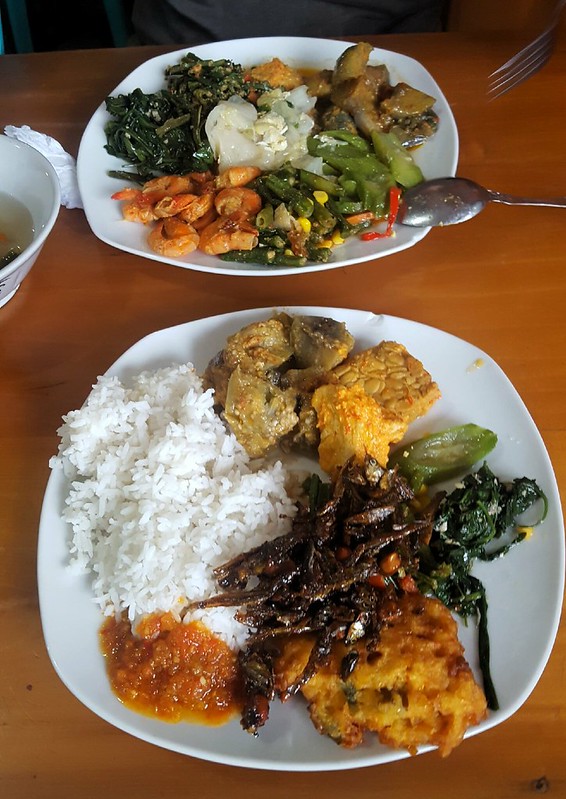 but that was the exception rather than the rule.  In the more rural areas the only thing available was instant noodles.  At slightly bigger villages we’d find rice, noodles, and chicken or fish.  That’s it.  The food highlight was definitely the fruit.

Most common were coconuts which we also drank and ate frequently during our first month in Sulawesi on the islands.  Here they’re cut open, and the flesh is dried for export to India: 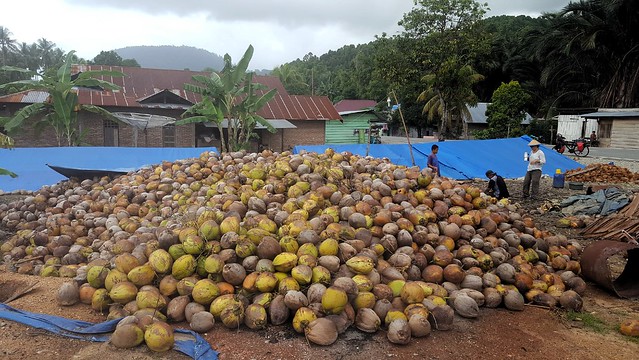 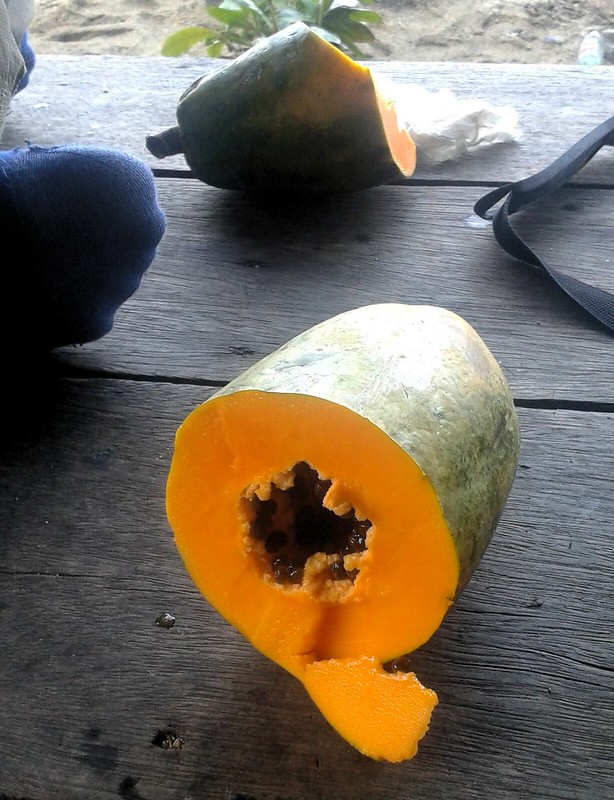 These are rambutan and dragon fruit.  We later learned that the dragon fruit sometimes have white flesh.  We preferred these pink-purple ones. 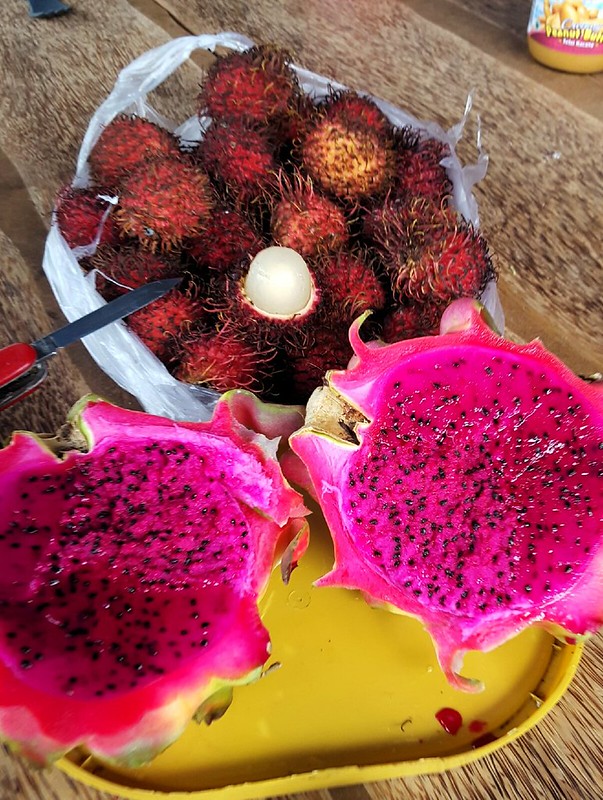 At one small hotel a man offered us a giant ugly brown fruit covered in ants.  It’s sirsak, he said.  Ok.  We cut into it, and, wow, yummy white sweet flesh.  How can there be a such big yummy fruit that I’ve never even heard of before?, I wondered.  Well, I looked it up later, and it’s called soursop in English, guanábana in Spanish, is native to the Americas, and widely available in Mexico.  Go figure. 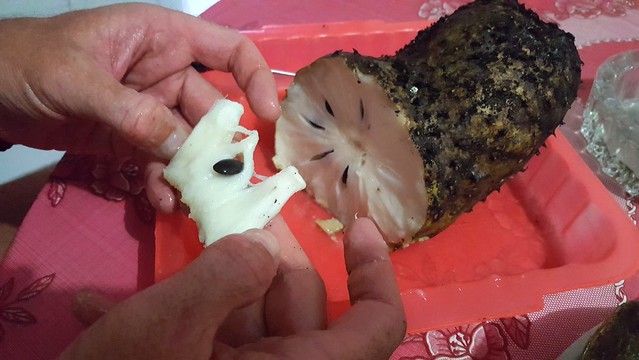 Jackfruit was harder to find than sirsak.  We came across one at a roadside fruit stand.  It weighed 11kg — not something we wanted to add to our load!  The idea is to eat the sweet, slightly stringy yellow fresh. 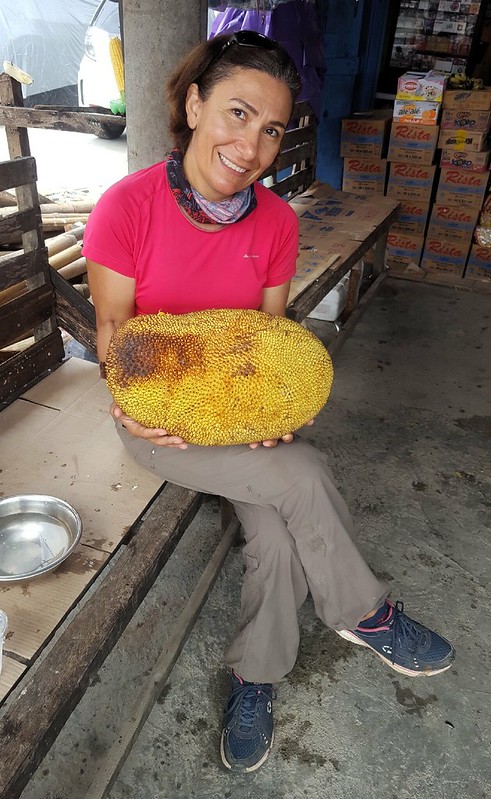 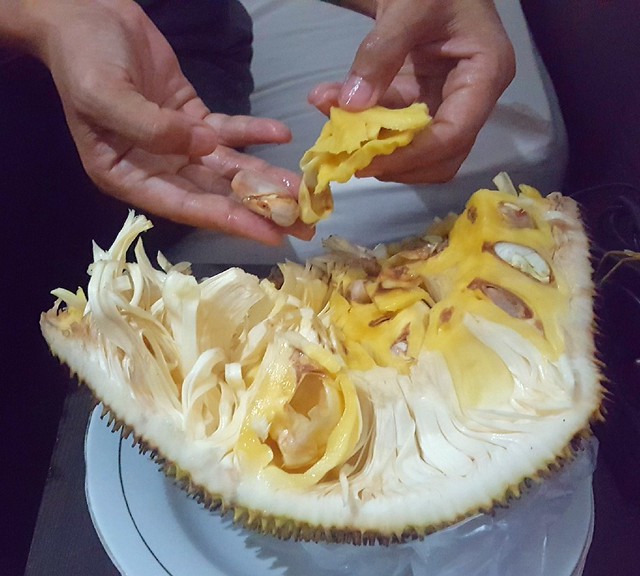 And the king of the fruit?  Well, our favorite was the durian.  You eat the yellow-white flesh around the large seeds. 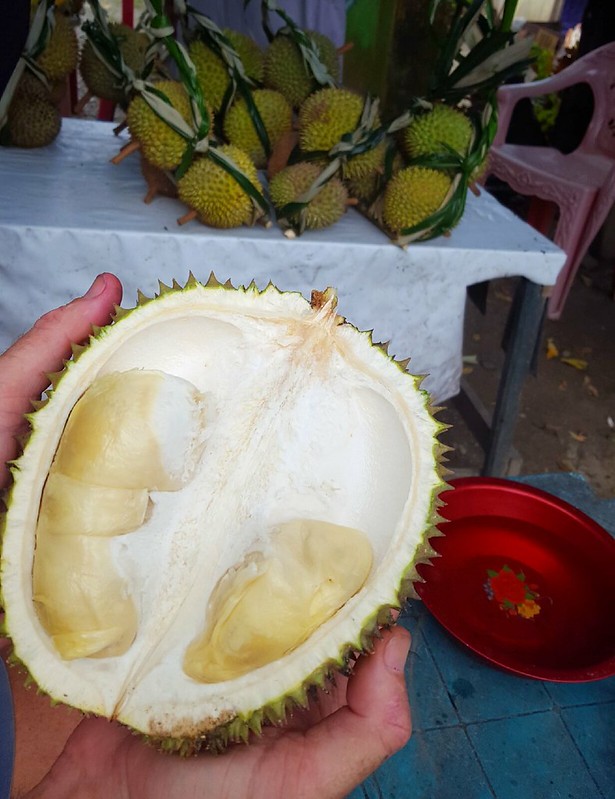 They’re fairly big and heavy, and the thorns are really sharp.  They’re often wrapped in groups of three like this: 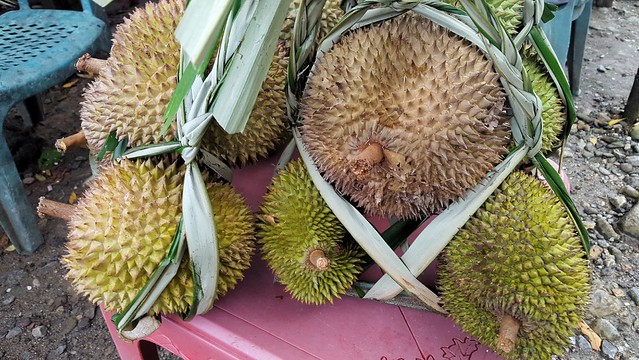 The highlight of many of our days was sitting on the side of the road, eating our daily three durian.  The custardy sweet flesh put us into a trance so the only thing that existed in our world were creamy durian flavor explosions.