Konya and the whirling dervishes

Konya, wow!  How come I had never been here before?  It’s not far from Antalya, and for a number of years Ferda and I had looked at the schedule for the annual Şeb-i Arus festival to try and coordinate a trip.  However, I feel like people dis Konya a lot which is one of my excuses for having not been before.  I have to thank Tommy for inspiring us to go this year.  When he was visiting us in Antalya, he talked about heading to Konya next to see the whirling dervishes.  In the end Tommy didn’t go, but he put the idea in my head.  Thanks, Tommy.  Konya’s a great place to visit.

Şeb-i Arus Festival, also known as Mevlana Festival or Rumi Festival or Whirling Dervishes Festival — take your pick!, not surprisingly attracts lots of Iranians.  Born to Persian parents, Rumi wrote most of his poetry in Persian.  In Shiraz I remember being impressed with how the Iranians could recite Hafez’s poetry from memory.  I bet they do well with Rumi also.  However, it’s not just Iranians — we talked with Japanese (from Fukuoka where Ferda and I had been less than two months earlier!), Malaysians, a German woman, and an Afghan man all in Konya for the festival.  I had no idea to expect such an international crowd.

Ferda and I squeezed this trip in between a couple other commitments and only spent two days in Konya.  That’s not enough.  You need at least three days, more if you want to attend workshops, classes, or discussions about Sufiism, Rumi, and related topics.  Another mistake we made was not going to the new Panorama Müzesi first.  There we found the best overview of Rumi’s life and also interesting information about Selçuk symbols that we had seen in other museums and mosques in the city.  The internet reviews of this “wax museum” aren’t great, but there really is some good information here.

For example, at the Taş ve Ahşap Eserleri Müzesi (Museum of Wood and Stone Carving) which is housed in the handsome İnce Minare Medrese: 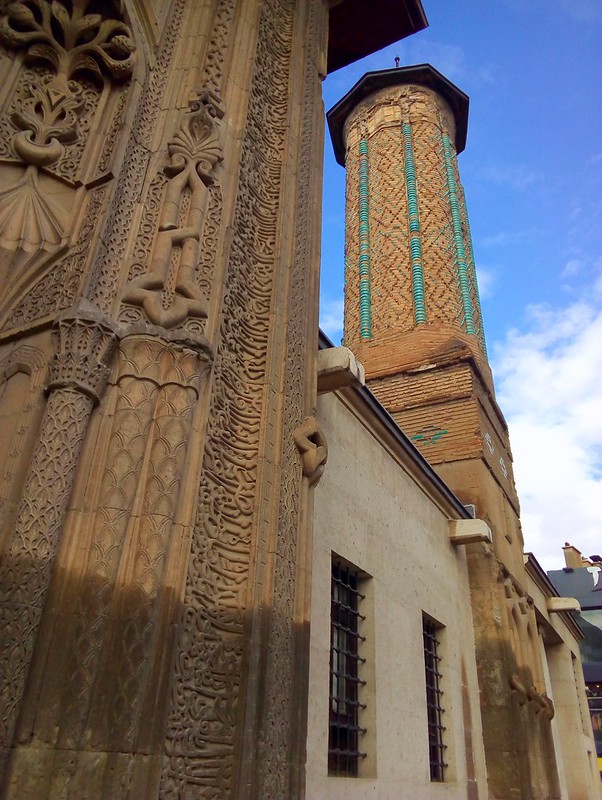 which happens to have some nice tile work: 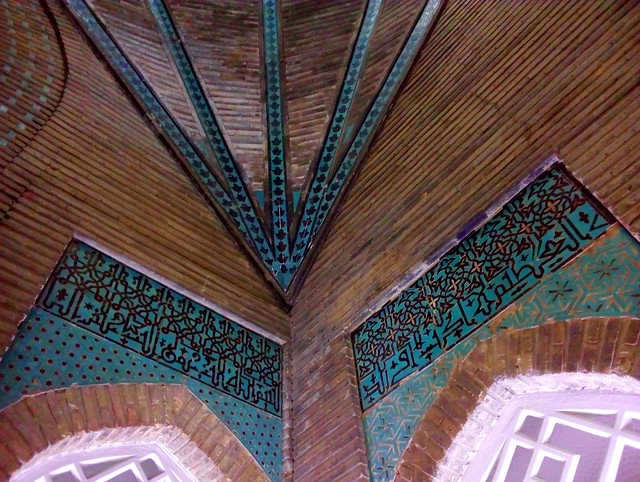 Ferda and I came across this unusual 15th century Selçuk carving of a winged angel: 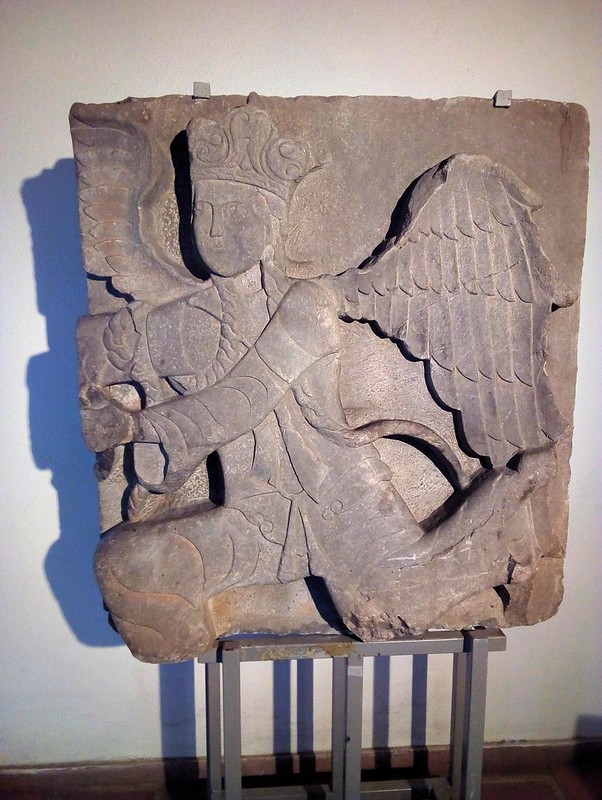 At that museum we couldn’t find any information about the carving or its meaning.  However, the Panorama Müzesi put together this panel (with an attached explanation) which includes at least six Selçuk motifs found locally, three of which are in the İnce Minare Medrese.  See the winged angel on the right?

The angels help people and represent goodness according to some researchers.

I also wish I had read the Panorama Müzesi’s summary of Rumi’s life before visiting the Mevlana Müzesi which is home to Rumi’s tomb.  The Mevlana Müzesi is housed in another nice building which was used as a dervish lodge (tekke) before it was turned into a museum. 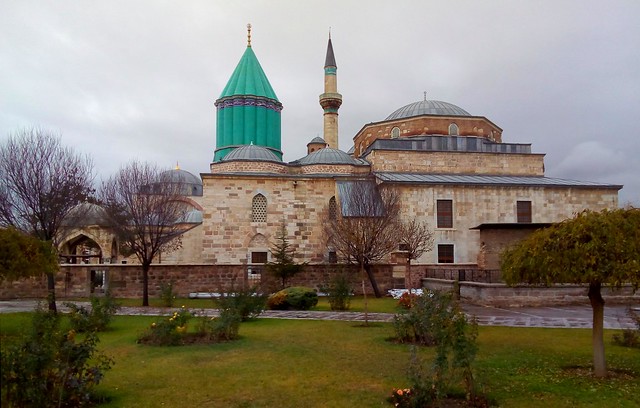 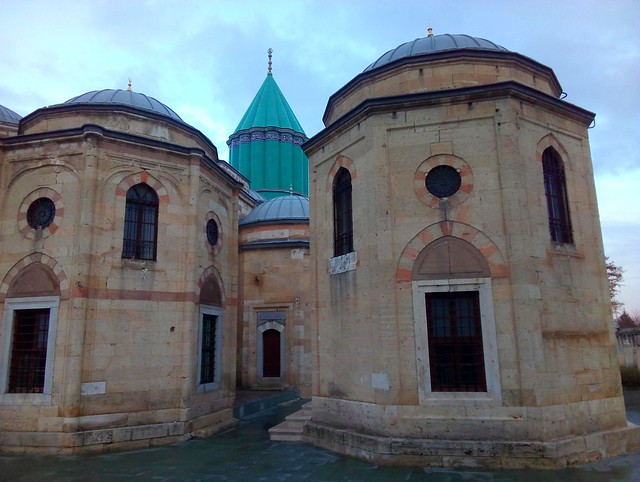 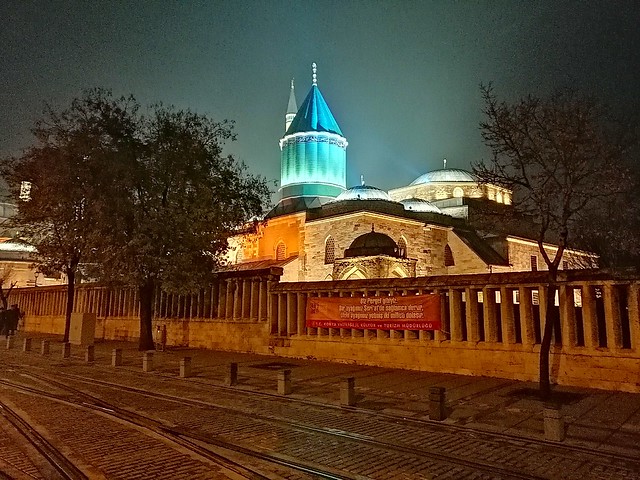 There are exhibits showing how the lodge was used by the dervishes, their clothes, books, and instruments, but precious little information about Sufiism or the Mevlevi dervish sect.  Indeed, I couldn’t find this information anywhere in Konya.  Maybe you need to attend one of the specialized workshops.

Most people come to the museum to pay their respects to Rumi at his tomb, shown here: 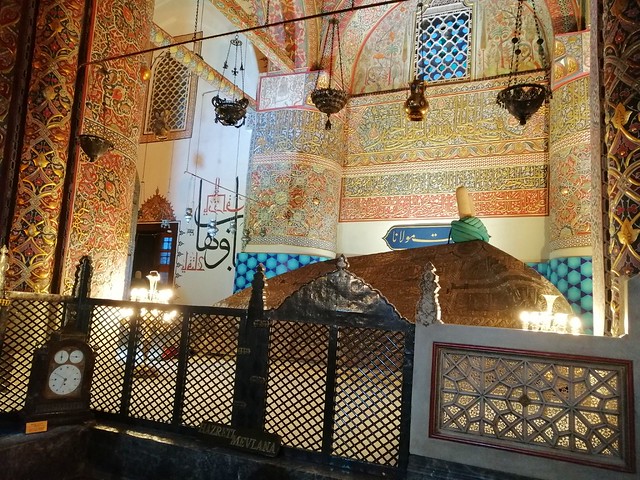 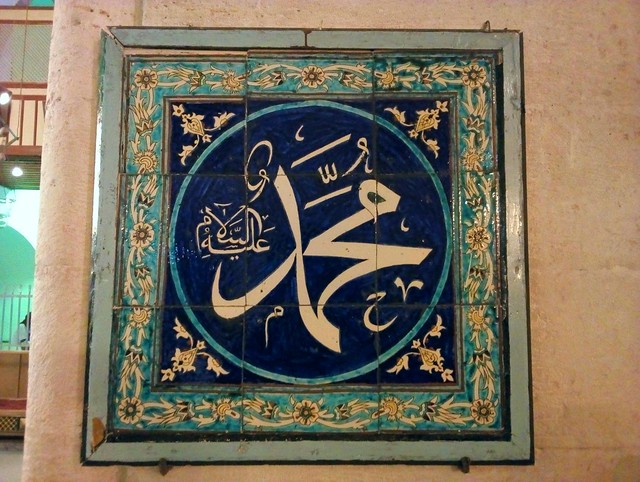 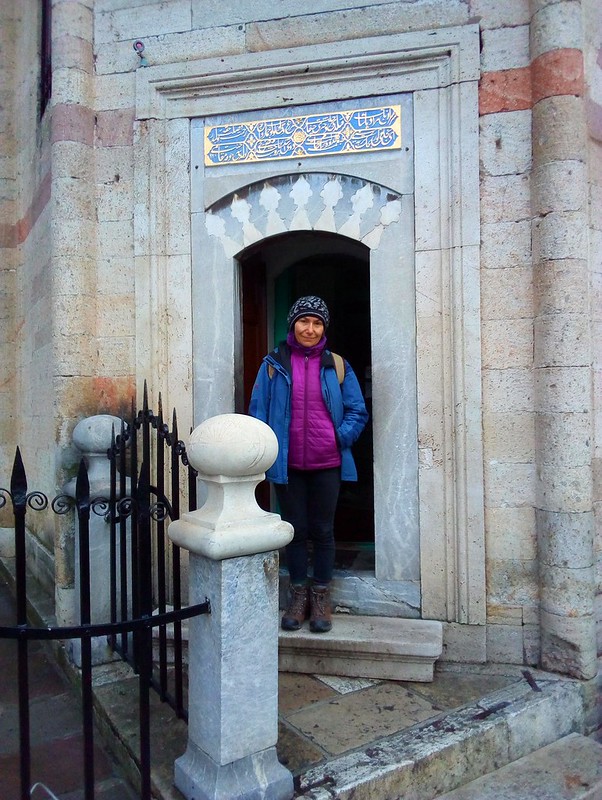 I was surprised how crowded it was.  People were reverent and respectful.

The 12th century (Rumi lived in the 13th century) was Konya’s golden age when it was the capital of the Selçuk Sultanate of Rum.  There are lots of interesting historic buildings around.  However, as the Phrygian, Persian, Hellenistic, Roman, Byzantine, and later Ottoman civilizations were all here as well, it’s hard to keep track of just what you’re looking at. 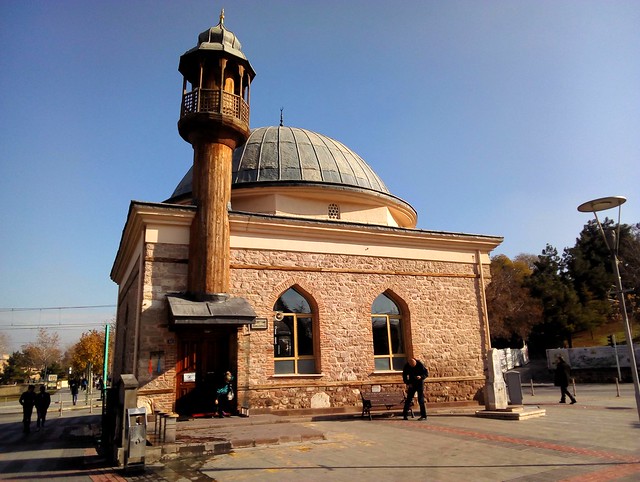 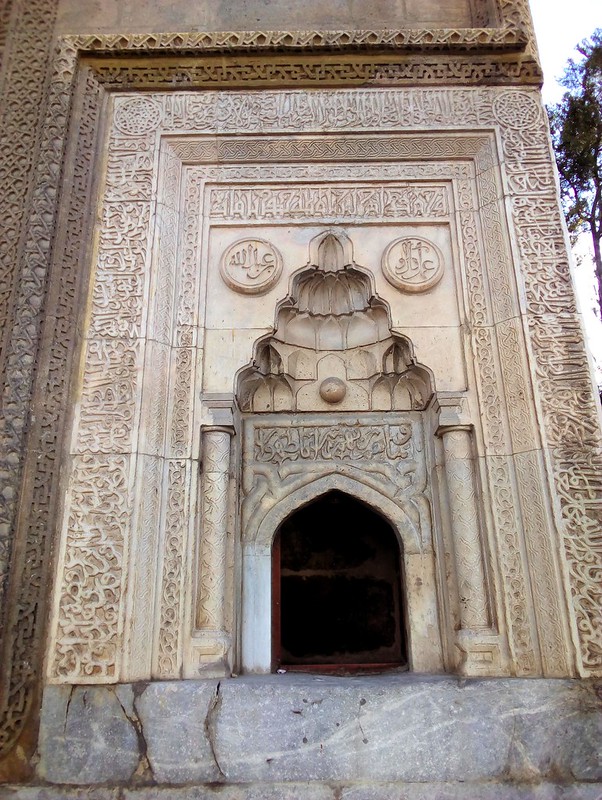 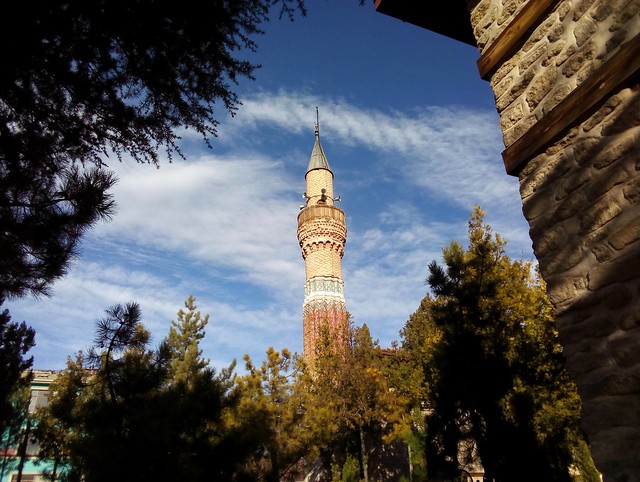 This mosque, Selimiye Camii, looks Ottoman to me: 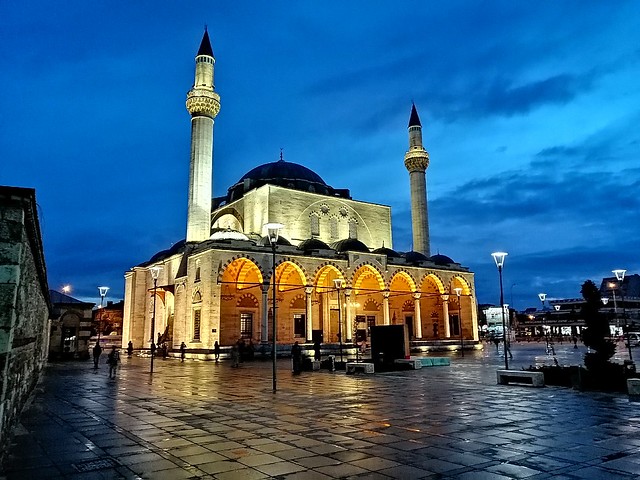 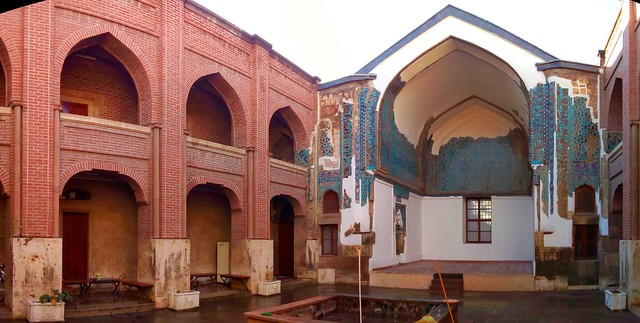 However, the best tile work is preserved in another 13th century seminary, Karatay Medresesi, now the Çini Eserler Müzesi (Tile Museum).  Check it out: 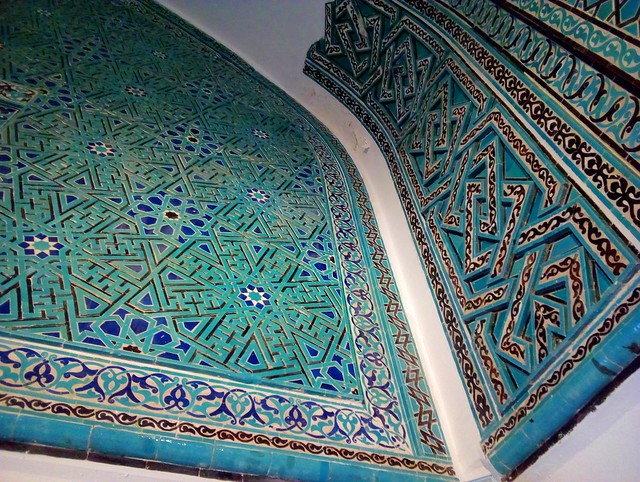 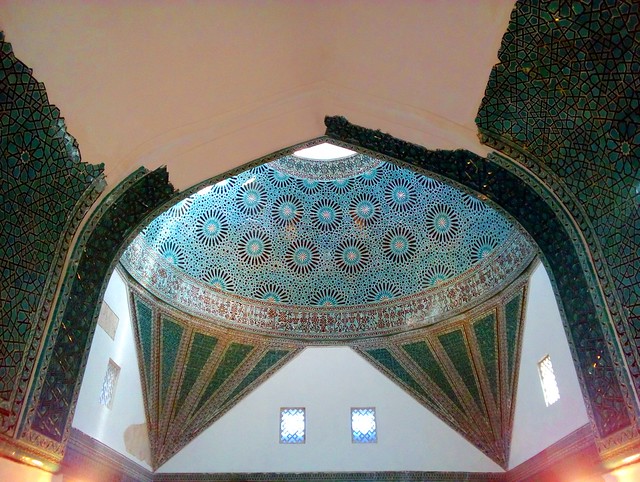 The tiled mihrab in the Alaeddin Mosque is supposed to be very nice as well, but the mosque was crowded for Friday noon prayers when we went by, and we never made it back.

Konya’s archaeological museum houses its small collection in, to put it nicely, an unassuming building.  The collection, however, is impressive.  Here is yet another Roman Hercules sarcophagus (there are three in the Antalya Müzesi): 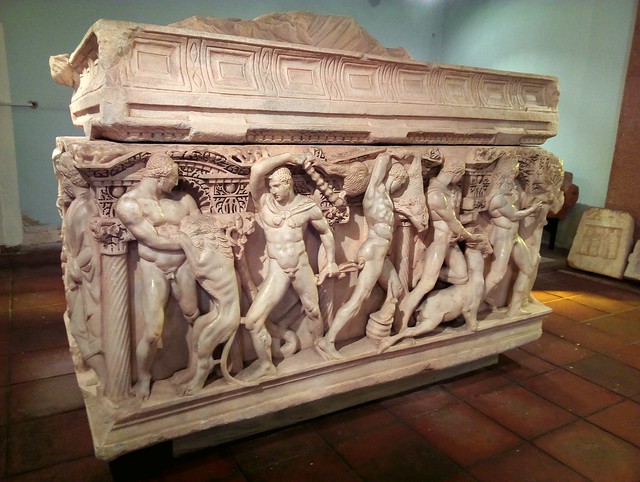 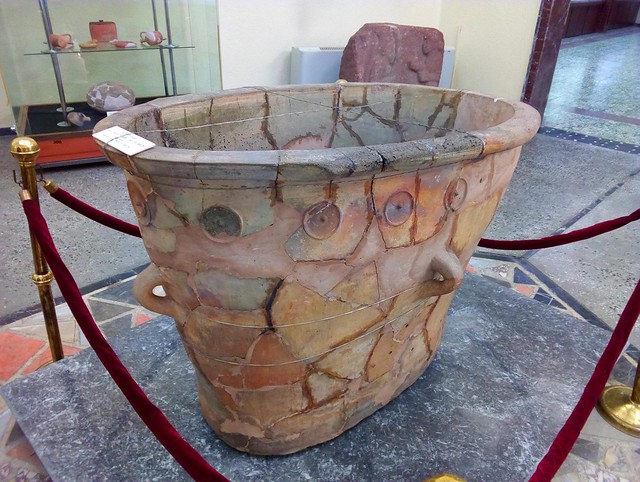 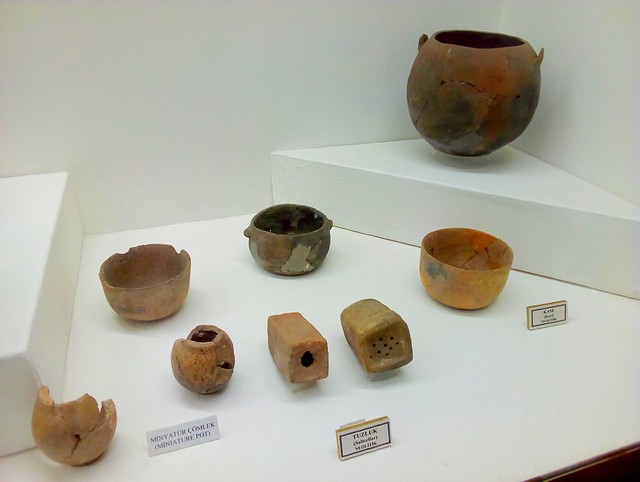 Arriving in Konya at the bus station, Ferda and I took a dolmuş into the center and easily found a hotel without a reservation.  There are lots of accommodation choices in the fun to explore pedestrian streets ~400m west of the Mevlana Müzesi. 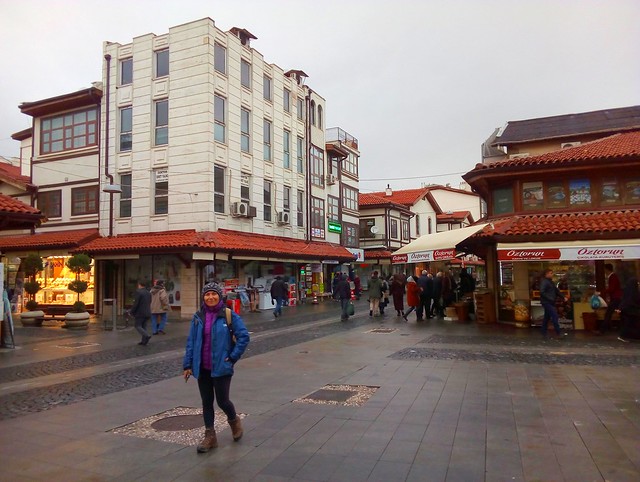 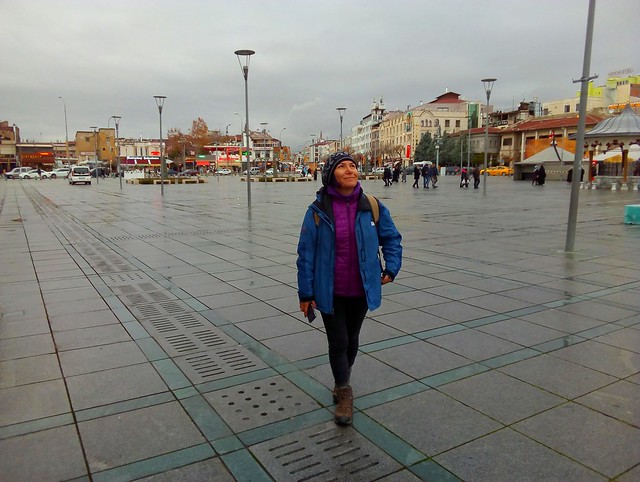 You probably should, however, buy tickets in advance for the sema.  That’s the whirling dervish performance that I’m sure you’re anxiously awaiting!

We walked to the performance in the evening passing the nicely lit İstiklâl Harbi Şehitliği, a memorial to those killed in the nasty fighting at Çanakkale (Gallipoli) during World War 1. 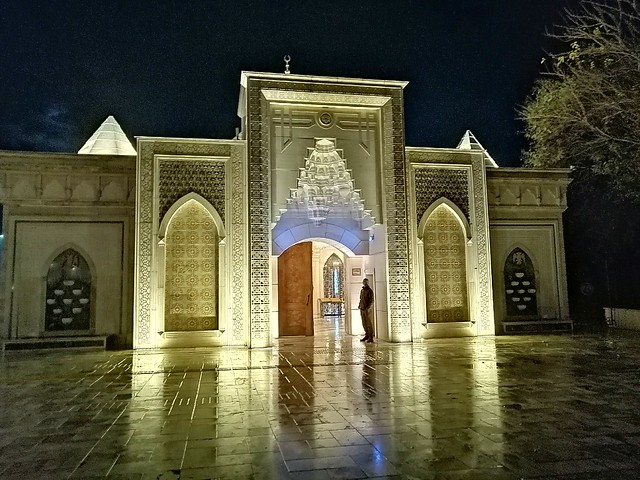 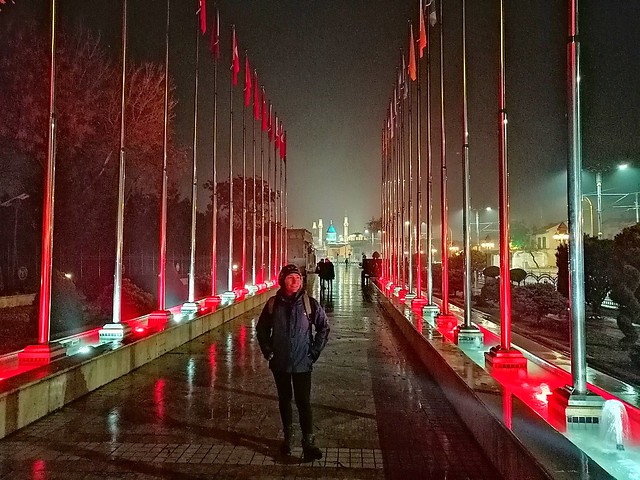 And finally the dervishes! 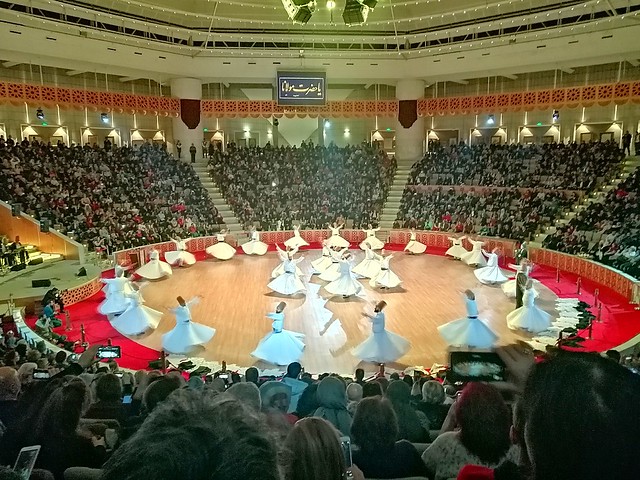 From my notes the sema “was a beautiful, calming, mesmerizing experience,”  well worth a visit to Konya in its own right. 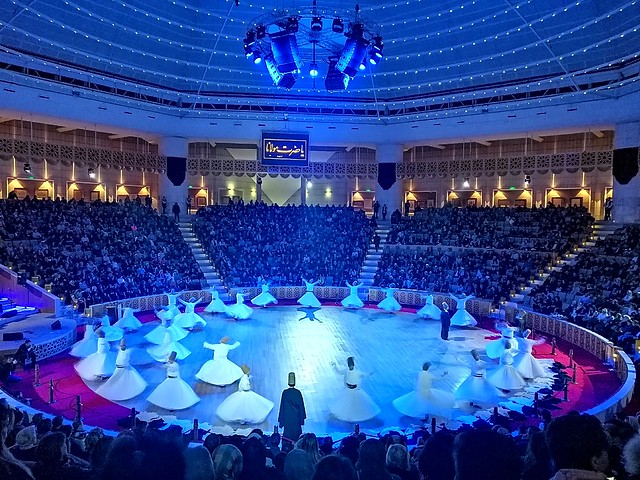 Sorry for all the long, weird names and long, convoluted sentences in this post.

This entry was posted in Traveling, Turkey and tagged Konya. Bookmark the permalink.

1 Response to Konya and the whirling dervishes