I had been to Dedegöl once before, with Özgür in the winter.  We went in from the north side, from Melik Yaylası.  I had heard people talking about the camping and climbing area on the west side of the mountain, Kuzukulağı Yaylası, but I had never been here before.

Uh, wow, it’s amazingly beautiful.  I crossed the Köprü Çayı at Yanık and after an approximately 630m climb, the road topped out, and I came to this view: 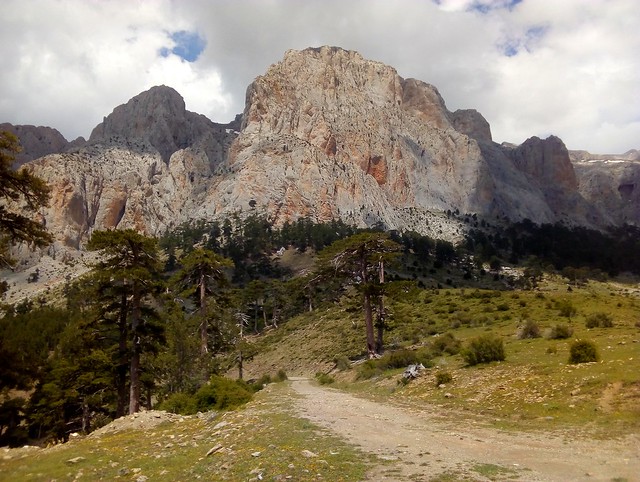 The road I took got steep after Eldere, and I had to push the bicycle for about half an hour.  I learned later that the easier way is to take the right turn about 4km passed Yanık (on the road to Eldere).  There’s a good road to the left, but you want the smaller road to the right.  You have to cross the creek (no bridge).  The road is poor for the first ~500m and leads straight to the yayla.  It’s the route that most cars use.

Taking that route you’ll miss this section of road: 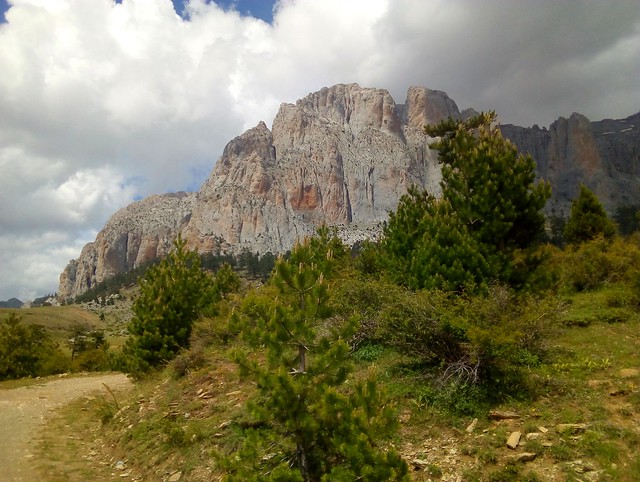 Instead you’ll arrive directly at the yayla:

It was cold, windy, and rainy when I first arrived, but there’s a covered picnic area where I cooked dinner that night.  The next day looked like this: 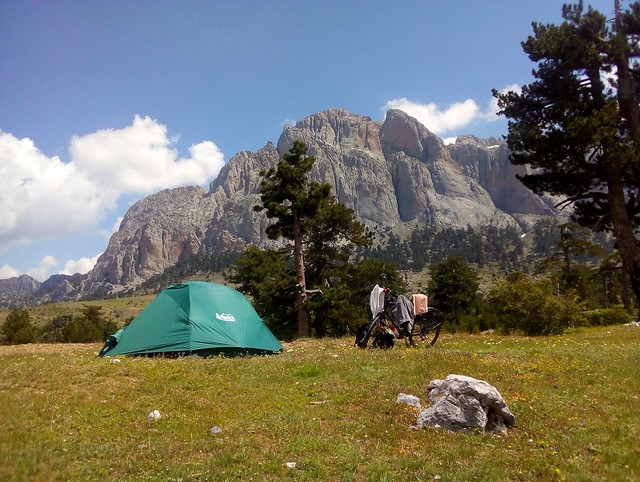 It was warm enough that morning to bathe and wash my hair using the plentiful water at the camping area.  I enjoyed a rest day by myself.  Ferda, Seb, and Çiğdem showed up by car in the evening.  They brought dinner, and we had a great campfire.  I ended up spending five nights at this camp, and there were only two nights when a campfire was possible.  It was too windy the other nights.  Indeed the only complaint I have about this area is that it was so windy most of the time I was there.  Is that normal?  Or was I just (un)lucky?

Seb was excited to go climbing the next day.  We headed to the large apron just to the left of the orange-colored thick pinnacle on the right side in this photo: 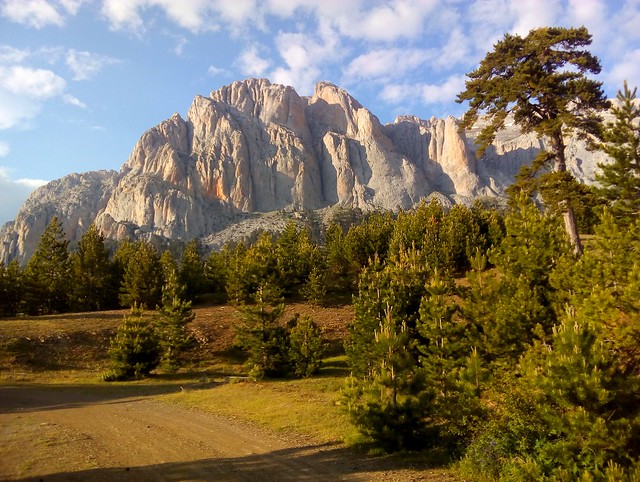 Here’s what that apron looks like when you get closer: 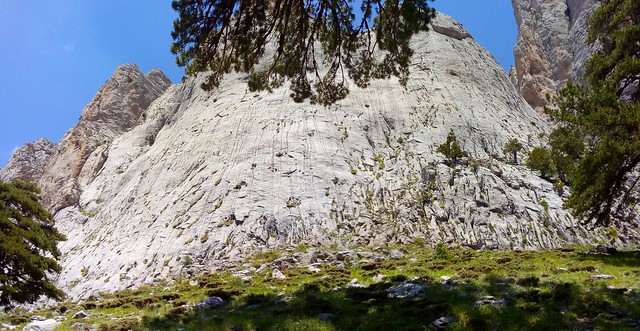 There’s both sport and trad climbing here.  I hadn’t been climbing in months so the routes felt quite hard when we first started.  It would be great to come back and spend more time, but Seb had to rush back to work.  We ended up climbing two short days. 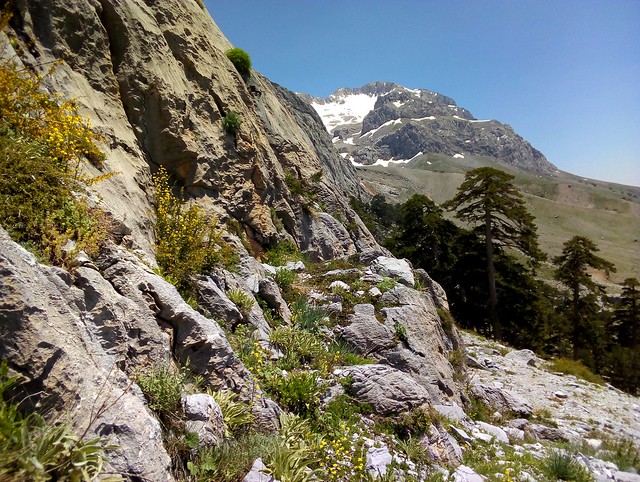 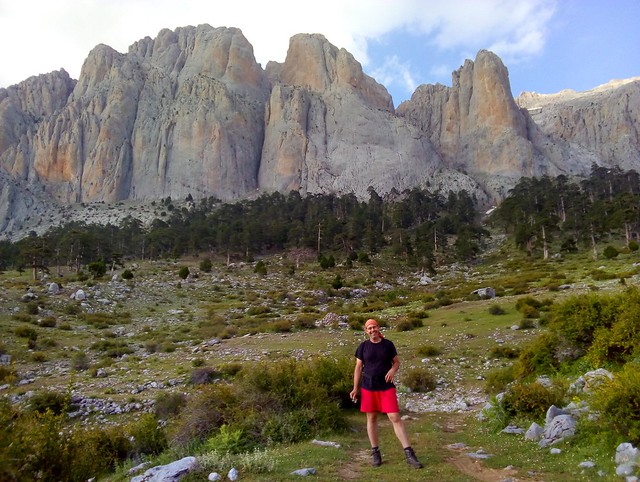 Philip, Dilan, Ersin, and Mustafa showed up the next day and spent two nights camping.  Somehow I don’t have any photos of the group.  We had fun chatting, eating, and drinking.  They all packed up and left Sunday morning, leaving Ferda and me and our bicycles.  Some kids came up from the village (Eldere) to collect snow and taught Ferda how to braid flowers to make the hairpiece that Zeynep’s wearing in this photo. 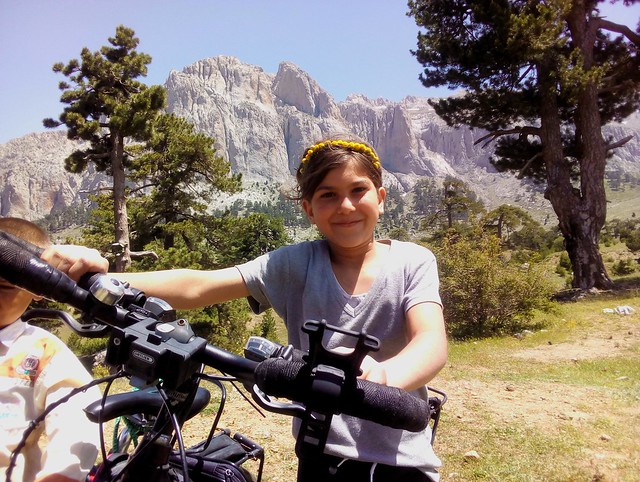 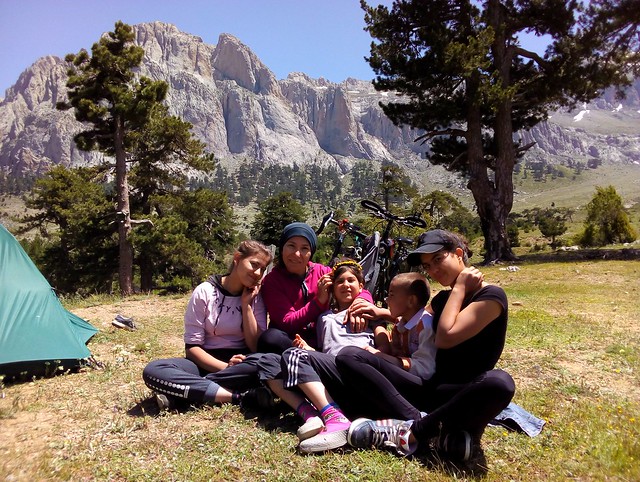 In the afternoon Ferda and I walked around a little hill to the west of camp and came up to a small pass which offered this view:

We left on our bikes the next morning. 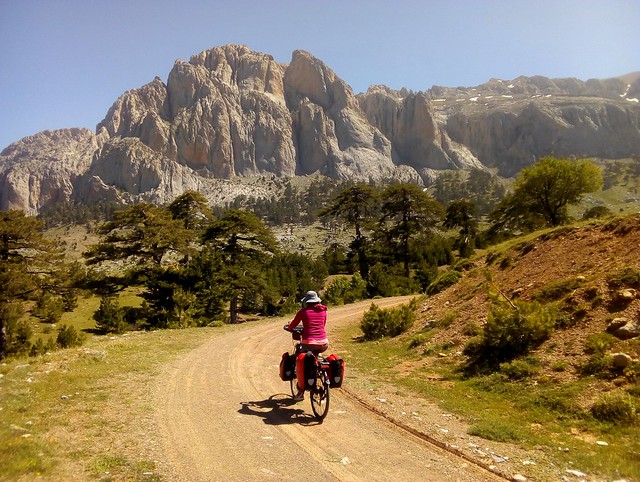 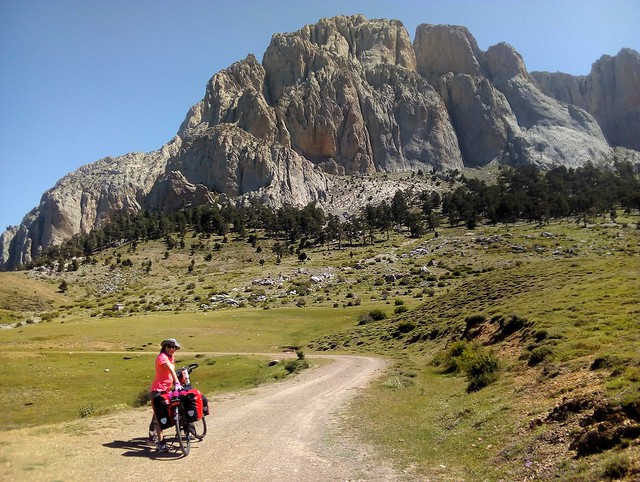 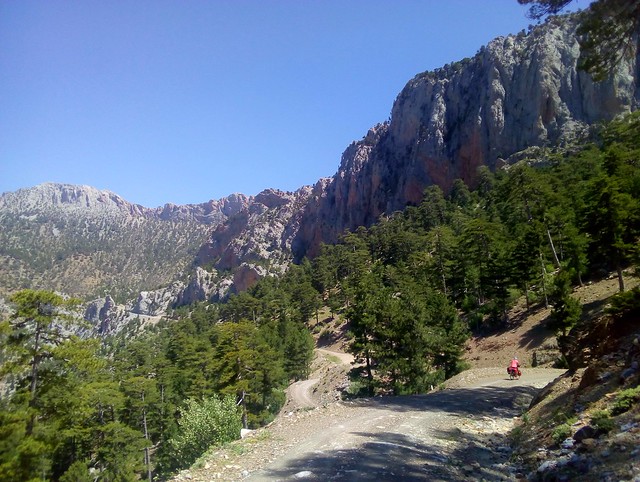 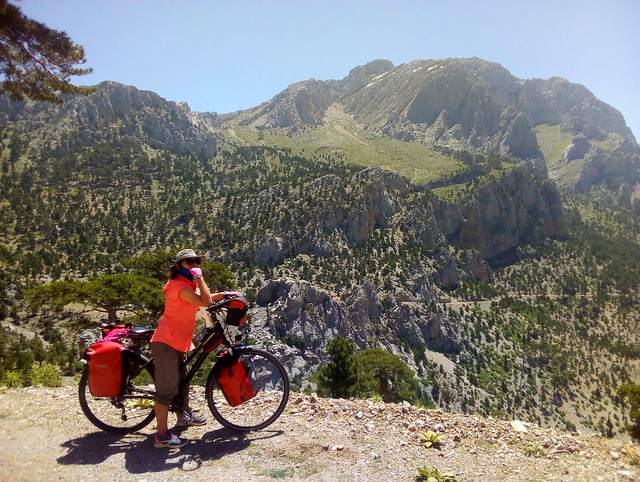 My route had been to head north a few kms and then take the road down to the river at Karacahisar.  However, at that intersection another road continued north, staying high.  Ferda checked out the satellite photo (we had internet access here) and said we could continue, that this road would connect to our intended route farther north. 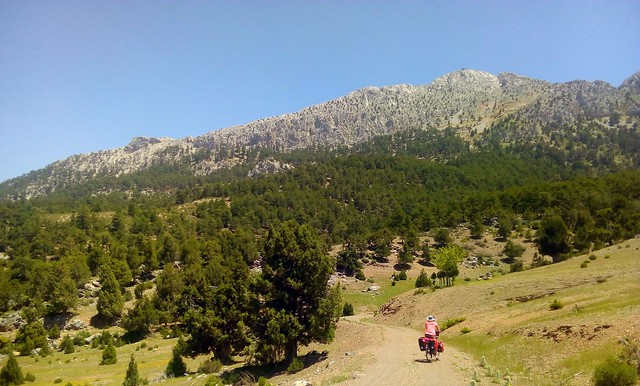 Hahaha!  I’m not sure what she saw.  The road deteriorated, ending in a meadow.  Amazingly just 200m ahead was another road!  I suppose I probably could have got my bicycle through there by myself, but it was definitely easier with two people.  An hour later (less?) we were pedaling again.  This new road wasn’t on the map, but it was quite good so it must go somewhere, right? 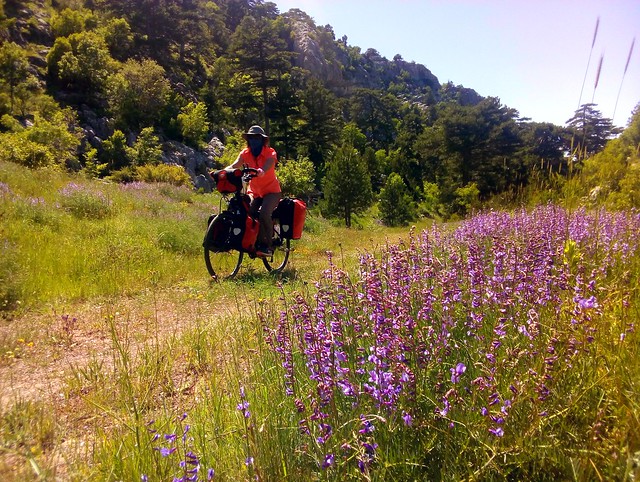 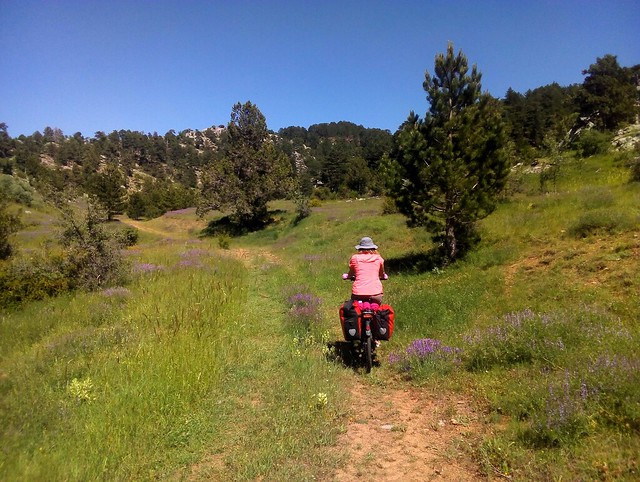 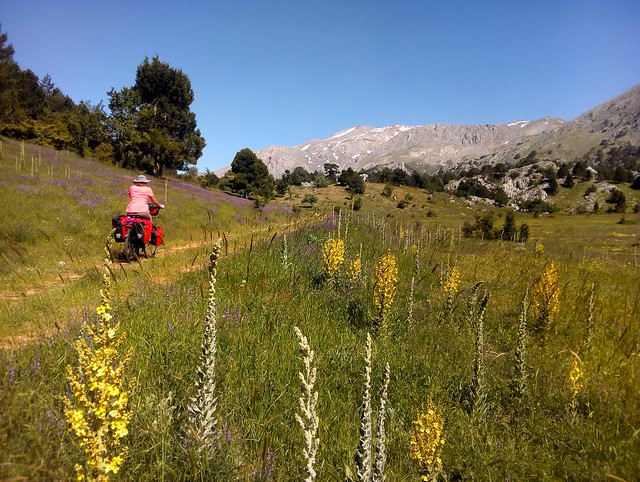 Hahaha!  That road got so bad that at one point we had to walk ahead to find the road and see if we really could keep going.  We pushed on (literally) and came to this yayla: 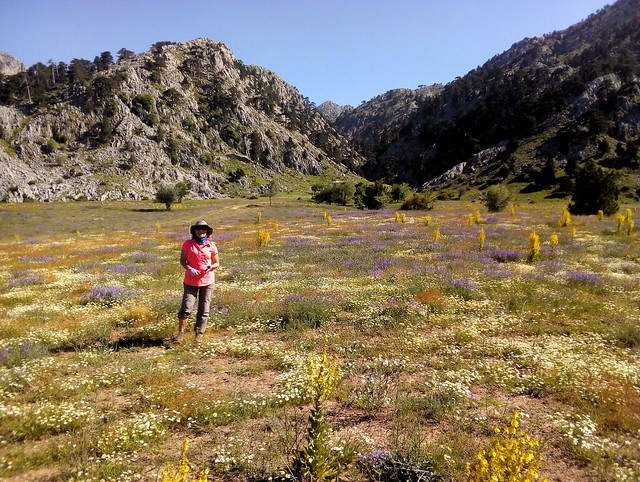 Wow, looks like a place to spend the night.  There was even water (again) and a covered picnic table (again). 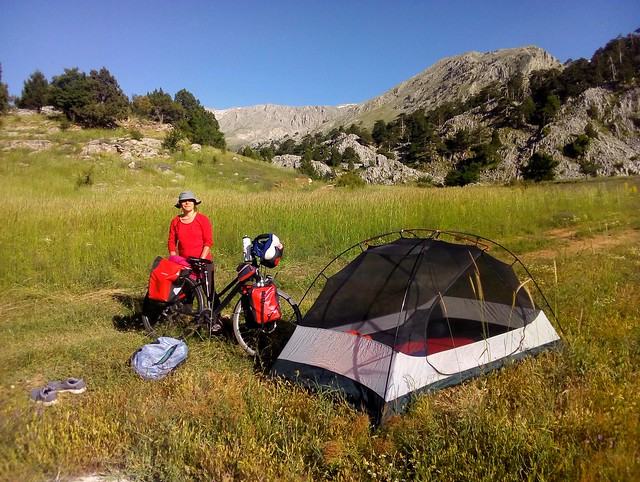 We said goodbye to our private yayla in the morning 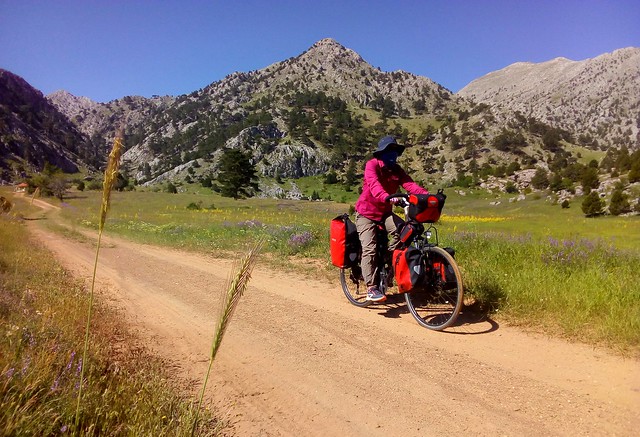 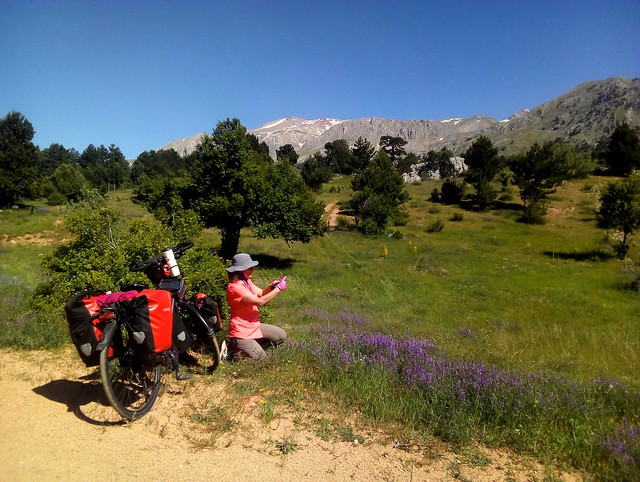 and had a steep downhill to Yaka Canyon.  Here it is from the top: 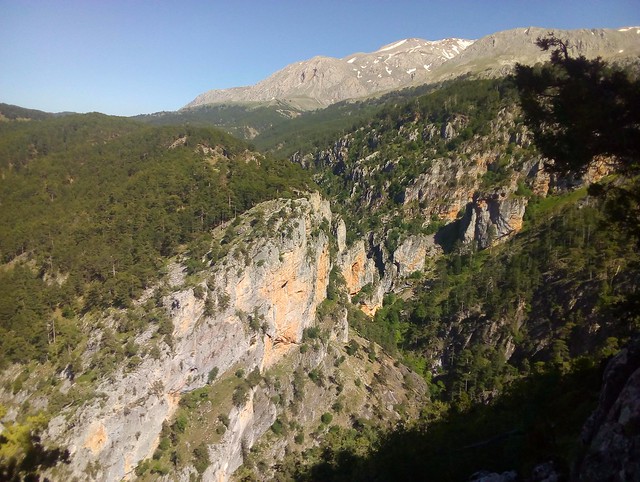 and here we are taking a short walk in the canyon itself: 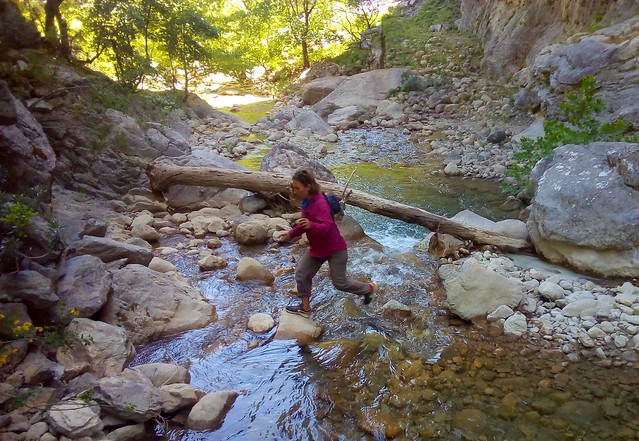 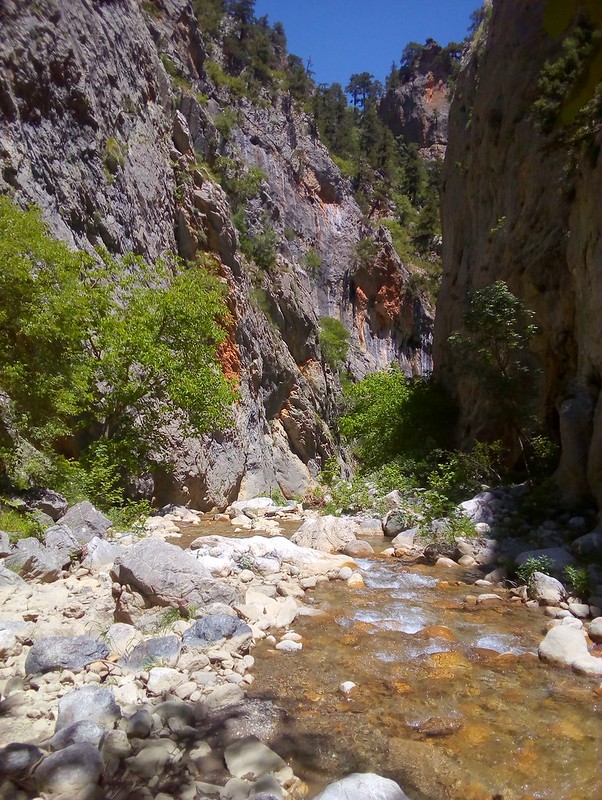 Friendly locals treated us to tea and lunch 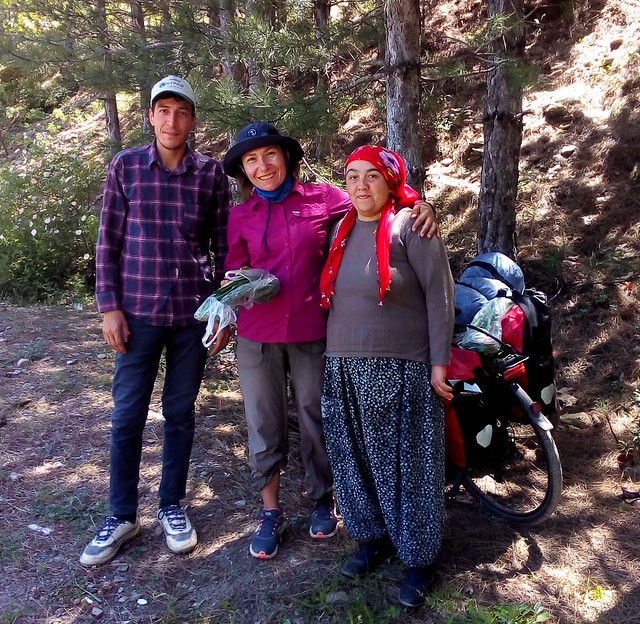 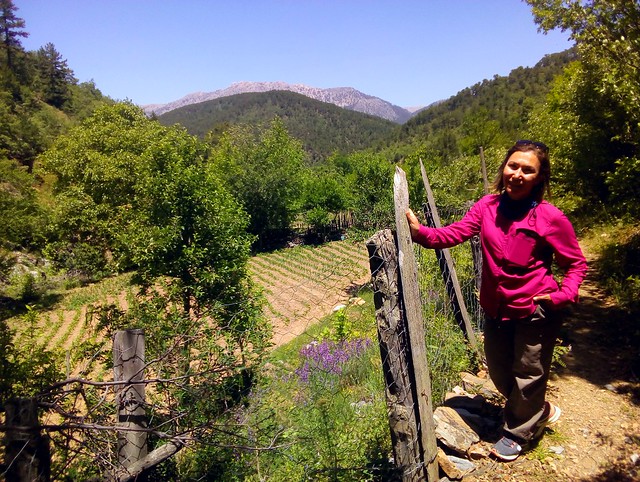 before we started the ~400m climb up to Melik Yaylası. 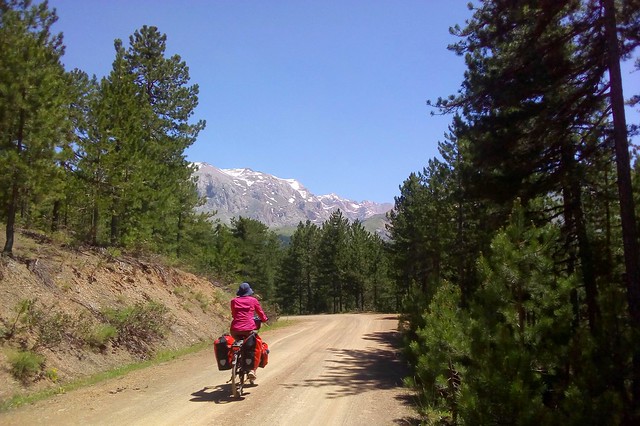 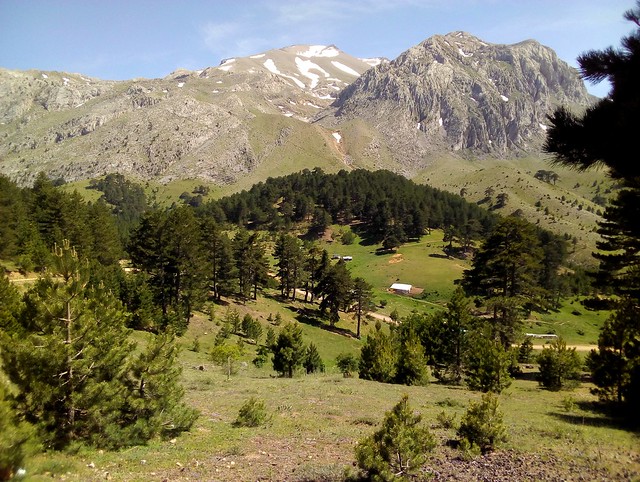 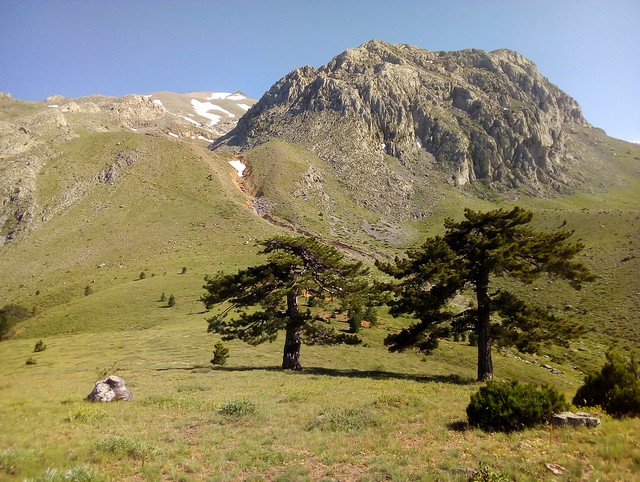 The beautiful mountains have come to an end, but we’re still on the road. 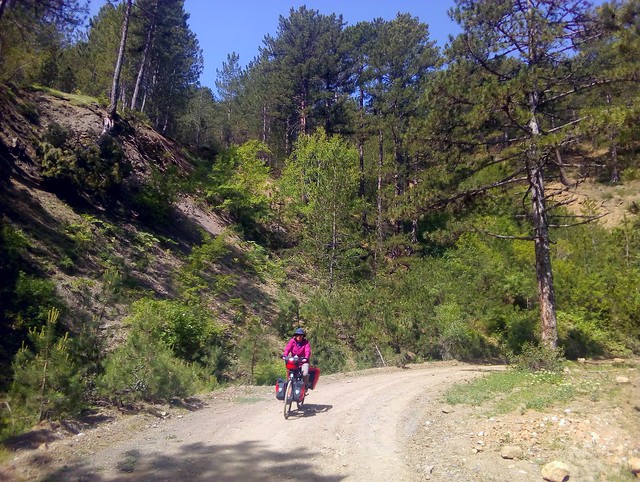