I entered Greece on a cold and rainy day.  I hadn’t even had a sip of my hot tea in a warm, dry café when Tasos said, “tea’s not enough for this cold, you need tsipurou!”  And so I was introduced to the local distilled beverage.  He also invited me to spend the night at the monastery in his village (Ragio?) which I gladly accepted.  In the end that didn’t work out, but I spent the rest of the day (and that night) with Tasos’ brother and sister, Chris (Χρίστος?) and Vasiliki, and enjoyed the warm fire, the warm food, and the warm hospitality.  Communication was easy since Chris and Vasiliki had spent many years living in Toronto.

A couple days later camped on the beach near Paleros, I had ice on my tent for the first time on the coast.  As I was packing up, a man with bushy gray hair, a gray beard, and a Harley Davidson leather jacket rolled up on his motorcycle.  He would fit right in at the Mill Site Inn in Ward.  We exchanged a few words about traveling on two wheels.

From the beach campsite I headed to the bakery in town where a customer who spoke some English helped me communicate with the baker — nothing crucial but I had to make sure the bread was fresh that day.  Ok, maybe a little crucial.  After enjoying my tiropita (cheese pastry — kind of like burek), I walked my bike to the center of town in search of some fruit.  Sitting together outside at the local café were the man from the beach and the man from the bakery, father and son-in-law.  They invited me to join them for coffee.  On hearing that I was headed to Turkey to ride with my buddy, Kurt, in February, the son-in-law said something about snow and cold and offered me his business card.  He runs the local funeral home.

On sunny days the temperature for riding on the coast in Greece in the winter is actually quite nice.  The sea is crystal clear aqua blue, and I get views of snow-covered mountains around every corner it seems.  It’s too cold for swimming though some hardy souls — old men only — were braving the water in Patra.

The problem is that not every day is sunny.  The other problem is that it sure would be nice to explore some of these mountains.  I’ve done a little but stayed down low.  On a dirt road climb out of Ag. Nikolaos I came across a rare herd of sheep — rare only in that there was no dog or person to tell the sheep where to go.  And you can guess what the proverbial sheep do when they find a cycle-tourist… they started following me: 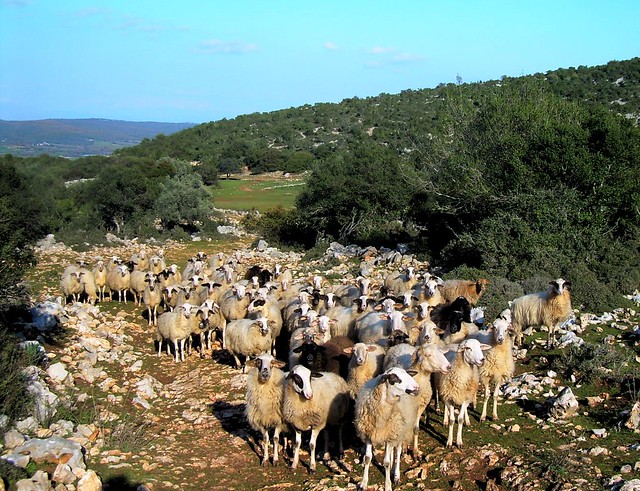 Go away, go away!  Funny.  And check this out.  One night near Preveza I camped in a castle, a first for me. 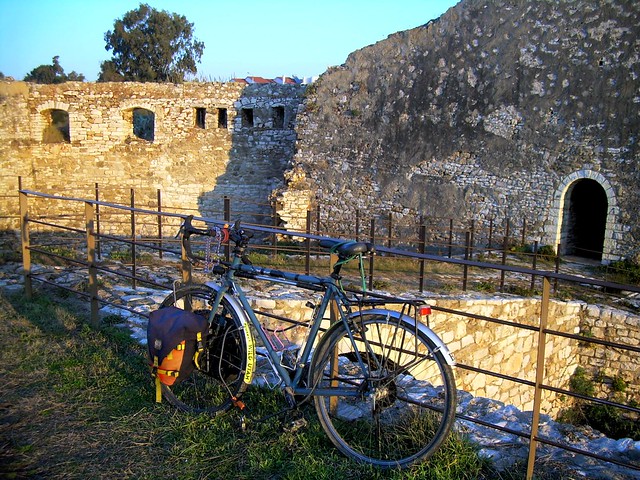 Eight days after the tearful goodbye in Sarandë as I was locking my bicycle to join a Frenchman at a café in Astakos, Snežana rolled up.  Neither of us expected to see each other again.  It was dusk, and she had pedaled quickly to make it into the cute fishing village before dark (she came from the west; I had come from the north).  I abandoned the French tourist and our discussion about la peine de mort to join Sneki at a nearby beach-side campsite.

Stubborn and independent as we both are, we split up again a day or two later only to unexpectedly meet again in Antirrio.  Together we crossed the bridge to Peloponnese.  Together we celebrated New Year in Patra.  Together we’re still riding… 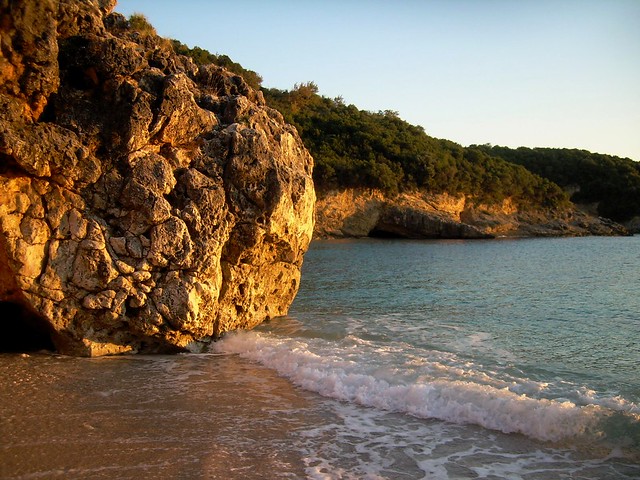 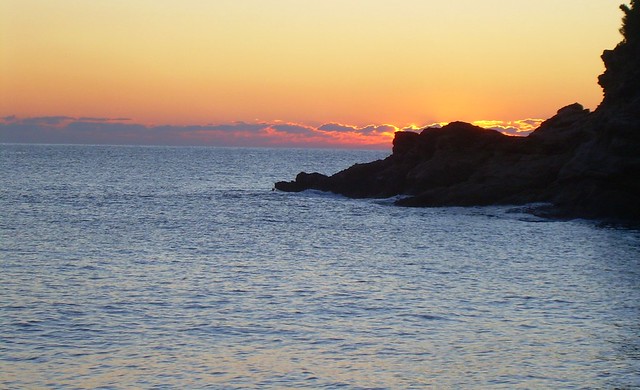 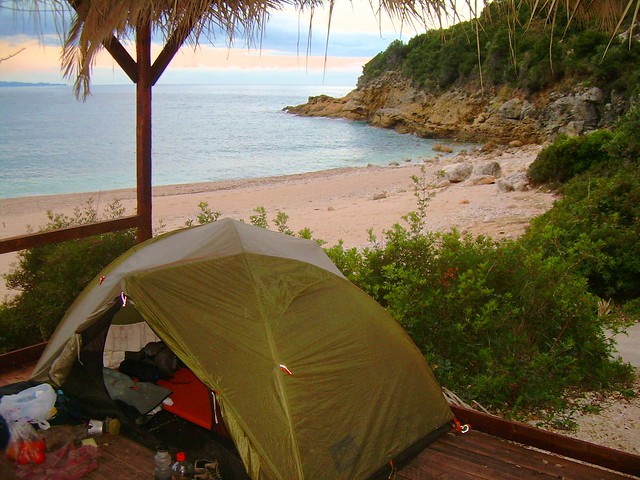 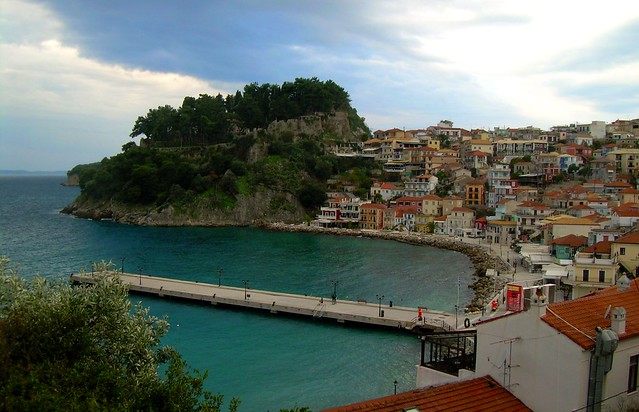 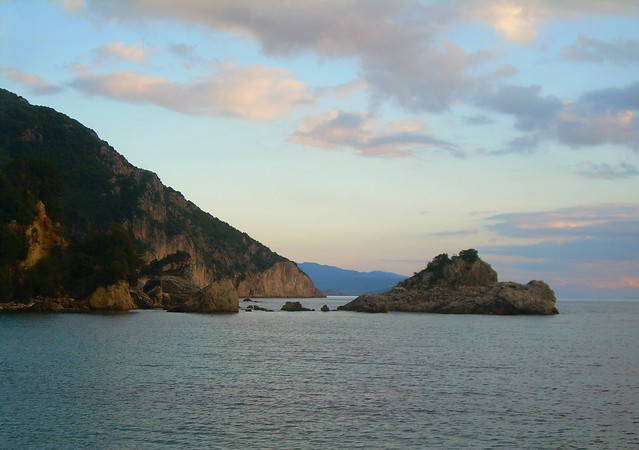 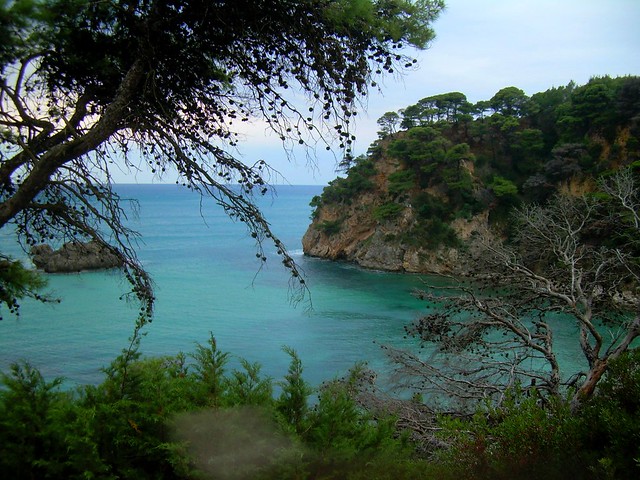 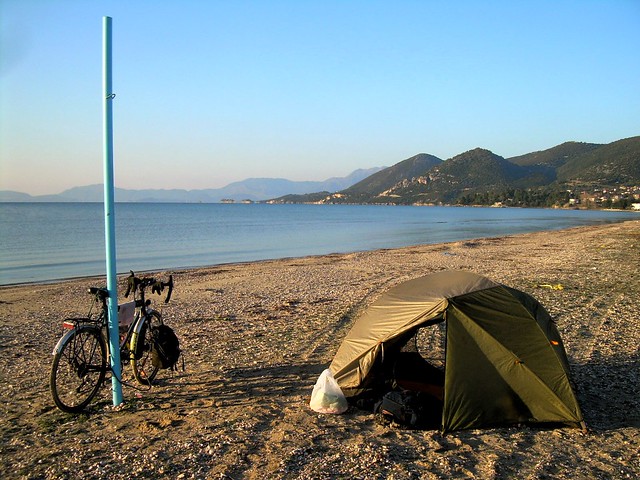 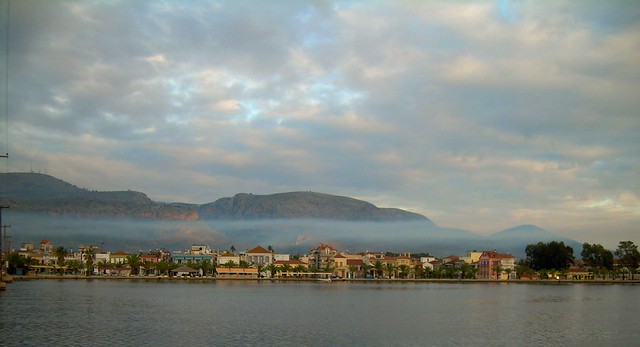 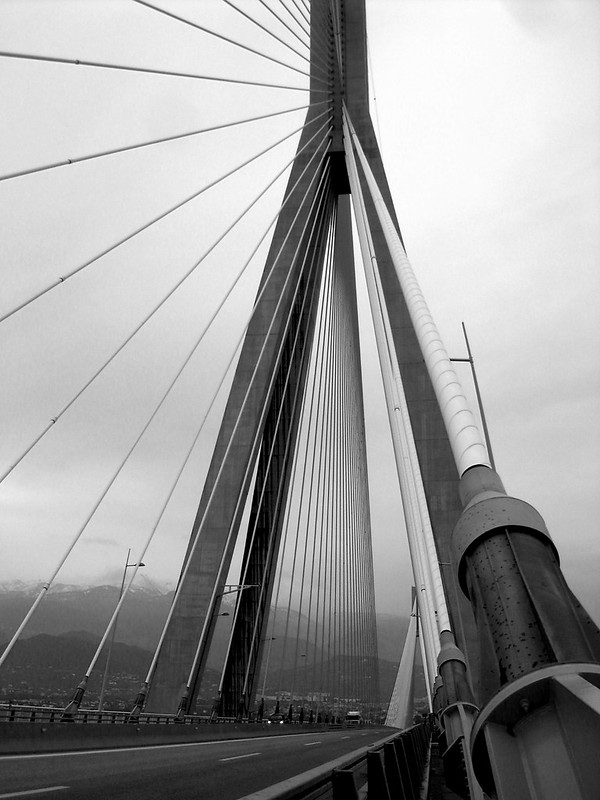 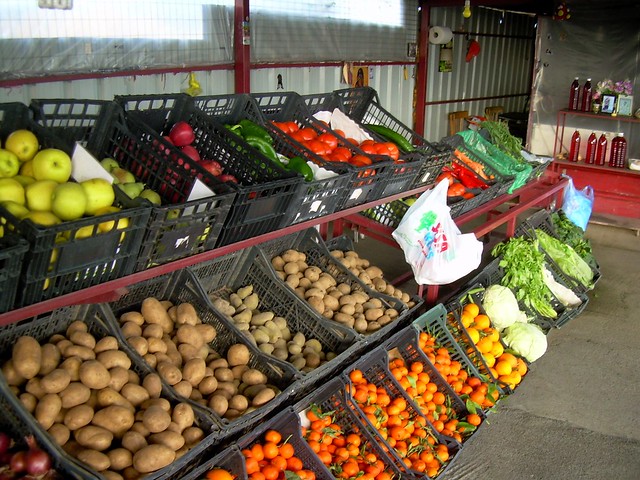 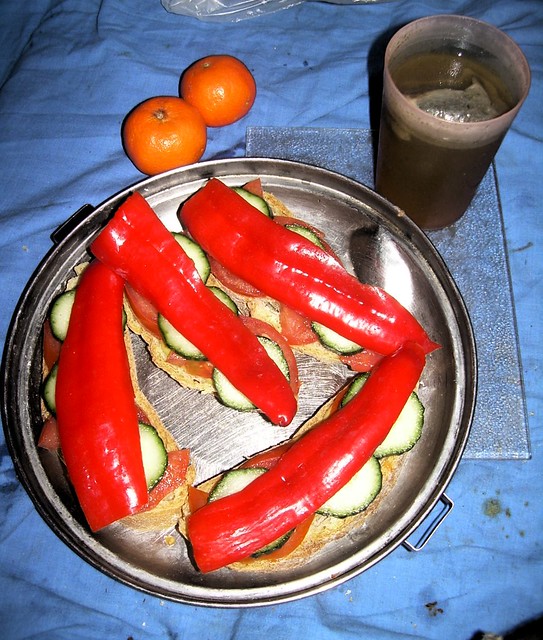 3 Responses to A cycling companion?