Recharging the batteries in Athens

Even though the riding pace for the last couple months has been quite slow, I kept thinking it would be nice to take a real rest somewhere.  The short days and cold were taking a bit of a toll, but I also needed to get my mental energy and excitement back.  Because of the high prices in Greece,  I was leaning toward Turkey for such a rest.  Athens turned out to be the spot.  It started with Uglješa who offered to host us for a few days via a Serbian cycling forum. 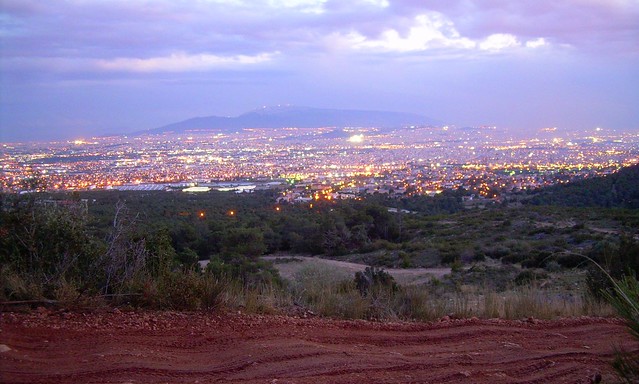 On our first night in Athens, Uglješa became an uncle for the first time.  He organized a late, impromptu celebration, and we met a number of other ex-pats, all from the Balkans — mostly Serbia, also Macedonia and Bulgaria.  Snežana and I were both tired this night, but we rallied enough to chat with (another) Snežana and Vid who had been following our trip via Snežana’s blog!

Uglješa took off to Belgrade for a few days to visit his sister and nephew and left the two vagabonds to rule over his flat.  By the time he returned we had moved a few blocks away to Snežana and Vid’s place while they took a 10-day trip to Belgrade.  They’re moving back to Belgrade in a couple months and are starting to organize housing and jobs there.  That’s how we ended up with such a great opportunity to recharge our batteries in Athens.  Thanks, Serbs. 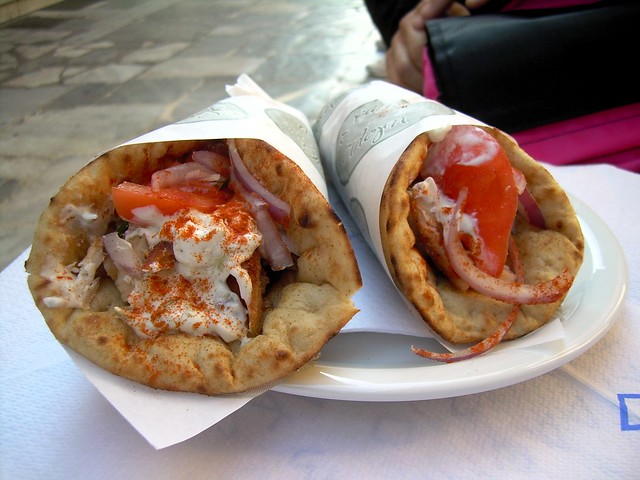 Snežana and I cooked, read, slept, ate, wrote, napped, and even made it into the city center a couple times to see the obligatory Athens tourist sites.  I was a bit at a loss for words when I was interviewed by a model for a Japanese TV show about my feelings when I first saw the Parthenon.  Uh, well, I wasn’t overwhelmed (by the building).  Sumimasen. 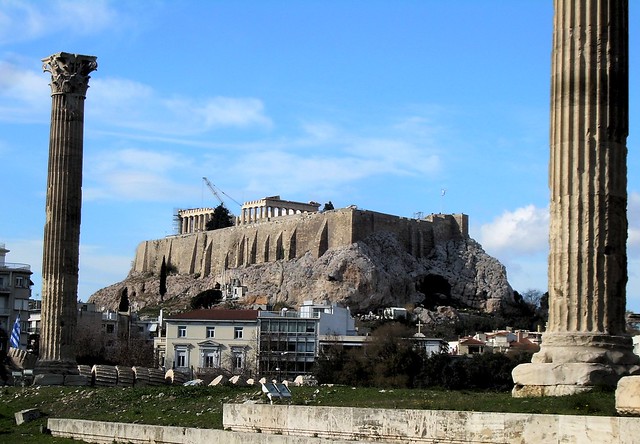 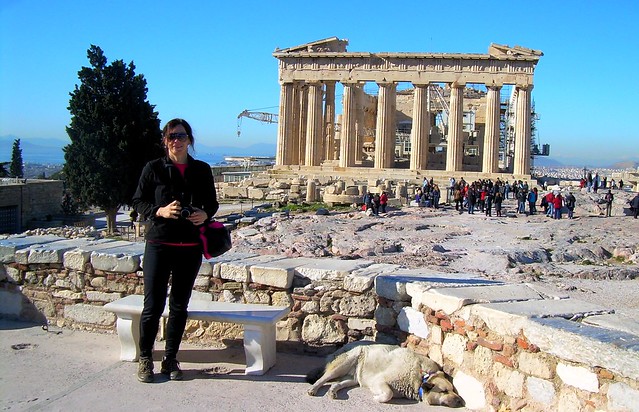 Ancient Agora, NE of the Acropolis, was the site of my favorite building in Athens, Hephaisteion.  It was nice to visit this area on a Sunday (in winter) when entrance is free.  Greeks were out with their families; some people were having picnics.  I wonder how Athenians feel that so many pleasant, quiet, park-like areas are closed to access (pricey entrance fees) for much of the year.  The cordoned-off ancient sites are a great central refuge from the giant urban conglomeration that is Athens. 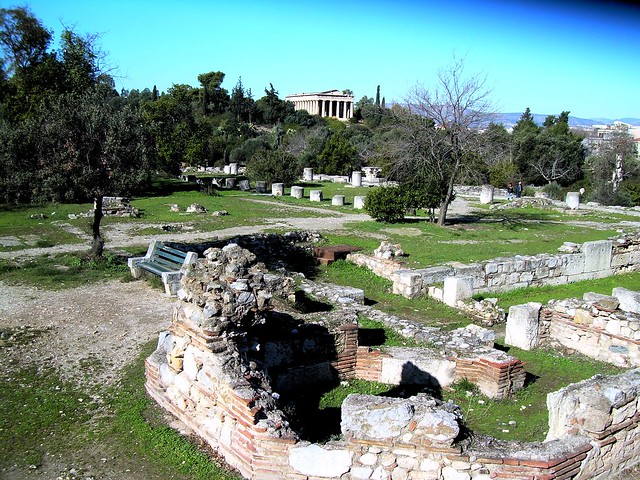 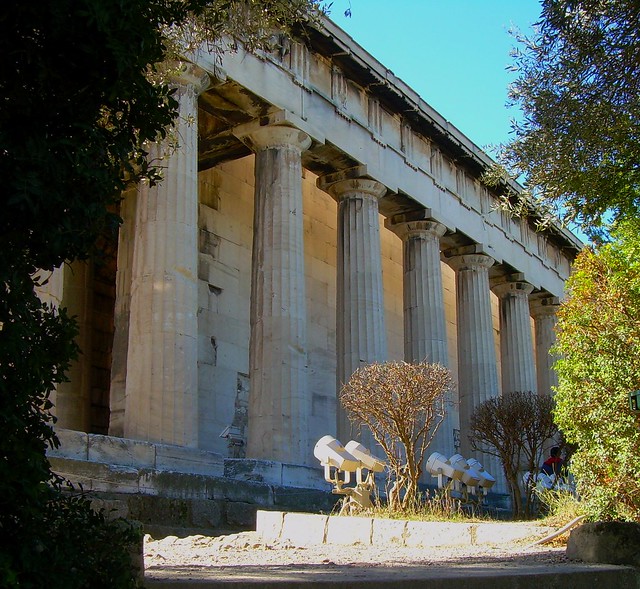 Ok, the Temple of Olympian Zeus was breathtaking too.  My brief conversation there with an Australian couple who started their travels the same week that Snežana and I did reminded me of another reason why bicycle travel is so great.  They traveled from Croatia to Greece in 48 hours, stopping for the night only in Durrës, because of car insurance difficulties in Montenegro and Albania.  Yikes, they missed some good stuff.  As a matter of fact, I’ve had more compliments for my Montenegro photos than any others. 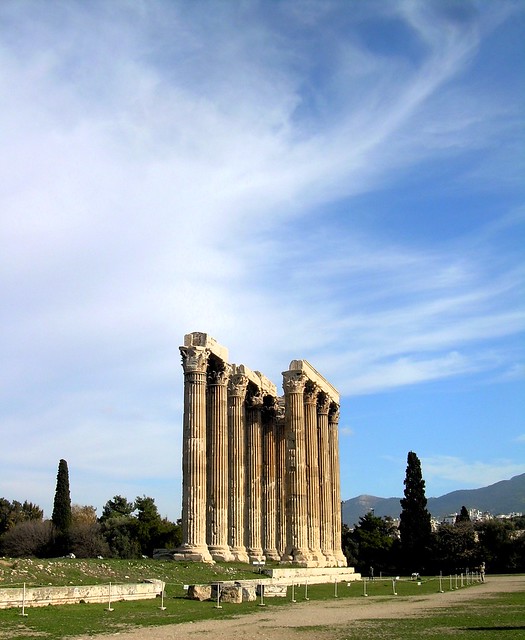 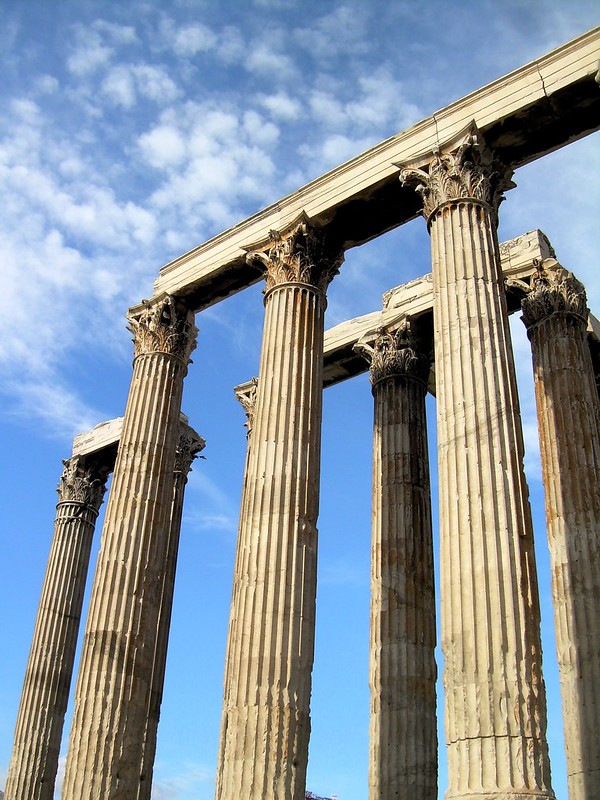 Surrounded by so much history, my favorite excursion in Athens was on my first full day in the city.  Uglješa took me on a bike ride in Parnitha National Park.  Nature trumps archaeology.  After a few kilometers, snow thwarted Plan A, a dirt road climbing up to the south.  We ended up doing most of the climb on a paved road.  I set the pace, and since Uglješa stuck with me, I didn’t slow down nor realize at the time that he was working to keep up! 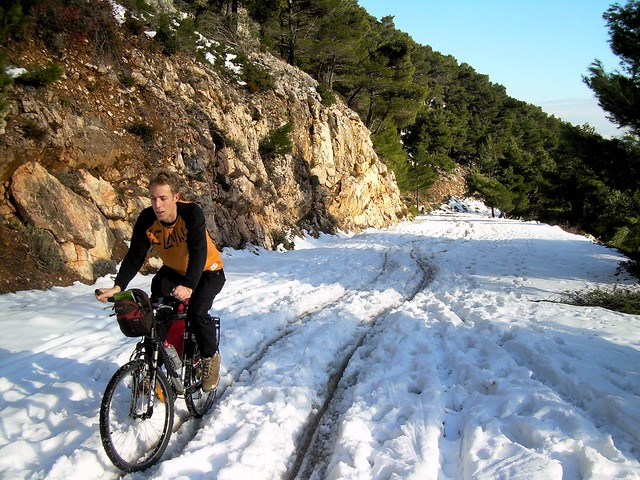 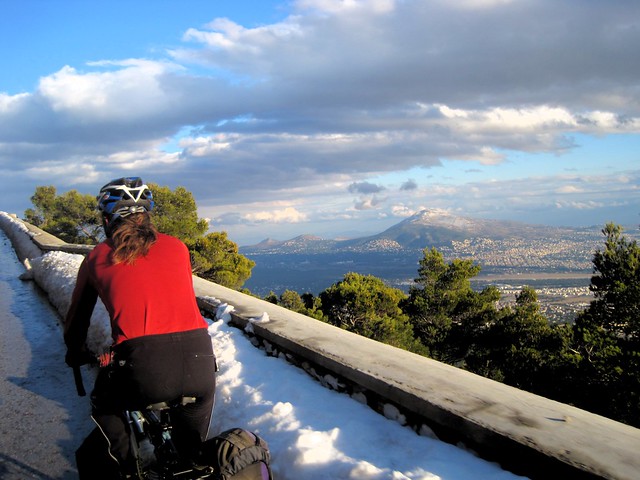 However, being a little tired or cold doesn’t deter a Serb.  This excursion with Uglješa reminded me of why I had so much fun in Serbia.  At the top of the road it was cold and windy, and the sun was setting.  Uglješa suggested we continue on foot to the summit to get a great view of the city.  Posthole up another couple hundred meters so it will be late enough that all that water on the road will be frozen for our descent?  Sure!  I may not have waterproof shoes, but I have a helmet. 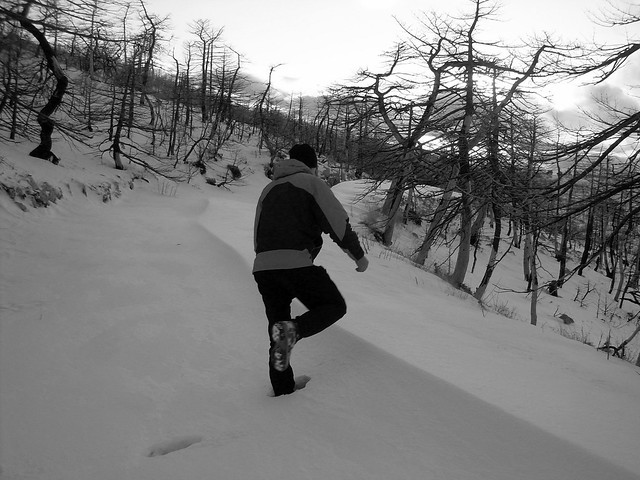 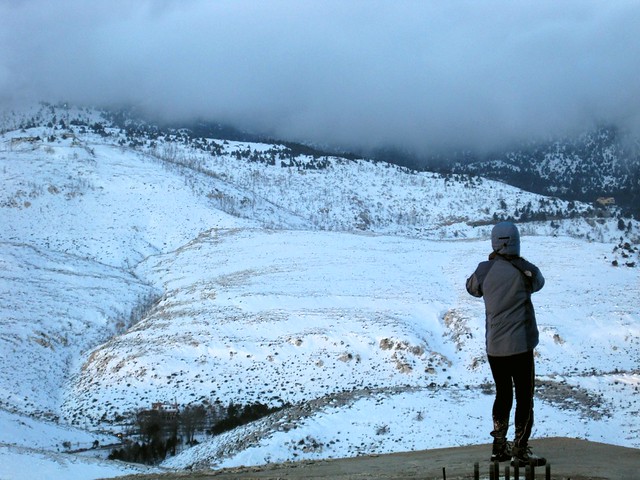 Fricking Serbs!  It was great. 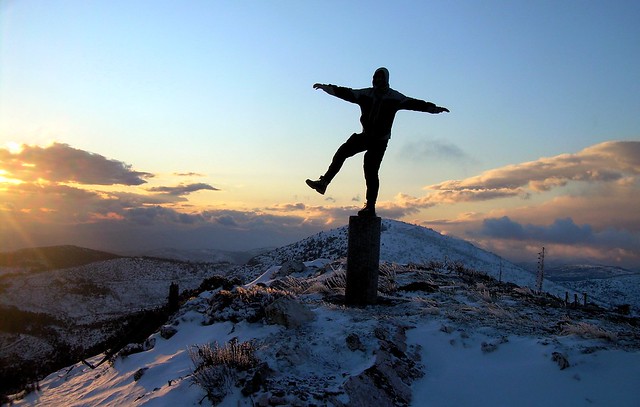 2 Responses to Recharging the batteries in Athens