Even before my bicycle was stolen, I had decided to stop in Antalya for a few weeks to study Turkish.  I didn’t expect to like the city,  but I knew that lots of tourists come to Antalya so there would be a good choice of language schools.  I’ve been here eight weeks.  I really do like it. 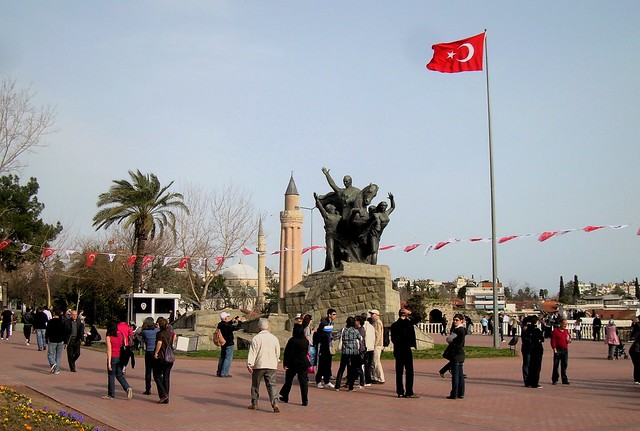 The city of Antalya itself is not particularly exciting.  There’s certainly no urban buzz like in Denver or Belgrade.  I guess there’s night life.  I mean, there must be, right?  But I haven’t seen it.

I feel comfortable here.  It’s a laid-back city.  Folks generally don’t hurry.  People come from all over the country and indeed the world to live and work here.  Palm trees and mountains, sea and sunshine.  It reminds me of southern California where I grew up.

The setting is dramatic.  The mountains aren’t as close to the city center as in say, Rio de Janeiro or Hong Kong, but they’re spectacular.  In a previous post I mentioned the Tünektepe bike ride.  The climb starts about 7 km west of the city center and climbs quickly to 600m.  Looking at the mountains from the city center that summit is dwarfed by everything around it.  There’s a 1600m summit about 6 km from the coast, and the mountains beyond rise to 3000m!  It’s incredible. 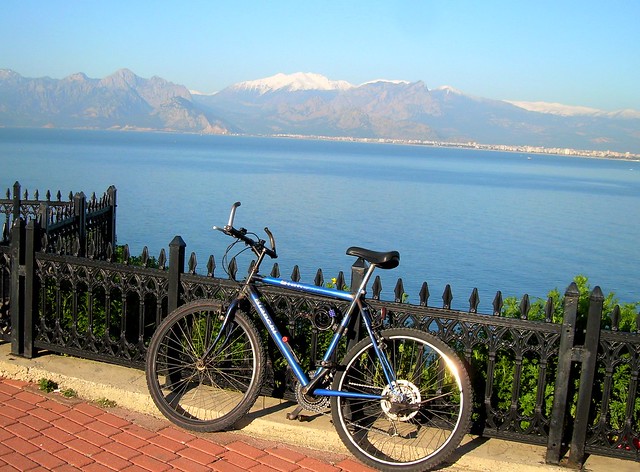 As I spend my days studying and riding around the city (still on a borrowed bicycle), I look at the mountains and dream about the mountaineering opportunities.  The snow and ice climbing season ends earlier here than in Colorado.  A lot of snow melted in April.

I wanted to retake this photo with a clean lens, but there’s not nearly so much snow now. 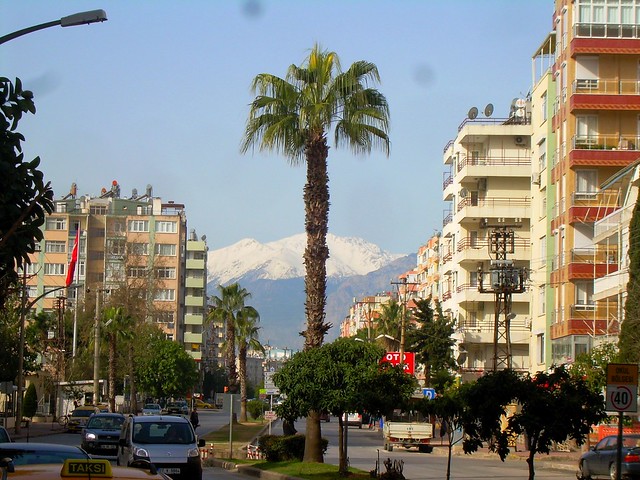 So far I’ve kept myself content with dreaming about the mountaineering.  I’ve done a little hiking and climbing, but mostly I’ve been unusually urban and sloth-like for the last two months.  Turkish language has consumed most of my waking hours, and I’m enjoying exercising my brain instead of my muscles for a while.

To get around the city I cycle, but to explore the city’s jewel you don’t need a bike at all.  The medieval part of the city is called Kaleiçi, literally in the fortress.  Sections of the fortress walls still exist, and the dramatic cliffs that protected the city from attack from the sea are still there of course.  The best part, however, are the narrow, sometimes twisting, sometimes cobbled, streets.  Even after two months I’m still finding streets that I haven’t walked down before. 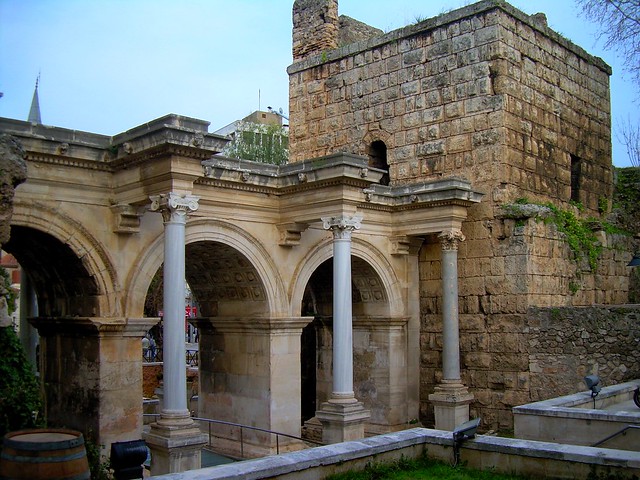 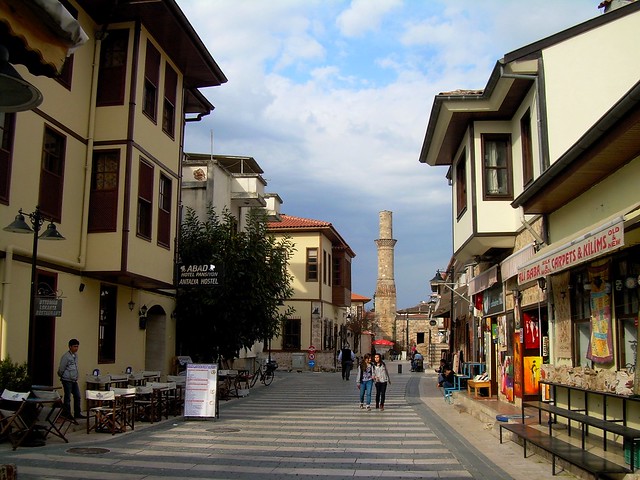 The area is full of restaurants, small hotels, cafés, tourist shops, and bars as one might expect, but there are also small grocery stores, clothing shops, bookstores, and lots of houses just like anywhere else in the city. 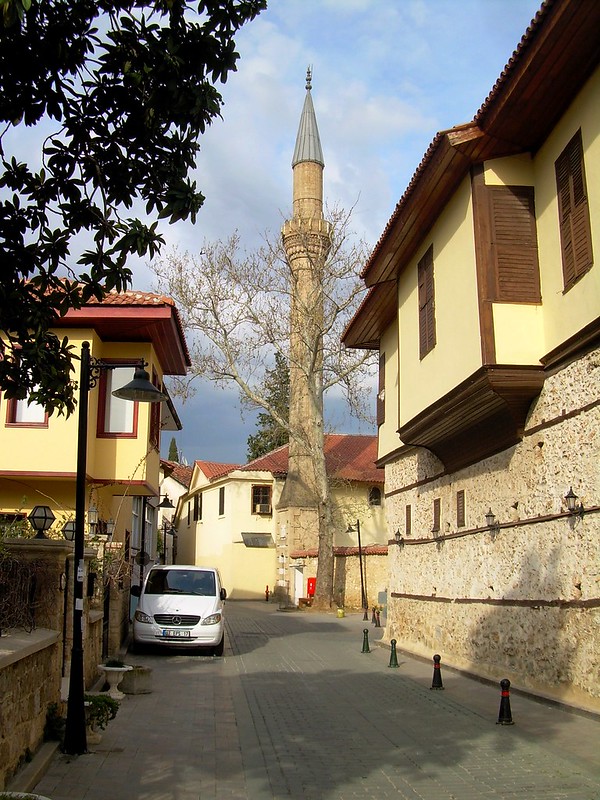 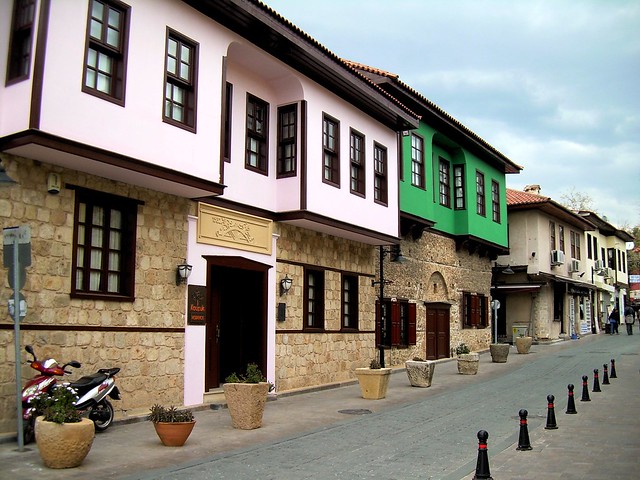 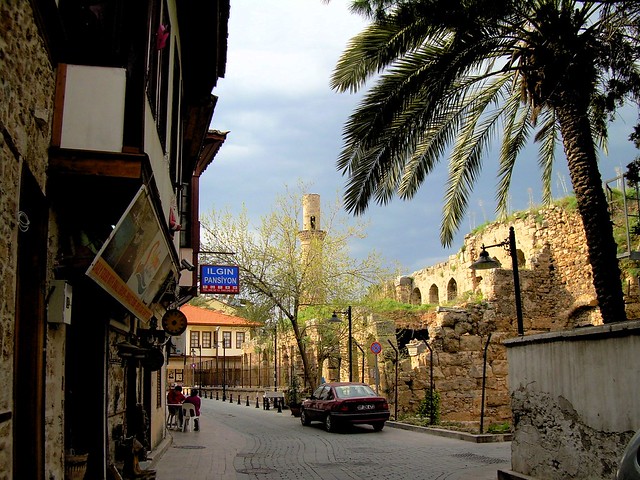 The hardest part about spending so much time in one place has been the weather.  Seems like everyday has been perfect for bicycle touring.  I spent all winter cycling through the cold, rain, and short days only to spend the brilliant spring sleeping inside.  Not the best planning.  I do like the rest, however.  I’m already thinking about where I could take a break next winter.

2 Responses to Spring in Antalya