With the exception of two or maybe three holidays (Children’s Day, Çocuk Bayramı, and Labor Day, İşçi Bayramı), I’ve been to Turkish class every weekday since since I’ve been in Antalya.  In that respect it’s sort of like work, except that instead of getting paid, I pay.  Another difference is that I spend my evenings doing homework.  Sounds like some self-inflicted punishment, doesn’t it?

My first lessons were private with Mehtap, a young ambitious woman who opened her own language school in Antalya a few years ago.  I stayed with her mother, Fadime, and brother, Murat, for almost two months before moving into a house in the old historic part of the city.

Fadime is a good cook.  Her hummus, dolma, and sarma dinner was my favorite: 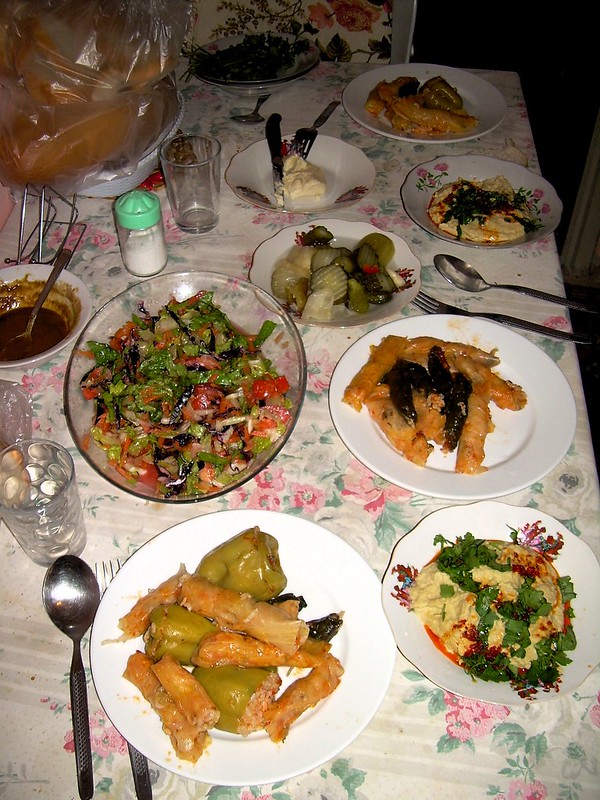 From Fadime’s house to school I bicycled every day along the tram tracks, something I have never done in the US!  At first it seemed crazy, though it’s hard for me to even remember that now since I’m so accustomed to it.  The trains run fairly frequently in the mornings when everyone’s going to work or school, including me.  At first I was quite vigilant about keeping an eye out for the trains, but before long riding the rails became normal.  One day, I was wondering what on earth the horrible racket behind me was.  Bah!  Oops, I’m going to be run over!!!

There are a couple tight turns in the system.  If a train’s on the inside track, well, you can’t see a thing coming toward you on the outside track.  I quickly came face to face with a train like this one day!  Bah, it’s a wonder people don’t get killed and that they actually allow you to ride on the tracks at all.  Oh wait, after riding these tracks for a couple weeks, I noticed for the first time a fairly prominent sign prohibiting cyclists.  Haha!  Turns out these signs are on every electricity post between the two sets of tracks!

I don’t have a photo of the rails, but check out this horse I saw in the center of the city: 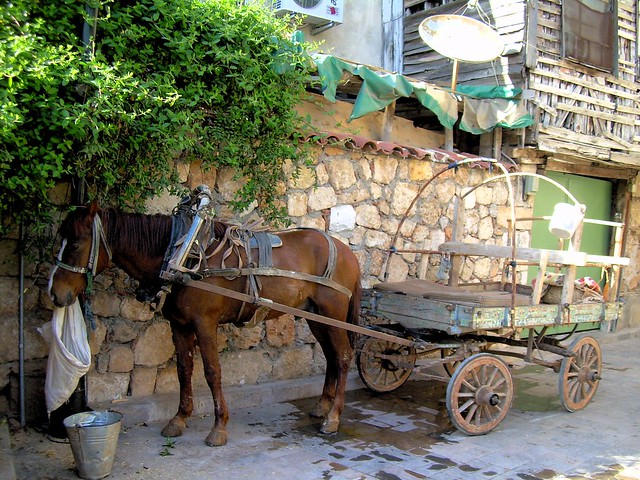 I guess the signs prohibiting cyclists from riding on the tram tracks are sort of the like signs prohibiting bicycle parking in the courtyard of some of the government offices that I’ve had the pleasure of visiting.  I remember the first of these offices I went to.  There were of course guards out front, and a sign indicating bicycles weren’t allowed in.  I quickly scanned the area for a place to leave my bike, noticed all the bikes in the courtyard, ignored both the guards and the sign, and walked right in.

I’m getting used to ignoring the signs.  Just yesterday a friend and I were clowning around, taking photos in the busy city center.  We ventured into a mosque courtyard to take some photos in the garden, walking right past the sign staying stay off the grass.

Antalya is home to Akdeniz University, a large university about the size of CU Boulder.  The campus is pleasant.  Student-led anti-government protests a few years ago prompted the authorities to implement security measures to enter the campus.  Per the new rules, you now need to show a student id.  However, it turns out you can enter by bicycle, mumble something about “öğrenci” (student), smile, wave, don’t stop, and you’re on campus.  As they like to say in Turkish, “olabilir” (anything’s possible).

Photo interruption.  Here’s the view from the balcony at Mehtap’s school with Andrea, a student from Leipzig (and, interestingly, not the first photograph of a woman from Leipzig on this blog): 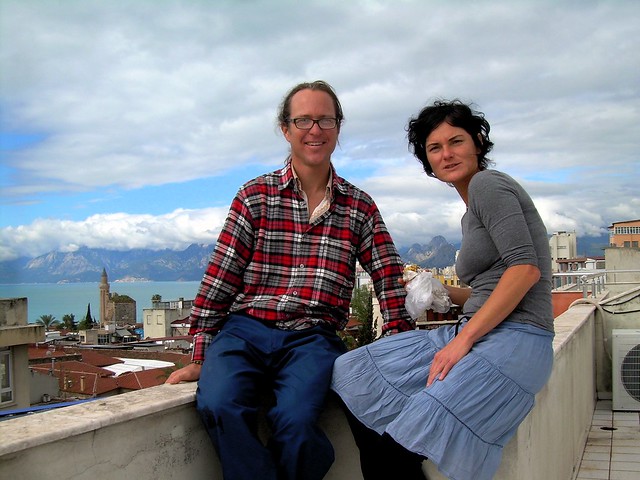 My Turkish is slowly coming along.  The grammar is unlike any other language I’ve studied.  With Mehtap I started with sentences like “Bu ne?” as Mehtap pointed to a pen.  I’d respond with “bu kalem“.  When I get frustrated with how difficult my class is now, it helps to remember just how little Turkish I knew four months ago.  I switched schools and started at TÖMER about four weeks ago because I wanted group lessons. 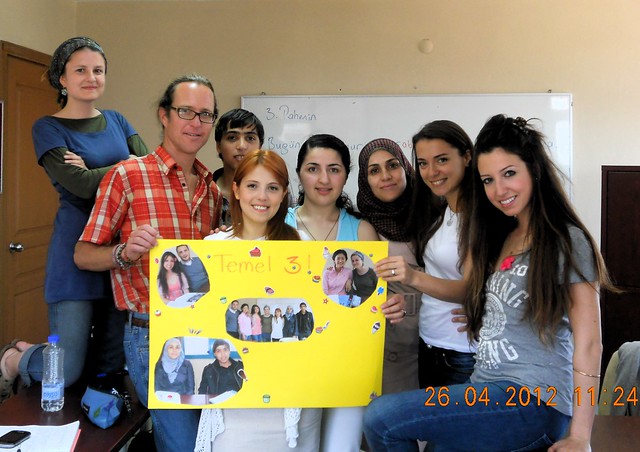 Many days I feel like I’m the only one in class who has no idea what anyone is talking about.  On the other hand, now I’m able to manage some telephone conversations.  Mostly I talk with friends, but I tried to handle a bureaucratic-type call yesterday.  It wasn’t the first time I’ve tried such a call, but it was the first time that I’ve been able to understand the questions and answer appropriately.  Wow, what an accomplishment.  Still without a bicycle, it’s things like this that I get excited about!

Every Thursday evening is a critical mass-type ride called PAB, Perşembe Akşamları Bisikletçileri (Thursday evening cyclists).  Quite a few cities in Turkey participate.  In Antalya they started just two years ago.  We celebrated the 100th ride with the mayor’s participation, a short tour and a party.  Only a week or two later was another reason for a celebration, two years for Antalya PAB!  It’s really more of a social event though on March 8, we went through the city enthusiastically shouting women’s slogans and bicycle slogans.  Every ride I’ve been on has been led by a woman.

On some weekends I’ve joined a large hiking group, TODOSK, to do some walks in the nearby mountains.  Oh, of course that stands for something too: Toroslar Doğa Sporları Kulübü (Toros Mountains Nature Sports Club).  They do some cycling and mountaineering, but so far I’ve only joined for the casual treks.  Through both PAB and TODOSK, I’ve met some great people, making it harder and harder to leave this city. 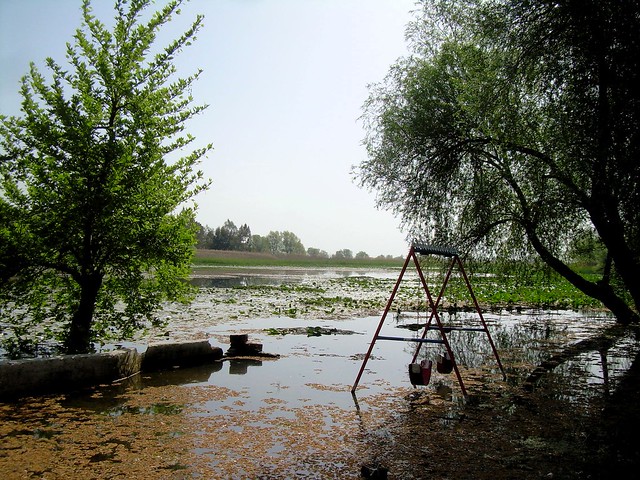 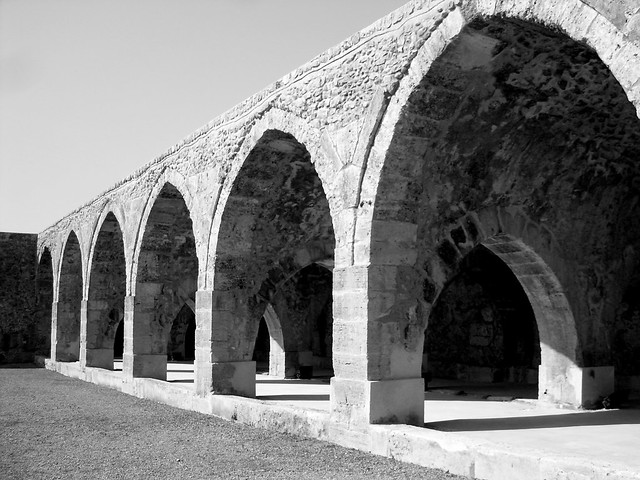 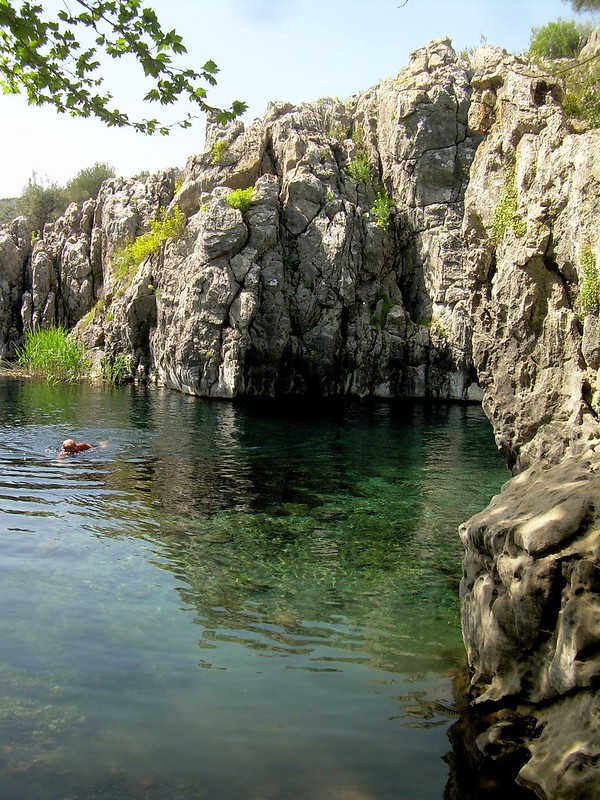 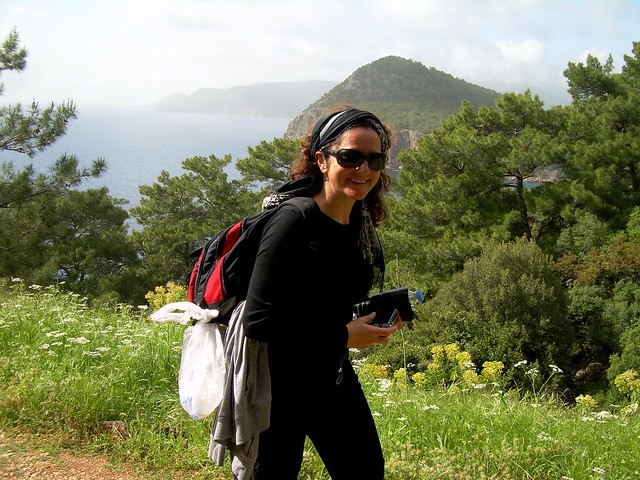