Georgia.  My first new country since entering Greece last December.  Finally getting somewhere, I guess.  Thankfully that’s not the goal.  Several people — Snežana, Kris and Kristen, fellow cycle tourists — had all warned me that Georgians were the worst drivers in the world.  “But have any of them cycled in India?”, I wondered.  It can’t be that bad.  Yeah, right.  Imagine the chaos and insanity of India’s roads at high speeds, very high speeds.  It seems Georgian drivers have a death wish and no regard for anyone on the road, including themselves.  It’s awful, the worst drivers in the world.

Not all the roads are bad.  Some big highways have 4 lanes and shoulders — no problem.  Some little highways are littered with rocks, potholes, and cows, forcing low speeds — no problem.  Some country lanes have almost no traffic at all — truly wonderful riding.  However, I felt it was a bit of a miracle to survive some stretches of the busy two-lane roads.  The coastal road between Batumi and Sarpi was nasty, and a ~30 km stretch west of Gori was probably the most dangerous cycling I’ve ever done. 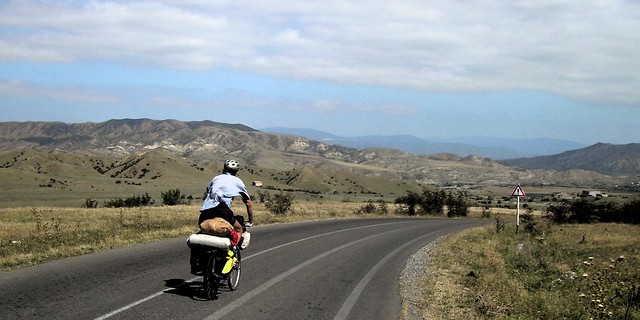 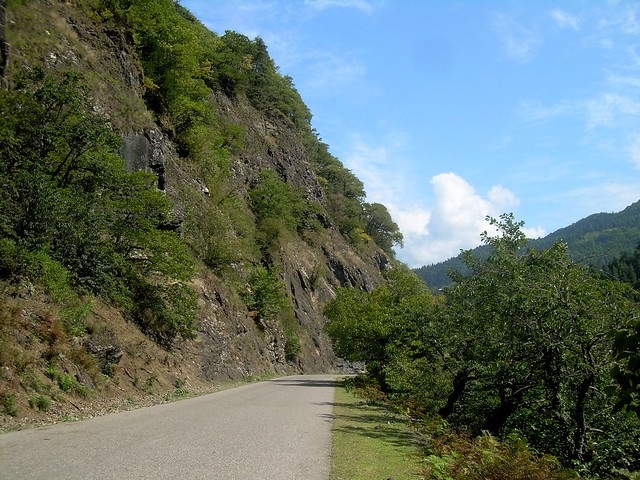 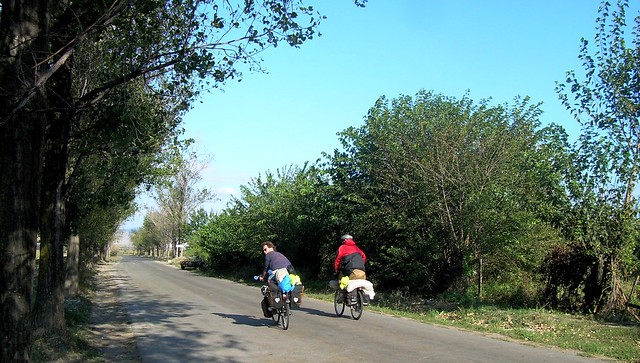 On my first night in Georgia, camping along the Adjarisckali River, I had just fallen asleep when a group of men came to my tent with wine and other welcome gifts.  One spoke Turkish, and they buggered off when I told them I was tired and wanted to sleep.  They assumed I was a Turk and a Muslim, and that’s why I’d rather sleep than drink at midnight. 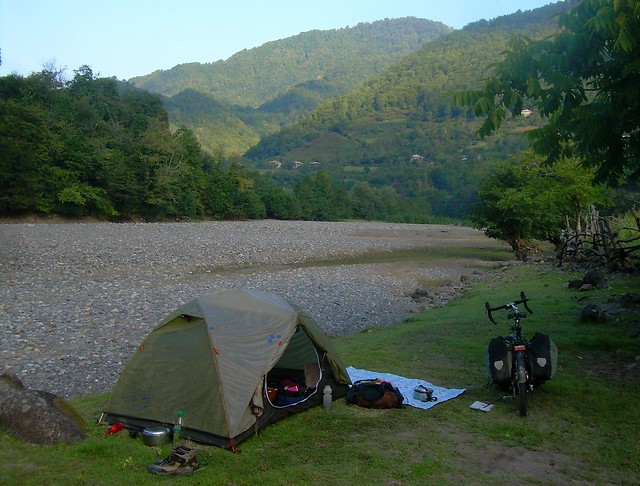 The next day I learned my first Georgian word, chacha.  It’s the local distilled beverage, made from grapes and other parts of the grape plant (stems, leaves?).  A couple shots of that, and the climb was easier.  The most drunk and belligerent of my hosts was a little annoying, but his buddies gave me an easy out, and I cycled away without incident. 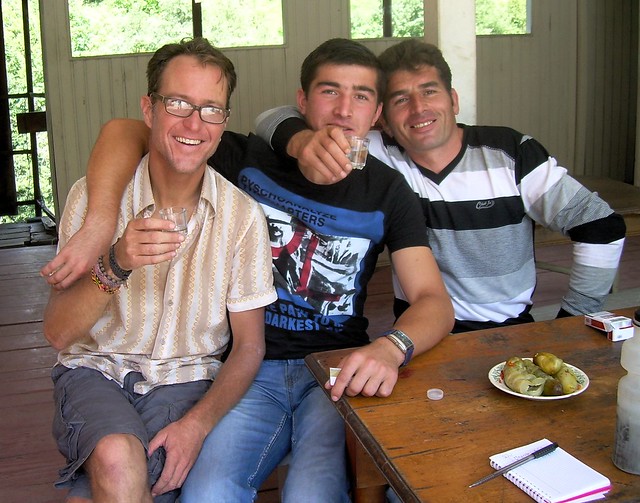 A day later at the top of the pass — it took 110km to climb 2000m from the Black Sea, never steep, but long and busy with minibuses, trucks, and cows — I was hungry and attempted to order some lunch.  Before I was able to sit down, I was invited over to a table with three guys, two bottles of chacha, some bread, and a tomato cucumber salad.  After a couple shots, they paid me almost no attention.  I took full advantage of the food (turns out my attempt at ordering failed) and took it very easy with the booze.  They were drunk and barely noticed when I left to start the bumpy descent down to Adigeni.

In addition to hospitable drunk Georgians I also met cycle tourists on this road.  Like Mohammad from Tehran: 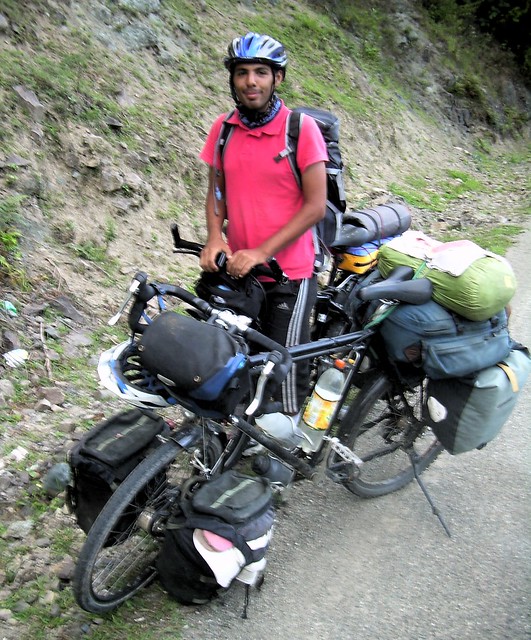 Wouter and Rune from Belgium: 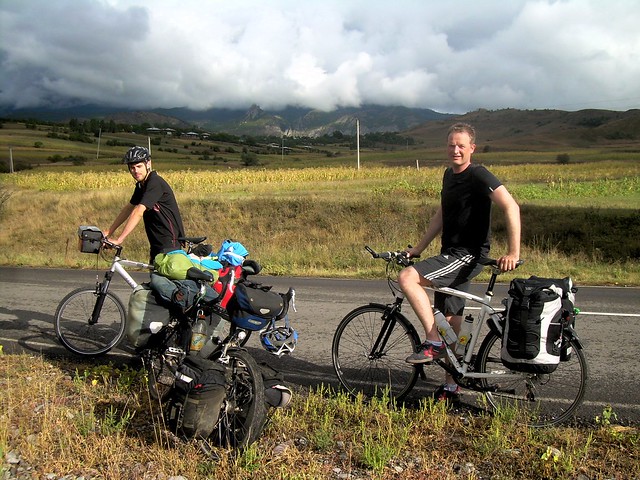 It was also along this stretch that I met Ahmet, Rik, and Bob who I ended up travelling with the rest of the way to Tblisi. 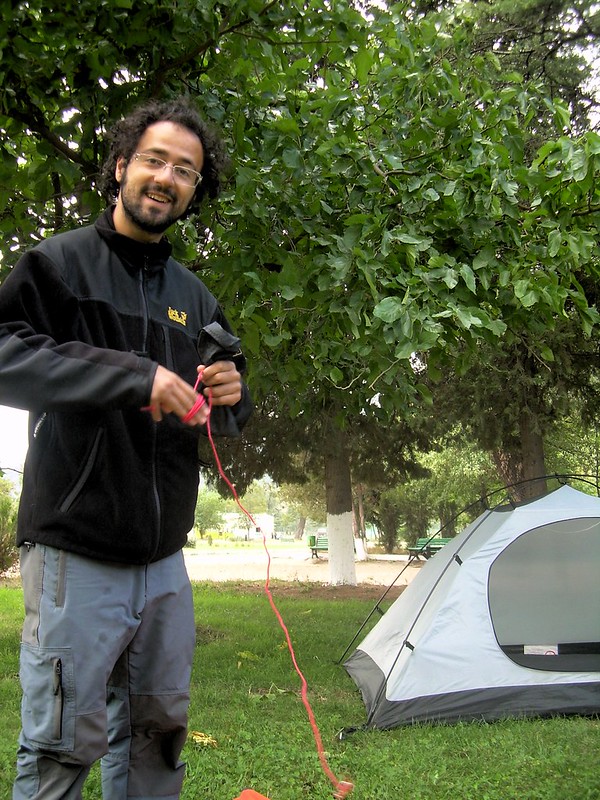 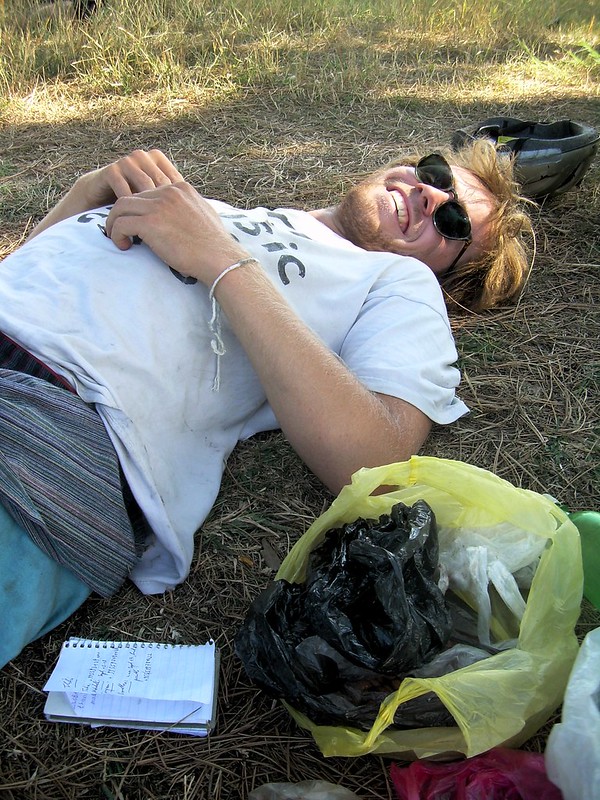 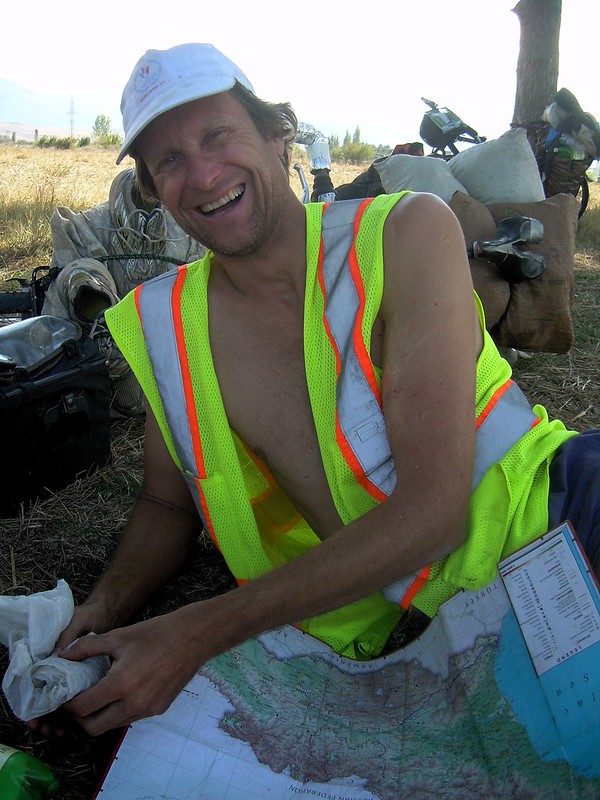 It was an unusual group.  Ahmet was hitchhiking while Bob and Rik were on bikes.  They’d often meet up for lunch in a town and then plan to leave some sign on the side of the road so Ahmet could find the camp spot in the evening.  They said this had worked without fail, but I’m missing the crucial bit of information of how long ago they started.  On our third day together all of us failed to get to the meeting place in Kaspi.  Ahmet overshot it in the car while we cyclists underestimated the headwind, struggling a difficult 25km on the flats that day.

It’s a small world out there.  Bob knew my friend, Sage, who I pedalled with from Erzurum this summer, and Ahmet is good friends with Banu and Deniz, who I stayed with in Ankara earlier in the summer.  I didn’t figure out the connection with Rik, but he’s from Leipzig just like Andrea who I studied with in Antalya last spring and danced with in Olimpos a few weeks ago.

The four of us — Ahmet, Rik, Bob, and me — found a place to camp in a park in Gori late one night.  As we were setting camp, a man, Joseph, came over and insisted I come to his building for “administration”.  Great.  None of us were so keen on the park, and we wondered what this guy wanted.  I was escorted into the building, made to sit on the couch, and given a shot of chacha.  I watched enough of the Spain-Georgia soccer match on TV and drank enough chacha to humour them.  Back at camp, I received many thanks for taking care of the administration tasks for the group while they prepared dinner.  I mean, someone has to do it.

In the morning we woke to find another, more famous Joseph watching over our camp and protecting us.  It was Stalin himself in the form of a larger-than-life statue.  Gori is where he was born and raised. 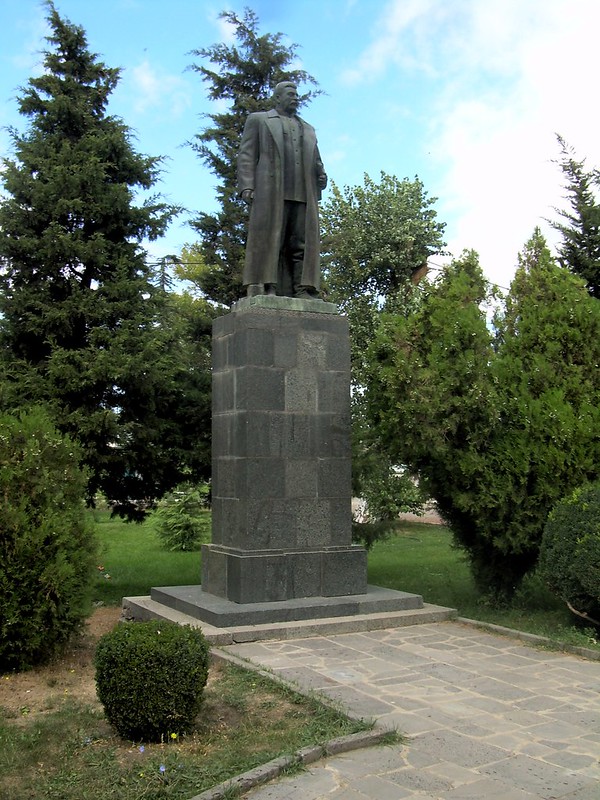 In spite of four days of strong headwinds, two days of poor roads, and countless places to buy 500ml of draft beer for 1.20 lari (US$0.72), I made it to Tblisi.  I said goodbye to my new friends — will I see them again? — and headed over to old friends.  Kris and Kristen lived across the street from me in Boulder ~10 years ago and have spent the last three years in Tblisi.  They even picked up a new family member, Ben, along the way somehow. 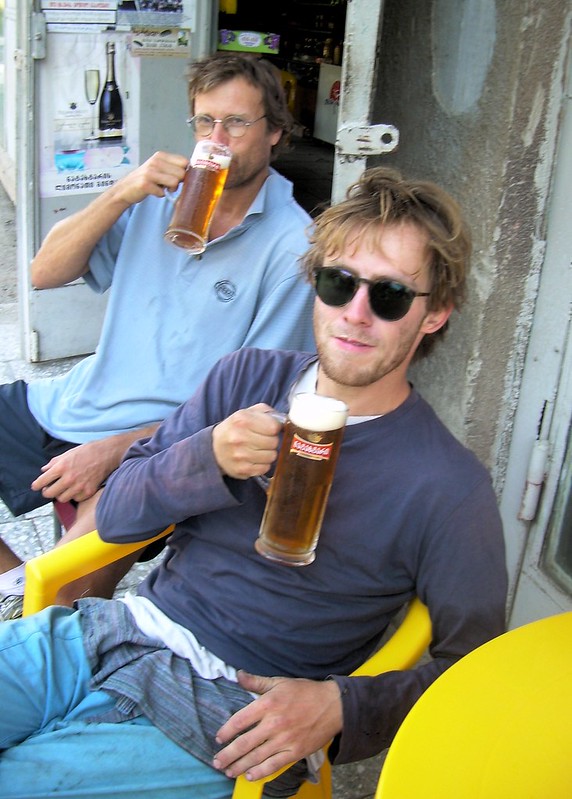 Mama means father in Georgian, so mama and mama: 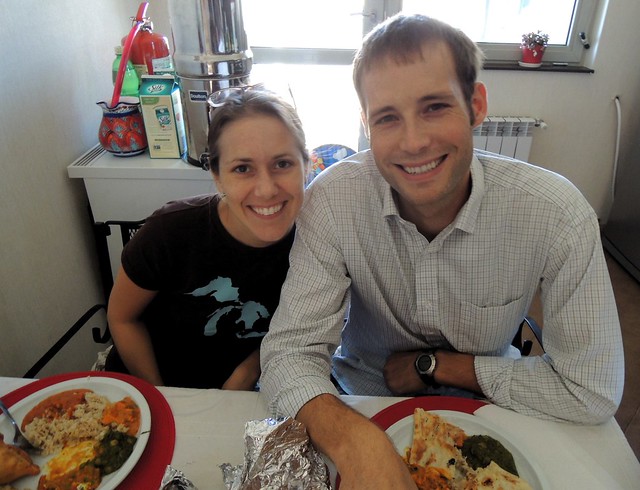 Ben means I in Turkish, so Ben ve ben: 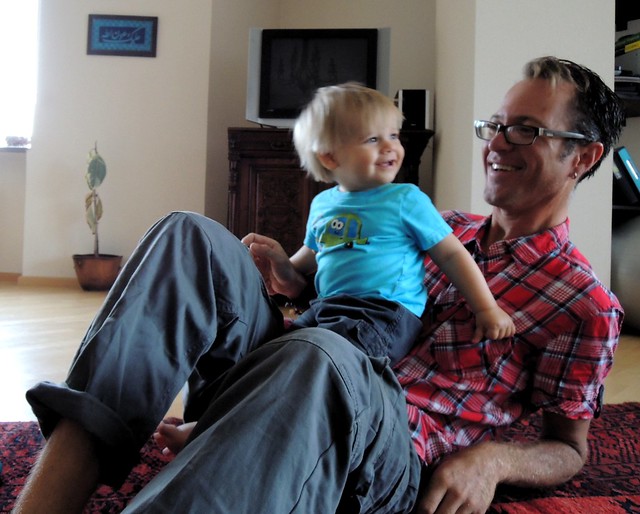 Finally, my last “friend”, a gambling tycoon in Agara who charged 0.10 lari (US$0.06) to spin the wheel — not quite Las Veges stakes, or even Central City for that matter.  Down 0.20 lari I quit and headed back to the road. 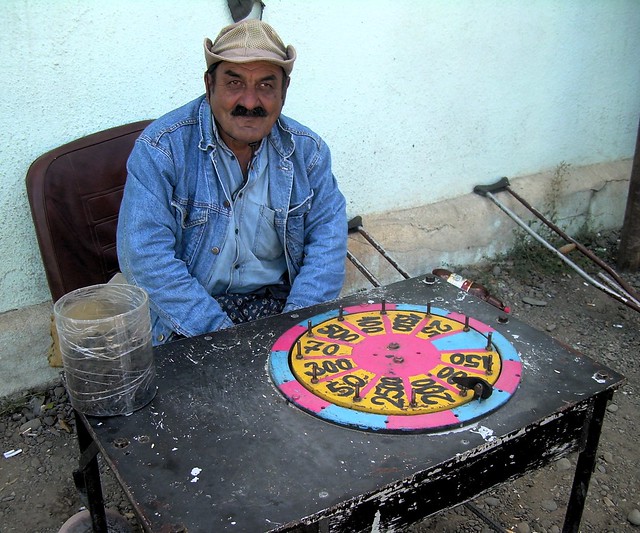 3 Responses to Friends in Georgia