I completed another month of Turkish lessons.  I passed the two-day five-part test and can now continue on to the B level classes!  Woo hoo.  Whether I’ll actually do that remains to be seen.  Instead of sticking around for the next course I took off just after my exam for a long weekend in Kapadokya (Cappadocia) with Ferda.

A few weeks ago I compared Vardzia in Georgia with Kapadokya.  That comparison was giving way too much kudos to Vardzia.  Vardzia is one underground city set in a pretty canyon.  Kapadokya covers a large area which includes over 200 underground cities (perhaps 10 of which are open to tourists), hundreds of churches carved out of the rocks, and countless valleys full of sculpted rock pinnacles the likes of which I’ve only seen elsewhere in Utah.

Being December we kept an eye on the Kapadokya weather the week before leaving Antalya.  In our four days in Kapadokya it went from short sleeve weather to snow. 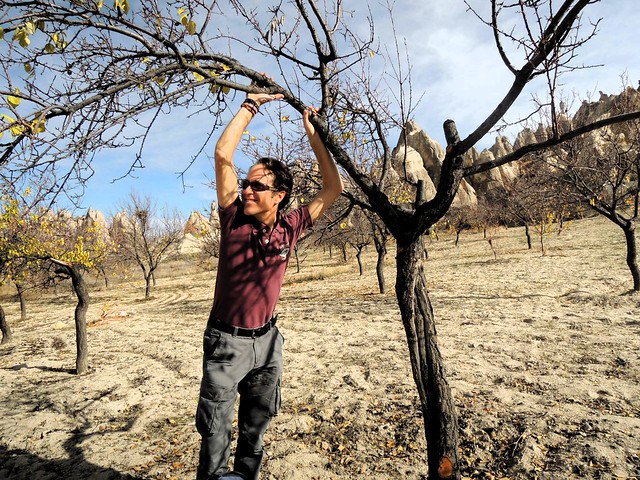 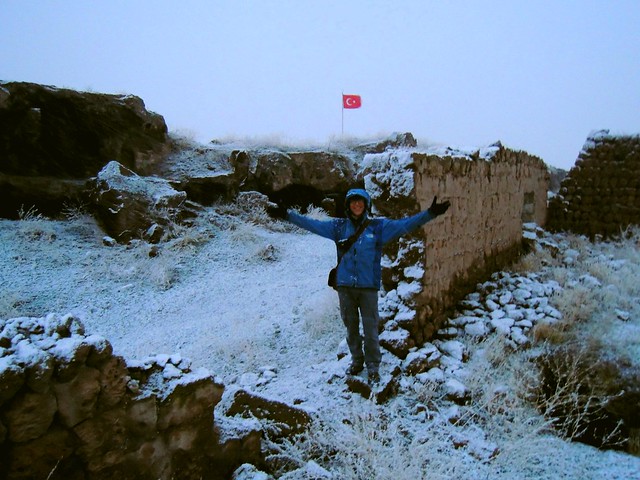 It was perfect.  On the two sunny warm days we went for a long walk and a horseback ride.  The coldest, wettest day was the last — we visited an underground city where it’s always dry and 15°C!  Ok, maybe not perfect: I would love to see Kapadokya with a good snow cover.  If we had been able to stay one more day, we would have really lucked out.  Heck, perfect would have been to stay another 10 days.  There’s a lot to see and do.

We stayed in Göreme.  Urgup would also be a fun place to stay with a rather different vibe than Göreme.  We did some wine tasting one evening in Urgup.  Göreme attracts a younger, more international crowd.  Being young and international we fit right in.  December’s not the high season so it’s not too crowded, but I counted 45 balloons in the sky on Sunday morning! 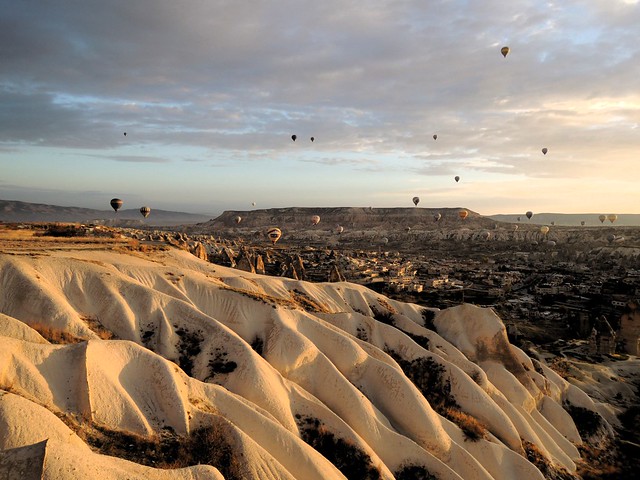 Kapadokya is not cheap.  Turkey in general is not a cheap place to travel (think Mexico or Poland or Slovakia, and you’ll be in the ballpark), and Kapadokya is expensive for Turkey.  A foreigner who has lived in Göreme for three years explained that “it rains money in Göreme.”  Those balloon rides start at about 200tl — 10 customers in a balloon, 45 balloons; I was looking at 90,000 tl (US$50,000) that morning.

I actually visited Kapadokya once before, in 1998.  When I mentioned that to the “money raining” person, they said, “wow, it must have been cheap then.”  Well, sure, everything in Turkey costs 3-4 times more than it did 14 years ago.  Göreme’s no surprise there.

I am surprised by how little I remember of my first visit.  One thing that came back to me while Ferda and I were walking through one of the many sculpted valleys is an encounter with an Italian woman 14 years ago.  Once she learned I had visited similar geologic formations in Utah, she asked in hesitant English, “are the pinnacles in Utah also so … male?” 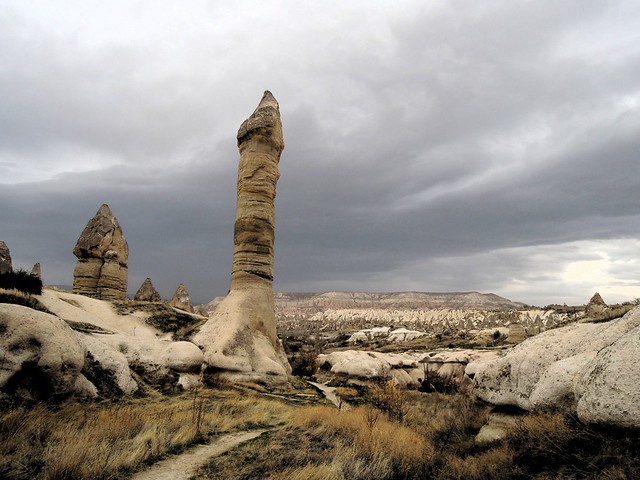 Continuing with the Utah comparisons, Kapadokya is not as colorful as Utah.  The rocks are mostly white, perhaps light brown.  There’s no red.  We did have some fruit trees showing off their yellow leaves, and Ferda added some of her own color. 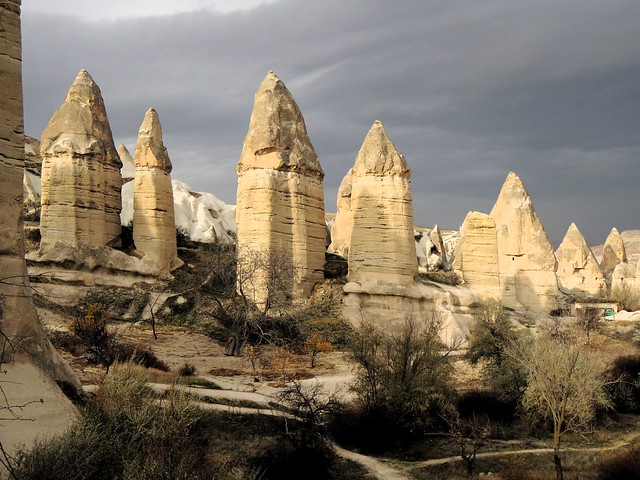 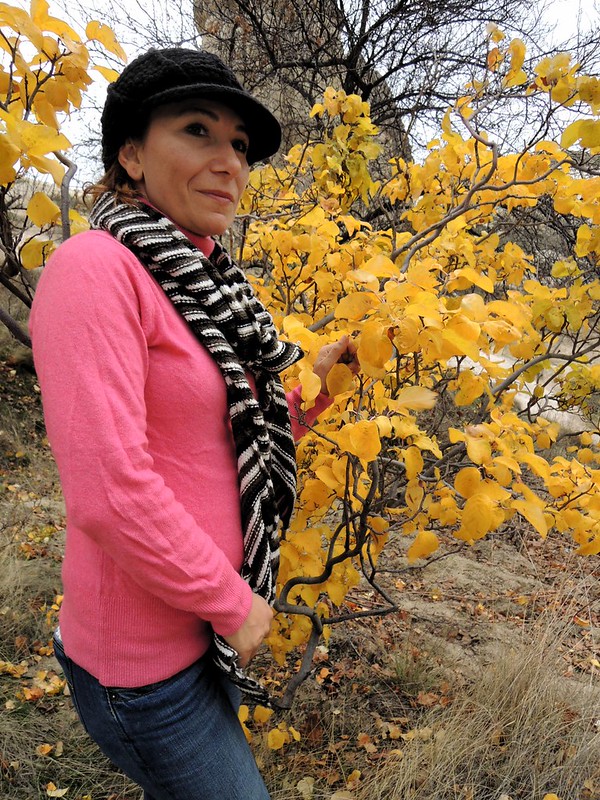 On the other hand there are quite a few days worth of hikes just walking distance from the hotels in Göreme.  You won’t find that so easily in Moab.  We set off the first day with no plan and no advice, just walking in the direction of interesting rock formations.  We ended up finding carved churches, a slot canyon, and then came upon a balloon launching site. 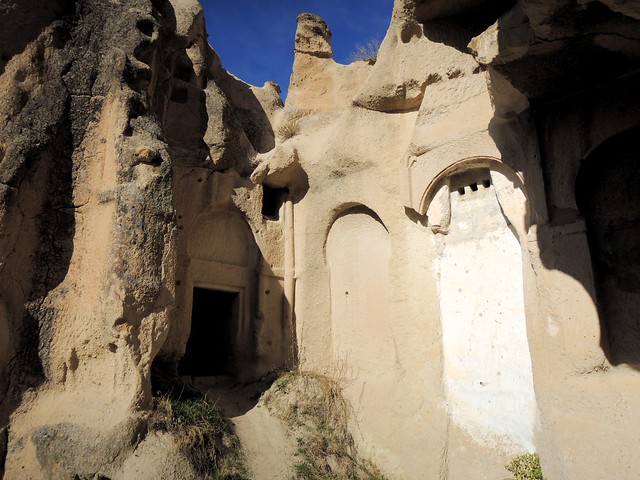 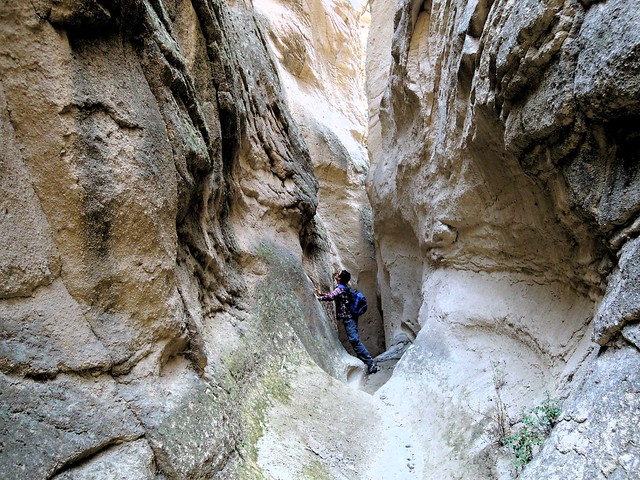 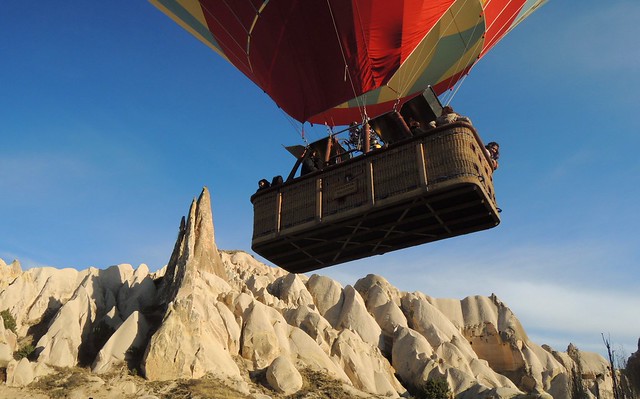 For our horseback ride we joined a small group including the owner of our hotel and his new fiancée, Osman and Nurgül; a couple from Konya; and our half-crazy guide, Gökhan, who was celebrating his birthday in typical guide fashion.  It was a great ride with a fun group through incredible scenery.  It had been about ten years since I’d been on a horse.  Two hours in the saddle feels like enough for another ten… 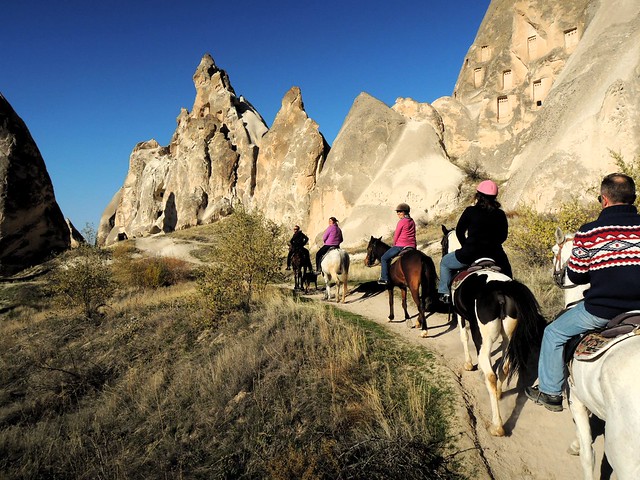 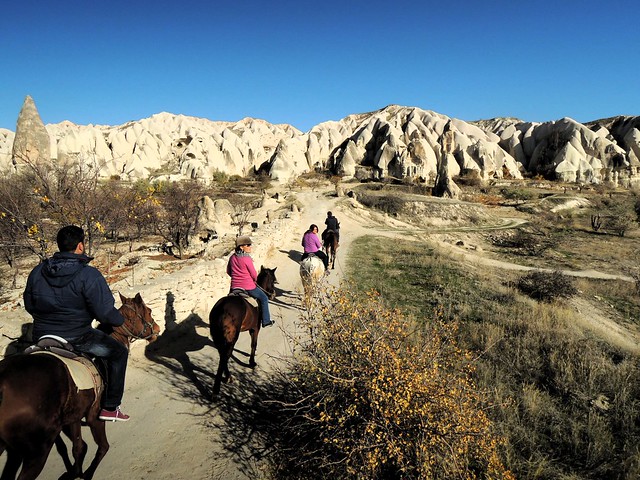 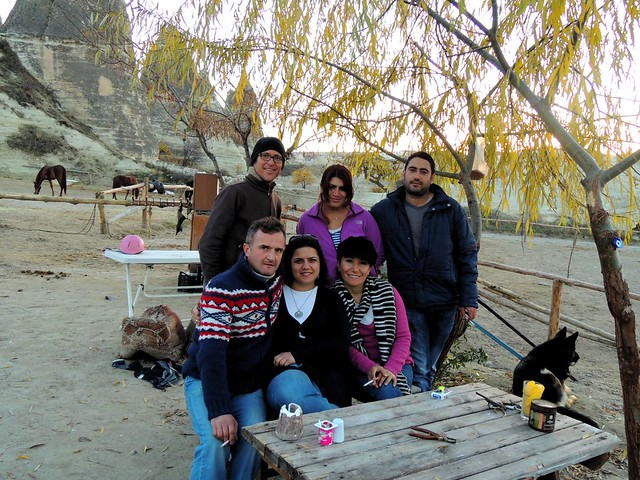 With so many underground cities open to tourists (and costly entrance fees unless you can finagle a Müzekart), how do you choose?  Osman recommended Kaymaklı and off we went.  Since I vaguely recall having visited Özkonak and Derinkuyu, I was happy with the recommendation.  We entered with a bus full of Japanese, and I was afraid the place would be disappointingly crowded.  Not the case.  We usually had the tunnels and rooms to ourselves.  After 30 minutes or so, we even went back to the entrance to get our own guide which was also fun.

Only a small fraction of the city (5%?) is open for visiting and only part of that is lit.  At first Ferda was a bit scared to head off down those dark passages, but after an hour or so, she took off with the guide’s flashlight and it was all we could do to keep up.  The guide said that she had taken him to some rooms that he had only visited 5 or 6 times before! 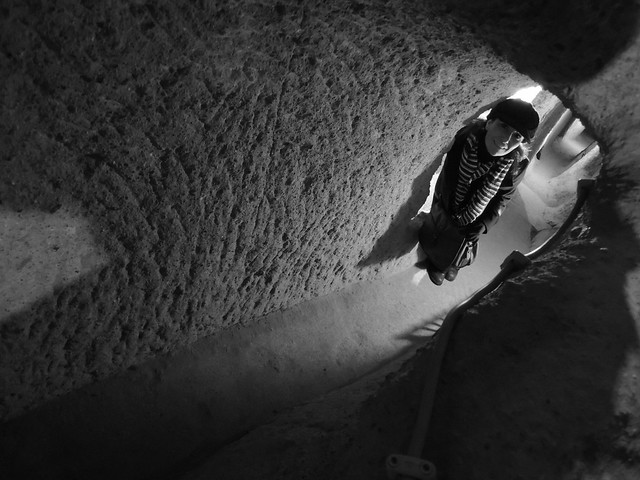 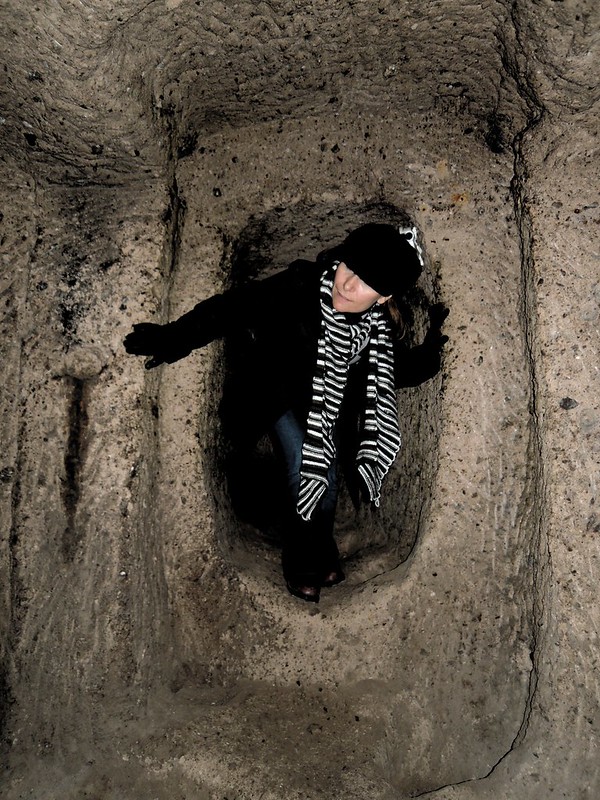 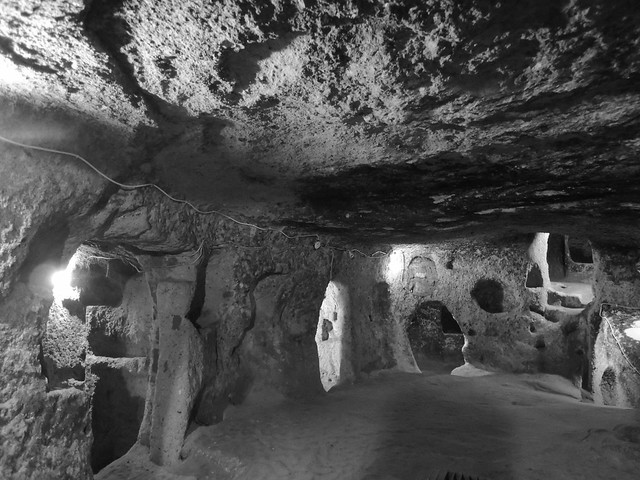 These underground cities were built to protect residents from marauding armies.  The one we visited at Kaymaklı housed 5000 people at its most crowded.  It was connected with a 9 km tunnel to Derinkuyu.  Residents could barricade all the entrances and be self-sufficient (food, water, candles, fuel, air, waste disposal) underground for 2-3 months!  Wow, that’s crazy.  We emerged after a couple hours surprised to see it was still snowing and wandered around enjoying my first snowfall since February in İzmir. 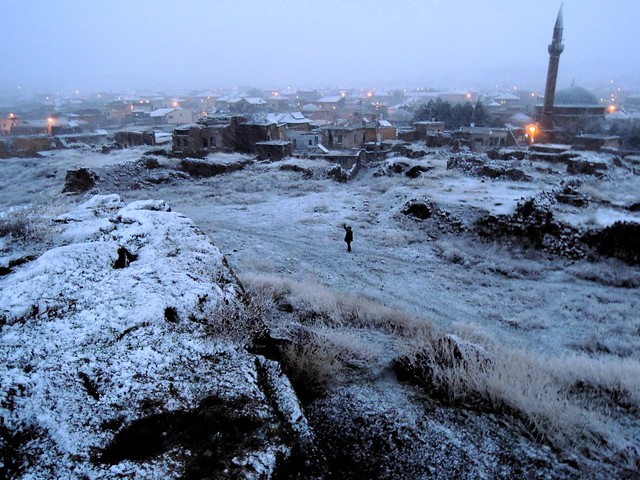 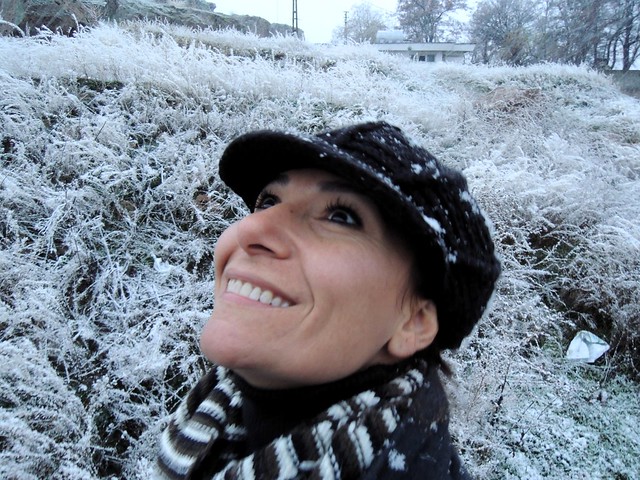 The end of the long weekend came quickly.  We took an overnight bus back to Antalya, and Ferda headed immediately to work.  I’m busy planning my next adventure.  In three days I leave Turkey and fly to Mexico City. 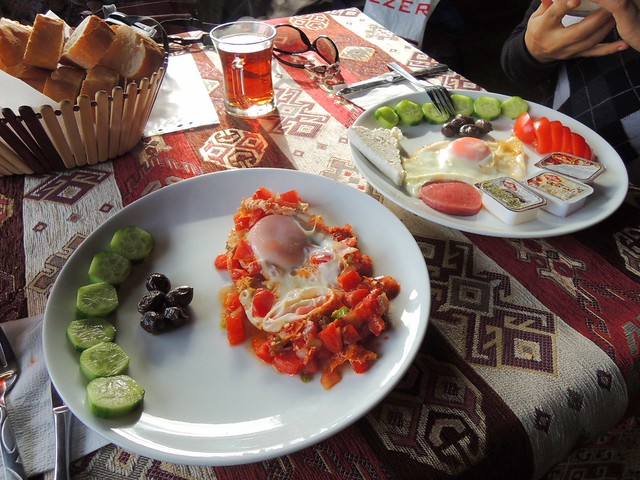 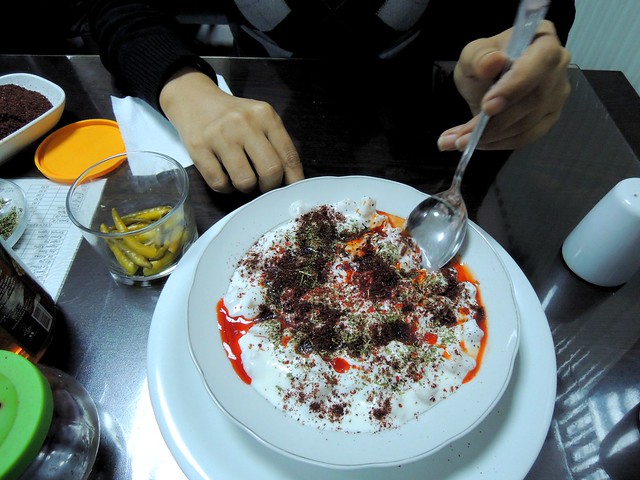 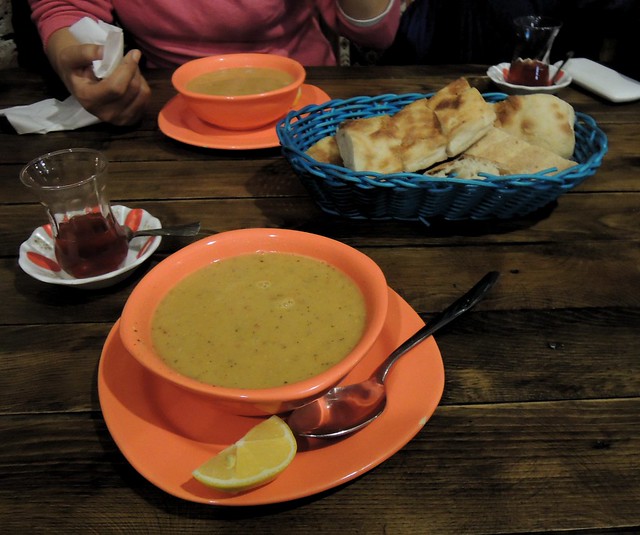 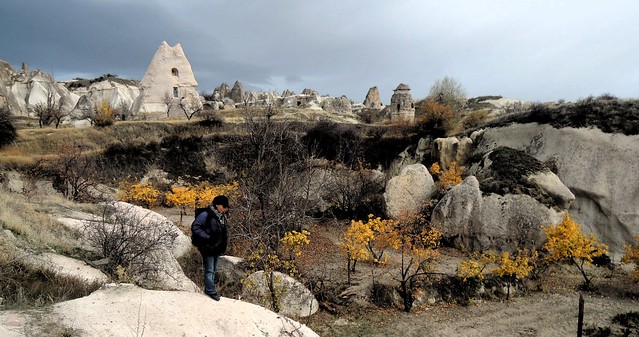 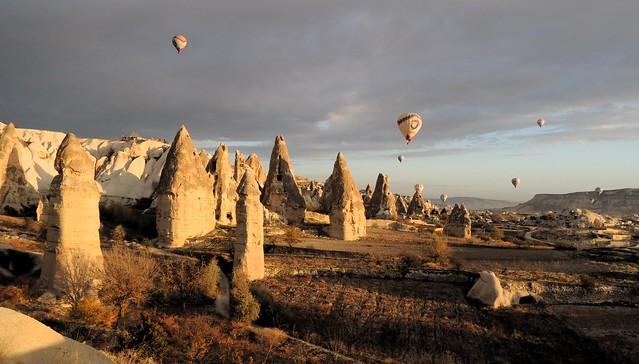 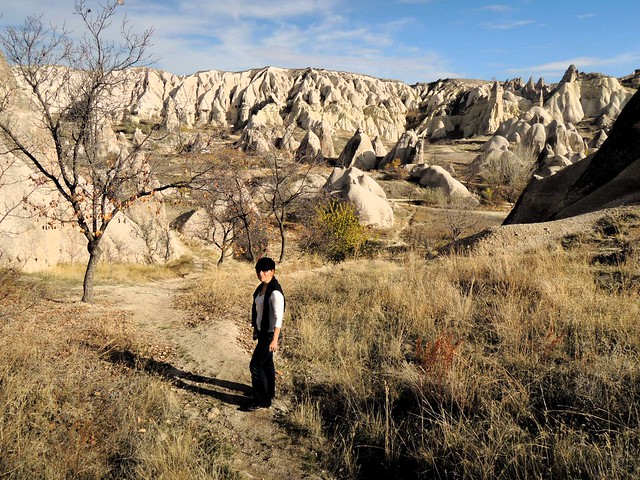 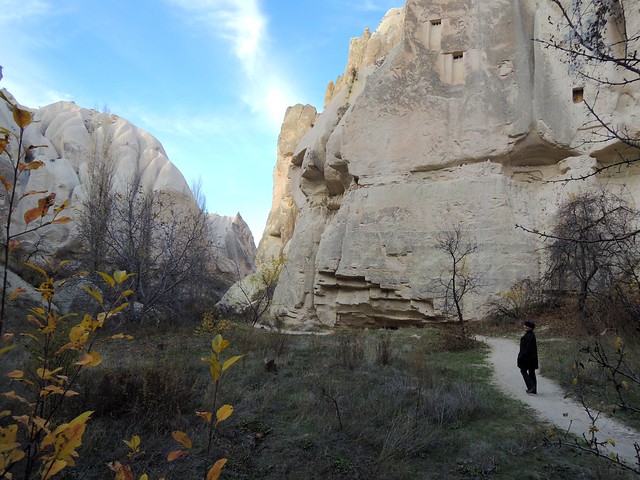 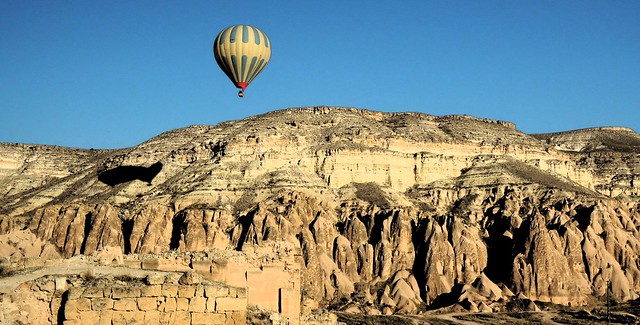 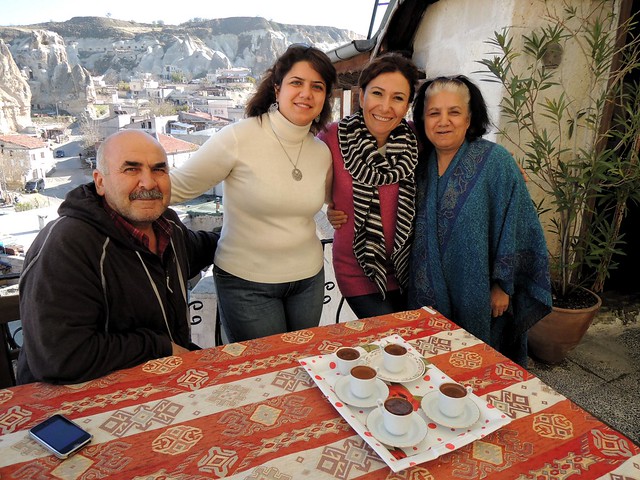 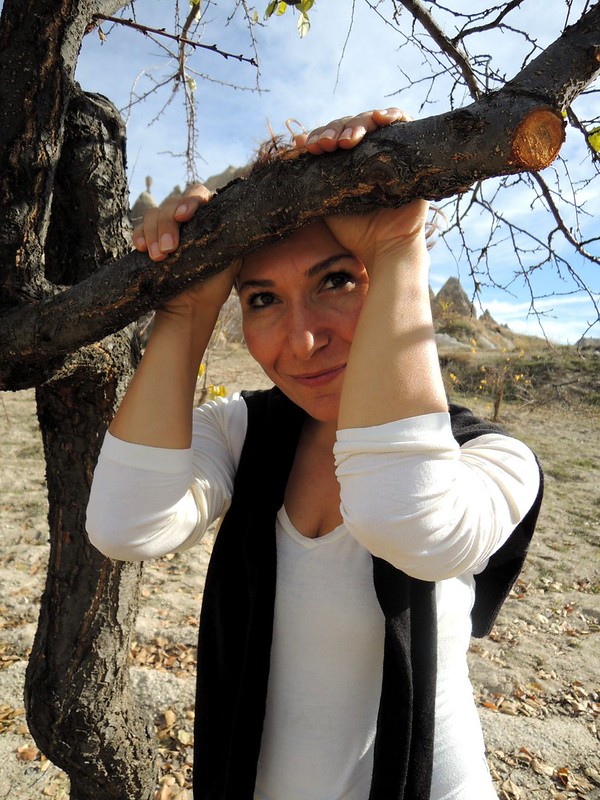 2 Responses to Four days in Kapadokya