Turkey ought to be full of super places to sea kayak.  It probably is.  Look at a map of the SW coast, and you’ll see endless coves and peninsulas.  There is, however, little sea kayaking actually going on.  This seems largely for two reasons:

The tax problem can be overcome with money which is how Ferda and I managed to get out for a half-day tour from Üçağız.  However, because kayaks are so expensive, there are few places that have them and of those places few are willing to let the kayaks go without a guide.  What this means is: don’t get too excited looking at that incredible map of Turkey’s SW coast.  Finding a kayak can be very difficult. 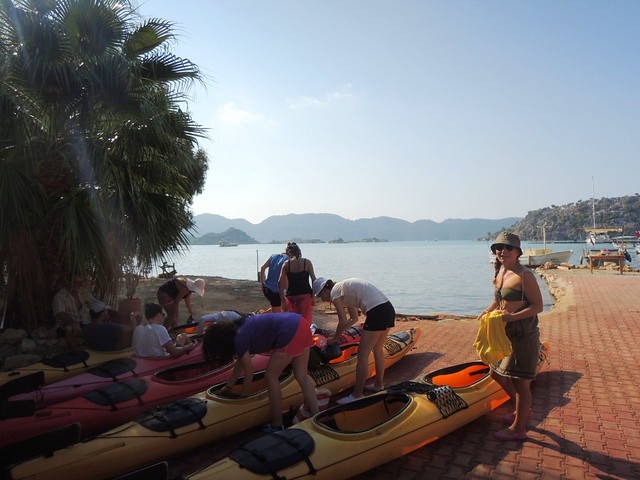 The stupid rules, however, are even more troubling.  Turkey is full of stupid rules.  Many of them prohibit entering just about every body of water you come across away from the coasts.  In this case the rules prevent kayakers from using the coastal water (in some areas) because kayaking is dangerous.  I am not kidding.  That is the reason given.

They let cars in residential neighborhoods, and they won’t let kayakers in the sea next to Antalya.  They claim there’s too much motor boat traffic, making it dangerous to kayak.  Yet — I love this — you’re allowed to swim in the same area.  This summer I was swimming every morning in Antalya.  I was learning how to swim — how to breathe, how to move in a straight line.  I tried to stay near the cliffy shore, but sometimes I’d look up and find myself out in the sea, sometimes even near boats.  Once or twice it felt perhaps dangerous.  You can swim, but not kayak!?

Another place you’re not allowed to kayak is in the Kekova/Kaleüçağız area.  In this case, however, the caveat is without a guide.  The same reason was given here as in Antalya: there’s too much motor boat traffic making it unsafe for kayaking.  Our guide warned us: this is the high season; you’ll need to be very careful of the boat traffic.  Well, crowded for Turkey is not crowded like we’re used to in many parts of the world.  Sure, there were boats, but it felt most dangerous when we were swimming at our designated swim stop, not when we were in the kayaks. 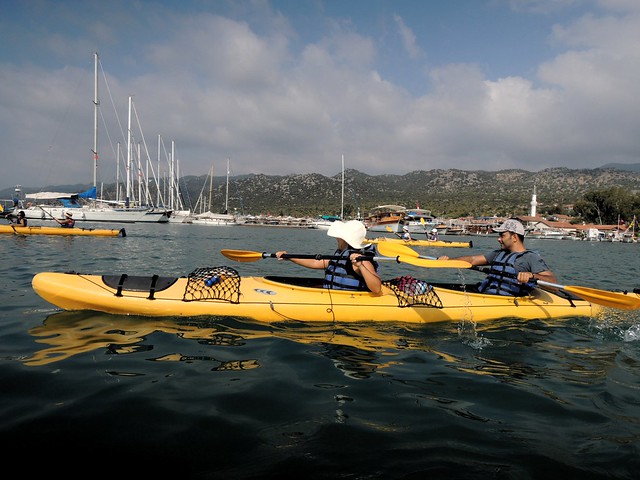 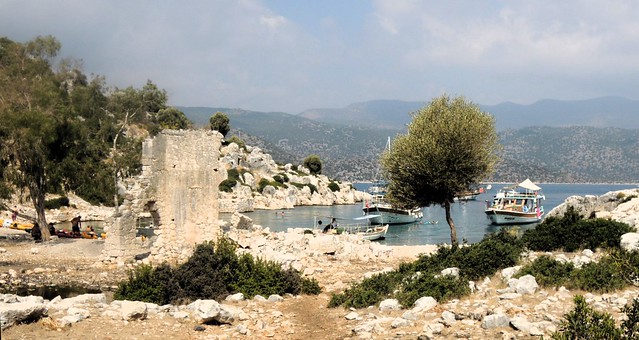 I have a friend in Antalya with a kayak, and he says the no kayaking rule is enforced there.  However, I imagine if you show up at Kaleüçağız in your own kayak, no one will say anything about paddling out there on your own — except maybe for the guides who obviously benefit from the monopoly.

The kayaking was fun, the weather stellar, the guide mediocre at best.  He seemed rather bored.  His body was there, his mind elsewhere.  He repeated everything in both Turkish and English at a speed which made understanding either close to impossible.  The season’s probably 3-4 months long, and he’s been doing it for 12-15 years.  It seemed like he’d given the tour 1000 times before.  He probably had. 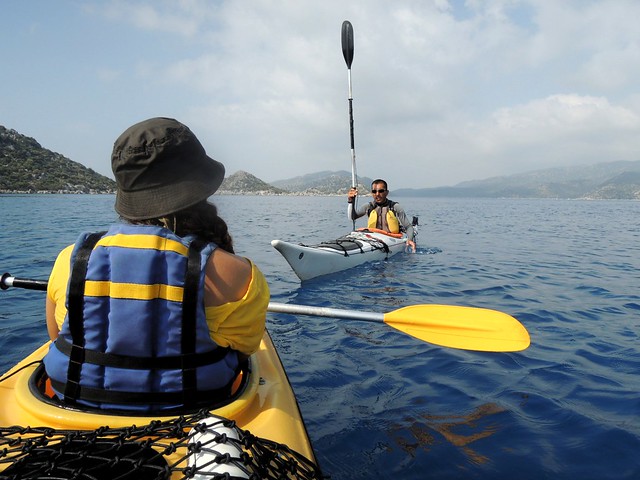 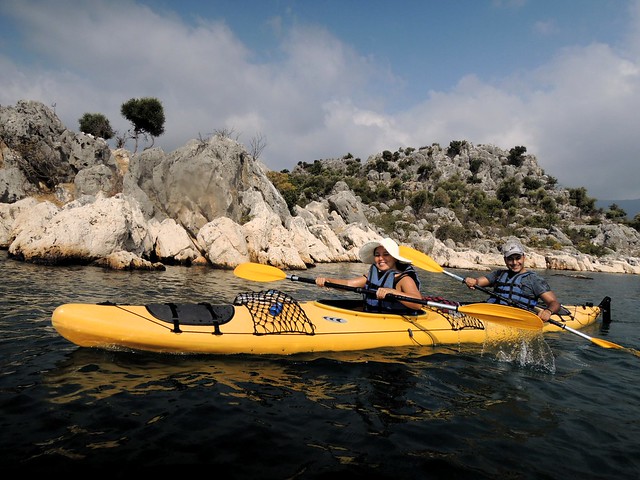 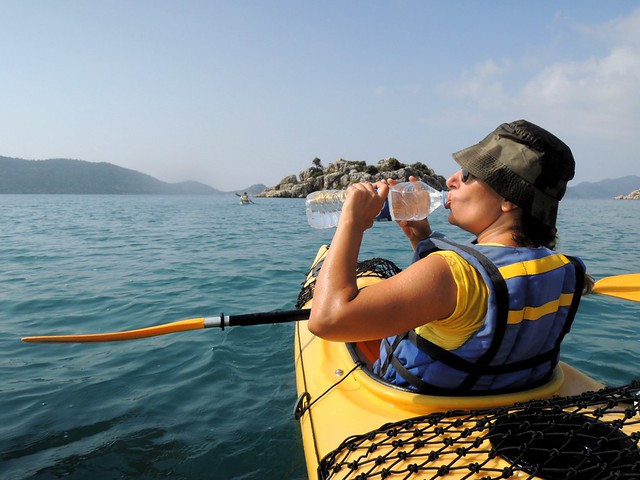 Kekova’s famous for its underwater ruins.  Well, that’s more tourist hype than reality.  There are some ruins under the water, but mostly it’s stuff on shore that is slightly submerged (because of an earthquake some 1900 years ago).  However, the ruins that we could explore on the island during our swim stop were more impressive than I expected. 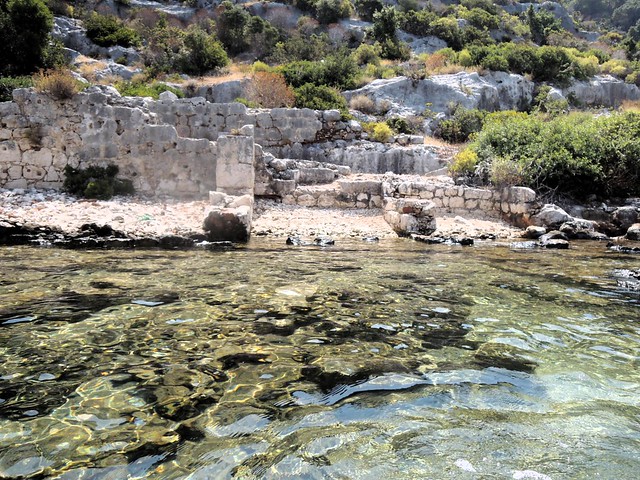 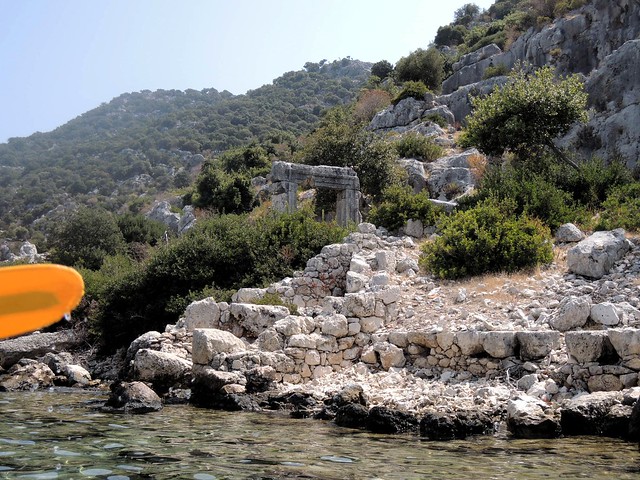 The villages of Üçağız and Kale(köy) (don’t forget your Müzekart — something the guide neglected to tell us before setting off… bah, what do we pay these guides for?) are kind of cute though neither takes more than an hour to explore thoroughly.  There’s no beach at either one, and the swimming isn’t great due to pollution — the bay is fairly closed, and well, as the guides warned us, there are too many motor boats. 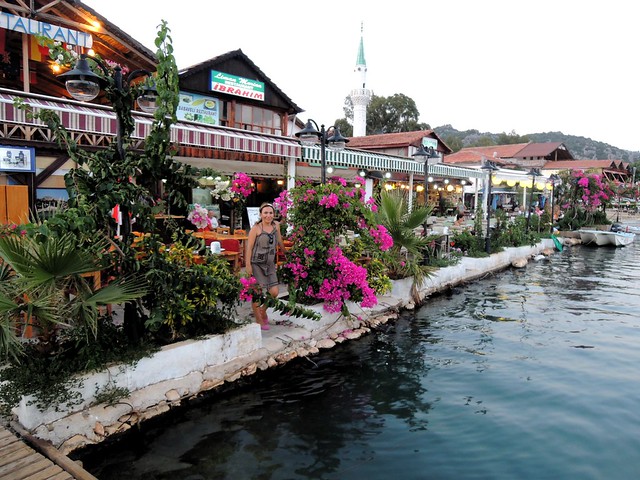 On the long drive from Antalya, Ferda and I stopped at Phaselis for a couple hours.  I had heard rave reviews from friends in Antalya and would definitely like to go back there.  With a picnic lunch it’d be an easy place to spend a day.  There are beautiful beaches and interesting ruins though it was rather crowded on the hot weekend when we were there. 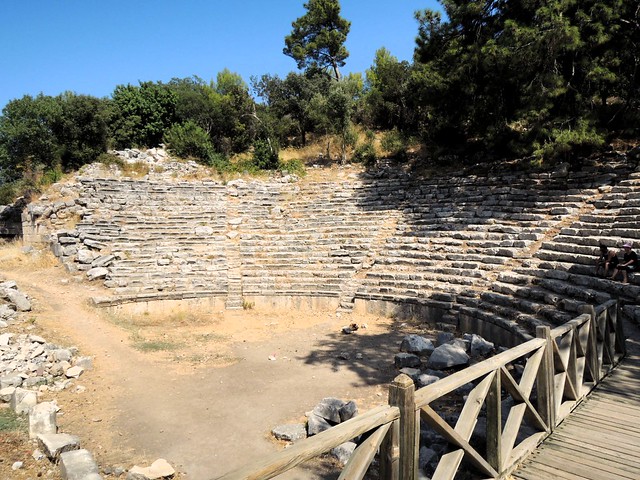 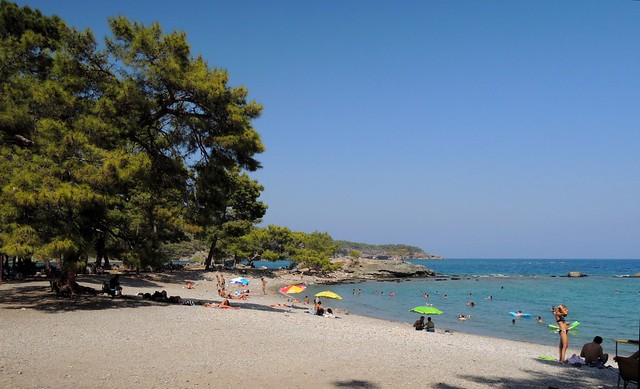 As I’m writing this up in rainy, cold Mexico City a good deal after the fact, I can’t help but feel sad and a bit bitter about the weekend.  After an off-and-on, up-and-down, 16-month roller coaster relationship with Ferda, this kayaking weekend was our last. 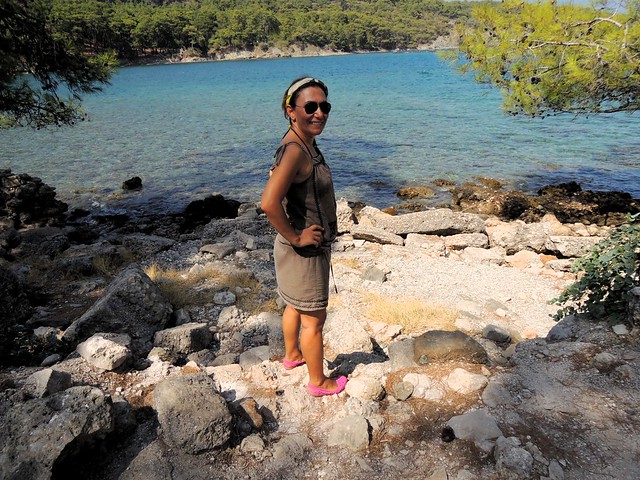 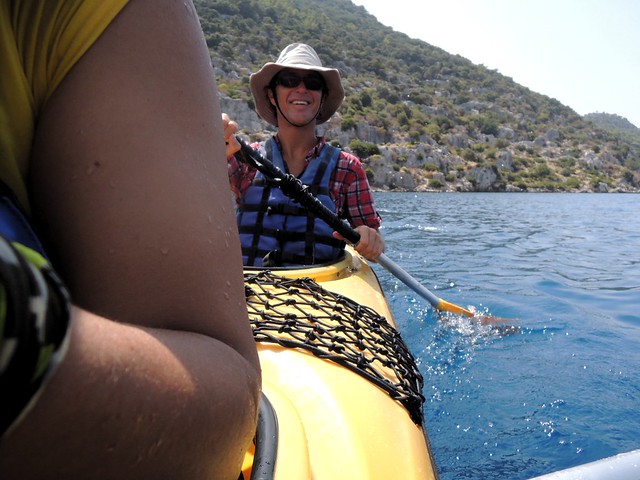 2 Responses to A short sea kayak tour in Kekova