Thanksgiving is my favorite holiday in the US.  Sure, a lot of turkeys are sacrificed, but it’s really all about a time to get together with friends and family and eat and drink and talk.  My first experience spending Kurban Bayramı with a Turkish family reminded me of US Thanksgiving.  Here, however, we give thanks for not being a sheep (or a goat or maybe even a cow).  Another difference is that there’s not as much as drinking in Turkey.  Indeed one friend told me that in his family they ate a chicken on Kurban Bayramı because they wanted to drink rakı with their holiday meal.

Chickens and rakı?  That probably needs some explanation.  Kurban Bayramı in English is Sacrifice Holiday or something like that.  It’s a religious holiday in origin celebrated 40 days after the end of Ramadan or something like that.  The animal (a sheep, goat, or cow) is sacrificed as an offering to Allah (I’m really going out on a limb here) and since Muslims aren’t supposed to drink alcohol, they’re particularly not supposed to drink alcohol with the sacrificed animal.  Following this logic (is there any logic to follow here at all?) if you want to drink alcohol with your animal, make it a chicken.  I suppose a pig would work just as well, but good luck finding a pig in Antalya.

I met Hatice in the morning at the covered pazar near her house.  I think it was her brother-in-law, Tuncay, or maybe her father who was at the pazar at 4am to get in line for the butcher.  They bargained for the sheep (one for Tuncay and one for Hatice’s father) and got tags 25 and 26, indicating the order for the butcher.  It was after 9am by the time the butchers were slitting the throats of our sheep.  The sacrifice is done with such little ceremony that I wonder why they bother.  Most of the Turks I know, including Hatice, think it’s a gruesome, out-dated practice sort of like what the Mexicans now think of bull-fighting.  Once again PETA wasn’t there. 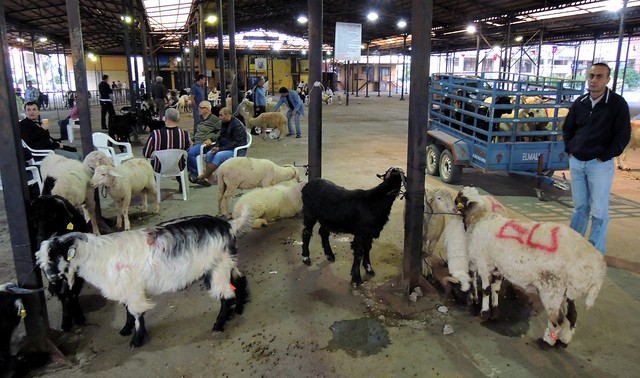 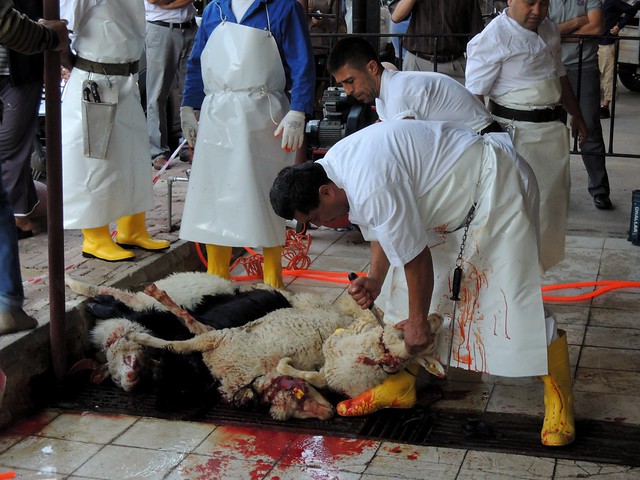 After the throats are slit, the butchers cut off the feet and remove some skin from the legs revealing a slit in the leg (between the tibia and fibula?) from which the animal is hung.  They skin the animals, remove the innards, and get to work on the butchering.  At this point the family collects the parts in bags and/or buckets and can request whatever special parts they want like the head, intestines, liver.  For her father Hatice requested the yumurta (eggs), two large oval-shaped parts.  It was a bit chaotic so I didn’t get clarification at the time and only later figured out that yumurta in this context meant testicles.  As I’m writing this up, I realize I never did get a chance to taste them. 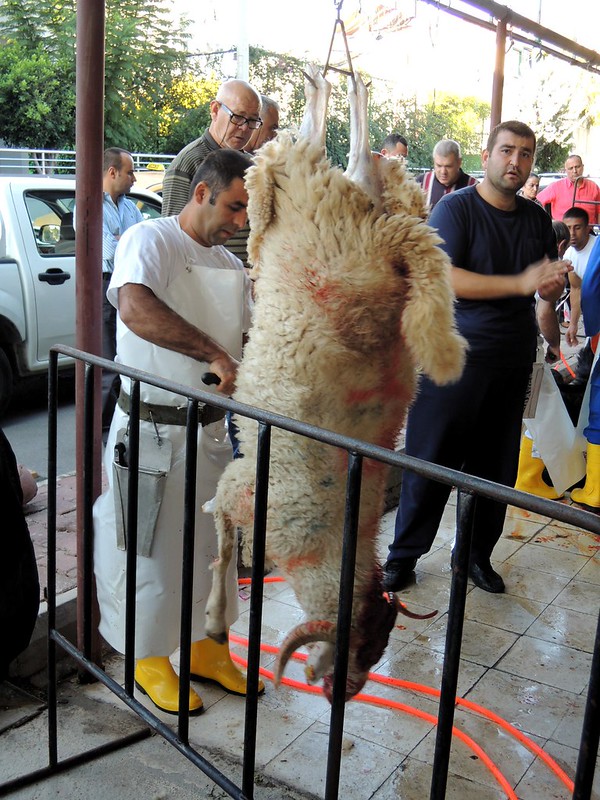 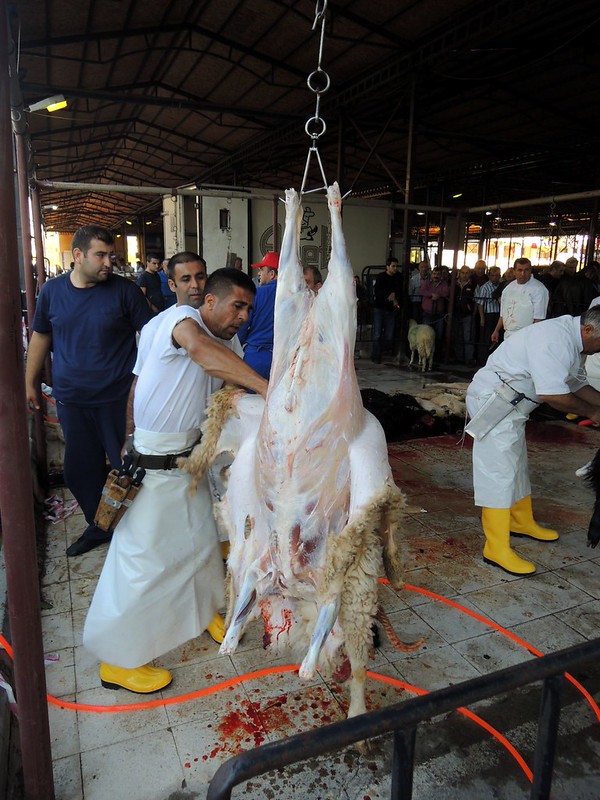 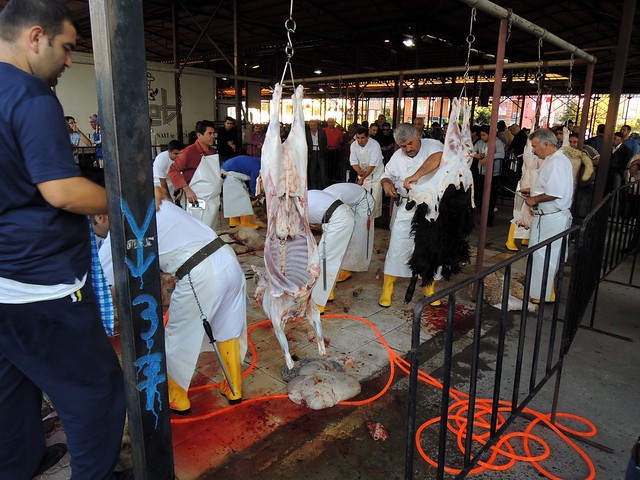 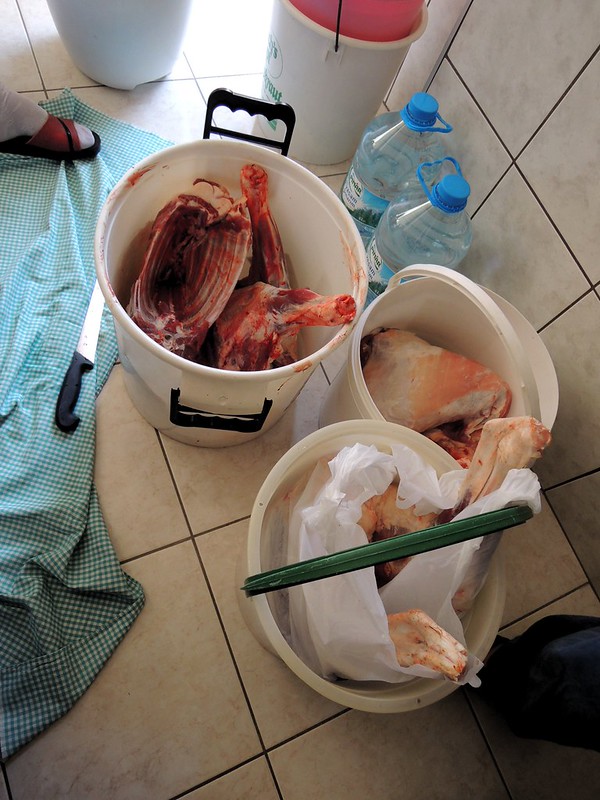 Back at the house Tuncay and his wife, Şenay, quickly started chopping and dicing away to get some fat and yummy meat for the Kurban Bayramı breakfast.  It was almost 11am, and everyone was hungry.  Hatice’s uncle was visiting from Belgium where he sometimes teaches Turkish so he’s used to talking clear, slow Turkish to foreigners.  It’s fun talking to people that like that every once in a while where I can actually understand most of what they say. 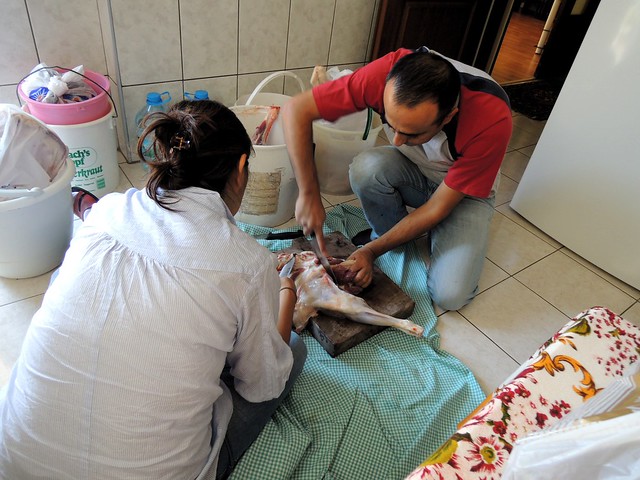 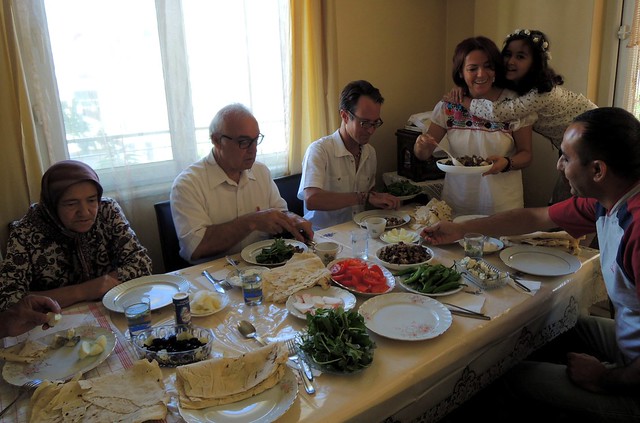 After our yummy breakfast some of us got out for a short walk along the coast where we enjoyed the brilliant weather and met some friends for coffee and backgammon at one of Antalya’s numerous cafes with brilliant views of the sea and the mountains.  Fun holiday and another new Turkish experience for me. 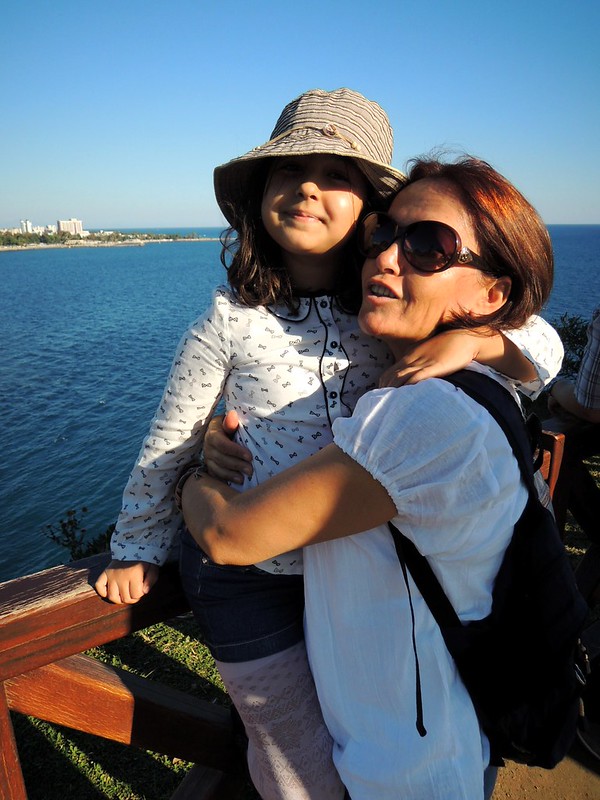 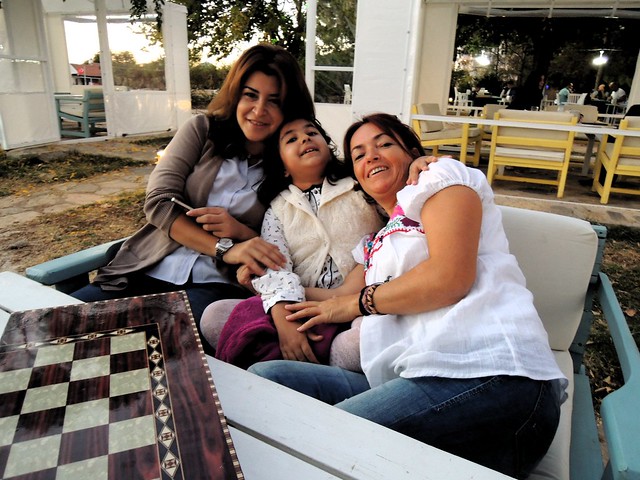 This entry was posted in Traveling, Turkey and tagged Antalya. Bookmark the permalink.