How does the Negev differ from the Judean Desert?  Well, most notable are the cultural differences.  Israel uses about 80% (or is it 90%?) of the Negev Desert for military training purposes.  What this means is that, except on weekends and holidays, most of the dirt tracks are off-limits to bicycle tourers.  Thankfully Passover’s a long holiday so I was able to get into some areas that would normally be difficult (life-threatening?) to access.  After the holiday I got used to seeing soldiers practising tank manoeuvres and going to sleep to the periodic staccato blasts of machine gun fire.

The other cultural difference is the Bedouins or rather lack thereof in the Negev.  Even though the Negev seems drier than the Judean Desert, the Bedouin used to herd their camels and goats in the Negev, but Israel has created national parks.  Apparently the military can use these areas for training, but the Bedouin aren’t allowed to stay.  The heavy military presence makes protesting this land grab a rather dangerous game.

Of interest to most tourists to the Negev are the makhtesh, usually translated into English as “crater” though these have nothing to do meteors or volcanoes. They’re kind of like what we might call box canyons in the US or perhaps similar to the mysterious Upheaval Dome in Canyonlands NP. 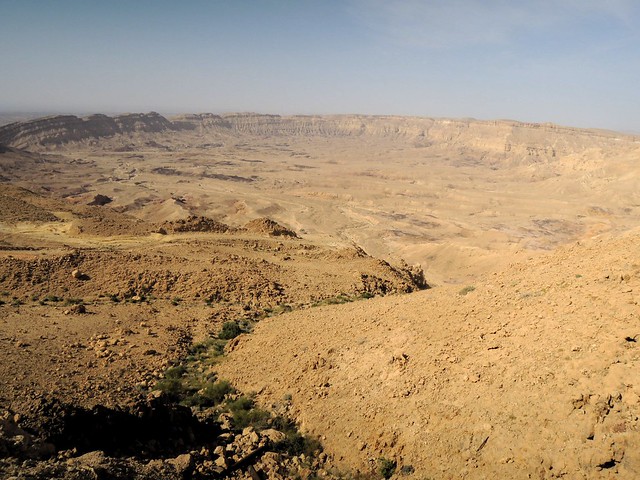 I got pinned down one night by a sandstorm in the Big Crater (Ha-Makhtesh Ha-Gadol) near an area called Colored Sands. 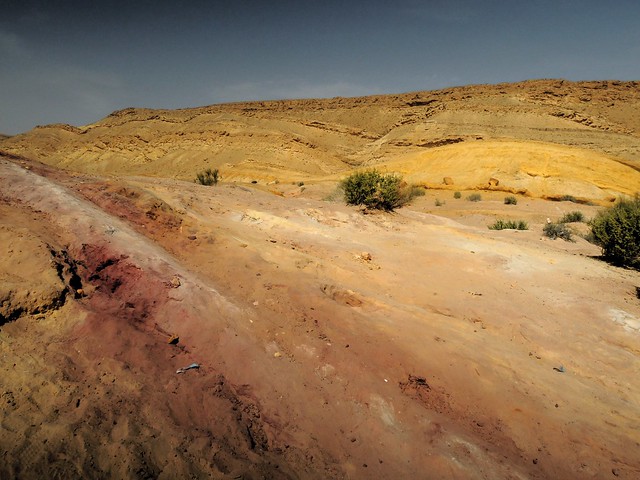 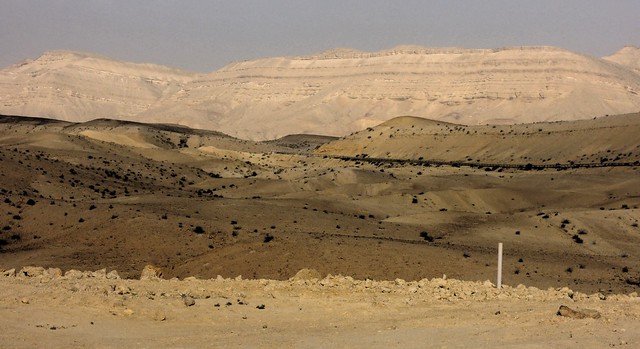 After the sandstorm I was excited to get to Yerukham where I could buy some supplies and rest up a little.  In the desperate, wrecked, lonesome industrial outskirts I ran into beautiful, young, friendly Russian Masha who directed me on to the grocery store.  After shopping I headed to the park to fill my water bottles and there ran into Masha again.  This time she left her grandfather on the bench and walked with me to the Russian market where I could buy what was unavailable (because of Passover) at the supermarket.  Along the way as we chatted, she guessed I was 27 years old.  As I recall, I showed great self-restraint by not giving her a big hug and kiss right there.  Incredibly I ran into her again on the streets of Eilat about 10 days later and proffered the overdue attention.

Unfortunately I have no photo of Masha.  Also inspiring was the scenery around Yerukham: 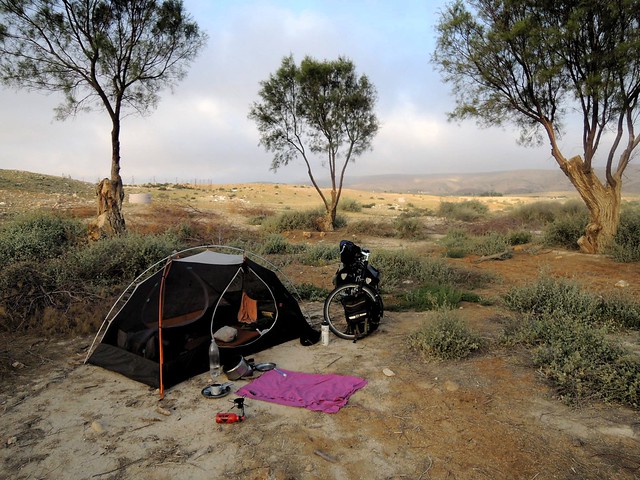 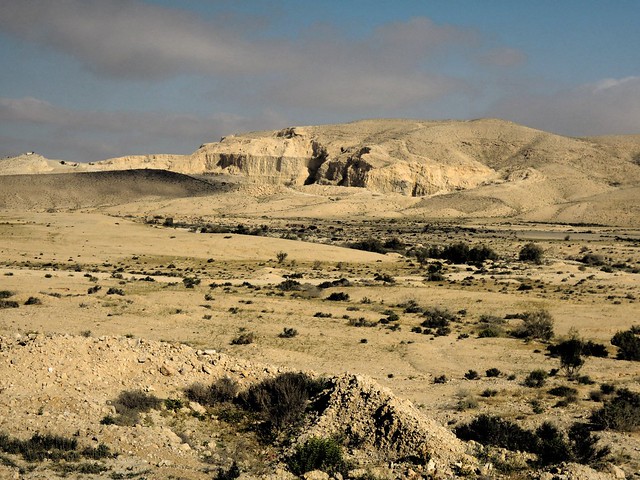 The most famous of the makhtesh is Makhtesh Ramon.  I decided to rest for a few days at the town on the edge of the makhtesh, Mitspe Ramon.  I found a super hostel called Green Backpackers and chatted with lots of fun people during my three-day rest.  I’ll mostly remember Diego, the only other atheist touring cyclist I met during my time in Israel, and Zoey, a well-travelled Australian who was volunteering at the hostel for about a month. 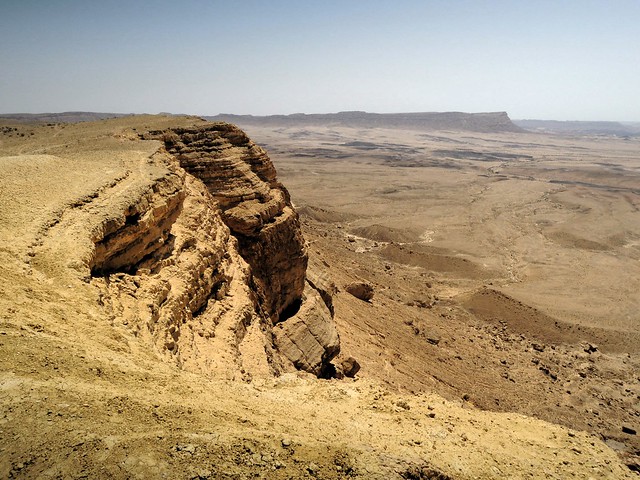 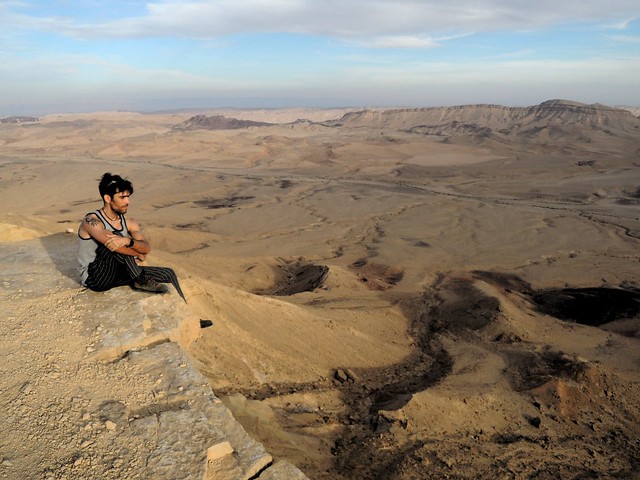 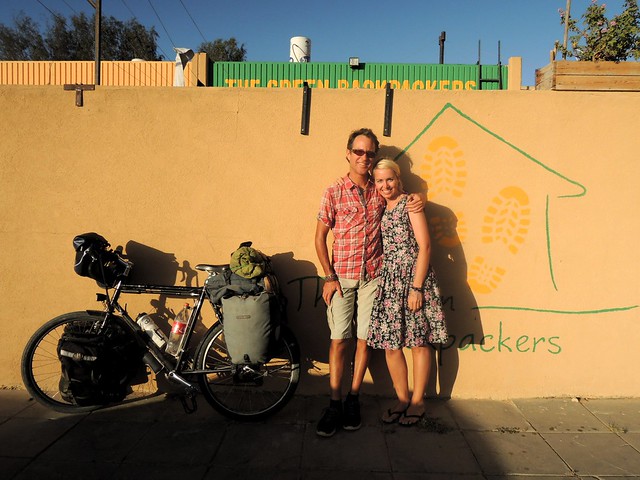 The Negev may be famous for the makhtesh, but for anyone with their own wheels and an affinity for Nabatean sites I recommend the Incense Route, a UNESCO World Heritage Site.  Shivta was the most-preserved site I visited, but I also made it to Mishkhor, Nekarot, Katsra, and Mo’a.  The most famous Nabatean site is, of course, Petra in Jordan which Julie and I visited in 1998. 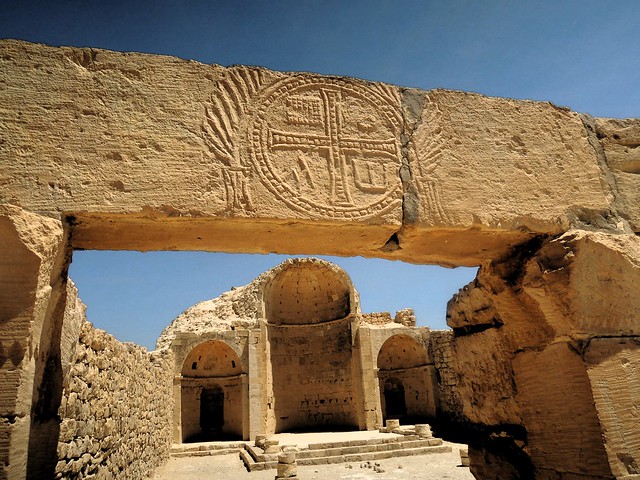 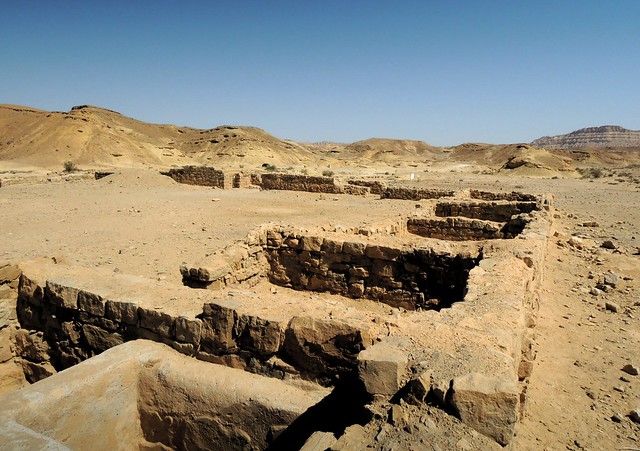 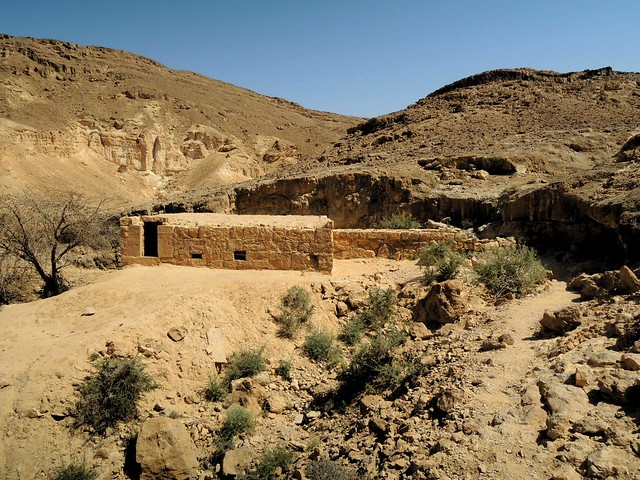 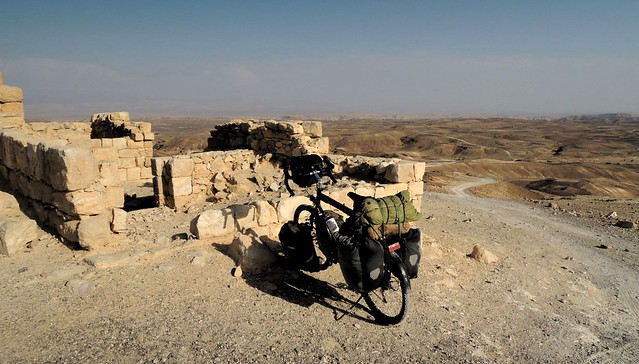 The Incense Route is essentially a series of caravansarais, one day’s camel walk distance apart, offering refuge, food, and water to merchants along this trading route 2000 years ago.  In my opinion the most incredible thing about these sites is (with the exception of Mo’a) their lack of springs.  The Nabateans were experts at capturing and storing the scant rainwater.  Around Shivta they raised crops and even had two grape presses (the photo shows one of them) for making wine in an outpost that never had more than 2000 people. 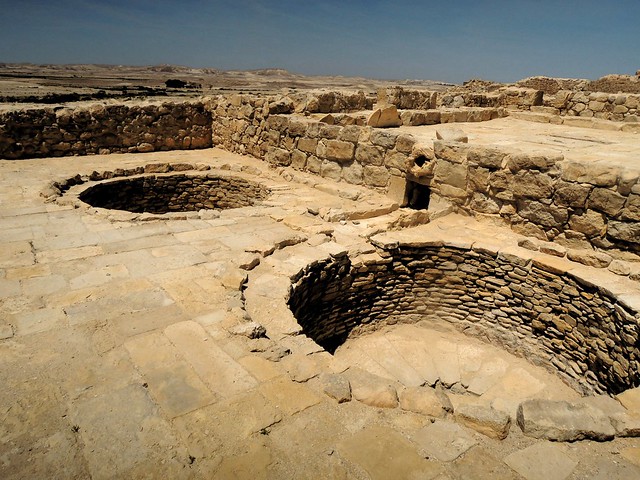 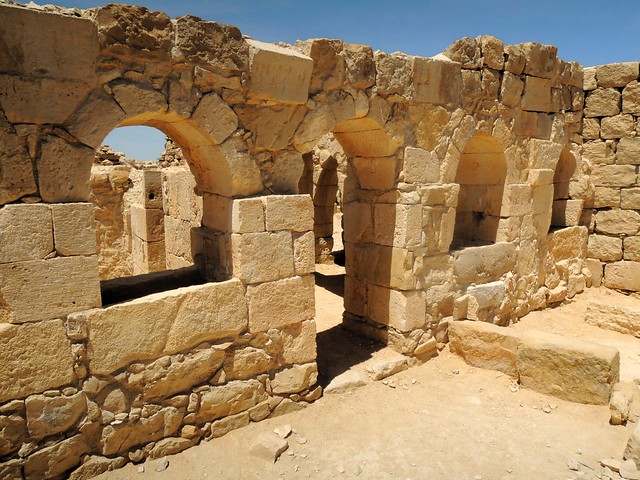 Of course the logical place to end a southward tour of Israel’s Negev is at Eilat on the Red Sea.  When Julie and I were in Aqaba (in Jordan, just across the border from Eilat), we cycled out to the Saudi Arabia border for the best reefs.  In Eilat the thing to do is head toward the border with Egypt.  I spent two days underwater gawking at the variety of coral and colourful fish.  However, just as I remember from the Red Sea in Egypt and Jordan, dang, the water’s cold.  Air temperature was 39°C when I was in Eilat, but I wished I had a wetsuit. 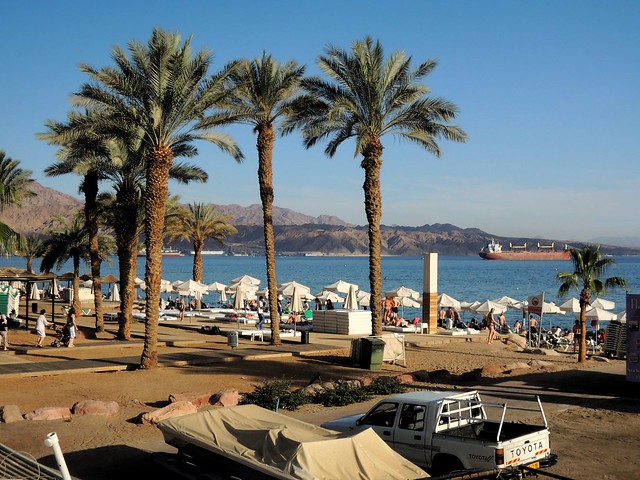 And some photos, of some of the days with Shimshon, and, uh, desert… 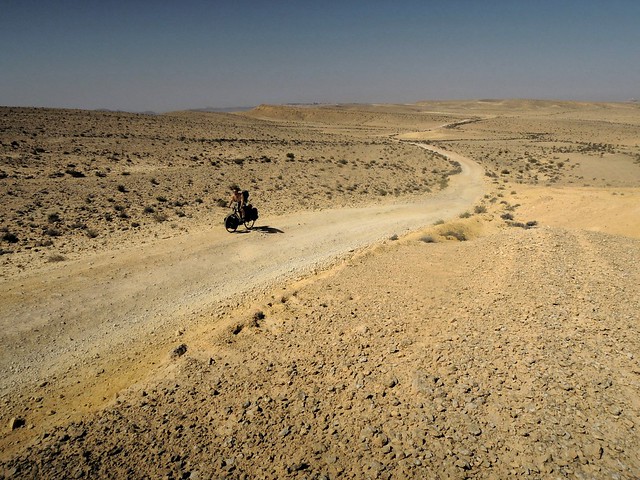 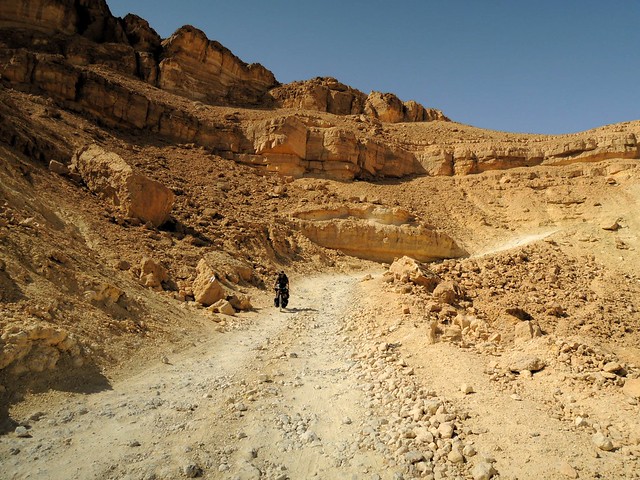 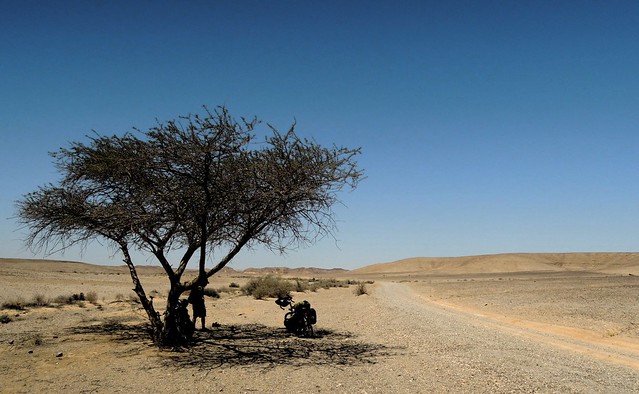 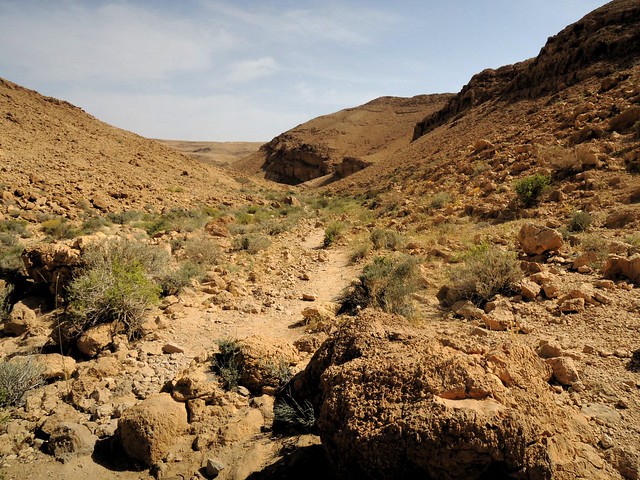 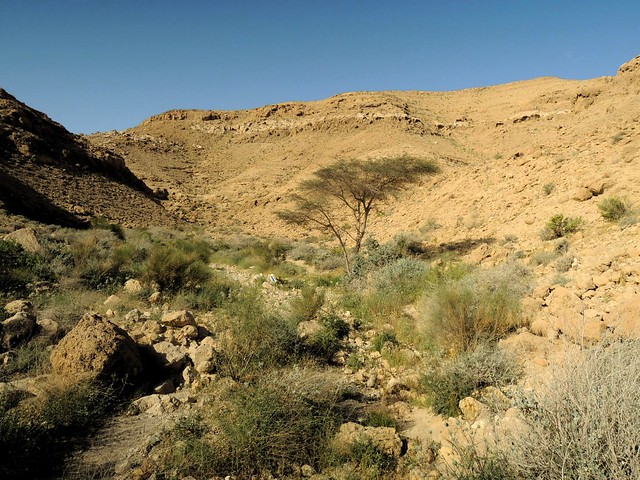 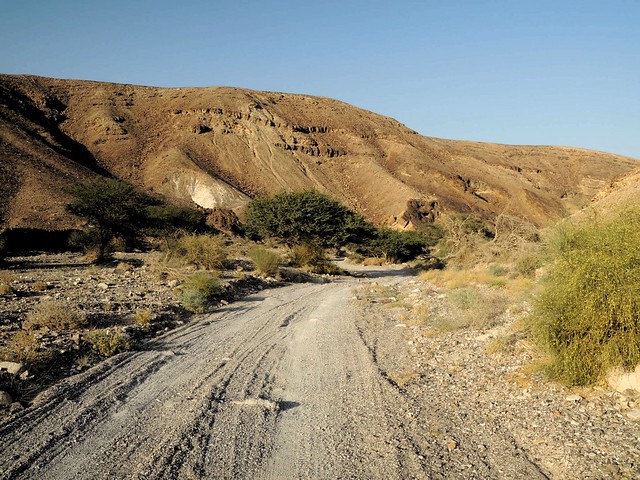 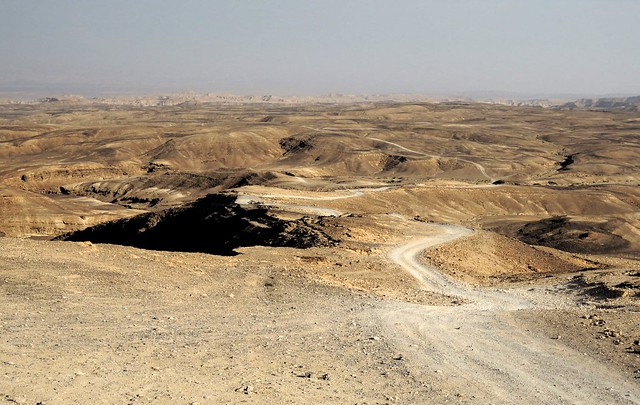