A sea kayaking day from Olimpos to Adrasan

If you compare the photos of my first sea kayaking tour in Turkey (three years ago) with the photos from the second tour (last weekend), the first thing you’ll notice is that this time we had red sea kayaks instead of yellow ones.  Wow; big, colorful plastic toys with the vegetation, rocks, and blue water makes for some nice photos. 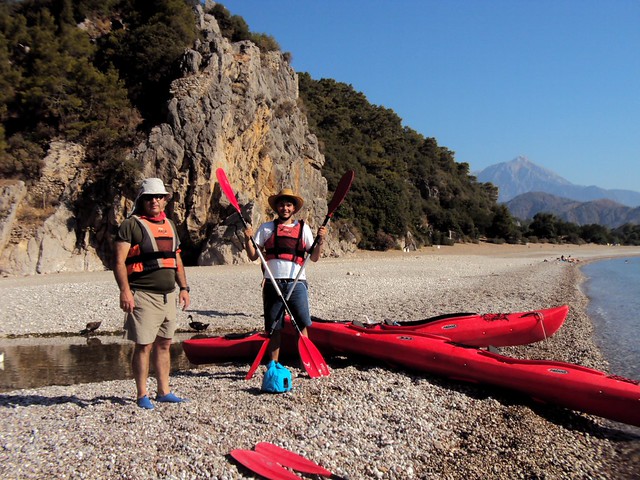 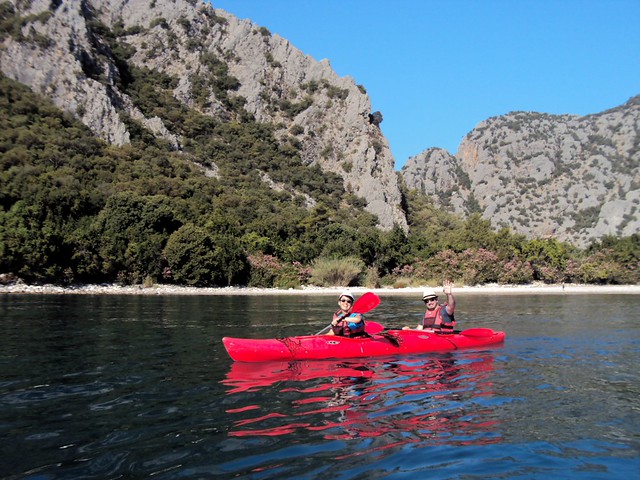 Last weekend’s sea kayak tour was different in just about every other aspect as well.  This time Yıldırım in Çıralı had no problem letting the kayaks without a guide.  In fact, I think that’s standard procedure in Olimpos and Çıralı (quite unlike Üçağız where it’s actually forbidden).  So we organized a small group and decided to paddle the stretch between Olimpos and Adrasan.  I’ve heard that this stretch of coast is the best in the Antalya region for boat tours — pretty views and some secluded bays with clean beaches for swimming.  Indeed that’s exactly what we found.  The water is incredibly clear, but Bilge was the only one smart enough to bring a mask. 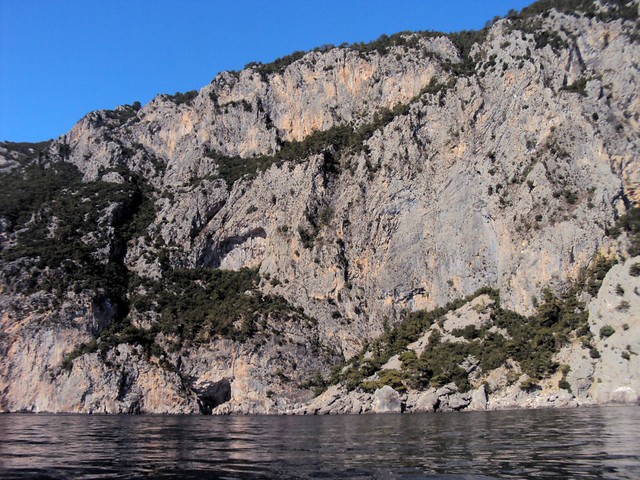 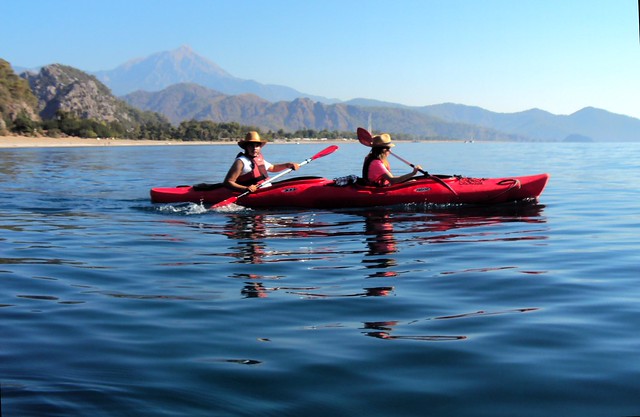 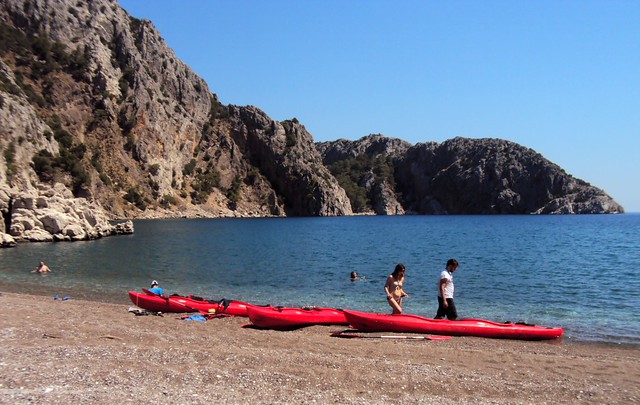 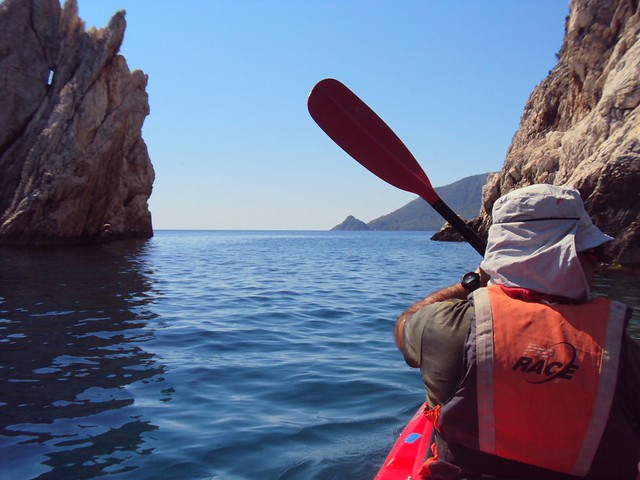 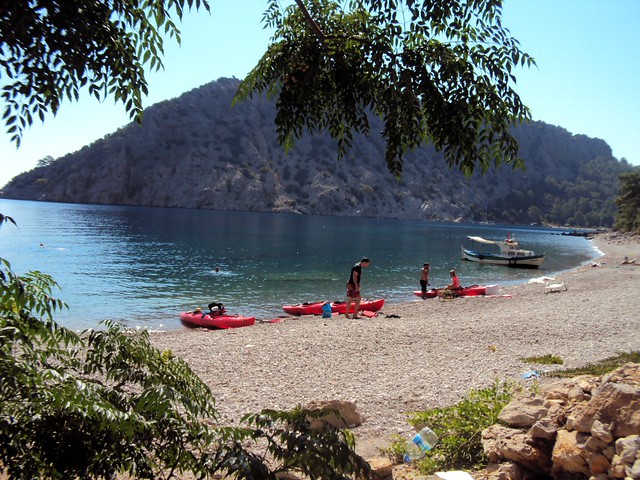 There are also quite a few possibilities for deep water soloing along the cliffs here, and we even paddled past Yarasalı, the only deep water soloing destination mentioned in my rock climbing guide of the Antalya region.  None of us brought rock shoes.  Here’s the bolted wall at Cennet (as viewed from the water) where I’ve climbed a few times: 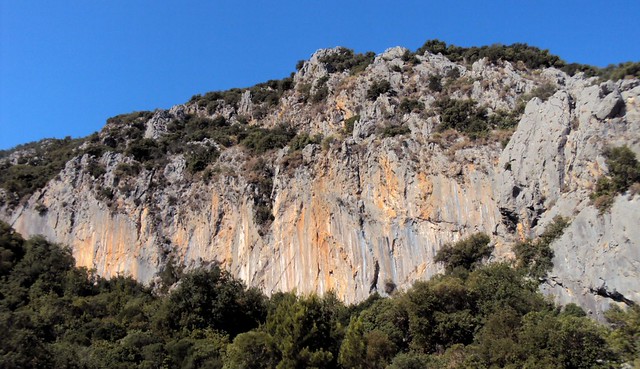 We were six people in three tandem kayaks: Bilge and Emra, Yasemin and Erhan, and Ahmet and me.  Ferda was supposed to come as well, but she wasn’t feeling well and instead drove the cars around to Adrasan with Güneş.  That was a good call on her part as the paddle was a bit harder than any of us expected, mostly because of the intense heat and sun.  Even though it only took us about five hours to complete the tour, I must say we did it very quickly to avoid the worst heat and sun of the day.  It would have been more enjoyable to take our time. 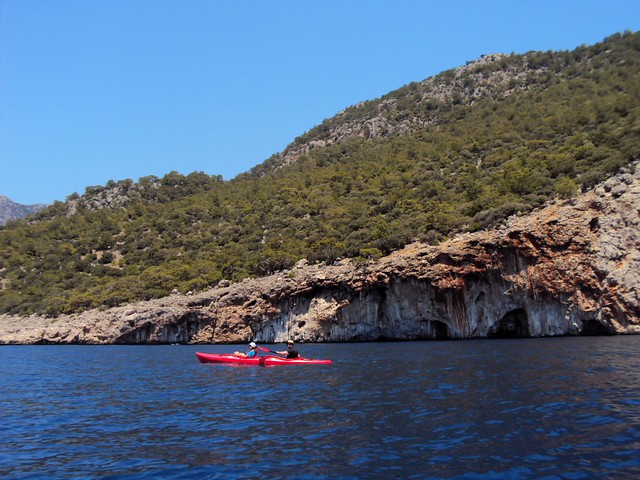 This would be a terrific tour to do in the fall.  Spring’s good too, but the water’s much warmer for swimming in the fall.  Both Ceneviz Koyu and Sazak Koyu would be great places to pitch a tent and spend the night.  Both have fresh water.  And certainly continuing on from Adrasan to Karaöz around the Gelidonya Peninsula (or whatever it’s called) looks super on the map.  I’d like to come back for a multi-day sea kayak tour.  At our stop at the beach in Sazak Koyu I was surprised to meet another sea kayaker.  I didn’t catch his name (facebook page: kürek kürek türkiye), but this guy had spent five months paddling from İzmir and is continuing on to İskenderun.  I love it that people do stuff like that!

I didn’t get a photo of kürek kürek türkiye, but here’s his kit: 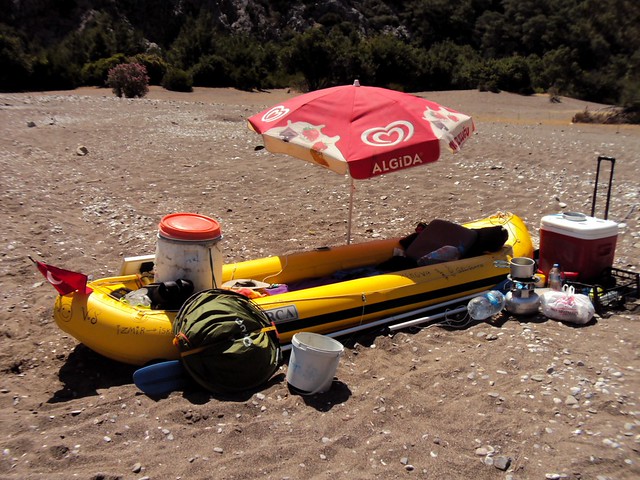