Fall colors in the mountains east of Antalya

My third short bicycle tour of 2016.  Just like the other two, I again went into the mountains near Antalya, but this time I went east instead of west.  I had been east a couple times to Gündoğmuş by car, but I hadn’t cycled east of Antalya before.  I knew it was beautiful, and I even sent a warmshowers.org guest, Pedro from Spain, up over Gökbel Pass, the only route I know of to continue heading east from Gündoğmuş.  He told me it was great but so steep that he had to push his bike in places.  Yikes, Pedro was right.  Those last few kms from Soğukpınar to the top of the pass were absurdly steep. 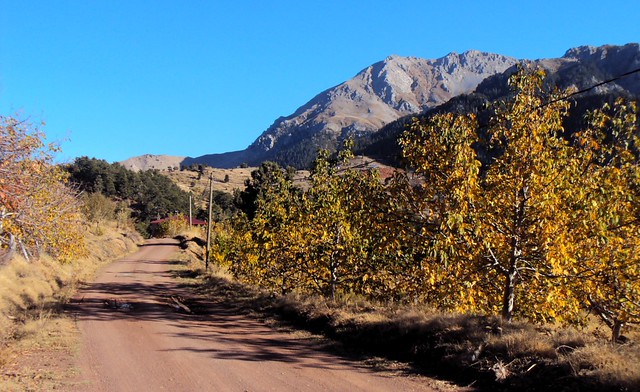 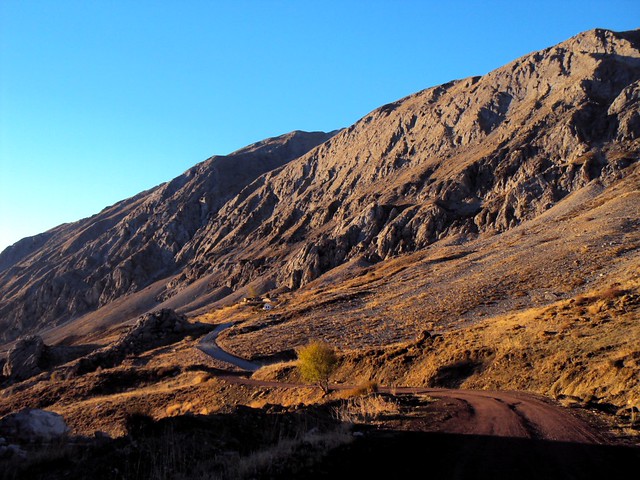 I left Antalya November 1st on a beautiful day.  The rather windy weather was particularly beautiful if you wanted to go east.  A friend told me of a new bridge between Kundu and Belek, allowing one to cycle all the way to Serik without getting on the main highway.  Once there I just kept on going.  Taking advantage of the strong tailwind, I never stopped for long, and I completed the entire flat (boring, highway) section the first day, getting all the way to Okurcalar.

Then it was six days in the mountains, climbing over 9000m.  Wow, that’s averaging over 1500m/day.  Of course, I didn’t learn this till I got back and put the route into gpsies.com  It did seem like I was always climbing or descending, but still the 9000m surprised me.  It ended up being a week of nice fall colors and beautiful mountain views.  Seems like those mountain views are a typical theme of my touring this year. 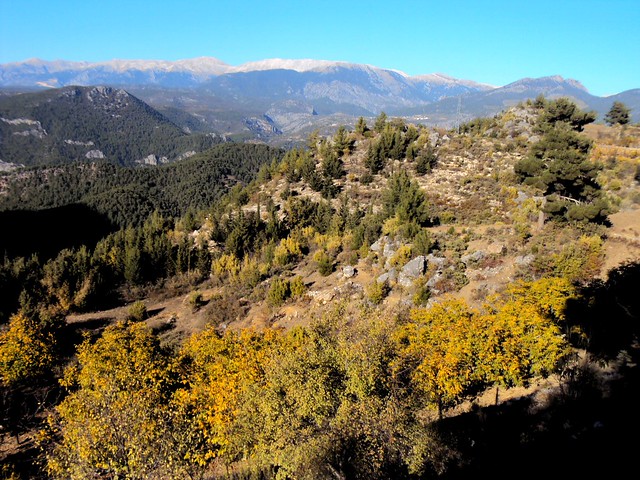 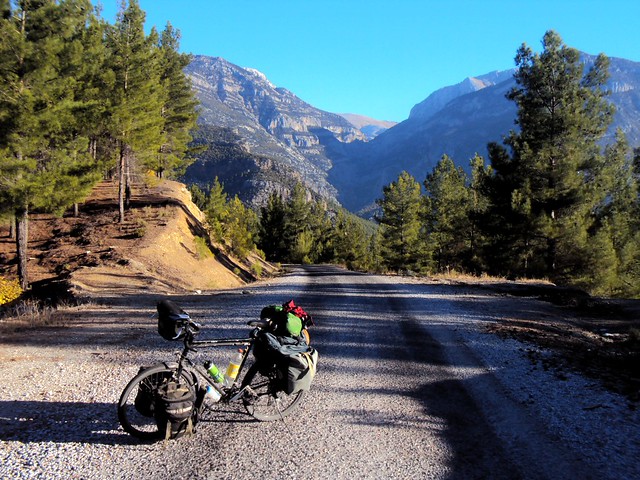 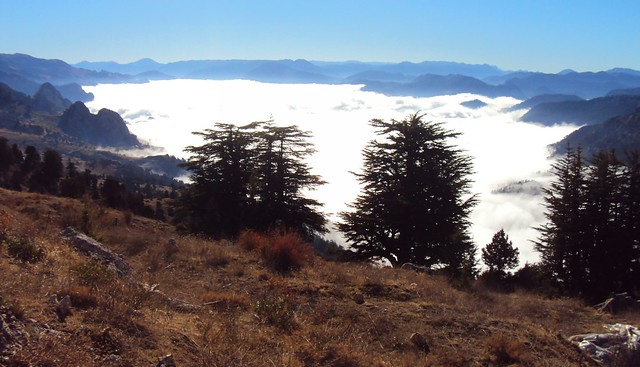 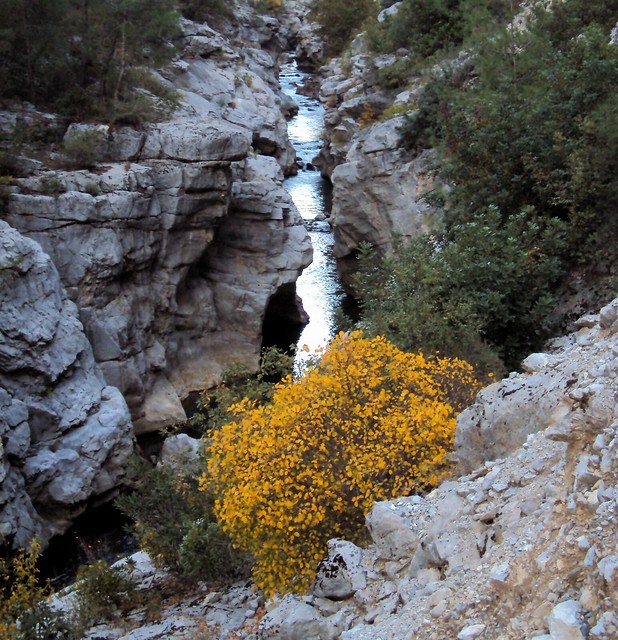 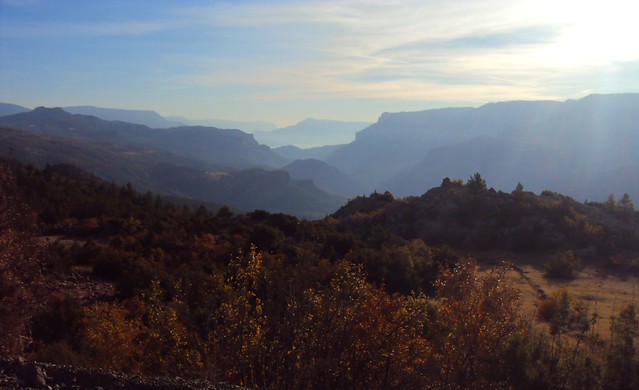 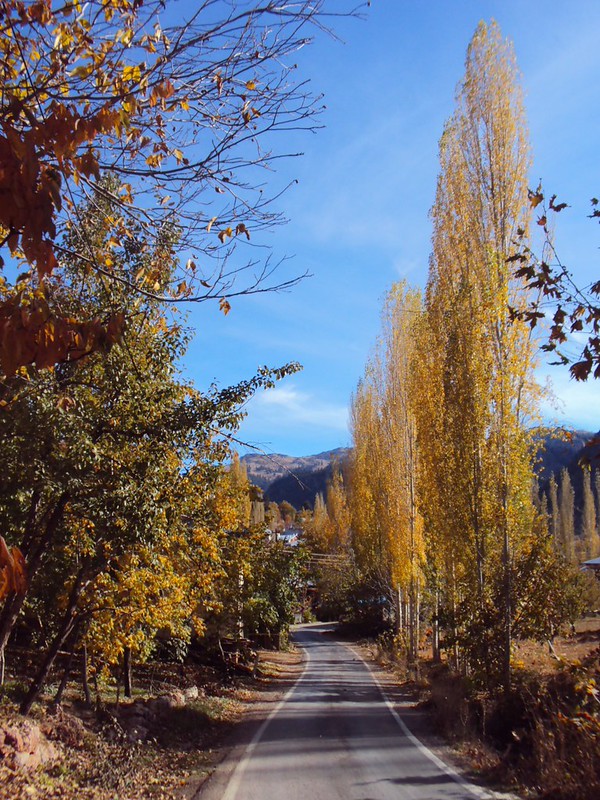 In many villages I met friendly folks who gave me so many pomegranates and apples that I think I ate two of each every day and never bought any.  Certainly no one would buy apples up there.  They were everywhere, often rotting on the ground and seemingly free for taking right from the trees.  Apples are going for 1.5tl/kg in Antalya now.  How many kilos would you need to carry just to pay for the fuel there and back, I wonder?  It’s no wonder no one bothers to pick them. 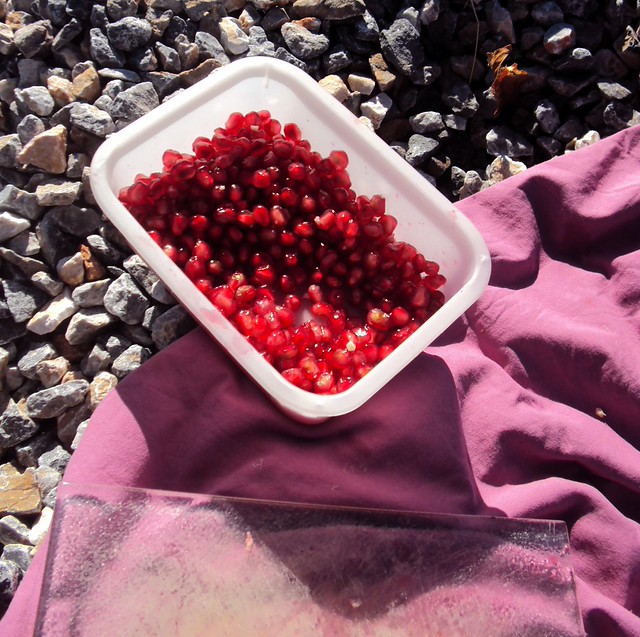 Near the top of the pass between Çayarası and Civandere, I saw what looked like a huge field of potatoes from the road.  How strange, I thought, so I stopped to look.  There a man, working for the forest service, was watering pine cones.  Every year the forest service pays the villagers to collect pine cones (1.25tl/kg this year).  In this field the pine cones are spread out, watered, and allowed to germinate (?).  Then they’re used as seeding for reforestation.  Wow, I’d never seen anything like that before.  Is that the same way it’s done in North America? 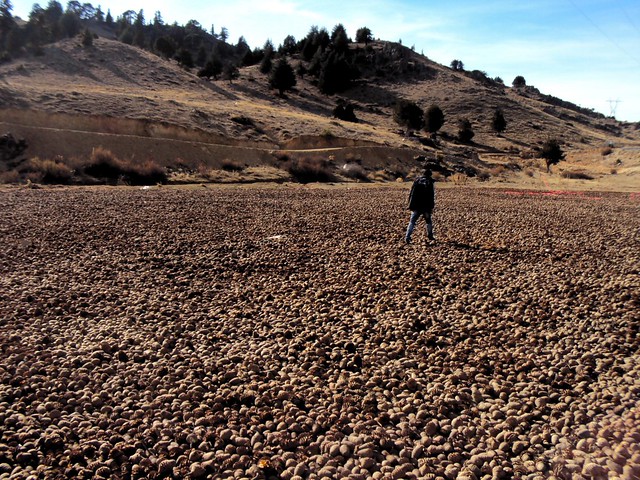 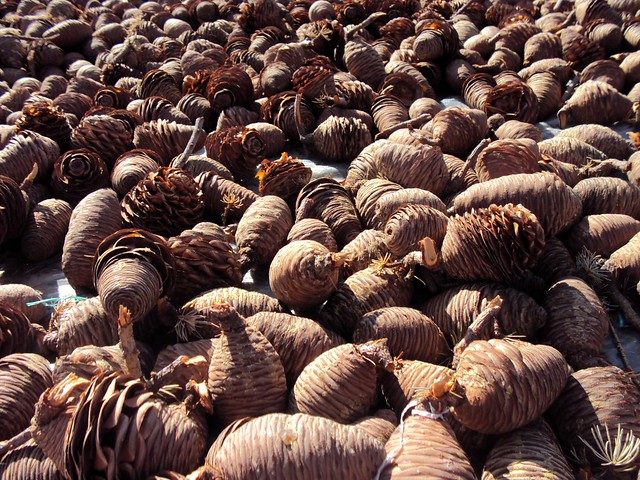 Reading over my notes, it seems like every day I was amazed again and again by how great the bicycle touring is in Turkey.  The small roads, curving through the mountains with very little traffic, incredible views, old villages that take you back in time.  Of course, people still daily struggle in these villages, mostly old people since youth escapes to the cities.  I had just passed the village of Yerbağı, preparing another pomegranate in a picnic shelter while enjoying the view of the canyon below, when two old men and an old woman joined me.  Slowly I learned the story of Yerbağı.  Seems like things have gone to hell since coal miners dug under the village.  As a result of the mining, the water table fell, leaving many wells dry, and the subsidence was so bad that it’s damaged many of the houses.  Most young people have left, and even the old folks are now following them to the cities — a village being abandoned. 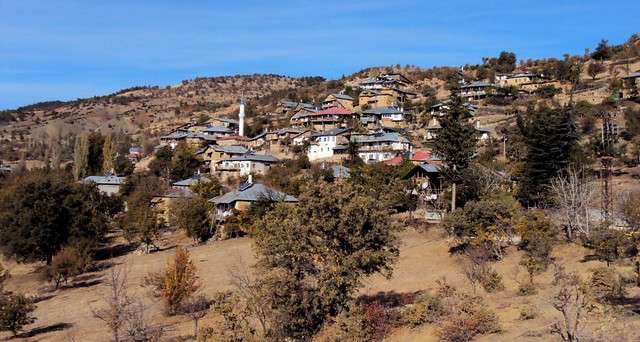 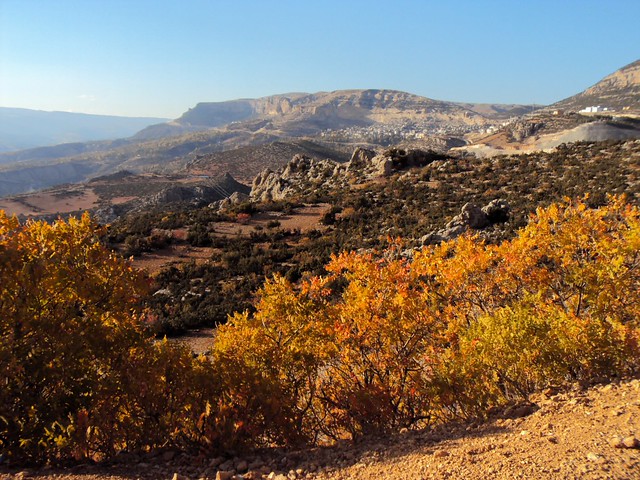 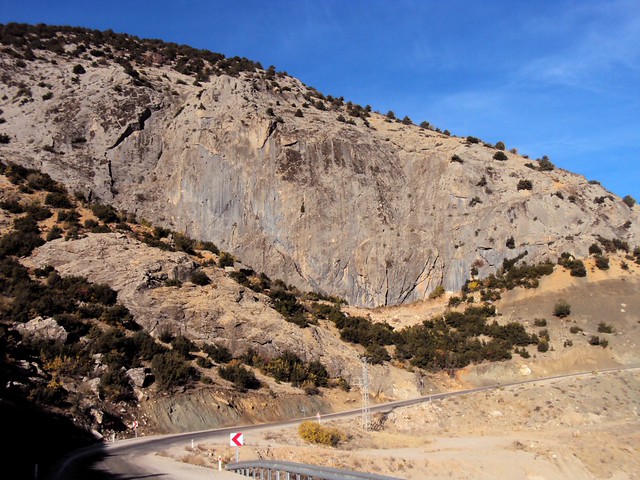 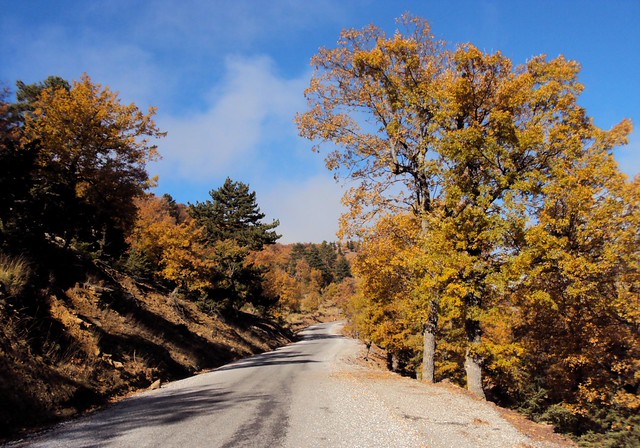 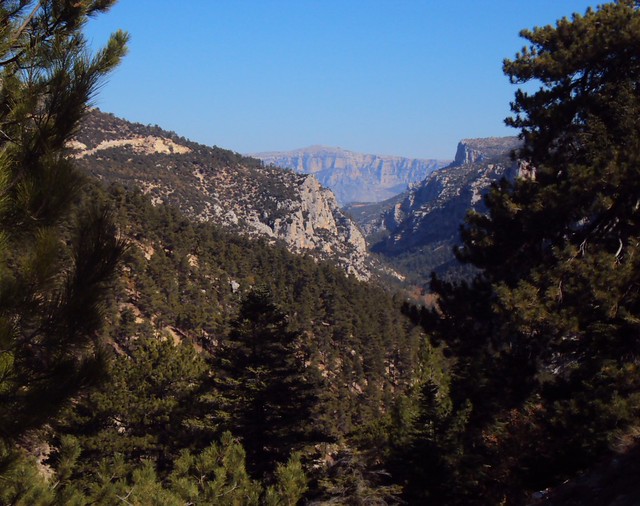 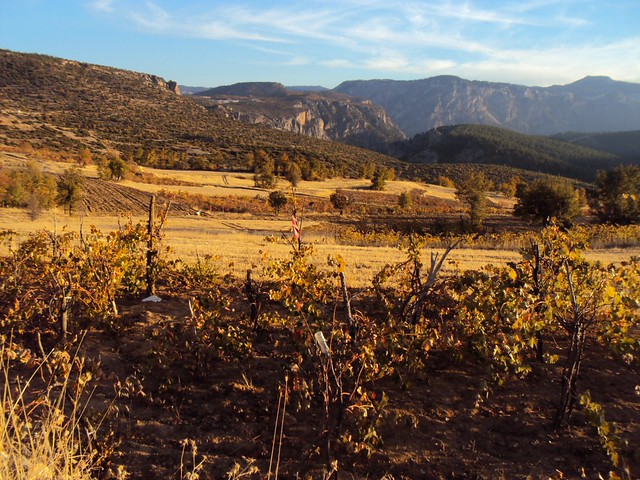 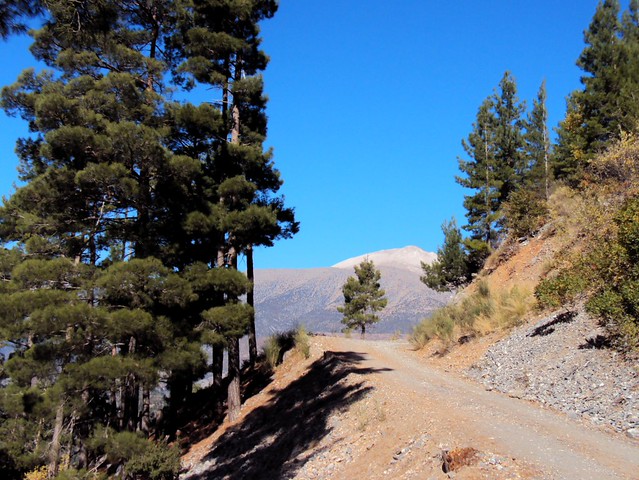 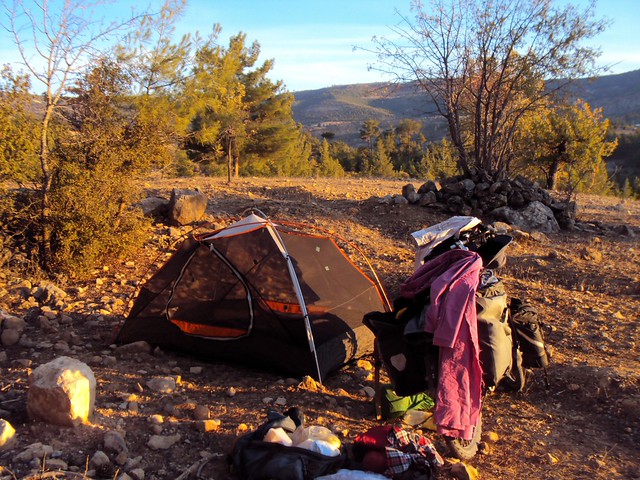 But the worst story I heard was on the bus back to Antalya from Anamur where I ended my tour.  Across from me was a Syrian couple, a man my age with a young wife and a baby.  He used to have two houses and four restaurants in Aleppo, all destroyed by bombs.  He lost a child as well.  He recently started over in Alanya.

I’ll try to end on a more positive note.  Typical for me, I found another incredible Roman ruin, Anemourion.  Ever since Antje raved about Anemourion when she visited a couple years ago, I’ve wanted to go.  Situated on Anatolia’s southernmost point jutting into the Mediterranean, Anamourion has one of the best preserved Roman necropoleis (anywhere?) and the best preserved Odeon in Anatolia, according to the signs there.  I loved wandering around the site and even in November wished I had brought my swimsuit (it was a little too crowded to go without one). 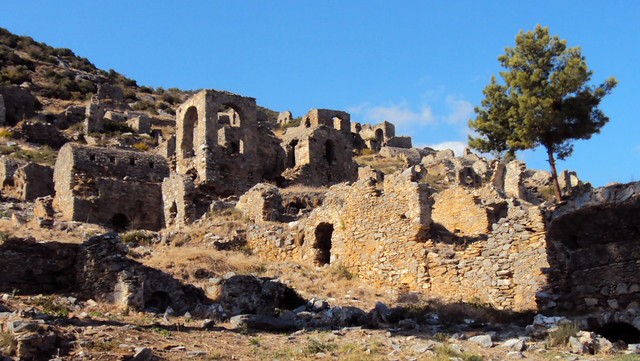 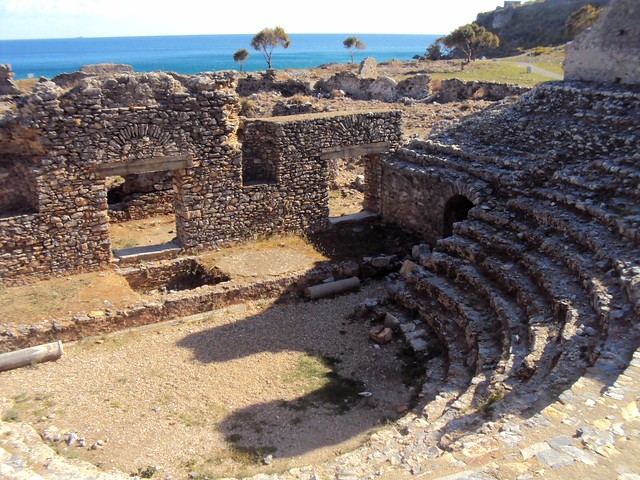 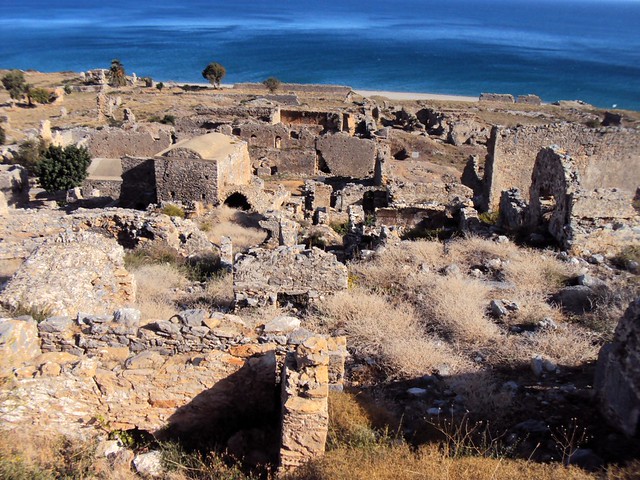 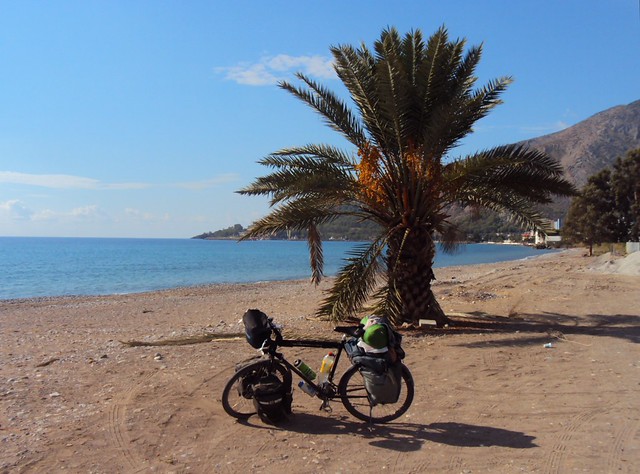 3 Responses to Fall colors in the mountains east of Antalya