Treasures near Madrid, or how 100km of cycle touring takes a week

Bicycle touring Spain, finally!  I’ve wanted to go to Spain for years.  I have Kurt to thank for making it happen this year.  When he was in Antalya last fall, he suggested a one-month tour from to Lisbon to Barcelona.  I managed to convince him that going from Madrid to Barcelona in one month was enough.  So we flew to Madrid, met at the airport, and started riding from there. 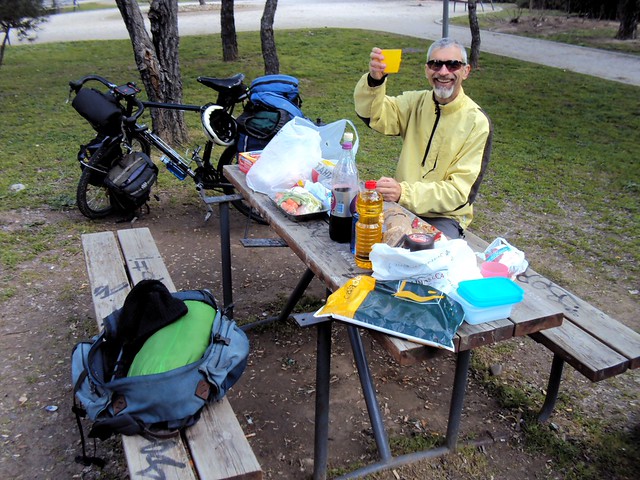 Third (after Italy and China) in the number of UNESCO World Heritage Sites, Spain is full of treasures.  With so many things to see in and around Madrid, it took us a week to pedal the first 100 kms of our tour!  And that was without visiting Toledo and Ávila, two other nearby cities that are supposed to be great.  In that week we visited Madrid, El Escorial, La Granja, and Segovia.

On our first day in Spain we went to one of the world’s great art museums: Museo del Prado.  We headed straight for Hieronymus Bosch’s Garden of Earthly Delights and spent a good half an hour enjoying his crazy delights.  Antje gave Ferda and me a fun introduction to Bosch (El Bosco in Spanish) when we were in Berlin in January, and Kurt was keen to see some of his works for the first time.  One thing Antje didn’t let us look at in Berlin was Rubens because she’s not a fan so I was sure to check out The Three Graces at the Prado.

The next day we visited another fabulous art museum, Reina Sofia.  There we headed straight for Picasso’s famous Guernica.  After a few more Picassos we got stuck on this surrealist work by Salador Dalí: 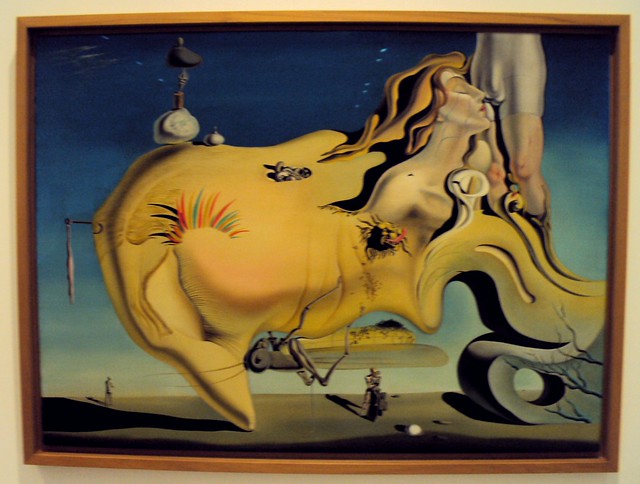 We were talking about how it was oddly sexual.  Kurt kept finding breasts, and I thought even the grasshopper was sexual.  Only later did we read title: The Great Masturbator!

In addition to art museums we walked through Madrid in the cool, partly sunny, partly rainy weather.  Here’s the Plaza Mayor: 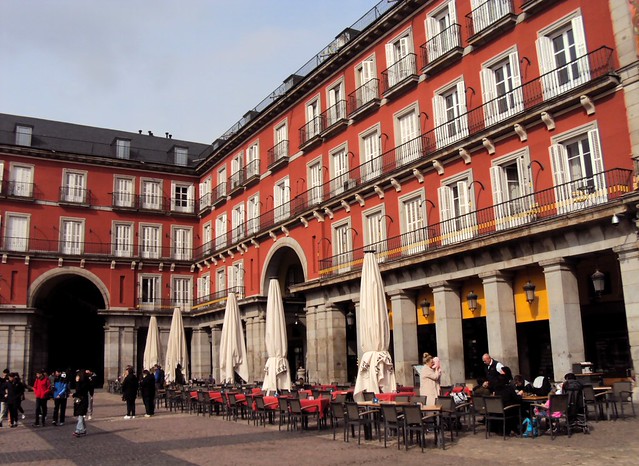 and there are even colorful frescoes on the outside of buildings: 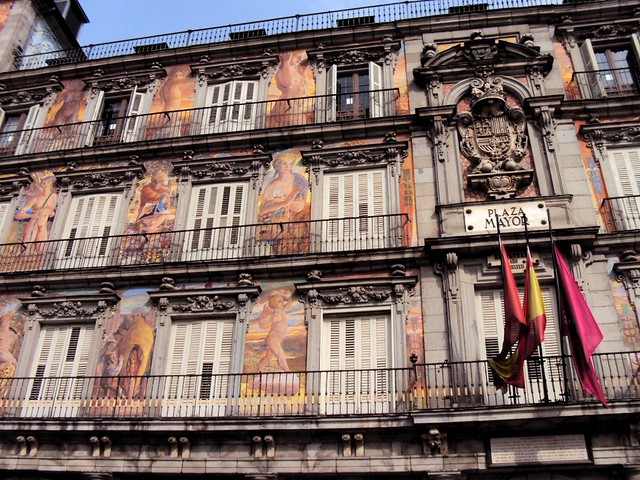 The crypt near Madrid’s cathedral reminded me of the cisterns in Istanbul: 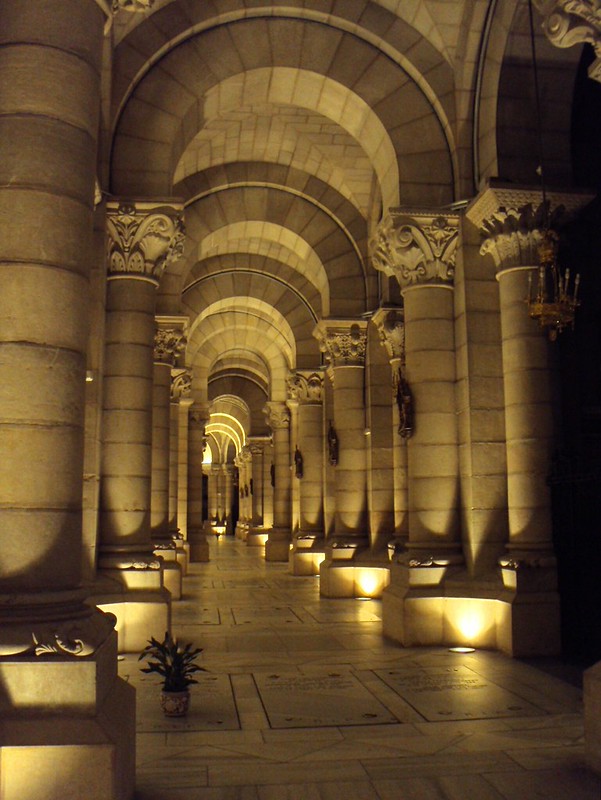 We biked out of Madrid in fairly dry weather one afternoon, and the next day we were already in El Escorial, one of the best museums I’ve ever been to.  If you go, get there early and plan on spending all day.  We spent about five hours and could have spent longer (for comparison we spent about two hours each at Prado and Reina Sofia).  The library alone is worth the 10 Euro entrance fee and the UNESCO World Heritage Site status.  It’s full of old books, the ceiling is covered with colorful frescoes sometimes compared (by those who haven’t been there?!) to those at the Sistine Chapel, and there’s an armillary sphere, an incredible complicated spherical model that attempts to show the orbit of celestial bodies in an earth-centric universe.  We couldn’t take photos, but I have a postcard.

The list goes on and on at El Escorial: a number of Hieronymus Bosch paintings but without the crowds of the Prado, a basilica as amazing as any we saw in Spain, beautiful carved wooden doors, an extensive map collection, a polished stone crypt full of dead Spanish kings.  One wing of the palace was full of tapestries depicting parties, picnics, dancing, drinking, hunting scenes.  One corridor, “The Hall of Battles”, contains an ~80m (?) long mural showing a battle between Spain and Muslims in Andalucia, full of scenes taken straight from the battle scenes in Game of Thrones.  Seriously, this place is incredible.

My photos are only from the outside since we weren’t allowed to take photos inside: 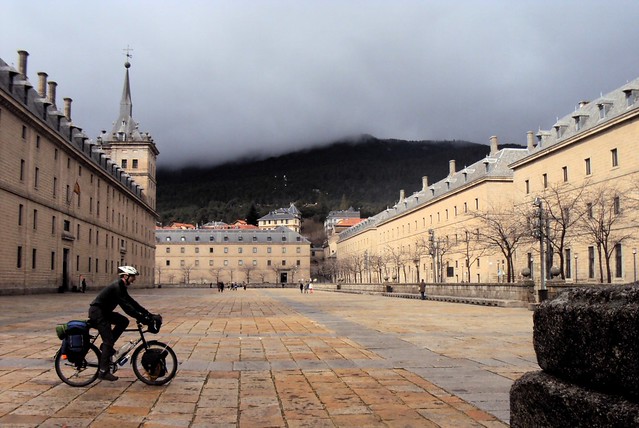 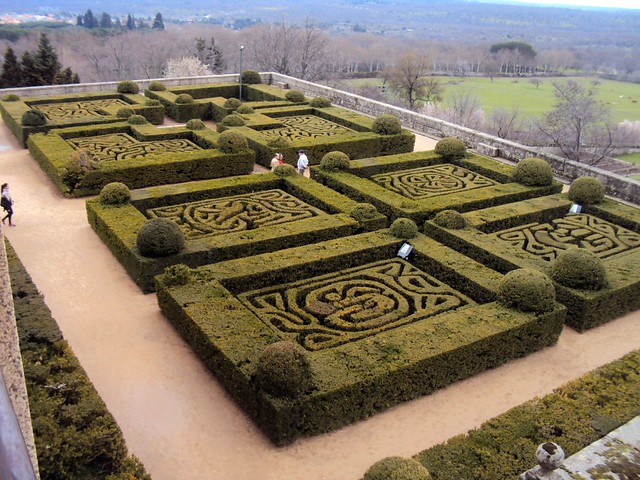 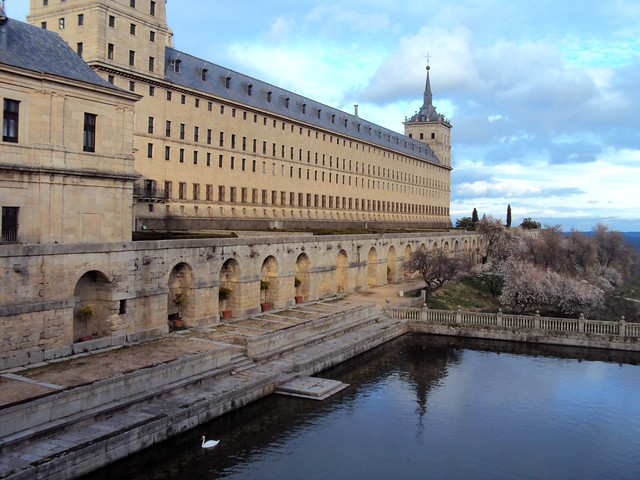 After another short day of riding (though we did climb the 1860m Puerto de Navacerrada and ate a good lunch at the ski lodge), we were at the royal gardens at La Granja, next to a cute village of the same name.  They’re sometimes compared to the gardens at Versailles (probably by those who haven’t been there).  March is sort of the off season, but we enjoyed walking around and getting a feel for the place. 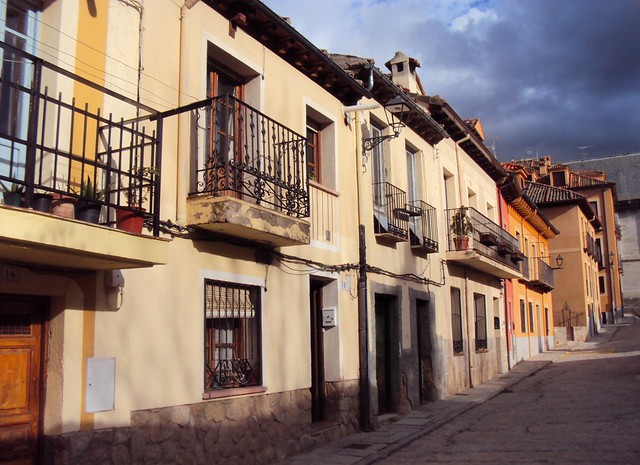 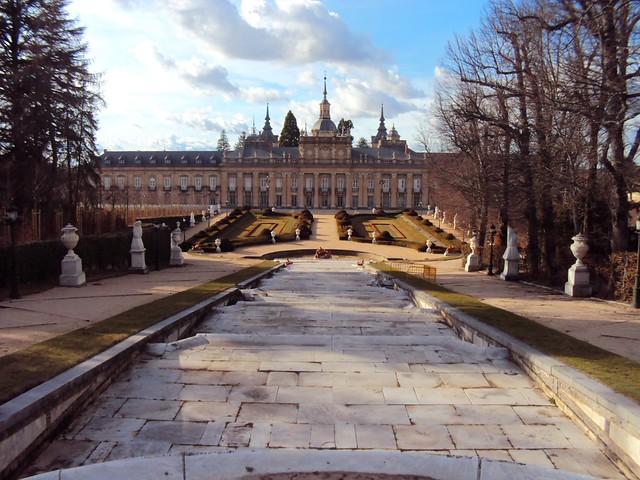 Once again, another short day of riding to another of Spain’s treasures (also recognized by UNESCO): Segovia.  Uh, wow, here’s the panorama we were treated to when we descended into the center of the city:

It’s a triple bonus in Segovia: the aqueduct, the cathedral, and Alcázar, a palace. 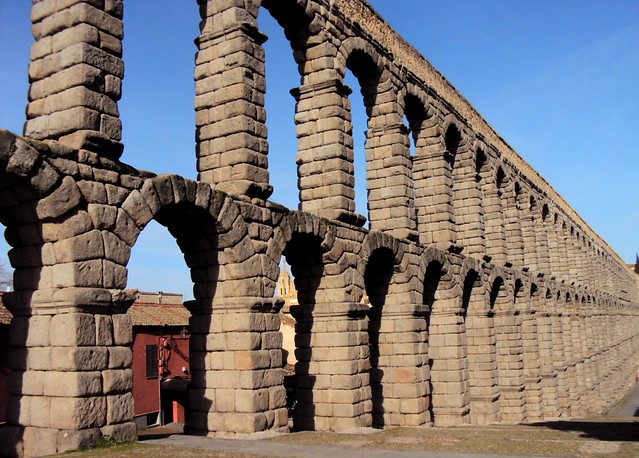 This church is not the cathedral: 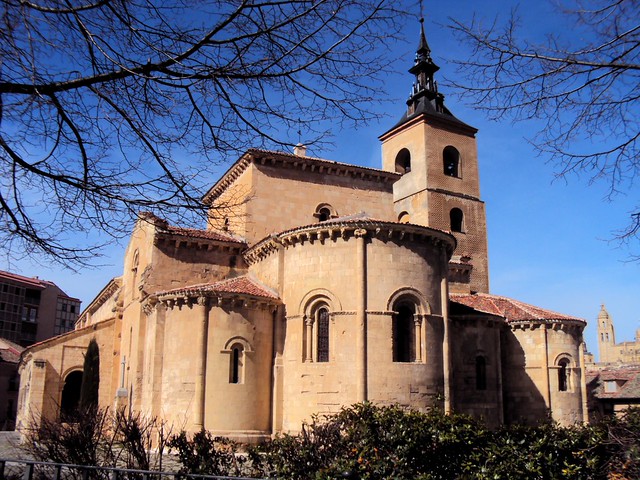 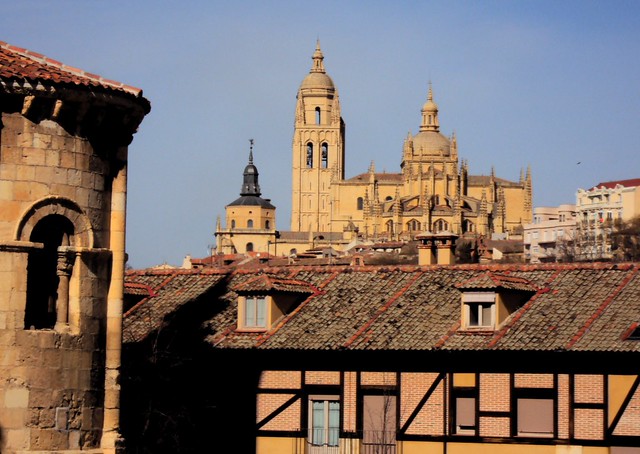 The cathedral is really a museum (there’s an entrance fee) with a few places to pray — over a dozen altars, many gold, lots of religious art.  I pointed out to Kurt that people visit Puebla (Mexico) to see the incredibly rich churches with the gold altars and religious art.  When you go to Puebla, you visit four to six different churches to see so much.  Here it’s all available under one roof at Segovia’s cathedral.

The castle-like Alcázar will wait for next time.  And then, really, we did start pedalling.