The Ihlara Valley is on many people’s short list of places to visit in Turkey.  For good reason.  It’s often considered part of Kapadokya (Cappadocia), but it’s a fair bit west of the main area of Kapadokya.  Ferda and I had both been to Kapadokya before, once together, but neither of us had been to Ihlara or Güzelyurt before.

The excuse for this trip was to visit Ferda’s good friend, Yeliz, who moved with her husband and two kids to Kırşehir recently (for his work).  Kırşehir is a small provincial capital smack in the middle of the country, only about 100km north of the Ihlara area.  Few tourists make it to Kırşehir.  There’s not so much to see.  It does seem like a pleasant enough place to raise kids.  We enjoyed the beautiful park just across the street from Yeliz and Ozkan’s home. 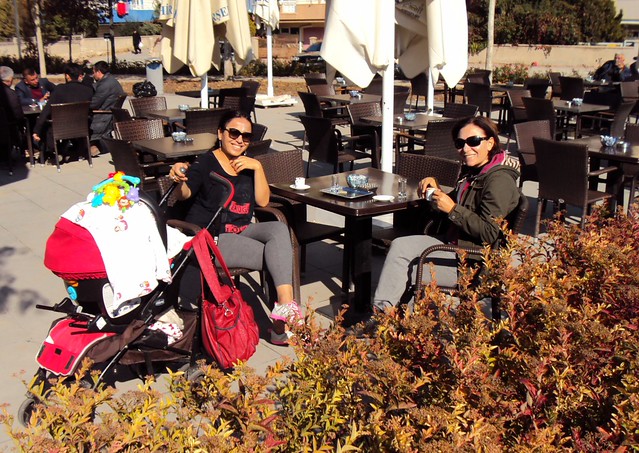 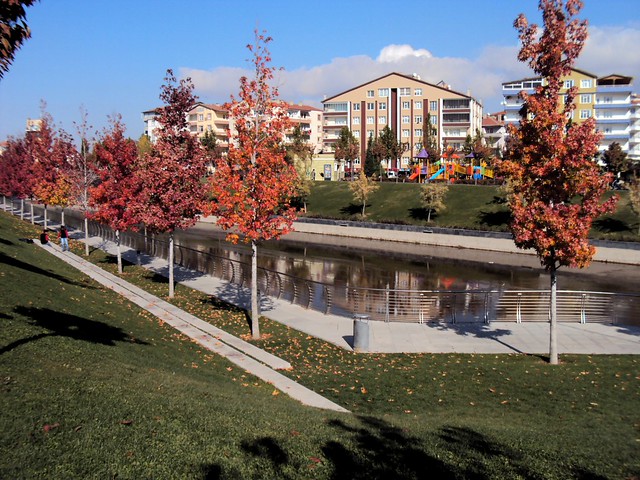 One day Yeliz suggested we get in the car and drive to Çağırkan, Kaman, where she had heard something about a Japanese garden.  Huh?  A Japanese garden in the middle of Anatolia?  What’s up?  This part of Anatolia is famous with archaeologists for its höyük (or tel or tell), artificial mounds left over by years of civilizations.  Archaeologists dig into these höyük and learn all kinds of things, and in this part of Anatolia archaeologists find 5000 years of history.  Alacahöyük in Çorum and Çatalhöyük in Konya are quite famous (and have longer histories than what’s found in this area from my understanding).  Near Çağırkan is Kalehöyük where the Middle Eastern Cultural Center in Japan has been excavating for over 30 years.  During that time they’ve constructed a fantastic museum in Çağırkan to educate the public about their findings and also built “one of the largest Japanese style gardens outside of Japan”. 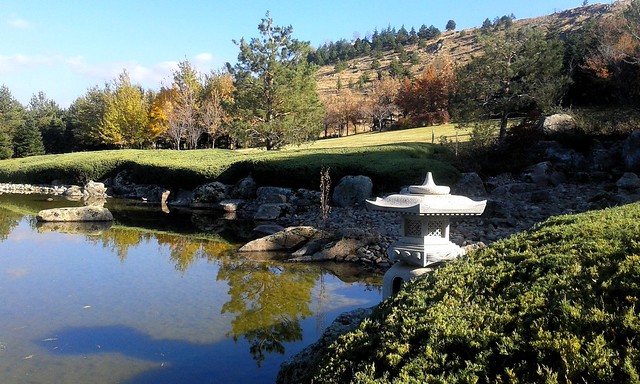 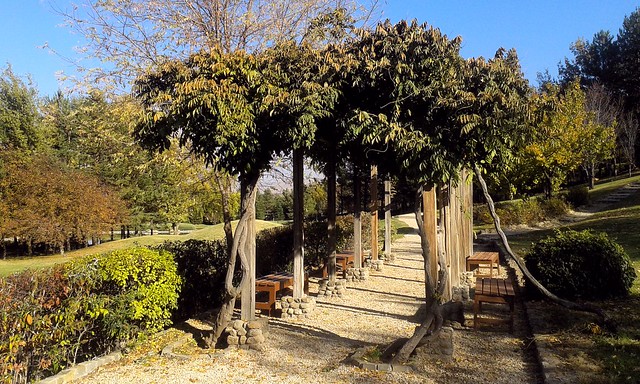 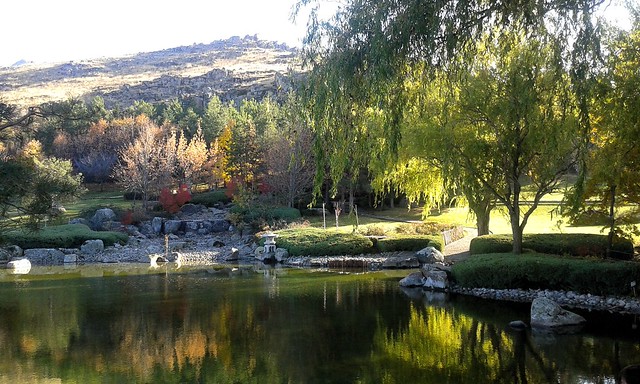 You never know what you’re going to find…  I left Kırşehir one day before Ferda did for the trip to Ihlara because I went by bicycle.  The route was mostly flat with lots of sugar beets, but I also found sheep, an old bridge, a caravansaray, an underground city, and even another cyclist!  It was Romain from Briançon (I cycled through there once!).  He carries his paraglider with him and had just flown the day before near scenic Hasan Dağı.  Crazy man.  He plans on spending the winter in Isfahan and heading to Central Asia once the weather warms up. 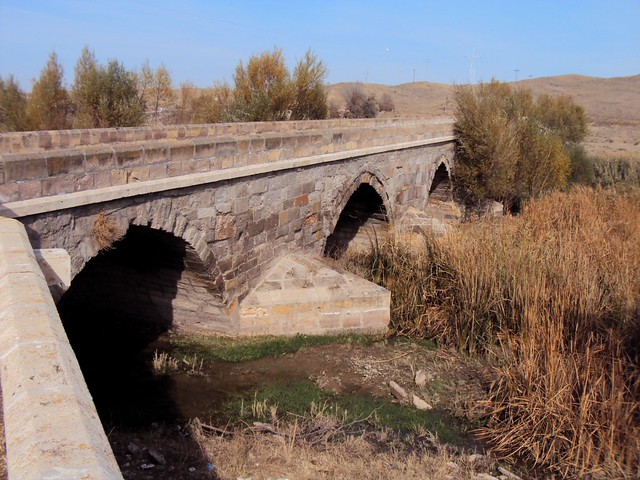 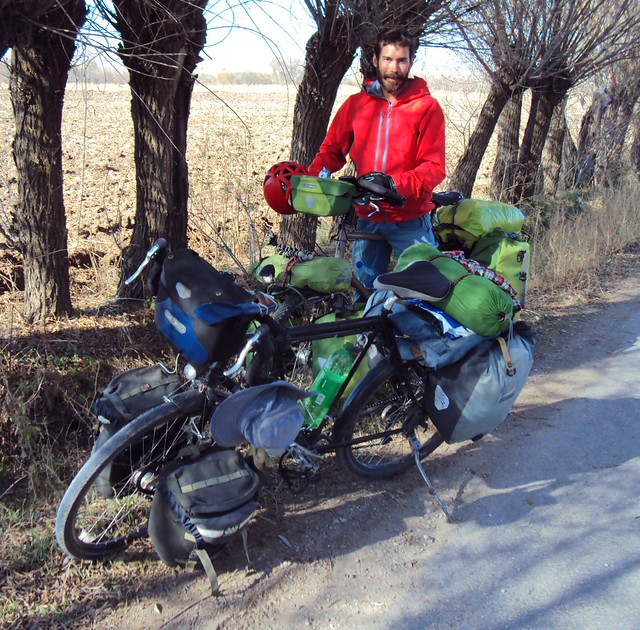 Ihlara and Güzelyurt, like the main part of Kapadoyka, are famous for their carved churches, pretty canyons, eroded rock formations, and generally good scenery.  We were not disappointed.  Ferda and I spent two nights at a hotel in Ihlara.  On our first day we walked from the hotel to Selime via Ihlara Valley, a full day excursion.  We visited at least 10 churches that day, mostly from the 9th to 12th centuries.  If there’s anything to be disappointed about, it’s the quality of the church frescoes as some of the graffiti and vandalism is clearly fairly new. 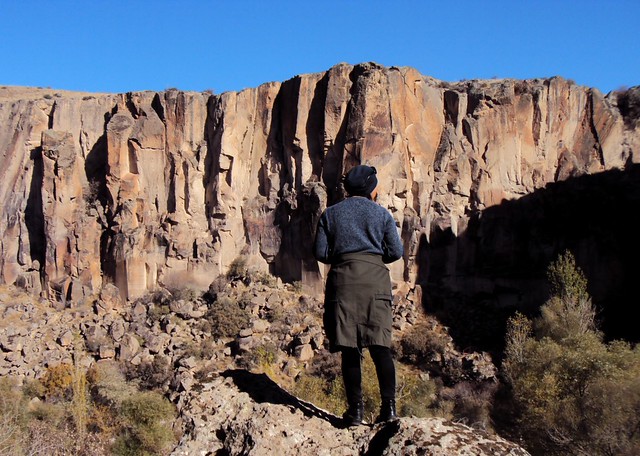 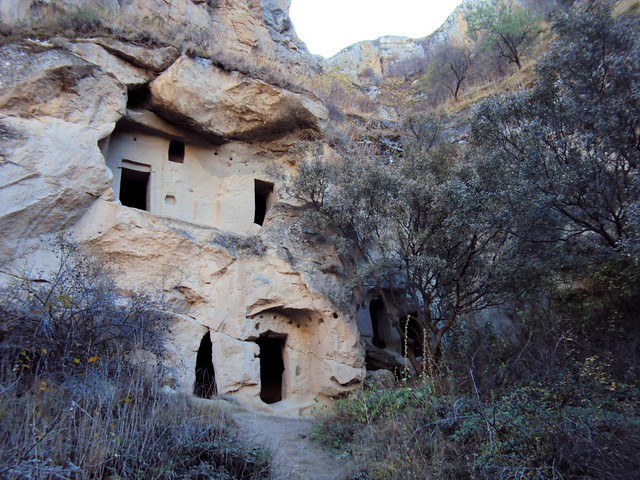 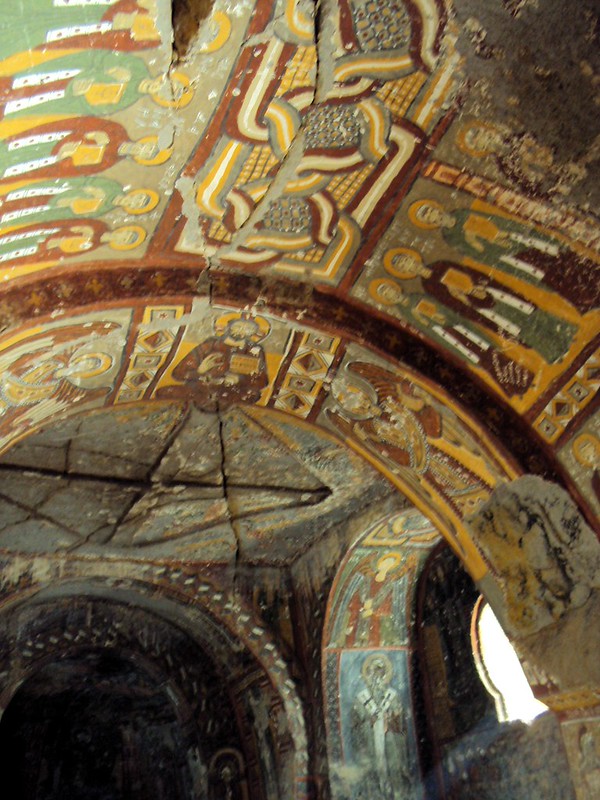 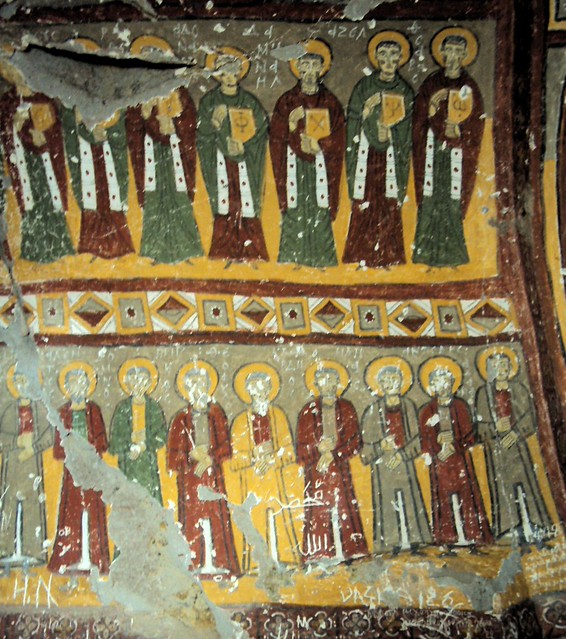 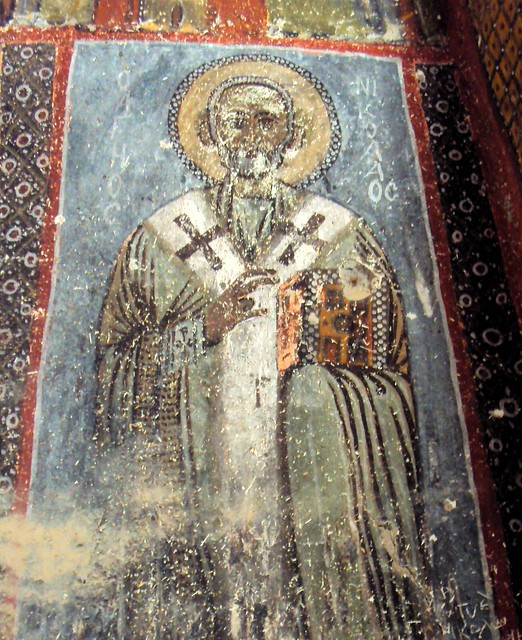 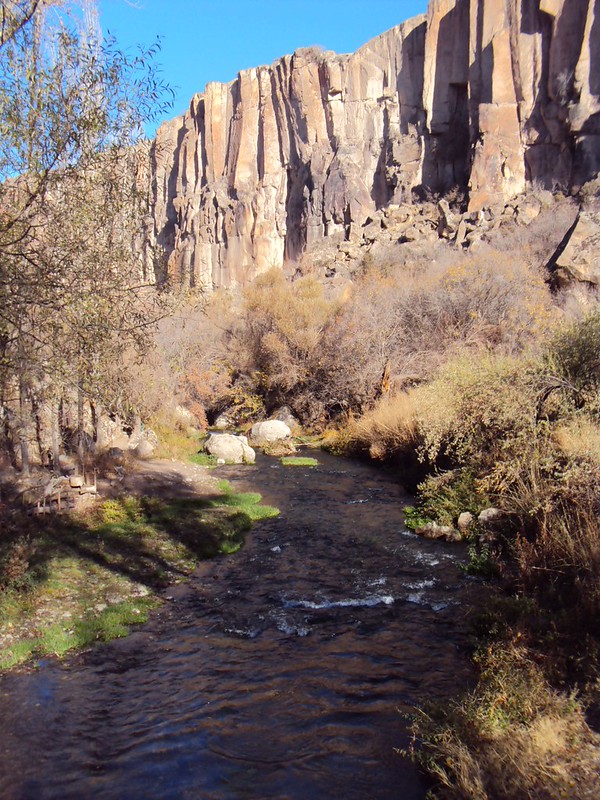 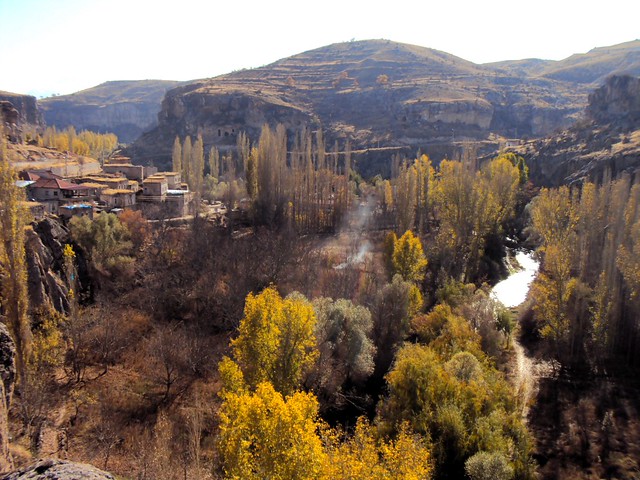 The canyon’s a great combination of history, beautiful views, and pleasant walking.  For most of the day we had the canyon and churches to ourselves.  The canyon widens out at Selime, spectacular in its own right, and a bit more crowded with tourists because of the easy road access.  We were able to quickly hitchhike back from there to our hotel in Ihlara. 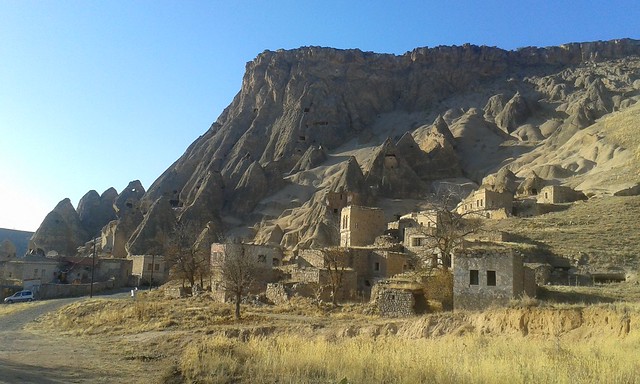 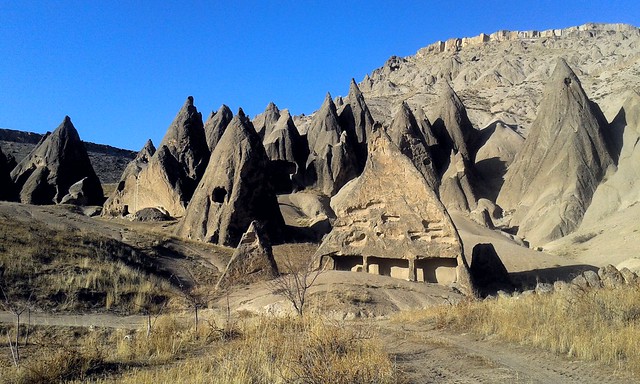 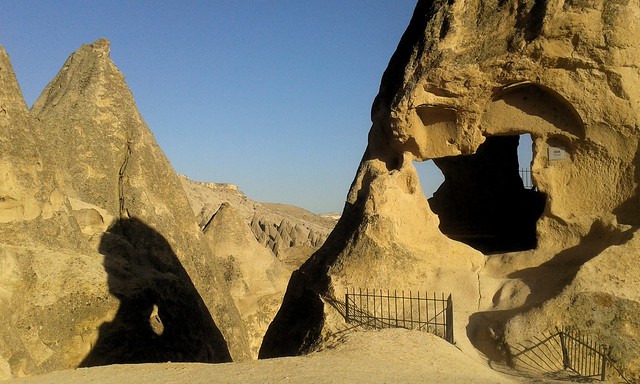 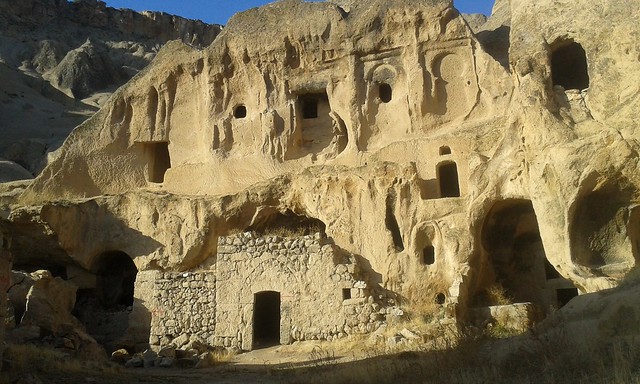 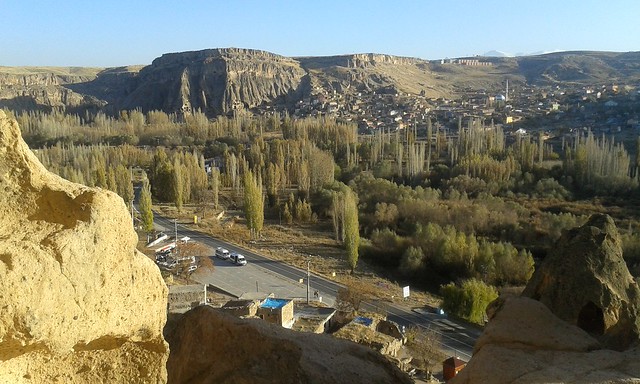 Apparently most tourists visit this area on a day trip from the main part of Kapadokya, but that’s a lot of time in the car in one day.  Also, this area certainly deserves two days (at least) as we found the next morning.  Ferda wanted to get an early afternoon bus from Aksaray back to Antalya so we got an early start to explore Güzelyurt.  This photo was taken right from our hotel: 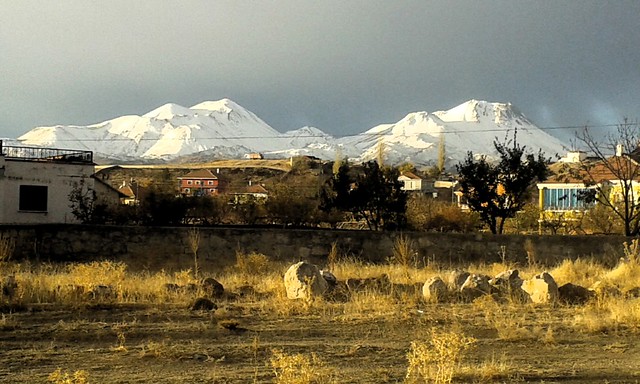 Again we had to hitchhike to get from Ihlara to Güzelyurt.  Transportation is a bit of a problem in this area.  We had the same problem in the main part of Kapadokya as well.  Having your own wheels doesn’t always solve the problem, since, e.g., we walked from Ihlara to Selime the day before and then needed to get back to Ihlara.  The hitchhiking, however, was quick and easy. 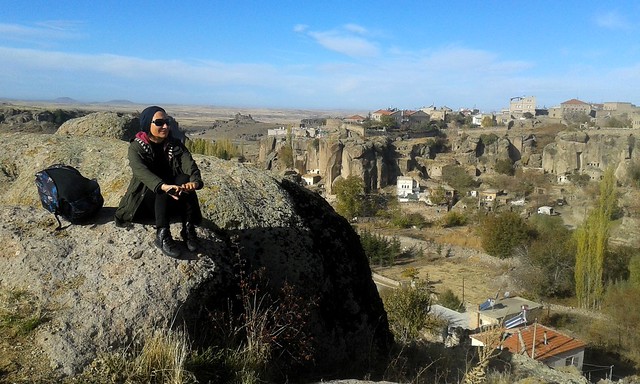 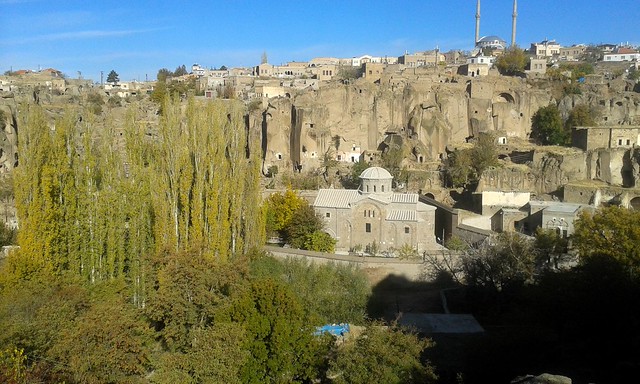 with this view behind her: 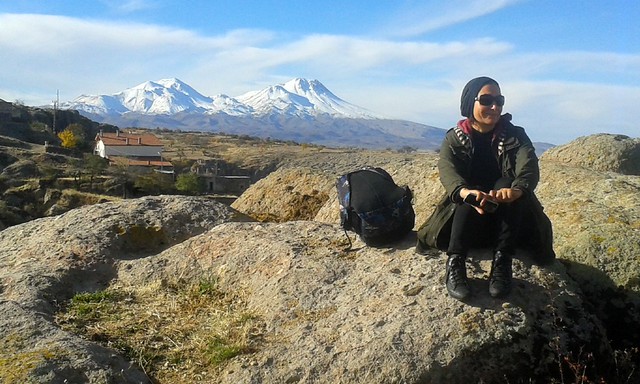 Aptly named, I’d say.  The valley starting here is called Monastery Valley, and we saw a few more churches and a few more frescoes before it was time for Ferda to catch the dolmuş to Aksaray for her trip back to Antalya. 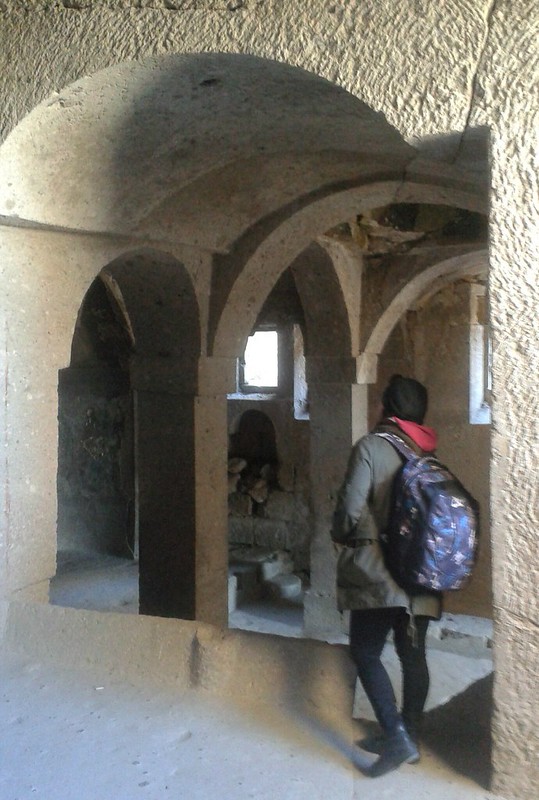 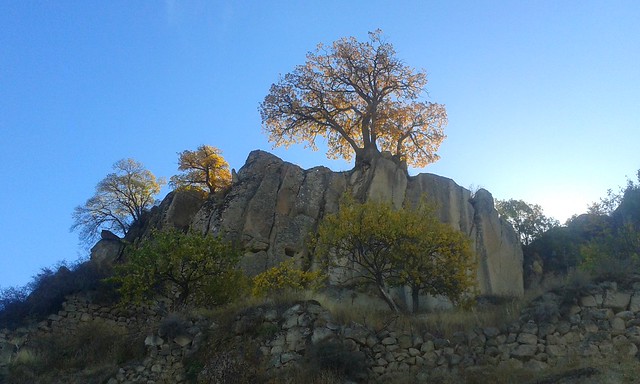 She was back in Antalya that evening.  Stay tuned here for another bicycle mini-adventure across the Konya plains and over the mountains back to the Mediterranean. 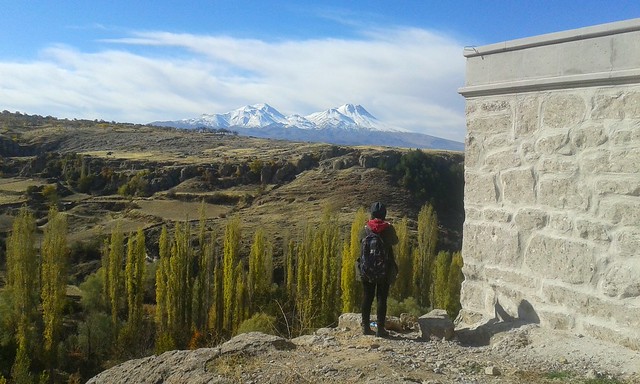 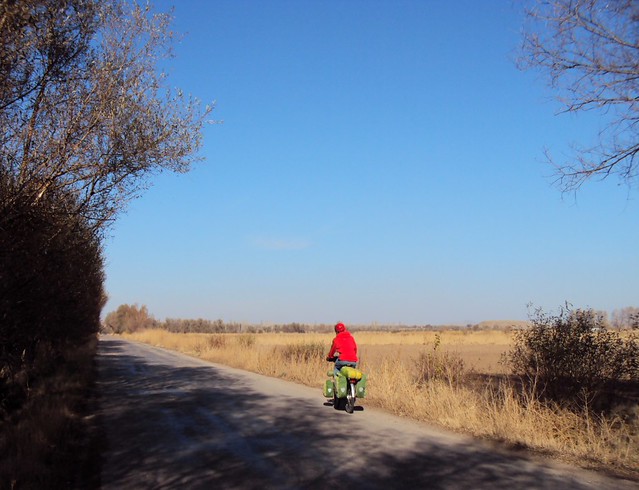