Muscat to Al-Ashkharah, an inland route

You can read on the internet lots of blogs from bicycle tourers who love the touring in Oman.  This isn’t going to be one of them 🙁  The weather is certainly perfect for riding in the winter, but the traffic is heavy.  Perhaps Jack and I started with unreasonably high expectations after reading the glowing accounts from fellow cyclists.  We found lots of new construction of buildings and highways and the associated noise, dust, and ugliness that comes along with it.  Sadly the sprawling, auto-centric development will not make the country a nicer place to live or visit even when the construction disturbances are over.

Another reason that Jack and I might have arrived in Oman with unreasonably high expectations for our tour is because the previous tour we did together — five years ago in southern Mexico — was one of the best five-week bicycle tours I’ve done.  I highly recommend the touring in southern Mexico.  Oman, however, well…

Jack and I met in Muscat at the house of a warmshowers host, Stuart, who does “ultra” bicycle racing, sort of like brevet but timed as a race.  It sounds crazy.  As I write this, he’s racing in the first ever of this type of event in the Middle East, a 1000-km five-day event in Oman.  Stuart will cover more distance this week than Jack and I did during our entire month in Oman! 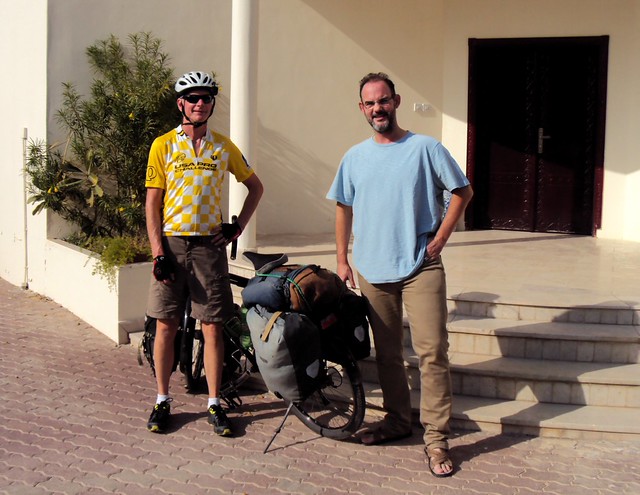 One of the tourist highlights in Oman is to visit the Wahiba Sands (aka Ash-Sharqiyah), a huge area (70km x 150km!!!) of sand dunes 150km SSE of Muscat.  Oman’s the size of Germany with a population of less than 3 million so I (wrongly) wasn’t worried about traffic anywhere in the country when planning our route.  Jack and I started in Muscat and took the main inland route towards Wahiba Sands.  Once we finally got away from the nasty traffic (~200 km south of Muscat?), it was wind that drained our energy and spirits for the next week.  The wind got so bad that we holed up in a hotel in Al-Ashkharah for a couple nights.  I think we needed a rest — both mental and physical — by that time anyway.

Of course, it wasn’t all bad, and I’ll focus on the positive, starting with spending the night in the Wahiba Sands for my birthday.  As biking in soft sand is nearly impossible, we hired Ali and his 4×4 to drop us off in the dunes and come back in the morning to retrieve us.  He said he knew a good spot, and indeed he did.  In spite of a bit of wind (and blowing sand), we were very happy with this excursion. 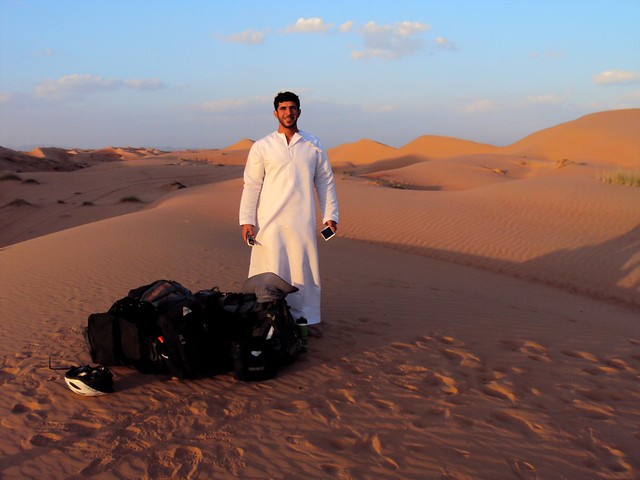 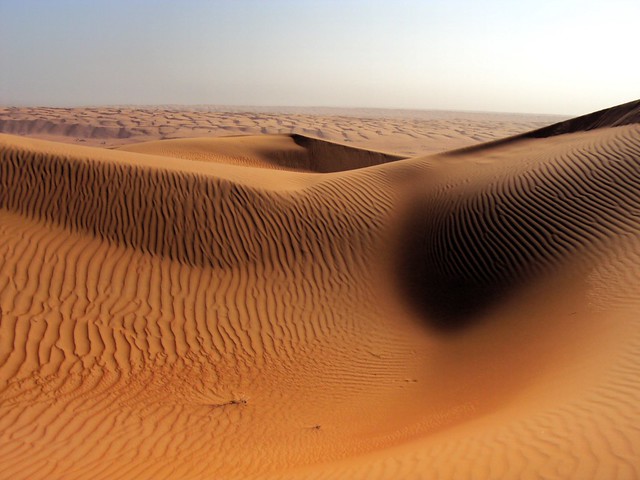 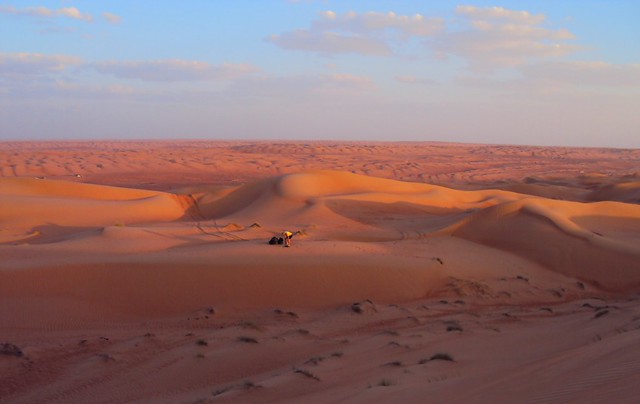 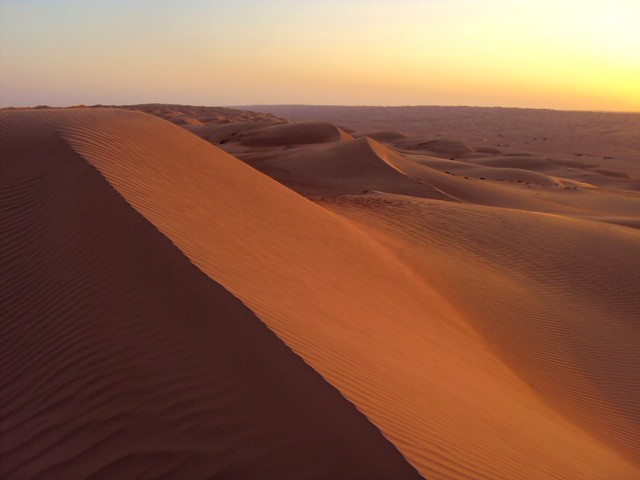 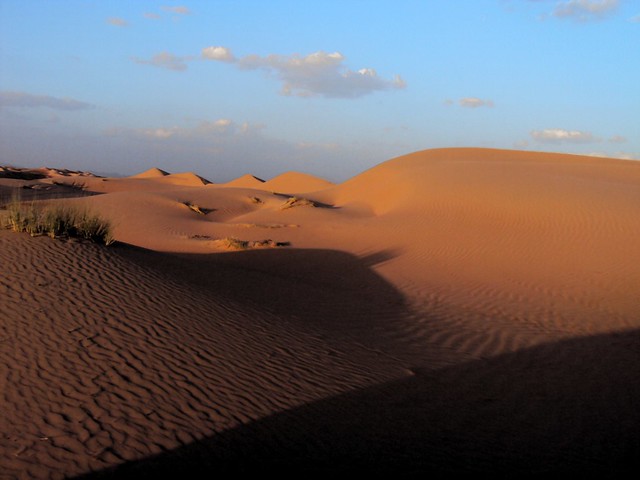 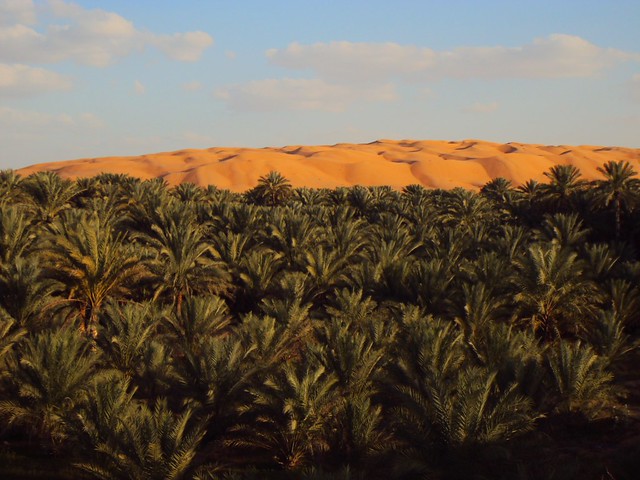 Another of the tourist highlights in Oman is to visit forts.  Indeed there are so many forts that our guidebook even warned of “fort fatigue”.  However, without much else to see besides beautiful desert scenery, as slowly moving bicycle tourists, we always welcomed the forts as a nice break from the road.

The first fort we visited was this small one in Al-Yahmadi: 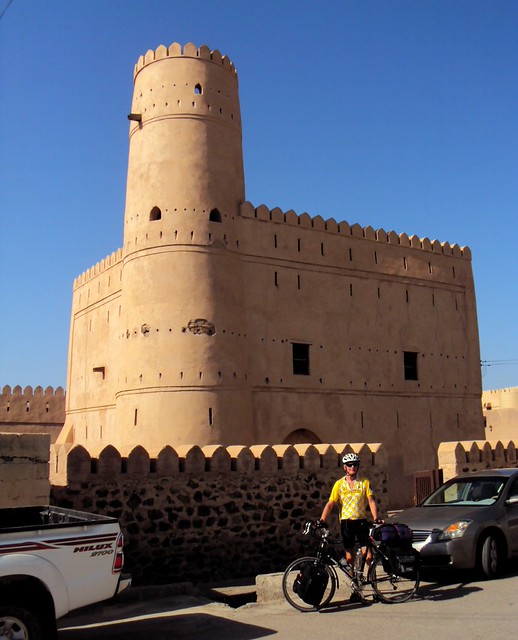 After we walked around a little, a few older Omanis there invited us to sit down with them and share dates and coffee.  Omanis are warm and gentle, and we experienced firsthand their dates and coffee hospitality a number of times. 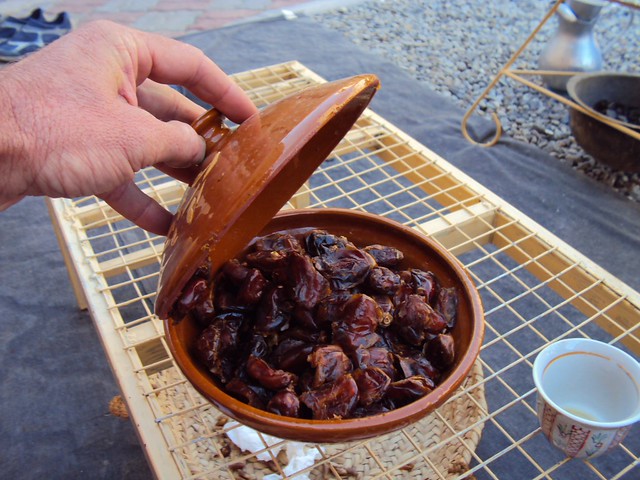 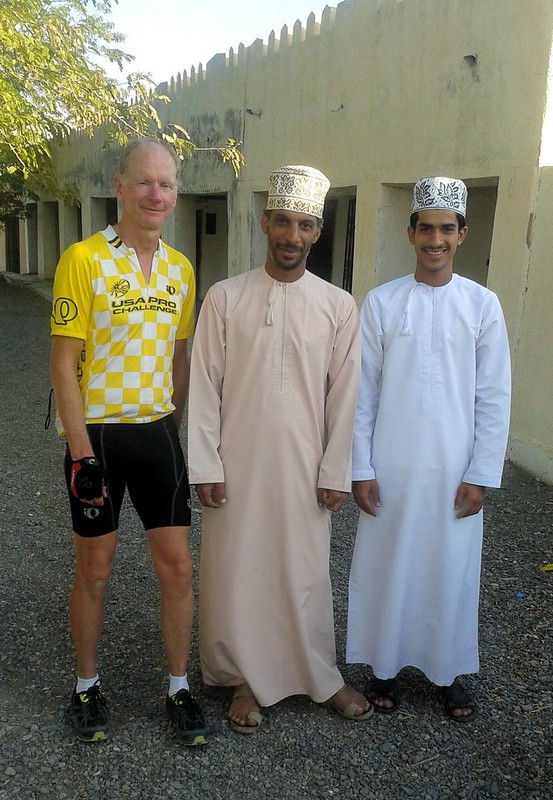 Our second fort was the one in Al-Kamil, restored and turned into a museum: 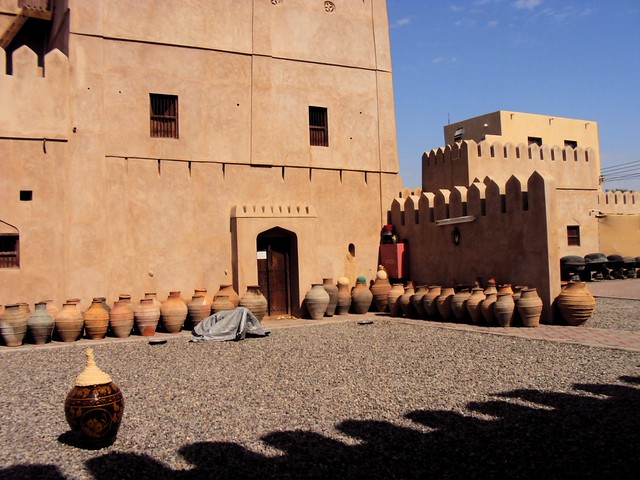 The highlight there, however, was just outside the fort at the falaj.  Oman is famous for its covered irrigation ditches, locally known as falaj.  The falaj are mostly used to irrigate the date palm oases (hence the dates!), but the water is used for washing as well, of course.  At certain places the falaj are open, allowing access.  Our guide at the fort, Wafaa, directed us to one of these bathing places, and Jack and I washed up in an Omani falaj, one of the highlights of the trip! 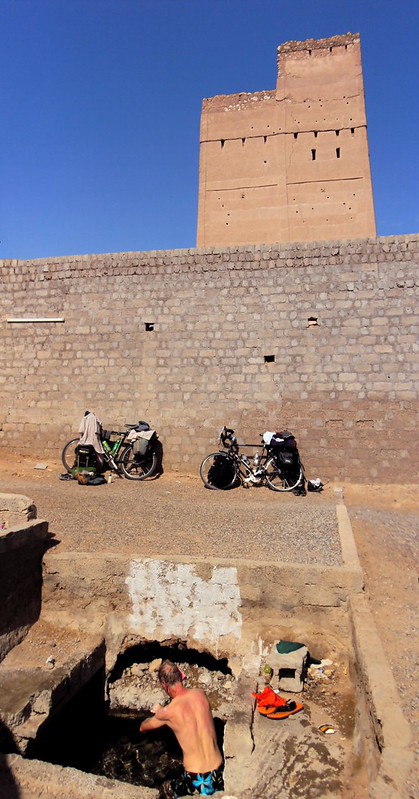 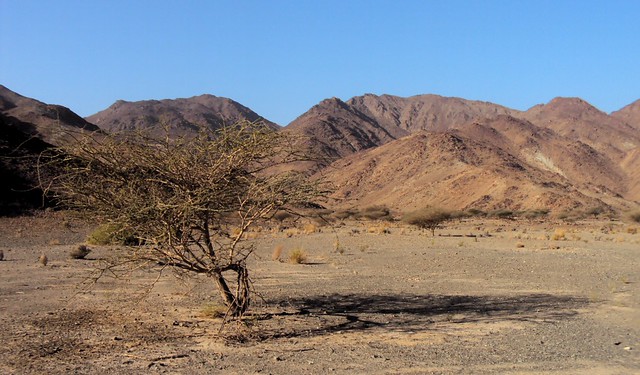 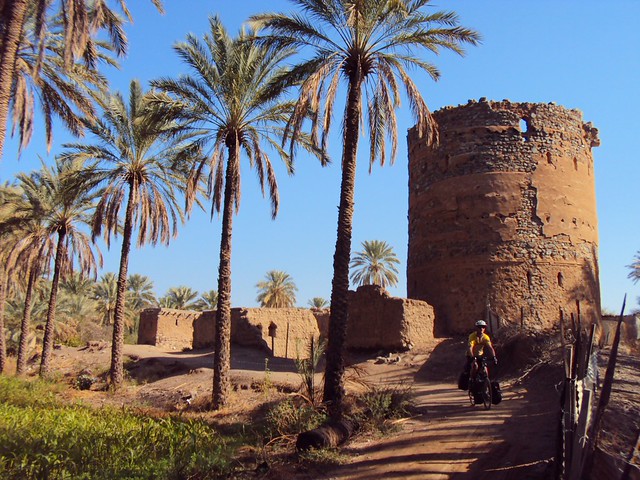 The forts can be so well restored that they have a Disneyland-like feeling.  This one in Ja’lan Bani Bu Hassan reminded me of the castle in Olite in the foothills of the Pyrenees. 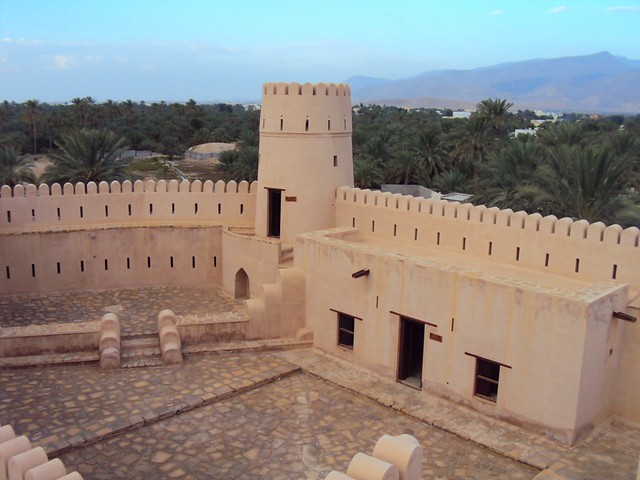 It was fun to visit an unrestored fort just down the road in Ja’lan Bani Bu Ali: 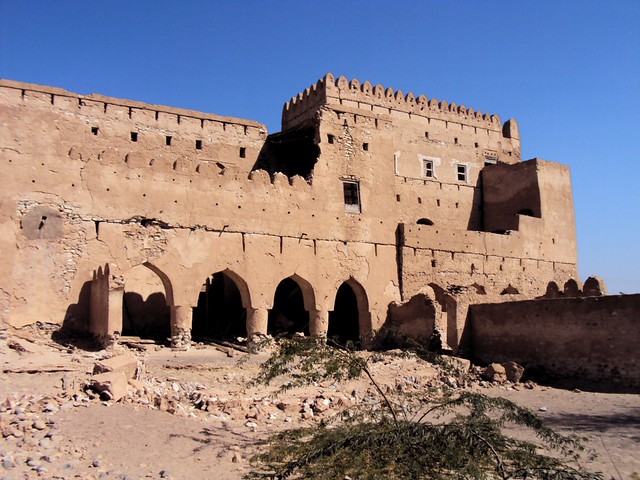 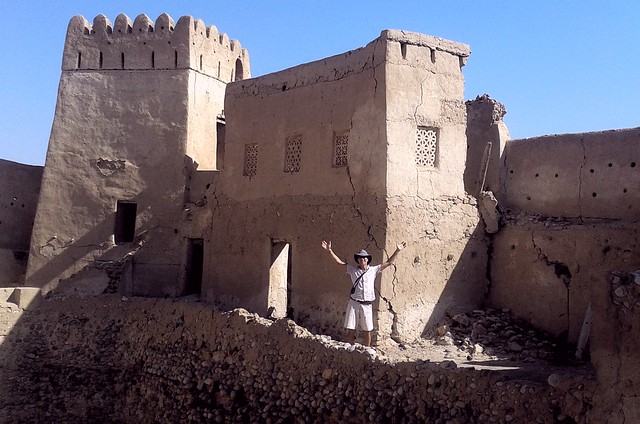 The mosque in the same town looks more like a Turkish hamam from the outside than a mosque: 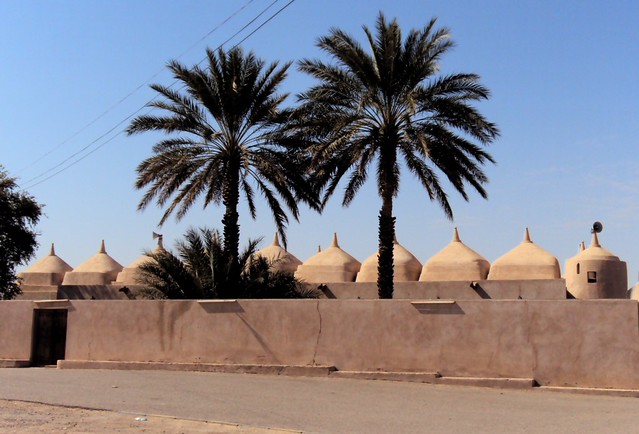 It felt ironic that once we finally got onto roads with less traffic, we were greeted by high winds and blowing sands, giving the day an apocalyptic feeling:

However, that night in Al-Ashkharah we had what turned out to be the best meal of the trip: Australian beef on skewers with lots of fresh Bangladeshi chapatis. 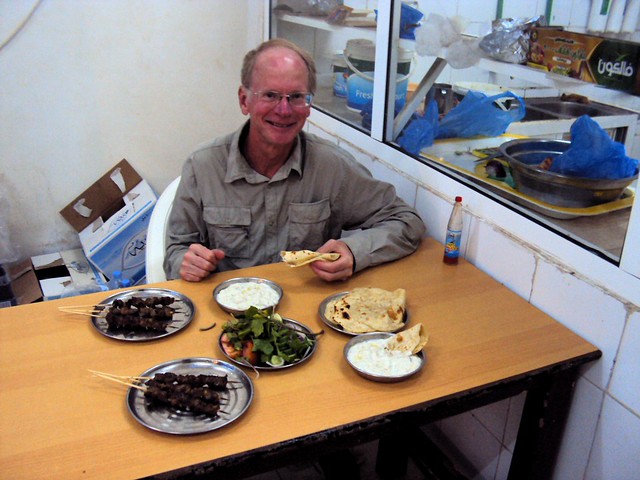 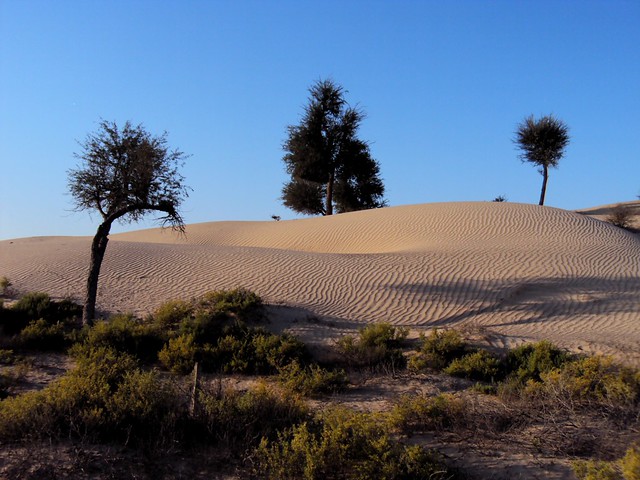 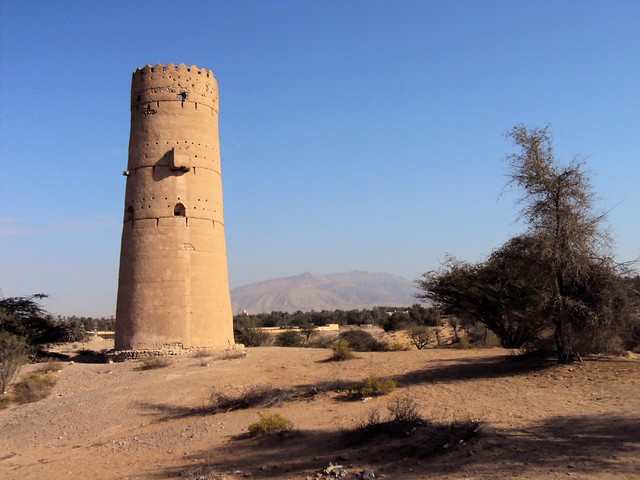 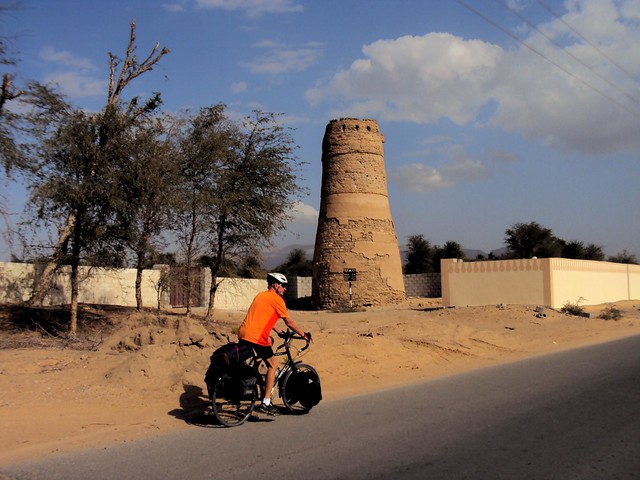 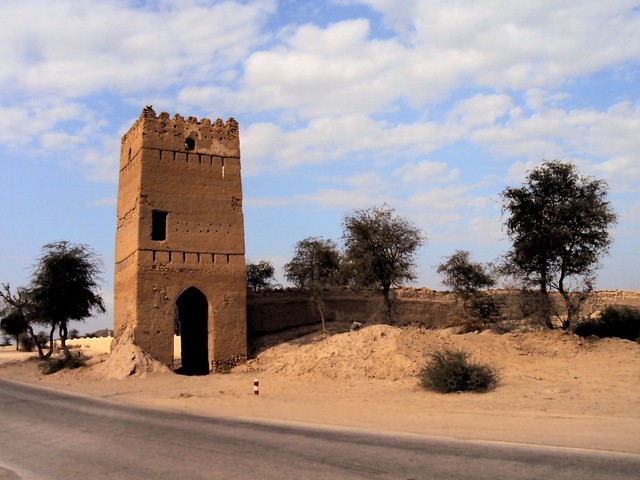 2 Responses to Muscat to Al-Ashkharah, an inland route